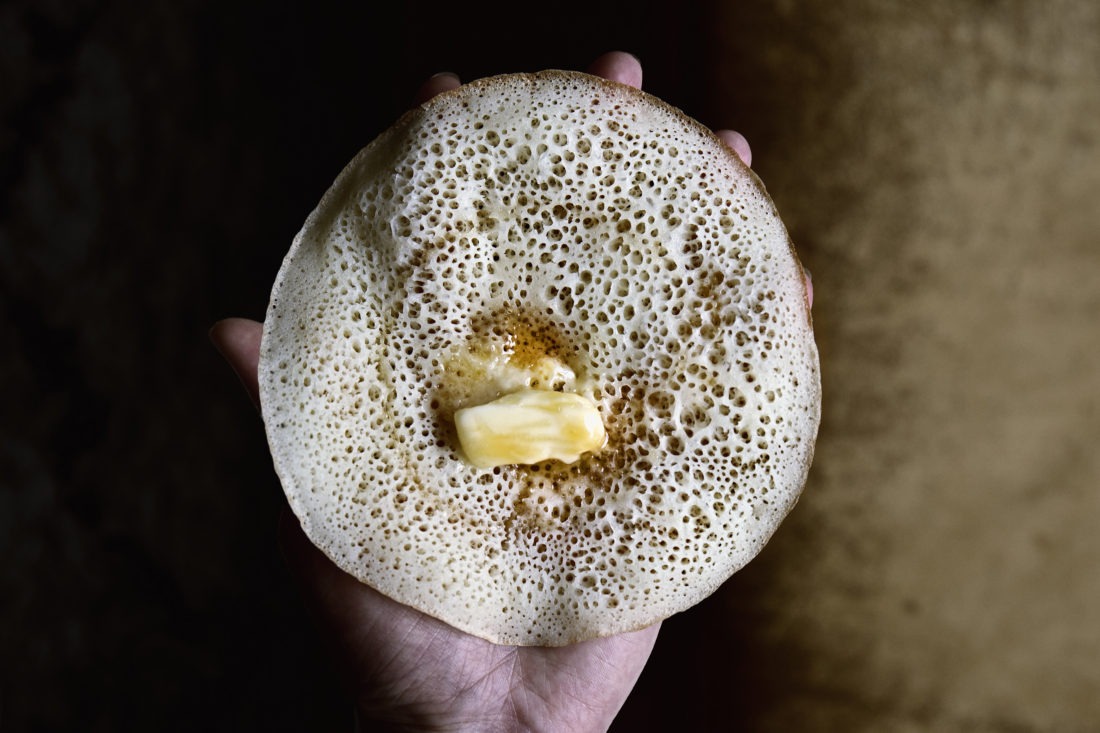 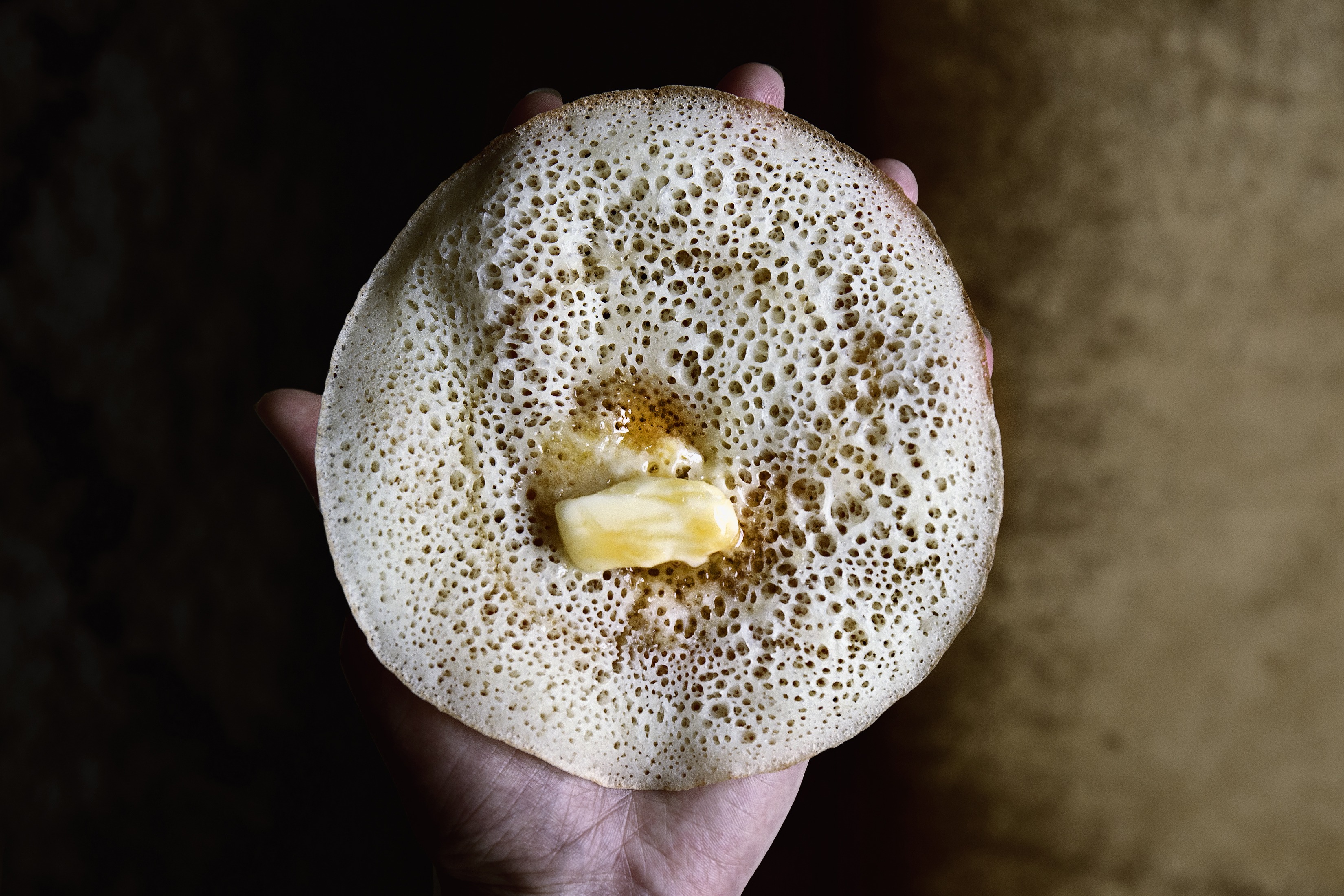 Long been a destination on my bucket list – and one that had taken us way too long to fulfill – we finally visited Marrakech in December 2018.  I sort of did and didn’t know what to expect.  A dancing mirage somewhere in between the Atlantic Ocean and Mediterranean Sea, the face of Marrakech carried mysterious, exotic and imaginative beauty in my mind, like a place only in story books, almost unreal.

But of course, in reality, Marrakech is anything but unexposed.  We arrived to find an ancient city, like all the others of her kind left only with the pillars of tourism industry, whose beauty, flaws and dignity are laid bare for the world to entertain with.  Her plastered skin glowing in pink and orange, her sometimes unequivocal display of chaos and neurosis, and her remedial serenity and reflective pools inside the earthen walls of her beautiful courtyard houses, all of which was once for herself, now all is but a reluctant theme park for foreign passers.  This could be a difficult dilemma for any city, especially a poor one like Marrakesh, where her livelihood brings out both the best and worst she has to offer.  Within the walls of Medina, it could feel like a pressure cooker of transactions.  A request for directions, a photograph, a helpful hand, all of which seemed to need to become an exchange for euros, or worse, extortions.  And there she stood in the backdrop, her face blushing in that beautiful gradation of earthy red hues, I wondered, if in sadness or apathy.

That sounded negative.  For that I apologize, for who am I to lay judgment in my brief and shallow crossing with a city that is obviously complicated, and made our trip sound unenjoyable which it definitely wasn’t.

If you wish to enjoy Marrakech, in my experience, you have to choose a great riad to stay in.  Riad is traditional Moroccan courtyard houses, but nowadays, mainly known as a synonym for Bed & Breakfast.  Your riad is where you retreat from the outer disorientation and intensity, where you find conversations beyond bargainings, where it could feel like a temporary family even just for a few days.  And most importantly for us, where the foods were great.  When it comes to street foods, to be utterly honest with you, I wasn’t too impressed, at least inside the walls of Medina.  We tried our best to avoid obvious tourist traps and focused on old establishments favored by mostly locals, but nothing stood up to the promise.  On the third day, out of search-fatigue and the promising aroma lurking out of the kitchen every late afternoon that we could no longer ignore, we decided to stay in our riad for dinner at a more than reasonable pricing of 20 euros per person.  What was served to us that night, had single-handedly reversed our perception of what Moroccan cuisine could and should be.

The dinner started with a few small bites of cold appetizers, each nicely balanced in texture and flavors that eased our skepticism.  Then came a lightly spiced pumpkin soup that held so much more nuances of comfort than its creamed orange appearance suggested.  “Is this typical in Moroccan meals?” I asked the manager.  “Yes.”  He smiled in amusement.  “Pumpkin soup.”  Of course.  At this point we were sufficiently assured to not be surprised by any excellence that was not expected.  But the main course, a bubbling tagine of fork-tender beef stewed in gentle spices and dried fruits with the occasional crunch of heart-shaped almonds, blew us away.  It isn’t easy, I feel the need to point out, to cook foods that are unmistakably motherly and soft-spoken while standing up to all the required sophistication and depths one would expect from a paid dinning experience.  Whoever cooked this meal, has a rare gift, but it wasn’t until the next morning that I decided to find out who she was. 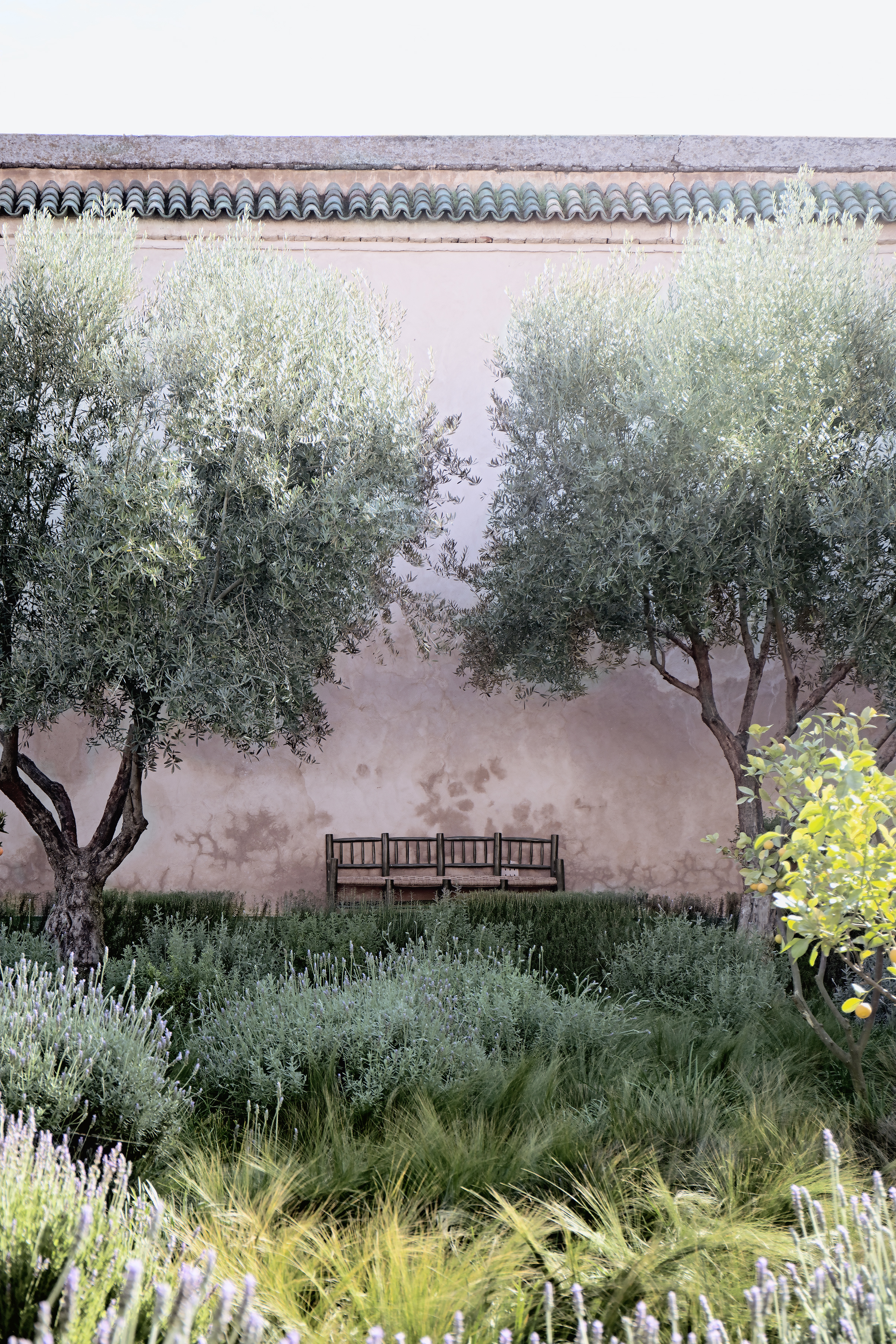 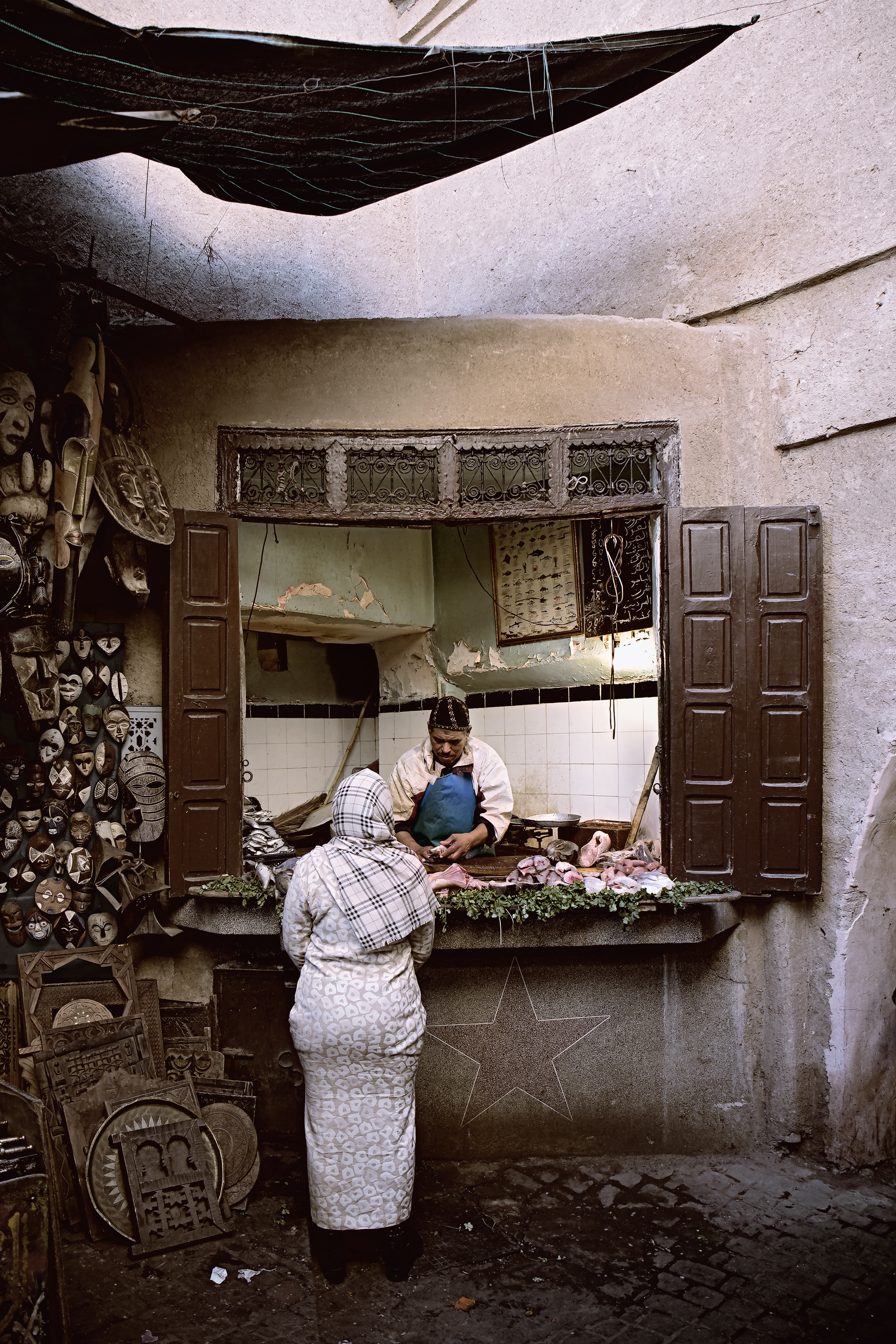 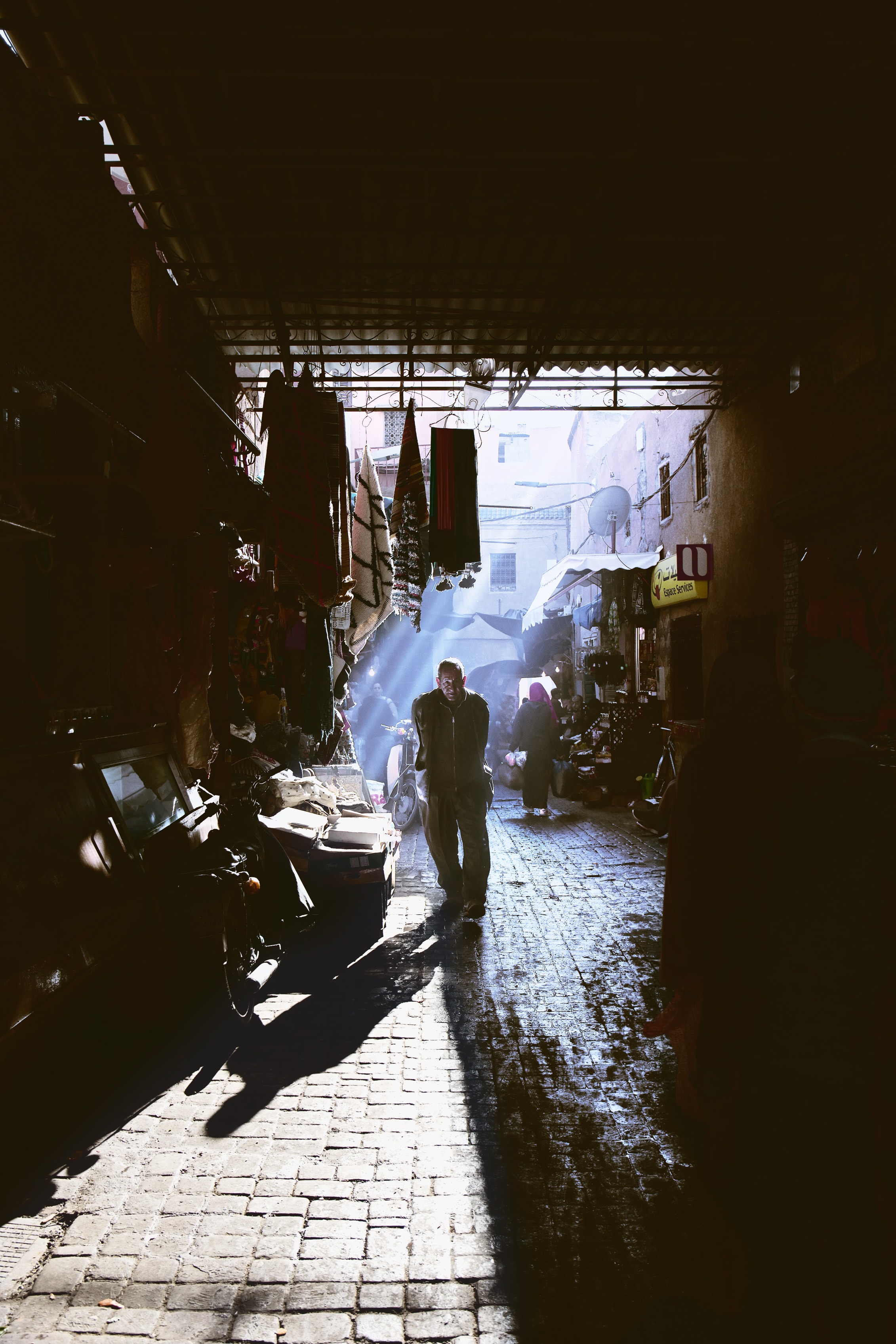 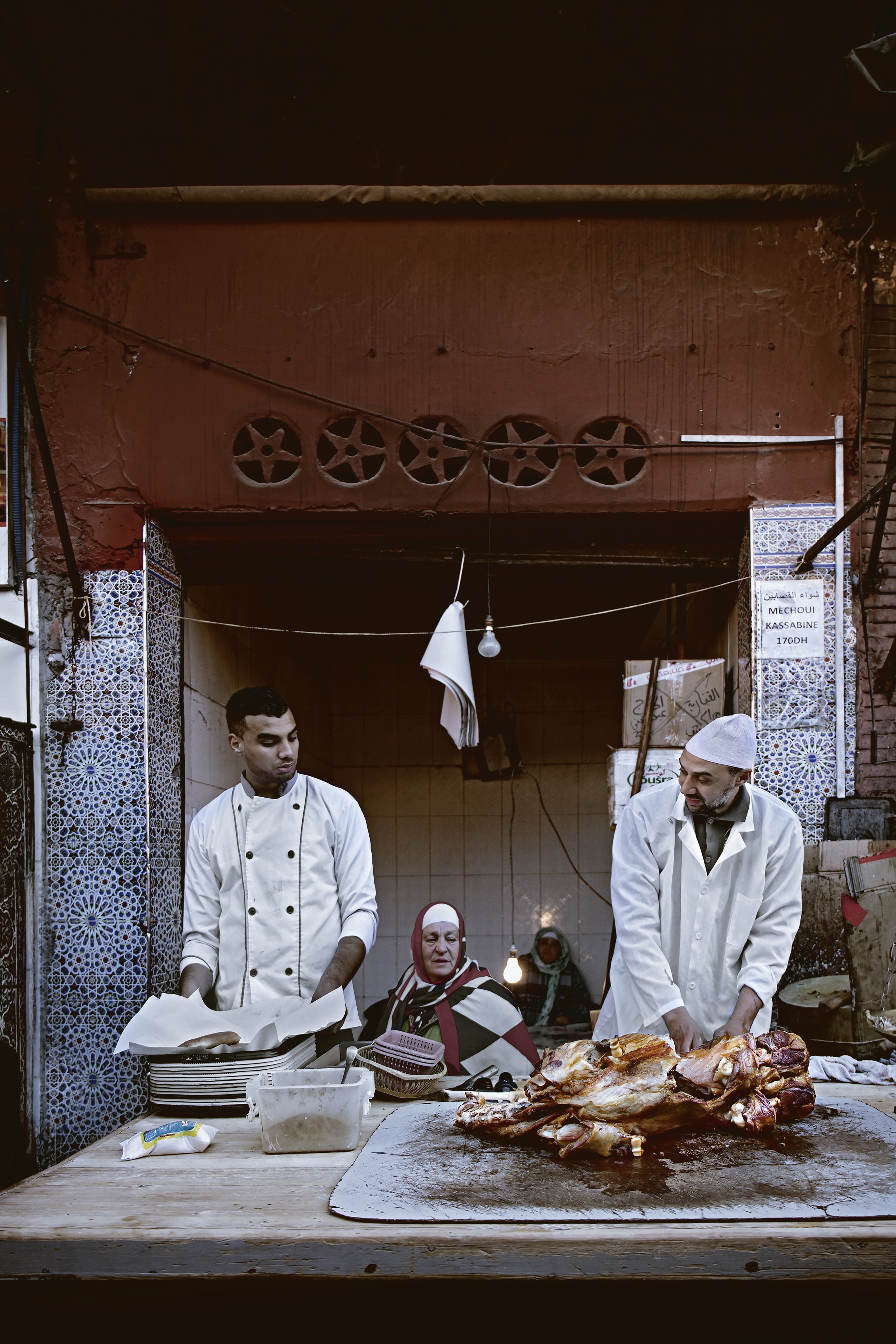 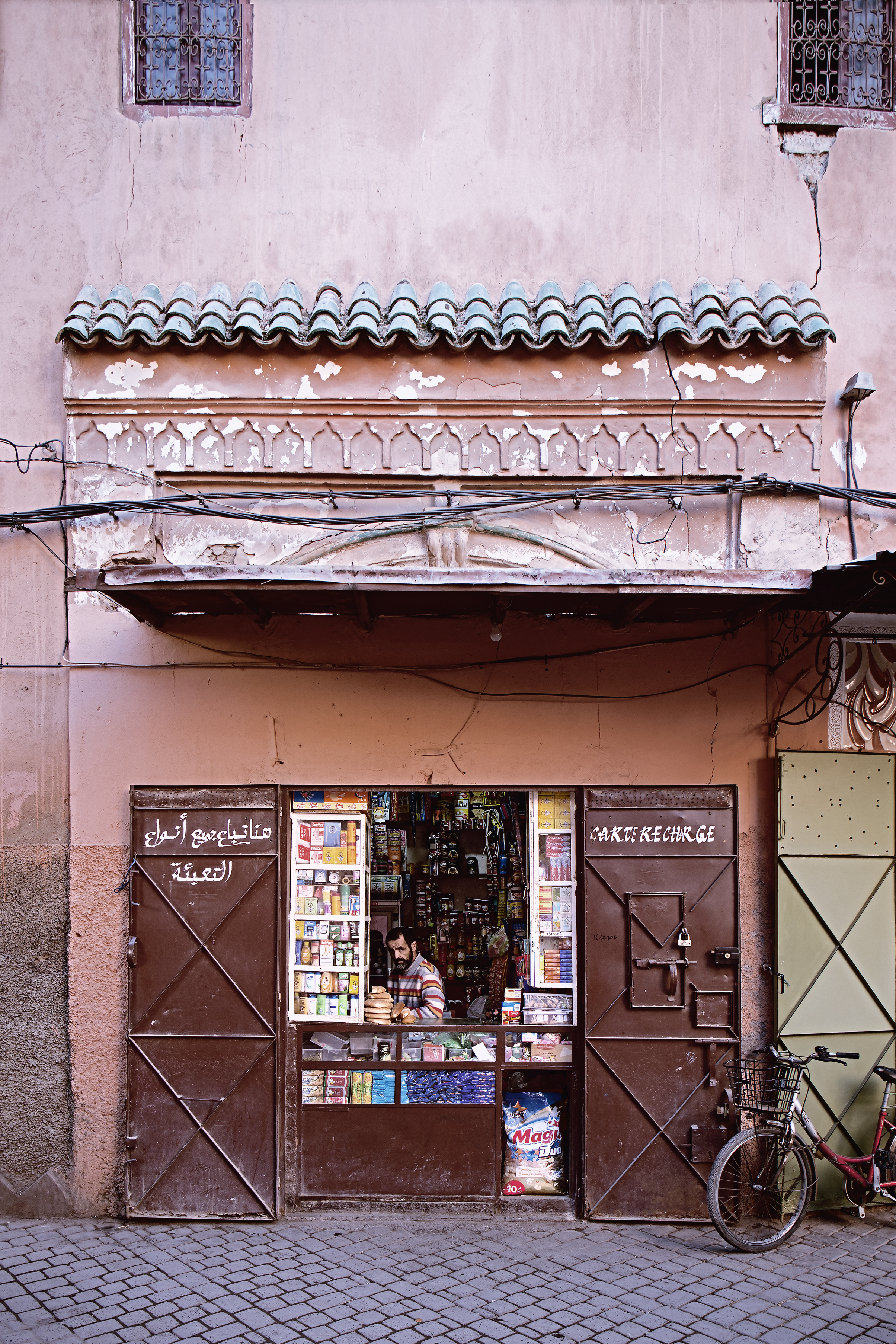 Sitting at breakfast on the rooftop in a sun-lit backdrop of blue and pink, was when I saw this.  A plate of baghrir.

You may not know what it is, you probably don’t.  But I did.  I did because this particular Moroccan yeasted pancake, had hurt me.  Yes, deep, like the boy in school who had maliciously broken your heart and left it to rot in humiliation, whom you would never truly forgive and forget no matter how many therapies and better relationships you’ve been through, the one whom you will always, always imagine to run into on the street in your upmost hottest self just so he could mope in regret.  That boy, that was my baghrir.  I came across its recipe many years ago online, lured by its exotic and mysterious profile, agreed to series of hookups in the kitchen so unsuccessful that left me in distress.  Mushy, textureless, with big scattered holes like the surface of the moon, and worst of all, no apologies whatsoever.

But this baghrir… this was a different baghrir.  Chewy, filled with delicate holes that trapped as much salted butter and honey as my conscience would allow, it was everything that I once thought was falsely promised to be.  I was never one to ask to intrude in a private kitchen, but this is about settling old debts.  I asked the manager to introduce me to their cook and a few hours later before our second dinner in the riad, Majda greeted me by her stove.

The kitchen was already intoxicated by the aroma of couscous that she was preparing for dinner, a dish that I once so foolishly thought to take minutes, was an ordeal that stretched for hours and through various procedures by her standard.  She could barely speak a word in English, and I spoke none in French and Arabic.  Nonetheless she walked me through the process of making baghrir, patiently, explaining not by precise measurements but details in intuitions and adjustments, uncompromising even in the slightest margin of inconsistency.  I already knew she was good.  And now I knew why.  Ten minutes of preparing the batter and an hour of fermentation later, I stood by the stove and watched the batter I just poured into the skillet fizzing enthusiastically in densely populated air bubbles, which then popped as the batter cooked and solidified.  It was one of the most satisfying cooking experiences I’ve had, and the baghrir was just as chewy and delightful as the ones I had in the morning.

Six months had passed since my Marrakech trip, and I’m glad to tell you that after a dozen batches of re-enactment from memory and obsessive fiddling, I now could finally bring Majda into your kitchen, too. 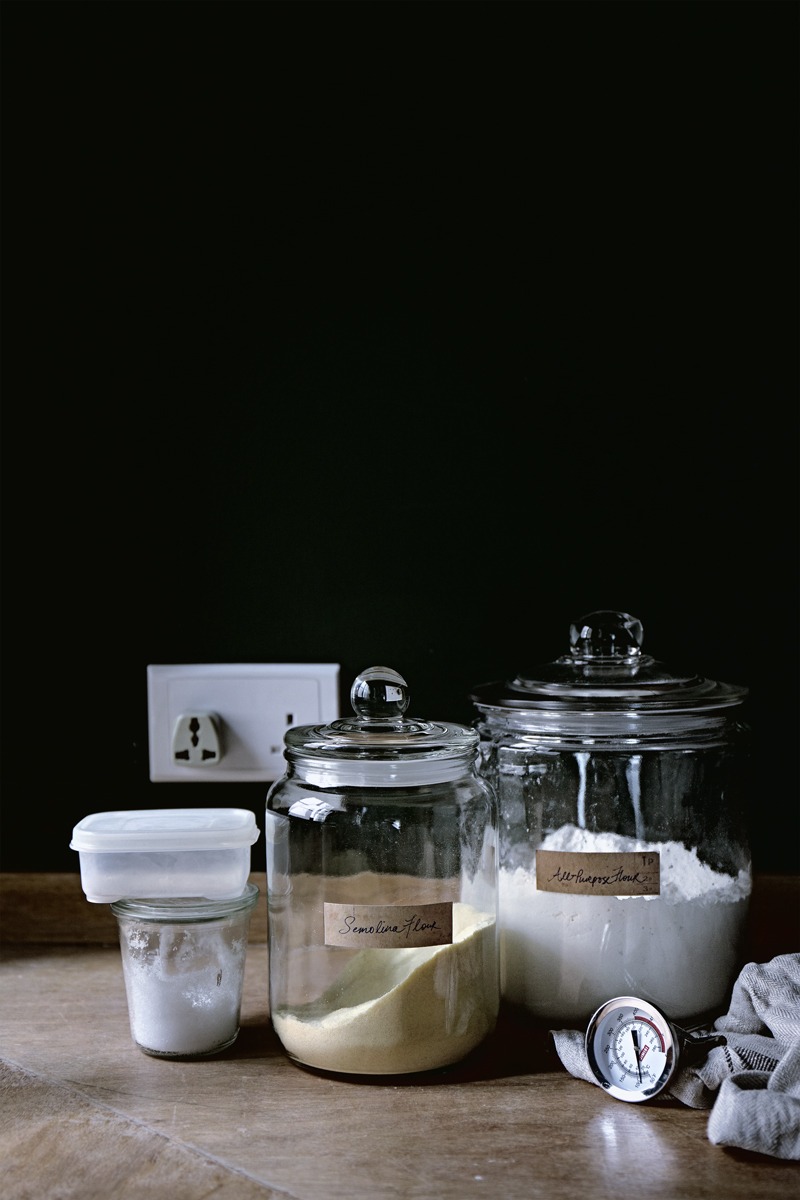 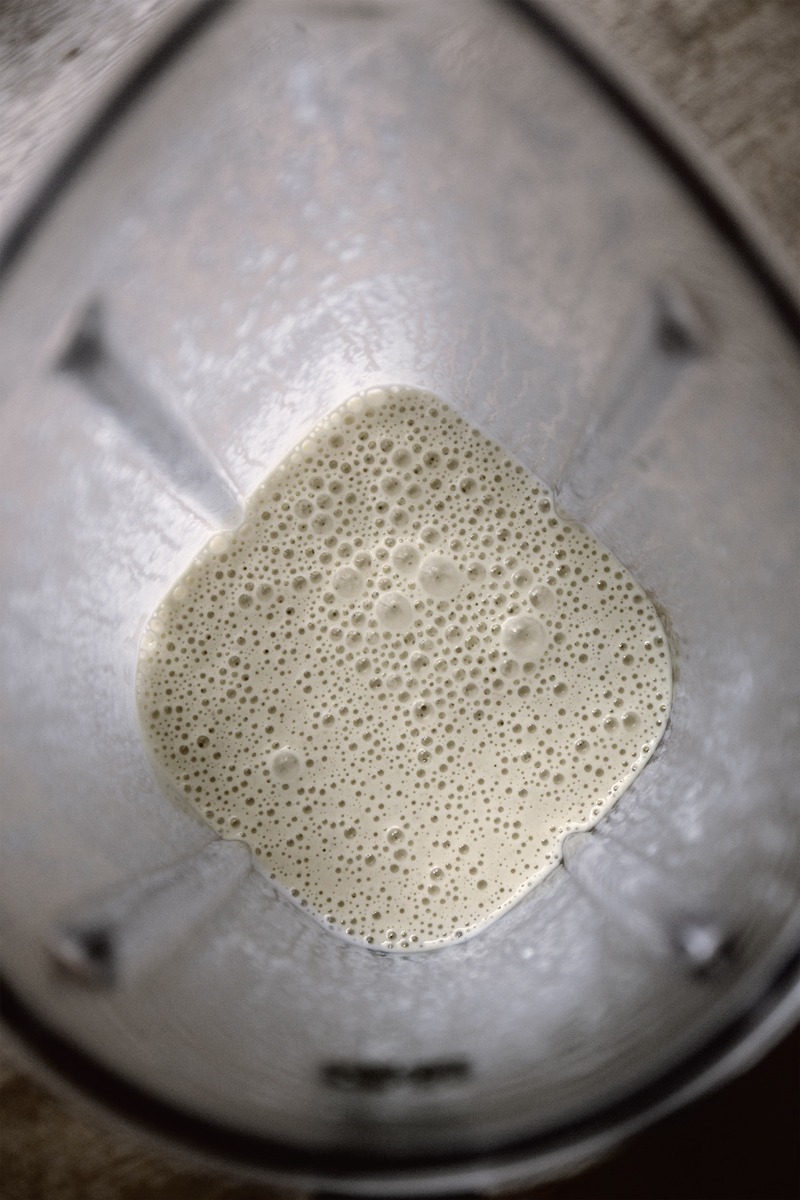 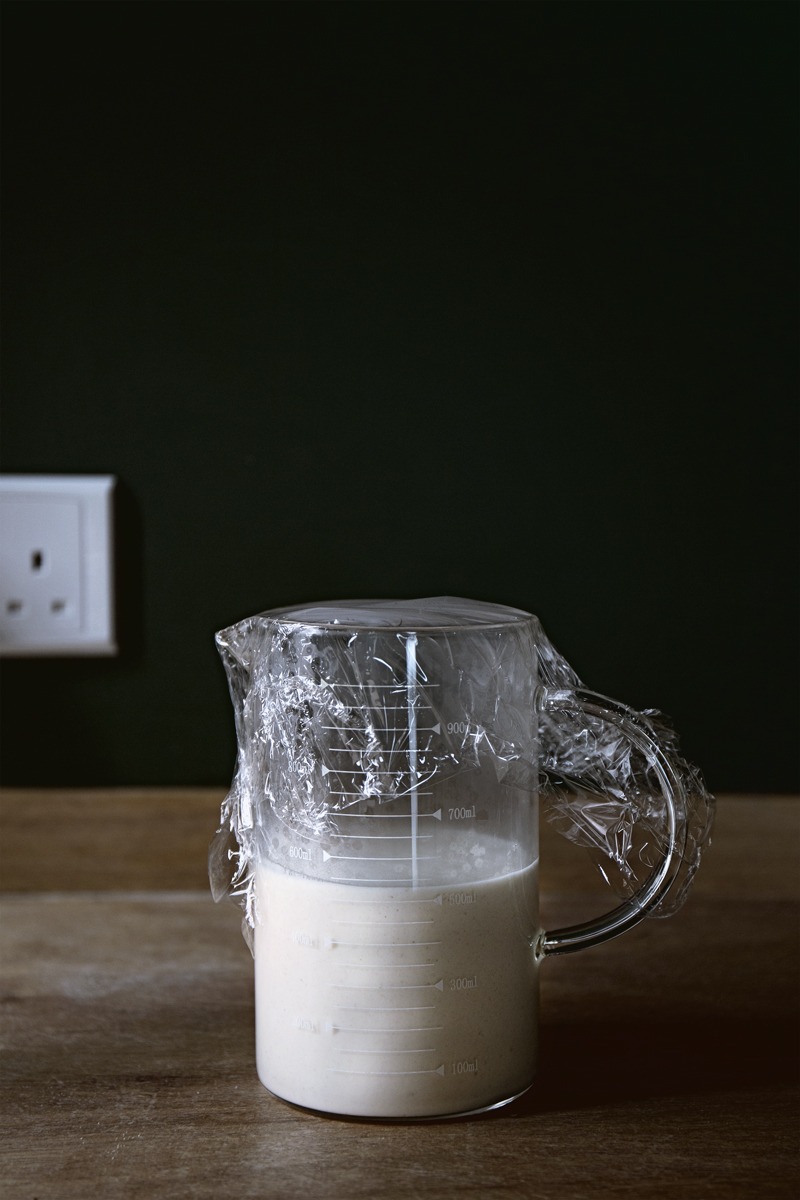 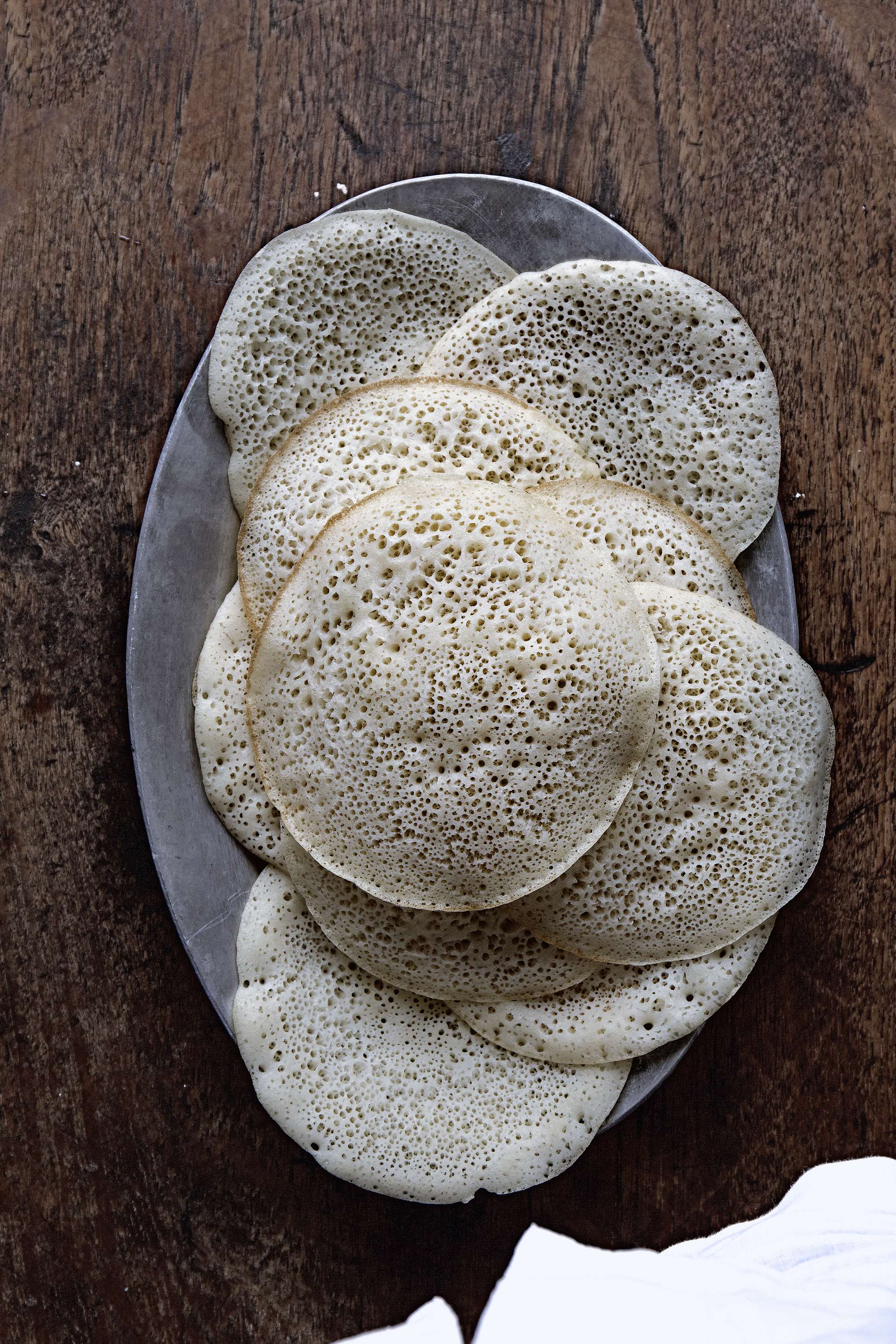 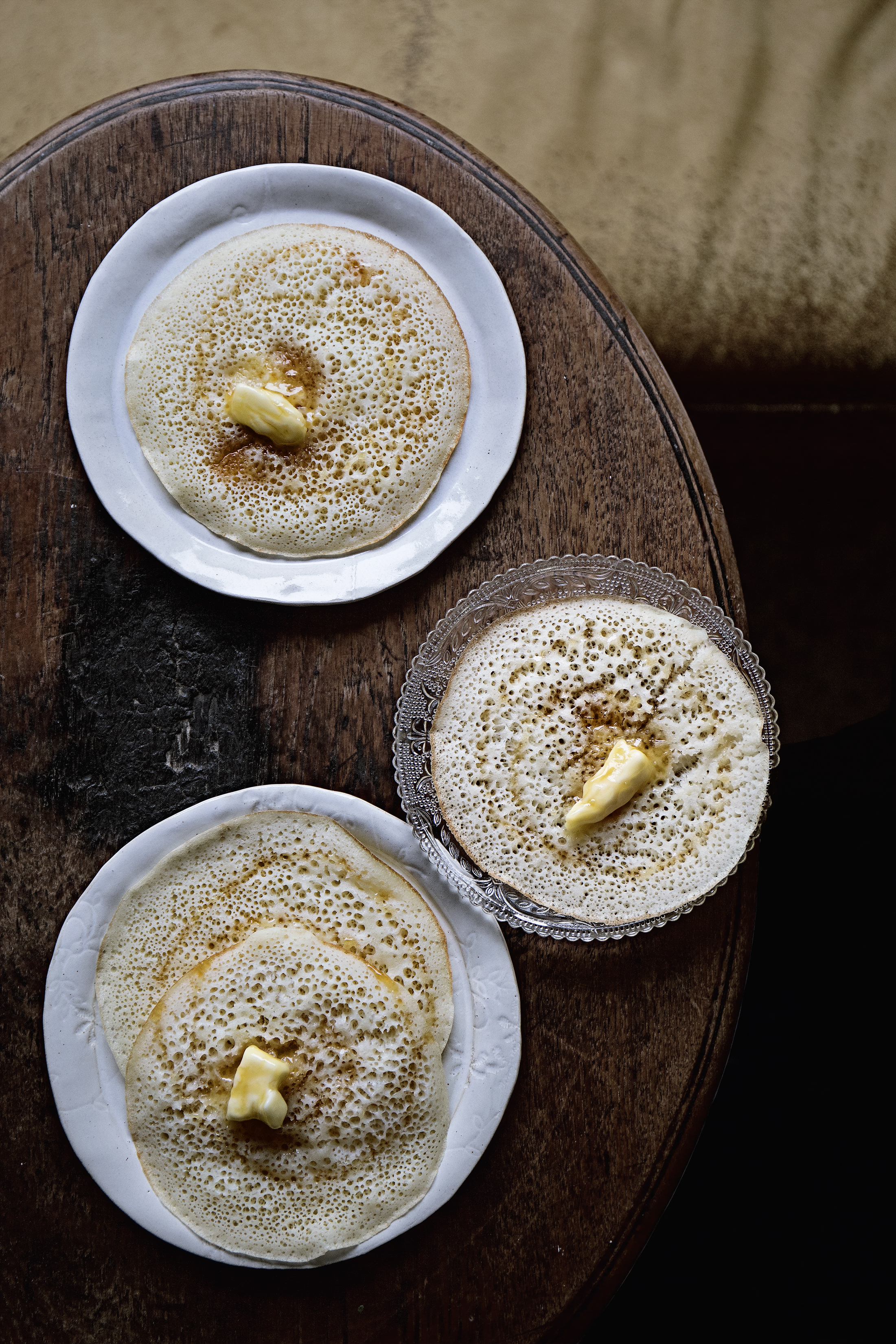 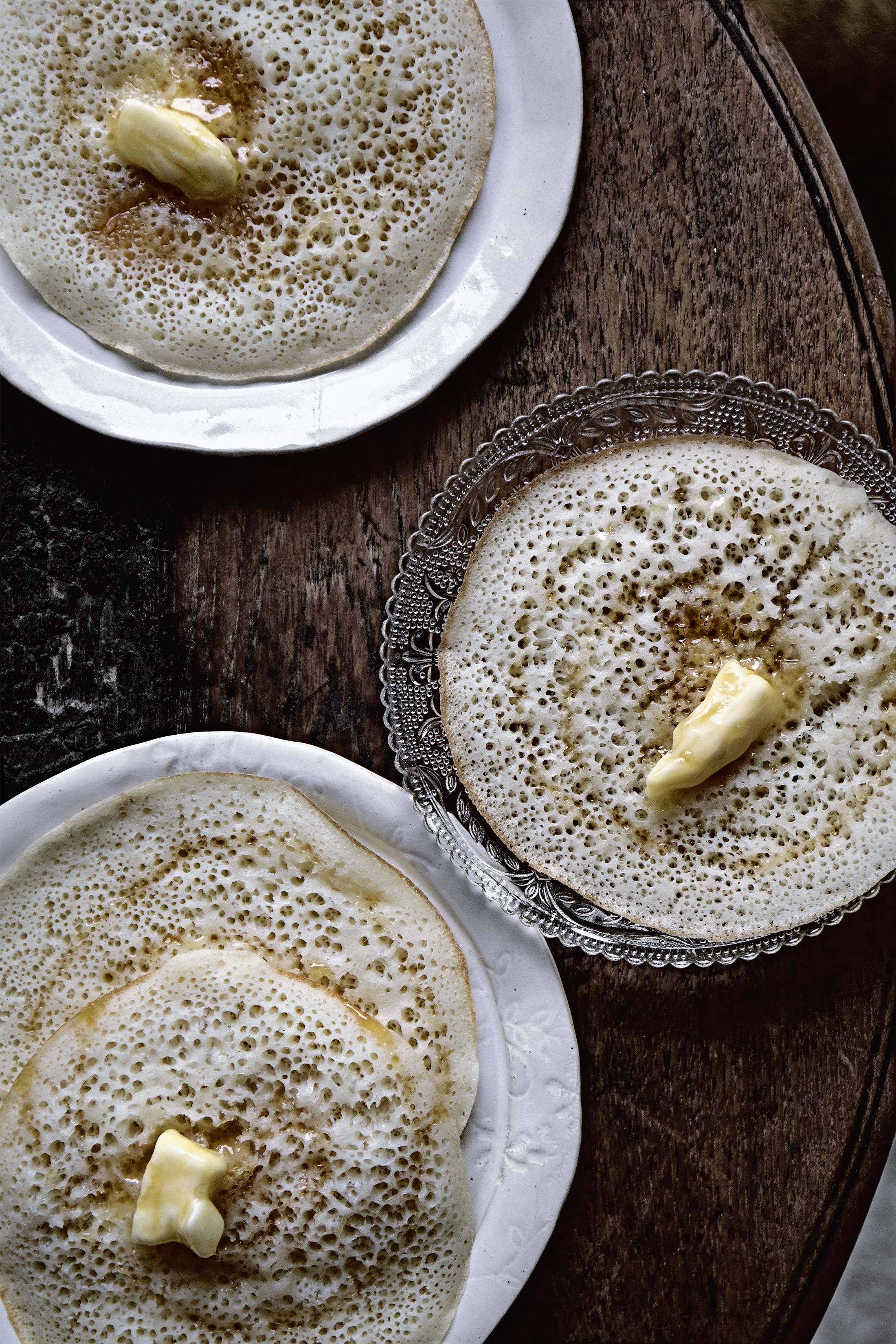 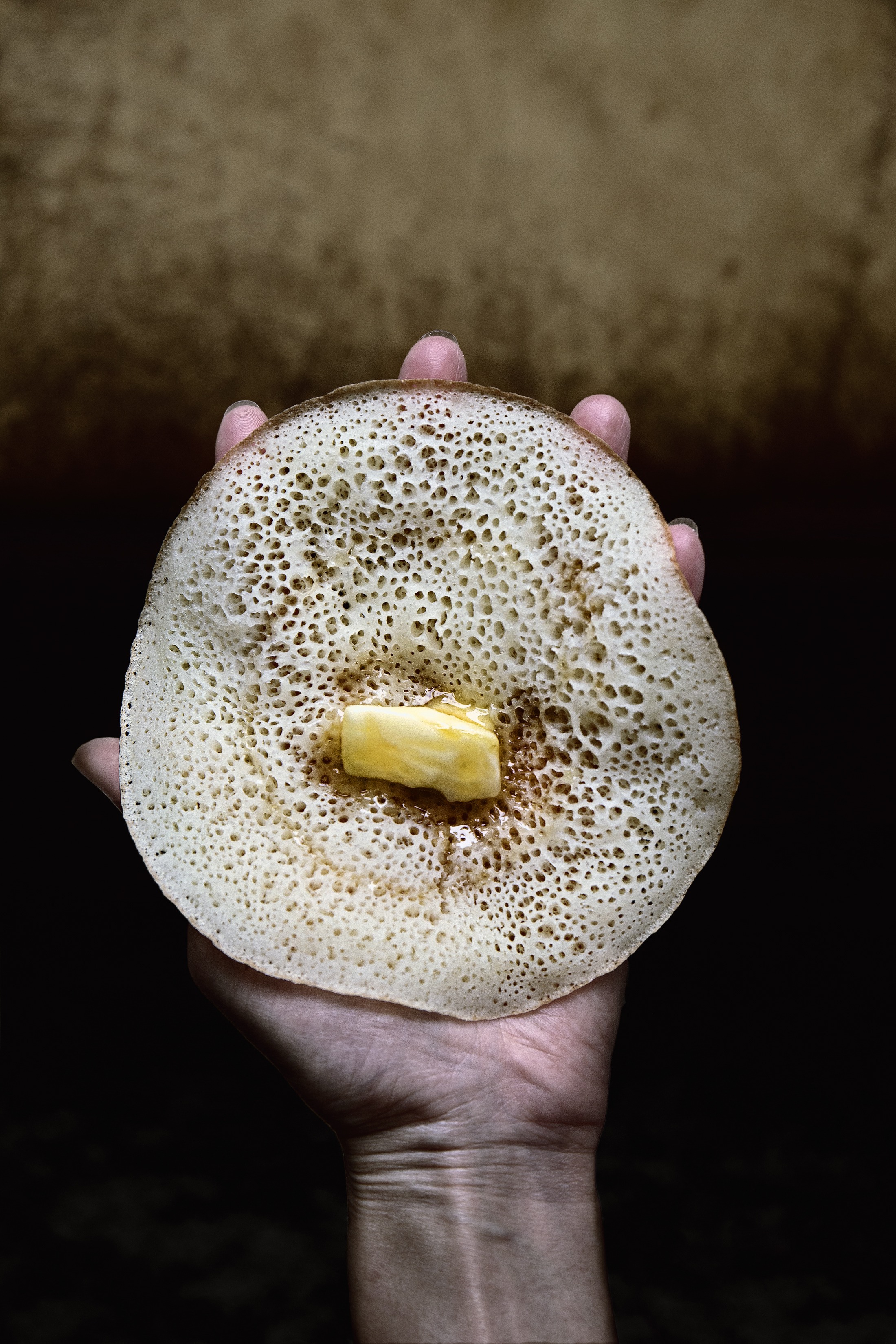 * Some baghrir recipes involve baking powder, but I find it unnecessary, counter-productive even, resulting in large, moon surface-like bubbles. The yeast itself will do the bubbling job perfectly.

* The extra protein in bread flour gives the pancakes more body and chewiness, which I think is paramount in a successful baghrir. But if you only have all-purpose, it will work, too, but just slightly less exciting.

* The bubbles of baghrir should be small, densely populated and delicate. If you find your bubbles too large and scattered, it is usually a sign that the batter has over-proofed. You need to either reduce the rising time or the amount of yeast.