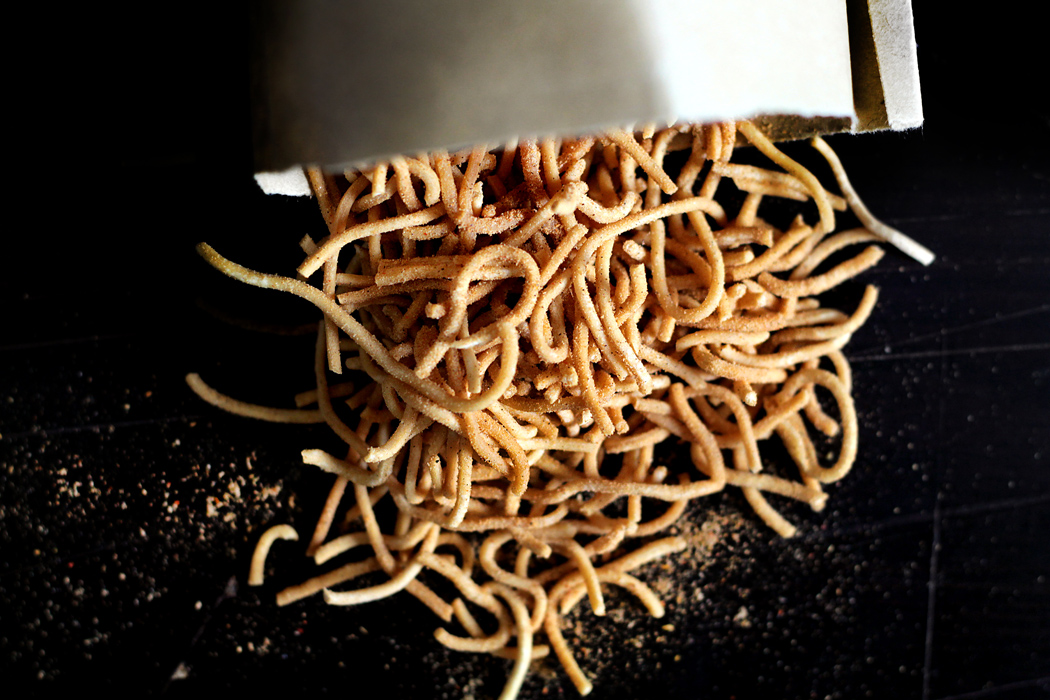 “WE ALL KNOW HIM, A PUNK PRINCE WITH A BASEBALL CAP”

This story of the distortion or/rebirth of a Prince, is either going to sound savagely wrong or/wistfully nostalgic, depending on whether or not you came from an island called Taiwan in all its quiet and subordinate existence just southeast of China.  You’re looking at something called the wang-zi (prince) mian (noodle).  The extent of its popularity outside of Taiwan is a less certain matter but yeah, we all certainly know him, the punk-looking prince with a hideous baseball cap on a bright yellow and red-striped plastic bag, with a brick of fried noodles and seasonings inside.  Cup Noodles in bag-form.

Except for the obvious disconnection between his look and the word “Prince”, there was nothing out of the ordinary.  His journey only grew remarkable at a historic moment when he, among other bugs and such, became the victim of children’s relentless savagery which left him deformed. 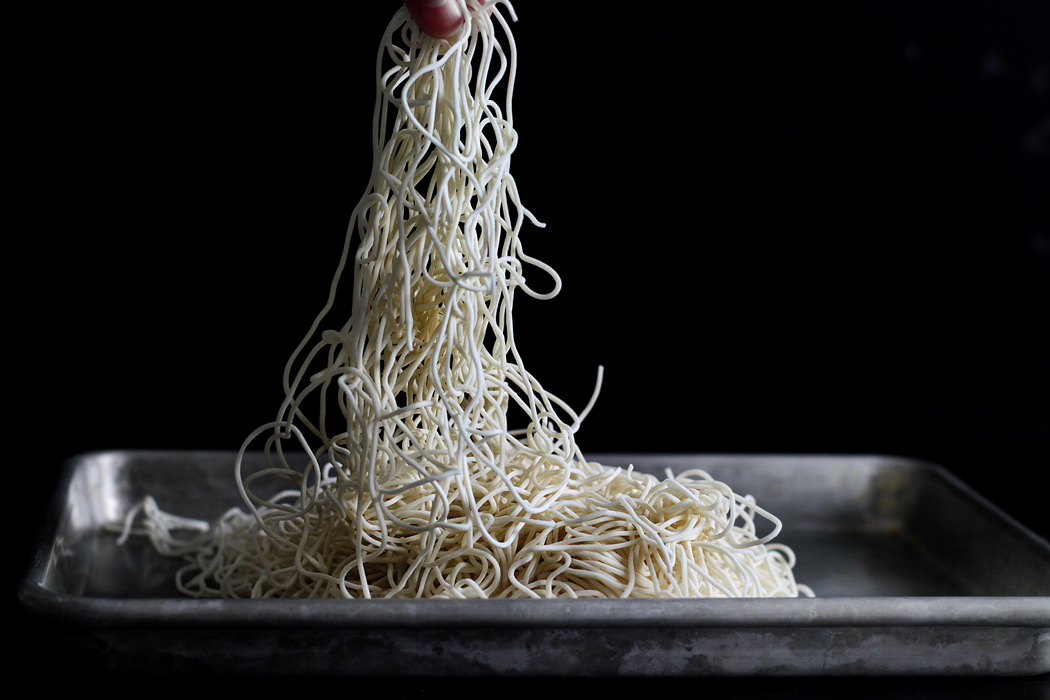 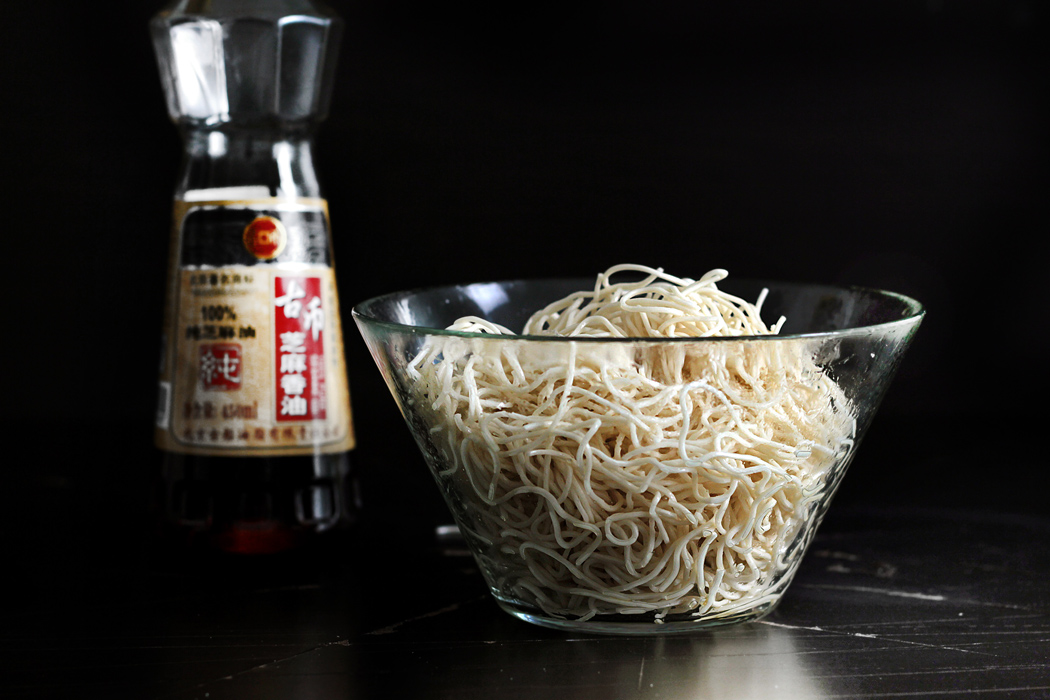 Because the thing is, wang-zi-mian was never meant to be a snack.  It was meant to be cooked in boiling water like any proper instant noodle soups, as practiced in any other civilized culture with attention to rules.  But somewhere back in time, a reckless kid decided to spare the neighborhood’s stray dogs and instead, channeled his/her primitive violence towards innovation.  He/she, probably with bare hands, completely demolished the entire bag of fried noodles along with the seasonings, into a pile of salty and peppery wreckage, then (I suspect) stood right there amidst the crime scene and ate it as it was.  The kid who marked the genesis of such ritual was never documented in history, but his/her legacy lived on.

From then on, wang-zi-mian was never looked at again as instant noodle soup, but strictly, fried noodle chips tumbling in savoury seasonings as well as a part of childhood memory of Taiwanese kids. 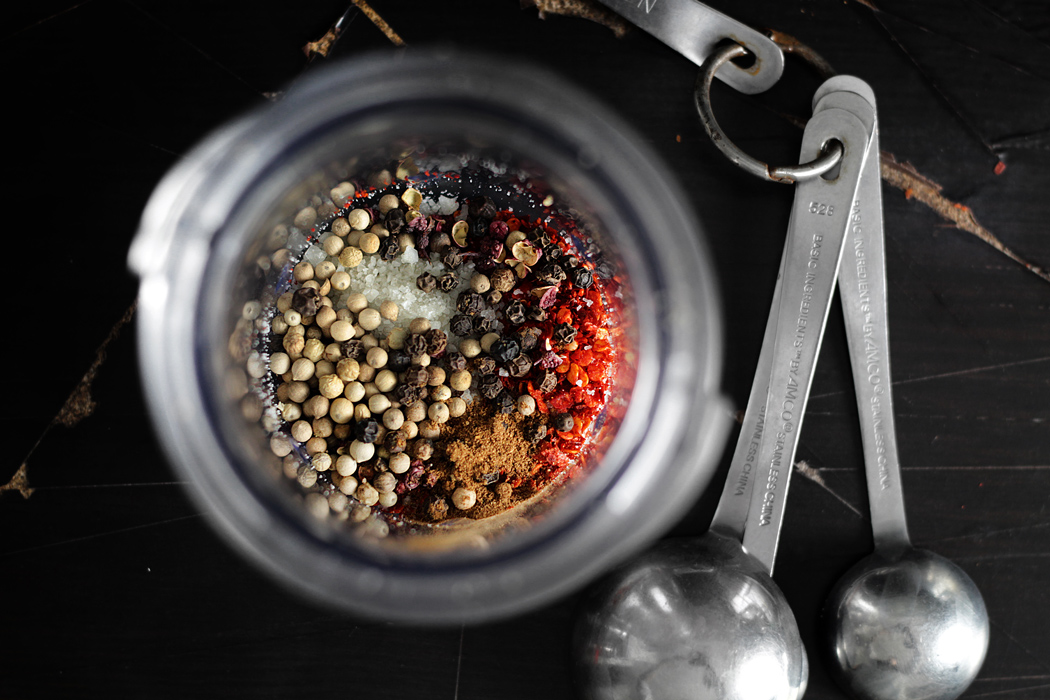 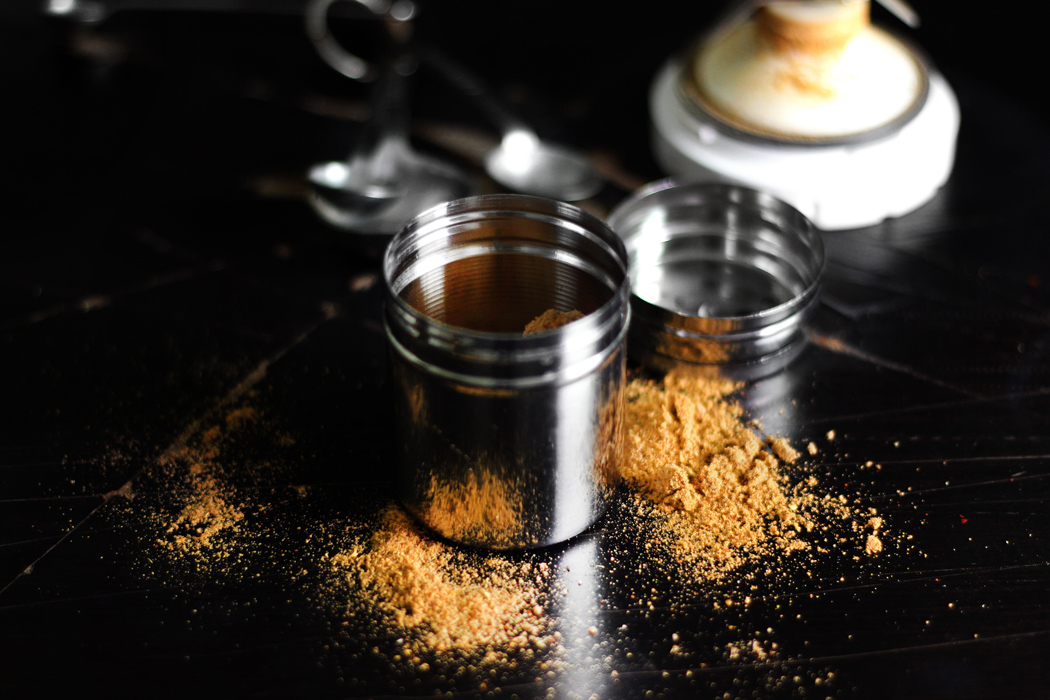 If you are speculating around the potential of such bizarreness, let me just end it by saying, yes, it is quite addictive.  There’s no reason to doubt the promise of fried dough tossed with salty blend of spices and peppers, however, the rationale behind making it at home, is a less certain matter.  I’ll be honest.  I ran into this while I was on the way to somewhere else, and it became possibly one of the easiest and fastest snack I have tried to put together.  I didn’t realize how liberating it was to eat without the little voice inside my head shouting oh shit, who knows what tumor-inducing factory-powder I’m putting in my mouth.  And I think 20 minutes later, you’ll agree with me, too.

First, I pulverized a mixture of sea salt, chili flakes, sichuan/black/white peppercorn with a pinch of cumin and five spice, then I not-so-carefully transferred it to my new spice-shaker for reasons beyond functionality. 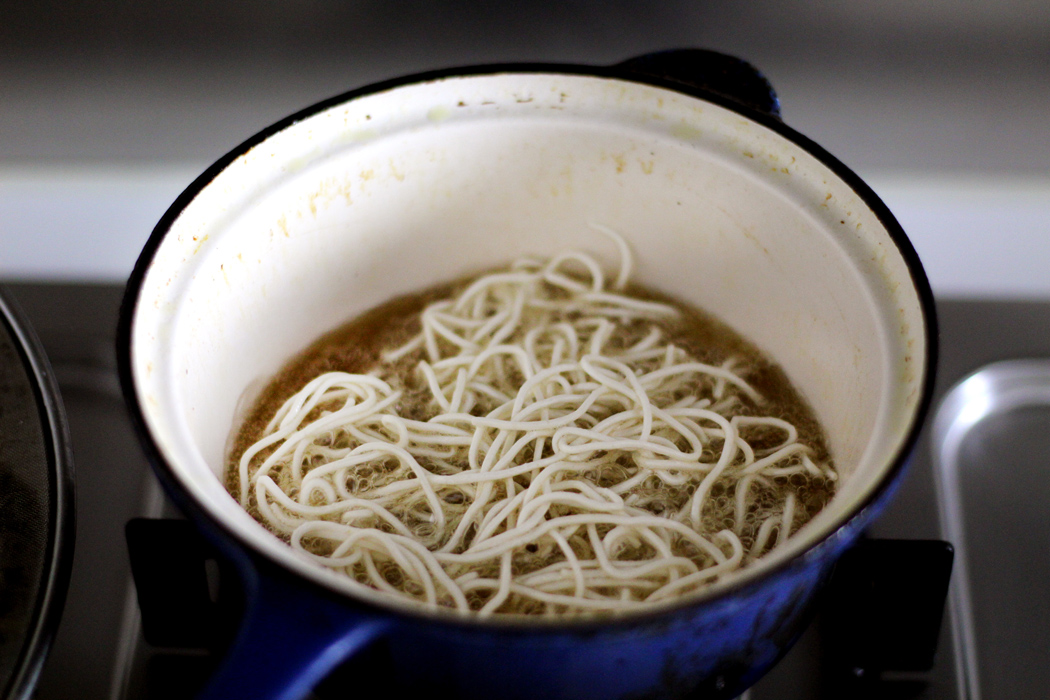 I then fried the ready-made fresh noodles in a shallow pool of oil, faster than I could regret it. 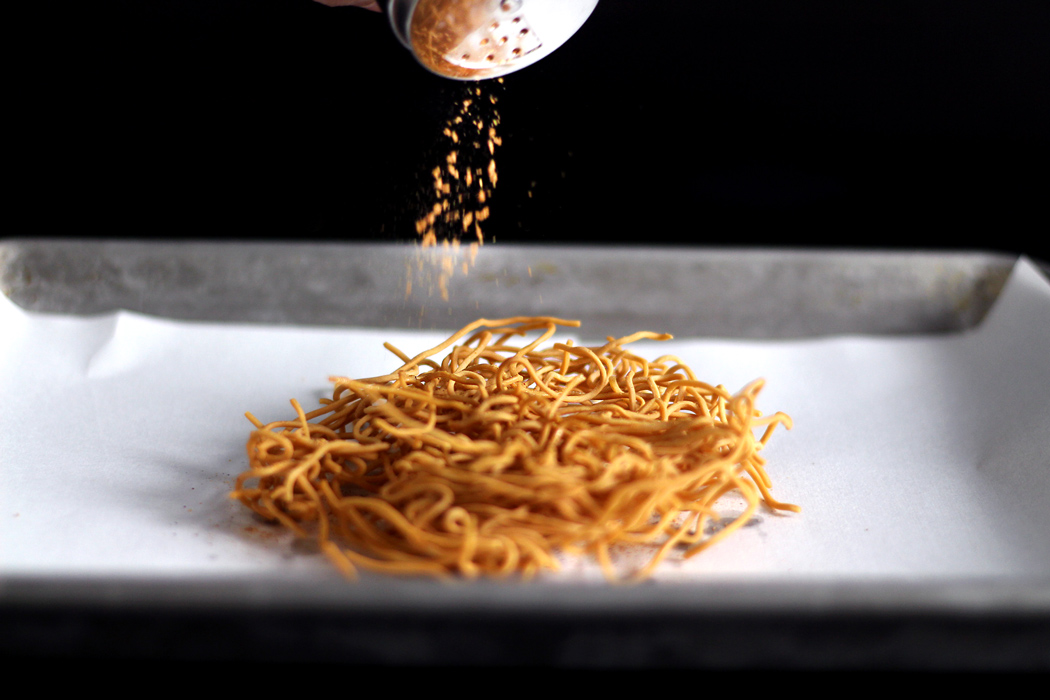 Seasoned it immediately right out of the fryer because that’s what you do to fried foods, eh? 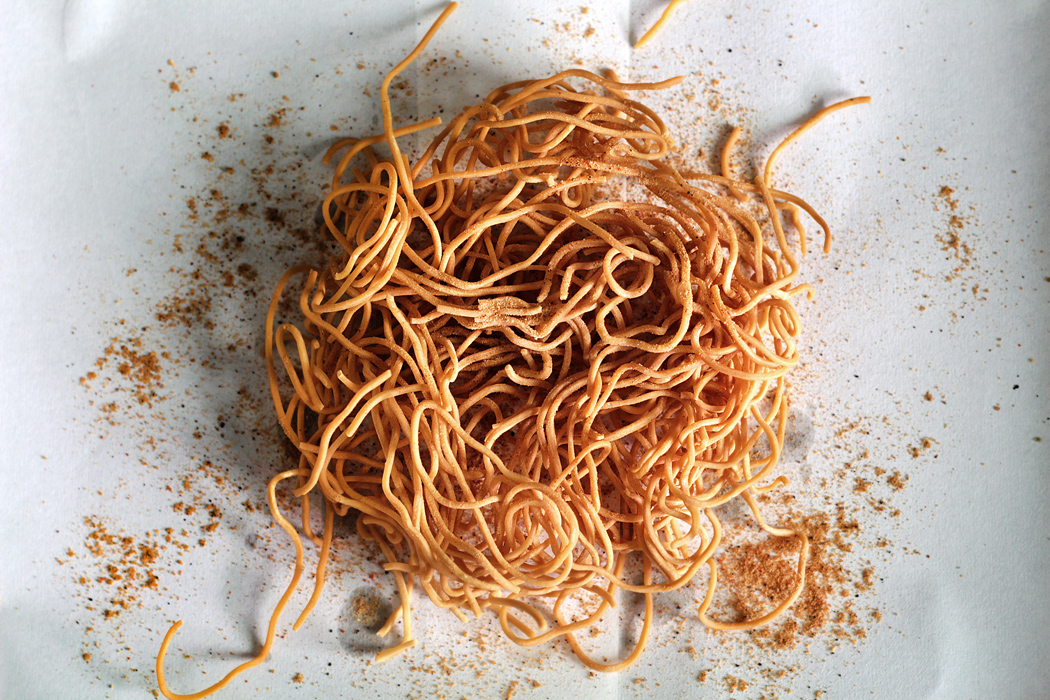 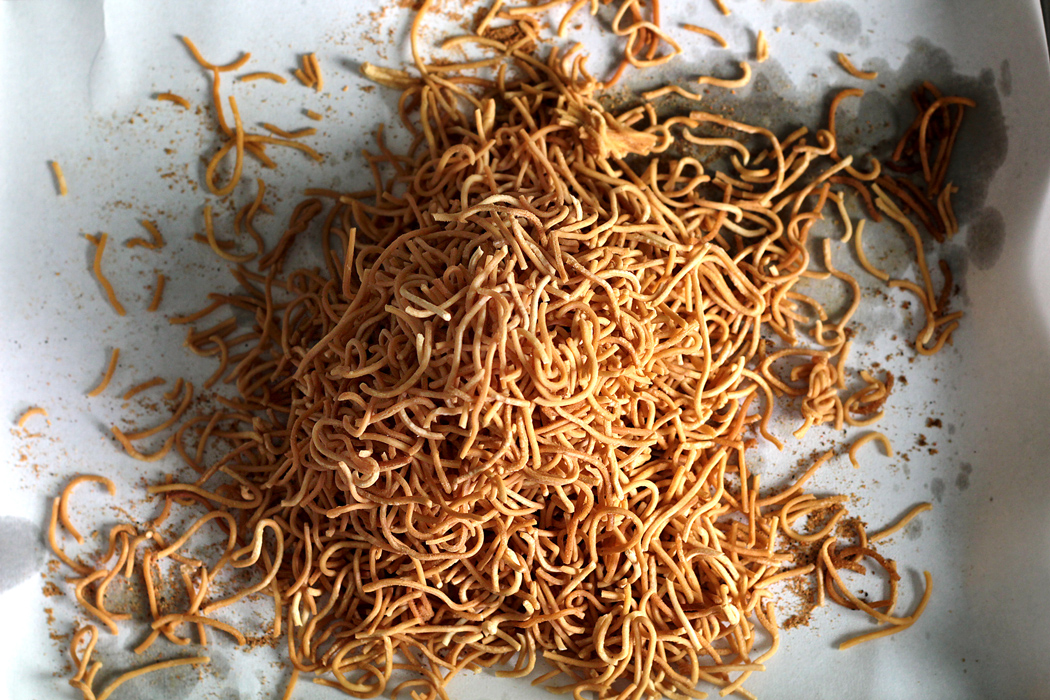 I repeated with the rest of the noodles which really took no time at all, then I let the satisfaction of crushing them into a pile of crispy deliciousness lay the red carpet for what was to come. 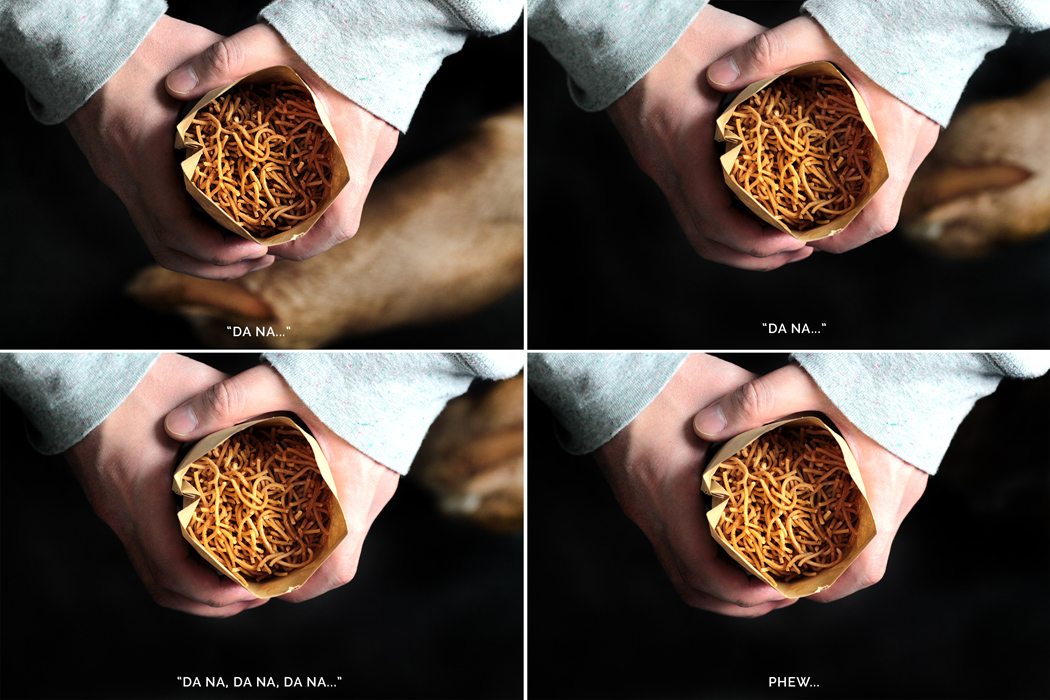 I slid the pile into a brown paper-bag with even more seasonings, and gave it a good shake… watched out for any scavengers that picked up the scent and circled around the feasting ground.  I gathered a good pinch, tilted my head back, and dropped them into my mouth.  Crunch, crunch, crunch… just like that.  Crispy, spicy, savoury and peppery.  Not a bad way to feel like seven again. 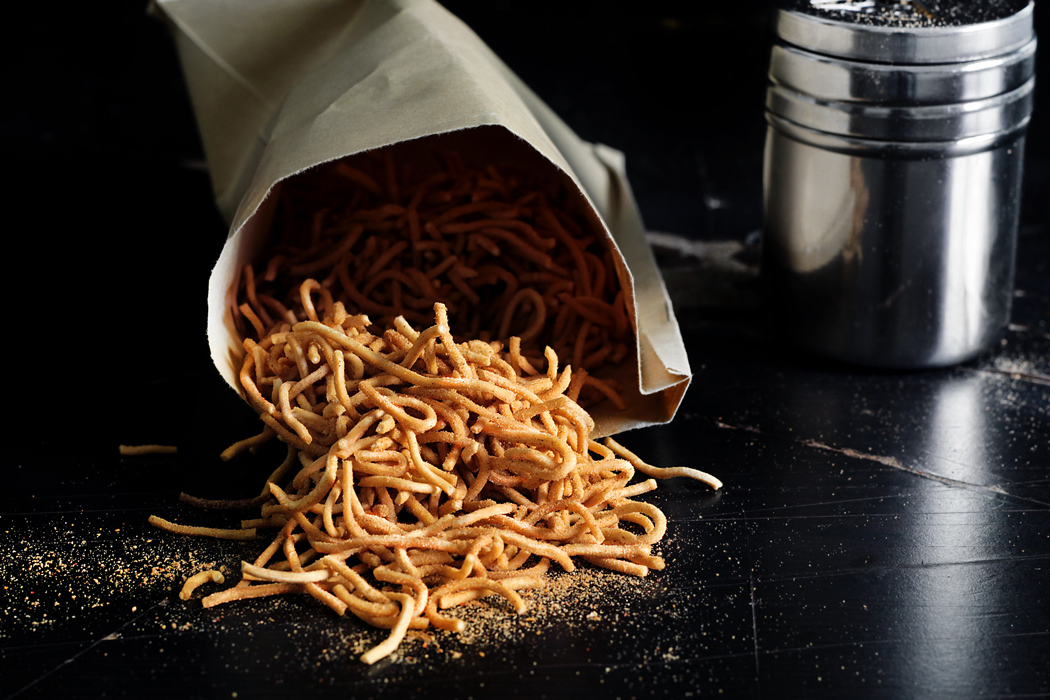 You will NOT need a lot of oil for frying these noodles, just a shallow 1″ deep in any pot will do it.  The noodles have to fresh (not dried), and it’s best if they are thin and round because they’ll fry up more quickly and evenly inside-out.  If you don’t have whole black/white peppercorn, you can replace it with the equivalent amount of ground peppercorn, but freshly ground is always best.

To make the spice blend:  Combine all the ingredients in a spice-grinder and blend until powdered (the finer it is, the better it’ll stick to the noodle).  Transfer to a spice-shaker or bowl.

To make the noodle chips:  Evenly mix the fresh noodles with toasted sesame oil and set aside for 15 min.  Add enough vegetable oil in a pot until it reaches about 1″ deep, and heat up over medium-high heat.  Test the temperature of the oil by sticking a wooden chopstick in the center.  If it starts bubbling up around the chopstick almost immediately, the oil is ready.  Turn the heat down to medium to medium-low, then start frying a few strands of noodle/a small handful at a time (the noodles will expand slightly so don’t crowd the pot).  Turn the noodles over if necessary, until fried lightly golden and crispy (be careful not to over-brown it), just a couple of min.  Transfer to a paper towel-lined baking sheet and immediately, season with the spice blend (gotta season it once right out of the fryer).  Continue frying and seasoning the rest of the noodles.

Break the noodles chip into short segments by pressing them gently with your hands.  Transfer to a paper bag, add more spice blend into the bag and shake to distribute evenly.  Crunch away. 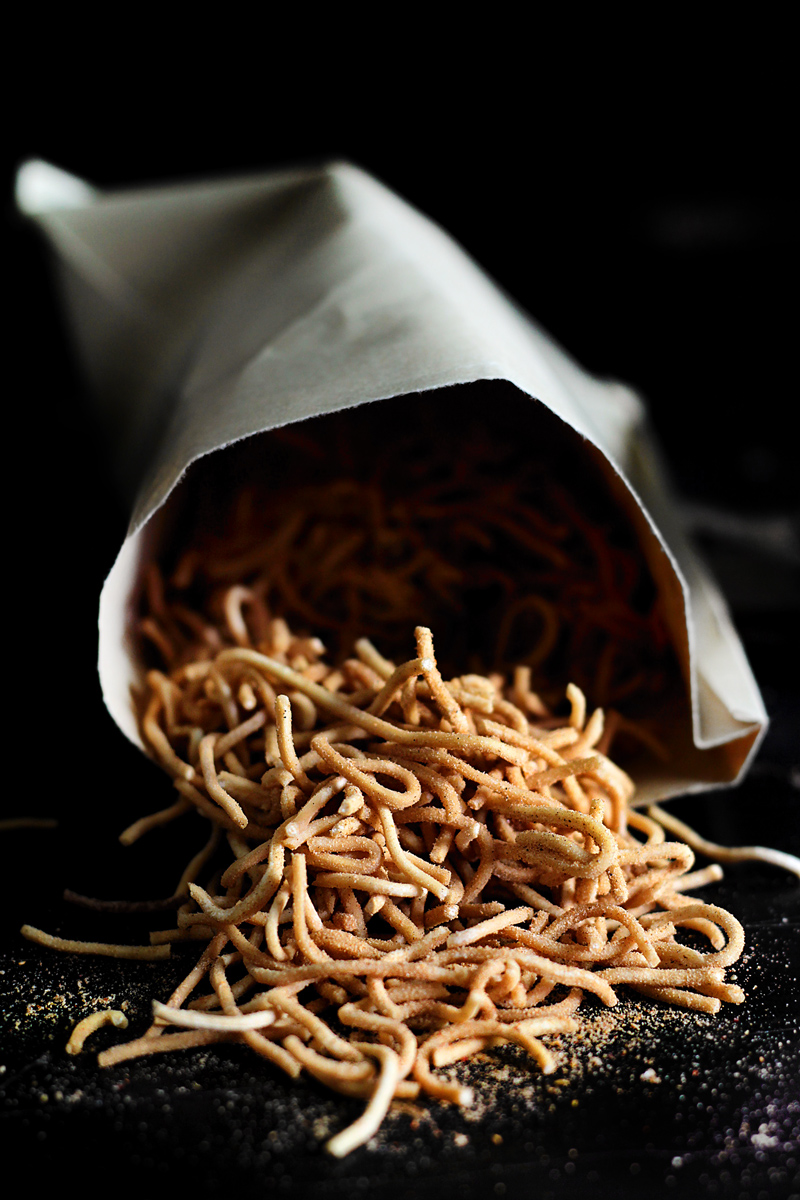