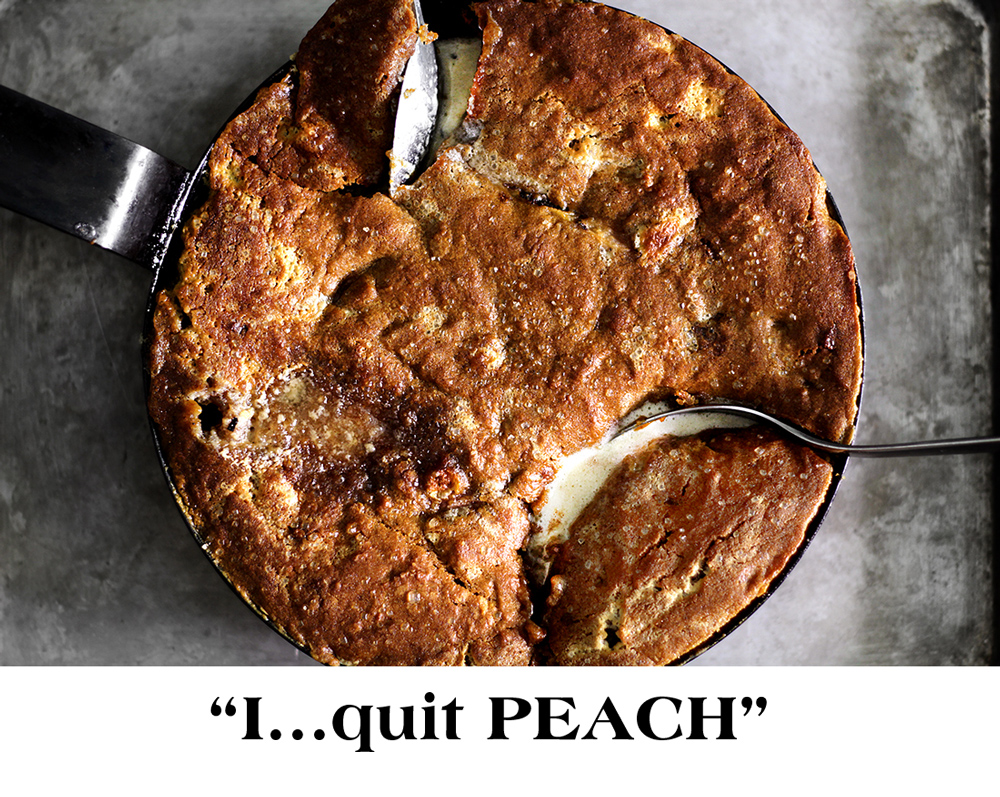 Had I anticipated enough courage to pick up the topic of peach and mascarpone again this summer, I probably wouldn’t have cashed that sob-story so early. After that horrendous disaster of a pie, if that pile of slumpy menace could still be called that…, I was determined to quit peach forever, total rehab. After all, they quit me first. You see, that’s the other side of the story. Years ago, peaches decided to join the alliance of fruits that were waging an allergy campaign against me by inducing itchy mouth every time I tried to reach out a friendly lick. As I was addicted to rejection, every summer since was a struggling anniversary of our separation. Even after more than a decade… that day when I picked them out of the mascarpone-puddle-of-death and ate them, the peaches still made damn well sure that I was reminded. I saved them from the fate of the eternal dumpster and they repaid me with crawly esophagus… lil fuckers. 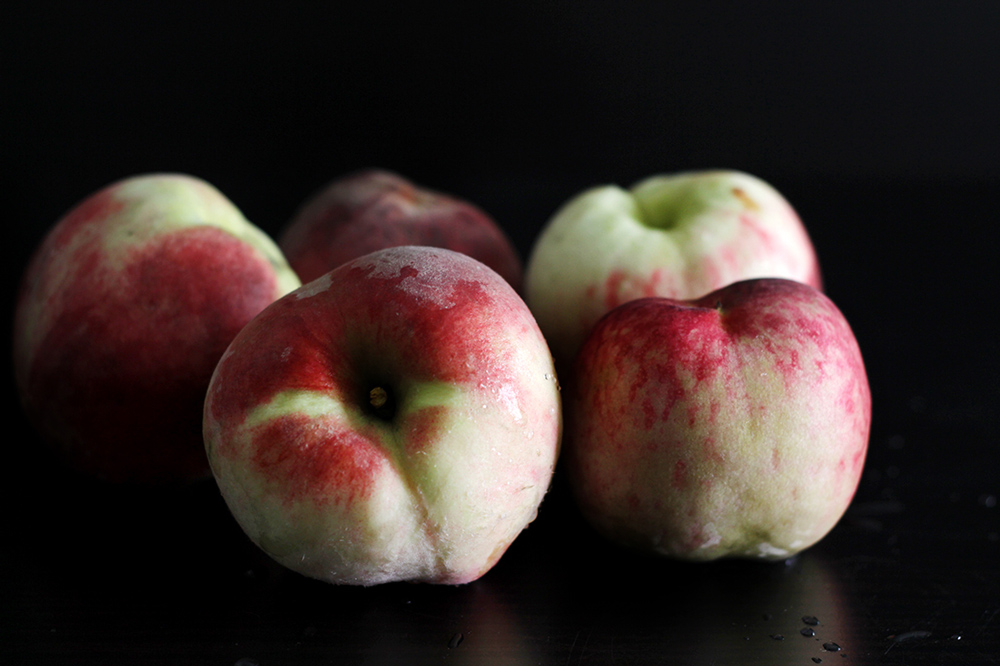 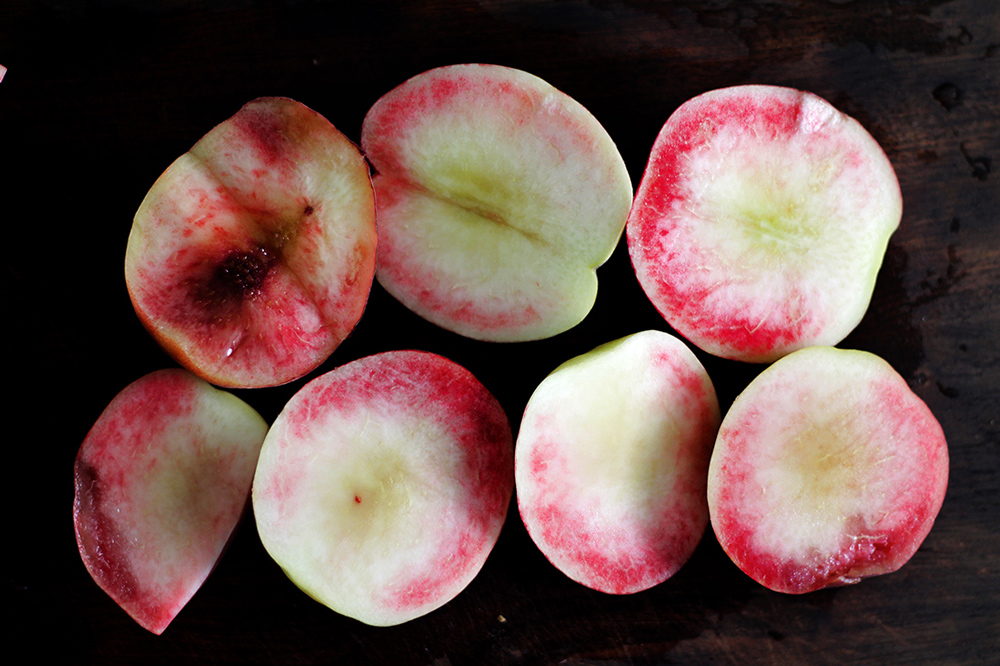 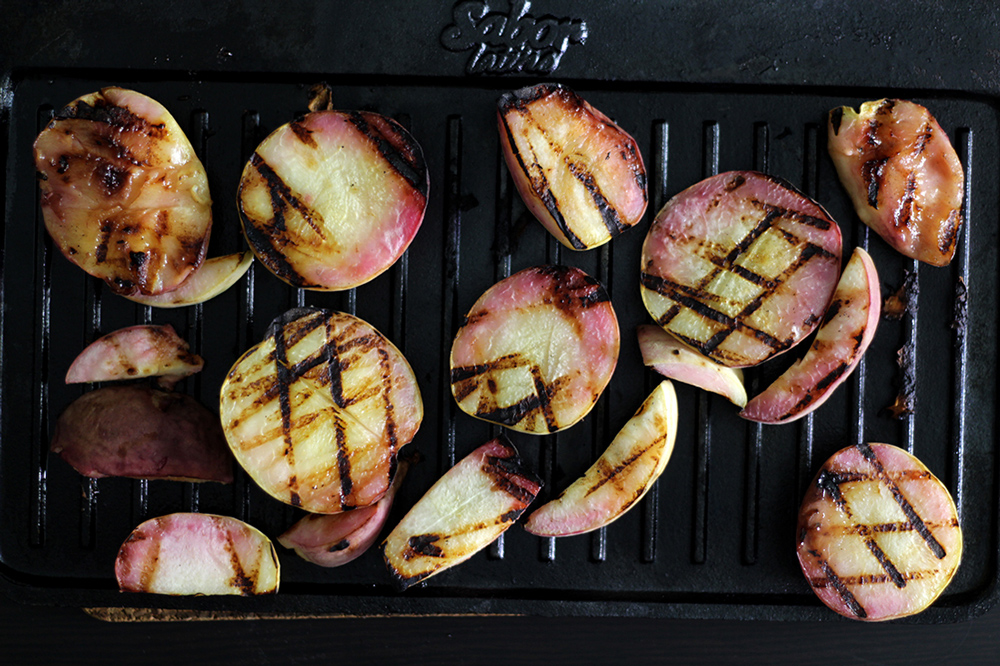 But I guess no surprise to you, I’m a lil junkie who can’t pull through rehab. And I know for a fact that I’m not the only person who is like this. Millions of people all around the world suffer with drug and alcohol addiction, as well as other things, on a daily basis. My friend will be included in this statistic. It was a long time before she got clean, and if it wasn’t for somewhere like this alcohol treatment in Portland clinic who helped with her sobriety, I don’t know where she’d be today. And now, it looks like I’m going down the same path. The other day I innocently passed through a roadside market flashing buckets of in-season… temptress peaches at my face. Relapse loomed at this unseemly street-corner named desire. A whirlwind of blurry visions later I was pulling away… pulling victoriously away from the stall with my bike and my previously purchased groceries in my overloaded basket… plus 4 peaches dangling right on top. So ashamed… despicable… you think I didn’t know that? But before I had a second to resume sobriety, I heard the fruit-lady yelled “Falling falling!…” and almost at that simultaneous instance, I turned and witnessed my relapses… tumbling out of the basket in slow motion then smashed their pastel baby-bottoms onto the cold-hearted asphalt… rolling down the slope in a tragic tangle with the pale-faced plastic bag. Nooo~~~! 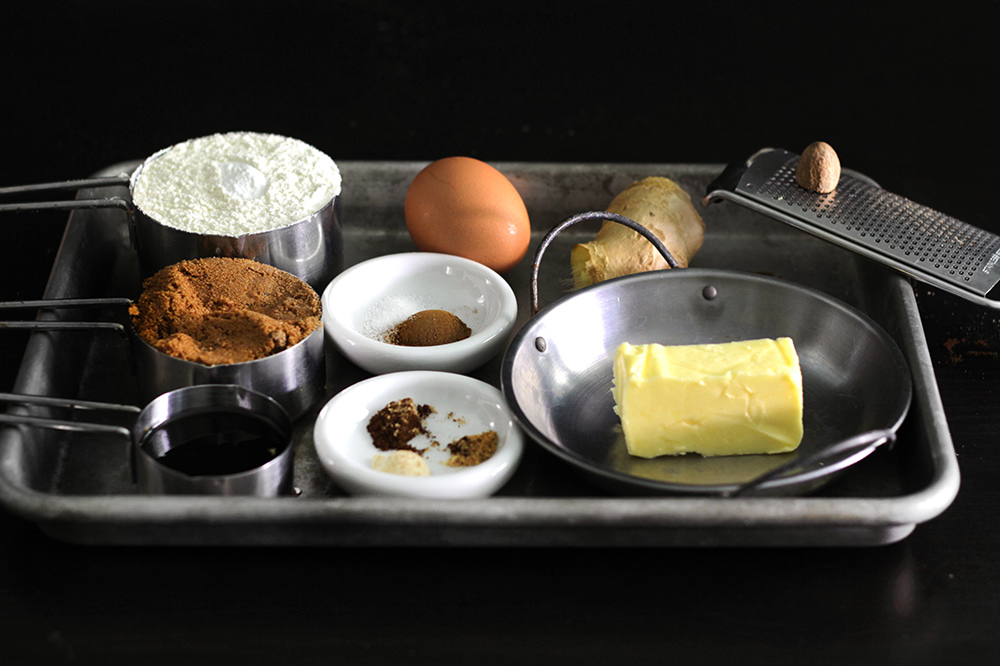 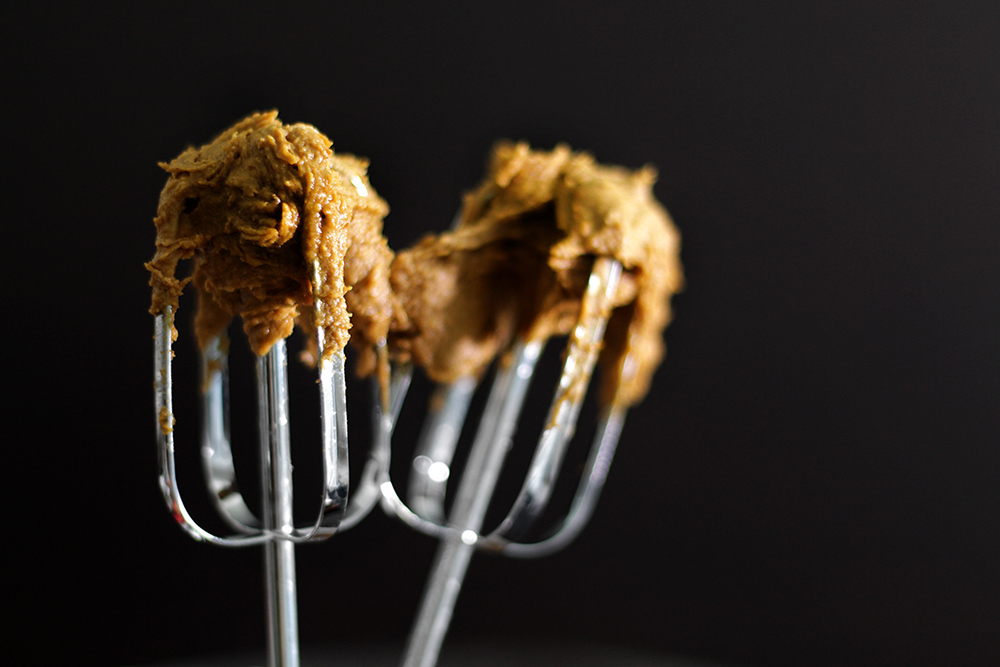 … stunned… rejected… then RAGE~! What! Have I!! EVER!!! Done to you, you unworthy little PUNKS?!! (No no, not YOU! I am talking to the peaches). Haven’t even heard of my majestic plans for you – to grill the hell out of you guys and bake you submerged in a creamy concoction of mascarpone and rum (because cooked-you can’t make me itchy HA!), under a hood of dark molasses/ginger cookie tingling with spices, yah that’s right – and you ran? What happened to a little FAITH, uh? And you! Yes you! (No no, not YOU! I am talking to the fruit-lady). What happened to a little honor in service, uh? Didn’t even flick your lips to ask if I wanted them replaced since you were the one who positioned them so unsoundly on top of other thing. Just so you know, uh, I would’ve said NO anyways, yah~ (reasons are not for those sore with bitterness…). 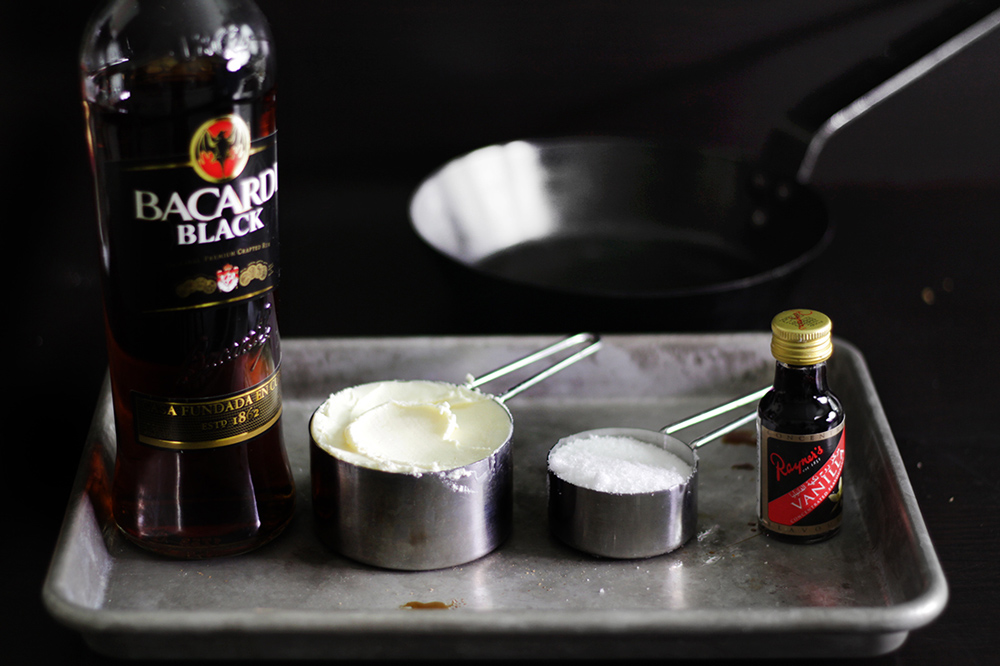 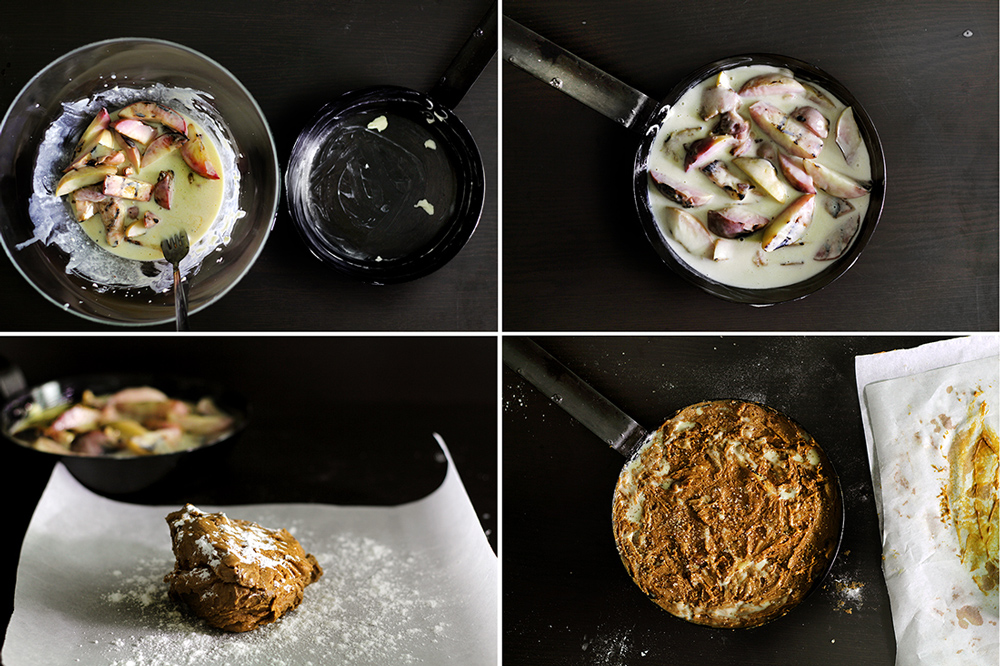 But I came home realized all that drama was all for nothing (a swift downturn from climax I know…). The peaches were so unripe, their “pastel baby-bottoms” were in fact as firm as Channing Tatum’s tight buttocks, with just the slightest little dent to make them look rustic and sexy. Well… OK? I guess. I pushed through with the “plan” anyways, charred them with nice grill-marks, submerged in boozy mascarpone cream, baked under spicy ginger cookie-lid… the whole nine yards. And let me just say… peach pie-redemption!! Reconciliation. We simpatico-ed. Whatever you want to call it. It was sweet, warmly spicy, good-old deliciousness. If I must fuss. Could it have looked prettier if I had chilled the cookie dough longer for it to firm up and therefore easier to shape? Yes. But who cares? Could the peaches have been more ripen and therefore softer and perhaps fruitier? Well, your peaches are going to behave much less defiant I know. But all in all, insignificant detail in the glory of a yummy reunion, finally, of me and mid-summer peaches. I’m moving onto you next… (No no, not YOU! I’m talking to figs…). 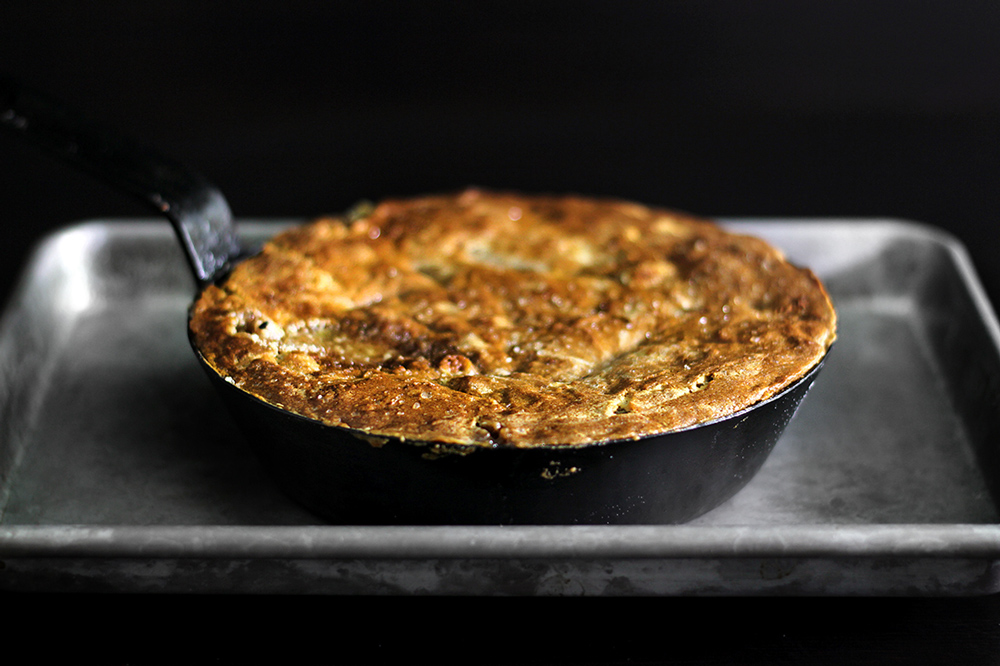 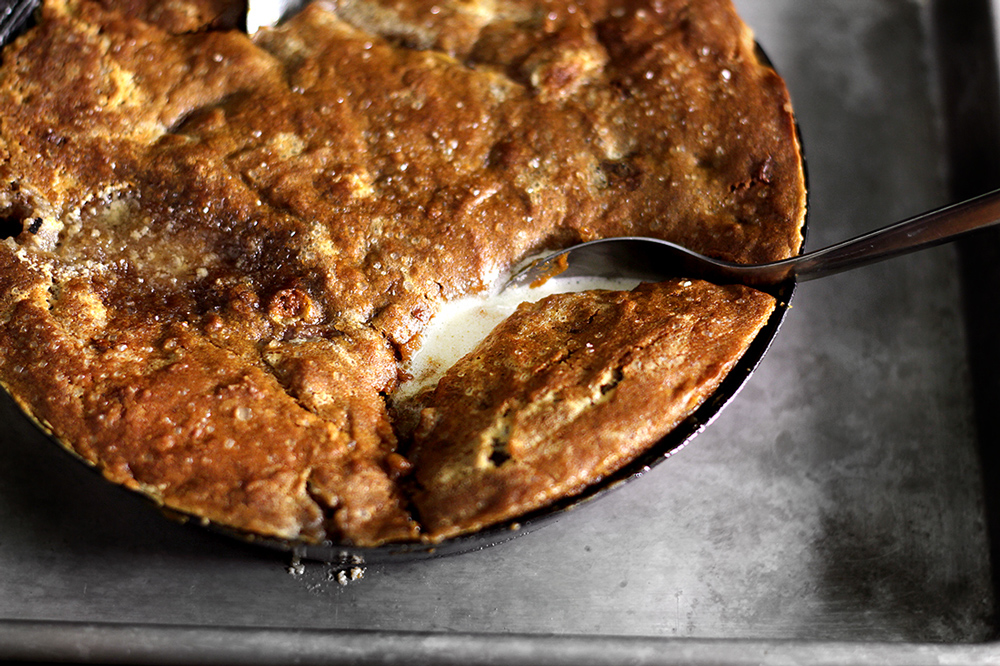 Just so you know that the cookie-lid is supposed to be flatten into a disk and laid on top of the filling looking… well as a lid like this. But since I didn’t let it harden/chill enough in the fridge, it was too sticky and soft to work with and hence… not the most perfect coverage. Didn’t hurt the flavour ONE BIT though, but… that’s if you care.

Make the cookie lid: Whisk together flour, baking powder, cinnamon, cloves, ginger, grated nutmeg and salt together in a bowl. Set aside. In a stand-mixer or with hand-held mixer, beat butter and brown sugar until light and fluffy, approx 3 min. Then add molasses, 1/2 beaten egg and grated ginger. Beat again until smooth. Add the flour mixture and mix until evenly combined. Chill the cookie dough in the fridge for at least 1 hour to firm up.

Make the filling: Slice the flesh off the peaches and discard the pits. Heat up a flat grill-pan over high heat, and grill the peaches flesh-side down until they get nice grill-marks. Set aside. Whisk mascarpone, granulated sugar, dark rum and vanilla extract together until smoothly combined. Slice the peaches and add to the mascarpone mixture. Set aside.

Add the peach/mascarpone filling to a deep pie-dish. Lay a large piece of parchment paper on the counter and dust throughly with a little flour. Take the cookie dough out of the fridge and place in the middle of the parchment paper. Dust enough (but not too much) flour on top just so it isn’t too sticky, and pat the dough down into a disk, exactly the size of the pie-dish, with your hand. Invert the parchment paper onto the pie-dish, and carefully peal the paper away, leaving the cookie dough laying flat on top of the peach-filling. Lightly press the edges against the rim of the pie-dish with your fingers to seal it. Sprinkle some raw/turbinado sugar on top.

Bake in the oven for 20 ~ 25 min, until the cookie lid is nicely and evenly browned on top. The filling may have over-spilled a little, no worries. Dig in with spoons, communal style. 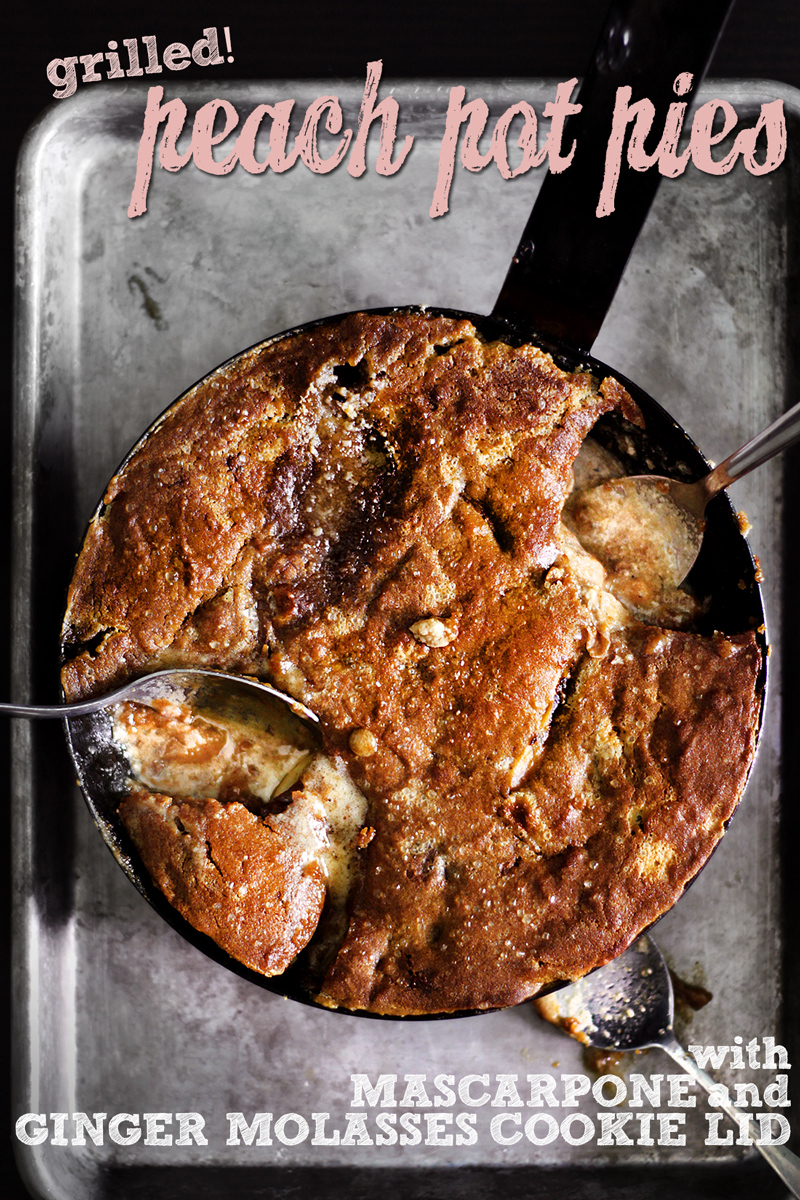 THE WORLDLY PULLMAN-TORTILLA TACOS
NOTHING EDIBLE BUT...
JUSTICE IS SOFT-SERVED