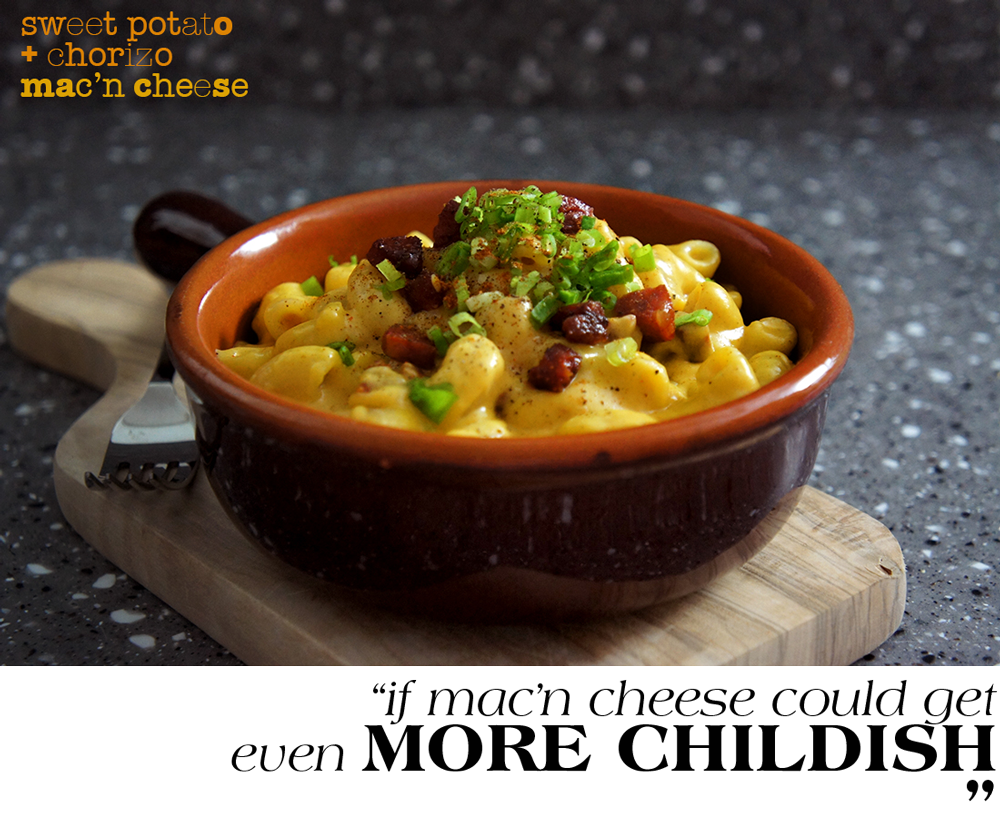 I was actually going to talk about something else with you.  Yeah.  It was a dough.  But I killed it.  So instead, let’s discuss mac’n cheese.  Does anybody object?  Thought so…  What is there to be added about mac’n cheese?  I mean every specimen of cheese or even just cheese-like substances that walk this earth have probably been tested as part of this classic creation.  Single-cheese or in groups.  Fancied-up or down-home.  Baked or loose and runny…!  It’s safe to say this market is too saturated to be enter. 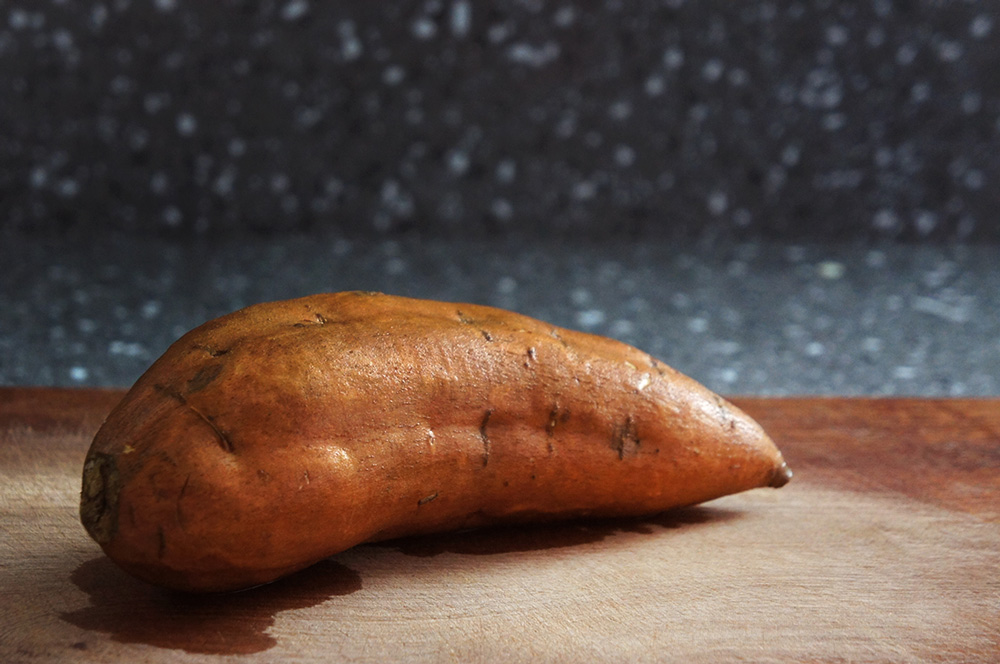 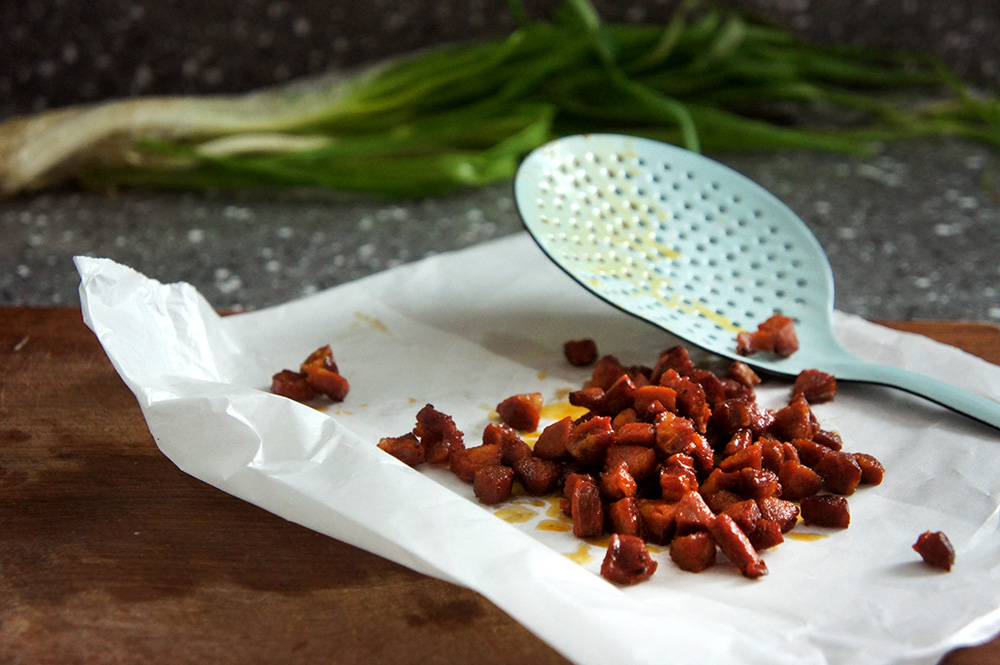 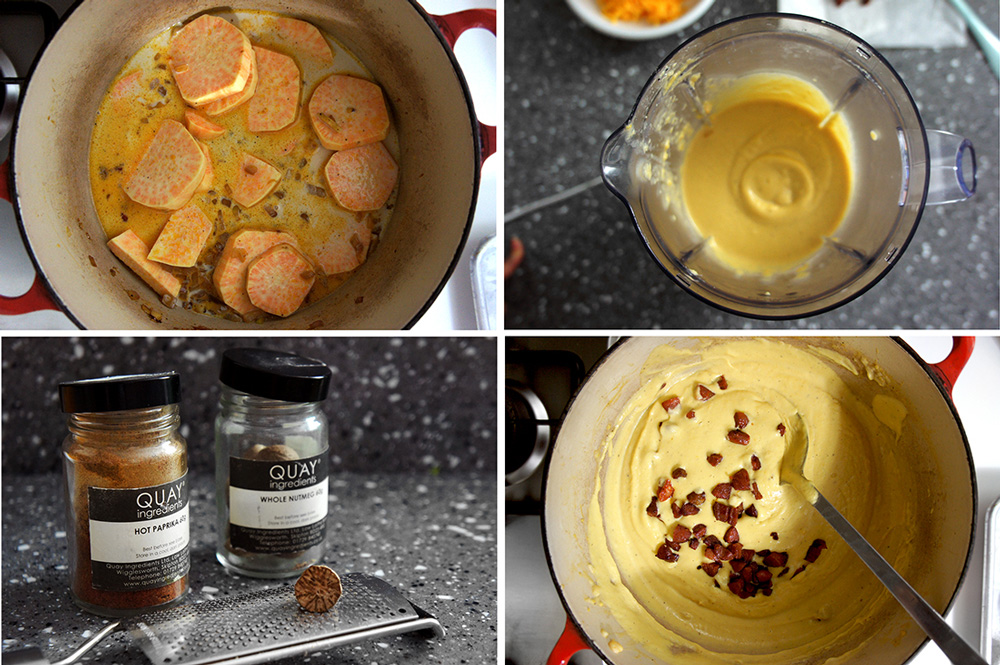 But I must say this shamelessly that I’m a purist when it comes to mac’n cheese.  No matter how fansy it gets in restaurants with however-many different kinds of cheeses, or truffles, or whatnots, I still long for the simplest, unnaturally orange kind that we all secretly enjoy (“Objection!!”)(Lah-lah-lah-lah I can’t hear you~~).  In my mind, the race to the best mac’n cheese had already peaked before it even began (Lah-lah-lah~~).  So I guess the disclaimer is that I wasn’t trying to reinvent mac’n cheese.  I wouldn’t go there.  What this is really happened on a whim.  If my post-vacation blue hadn’t turn in to cooking-fatigue, it would have been a baked sweet potato loaded with chorizo and melted cheese kinda thing.  But I got lazy somewhere between murdering a dough and fiddling with my other more dazzling Mac, it got reduced down to… well a one-pot thing. 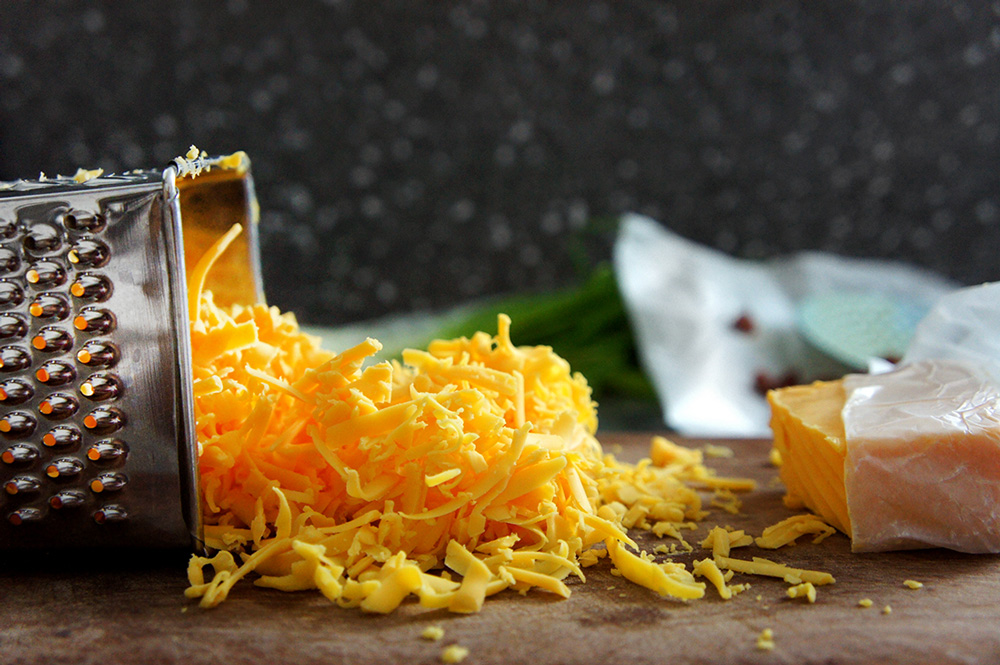 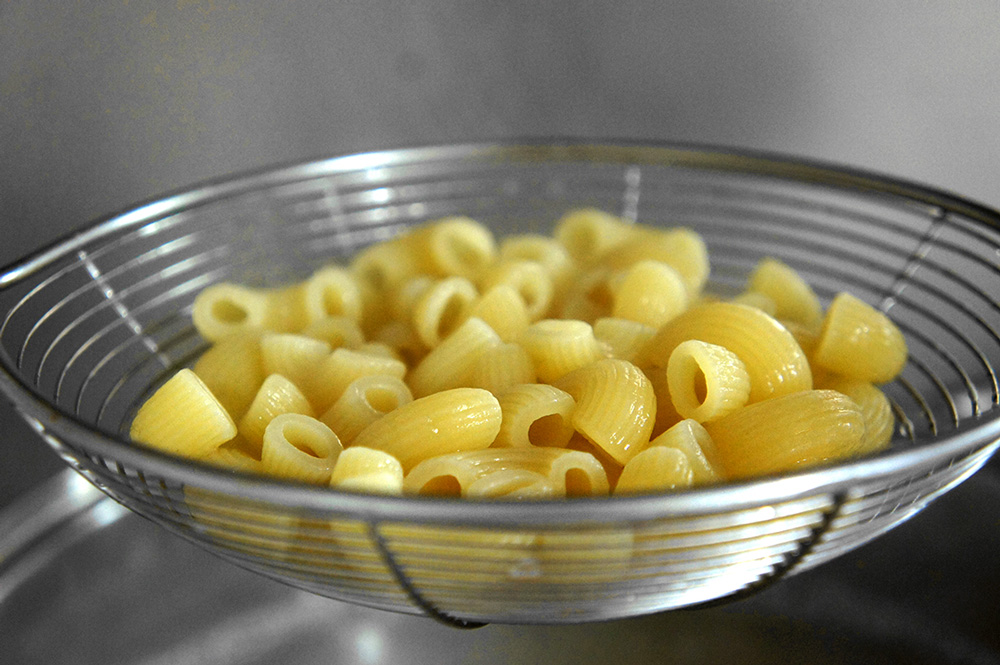 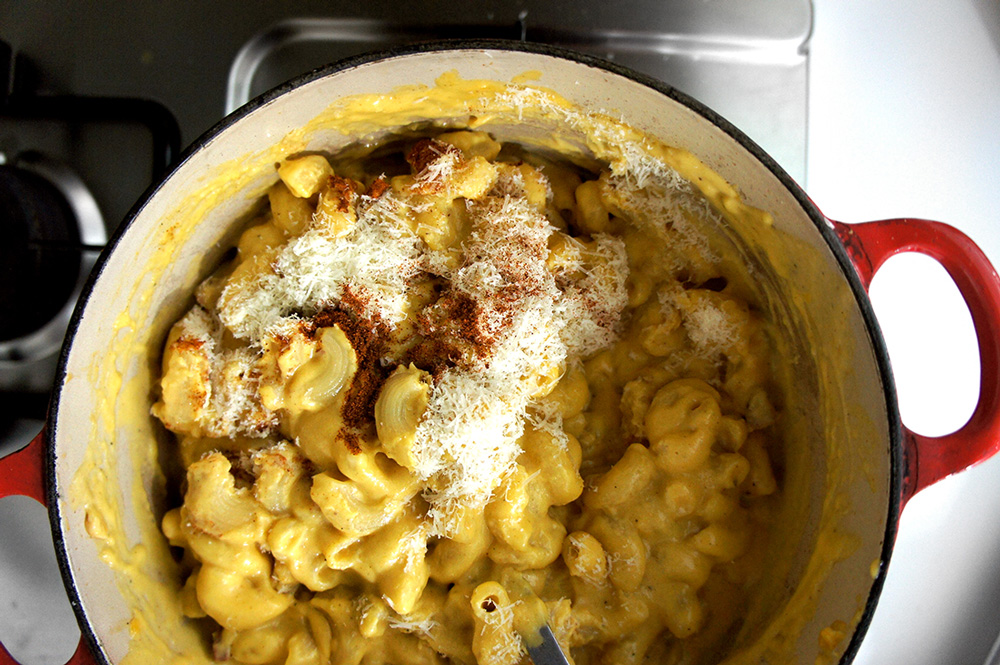 Essentially, instead of a traditional bechamel-base thicken by flour, this is a milk-base thicken by sweet potato puree which gives the sauce a mild sweetness, AS IF mac’n cheese could get even more childish you know.  But the smokiness of chorizo and spiciness from cayenne brings it back onto the big kids table again.  And although I stand by what I said about the best kind of mac’n cheese is the dumbest (“No it’s not!”)(Ignoooored…), original kind (“NO it isn’t!”)(Ignooored again…), this is a pleasantly delicious alternative especially if you are trying to sneak in some vegetables into your kids meal.  No I don’t mean for your kids… I meant YOUR kids-meal.  Don’t we all want those from time to time? 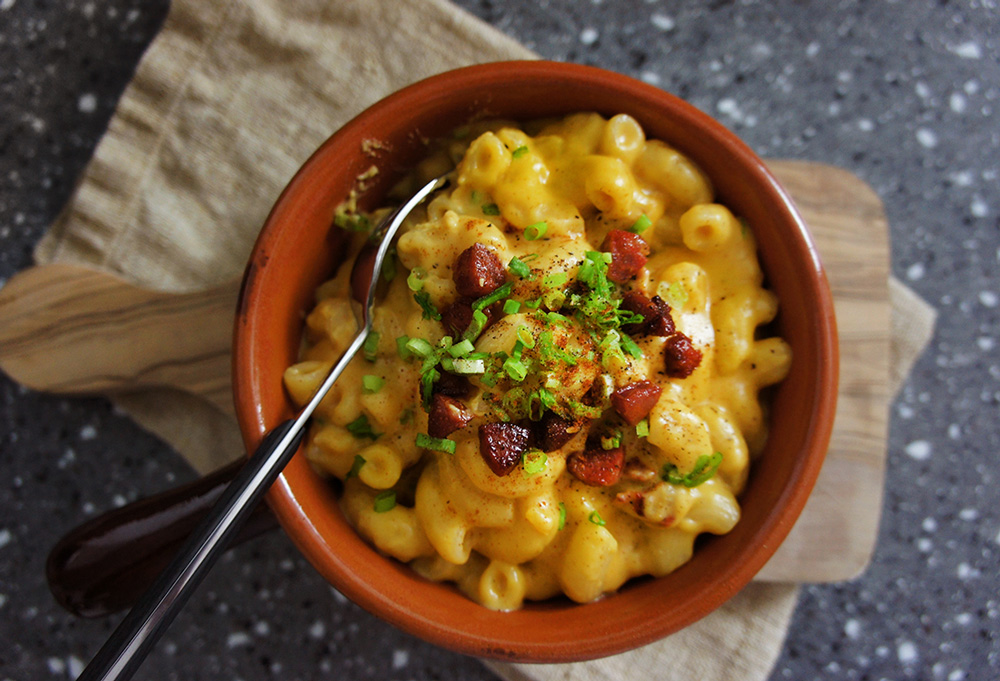 Peel and cut the sweet potato into chunks.  Heat up a large pot over medium heat and start browning the chorizo.  Once the chorizo is browned, remove it with a slotted spoon and reserve it for later, but leave any rendered fat in the pot.  Add 2 tbsp of butter and saute the onion and garlic with a small pinch of salt.  Once the onions are soft and translucent, add the sweet potato and milk.

Bring it to a simmer and cook until the sweet potato is soft and cooked through.  If you don’t mind chunky texture, you could mash the sweet potato in the pot with a masher/whisk.  But for a smoother texture, puree the mixture in a blender.  It should resemble a thick bechamel consistency (if it appears to be very thick and dense, add more milk to adjust).  Pour it back to the pot and set aside.

Bring another large pot of water with a big pinch of salt to boil.  Cook the macaroni according to the instruction on the package.  When you are draining the macaroni, make note that a lot of water could be trapped in its tube-shape form, so shake really well to make sure all excess water is drained.  Add the macaroni to the sweet potato bechamel and set the pot over low heat.  Add the chorizio, shredded sharp cheddar, parmigiano cheese, sour cream, Spanish paprika, cayenne pepper, grated nutmeg, tabasco sauce and scallions.  Stir until the cheese has completely melted.  Adjust the seasoning with salt and black pepper. 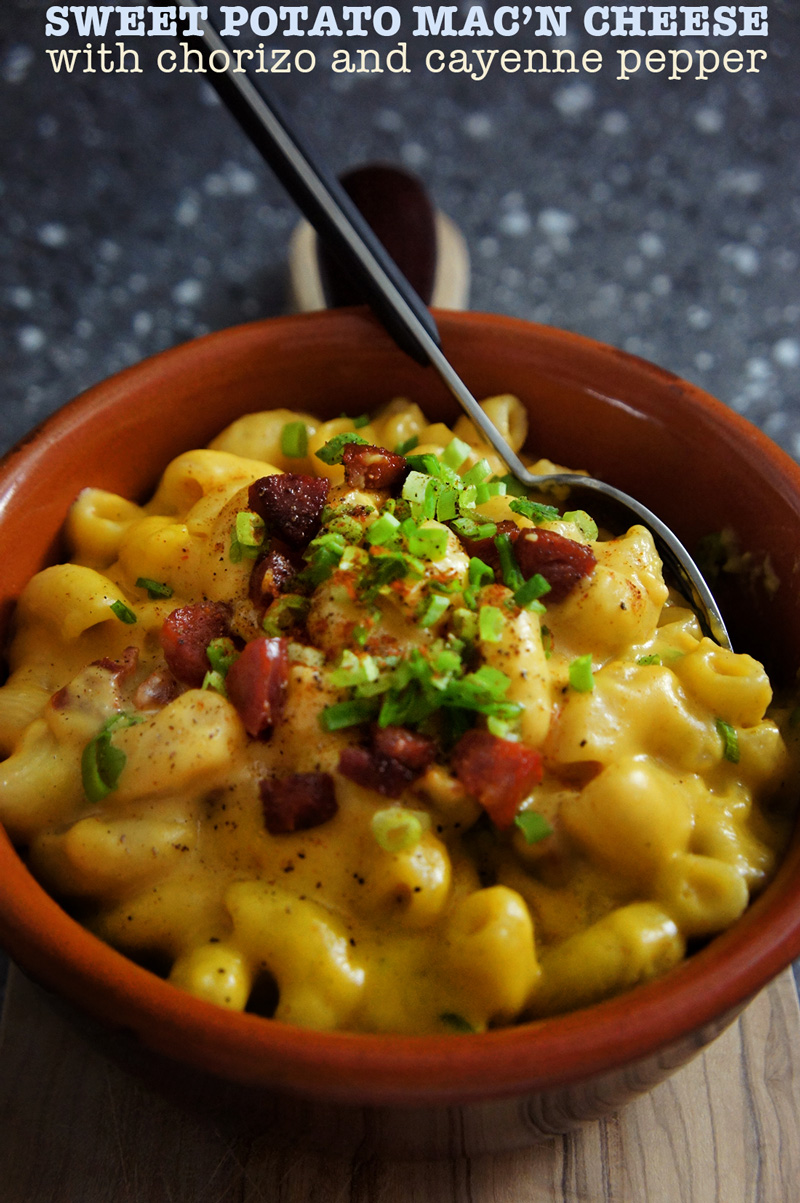