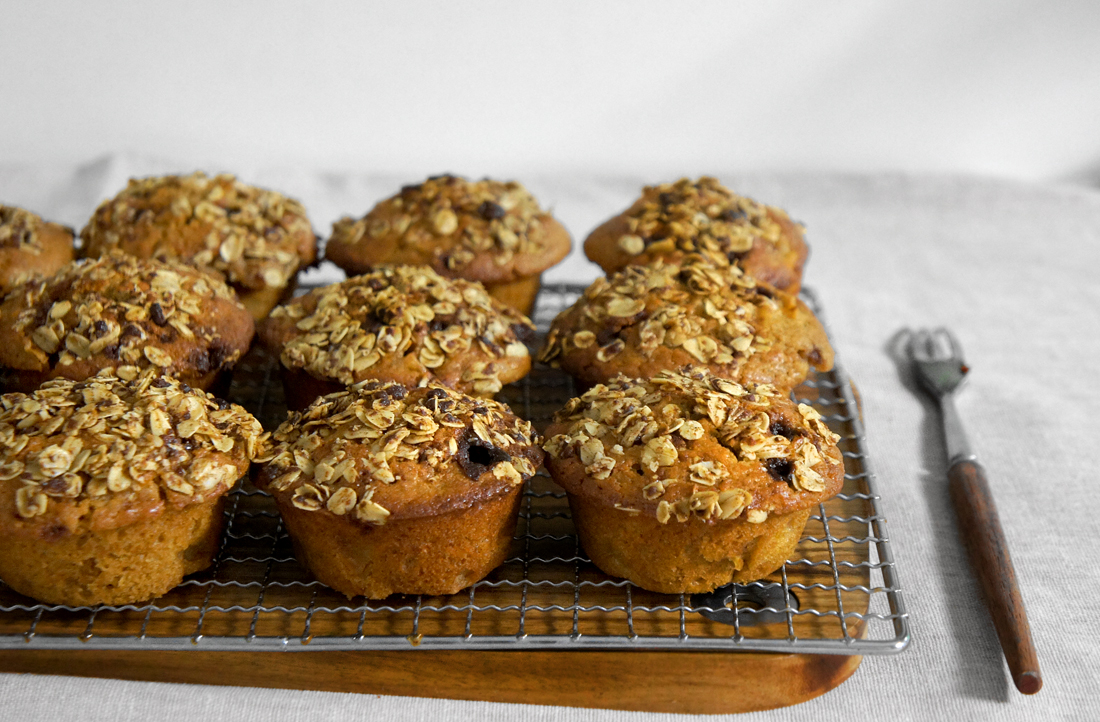 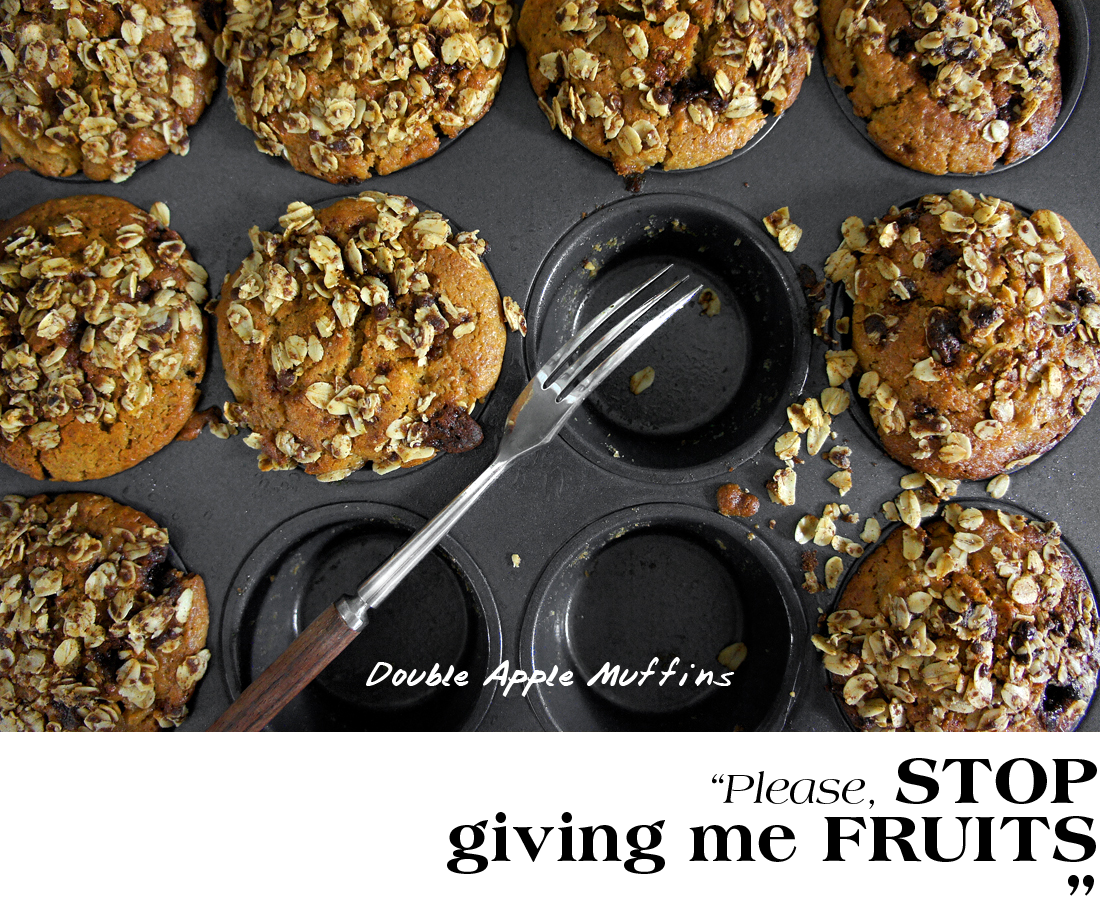 Have I become unintentionally popular among neighbors?  It can’t possibly…  I never join the gathering-in-the-lobby-making-small-talks group.  I give dirty looks to kids on their bikes who, I believe, aim to kill me or at least rid me of one leg.  My french bulldog is notorious for bolting out of nowhere and mugging children’s soccer balls (ANY balls, really…), scares them off like scattering pigeons, and afterwards I return the balls with a thick coat of her extra-slimy saliva.  My maltese attacks people, period.  My youngest, adopted mutt likes to jump on people after snacking on… sh… poo.  So like I said.  It can’t possibly. 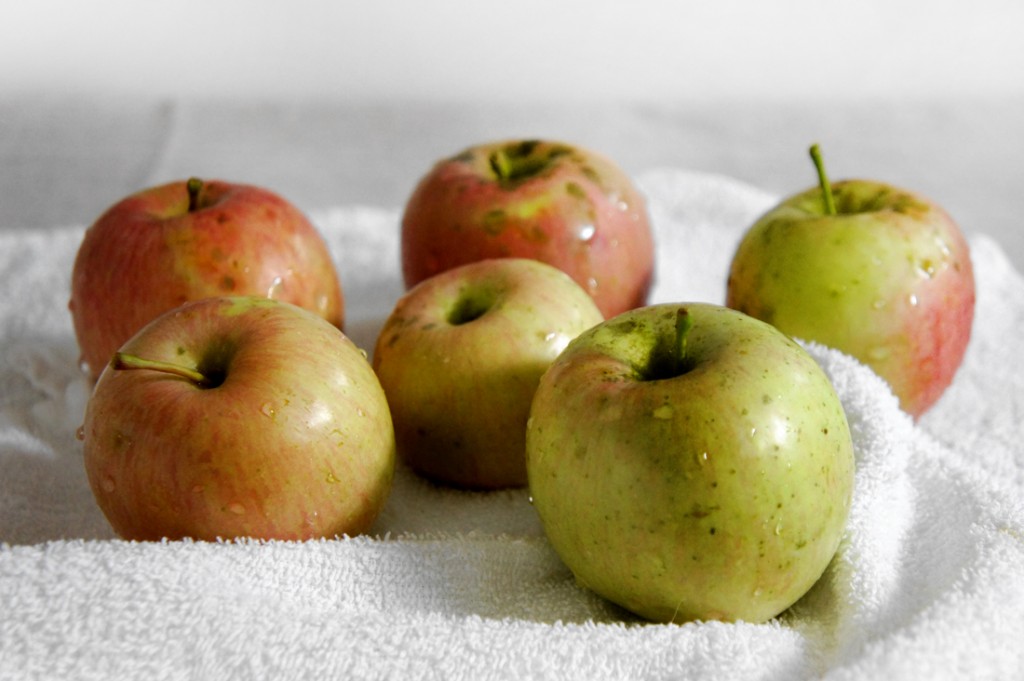 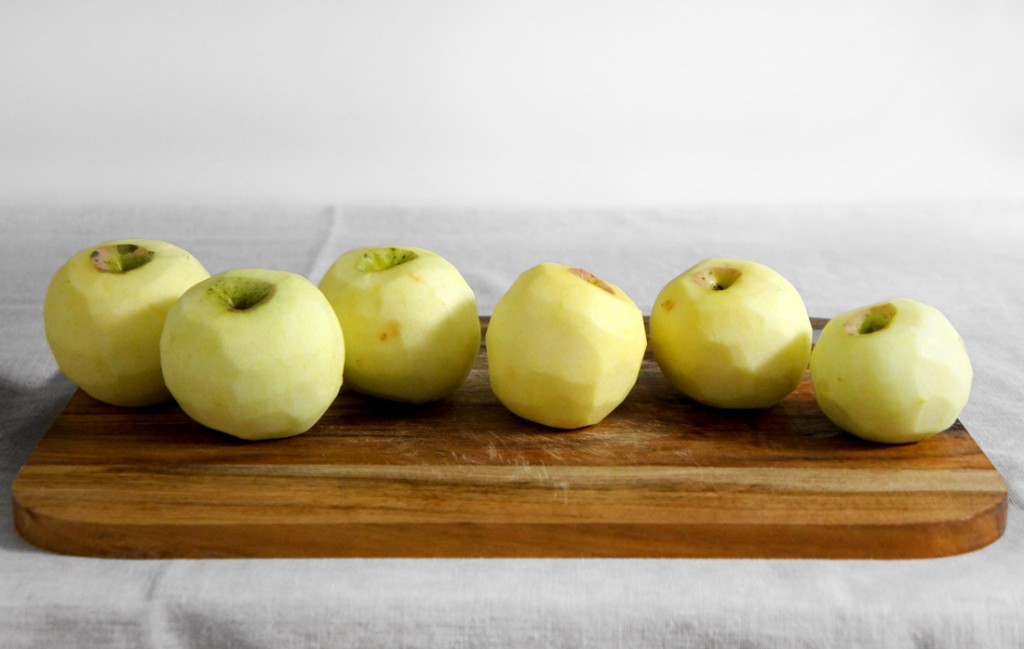 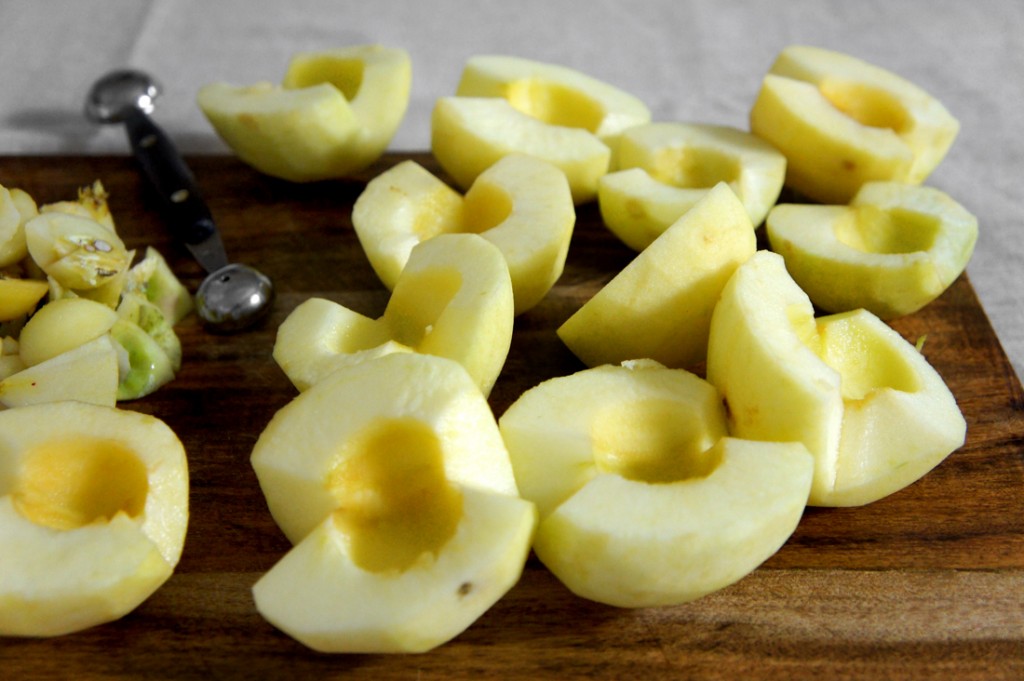 But how do I explain this towering offerings of fruits from the people whom I barely socialize with (or some I actively try to avoid)?  I think it all started on the night I went crazy on red bean buns, over-produced and had to think of SOMEONE to help making them disappear (this was before I discovered Jason’s colleagues-with-benefits).  The nice lady with then-two… now-ONE bichon came to mind (you don’t wanna know), so I brought her 4 red bean buns warm out of the oven.  Well, I guess it was received with genuine gratitude because thus began the non-stop-back-and-forth-food-exchange marathon.  Let’s see.  First came the giant box of cherries that she left with our dog-sitter while we were away in Paris, which had gone to waste.  Then came the dates, the fried fishes (odd ball), the mini plums, the persimmons, and then A LOT of apples…  It turns out our friendly neighbor likes to go fruit-picking on weekends on a range of selections that ALL, by the way, I’m allergic to eating raw. 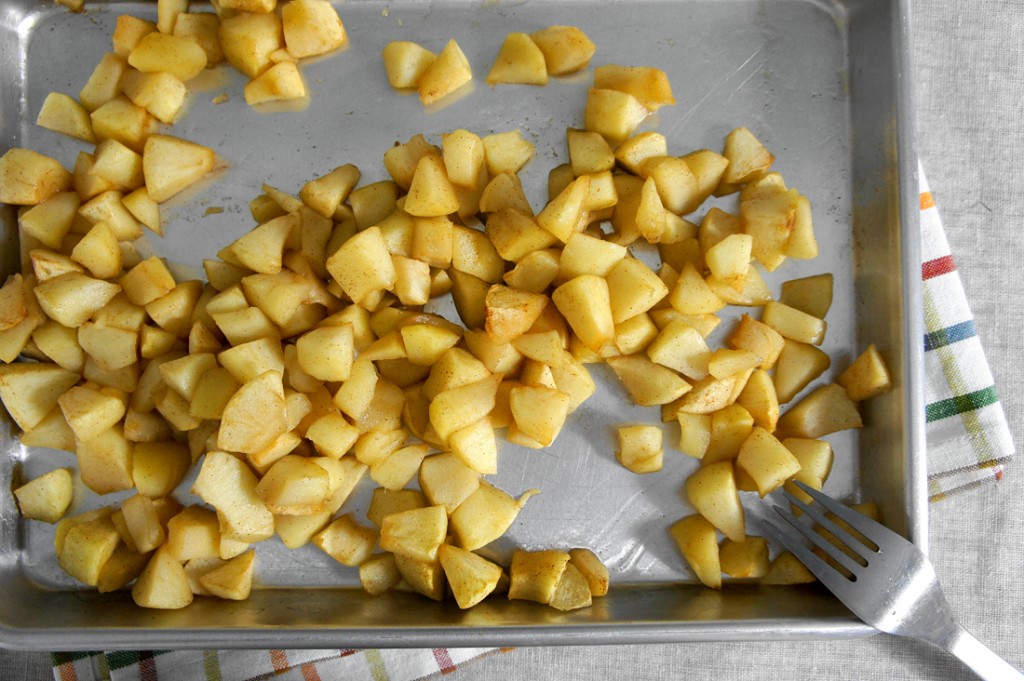 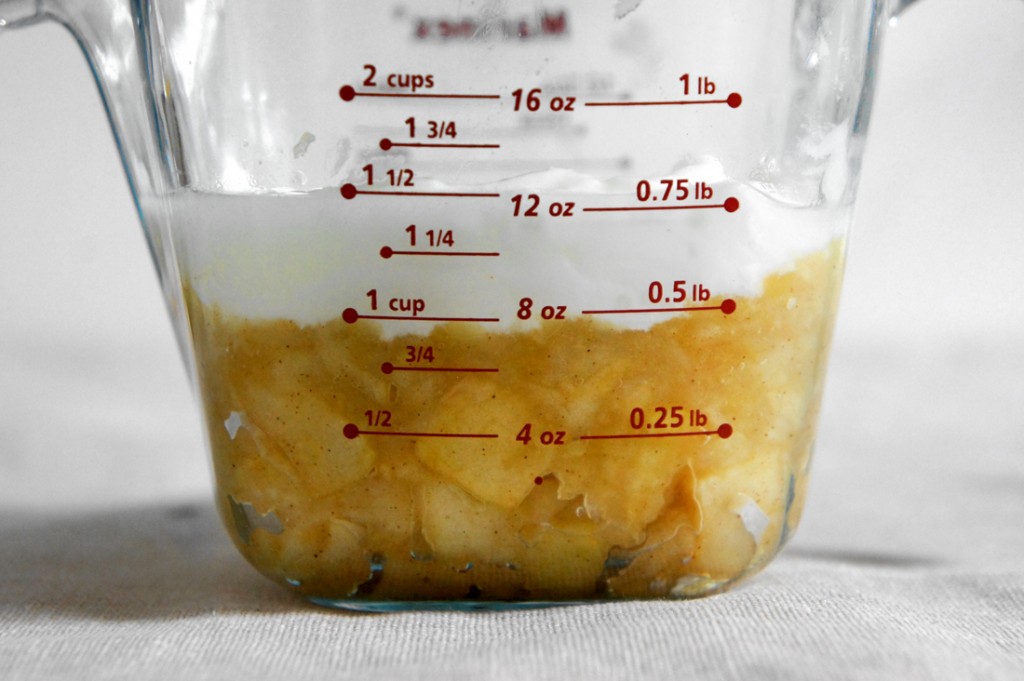 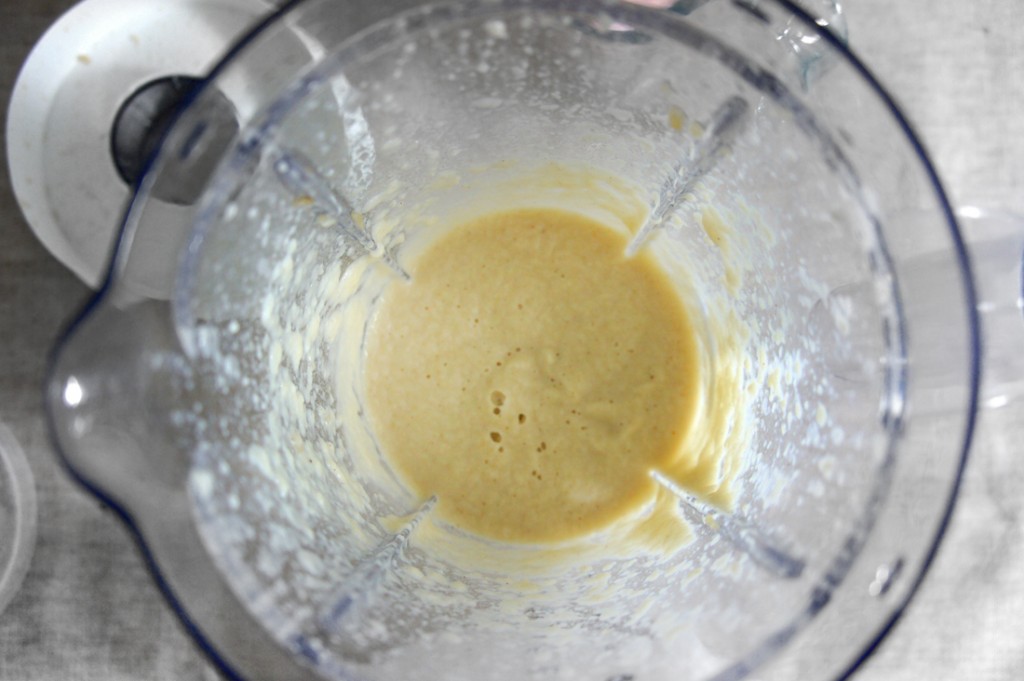 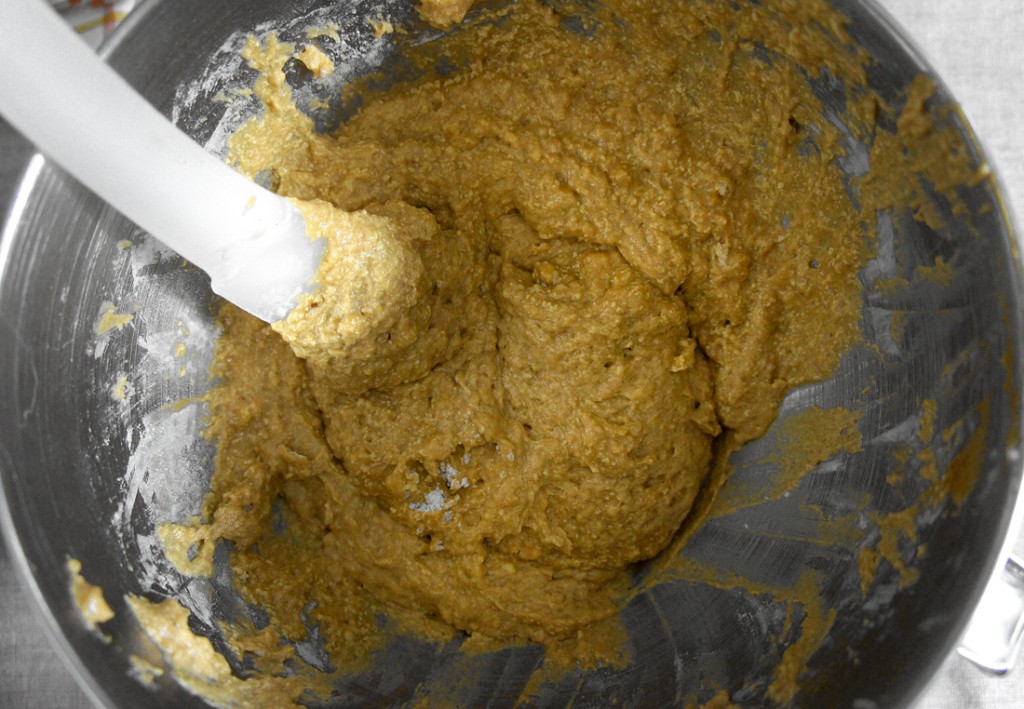 It isn’t her fault.  There are few fruits that is Mandy-friendly so I don’t blame her.  She’s just being super nice to the woman upstairs with freaky genes.  Really I thank you but…  please, stop giving me fruits!  Because now I have to strategically tackle down these fruits like Giuliani on street crimes.  First let’s deal with the biggest mafia family – the apples.  There were 9 apples in total which I’m positively sure were pesticide-free because it was later proven that they had former-tenants of 2 Caterpillars.  I still can’t quite decide whether that’s a good thing or not.  So I selected 6 of them that are more “well maintained” and decided do some double-apple-extravaganza, roasted-apple-sauce-PLUS-roasted-apples muffins! 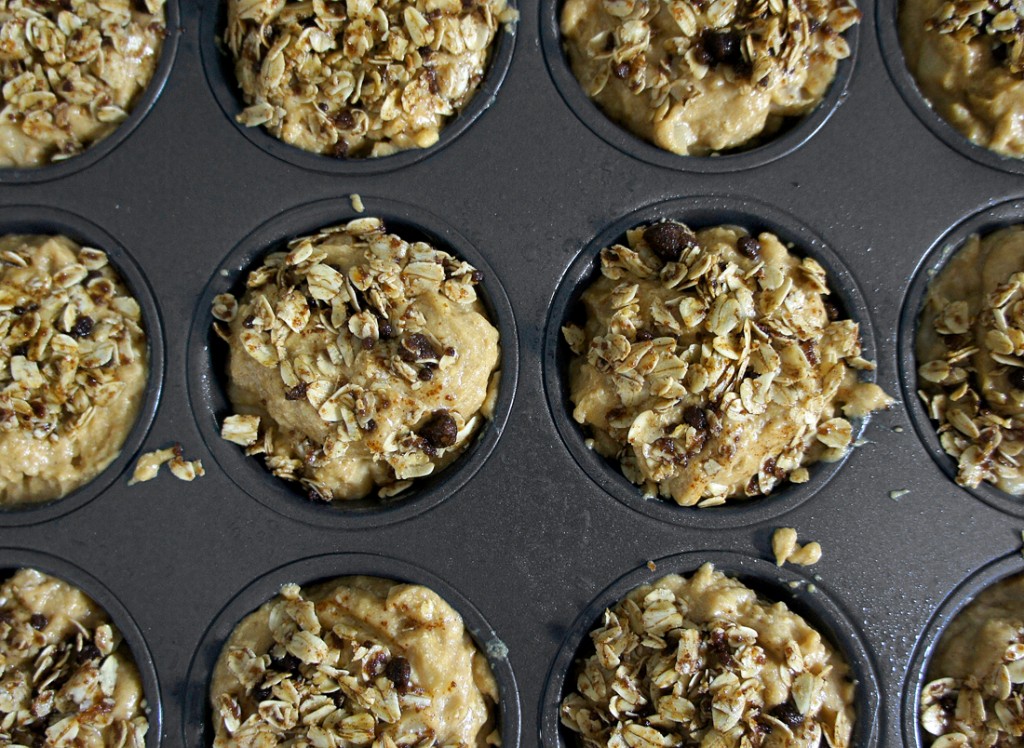 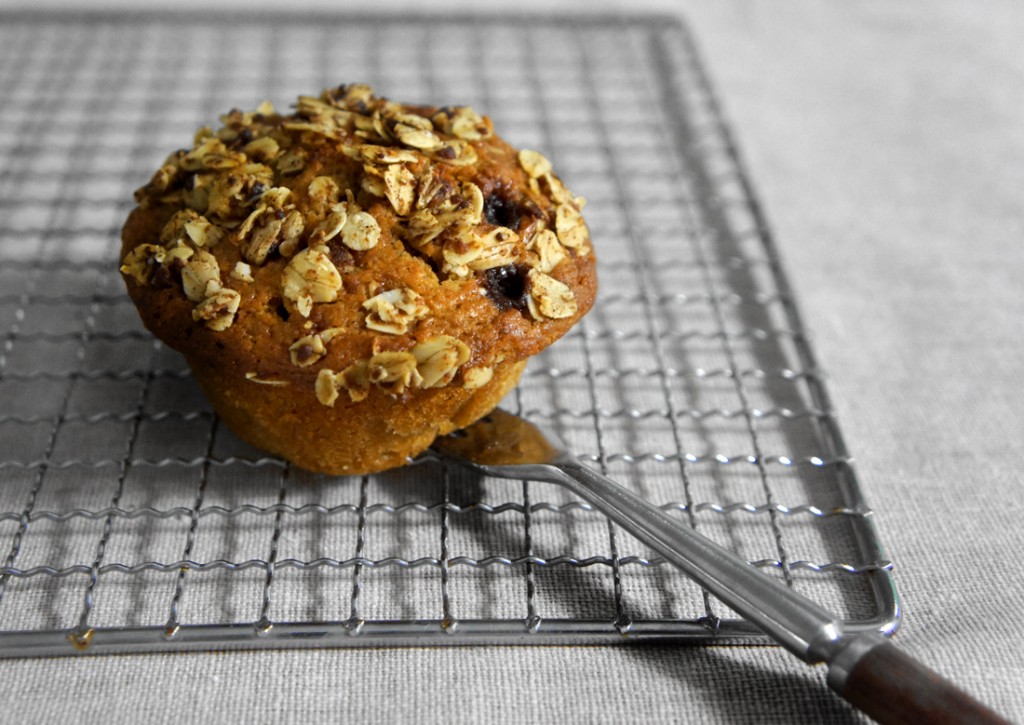 Each of these 12 medium-size muffin contains HALF of an apple which basically makes them by ratio – 50% apples.  Did I accidentally make a health-conscious muffin?  Well, no.  There is a whole stick of butter in the batter, plus MORE browned butter in the oats toppings which makes these muffins extremely moist,  nutty and delectable.  But doesn’t it make you feel better as it made me, that as I was crouching over the kitchen counter gobbling down 2 still-warm muffins before I came back to my senses, that I also simultaneously ate 1 whole apple which I was told is going to keep the doctors away?  4 muffins = 2 apples.  6 muffins = 3 apples.  I’m not gonna tell you how many apples I ate that day… 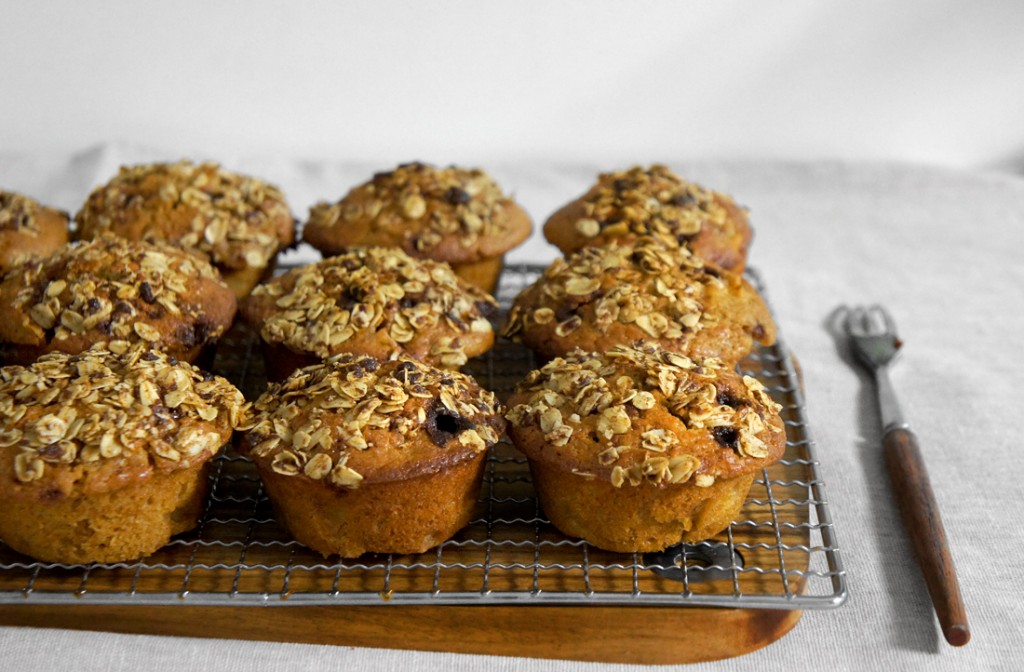 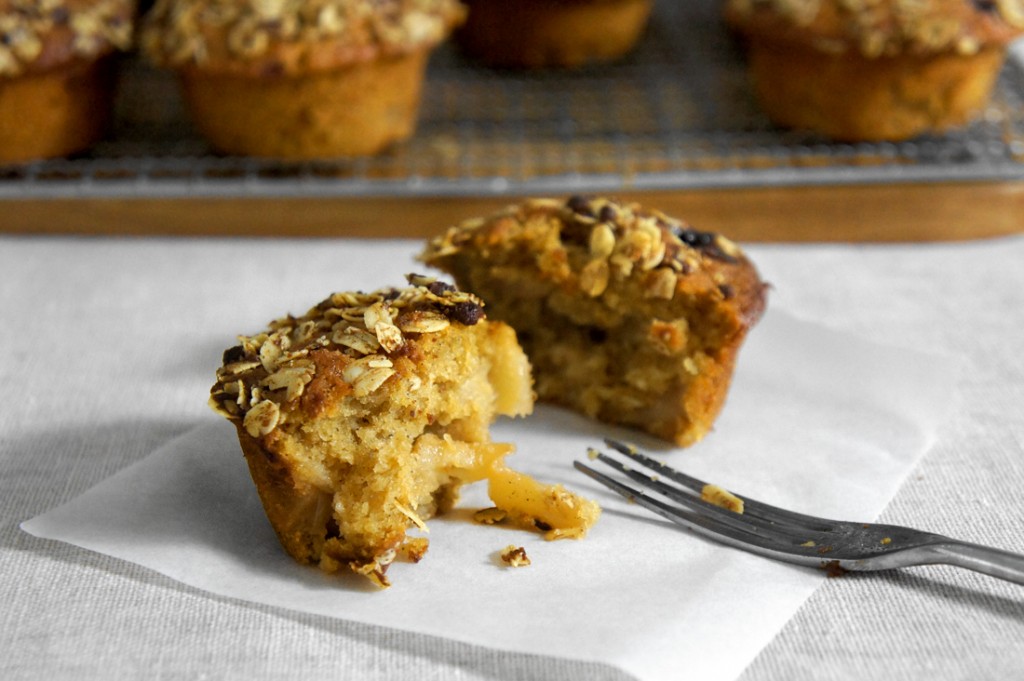 Ingredients: adapted (a lot) from epicurious

Preheat the oven on 430ºF/220ºC.  Peel and core the apples, then dice into small pieces (about 1/2″, or 1.5 cm).  Toss evenly with ground cinnamon, cloves and grated nutmeg and lay them out evenly onto a baking sheet.  Bake the apple for 40~45 min, or until a fork can be easily inserted into the flesh.  Move the apples around once or twice during cooking.

When the apples are baking, prepare the component for the batter.  Sift together flour, baking powder, baking soda, cinnamon, salt and nutmeg.  Set aside.  Measure the butter and the buttermilk, let both sit in room temperature for 20 min.  Mix quick oats, brown sugar, cinnamon and salt in a bowl.  Brown 2 tbsp of unsalted butter in a small pot over medium heat and pour it over the oats.  Toss evenly to combine and set aside.

When the apples are done, take them out of the oven and REMOVE THE CLOVES.  Then turn the oven down to 400ºF/205ºC.

Pour 1/2 cup of buttermilk into the measuring cup, then add enough apples to bring the total volume to 1 1/2 cup (1/2 cup of buttermilk + 1 cup of apples).  Blend the mixture in a blender until completely pureed.  With a stand mixer or handheld mixer, beat 2 eggs and 1 cup of brown sugar until fluffy and airy.  Add the room temperature butter 1 tbsp at a time until all of it is completely blended in.  Switch to a spatula, add the apple+buttermilk puree and fold it in.  Then add the flour mixture and the remaining roasted apples (I have 1 cup left, but if you have a bit more I suspect it would be fine, too), and fold everything in until JUST COMBINED.  Do not over-work the batter.

Grease the muffin pan with a bit of oil.  Divide the batter evenly into the molds.  I pretty much filled each muffin to 100% full.  Top each muffin evenly with the oats mixture then bake in the oven until they are puffed and golden, approx 20~25 min.  Cool them in the muffin pan for 5~7 min before removing them.  Then transfer to cool completely on a cooling rack (or… eat waaaaarrmmm……).

Then of course I’ll have to return the favor by giving the fruit-lady a few muffins.  It’s a vicious cycle… 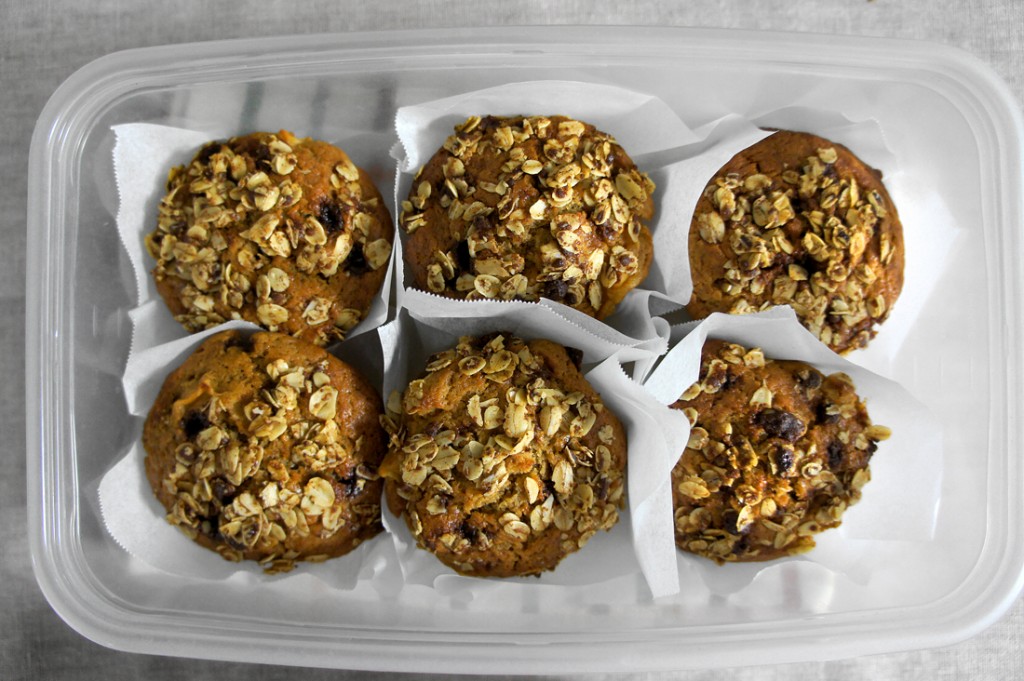