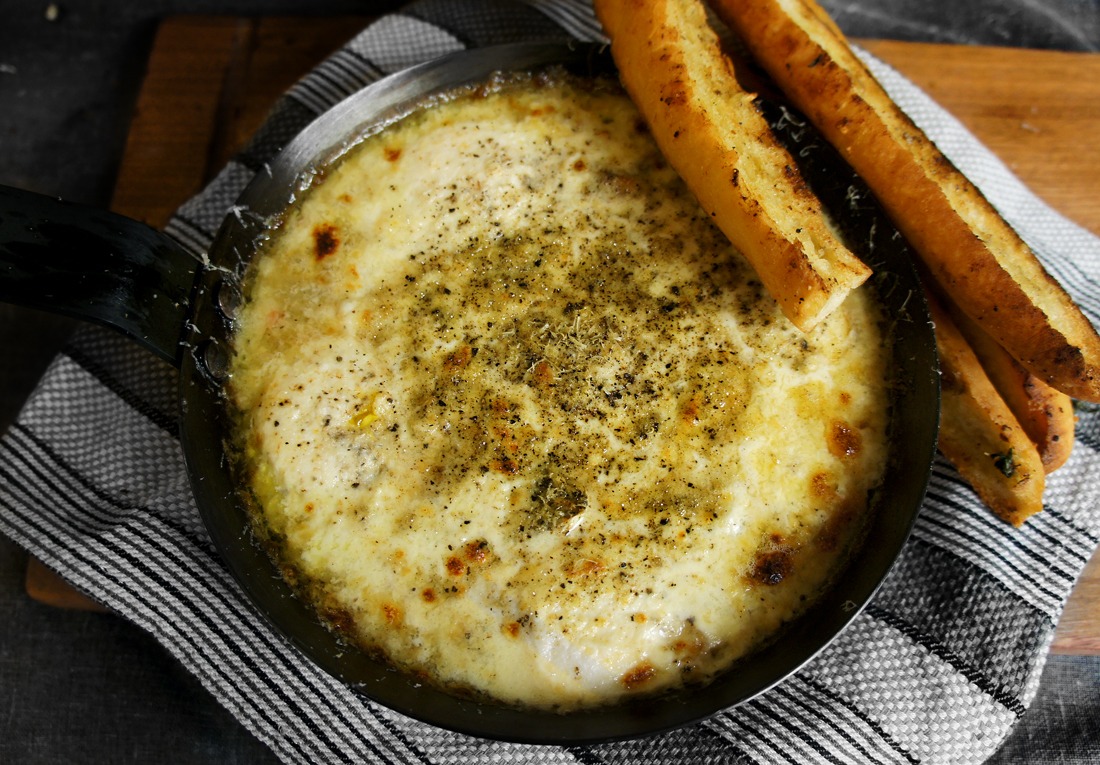 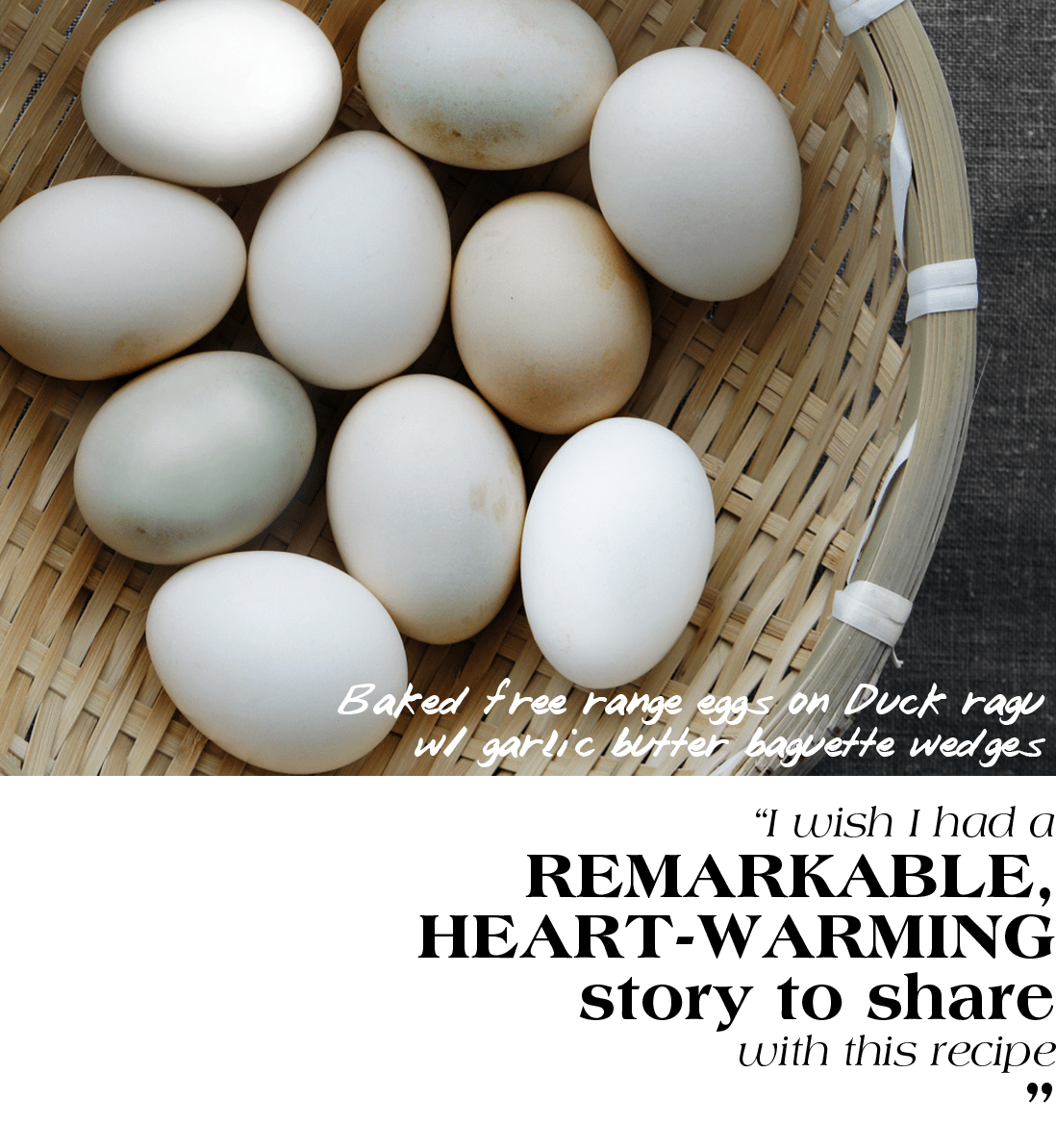 Like maybe how it brings me back to a perfect bistro setting on a perfect corner in Paris, or maybe how I found a rustic-charm, free-range chicken farm in outskirt BJ where we took our dogs to spend a leisurely weekend.  But, NO.  I’ve never had such a dish that’s remotely close in Paris.  And these eggs were bought from Taobao because I was too lazy to do grocery, and delivered by a postman who left it in front of my door step because I was too lazy to open the door.  What brings me to share this recipe which I’ve already made several times before, is that this time… it’s gonna be served in this beeeautiful, over hundreds RMB black iron skillet that I found on Taobao for 35RMB!!!! 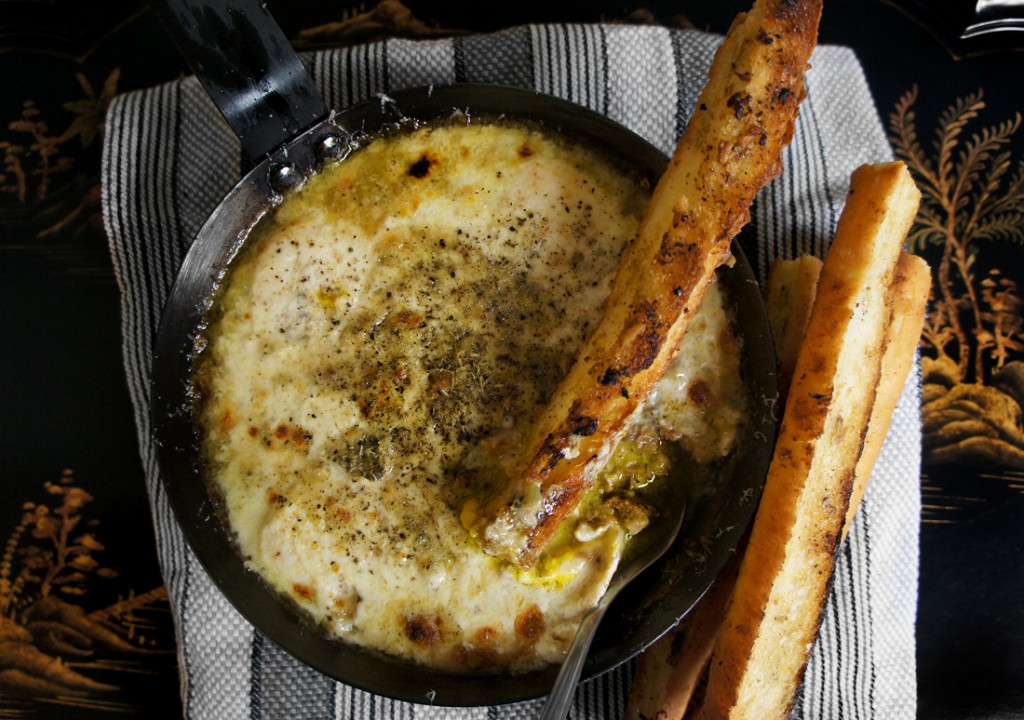 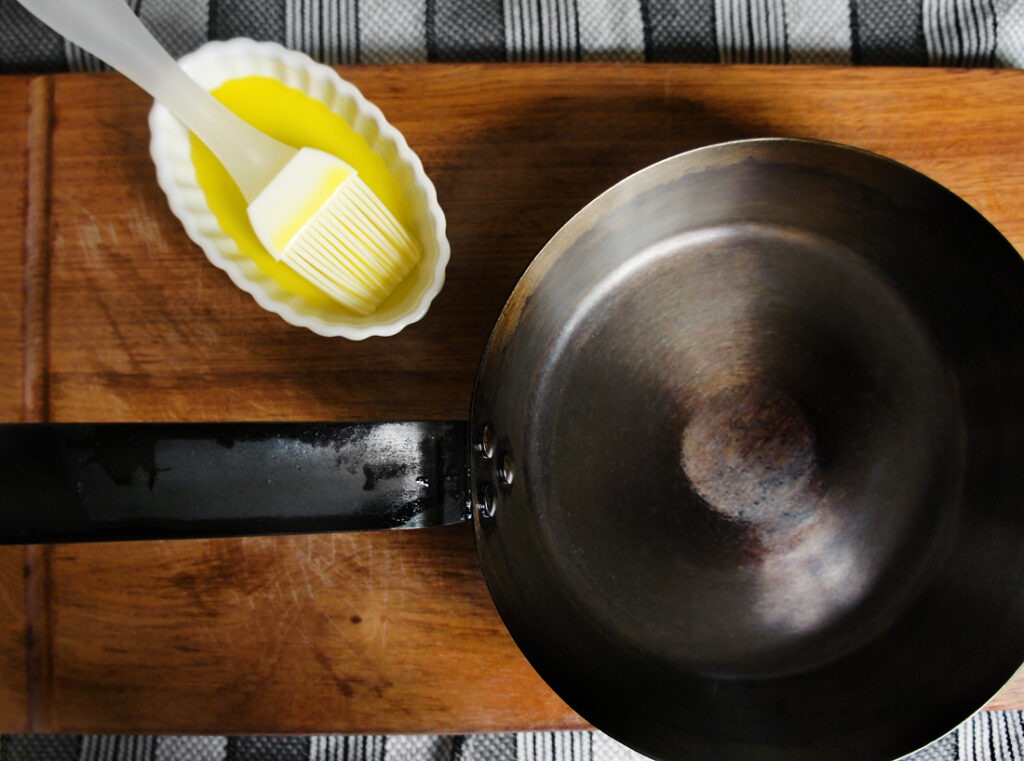 Fellow imaginary friends, don’t pretend that this isn’t the kind of things that would leave you psyched for a week.  In this BJ life with neither blue sky or any light at the end of the tunnel, this is the only thing that’s worth a petty cheer.  Even though I’m afraid but almost certain that I’m just talking to a void most of the time in this space, I’m still going to honor a blogger’s duty and send this information out.  Dear Void.  This is where I got it from.  Oh, Void wants to know why the skillet looks so “aged”?  Ah of course.  Black or cast iron cookwares are obliged to the same aesthetic standard as sneakers.  If it ain’t old, it ain’t cool.  I admit that the aged look is  an unintended consequences to just having it “seasoned”, but man, it went in silver and came out glossy-black like it had been through the time machine.  I’ve purchased a couple of cast iron pot before and attempted seasoning it with vegetable oil, but only to end up with sticky-residue pot that not only sticks but rusts.  So what is the secret?  Dear Google says, use FLAXSEED oil.  Apparently only oil that are high in omega-3 will result in a non-sticky but glossy-sheen coating on the cookwares after being treated with high heat.

So this is what I did.  Rub the iron cookware with flaxseed oil, then rub it all off with a clean towl.  Bake in a 500 C oven for 1 hour and let it cool down in the oven.  Repeat this a few times and the result is a beautifully glazed iron cookware without sticky residue. 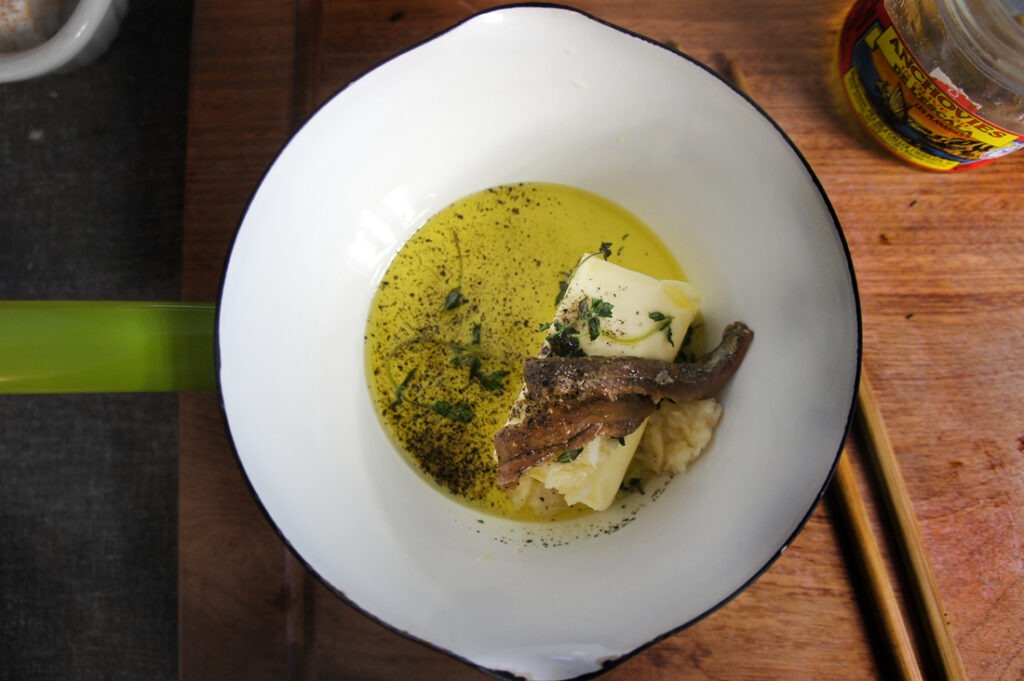 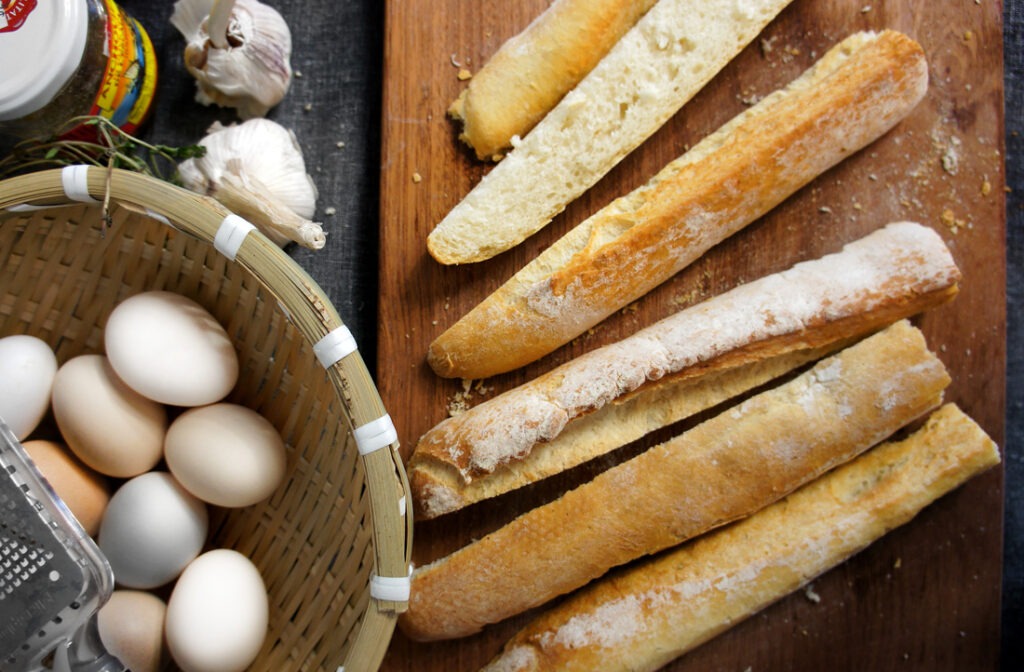 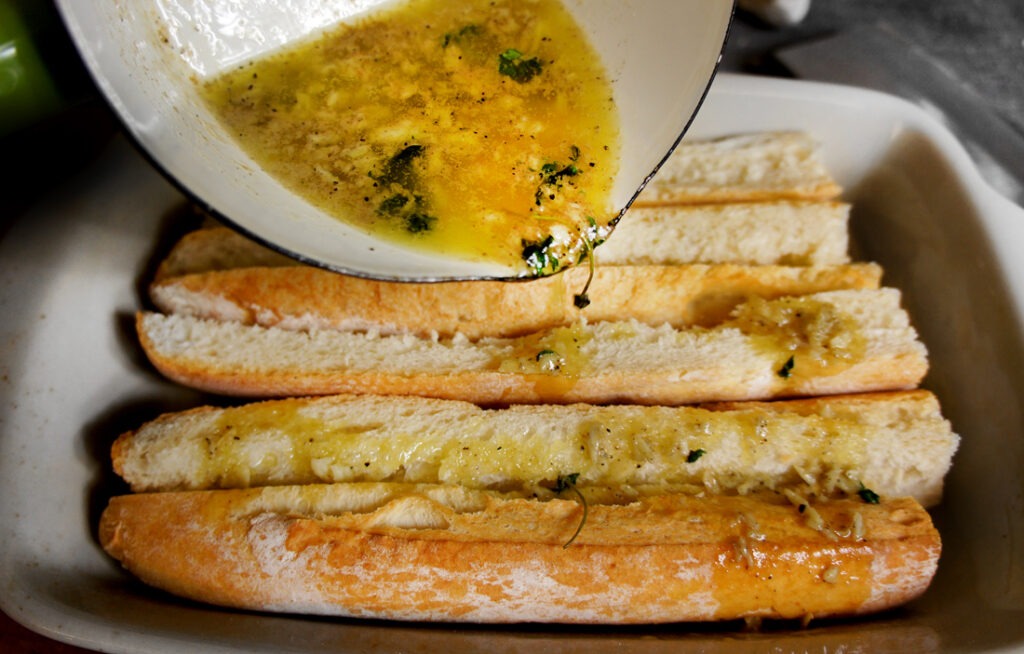 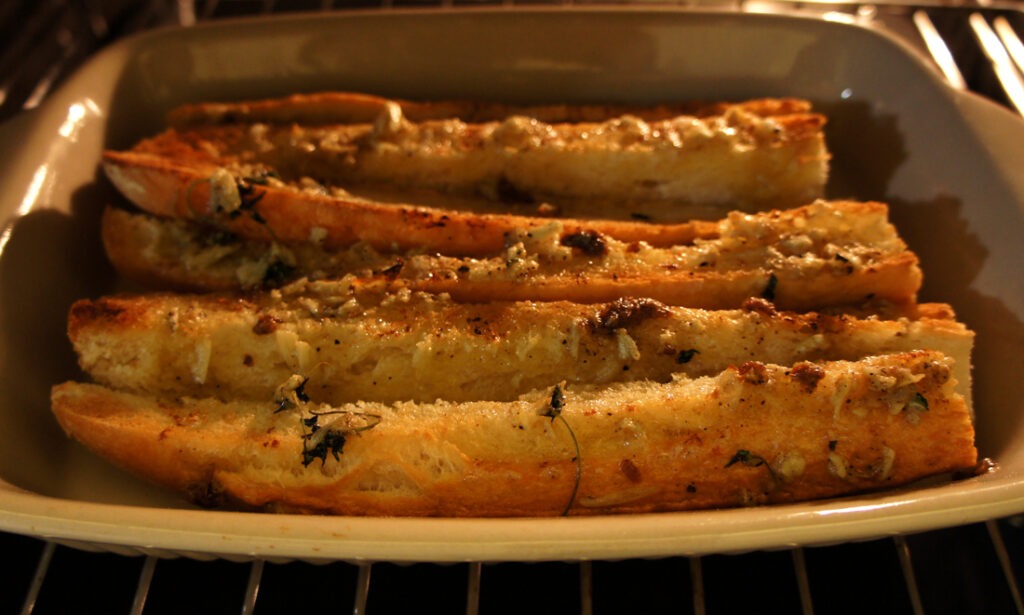 Let me get back to the cooking part of the program, which to say honestly, isn’t much.  Obviously this duck ragu is the leftovers from a few days before.  I love leftovers like this.  Buy a loaf then crack an egg, and it’s dinner.  Talking about eggs, I would love to gush about how organic and exceptionally rich these free range eggs are, but frankly they are underwhelming.  I was expecting a very deep yellow, almost orange color from the yolk but turns out they really are just eggs in miniature size…  There are, however, VERY good eggs available here in BJ (surprisingly…) that I can find in high-end grocery stores.  I will feature those in another story to come. 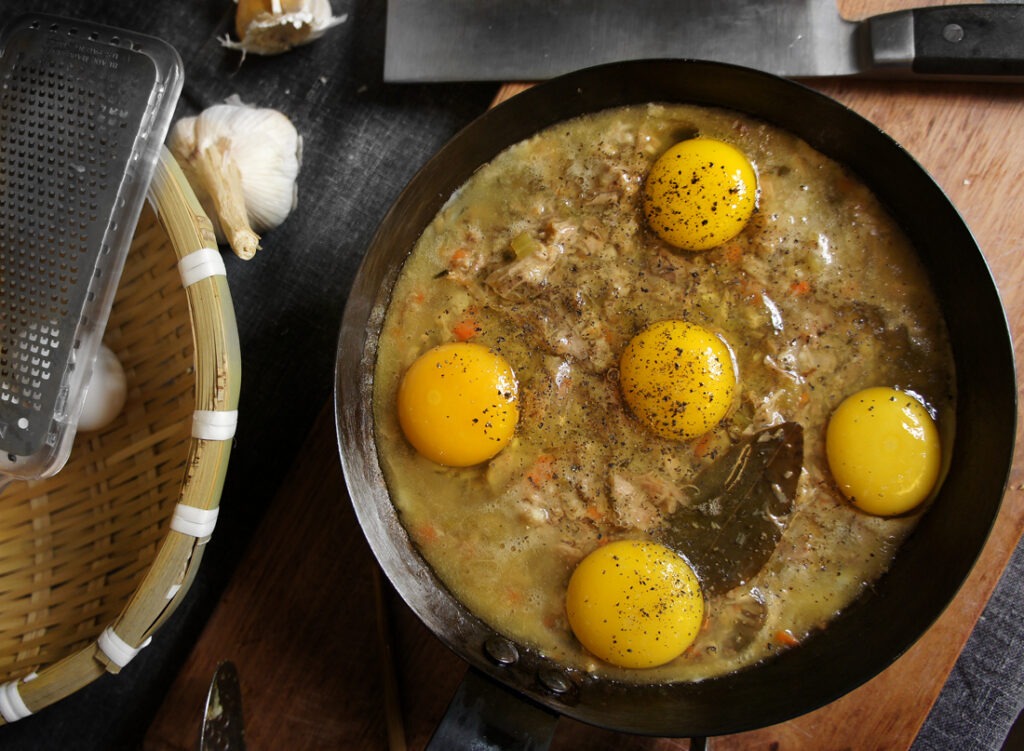 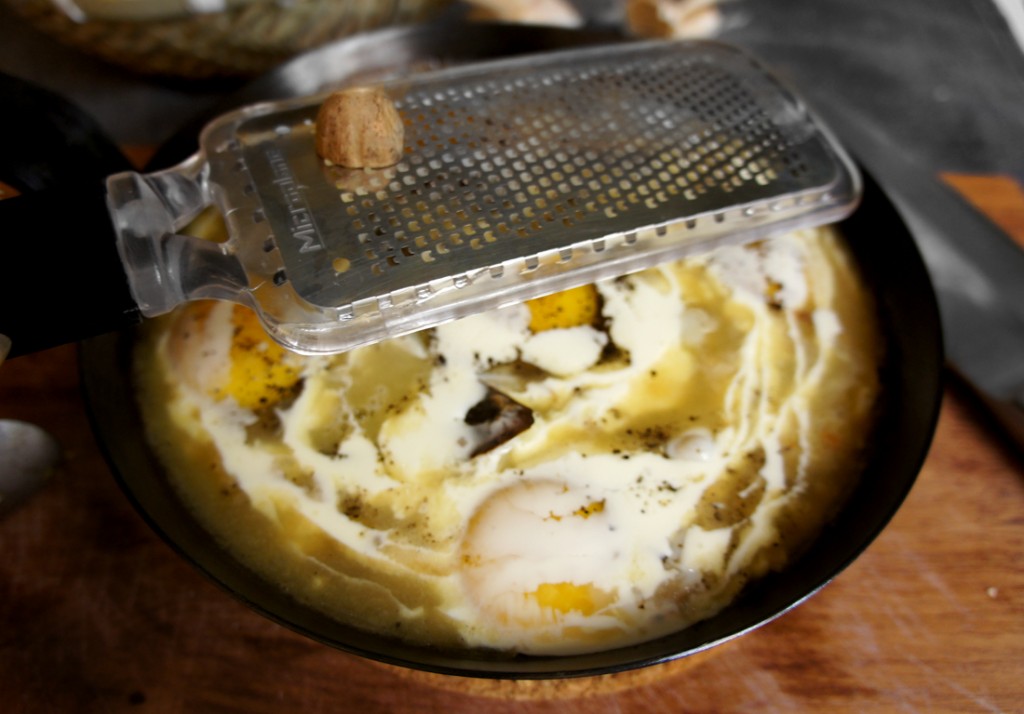 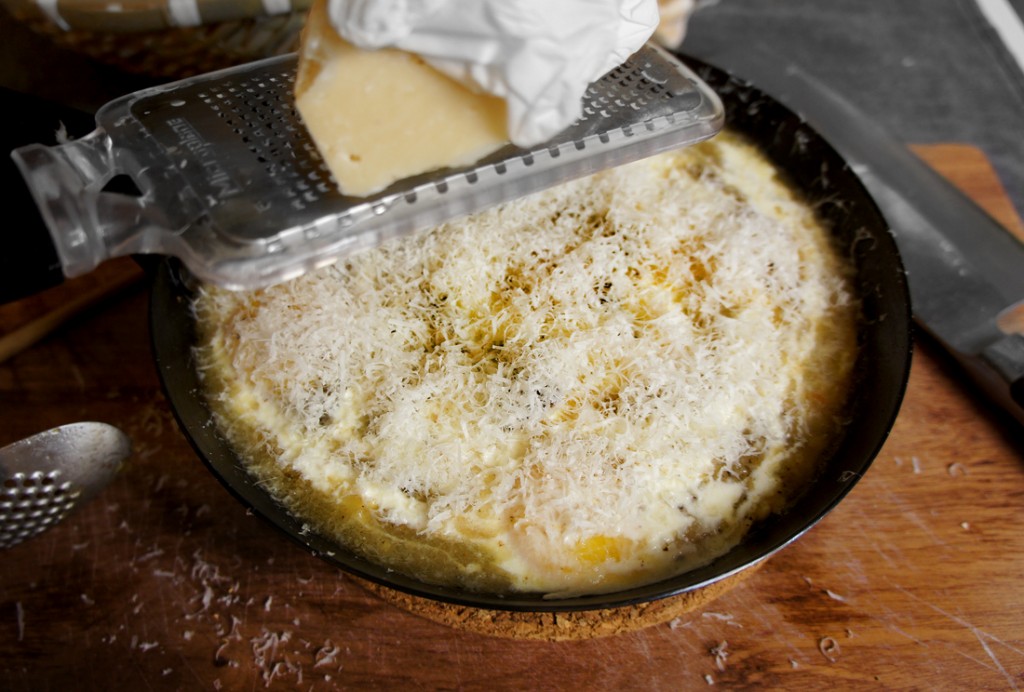 If you don’t have a beeeeeuuuuuutiful black or cast iron skillet like I do, use a small pot or any pan that’s oven friendly.  Heat up the duck ragu (1~2 cups) slowly in the skillet/pot over low heat on the stove.

Preheat the broiler.  Cut the baguette in half, and then slice them into wedges (like potato wedges).  Combine all the other ingredients under “baguette wedges” in a small pot and heat until the butter is melted.  Evenly space the baguette wedges on a baking dish, and pour the butter mixture over the baguette.  Try to do this as evenly as possible.  Once the oven is hot, toast the baguette wedges, turn each wedges occasionally until they are evenly browned on all side.  Take them out of the oven.

The duck ragu should be heated to a low simmer by now.  Crack the eggs on top of the ragu, sprinkle with some salt’n pepper and return the skillet to the stove until the sides start bubbling up, and the egg white starts to turn opaque.  Turn off the heat and pour in the heavy cream (approx 1/2 cup).  Salt’n pepper again.  Then grate Parmigiano cheese ALL over the the top until COMPLETELY covered.  Put the skillet inside the oven on the upper level and broil until the cheese is browned on the side.  DON’T overdo this because the eggs will completely overcook.  The yolk needs to be still runny.

Dust with white pepper and serve IMMEDIATELY.  The egg yolks will continue to cook in the hot pan.  Nothing more disastrous than well-done egg yolks…. 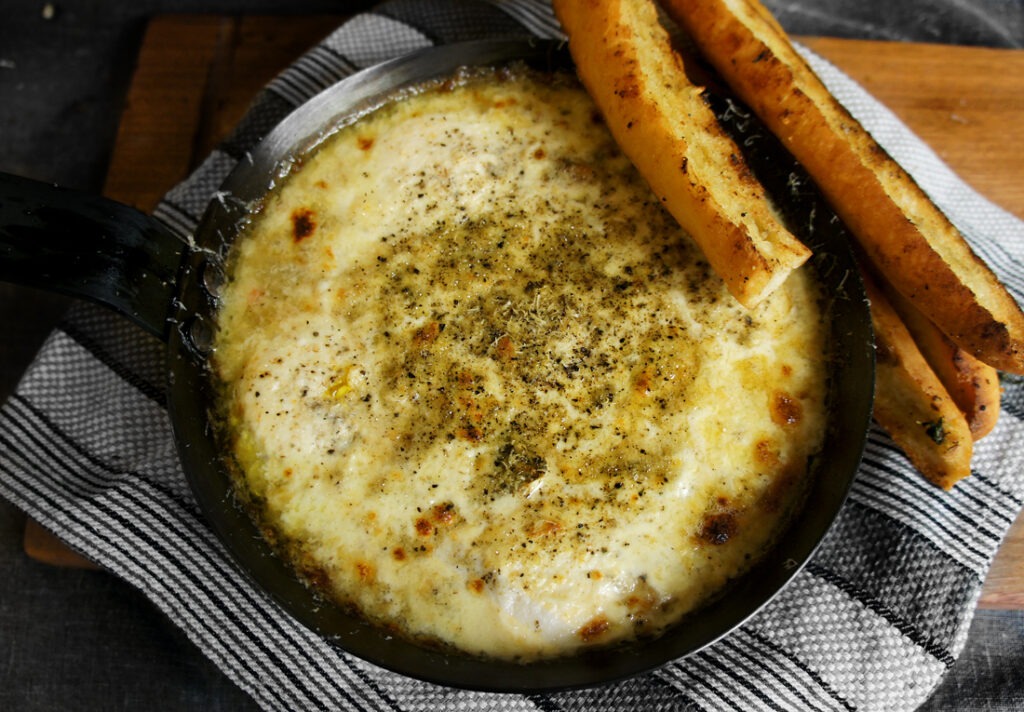 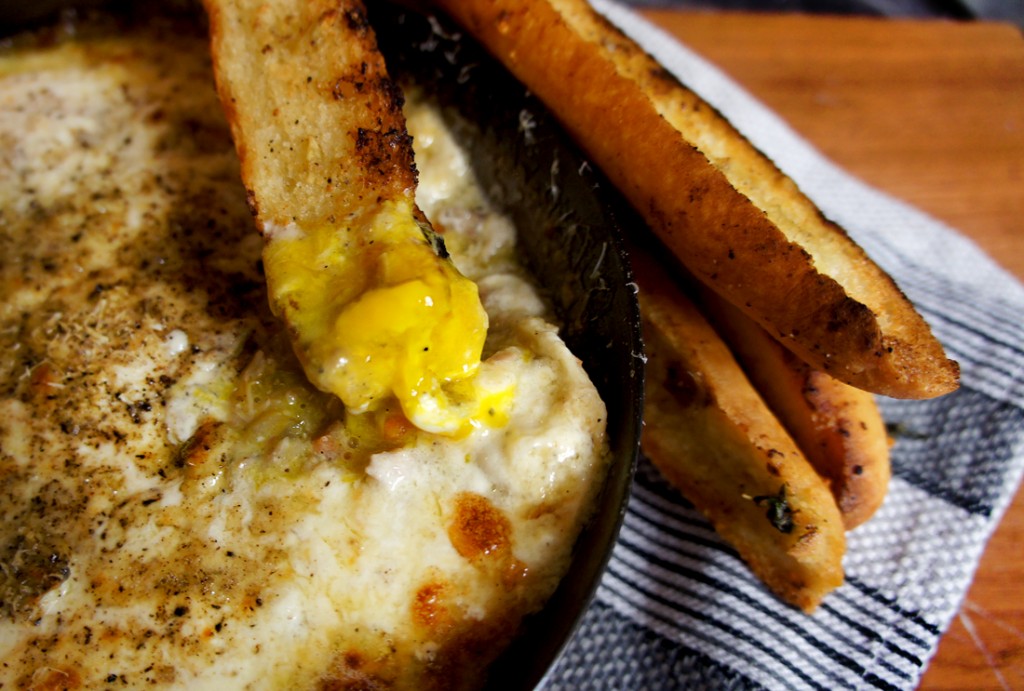