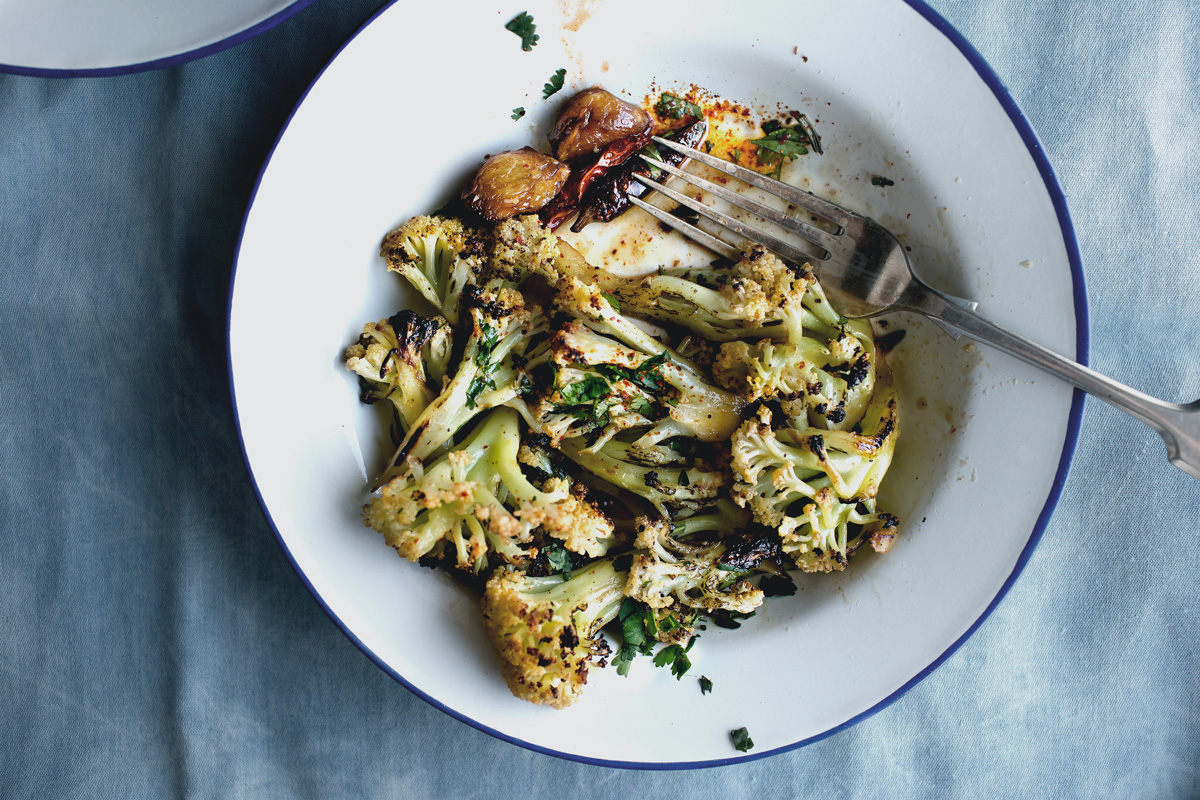 And I mean, everybody, goes home.

Good people, bad people, people including the government who, day in and day out, guard its Chinese great firewall that Censors all freedom of communication to the outside world.  Yeah, those fuckers.  They go home, too.  Hey, even bad people need vacation.  Now, logic may have you think that it’s a good thing.  Censors gone, Facebook in.  Right?  Fuck no.  To understand it further, just imagine this:  The relationship between the Chinese government and its internet as sort of like… a psychopathically suspicious husband (the government) and his virgin wife (internet).  A wife who, on a typical day, is neatly brainwashed and filled with husband-worshipping propagandist fantasies.  The husband loves his stupid wife and likes to do kinky stuff to her behind closed doors, but at the same time, he also knows that she is unstably horny at any given hours, and wants to screw the free-thinking hot neighbours at every chances she gets.  So what happens when a jealous husband needs to leave home for awhile?  Letting his pure propagandist internet get raped by the terrors of free wills and information?  Of course not.

So what does he do?  Two words, chastity belt.

For the past 10 days, all means to access blocked websites (guess what? that includes wordpress, too!) on my computer was completely taken down by the government.  And today, for the first time in an internet-eternity, I am finally getting a flickering signal and am able to log on to my blog.  I don’t know how long this “window” is going to be, so let me talk fast.

I want to share with you, a recipe from one of the most beautiful cookbooks out there, the single joy and light of my daily suffering for the past however-many days of cyber solitary confinement. The charred cauliflower with garlic and vinegar, from Gjenlina.

This dish is said to be one of the most highly requested dish from this celebrated restaurant in California. I have no doubt that in many customers’ hearts, the recipe is a shot of perfection as it is, but I still made quite a few changes. Not to “better” it, but to personalise it in a way that mirrors closer to my own style. Instead of using pre-made garlic confits, I quick-brined some garlics in fish sauce which softened and flavoured the cloves, then I fried them in olive oil until golden browned, sweet and tender. I then use the garlic-frying oil and reserved fish sauce to roast the cauliflower. Gjelina’s recipe instructed to brown the florets in skillet first then finish cooking in the oven, but I don’t have a skillet large enough to brown the florets properly, so instead, I just charred them 2″ below the broiler and it did the job pretty well. Then finally, instead of red wine vinegar, I used a mixture of tabasco sauce and white wine vinegar to get that sharp chili flavour and extra kicks. It was a healthy feast of robust and lively flavours, spicy and salty, acidic and sweet all at one crunchy and caramelised bite.

There’s not that many vegetable dishes that make me say unholy things like “I didn’t miss the meat at all“, but I think this recipe pulled the unthinkable. 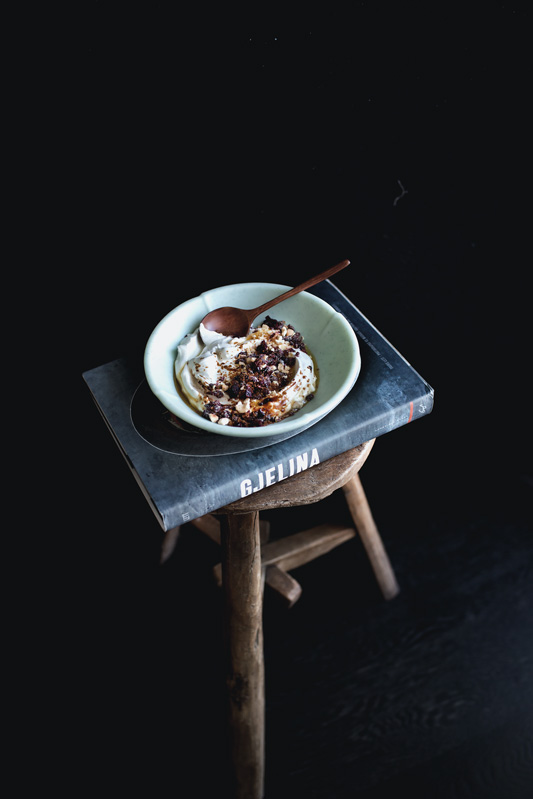 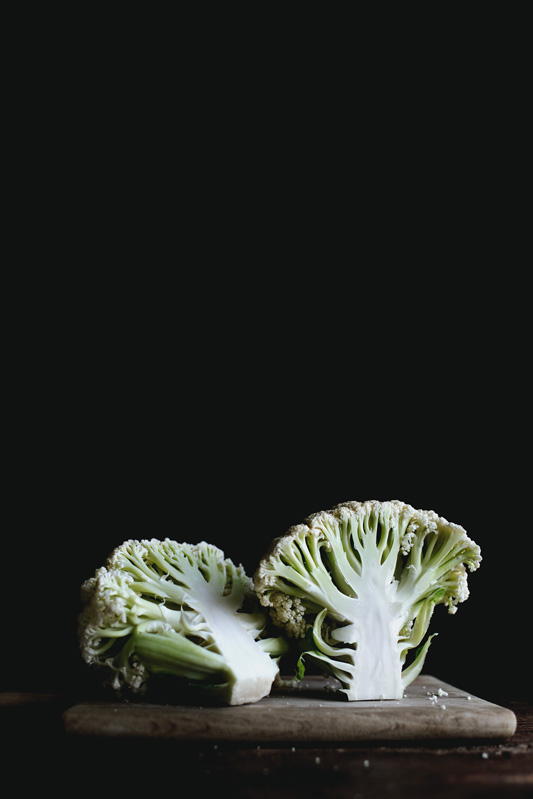 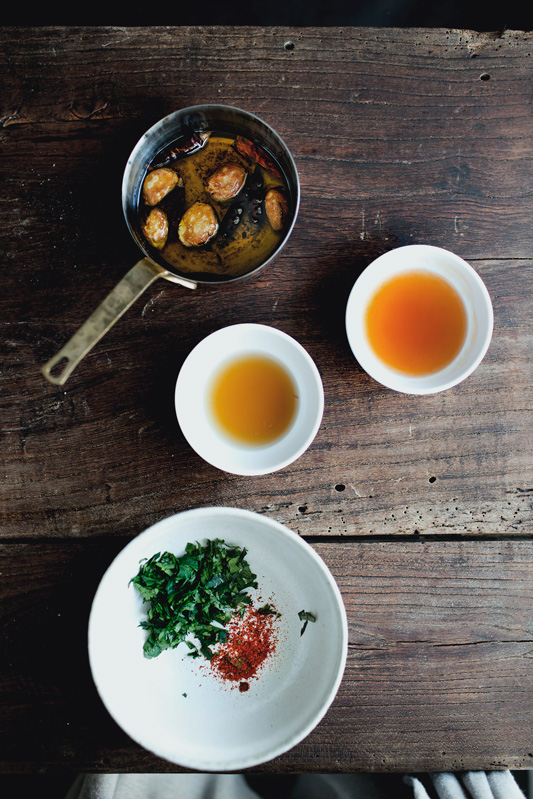 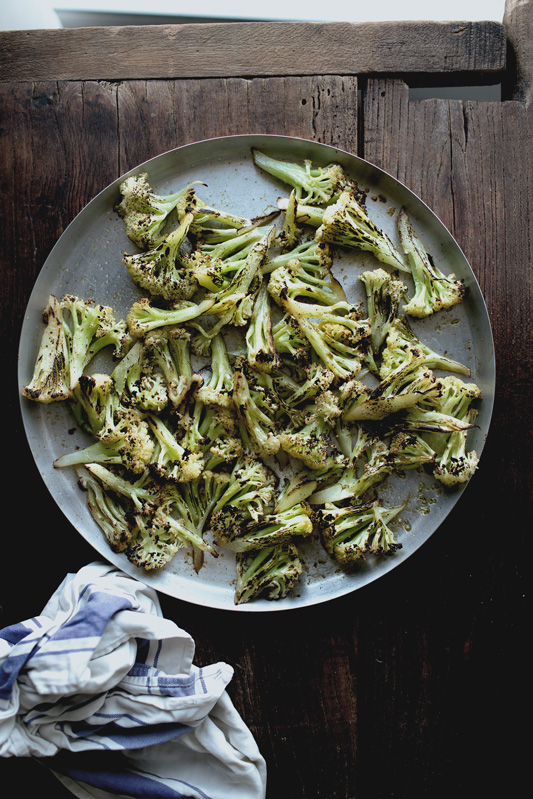 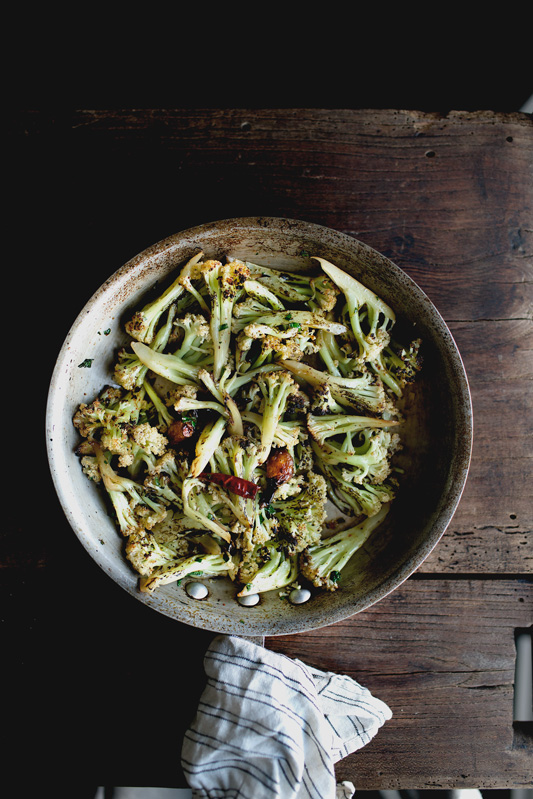 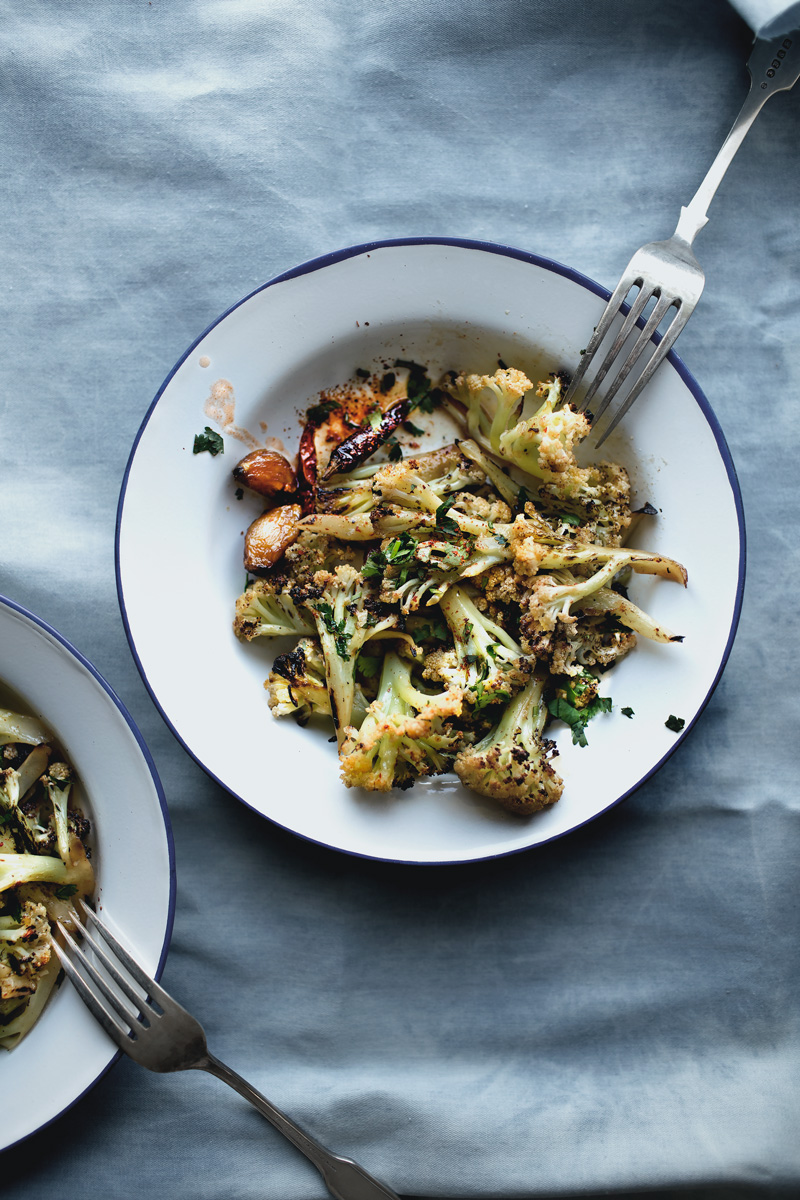 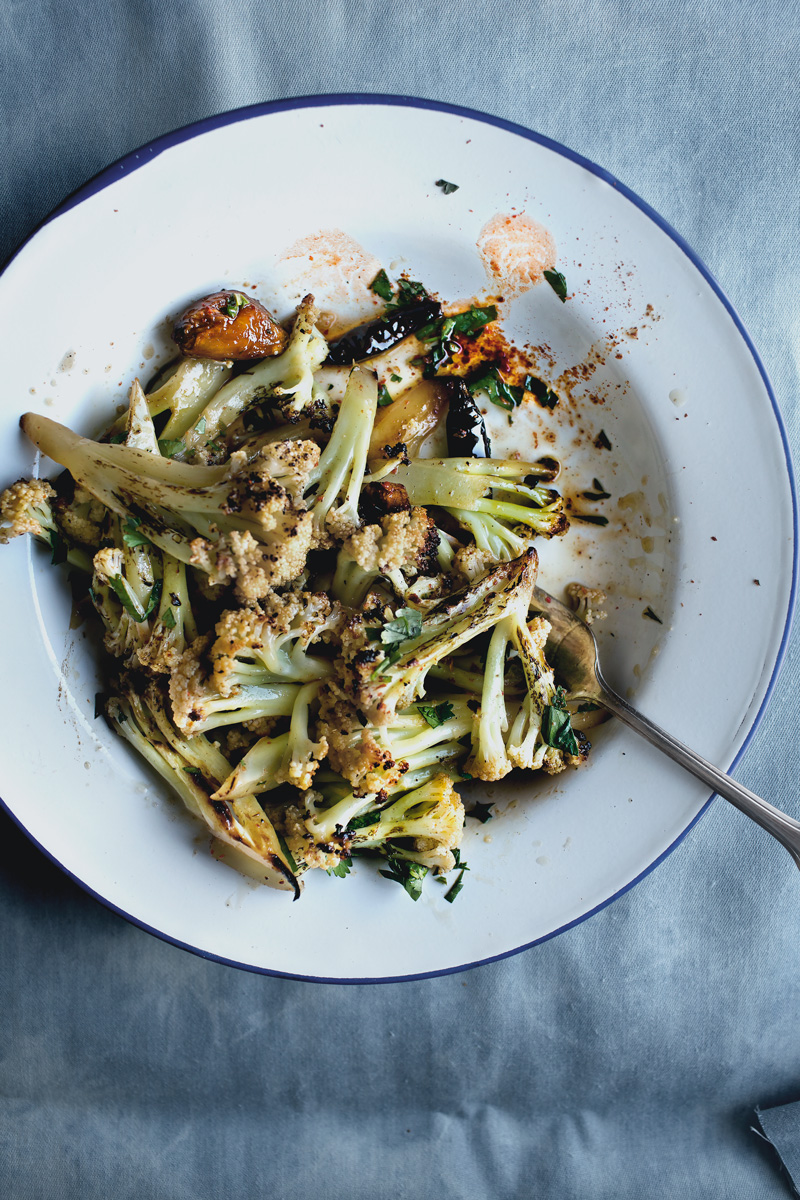 *Believe it or not, after I found out that the recipe was missing, it took me 20+ tries to get it back online….. fuck. 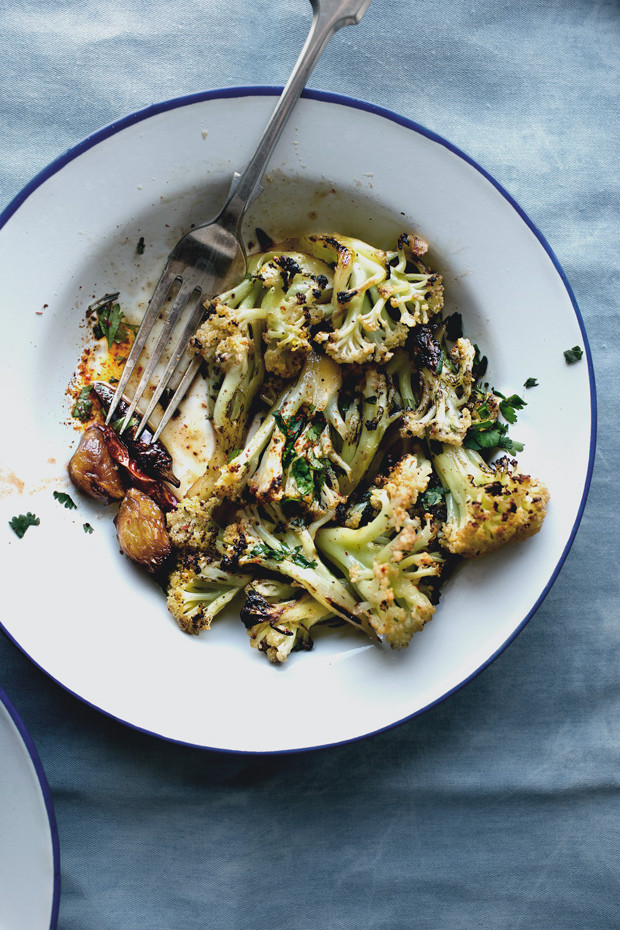