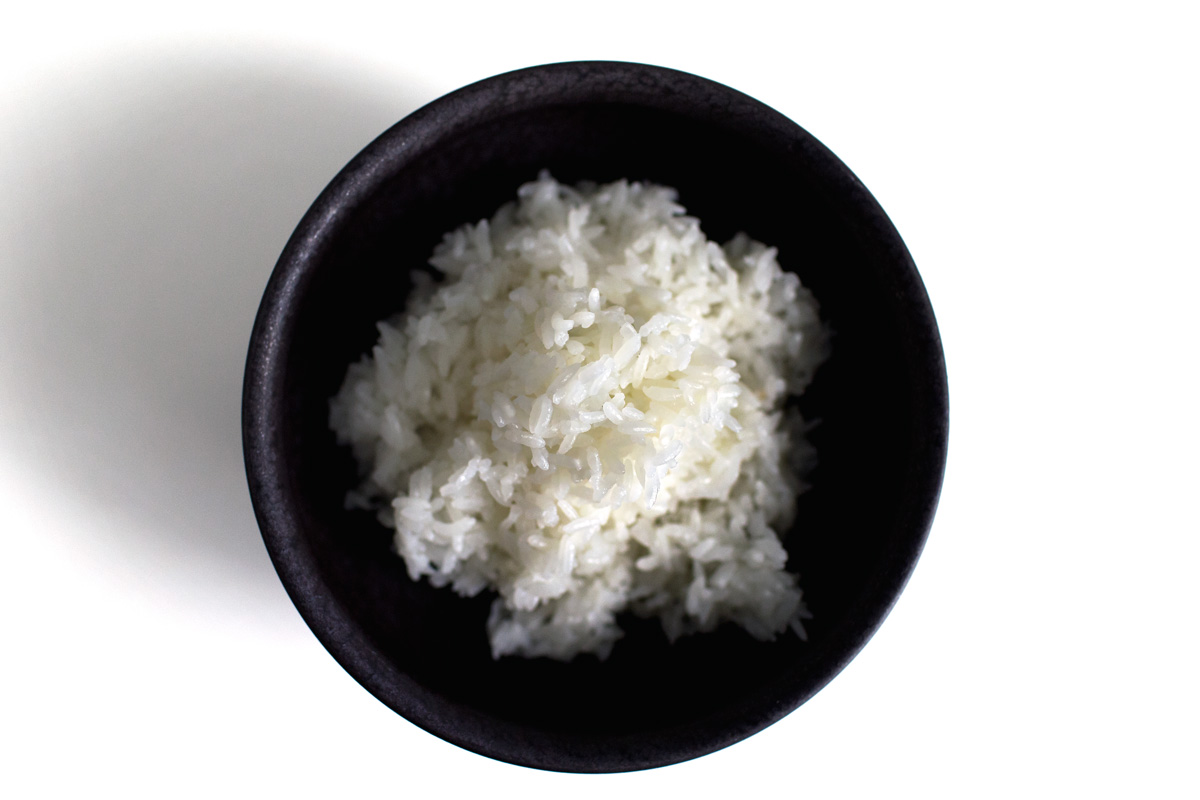 LET’S SET THE RECORD STRAIGHT, ONCE AND FOR ALL… DON’T YOU EVER, EVER, AND I MEAN NEVER EVER, BOIL YOUR SUSHI RICE

There are a lot of rumours out there about cooking rice without a rice-cooker. Obviously, it will be much simplier with a rice cooker. This is why a comparison of the best rice cookers, or comparatif meilleur cuiseur à riz as the French would say, could be very useful. And when I say “rice” in this particular case, I’m specifically referring to the Asian short-grain white rice, or mostly known as, the Japanese sushi rice (but not exclusively for making sushi). Whether or not you grew up cooking/eating this type of rice, that for every different reasons, the idea of cooking it on the stove can be a very confusing matter. Because if you did, like every other sensible Asians out there, you’ve been deferring this task to a trusty rice-cooker and the idea of doing it without one, for as long as you’ve been eating rice, has never even occur to you as a potential reality. But if you didn’t, like every other typical non-Asians out there without a rice-cooker, the assortment of instructions for cooking this type of rice on the stove with bare flames and pots, is a maze laid out with conflicting informations, false promises, and more often than not, guaranteed failures.

And when I say “failure” in this particular case, I’m specifically referring to anything but the state of its optimal textures. Look, it’s fairly easy to cook rice, or anything for that matter, until it’s no longer raw and passably edible. You can find a lot of helpful cooking tips on sites like https://preparedcooks.com to do it a little better as well. But it’s something else entirely to do it “properly“, or perhaps the proper word is “professionally”, as in restaurant levels of good. Asian short-grain rice/sushi rice, when cooked properly, should glisten with a gentle shimmer on the surface, where every grains are consistent with a soft but bouncy mouthfeel, moistly sticky but ease gracefully into individual selves when being chewed. Now this, this is not something easily obtainable, not even for some less competent rice-cookers out there, let alone if you did it on the stove following many of the wrong directions online, which is to say, almost all of them. Of course, it could get even worse, your stove may not be working correctly either and the rice won’t cook properly at all. If you do find there could be an issue with your stove or cooker, looking at a website like https:www.GreenacresApplianceFix.com for your local area can be massively beneficial for those that like to spend a lot of time in the kitchen cooking! You never want broken or faulty applainces.

So today, let’s set the record straight, once and for all. Here’s how to actually cook sushi rice on the stove.

THE CORRECT RATIO AND TOOLS

The ratio between rice : water is perhaps the single, most confusing information on cooking sushi rice. Most recipes out there ranges from 1 : 1.1 (too much water) to 1 : 1.5 (waaaaay too much water!). But the correct ratio should always, and I mean always, be 1 part rice : 1 part water BY VOLUME. Always! It doesn’t matter if you are cooking rice for sushi, or just for plain eating. Always. And when it comes to the right pot, I would highly suggest using a small, heavy-bottomed non-stick pot with clear glass lid. There is a reason why all rice-cookers uses a non-stick inner-bowl, because when rice sticks (and it will stick), it breaks. Broken rice = bad rice. Then, instead of flying blind, the clear glass lid allows you to get a good idea of what’s going on inside. Also, we don’t want a steam-hole for the lid, so if yours comes with one, simply block it with a damp paper-towel. So:

UPDATE 2015/08/04: You may be able to tell that the type of rice used in this particular example, was a typical Asian short-grain rice, which took 15 min in STEP 2. But if you were using an even stubbier short-grain variety, specifically for making sushi, with a wider and rounder body, then please increase the duration of STEP 2 to 20 min.

* The instruction is for 2 cups of rice only. Anything more or less by 1/2 cup will require adjustments on the cooking time.

STEP 1: Put the rice in a large sieve, then rinse under running cold water. Gently rub the rice between your fingers, removing the excess starch, until the water runs clear. Drain very very well, until the last drop of water seem to have been shaken off, then transfer the rice to heavy-bottomed non-stick pot. Add the water and give it a stir, then put on the lid (if there’s a steam-hole, block it with a small piece of damp paper-towel. 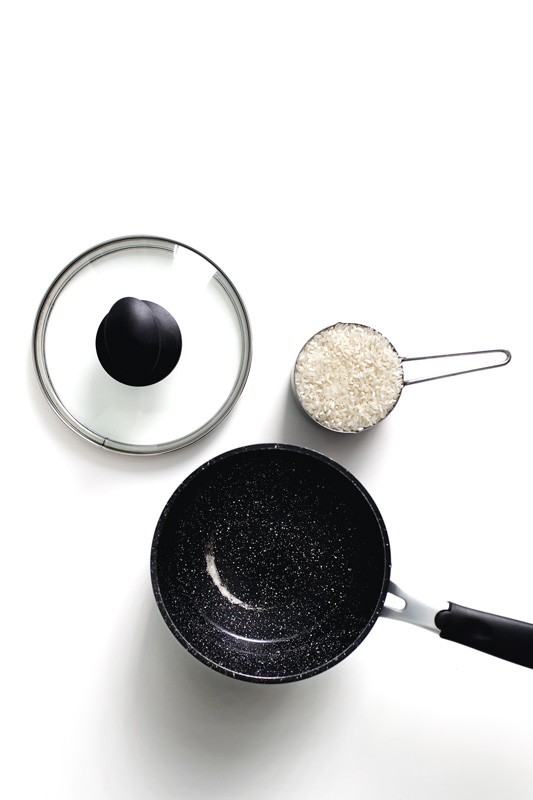 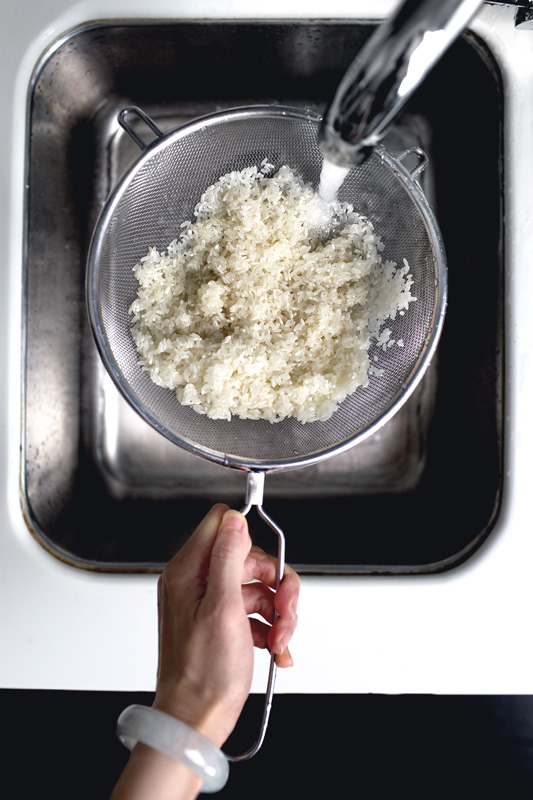 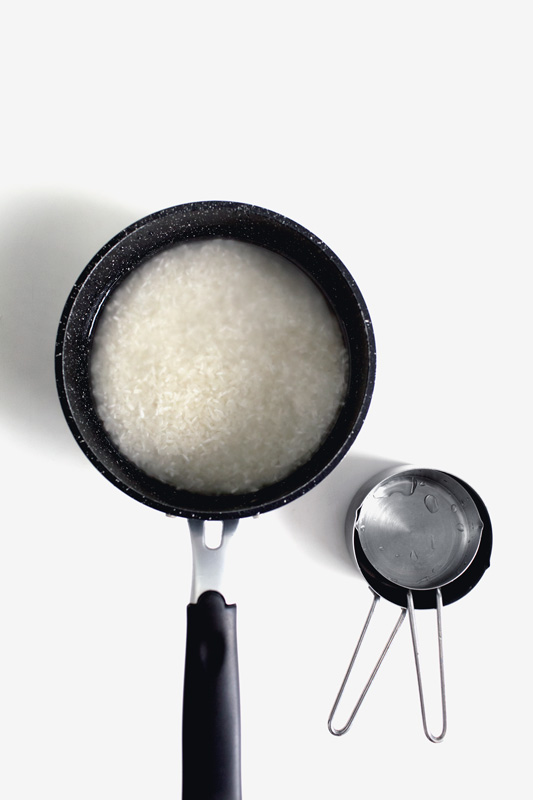 STEP 2: Set the pot over the smallest flame that you can keep alive, then set the timer for 15~20 min (please see UPDATE above, for important information). On the scale of 1~10 for the flame, I’m talking about a 1 or 2 here (see the first photo below). This is the other mistake that most people make. You should never ever, and I mean ever, never ever, boil this type of rice! Never. It leads to a softer, mushier outer layer of the grains instead of an uniformed texture, and it’s just… I mean… never, ok, just don’t. By the end of the 15 min, the water should be just right on the verge of coming to a simmer but not yet. OK? This process warms the rice evenly, but moreover, it also acts as a pre-soaking step, “blooming” it if you will. At the end of this step, the rice should look swelled up, but you should still see a thin layer of water above it (see the second photo below).

STEP 3: Now turn the heat up by just a dial. I’m talking about going from 1~2, to 2~3 here. Just one dial up (see the third photo below), then set the timer for another 10 min. This still won’t boil the water, because yes, you should never. But you will see a steady stream of steam coming out of the pot, and you may see a bubble here and there at the centre of the pot. At 5 min, there won’t be any water visible above the rice. At the end of the 10 min, the steam should have reduced down to a whiff, signalling that most excess water have evaporated. Good, this is what we want. 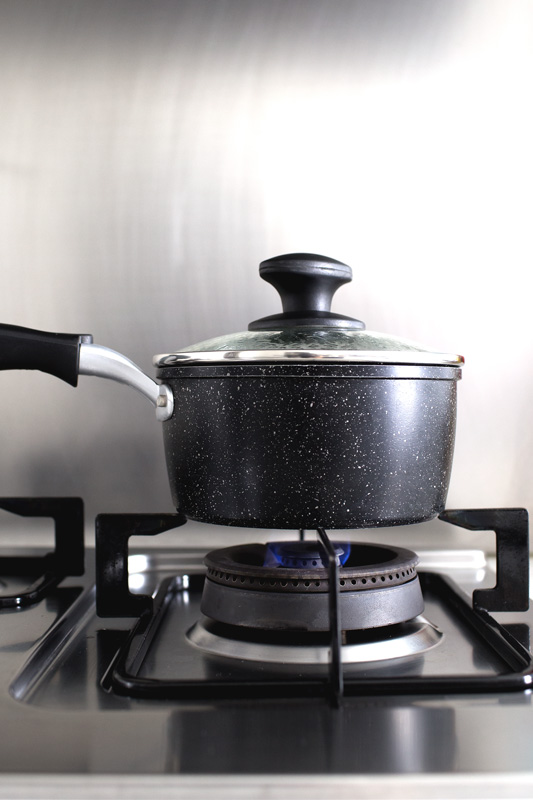 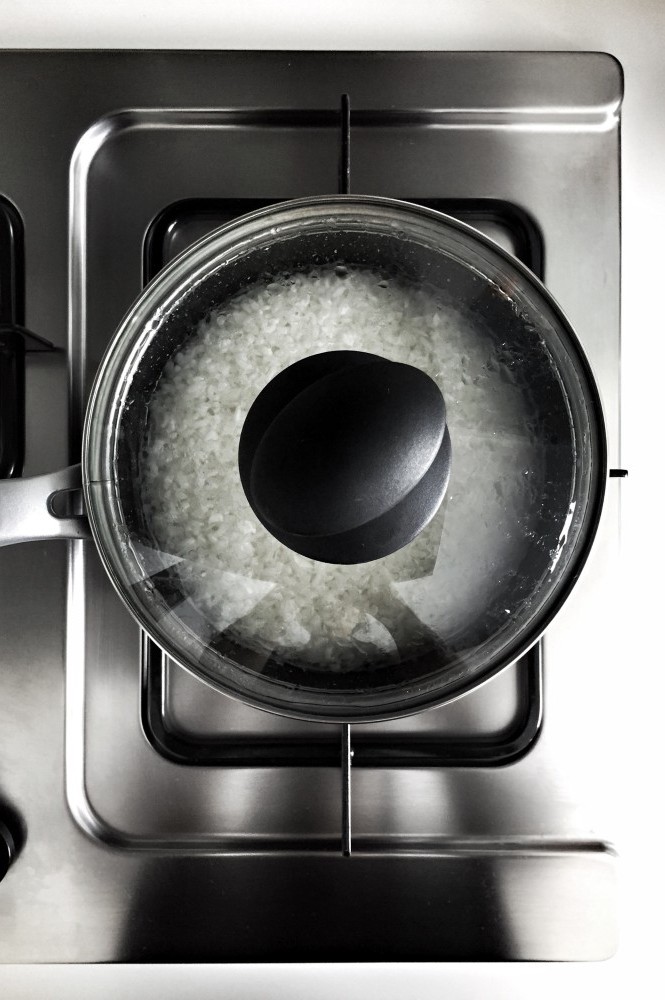 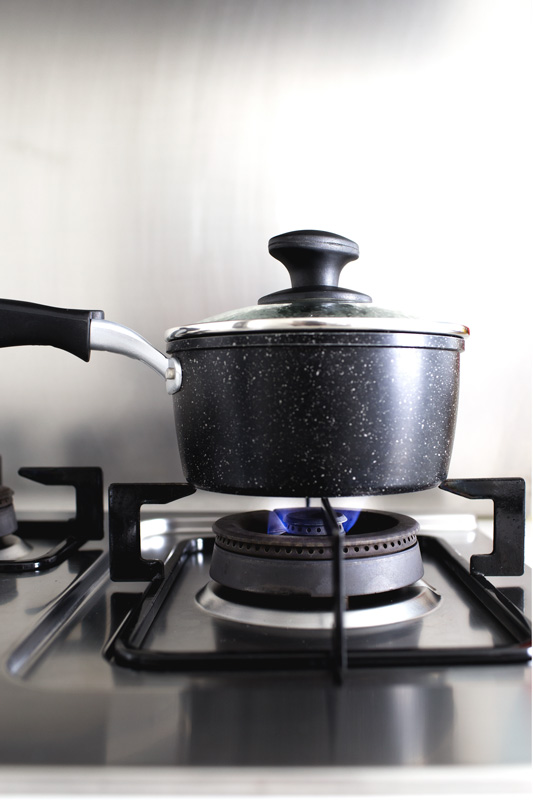 STEP 4: Now turn the heat off completely, and set the timer for another 5 min. This step completes the cooking-part of it. By the way, you should not, by any means, open the lid… or stir the rice… or so much so as talking/disturbing the rice at any point during the entire cooking process. You get me? Leave. It. Alone.

STEP 5: Finally, you can remove the lid, but careful not to drop the excess water on the lid into the rice. With wooden spoon or even wooden chopsticks, gently, and I mean gently, fold the rice from the bottom of the pot over the top (without crushing the grains), and repeat a couple more times until the rice is evenly “shuffled”. Anyone who’s familiar with rice-cookers knows to do this step, which redistribute the moisture throughout the rice for more even and better textures. You may notice a small nub of rice at the bottom-centre of the pot being slightly coloured (see the second photo below). Unfortunately this is inevitable with stove-top cooking. If you are using this rice for making sushi, remove the small nub, but if you’re eating it plain, then it doesn’t really bother anyone.

STEP 6: Now, the final maturing step. Put the lid back on and let sit for another 5 min. If you are worried about keeping the rice warm, midway through this step, you can blast the pot over medium heat for 20 seconds to re-warm the pot. Why do this? You can eat the rice after STEP 5 without any trouble of course, but the rice after this extra 5 min of stand-alone time will tastes bouncier, livelier, and will take on a gentle luminous glow. 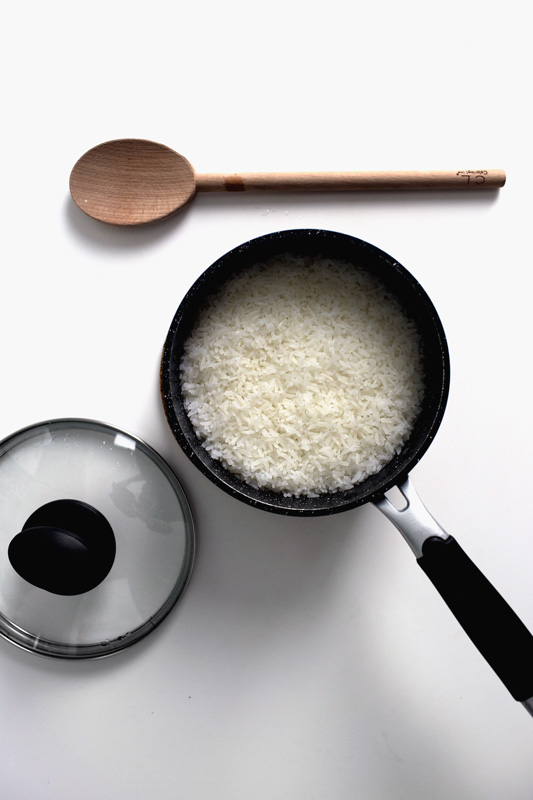 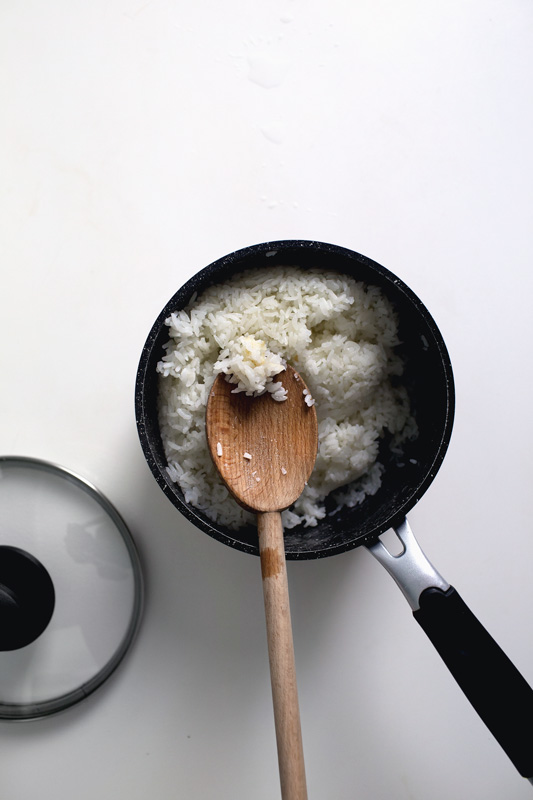 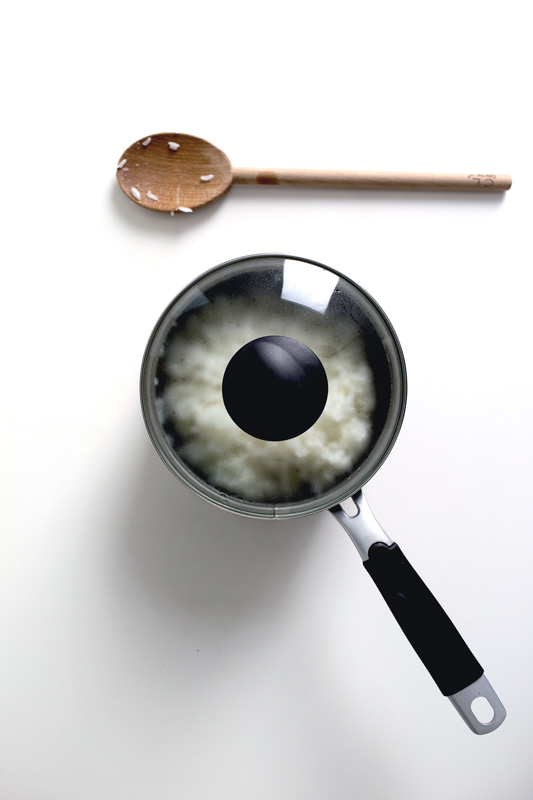 So there. Perfect, springy, glowy and delicious rice without a rice-cooker. Stop doing it wrong. Do it right. 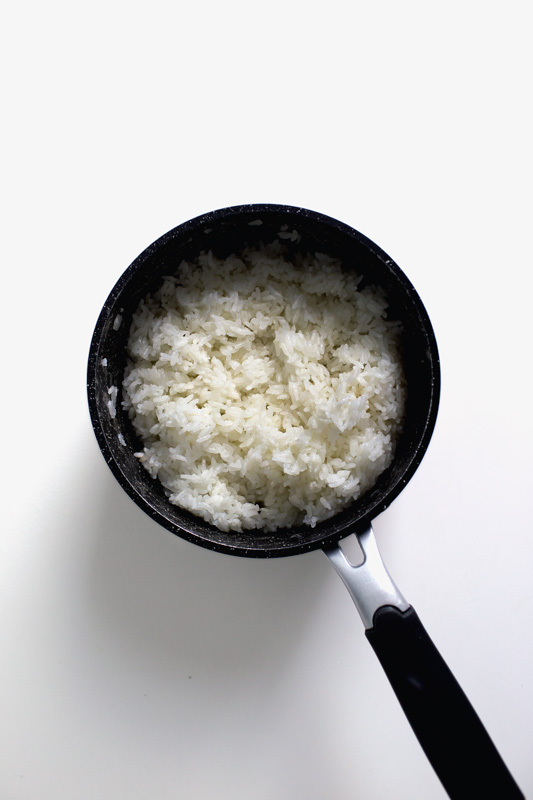 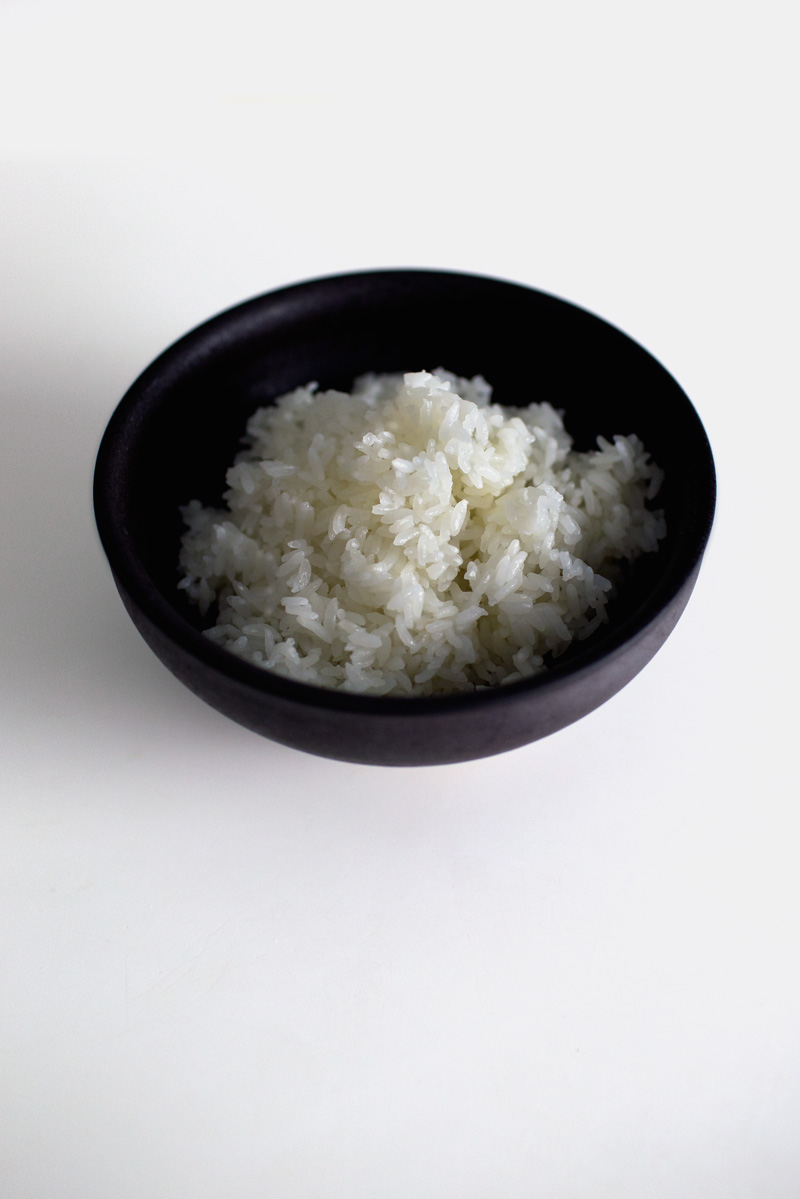