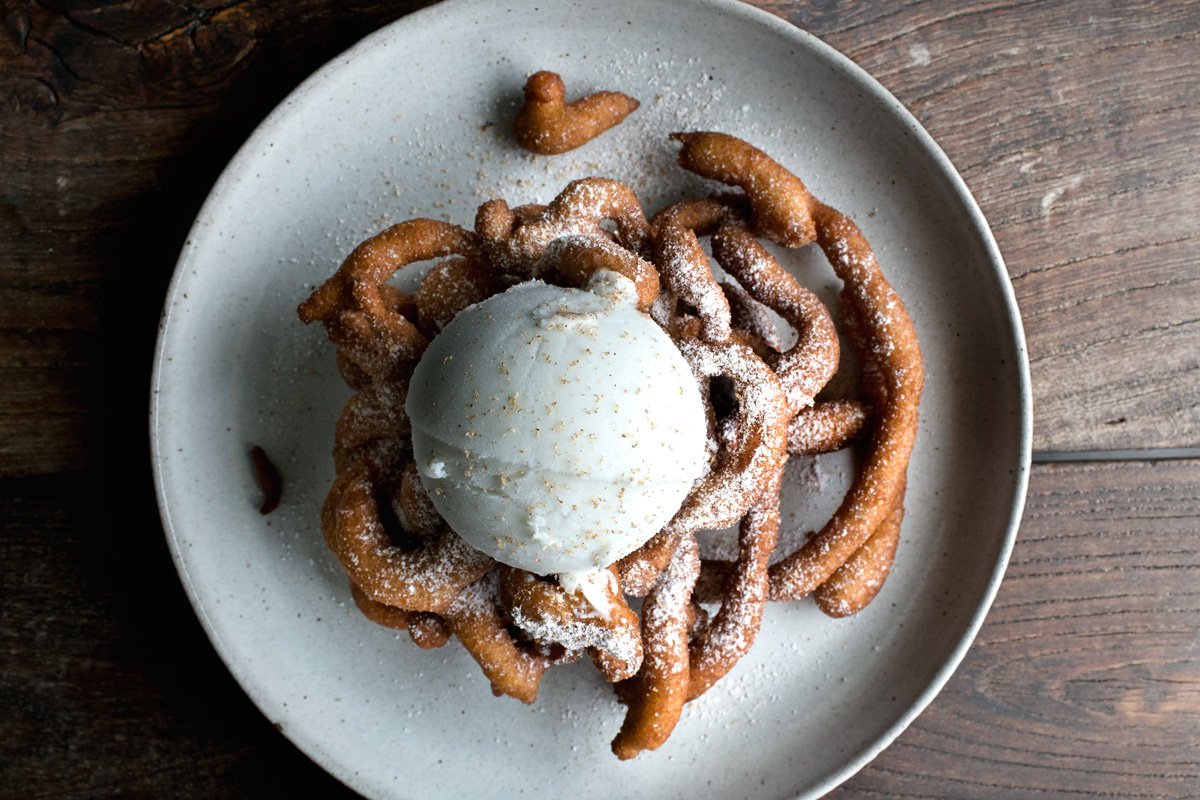 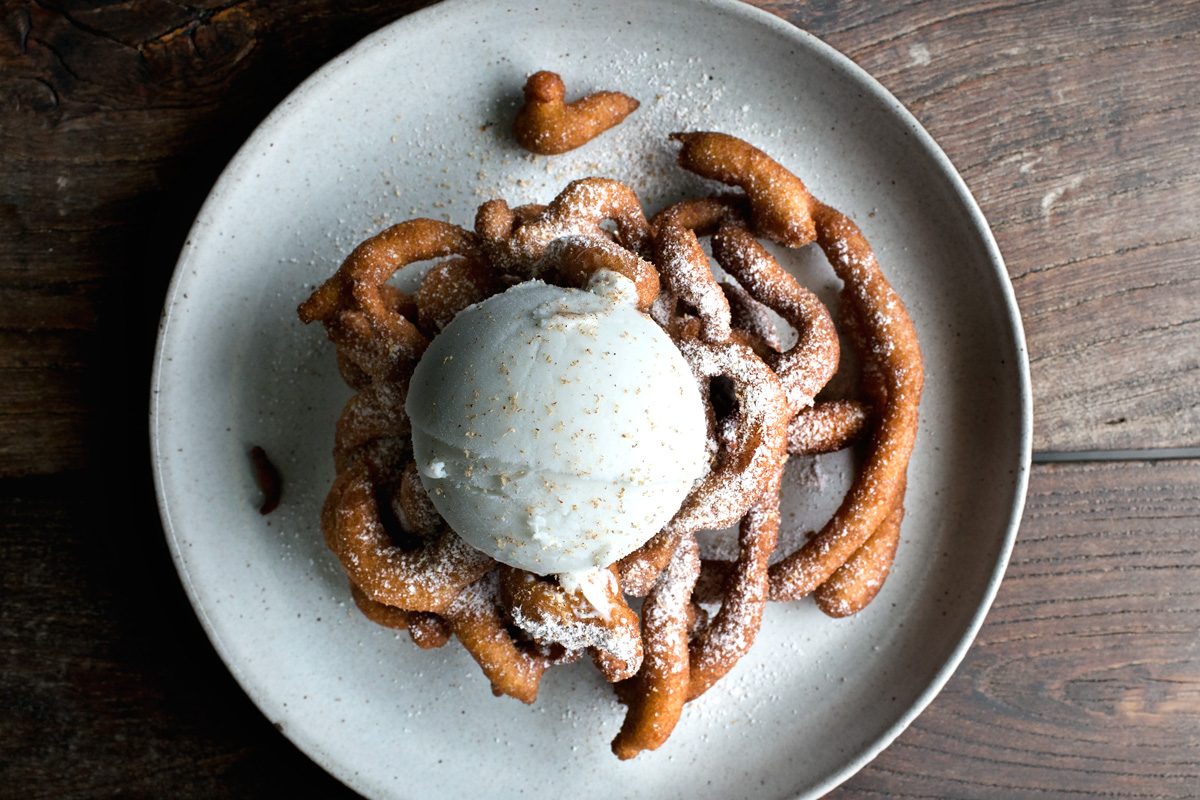 The yellow bowl, my recent favourite for everything, is from Dishes Only.

I STARED HATEFULLY INTO THE FUNNEL CAKE LADEN IN CINNAMON SUGAR AND MELTED CREAM, THEN REACHED OUT MY TENTACLES AND TOOK ANOTHER “ONE LAST BITE”

I think we’ve all been there.  There, every year in the first week of June, when the temperature abruptly severs from the safe briskness that was Spring, and ready or not, takes a sudden dive into the skin-binding, armpit-greasing humidity and heat that lays the red carpet for the bikini-season to come.  When we realize that it’s already too hot to cuddle with the safety of our long-sleeves and sweatpants, but when we look down upon the masses that used to hanged so discreetly underneath the winter-coats around our waists, thighs and oh-fuck-everywhere, we see the rings of humiliations, as if in an awkward smile, still hanging.  And for the epic beach vacation forever in planning and the sleeveless dress that’s been waiting since 2005, that it is once again, all too late.

That moment came, or shall I say, ambushed me last weekend while I was spending an otherwise lovely afternoon on the patio of our favourite hang-out, The Taco Bar.  As usual, after an epic feast, we sat there rounding up the finale on their fantastic funnel cake with vanilla ice cream, which came in an oversized Chinese porcelain bowl as big as the size of our winter delusions, and all of a sudden, the sky clouded up and a low thunder roared deeply in the air (I’m not shitting you).  Right then and there, in a time-freezing moment amidst the pre-summer warmth, as shocking and hollowing as any unanticipated bad news, I felt the tip of my multi-rimmed belly and the surface of my bulging thighs behind the veil of the thin fabrics, unexpectedly… touched.  Yes, touched I said.  There are you who would either laugh this off completely as science fiction, the normal people.  Or there are you who would nod profusely in empathy, most of whom have been through a pregnancy of some sorts.  But me?  I’m just the f-word.  In the awakening, I stared hatefully into the funnel cake laden in cinnamon sugar and melted cream, but instead of pushing it away, I reached out my tentacles and took another “one last bite”…

That.  That was the moment when I realized… I had to come up with a version that is at least 5% healthier. 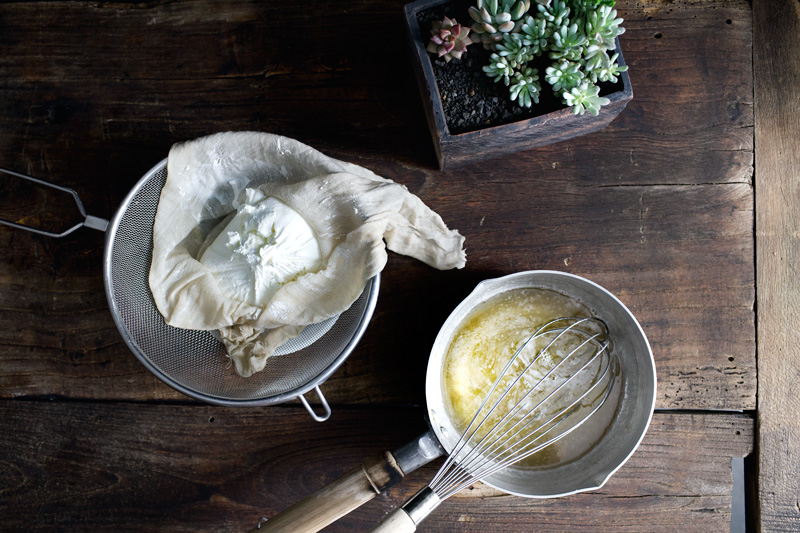 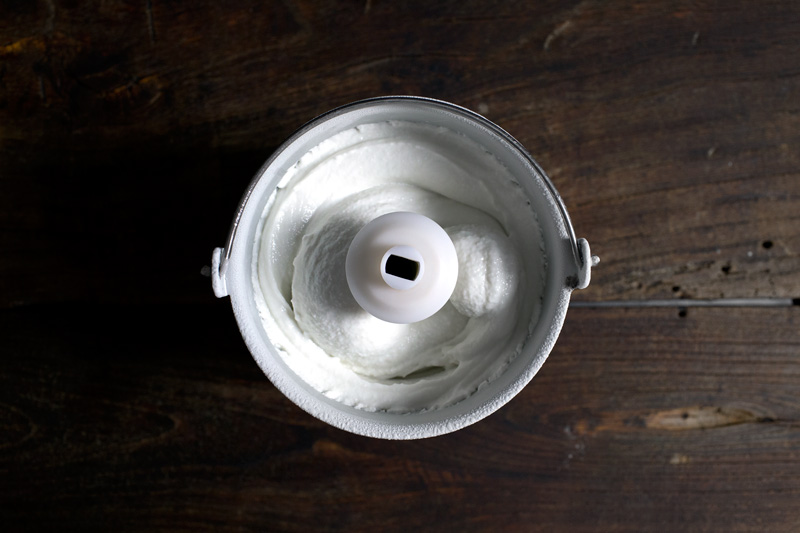 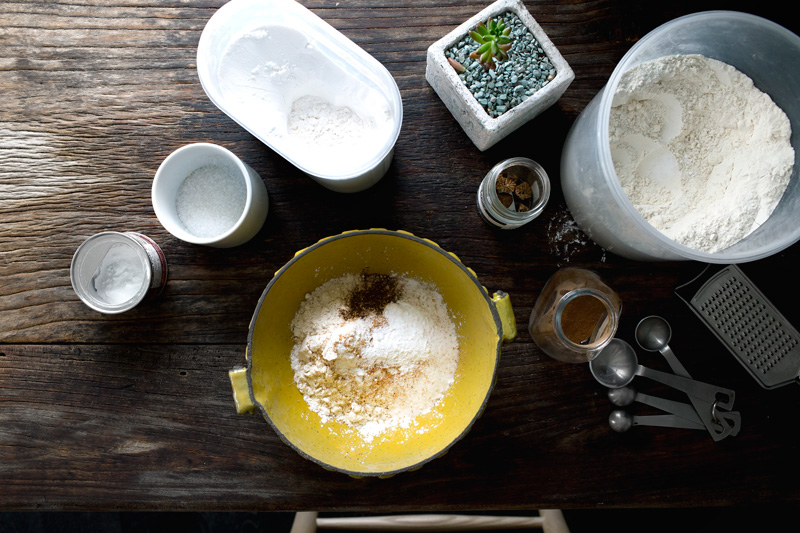 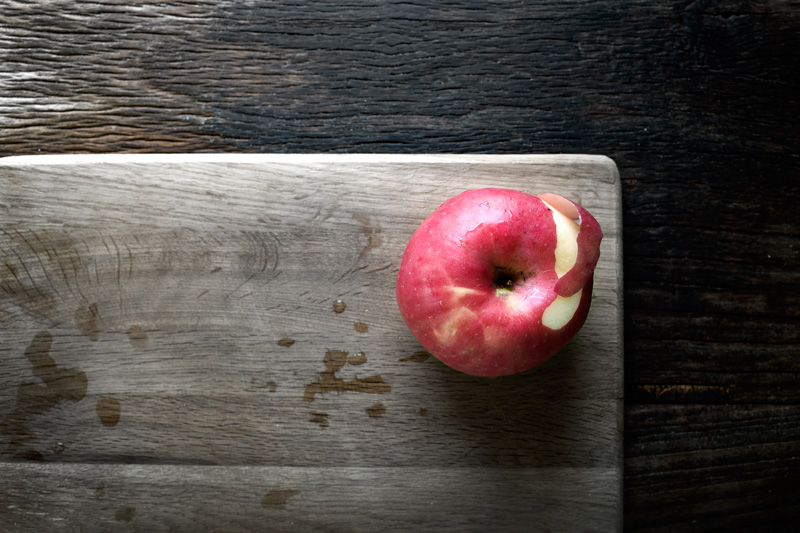 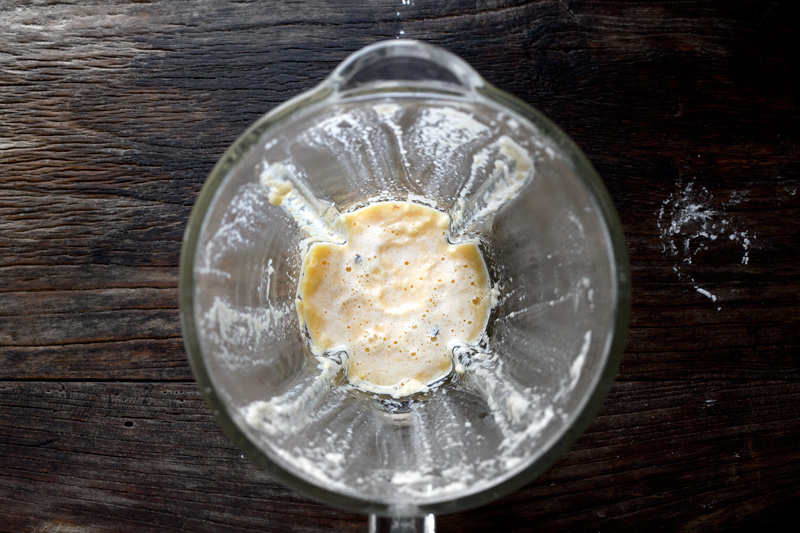 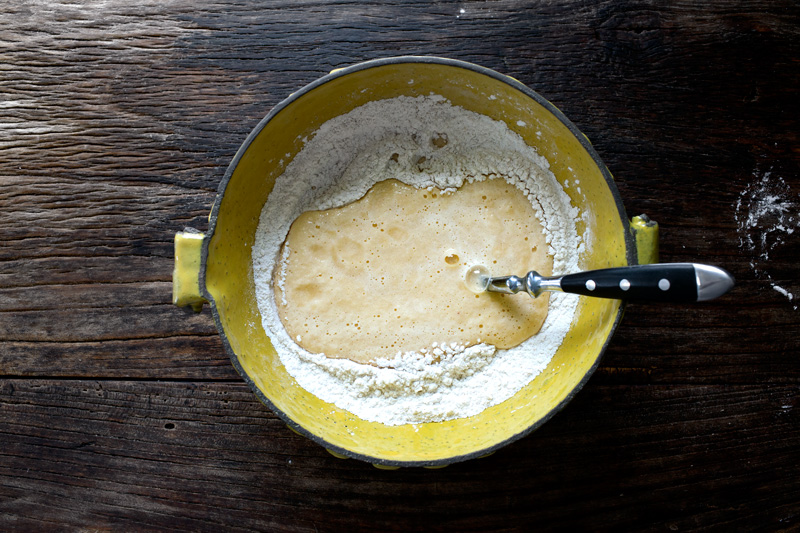 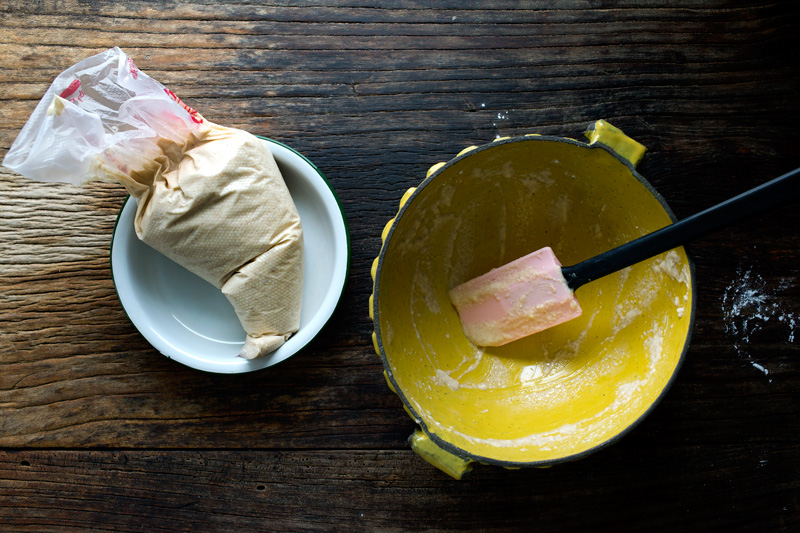 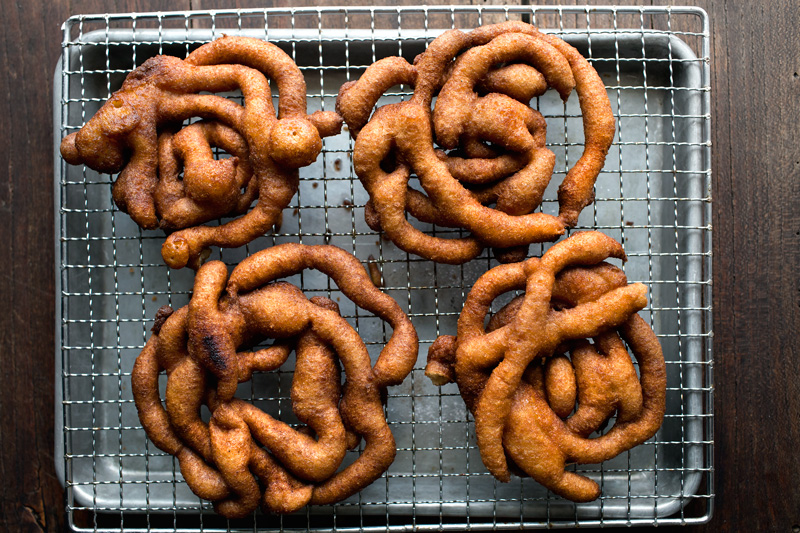 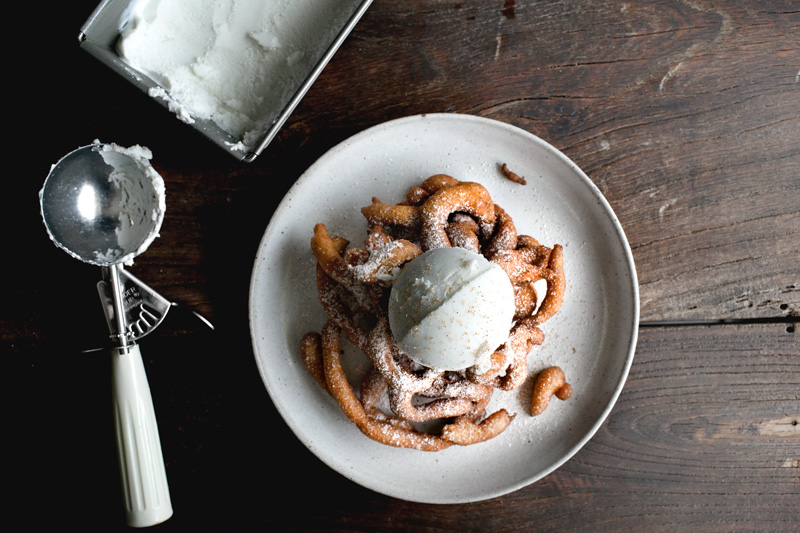 Now doubters, don’t write off this 5% as an insignificant joke.  The game of fitness after all, is but a battle of mind-over-body, no?  When your mind believes in full faith that it’s eating a healthier and infinitely more refreshing alternative, your body will be released from the spell of muffin-tops and forever reborn in fabulousness, right?  It’s really just science.  Here, let me show you.

An apple a day, keeps the doctor away.  The gospel truth of health-nuts, hello!  So what happens when you puree a whole apple with egg as the singular wet ingredient in this lightly sweetened funnel cake batter, then serve it with apple yogurt sorbet (yes, not ice cream, but sorbet!) made from blended Greek yogurt and apple-juice-simple-syrup?  The apple funnel cake is not-at-all greasy, evidently from the barely reduced hot oil after frying, but it’s wonderfully crispy all around the surfaces, and pillow-y soft as well as slightly chewy on the inside, almost resembling a yeasted donut thanks to the addition of tapioca flour.  Then instead of being smothered in creaminess, the apple yogurt sorbet brings a cold and crisp contrast to the warm cakes, that melts weightless and guilt-free into every bites.  What you get is a refreshing summer alternative that is light, tangy, and permeates the fragrance of apple juice so elegantly in the back note that you are almost convinced that it’s a daily serving of fruits and vegetables.

In fact, there is a whole apple plus yogurt disguised behind this sinful decadence here.  So I say, we better finish it all to finally mark the beginning of this year’s healthy eating-resolution.  Better late than never. 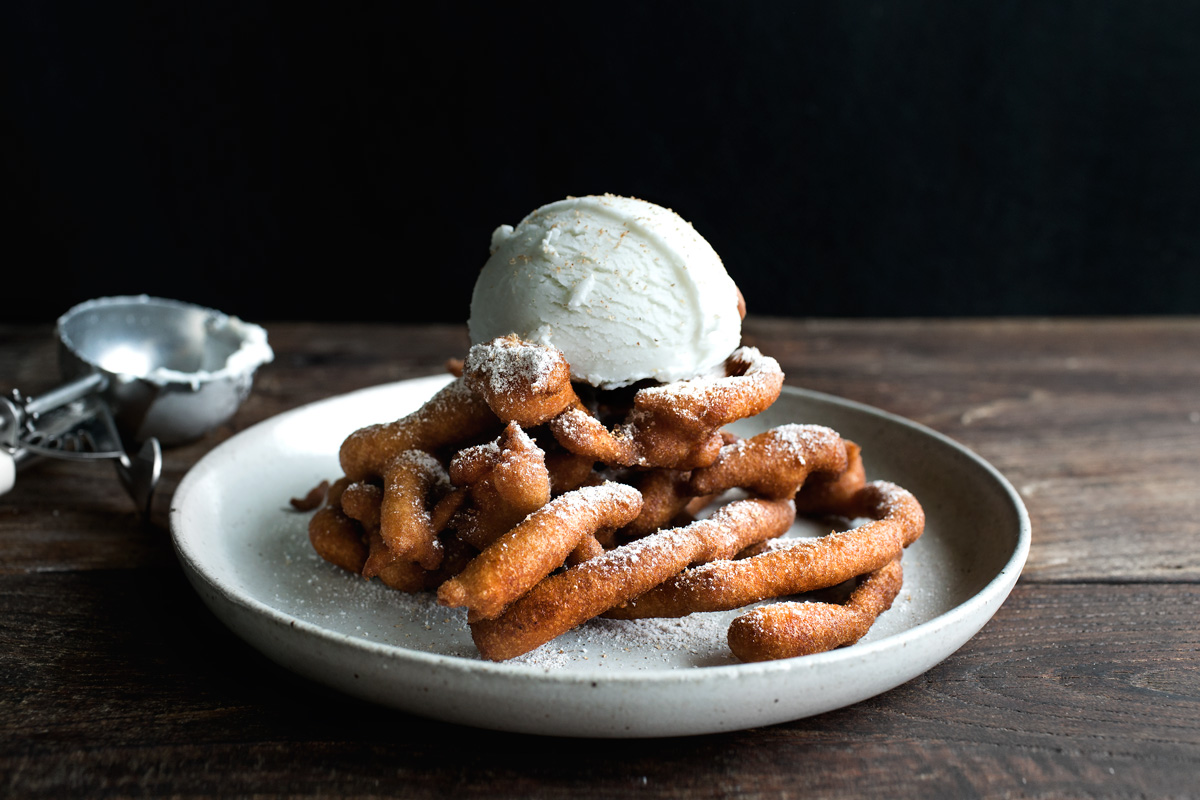 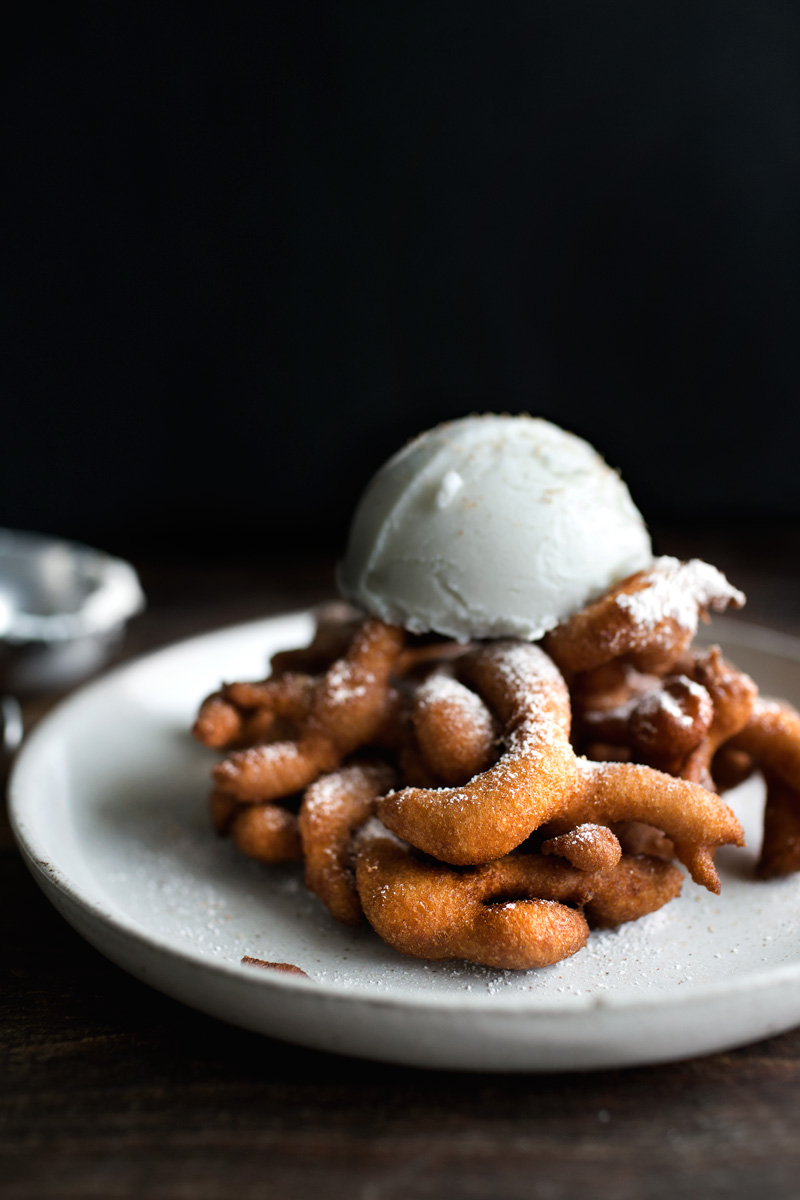 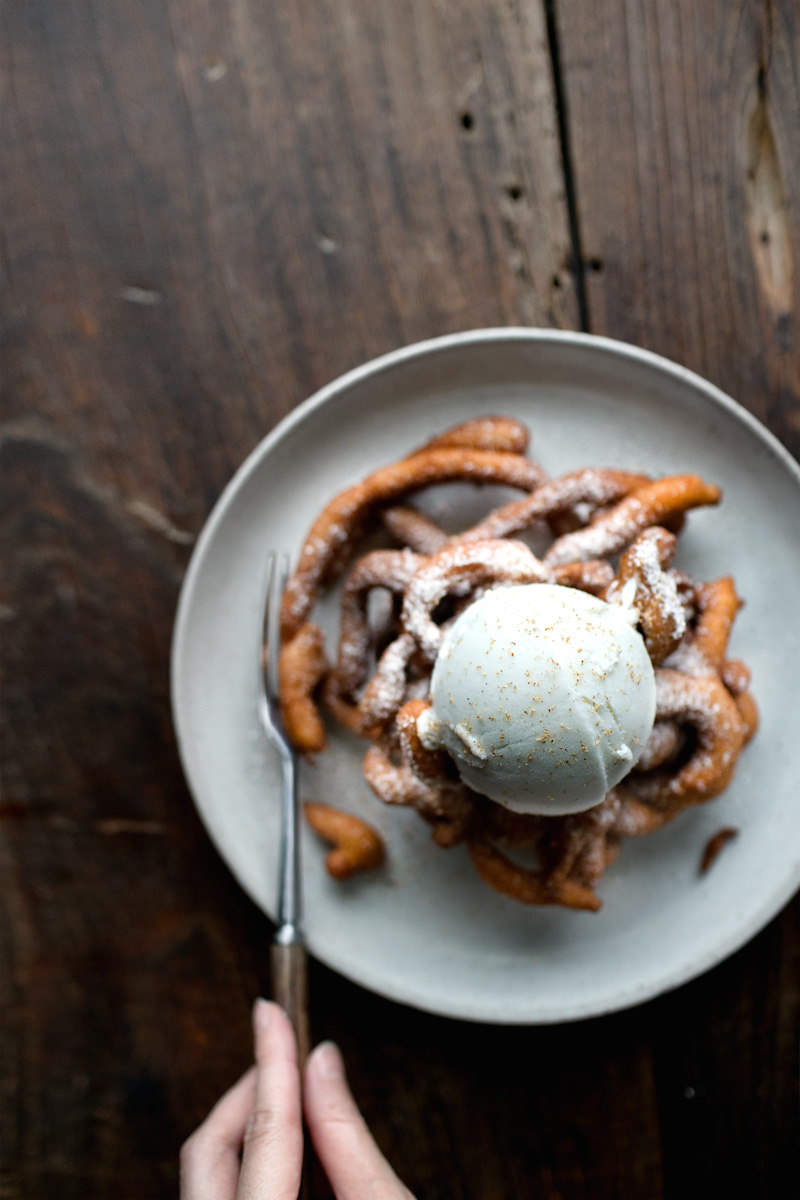 Choose a fragrant apple-variety such as fuji or granny smith for this recipe.  The apple flavour will not come through prominently in the funnel cake (whereas more from the apple yogurt sorbet), but just a faint profile in the background.  Even though I haven’t tried this, but you should be able to replace the fresh apple with about 1 scant cup of apple sauce (whisked together with egg) as the wet ingredient, which may give the funnel cake more apple-ness.  The tapioca flour, highly available nowadays, will give the funnel cake a slight chewiness that almost resembles a yeasted donut.  I would highly recommend trying it if it was an unfamiliar ingredient to you.  Then, even though this may anger Mr. Headley, the use of unflavoured gelatin in this adapted yogurt sorbet (which isn’t exactly high in fat nor sugar) will help eliminate ice-crystals, give the sorbet a nice firmness and slow the melting process during serving as well. 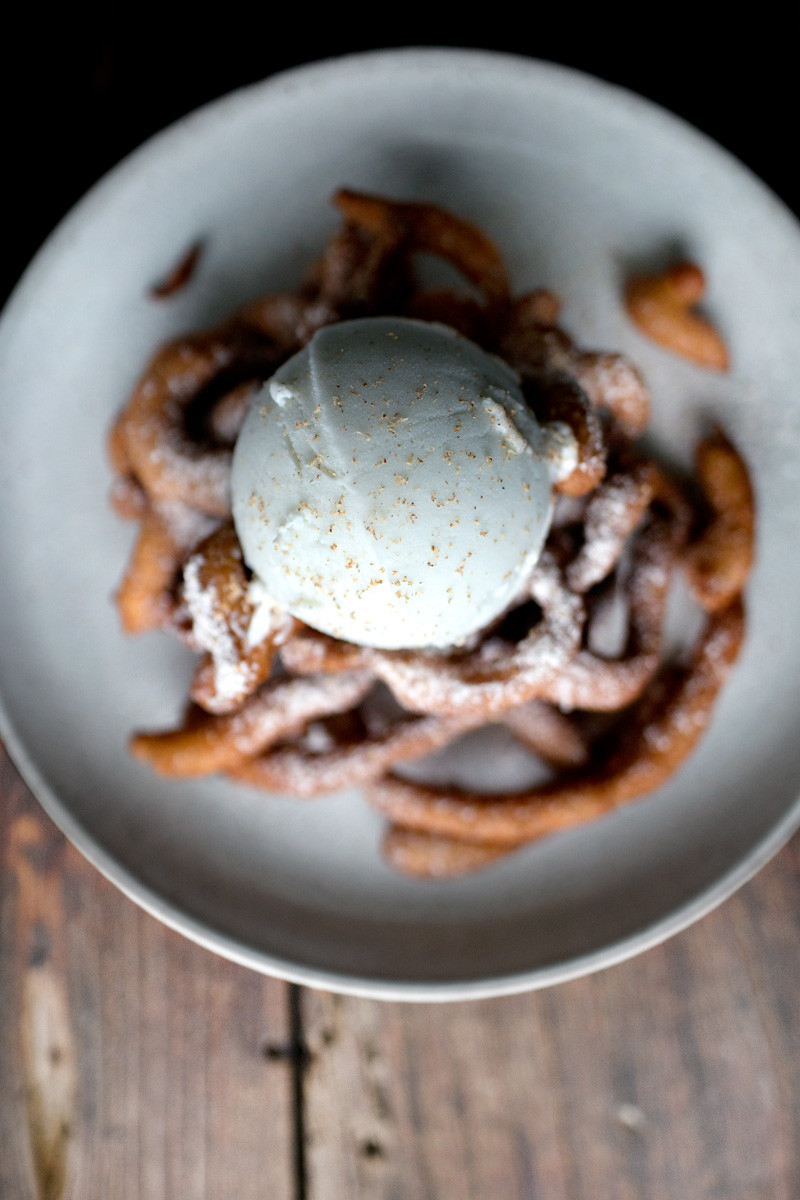 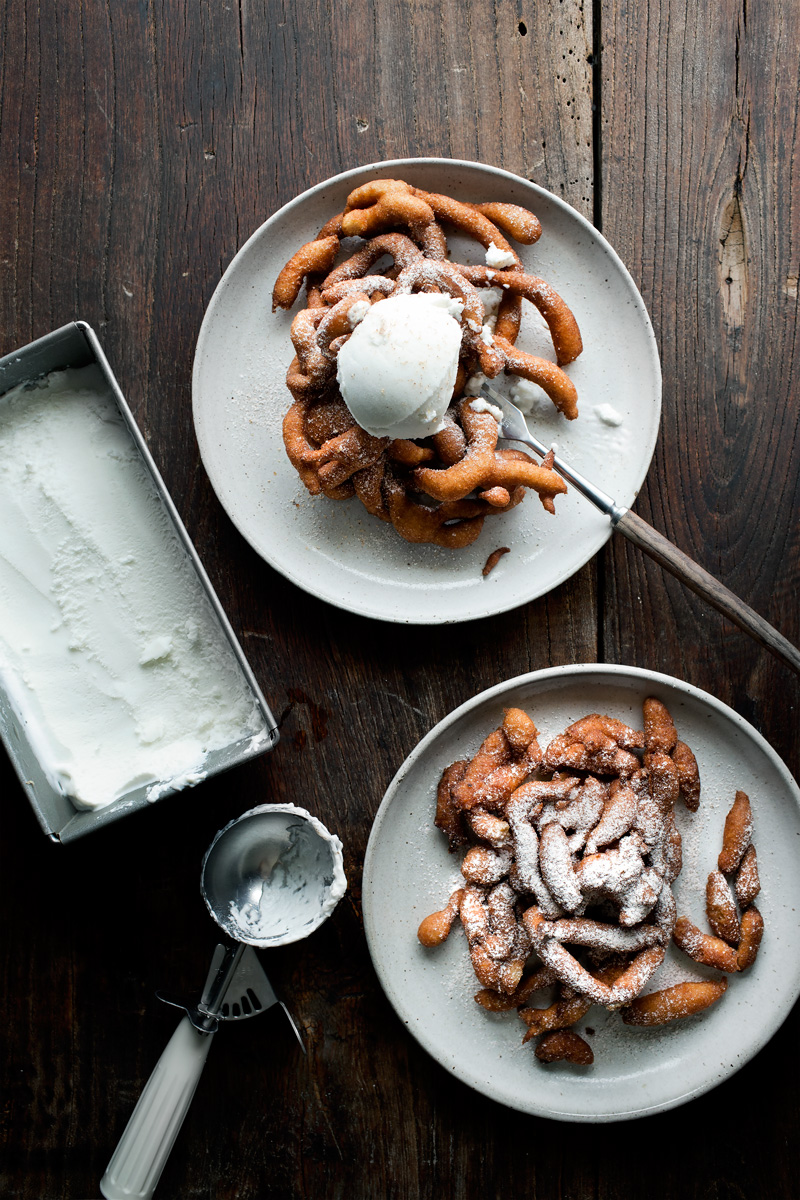