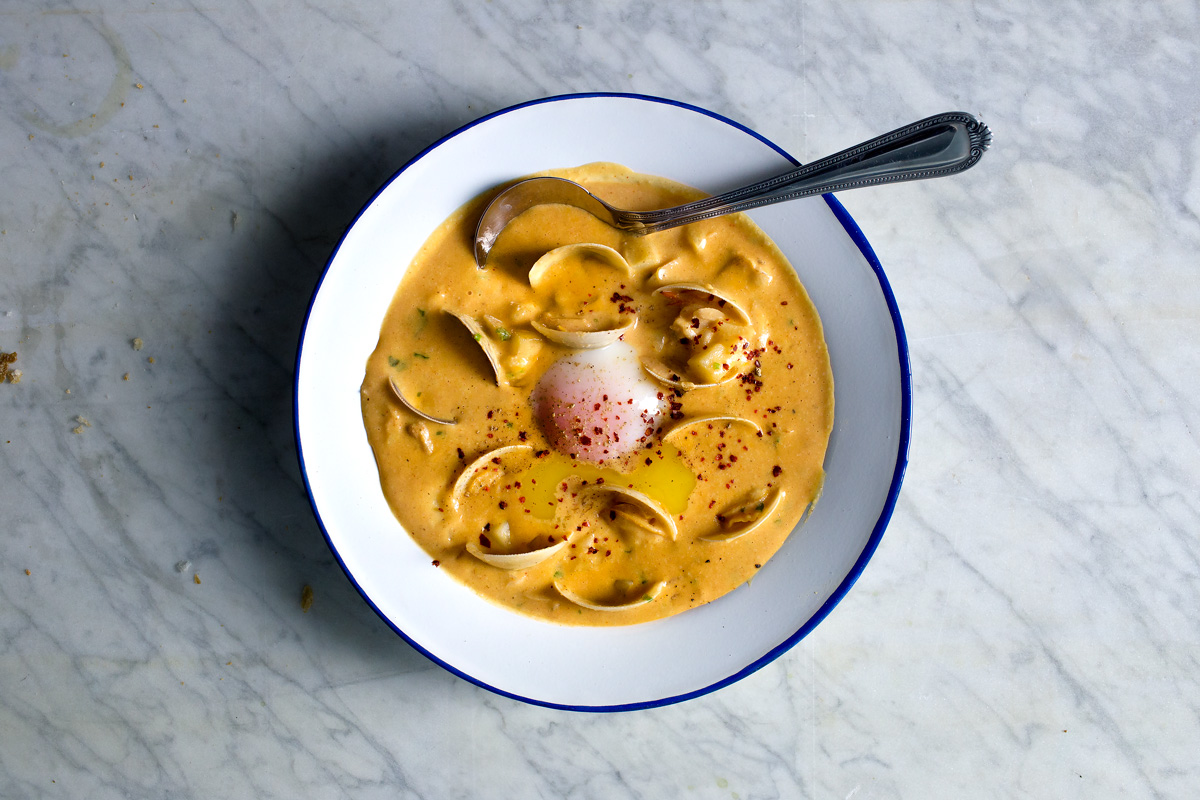 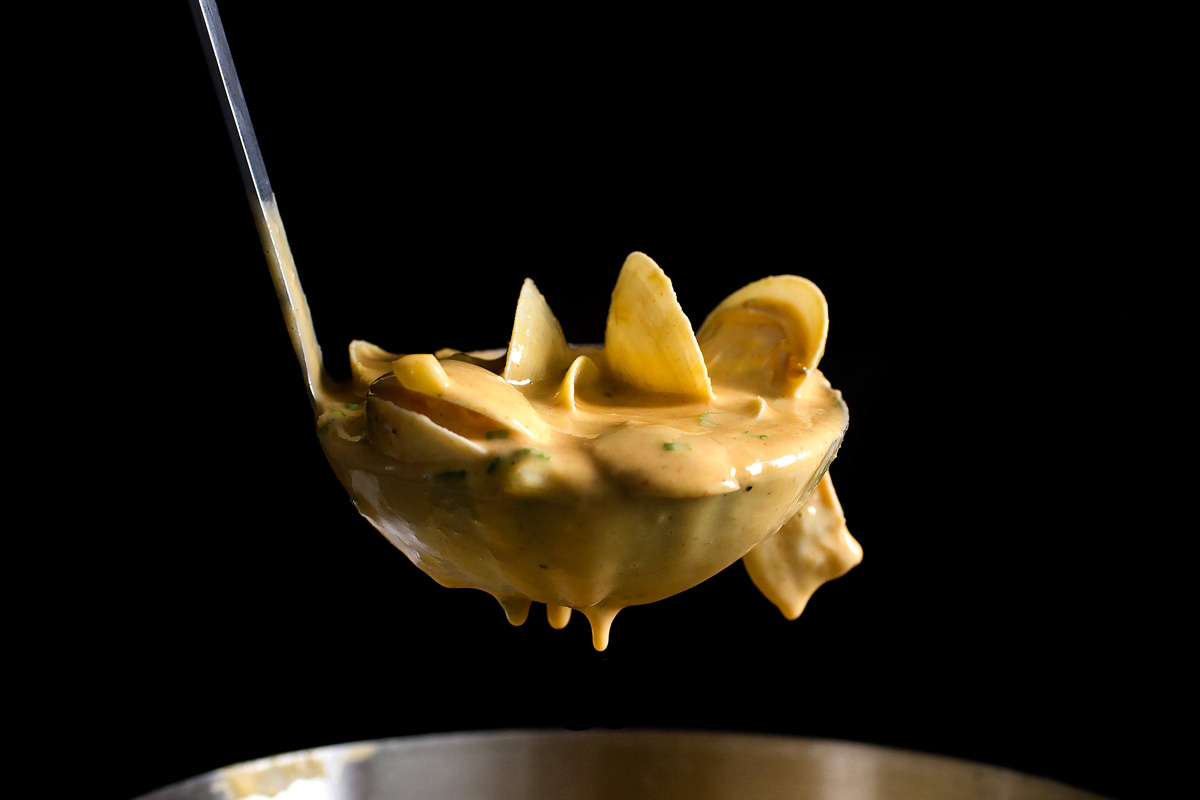 IF YOU’RE HOPING FOR A SLIMMED DOWN, DECENT AND POLITE CLAM CHOWDER TODAY, YOU ARE NOT GONNA FIND IT

We all have a food that we genuinely love so much, and at every long-awaited occasions when we put a bite in our mouth, we wonder to ourselves, why don’t we make that more often? Yes, well, that to me is grilled peanut butter sandwich. This… this, my friends, is not that. This is clam chowder, and it’s something else entirely some of the best clam chowder in san francisco.

I know exactly why I don’t make clam chowders more often. I know exactly the moment in time, the passage being said, the scarred memory in my head which still hurts, that all together forged a mental blockade in between me, myself, and my beloved clam chowders, for all these years. It was a particular spring day in New York, when I was just about to order my favourite “soup” from a popular bakery with a friend of mine:

“Do you wanna know why their clam chowder is so good?”
“No?”
“The other day, I saw them making it where they dunked an enormous brick of butter into the pot at the very end.”
“How enormous…?”
“Like big. Big. Like drinking butter.”

Head down, belly tucked, I walked away from that bakery without my clam chowder that day. In fact, if you can believe it, I sort of didn’t get my clam chowder for many years that followed… Like I said, it still hurts. But before you judge me, please keep in mind that this was in my 20’s when bikini-season was still very much a possibility, when dating was still a verb, not a noun. And most importantly, this was before I started this blog… 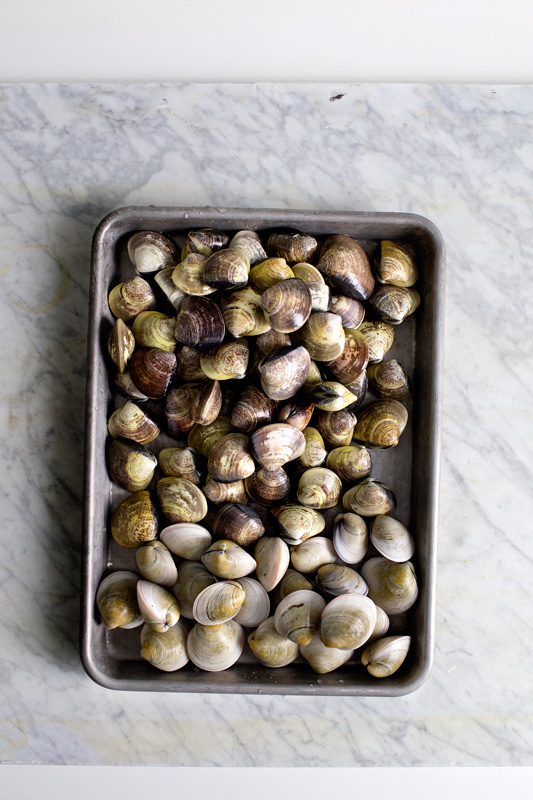 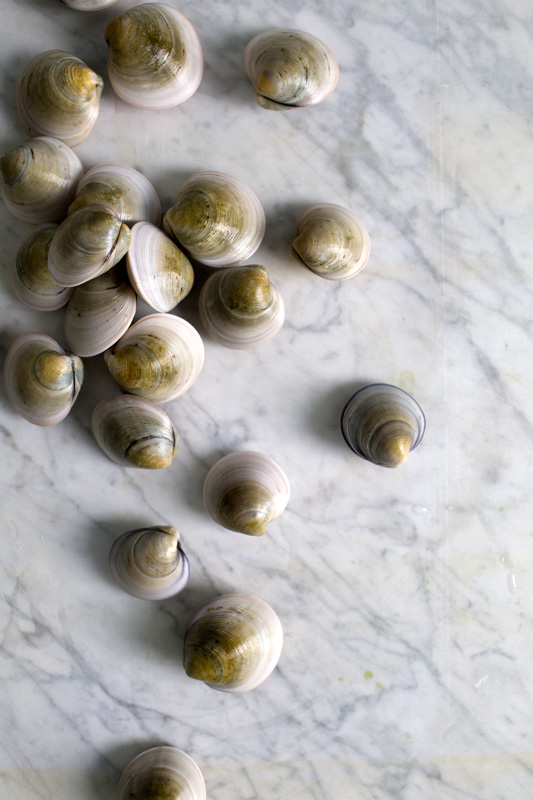 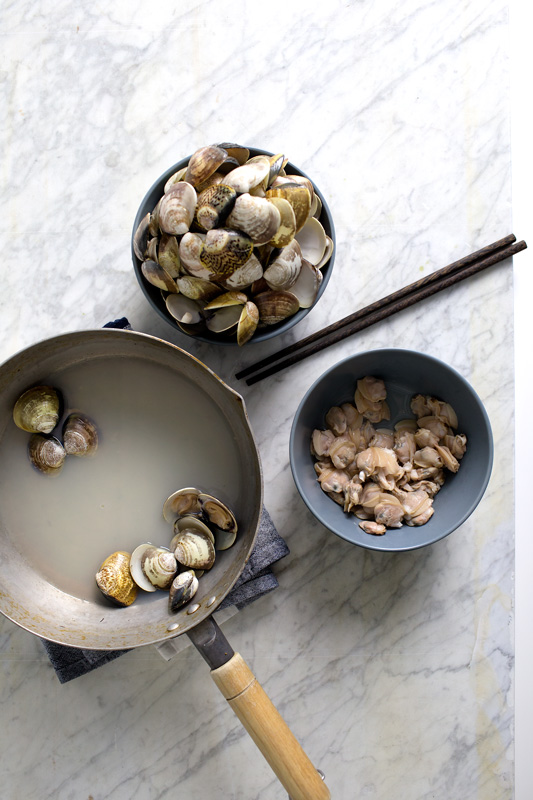 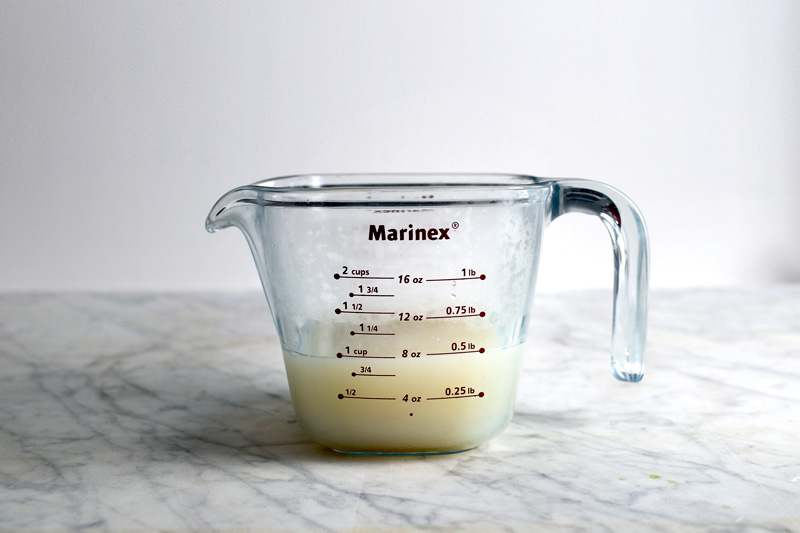 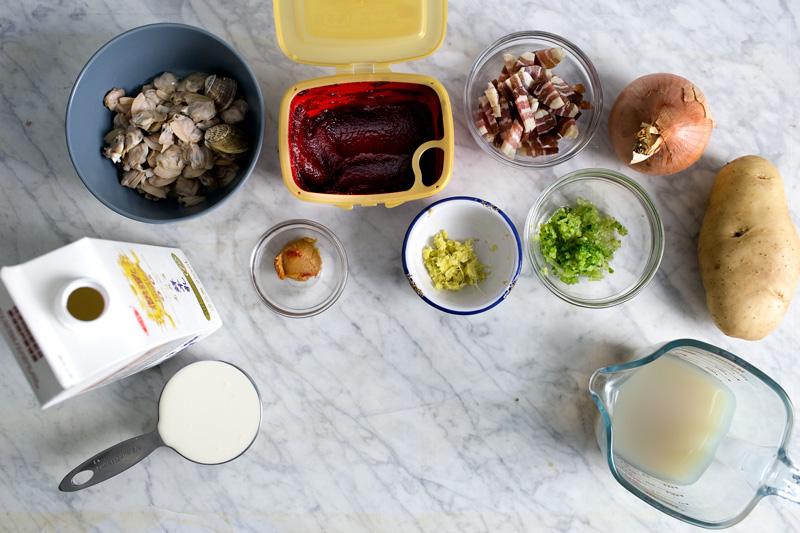 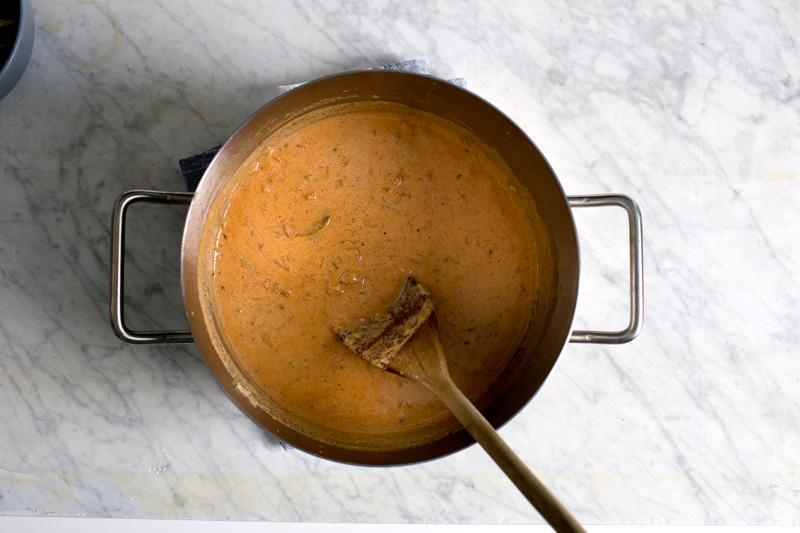 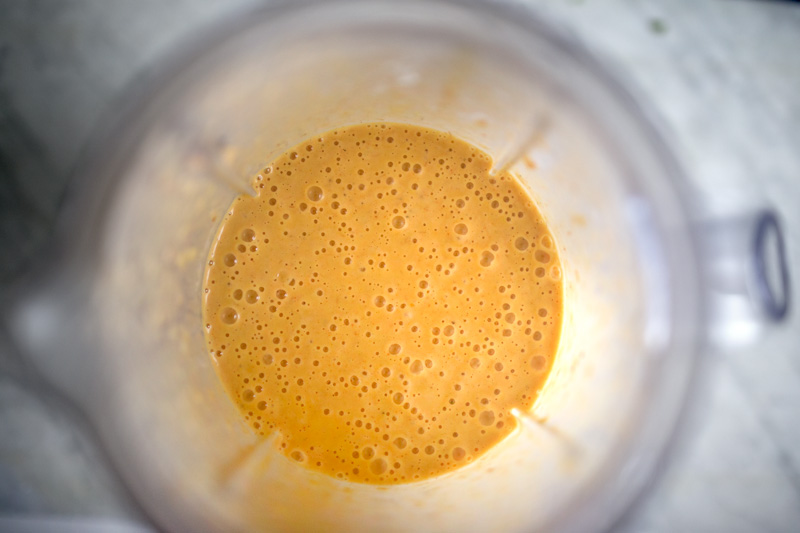 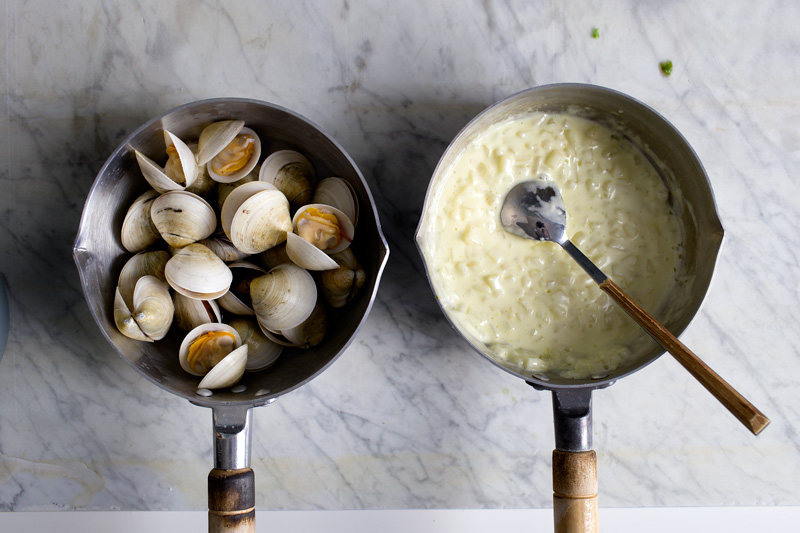 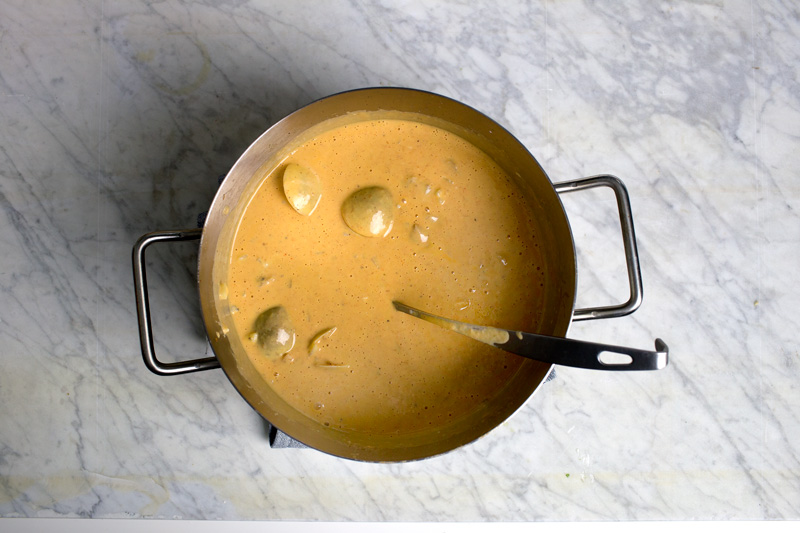 As you all can see, clearly, that this blog kind of made a joke out of my responsible self all those years back. I think after this cupcake and that nacho, and many other much wronger, more sinful and unforgiven abominations that went down this gut without judgement, I don’t stand on much ground when it comes to denouncing butter-drinking. Today, as a wiser and older woman with slower metabolism but cares even less, I realized I haven’t gotten the chance to look clam chowder in the eyes and say, sincerely, that “I’m sorry. I’m sorry I called you fat. And I’m gonna make it up to you“.

So if you’re hoping for a slimmed down, heart-friendly, decent and polite clam chowder today, you’re not gonna find it. This clam chowder will embody every little dirty and shameful habits a real clam chowder should be unapologetic for – the use of salty pork fat as a starting point, the rich and thick body made almost entirely of whole milk in addition to more cream, the soft and melty chunks of potatoes with big, meaty, unchopped bits of clams throughout. They are all here. But what makes it bigger and badder, is that it’s seasoned further with a small dollop of miso paste, and a huge dollop of Korean gochujang/chili paste. It’s spicy. It’s thick. There is a tender, sustaining heat (not just from the chili paste but from the importance of ground white pepper as well) that burns down with each spoonful of obscene creaminess and body, and it tastes salty, porky, and briny like the ocean on fire. To that, I’m just a small, sinking boat, helpless on reunited ecstasy.

And that butter? That innocent, wrongly accused butter that stood between me and my chowder all these years? Well, there it is, paraded and celebrated right on top of each serving, melting right into the swirl of the spoon and blend into the sickening goodness right before you eyes. OH right, and what’s running along side is the yolk bursting from a soft-baked sauna egg.

Because I owe it that much.

And you owe it to yourself not to go another day without it. 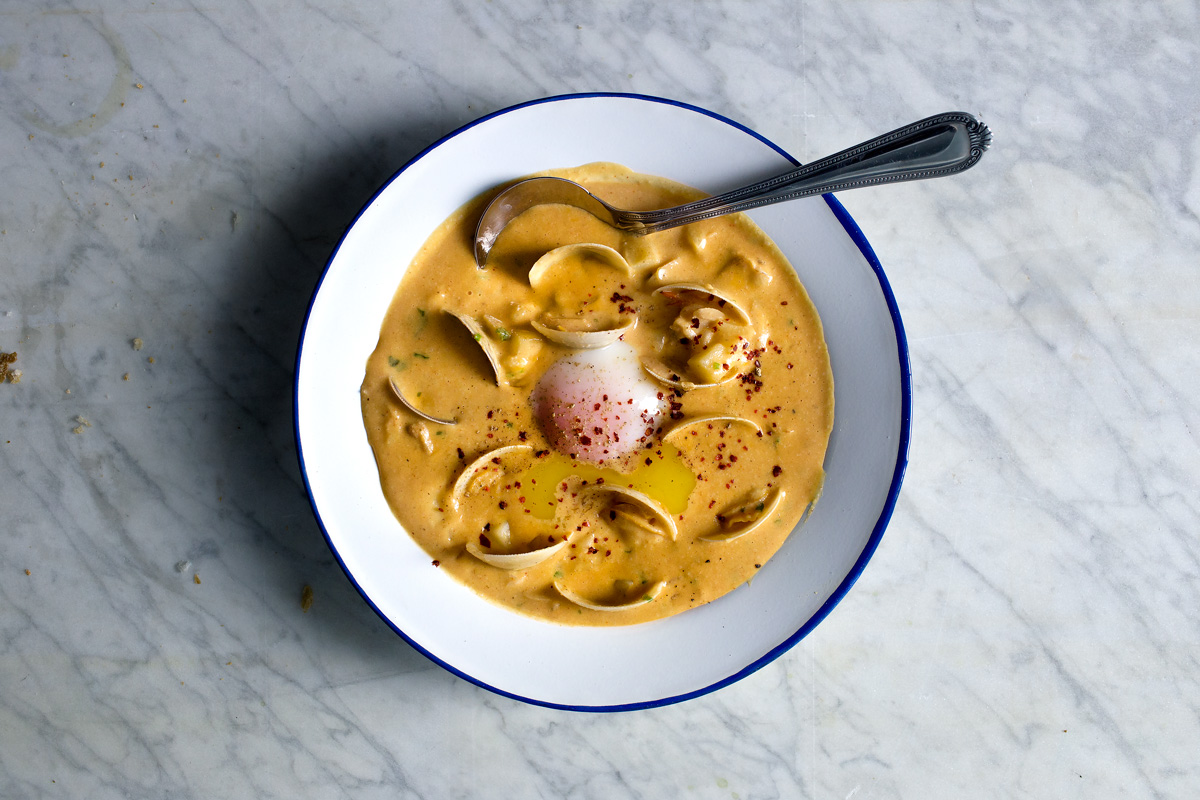 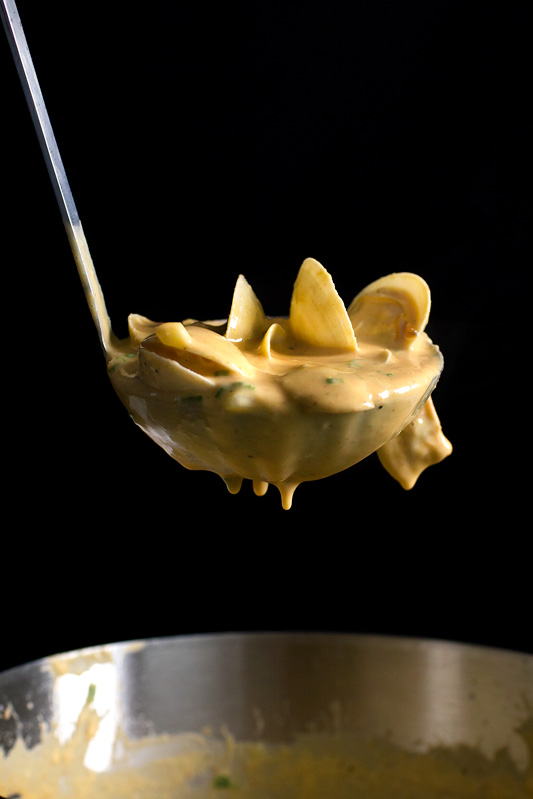 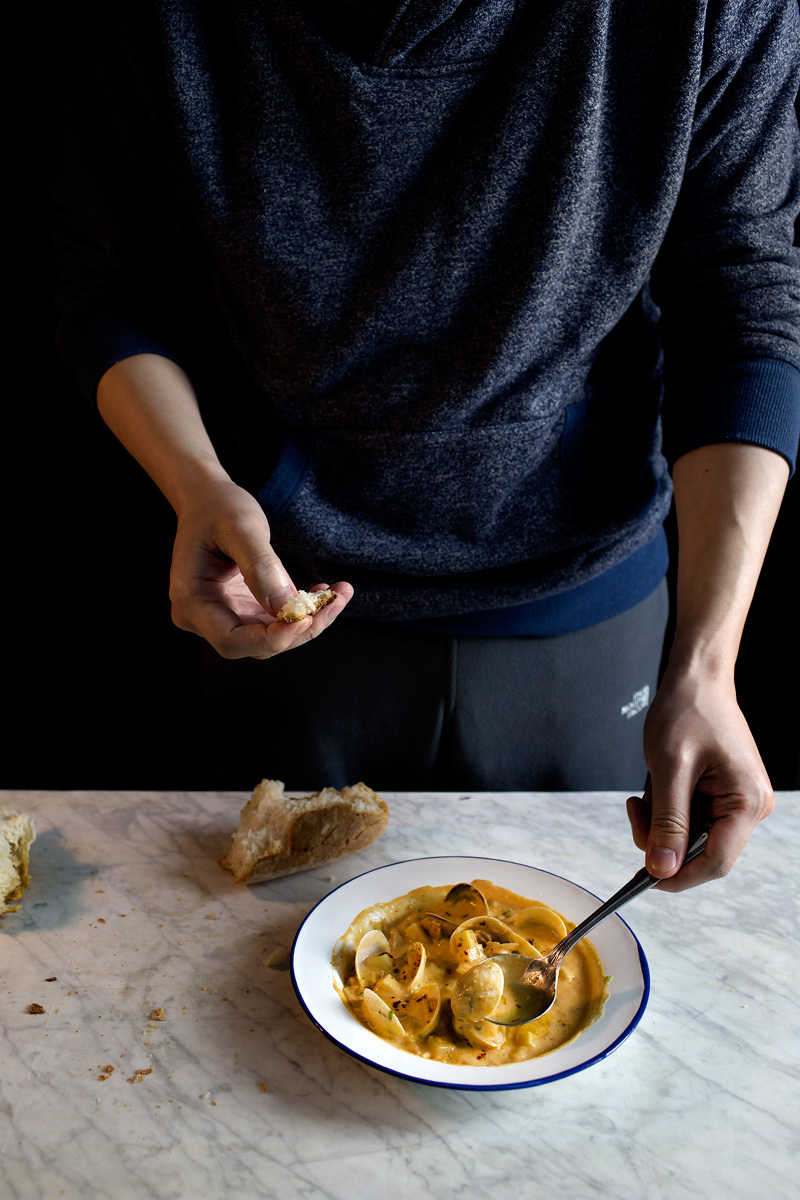 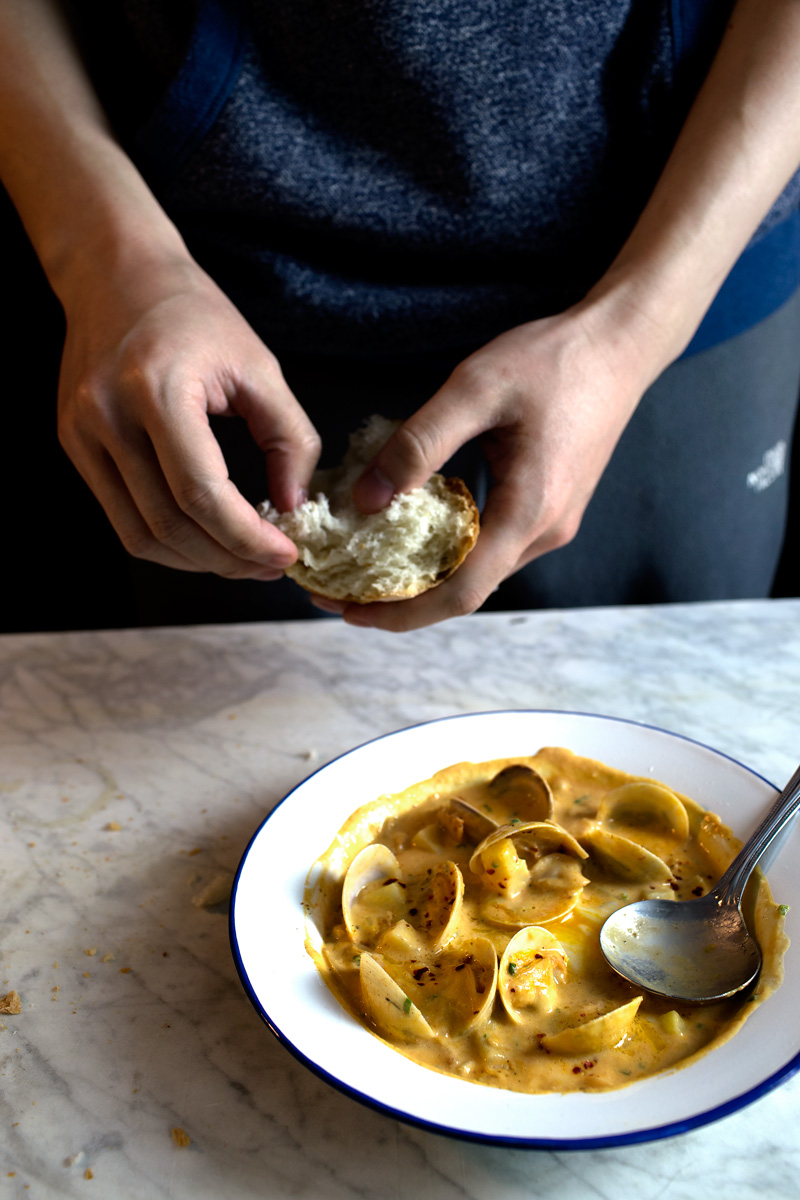 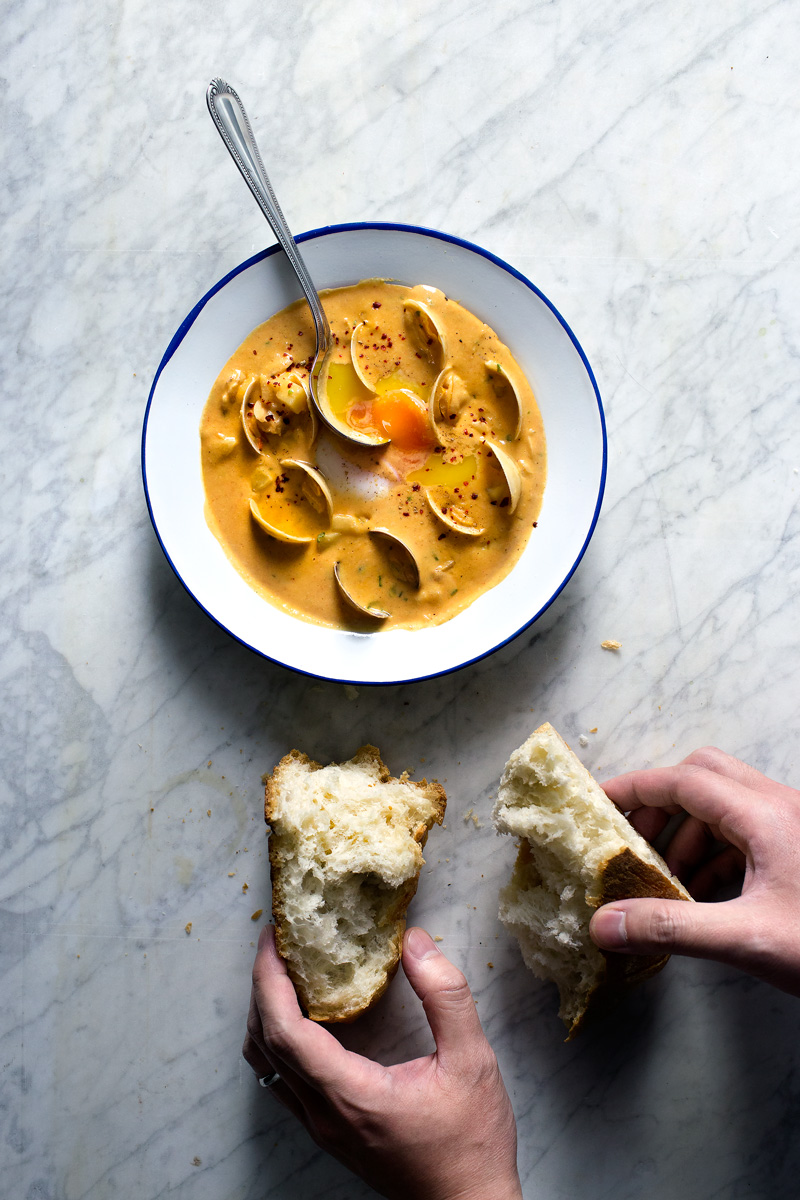 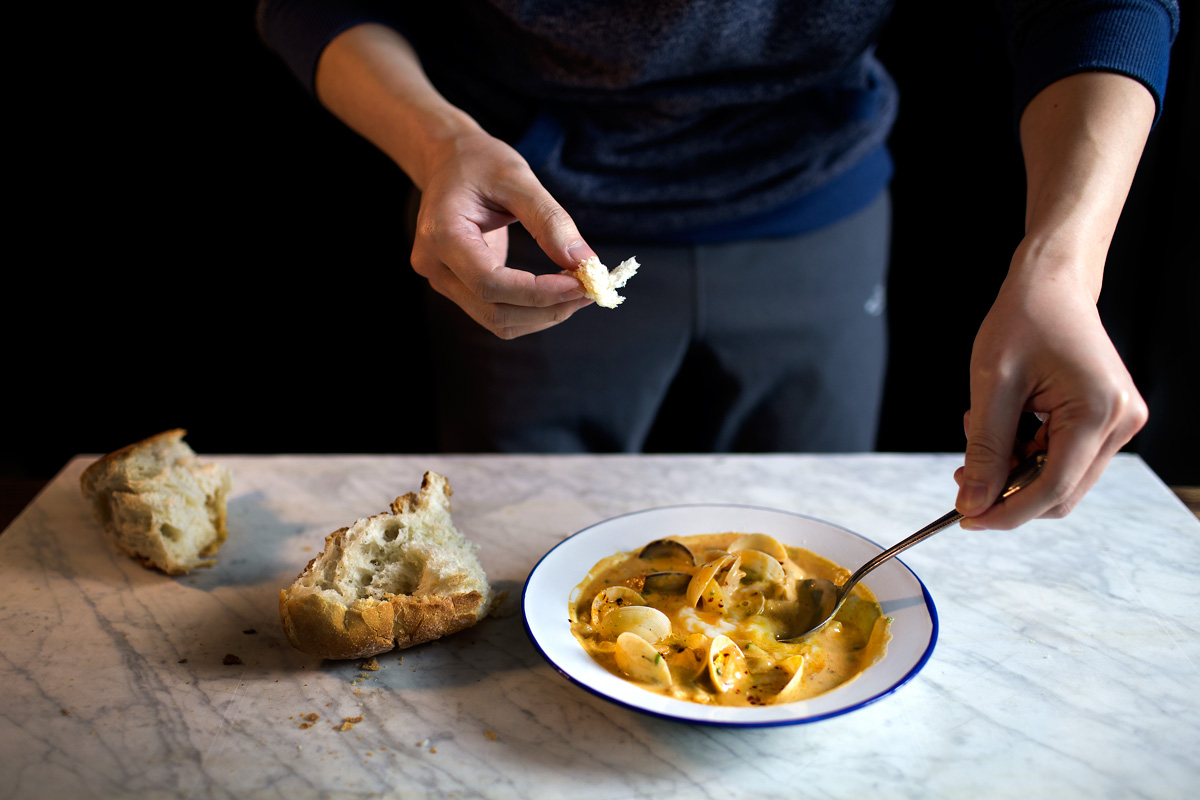 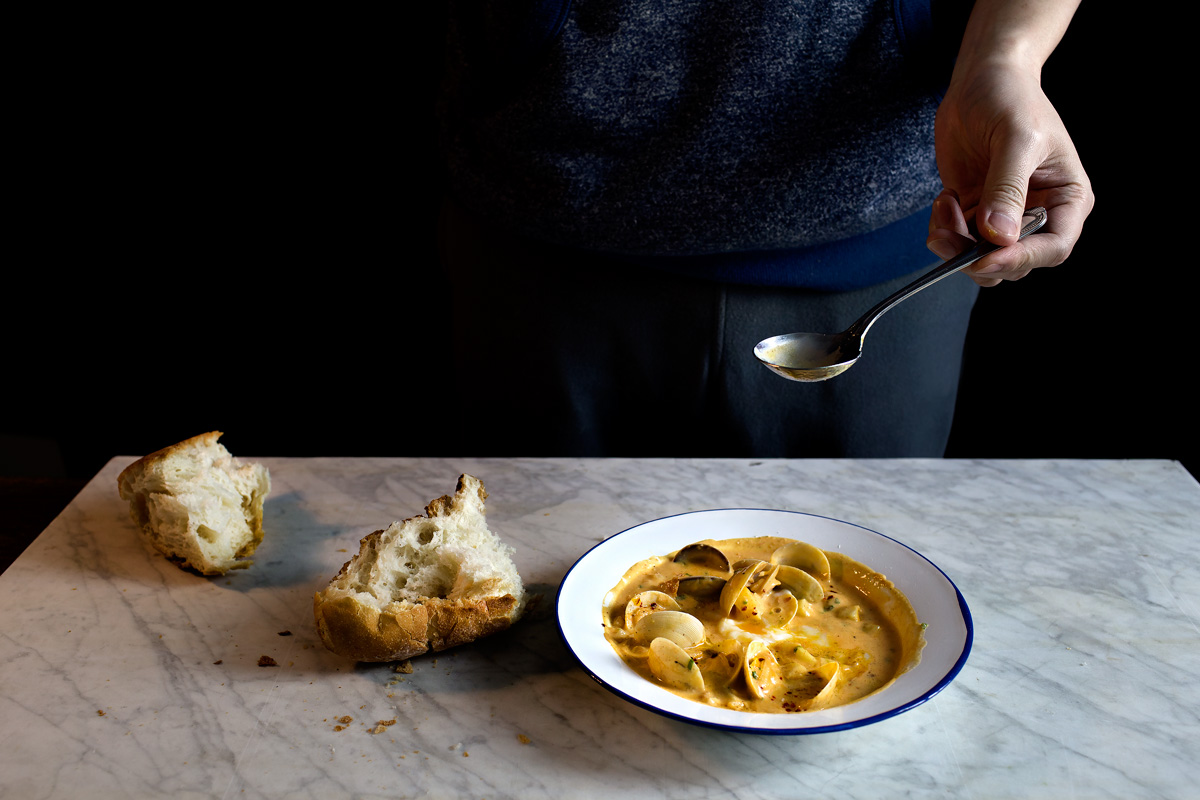