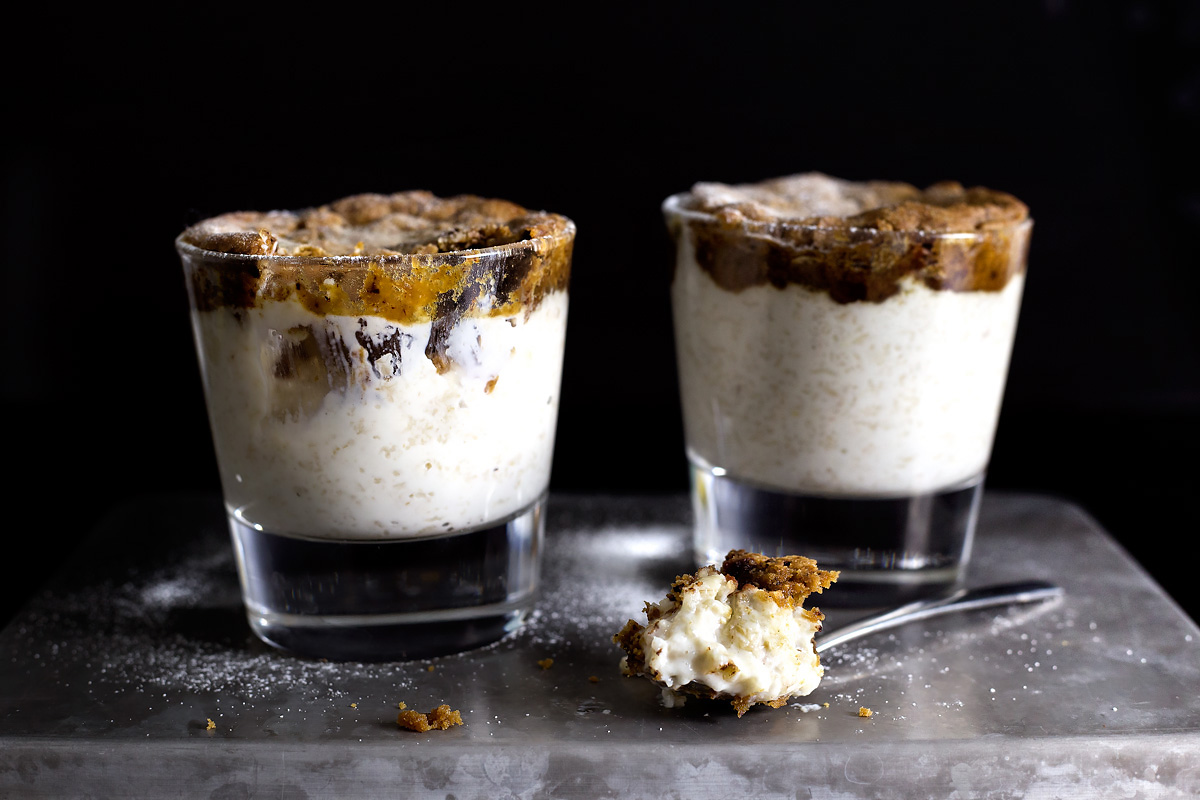 November 7, 2014 In All recipes, Bakery/Pastry, Sweets 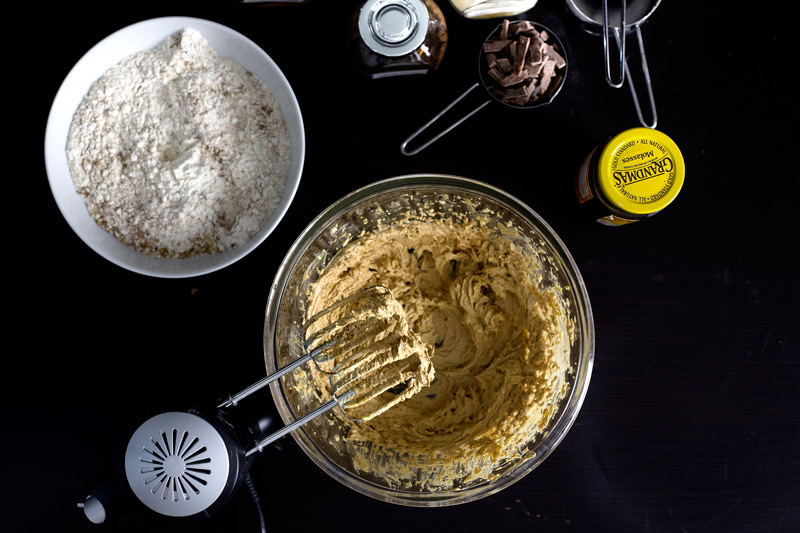 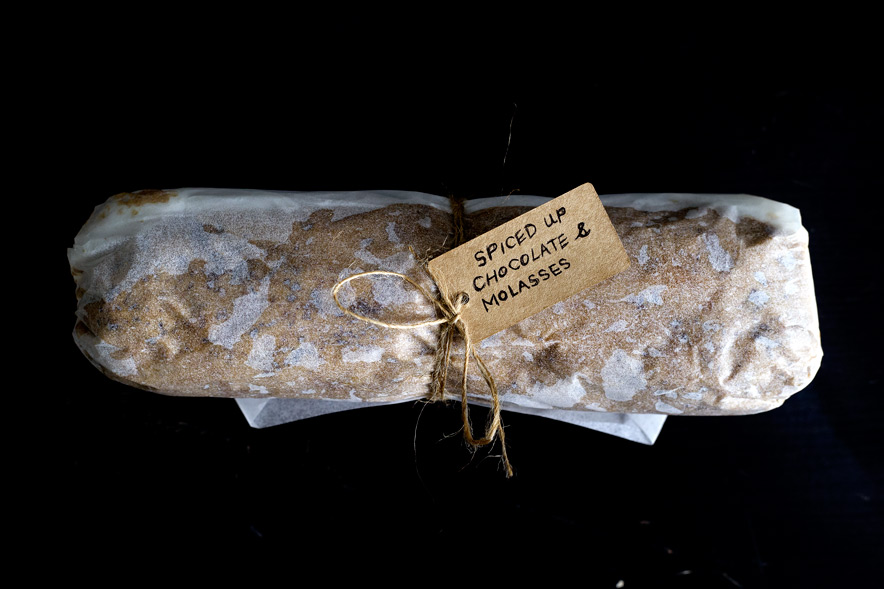 WE are all cursed with weird, nonsensical foods that we’re obsessed with eating, for absolutely no other explanations but the mere fact that… we ate them growing up.  They were often times the legacy of our great mothers who one day, out of desperation, whipped it out of a dirty kitchen sink and thought she shall repeat, for however long until the day we broke free for college.  Beware, that on top of the obliviousness that such “foods” were not nearly considered legit one step out the front-doors, 18 innocent years of unsuspectedly consuming the same weirdness, can grow into a powerful, lifelong brainwasher.  Mommy-to-be should take note.

I have, about a mile-long-list of such things.  A list that should worth a new segment called, The Stuff I Eat When I’m By Myself (stay tuned).  And rest assured, it ain’t pretty.  But Jason, on the other hand, has but one, one single childhood nonsensical food-fetish that has long menaced his reasonable adult-life.  And that is, a congealed tub of dead-cold… stiffened cadaver of something, that once in its previous life, was perhaps a barely sweet, borderline-edible plain oatmeal.  Yes, laid bare… it’s gotta be cold.  It’s gotta be stiff.  It’s gotta… make no fucking sense.  Yuuum?… well to him it certainly is.  He could eat a whole tub of that shit…

So by my  caring nature, I thought, for the second instalment of the shortbread-marathon I’m preparing for Food52, that this presents a perfect opportunity to redirect his relationship with dead oatmeals, into a more… socially acceptable scenario.  But first, speaking of shortbread cookie-doughs, I should point out how utterly amazed I was at how straightforward, fuss-free, versatile and most of all, failsafe they are – and for the same exact reasons, under-appreciated.  No confusing science behind baking powder/soda, nor is there any factors left to chances, I mean there’s none but one rule, just one simple rule to ensure you that at the end of a short amount of time, something crumbly and exceedingly buttery shall parade triumphantly out of your oven.  The rule being, a stern ratio between 2 parts solid fat (often butter) and 3 parts dry ingredients (could be a combination of various flours), by weight. 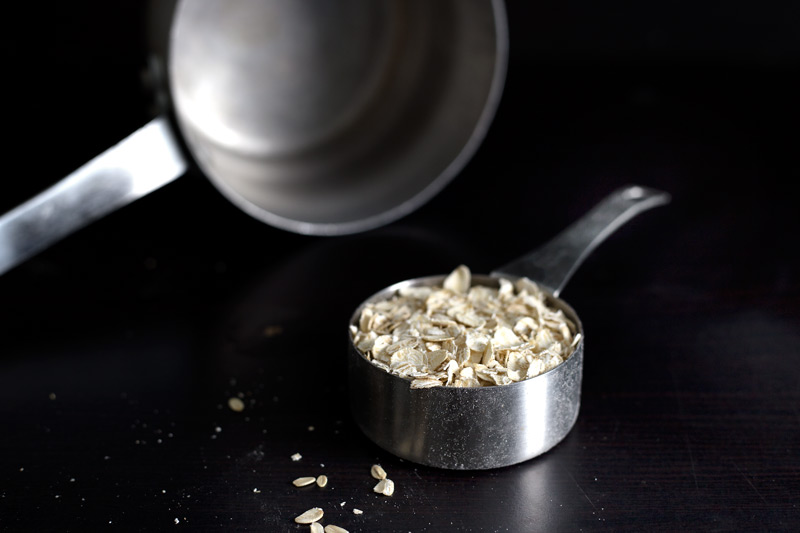 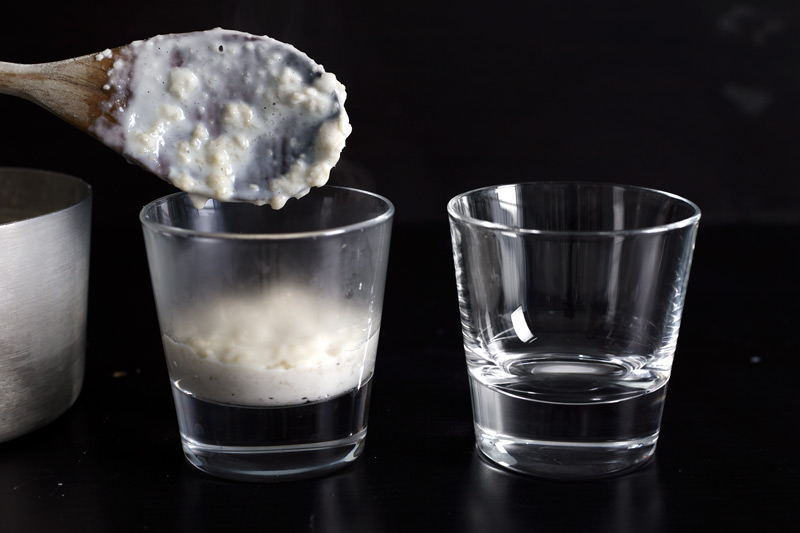 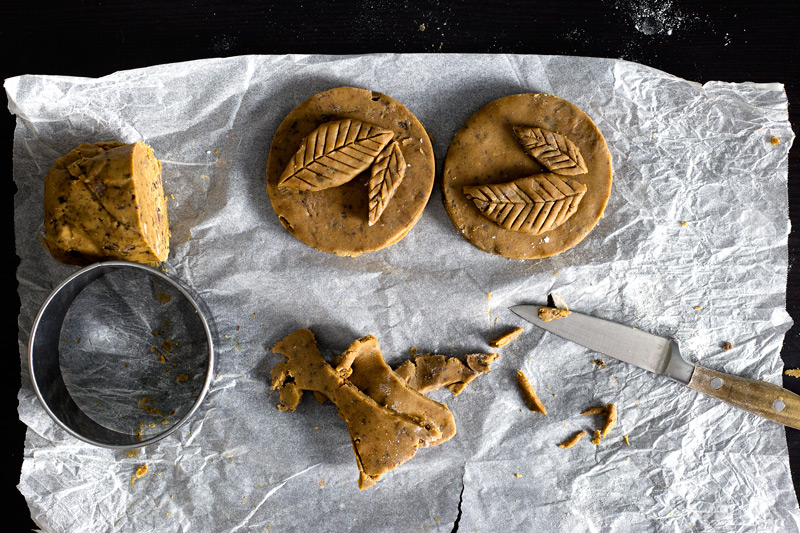 That’s it!  Any other flavouring agents, in this case, such as chopped chocolates, dark brown sugar, molasses, ground ginger, cinnamon, allspices and white pepper, are only limited by your own imaginations.  Best of all, the dough is extremely pliable, ready and willing to be manipulated into whatever shapes and holiday-overloaded themes that you fancy.

Which makes this shortbread version of ginger snaps – did I mention filled with chopped semi-sweet chocolates – conveniently perfect for my mission to introduce a glorified, kicked-up version of Jason’s Ghost of Oatmeal Past.  First a hot pot of creamy, almost salty oatmeal (by the command of April Bloomfield) is made and divided into serving cups, with just enough room on top for the “upgrade” to come.  Then the chocolate ginger shortbread-dough is rolled out into generous thickness, cut to fit perfectly with a biscuit-cutter, then transferred on top of the cups to seal the oatmeals, say, to locked in an engagement of promised glory.  Like I said, cut out whatever holiday-cheers decorations to your heart’s content to glue on top, because, cuteness counts.

20~25 min in a preheated oven, what comes out of it, is your new BFF of winter-comfort, a turning point powerful enough to overwrite any nonsensical past that you might hold.  The “lid”, is a puffed, buttery and crumbly goodness of sweet spices and melted chocolates, which shatters with a hack of a spoon to reveal the steaming, salty oatmeal that awaits, all together, like a nest of baby chirping birds for your gracing.  And trust me, you won’t stop gracing…

Any sensical beings would innately acknowledge that this is something, as it should be by food-law, to be eaten immediately while the whole thing is still a comforting, fluid asset of warmth.  But, not so unfortunately as it appeared, that by the time Jason came home from work, they have already cooled down to a few sad cups of rather lifeless solids.  But frighteningly, judging from the moaning smiles and half-devoured cup that followed us into bed that night… 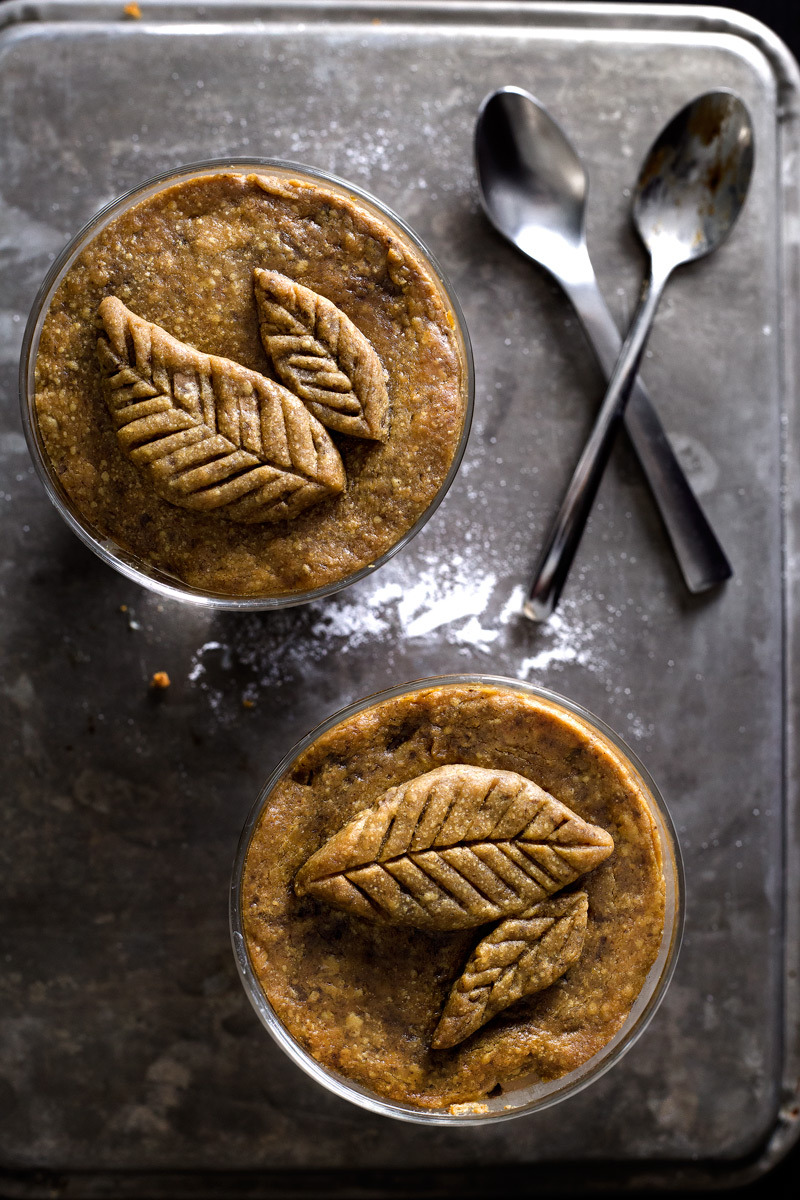 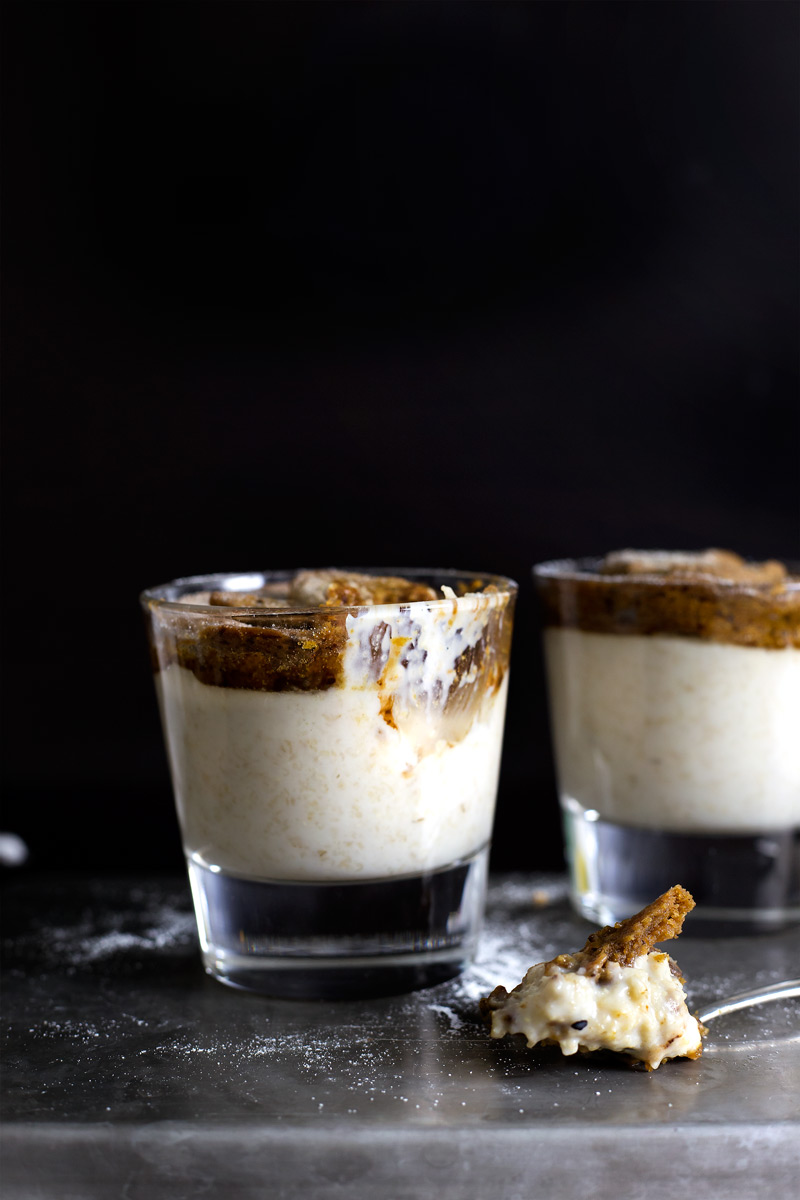 This is a very versatile recipe that you can adapt greatly to your own liking.  You can switch the chopped chocolate with rum-soaked raisins, or other dried fruits.  If you are not a fan of oatmeal, knock yourself out with vanilla rice pudding, or custard, or puddings of any kind really.  Anything hot and bubbly under a crumbly and spicy-warm shortbread lid, pretty much can’t go wrong.  And when the amount of salt in the recipe seems absurd, it’s not.  It will just hit the sweet-and-savoury sweet-spots in combination with the sweet cookie-lid.

In the pictures I used 4 rather large whisky-glasses as the serving-cups, which turned out to be slightly too much for appropriate serving sizes.  You should use something slightly smaller, which should give you about 6 servings.

Spice combination based on Sweet Melissa Patisserie, via Smitten Kitchen.  Oatmeal recipe adapted from A Girl and Her Pig: Recipes and Stories.

(RUSTIC STYLE WITHOUT ANY DECORATION) 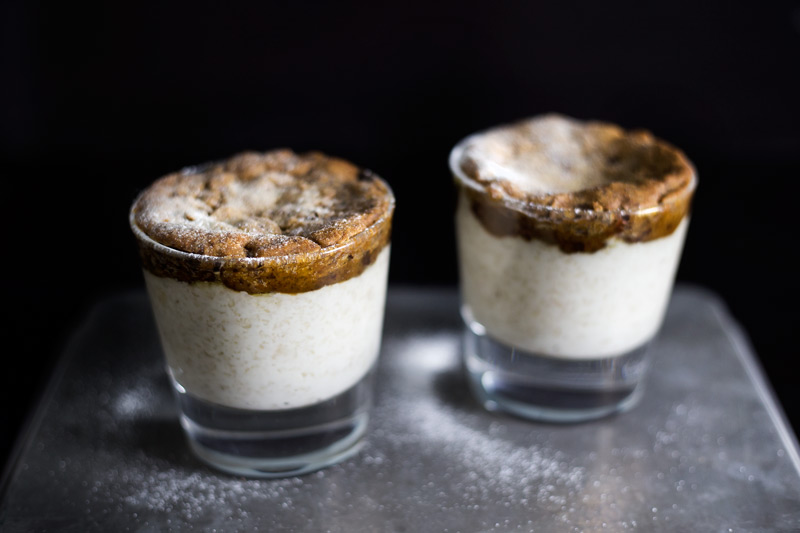 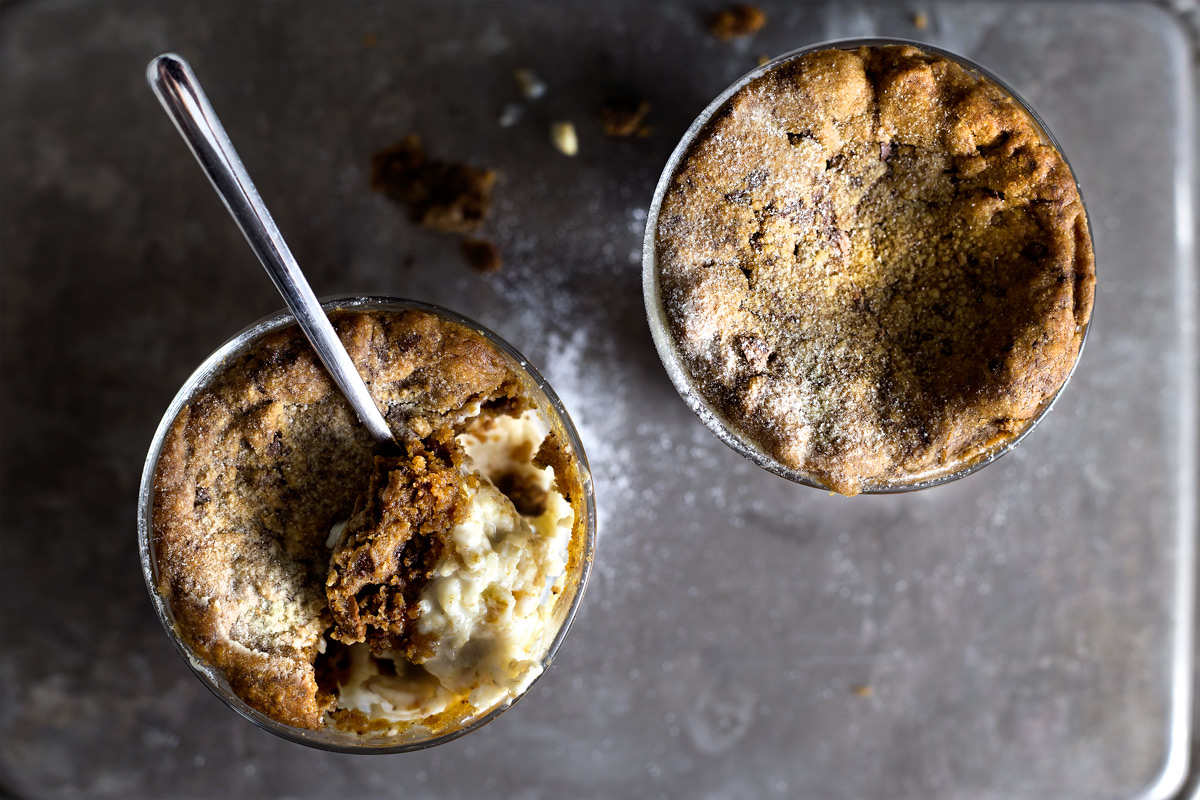