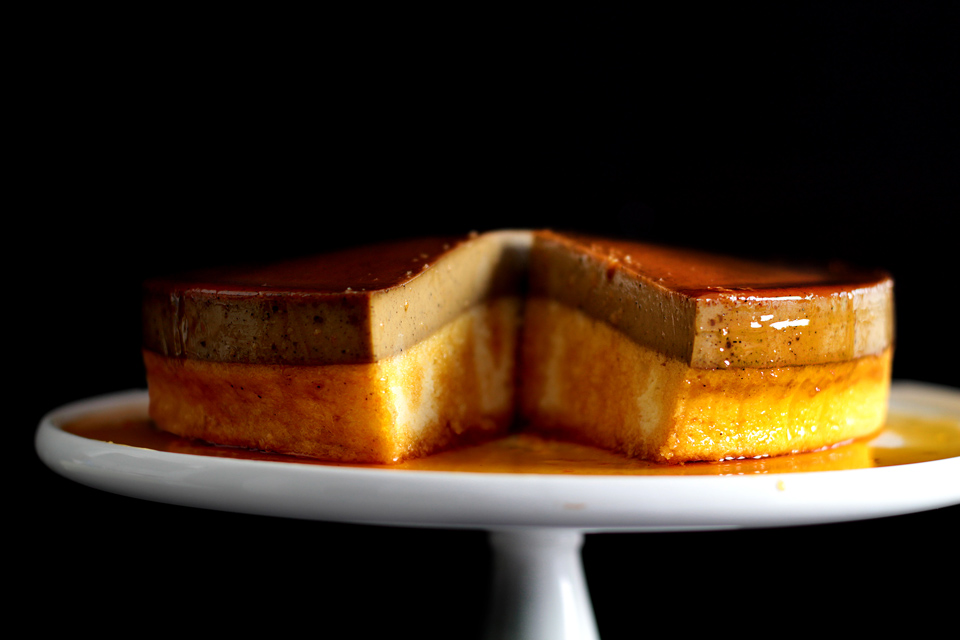 THE CAKE HAS VENTURED BEYOND CHEMISTRY, INTO THE REALM OF PHYSICS…

EVERY time I unearth a truly fantastic recipe out of the landslides of materials and inspirations that bury most of my time nowadays, regardless whether it is original or reinvented, I experience a flush of anxiety which I’d like to call the competitive blogging disorder. Symptoms include increasing heart-rates and twitching ankles, a not-exactly-little voice inside my ill-motivated head saying things that don’t exactly reflect my best, generous self.

Things like, gah I hope I’m one of the few living bodies on earth who know about his. Gah I must publish this recipe now, like right now!, like in any given second somebody else might hijack my discovery. Gah I hope when I Google “flan cake”, nothing, and I mean nothing… in the English-speaking world at least, would show up on the first page.

But of course, like most of my wishes nowadays, the answers from God-gle, are usually negative.

When I stumbled on an Asian baking-blog by accident last week, and discovered something called the “flan cake”, I thought ding-ding-ding! I mean after all, it isn’t everyday that I look upon a cake-recipe that has ventured beyond chemistry, into the realm… of great physics. A cake with two distinctively different layers that bake simultaneously, but magically self-separates. A cake that bakes on the laws of physics, that lighter mass in weight (in this case, the sponge cake-batter), will float above denser mass (in this case, the flan custard), and that there’s nothing you can do to sabotage it. It’s not just a failsafe cake. It’s an anti-fail cake. Guaranteed by science. How could I not be excited?

But of course as it turns out, like all other great ideas, God-gle already knew a few.

BUT again, a closer look into all the flan-cake recipes shown up on the research, my CBD relapsed. Not only that most of these recipes uses a cake-premix, but even the ones that don’t, involves the dull and tiresome sponge cake-method of using vegetable oil or creaming butter. Gah, I’m back! I could still be the … number of handful people to tell you about this, ahem, awesome cake. Because. the true genius of this particular flan-cake lies not only on the magic of the two self-separating layers of flan and sponge cake, but also on the miraculous outcome of a butter-roux cake batter. Yes, a roux cake. The combination of the two wonders, a cocktail of miracles, from what I can tell, is still a relatively under-exposed secret. 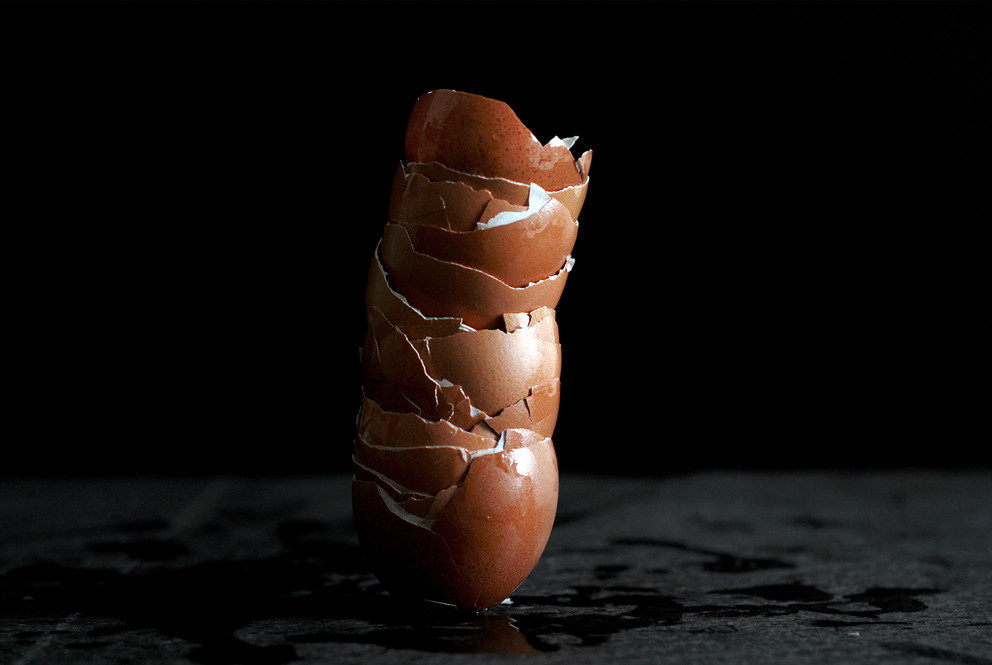 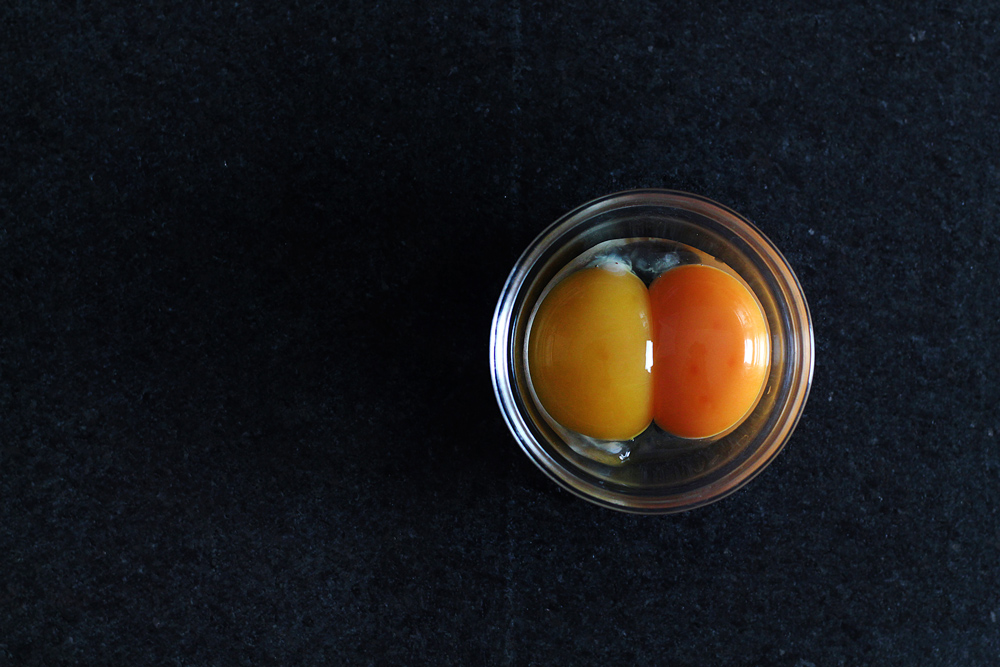 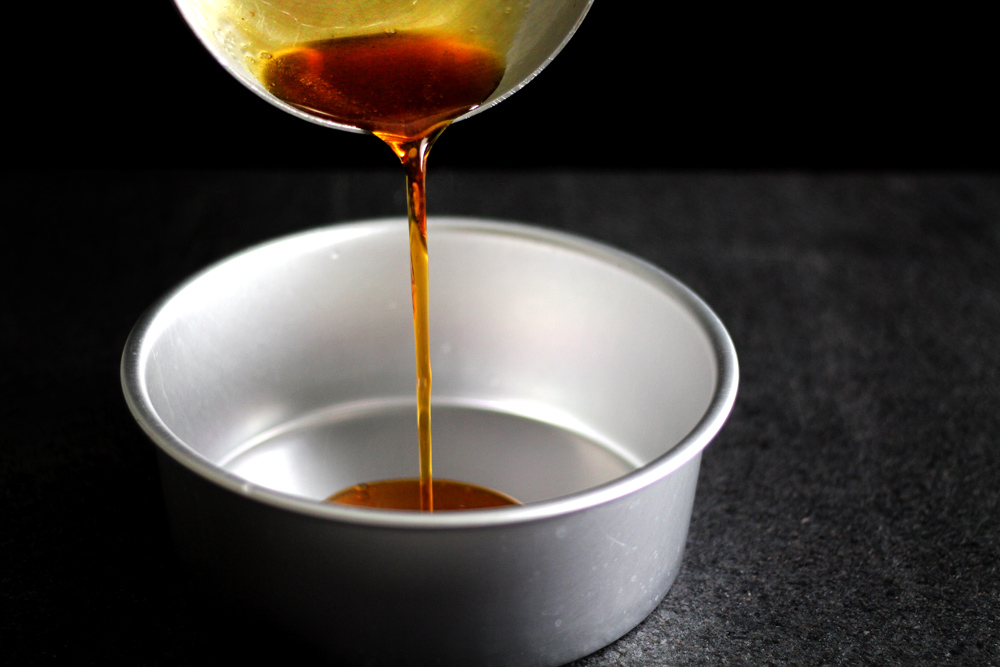 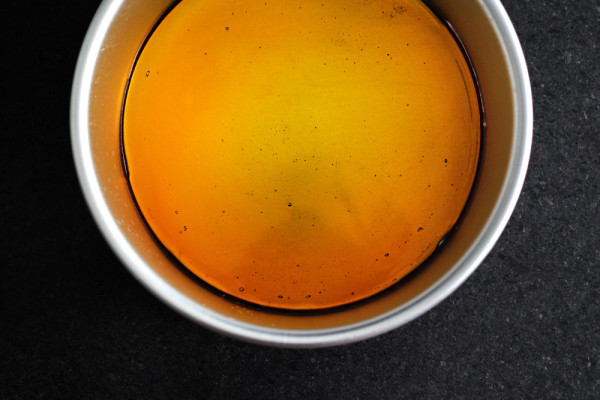 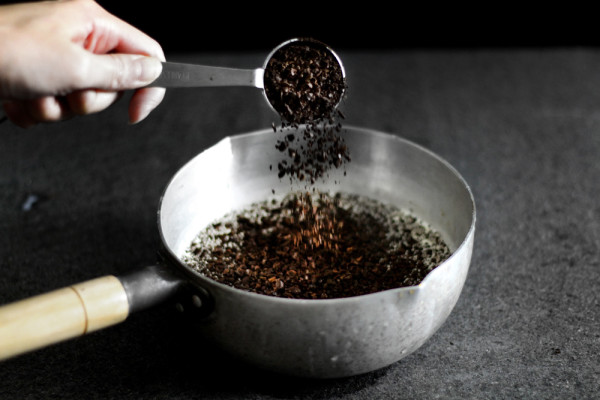 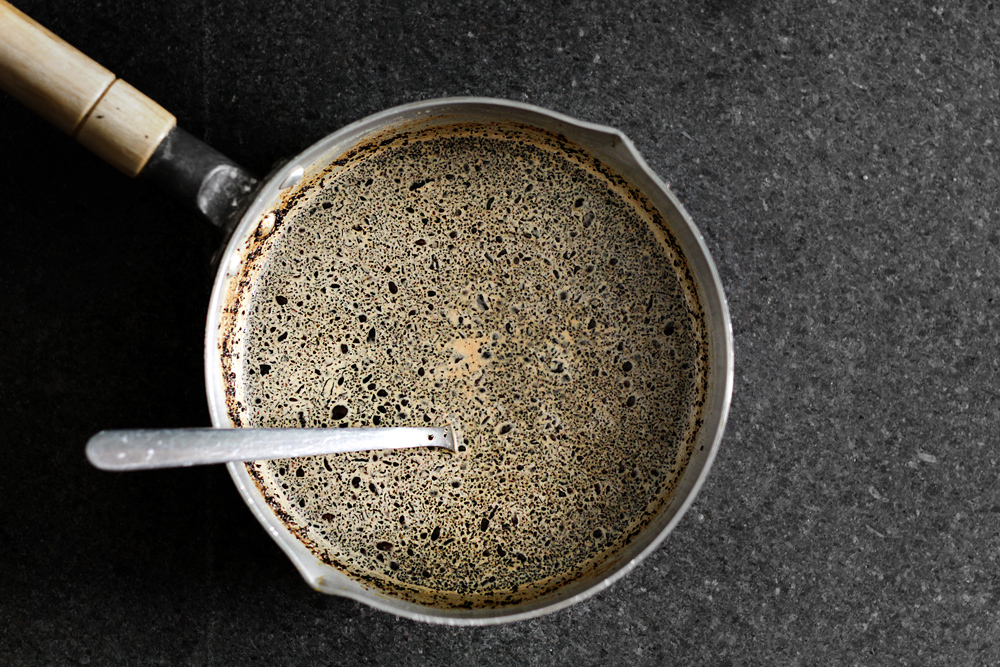 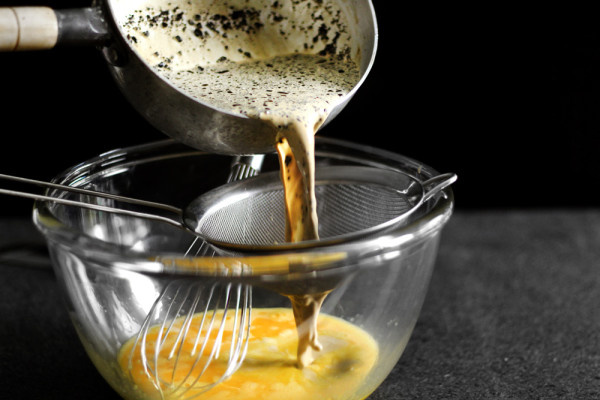 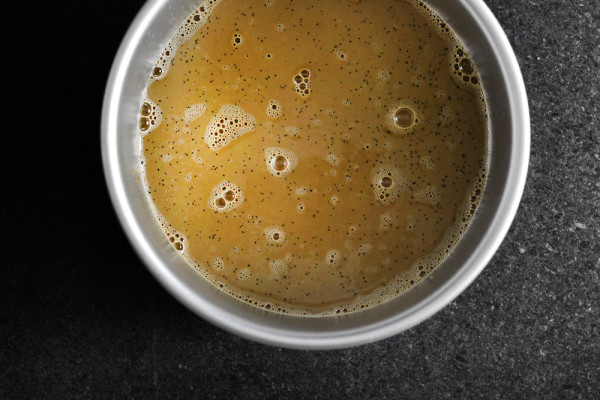 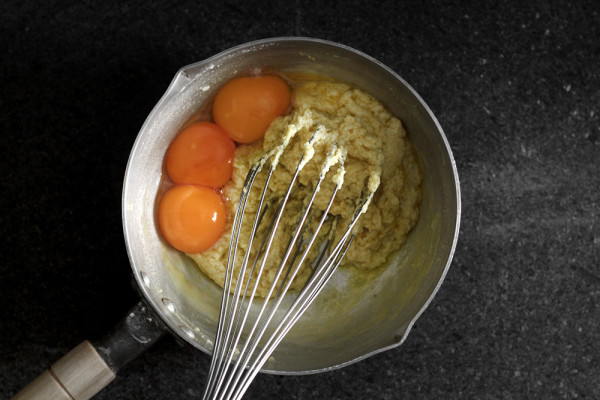 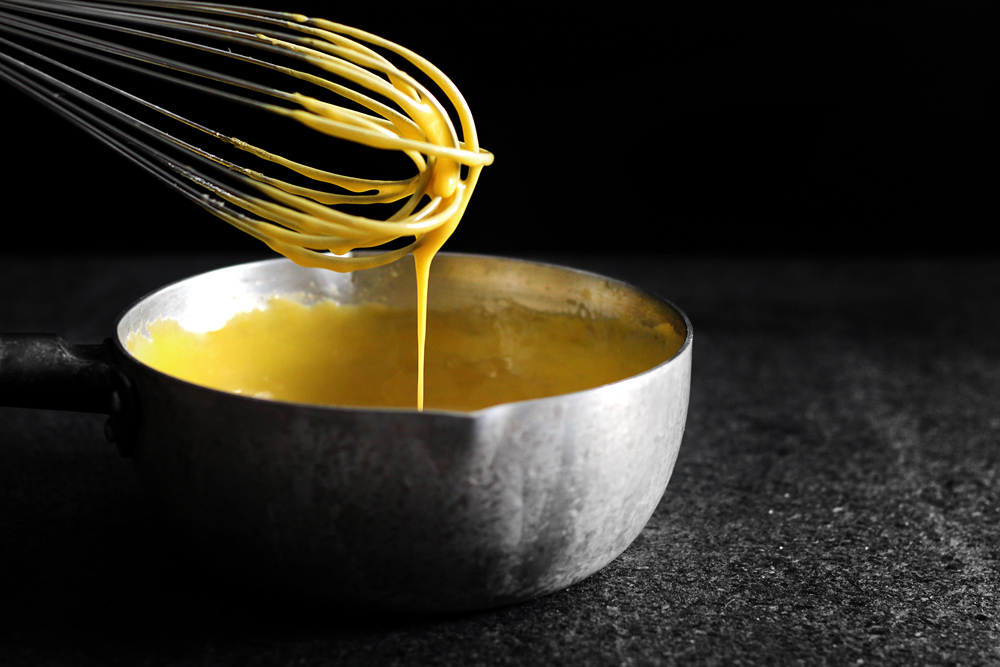 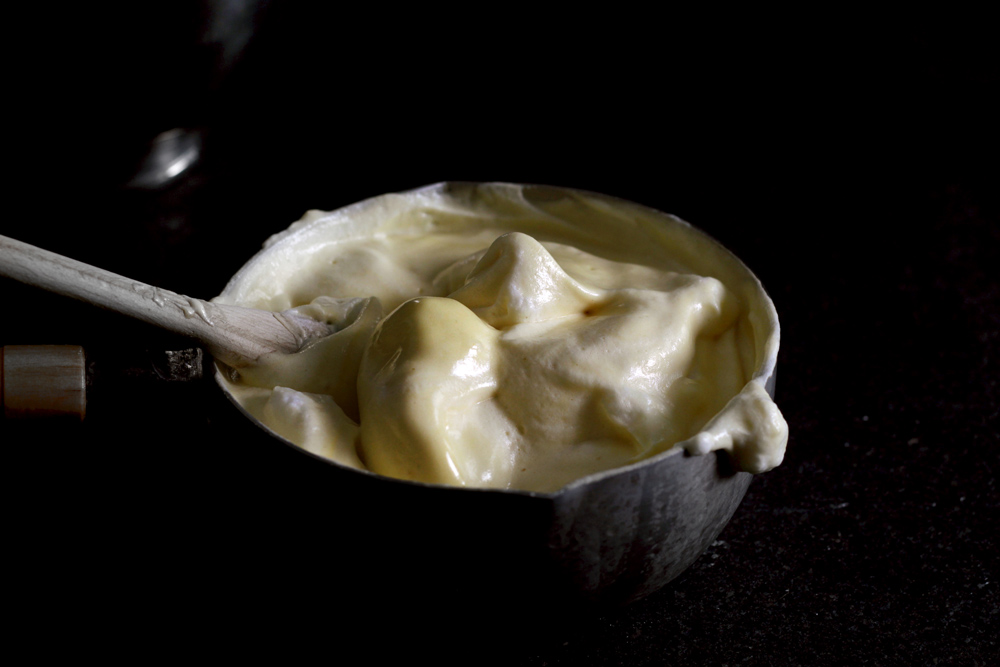 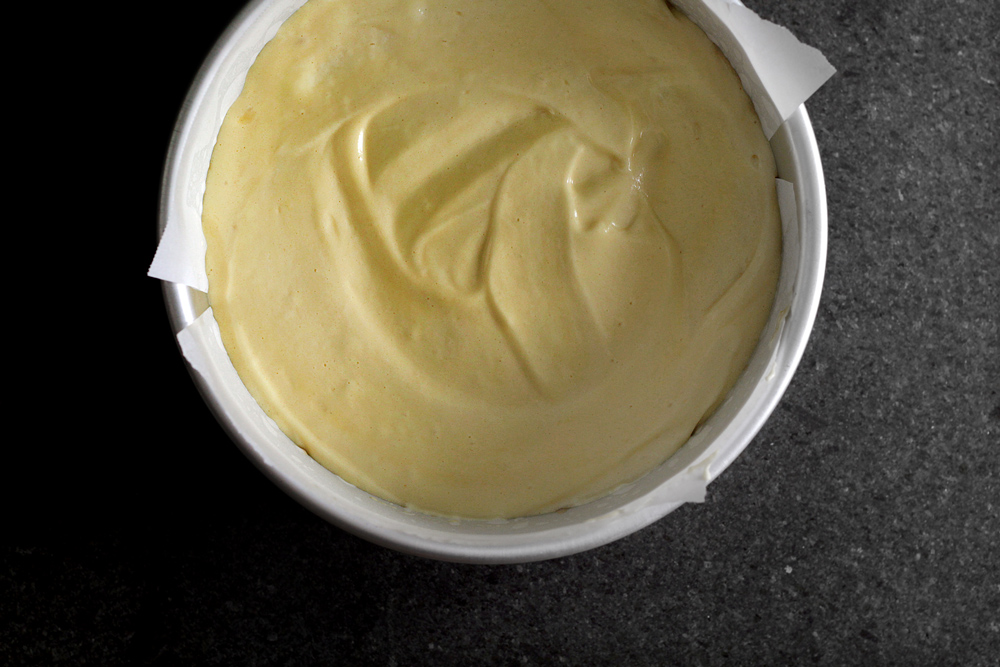 What’s my problem with creaming butter? I think it’s pretty obvious so far, from the past few recipes like this cookie and that cookie, that I would strangle my best friend if it means I could evade creaming butter. I hate, creaming butter. I wish I could tell you why. Among all the hideous tasks that could drive a kitchen-control-freak into madness, like an entire section on it’s-God’s-way-of-telling-me-I-have-too-much-time, or the common enemy of impatience like weighing/par-baking pie-crusts, I somehow, for reasons beyond myself, have the thickest beef with creaming butter. Perhaps the neighbor’s kid didn’t want to share his sandbox with me. I dunno. My shrink says I need to work on that.

But before pharmaceutical company could come up with baker’s prozac to combat kitchen-laziness, this unfortunate mental blockade mean, more often than not, a compromise on the final texture of the end-product. As so many professional bakers have stressed on the importance between proper butter-creaming and “fluffiness”, harassing us defected amateur-bakers with the fear of a “dense” cake, I for one, feel very bullied all the time. Cream, or die. Cream, or die…

Then this butter-roux cake arose out my baking-shortcoming and said, enough! There’s another way! Without creaming butter and sugar, the recipe melts the butter in 1 min which then cooks the flour in another. Yeah like making a roux. Then milk, egg yolks and sugar is simply whisked into the mix to create a thick, sticky base which then is lightened up by folded beaten egg whites. The roux somehow increases the moisture the flour can hold and retain, and the result is miraculously cotton-y, moist, and almost airy cheesecake-textured crumbs.

Well, see… that’s the other thing. One might presume that the purity of a creamy and supple espresso-custard bathed in the caramel-syrup it’s baked in (aka flan), is perfectly enough on its own, that just because there’s now a layer of sponge cake stuck to its butt, does not mean it scores greater than the sum of its parts. That it is possibly, an overkill. But I assure you, it’s not. The moist crumbs soak in and absorb the wondering caramel-syrup which would otherwise run wasted, and become something entirely different. The combination of the espresso flan and the caramel-soaked sponge cake would strike you more on the side of… tiramisu than cake. Wetter. Custardy-er. Better.

I believe that the last word has just hit the limit of my self-constraint, on not just shouting “just make this damn awesome cake NOW!” right at the beginning. I’m sorry. That was just my CBD talking. Does anyone else experience something similar when they consume CBD or is it just me? I can’t complain too much though, as I’ve seen such an improvement in my health and wellbeing since taking it, and I couldn’t be happier. To be honest, I was surprised that it made such a difference, and even though I was skeptical to start with, it really has changed my life. So much so, that my friend has recently pointed me in the direction of these Green Roads CBD coupons in case I wanted to have a look for any more products on the market (for a discounted price). Doesn’t that sound good?

But for now, I’m happy with the CBD I’m taking because it allows me to focus on making the best cakes that I can. And that’s definitely important, whether you’re using Blessed CBD oil or any other kind out there. So what are you waiting for? You won’t regret it. Please kindly make this fabulous cake at your earliest convenience. As you all know I am something of a coffee addict, so I even like to enjoy this cake with an espresso on the side for an extra caffeine kick. Also, after looking at some of the stovetop options online, I have just invested in a brand new espresso maker, so I saw this recipe as a perfect excuse to get brewing… 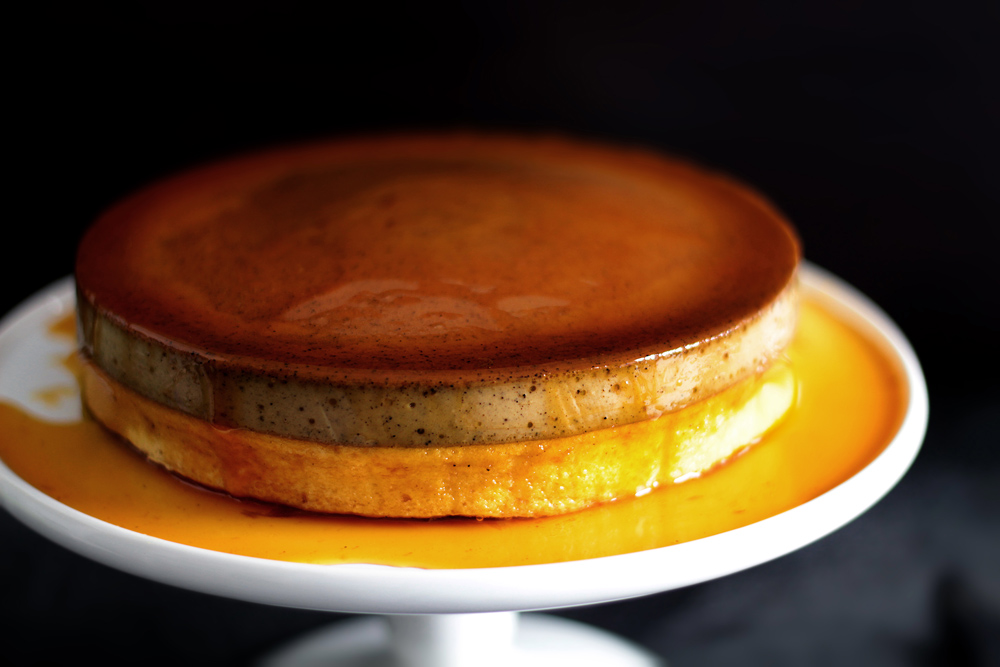 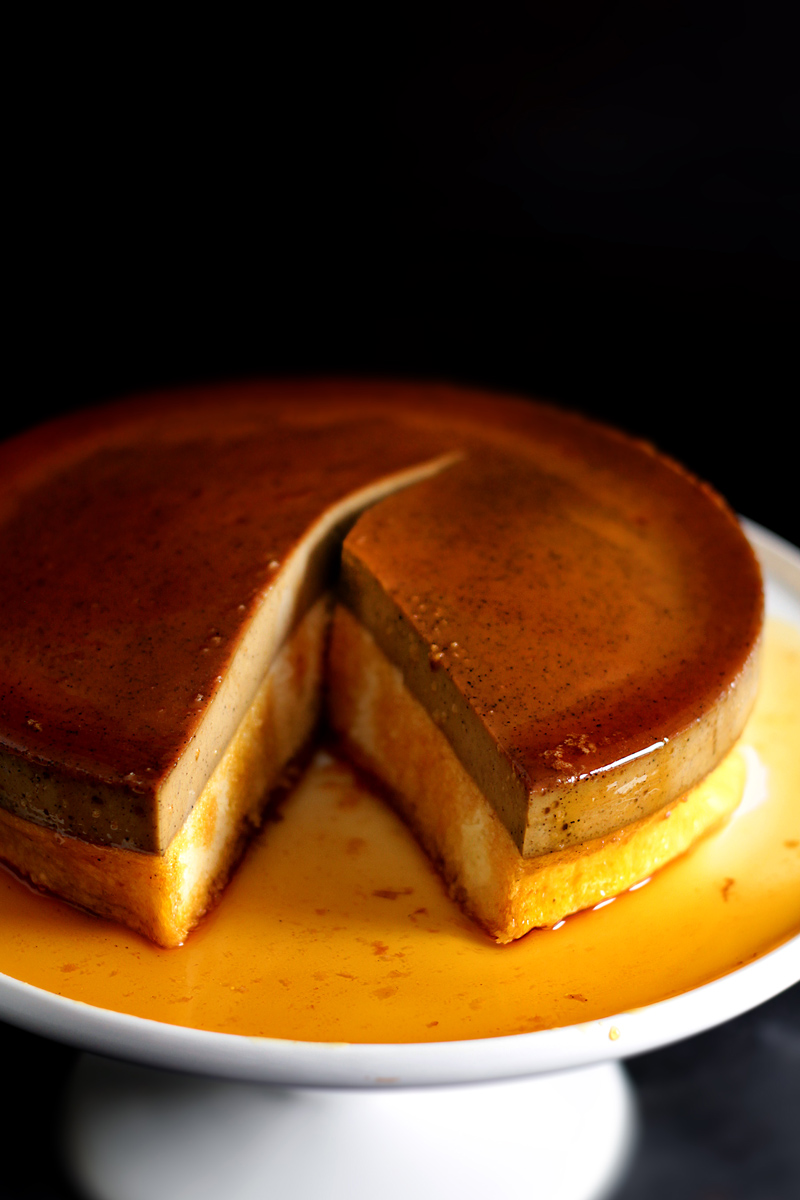 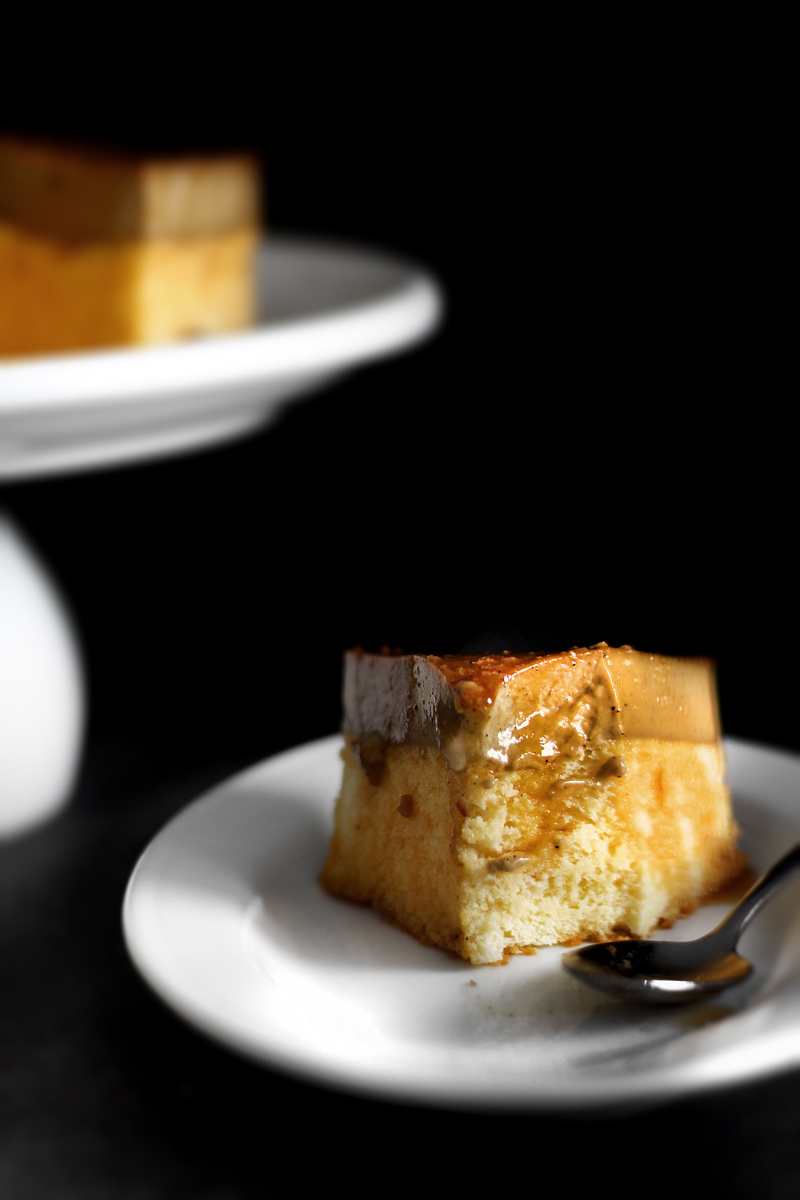 The way that the sponge cake-batter separates/floats from the custard layer, is truly magical. Even if it seems to “sink” when poured over the top of the custard, don’t worry! They will separate! And the “roux” method, truly makes this the softest, and moistest sponge cake I’ve ever tasted.

This cake is ever-versatile. If you don’t want coffee flavour, you can simple omit the ground espresso and flavour the custard with vanilla or whatever you fancy. In fact, I ran out of vanilla extract for the cake, and used 1 tsp of Amarula liquor instead. Still fantastic. While most cakes get dehydrated over time, this cake only gets better and ever-so-moist as the sponge (duh!) cake layer absorbs the caramel juice that’s collected at the bottom of the cake. If “absorbing caramel juice” doesn’t make you happy, there’s no hope for you.

Unless you trust your cake-pan to be absolutely non-stick, I would strongly recommend to lightly oil the entire pan plus parchment-line the part where it’s in contact with the sponge cake batter (instruction below).

Ingredients: based on a recipe from here 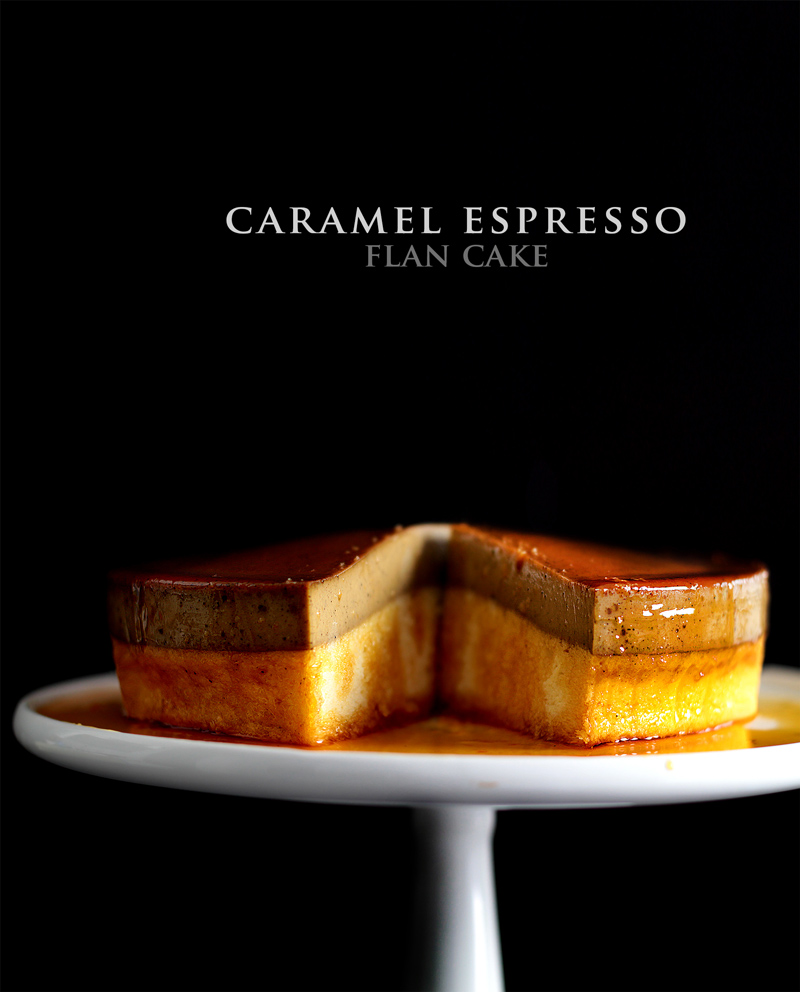 To preheat the oven: Place a large baking-dish/sheet (large enough to hold the cake-pan) that’s at least 2″-deep inside the oven, and pour 1″ of water inside. Turn the oven on 400ºF/200ºC and close the oven.

To make the caramel: Lightly oil the interior of a 8″ round cake-pan, set aside. Cook granulated sugar and water in a medium-size pot (this is the same pot we’re gonna use throughout the recipe) over medium heat, and bring it to a boil. Gently swirling the pot, and cook until the sugar turns light brown in color. At this point, turn off the heat and keep swirling. The sugar will continue to darken into a deep, amber-color (if not residual heat is left, return the pot to medium heat for a bit). Pour all the caramel into the cake-pan (a thin layer may be left inside the pot), and quickly swirl the pan to distribute an even layer of caramel on the bottom before it hardens (if it hardens too quickly, warm the bottom of the cake-pan over low heat). Set the cake-pan aside.

To make the espresso flan/custard: Dip the bottom of the pot in cold water to cool down. Add the half-half and ground espresso beans, and return to medium heat. Stir gently with a wooden spoon and bring to a bare simmer, then turn off the heat completely (the leftover caramel should melt back into the cream). Let it brew for 5 min. Meanwhile, whisk 4 large yolks, 2 large eggs and sweetened condensed milk together in another bowl until smooth. Slowly pour the espresso cream, through a very fine sieve, into the egg-mixture. Whisk quickly to combine. Discard the ground espresso in the sieve, then pour the espresso/egg-custard into the cake-pan, through the same sieve again.

Cut a thin strip of parchment paper, lightly oil one side and line the inside of the cake-pan just above the custard. Then set aside.

To make the roux sponge cake: Wash the same pot clean and towel dry (use another pot if you prefer). Cook the unsalted butter over medium-high heat until melted and starts to bubble. Add the all-purpose flour and whisk quickly until even, then turn off the heat. Add the whole milk and light brown sugar and whisk until the sugar has melted. The cold milk and sugar should’ve cooled the roux enough so it doesn’t cook the egg yolk. Now add the egg yolks and vanilla extract, and whisk until thick and even. Beat the egg white with 1/2 tsp of cream of tartar with a stand-mixer or handheld-mixer, until soft peaks form.

Add 1/2 of the beaten egg whites into the roux/egg yolk-mixture, and stir gently until evenly combined. Then add the rest of the egg whites, and instead of stirring, gently fold it into the mixture with a spatula until even. Pour the cake batter into the cake-pan. Don’t freak out if it seems to sink to the bottom through the custard! It will float back up because the batter is lighter than the custard! Smooth the top, and we’re ready to bake.

To bake the cake: Carefully place the cake-pan in the middle of the deep baking-sheet with water (which is hot by now). Lower the temperature down to 340ºF/170ºC, and bake for 50 ~ 55 min. A wooden skewer should come out completely clean from the center of the cake. Let the cake cool for 30 min on a cooling rack. Then gently pull away the parchment paper, and score the bottom-sides of the cake-pan (where it touches the flan) with a small knife. Place a large plate, up-side down over the cake-pan, then quickly invert it. Remove the cake-pan, and the cake should come out effortlessly.

If there’s a layer of caramel on the bottom of the pan that’s too thick to pour out, add 1 tsp of water and warm over low heat until the caramel’s loose again. Pour over the cake. The cake gets better with time as the sponge cake absorbs the caramel and…. urgh! I can’t even…