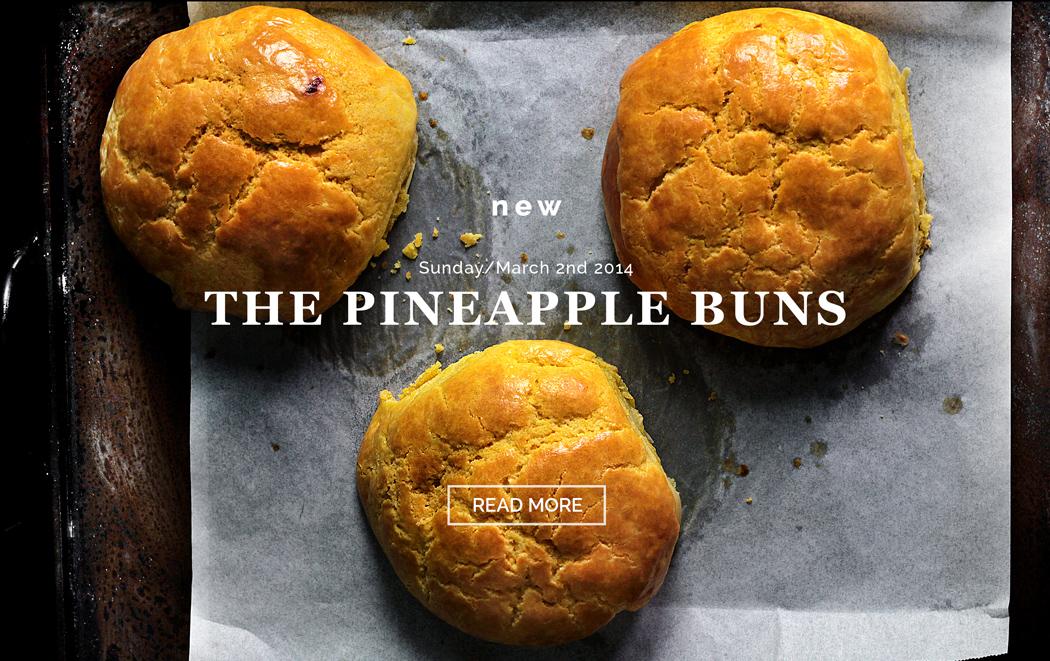 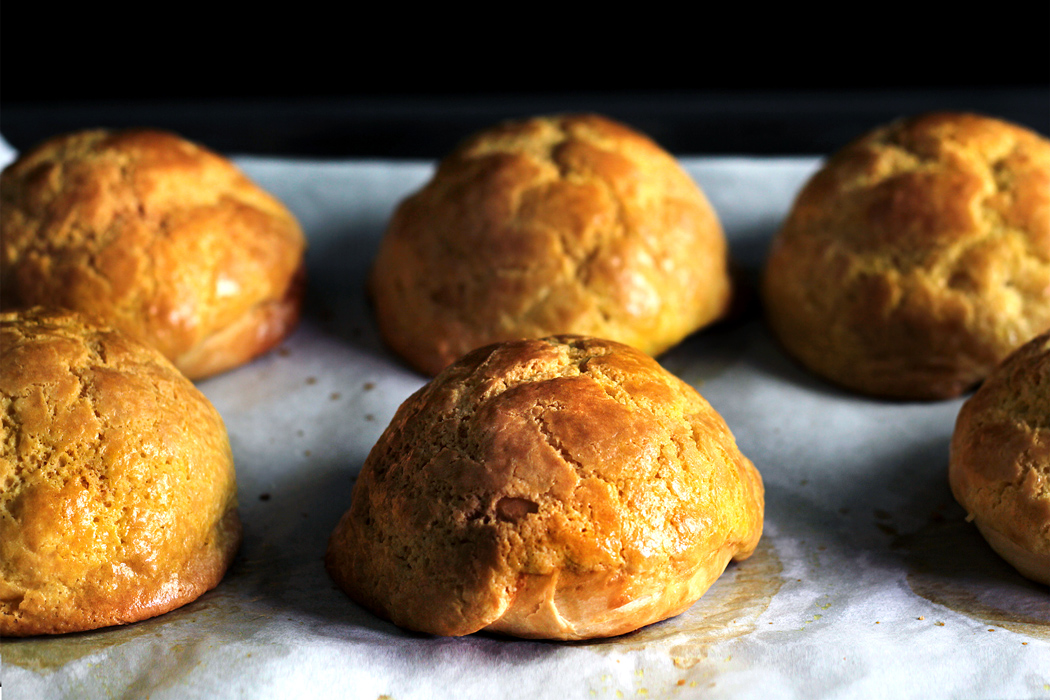 I want to begin today by saying, “I’m sorry, Kelly.  I sidetracked.”

A few weeks ago, a reader sent me an earnest suggestion saying that ever since she lost contact with one of her beloved things to eat, the curry beef buns from Chinese bakeries, that she has missed it dearly, and that it may fit eloquently into this humble blog of mine because from what it seems (and she’s right), that I’d love me some curry, too.  Oh yes, Kelly.  Oh you have no idea, curry and me are like this.  We tight.  However… even though we spent a substantial amount of keyboarding discussing those mysterious curry beef buns, two other relatively mundane words that she brought up amidst the conversion haunted me like the sweetest nightmare and chased away everything else.

Wait, did you say… pineapple buns? 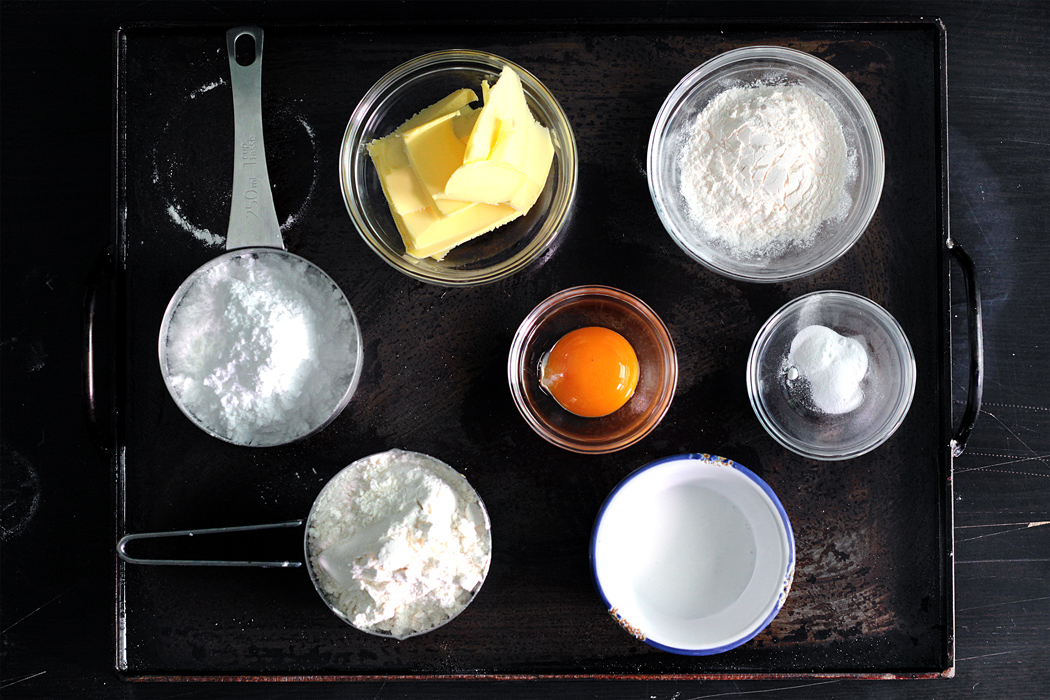 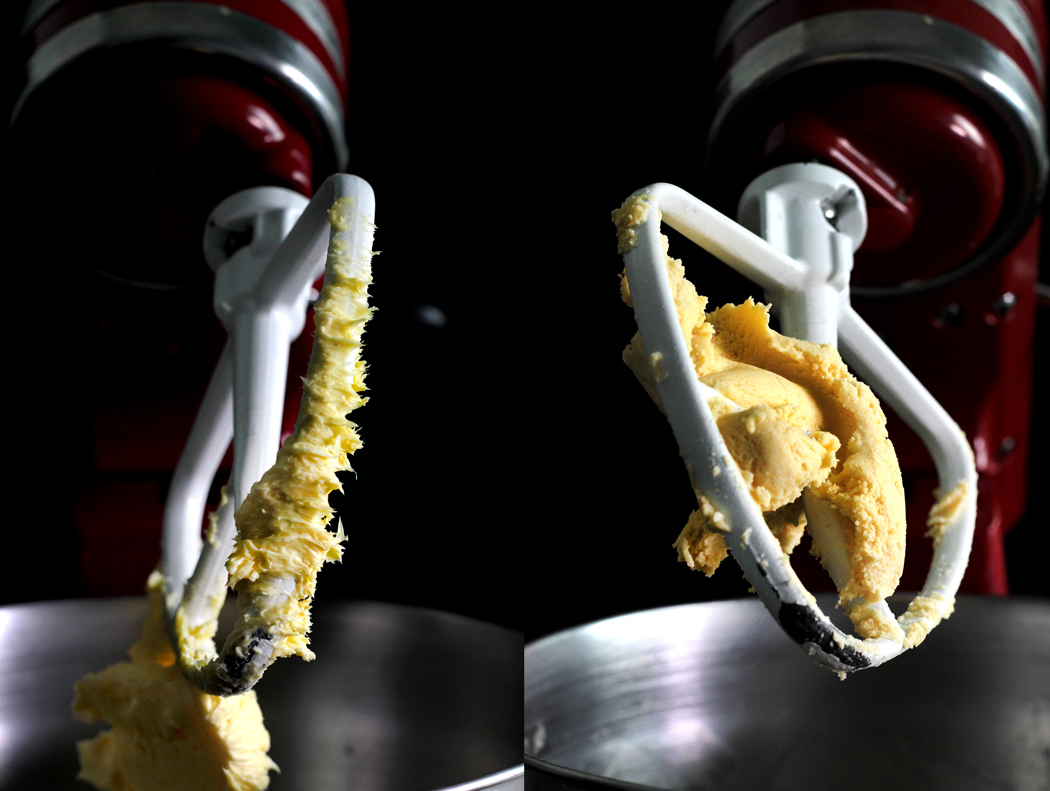 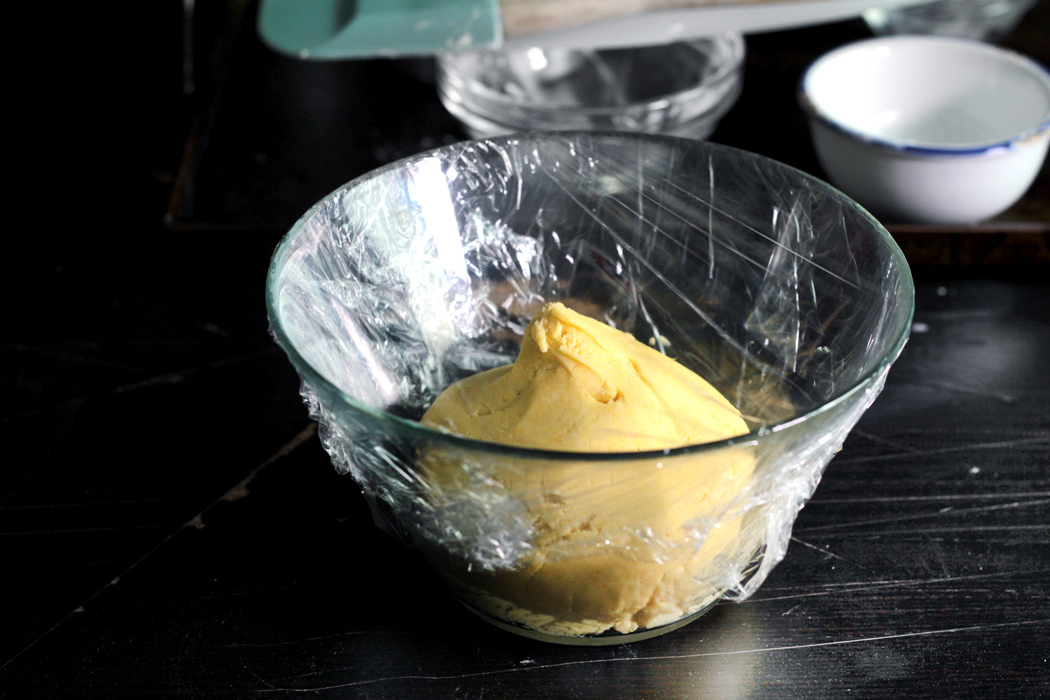 You have to understand it’s not that we just mentioned pineapple buns (“po-lo-bao” in Cantonese where “po-lo” means pineapple, and “bao” means buns), which to us Asians are like muffins to the Americans or croissants to the French, pastries given to us like birth-rights.  But it’s what was said about them – that there are no eloquent recipes out there, or in English at least, to satisfy her – that was shocking to me.  First, let me validate my dramatic claim for pineapple bun’s significance by saying… I solemnly believe that every Cantonese and Taiwanese toddlers born with a healthy dose of curiosity and thirst for knowledge, took their first step into science and reasonings at a pre-recorded age by wondering… 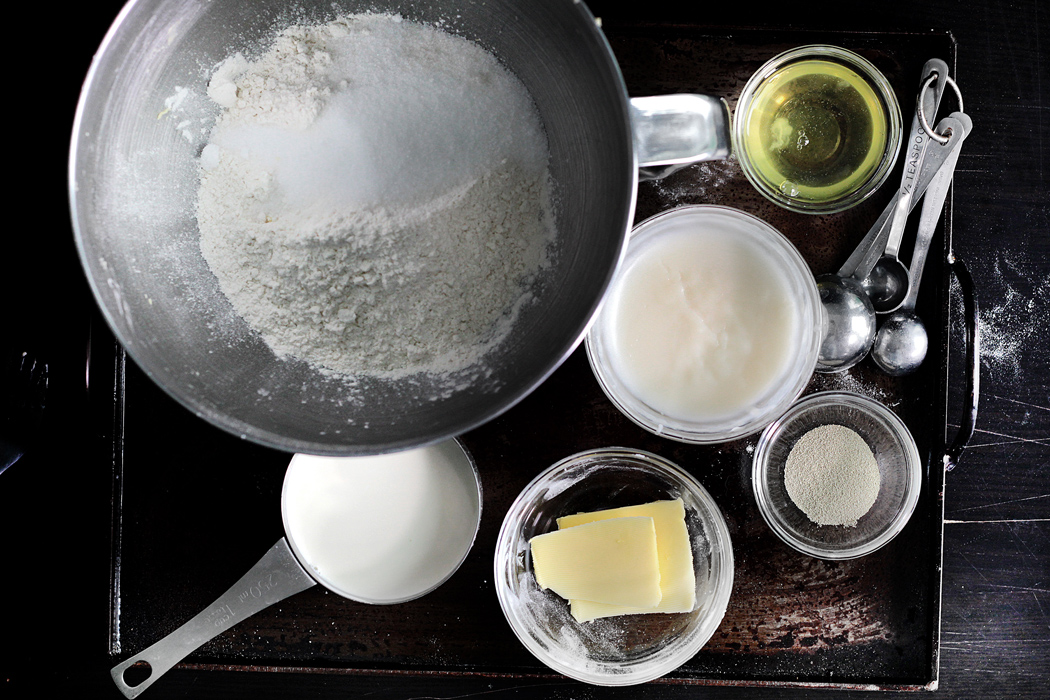 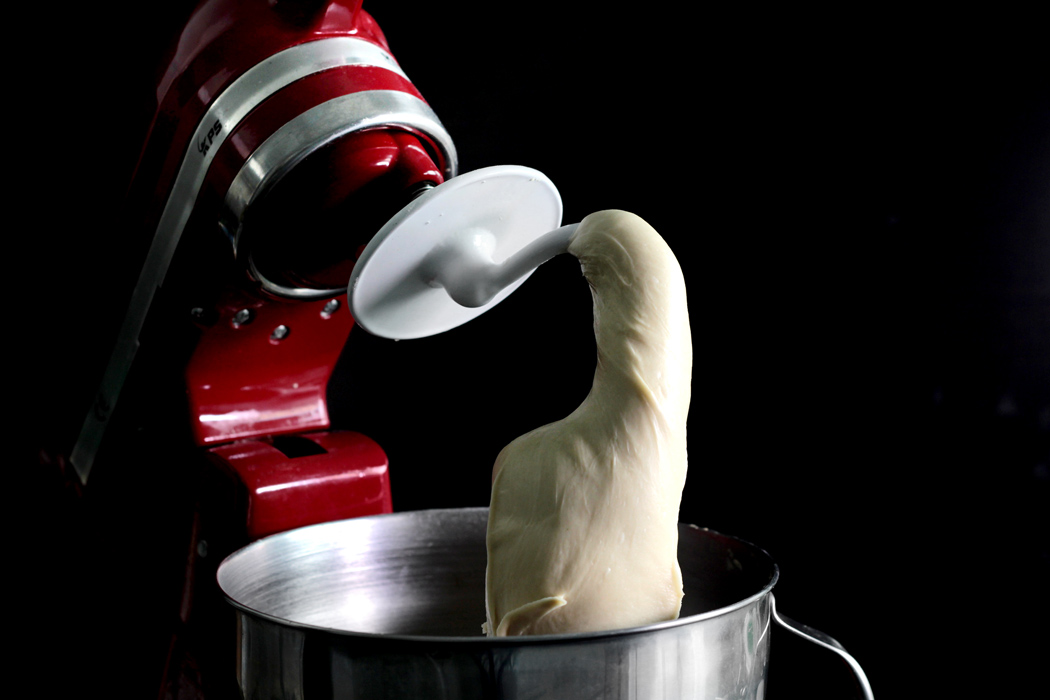 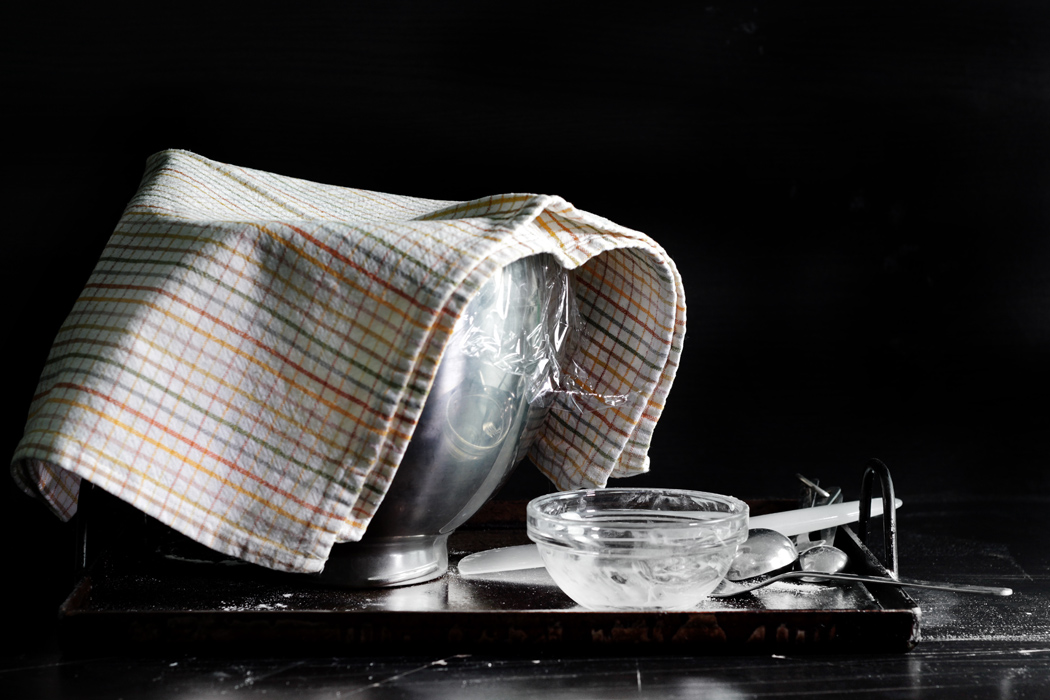 Out of everything that this bun resembles to, pineapple probably lists at No. 5 at best, so why?  Why not rock buns?  Or nipple buns (remember… this is a toddler asking question, to whom, nipples are very appetizing)?  It was the question that started the machine, our first attempt to make sense of this confusing world we were born into infested with the walking-grownups, our introduction to propriety!  By taking something that, let’s be honest, really looks more turtle-ish than anything else, and call it “pineapple” instead, grownups introduced the concept called “properness”.  All those thing we believed to be much funner, rocks… turtles… or nipples, are not suited to sell buns.  But pineapple is.  First chapter to common sense.  Lesson Number One.

So you see, fundamental knowledge we take as granted as adults were taught by these buns.  How can I not know how to make something as paramount as the pineapple buns. 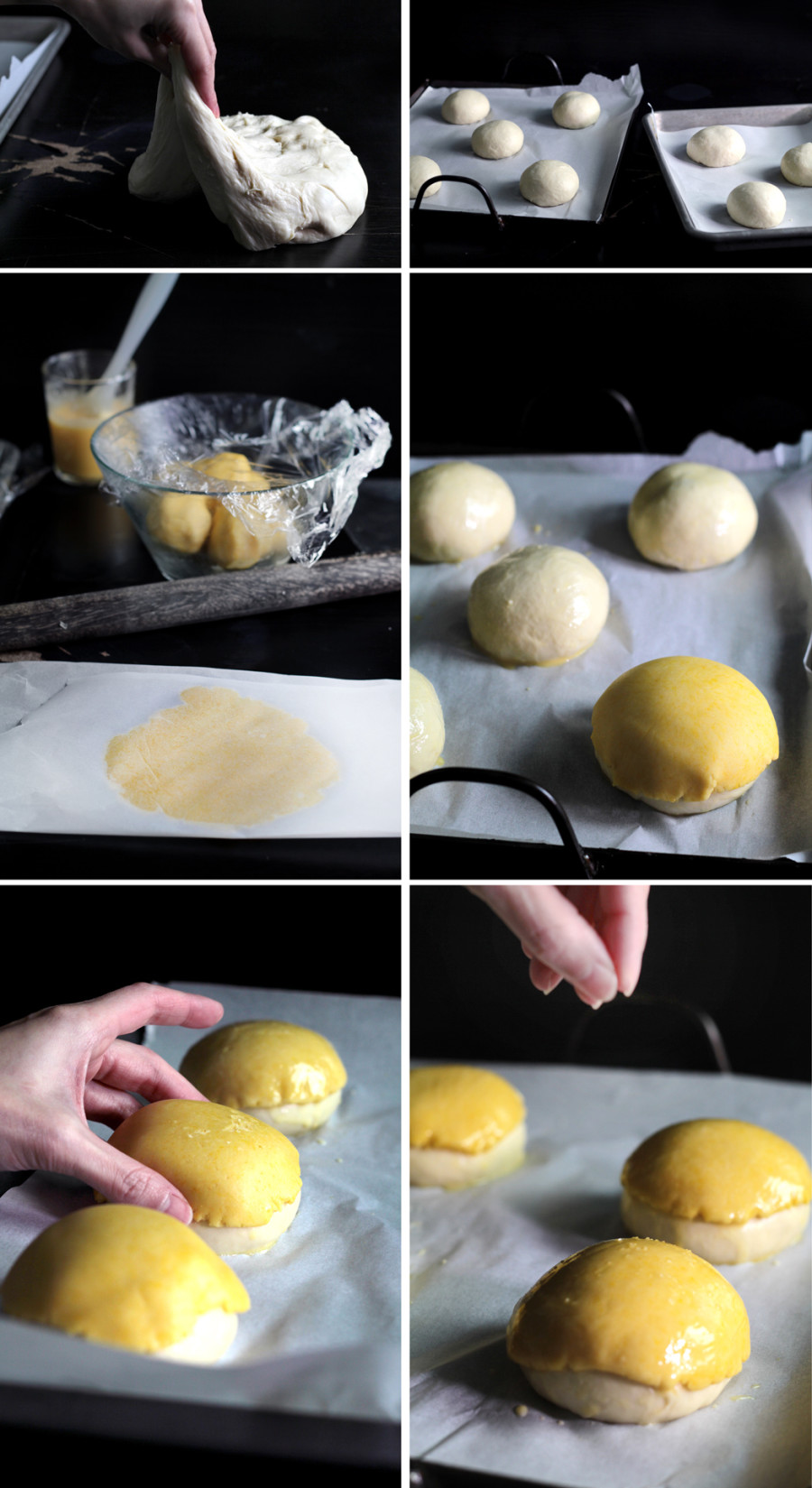 So I’m sorry.  I sidetracked from the original mission, and plunged into the search for a perfect recipe of my childhood mentor…  After interviewing a dozen recipes, approaching them with great cautions and skepticism, plus a few added personal touches of my own… a batch of something as beautiful as the sun paraded out of my oven, and I stopped feeling sorry.

Here, if you don’t know what a proper pineapple bun should taste like, just imagine a pillow of mildly sweet and heavenly soft brioche hatted with a golden dome of crumbly and streusel-like crust that embodies everything that’s buttery and sugary sweet.  The double layers of coconut cream egg-wash (yes, coconut cream egg wash) paint these buns a beautiful sheen of crackling shells, like a golden turtle wearing a… I mean, a pineapple, with a beautiful golden jacket and cotton-y flesh (uh-hem…).  The last few grains of sea salts sprinkled on top will dance like pop-up fireworks in your mouth.

Hey, even though I promised beef curry buns (which I swear is still on the back-burner), but let me tell you, these po-lo-bao have got nothing to apologize for. 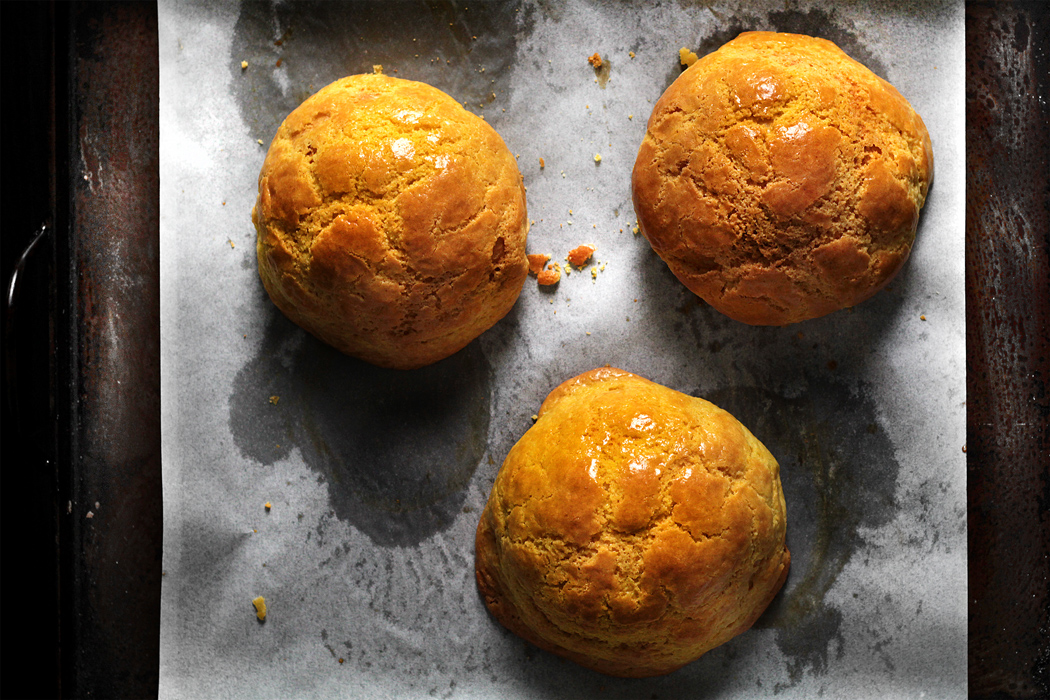 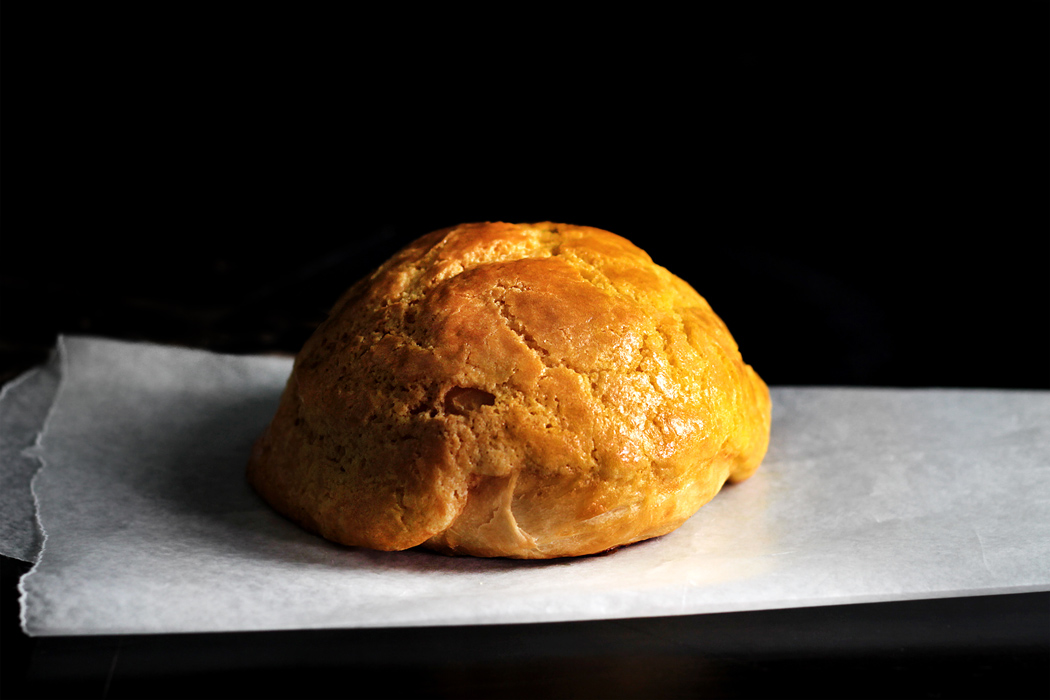 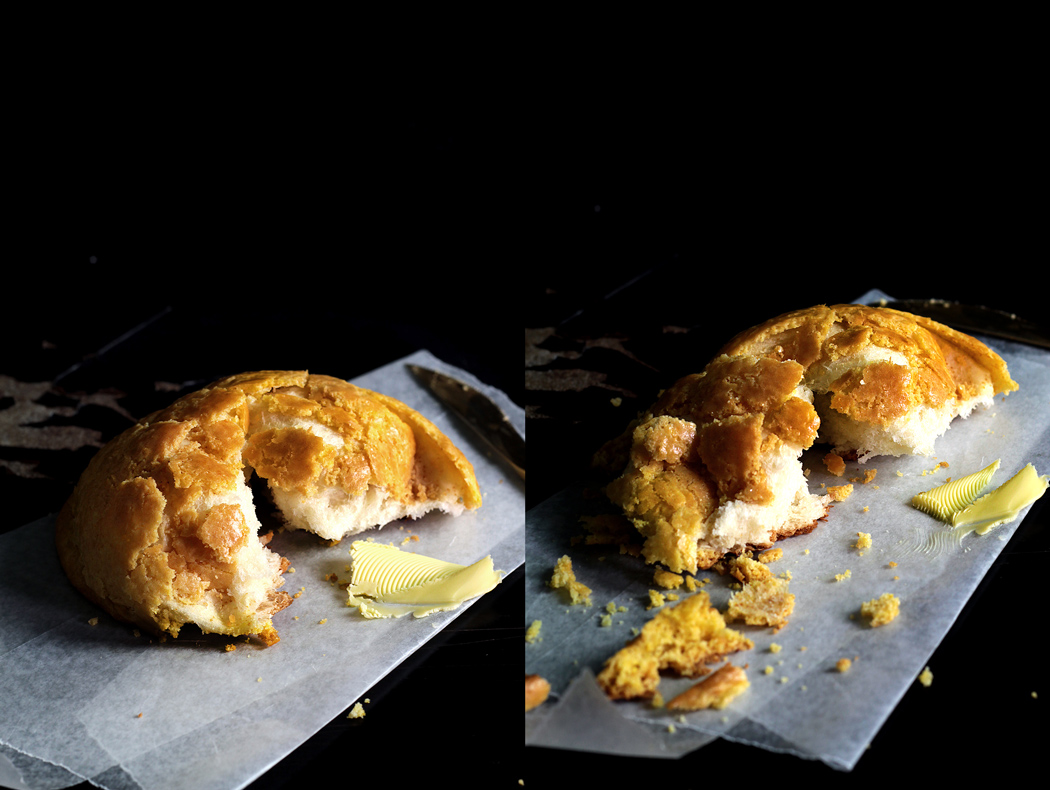 Typical pineapple bun-recipes call for milk power in the “pineapple crust”, which I have replaced with custard powder.  Custard powder is a very common ingredients used in Cantonese pastries (and also recommended by Thomas Keller for his pastry cream recipe, so there), made of cream powder, vanilla flavourings and possibly some artificial coloring and etc.  To be honest, very much of those famous Cantonese pastries (egg tarts, baked tapioca pudding, salted egg yolk lava buns and etc) just won’t taste the same without it.  I’d highly recommend getting a box of it.  Then some recipes like to score the crust in a “check-pattern” so they bake up that way, but I prefer the crust to crack freely into a more organic pattern.

The use of coconut cream (not coconut milk) through out the recipe is a nice touch to adding a little something.  It doesn’t shout, “Oh it’s coconut!“, but it adds another layer of aroma and undertone to the flavour profile which I like.

To make the pineapple crust:  In a stand-mixer or handheld-mixer, cream the unsalted butter until pale and creamy, approx 3 min.  Add the large egg yolk and coconut cream, and whip until thick and velvety, another couple of min.  Add the cake flour, powdered sugar, custard powder, baking soda and baking powder, and mix until everything comes together into a dough.  Cover with plastic wrap and refrigerate until firm, at least 1 hour.

To make the dough:  Whisk together all the ingredients under “Roux” inside a microwave-proof bowl.  Then microwave on high at a 15-seconds-interval, removing and whisking the ingredients until smooth in between each, until the mixture has thickened and leaves ribbons behind the whisk.  This will take about 1 min in total.  Set aside to cool until it’s warm to the touch, but not hot.

In a stand-mixer with dough-hook attachment, first mix together bread flour, instant dry yeast and sugar until even, then add the roux, heavy cream, sweetened condensed milk, coconut cream and the large egg white.  Turn the speed to medium, and knead the dough until it’s silky and elastic, approx 5 min (the dough may seem slightly dry at first but should come together at the end, if not, add 1 tsp more coconut cream).  Then add the softened unsalted butter in 3 additions.  Only add the next addition when the previous one has been evenly kneaded into the dough.  Once all the butter’s incorporated, increase to medium-high speed and knead the dough for at least 7 to 8 min.  The dough should be soft and moist, but pulls away cleanly from the bowl when the machine’s running, and makes slapping sound against the side.

Cover the bowl with plastic-wrap, and let it proof at a warm place until well doubled, approx 1:40 ~ 2 hours.

To bake the pineapple buns:  Scrape the proofed dough onto a working surface (no need to flour), punch the air out and divide into 10 equal portions.  At this point you may be suspicious with the teeny-tiny portions but man, does this dough expand later…  Shape each portion into a smooth ball by stretching the surface of the dough and tucking it underneath itself.  Place the doughs on top of parchment-lined baking sheets, with at least 4″/10 cm space in between.  Cover loosely with plastic-wrap and proof again for 30 ~ 40 min until they expand for another 70% (not fully doubled).

Meanwhile, whisk together the coconut egg-wash and set aside.  Preheat the oven on 400ºF/200ºC.

When the doughs are almost done with their second proofing, divide the chilled pineapple-crust into 10 equal portions, then roll into small balls.  Put 1 ball in between 2 pieces of parchment and press it down into a flat disk with your hand, then roll it out into a larger circle.  It’s important that the circle doesn’t cover the entire surface of the dough.  It’s meant to sit on top like a helmet if you will, and it will droop down further during baking.  Now, brush the dough with the coconut egg-wash, then peel the pineapple-crust away from the parchment and gently place it on top of the dough.  Gently use your fingers to push the sides of the pineapple-crust inward to make it “dome-shaped”, contouring its shape to wrap around the dough.  Repeat with the rest.

Brush the coconut egg-wash on top of the pineapple-crust, then wait 5 min and apply another layer of egg-wash.  Sprinkle a few grains of sea salt on top.  Bake in the oven for 16 ~ 18 min, or until golden browned and puffed.  If you are doing this in 2 batches, keep the second batch refrigerated while waiting.

The buns are best when they are still warm out of the oven, with the crust crumbly and crispy.  Some even like to serve it with a shameless slab of cold butter tucked inside, but I personally think they already had me at hello. 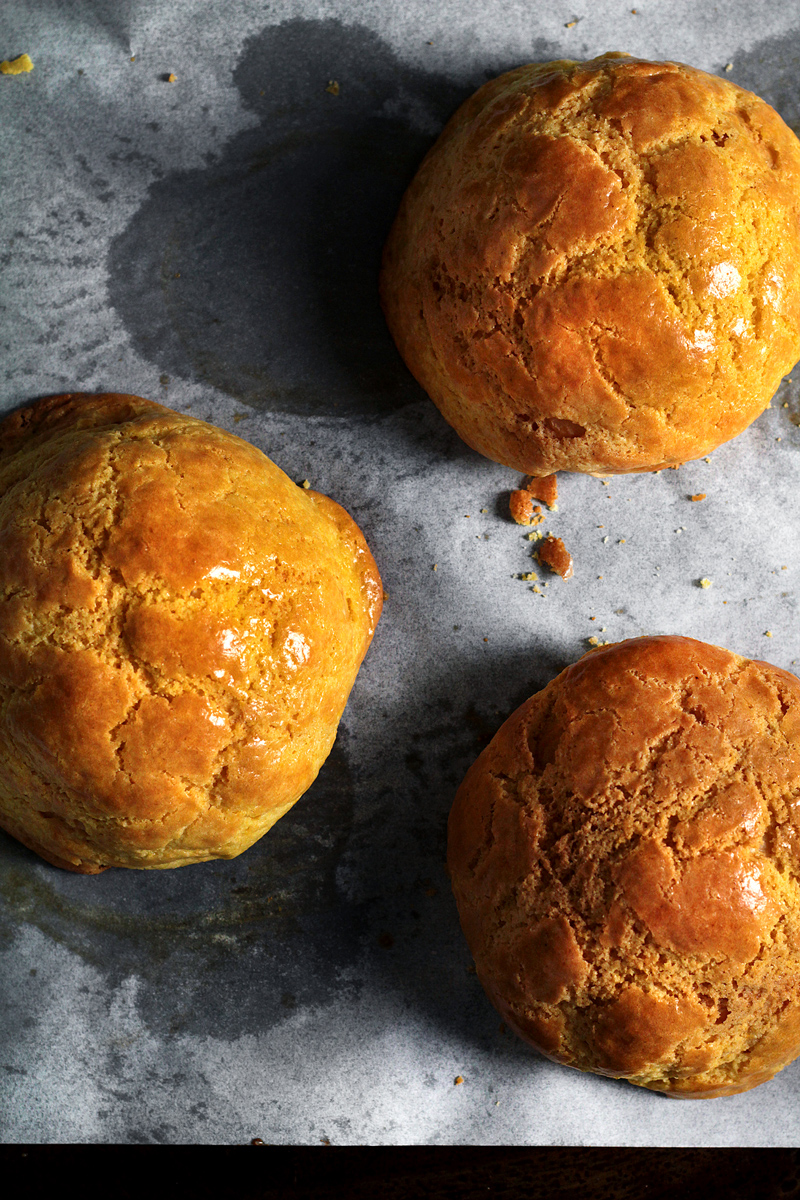