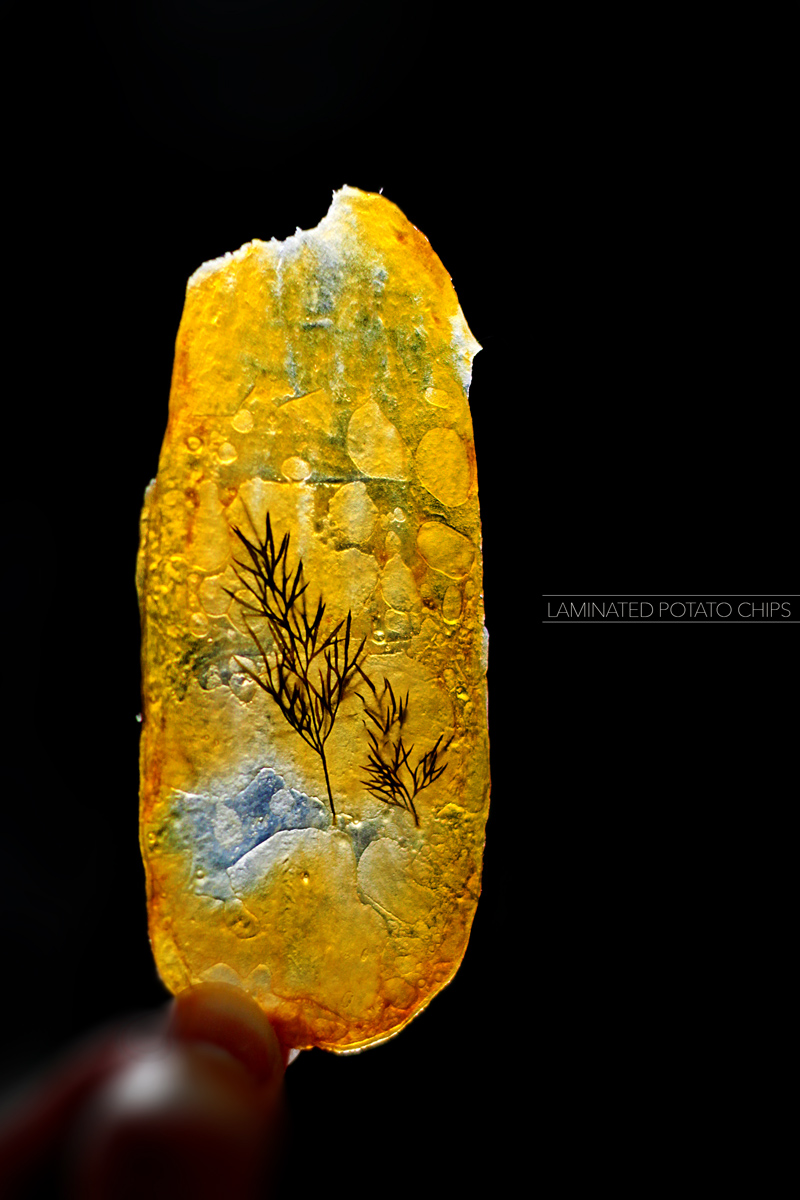 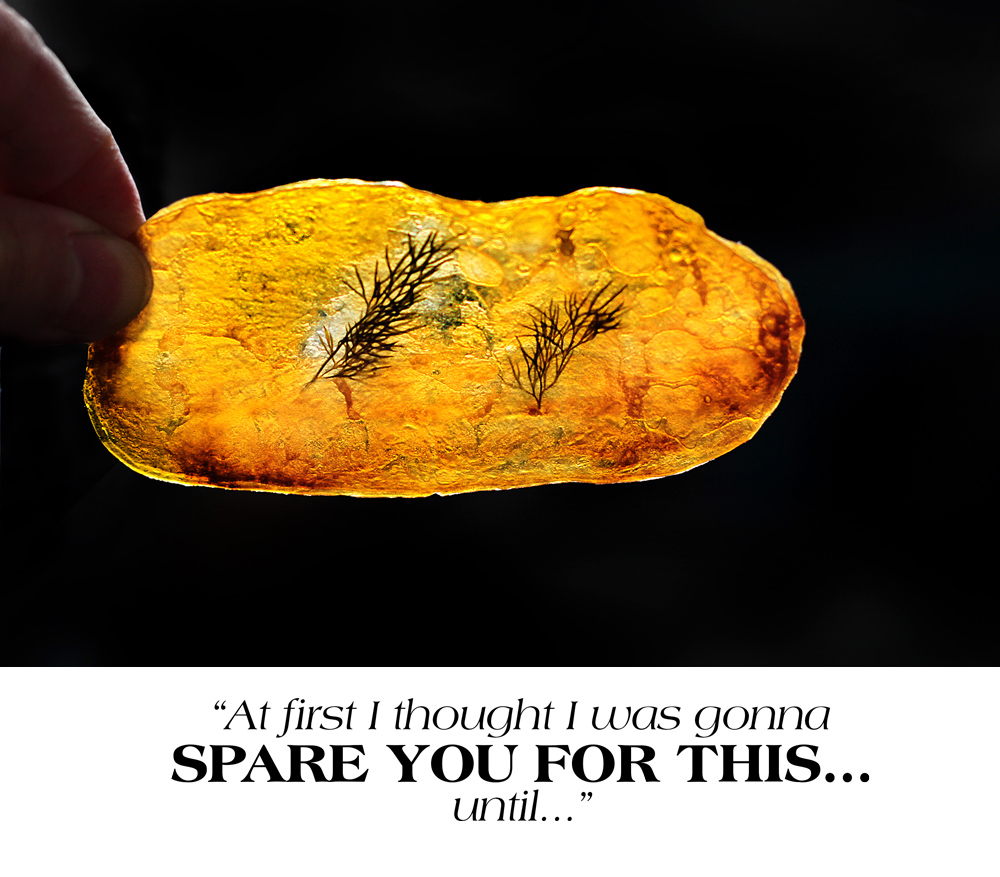 Yesterday, I spent a good deal of effort in the kitchen, not just on the usual manual labor I do driven by unknown impulses, but on trying to draw the very blurred line on practicality/doability when it comes to home-cooking, which I have slowly come to realize to having a very different definition than the general public.  Well, I suspect not having a day-job has something to do with it, but really though, what do people consider worth-the-effort when the grunt work is to be done by their own hands in their own kitchen? 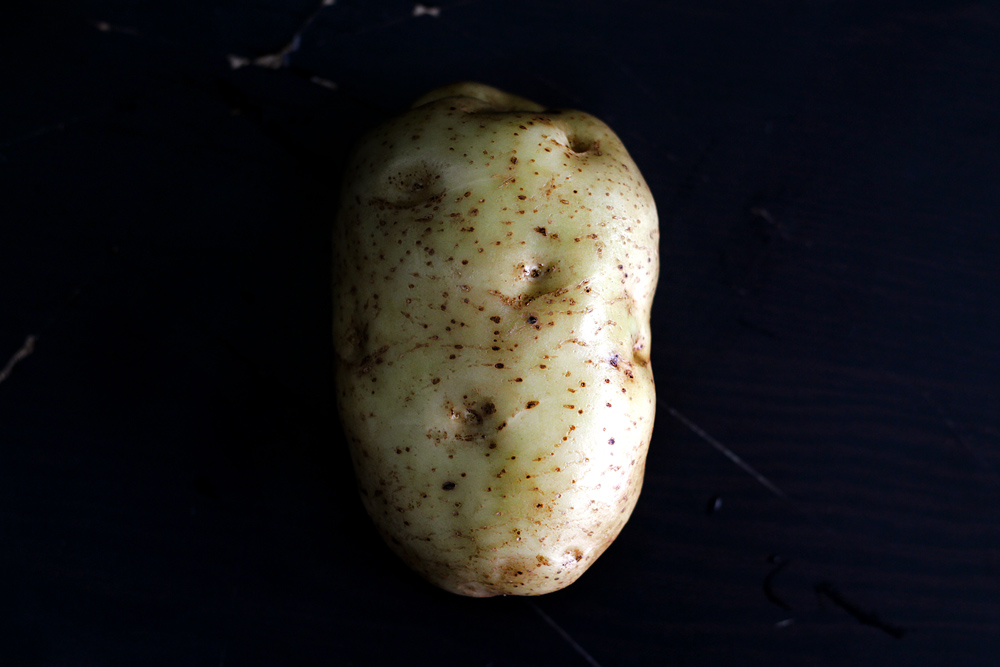 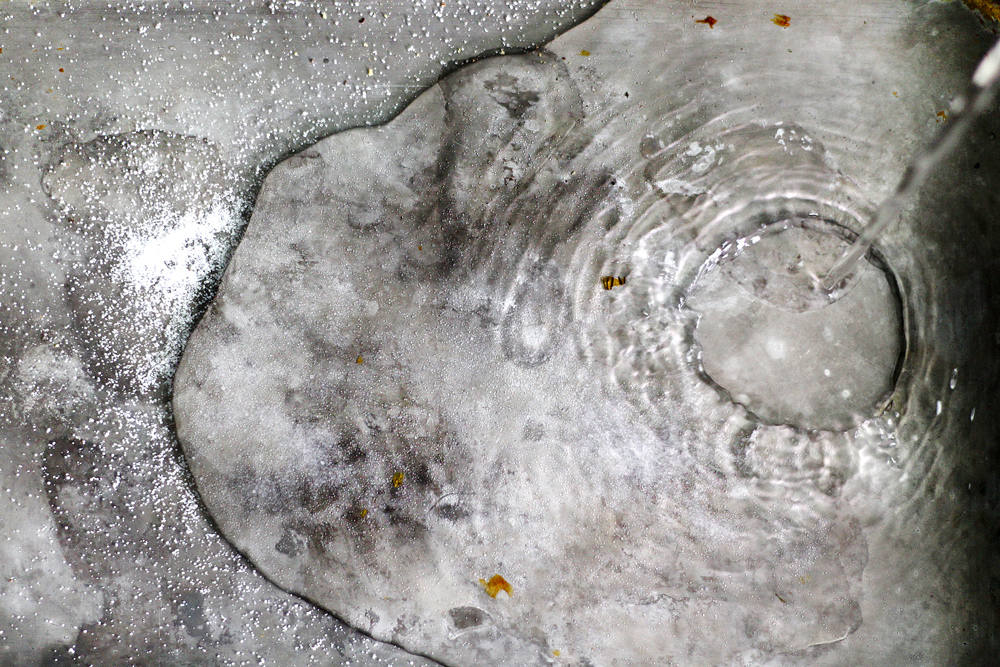 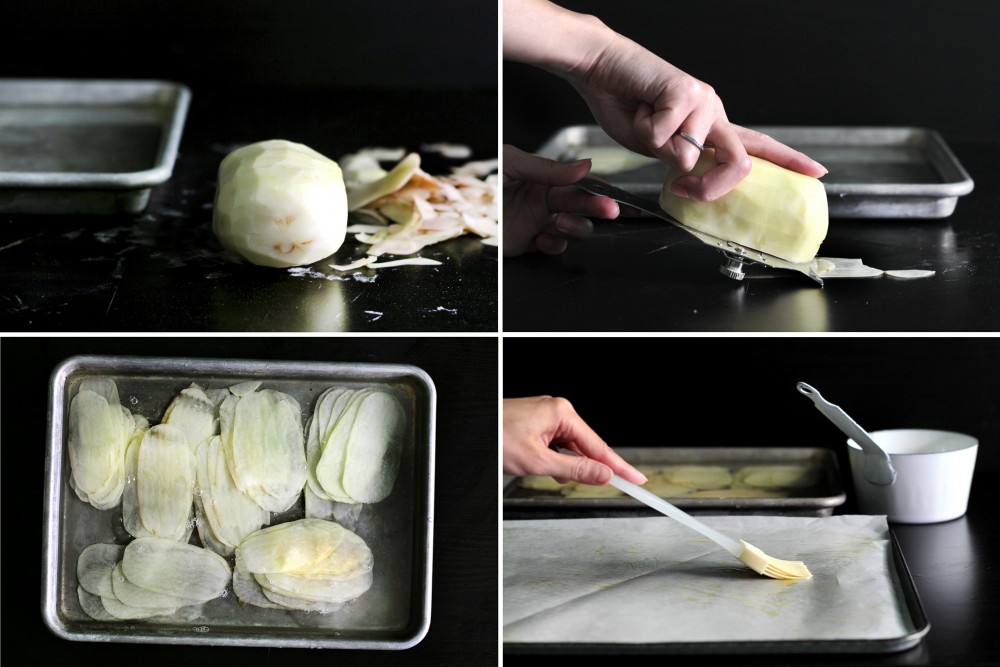 Since I have proclaimed to be an extremely biased and unrepresentative judge on such matters, you can understand my mental struggle while I was putting this together yesterday.  I mean, there’s a reason why the corner of this recipe in Thomas Keller’s French Laundry Cookbook has been folded for years without due until yesterday when I was struck by temporary insanity.  I thought, who else in their right state of mind would want to do this?  The same amount of time and effort spent on slicing potatoes super thin, laminating it with a sprig of herb then baked until golden brown and crispy, is only publicly accepted for things like pies, cakes and cookies.  Pfff~~ taters?  There’s racism in food-world, too.  I understand that.  So at first, throughout every step as I was putting this together, I thought, nevermind… I thought I was gonna spare you for this.  Until… 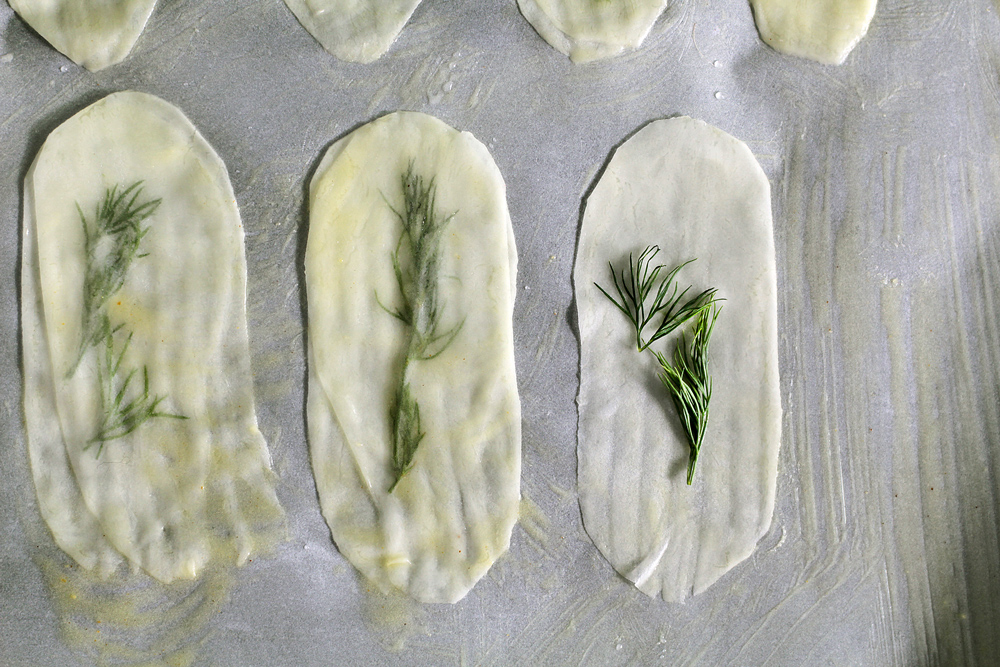 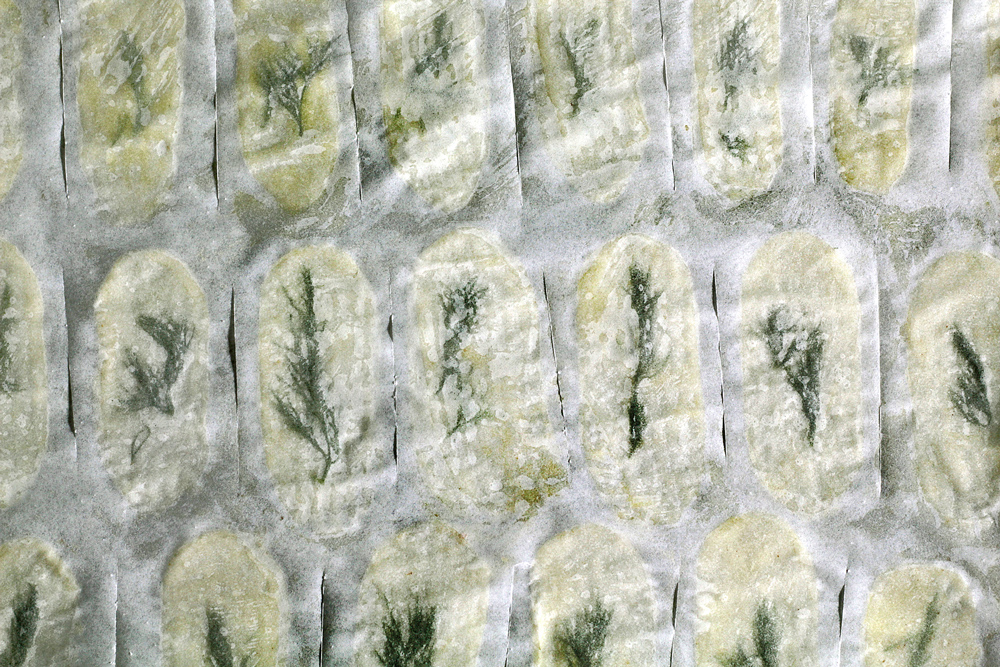 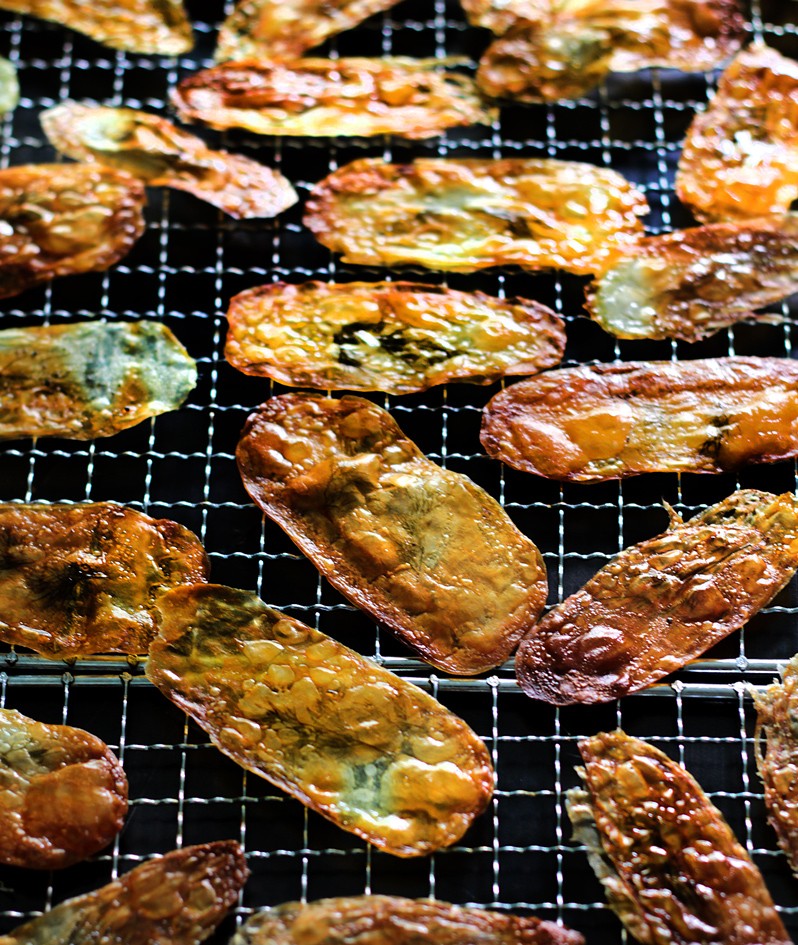 …until I picked up the first doubtful specimen, and the lace-like chip shattered in my first bite together with any uncertainty.  The brisk sound of crunchiness echoed in my head as an unmistakable confirmation.  Who am I kidding?  Forget what I said.  You have got to make this.  This being the thinnest, crispiest, and the most beautiful chips you’ll ever have, dwarfing any other sodium-and-factory-powder-loaded stuff you can buy, with no more than the amount of time you’ll need for some fancy cookies.  And they keep like the most solid promise in an air-tight container, as the few intentionally left from yesterday (not without effort) still crunches today like it’s nobody’s business.  With this convenient quality in mind, I would reasonably suggest you baking up a batch or more ahead for the coming Thursday/a.k.a your biggest culinary shown-down of the year, but…

Just don’t be surprised if your less-than-rock-hard self-control has other ideas in mind. 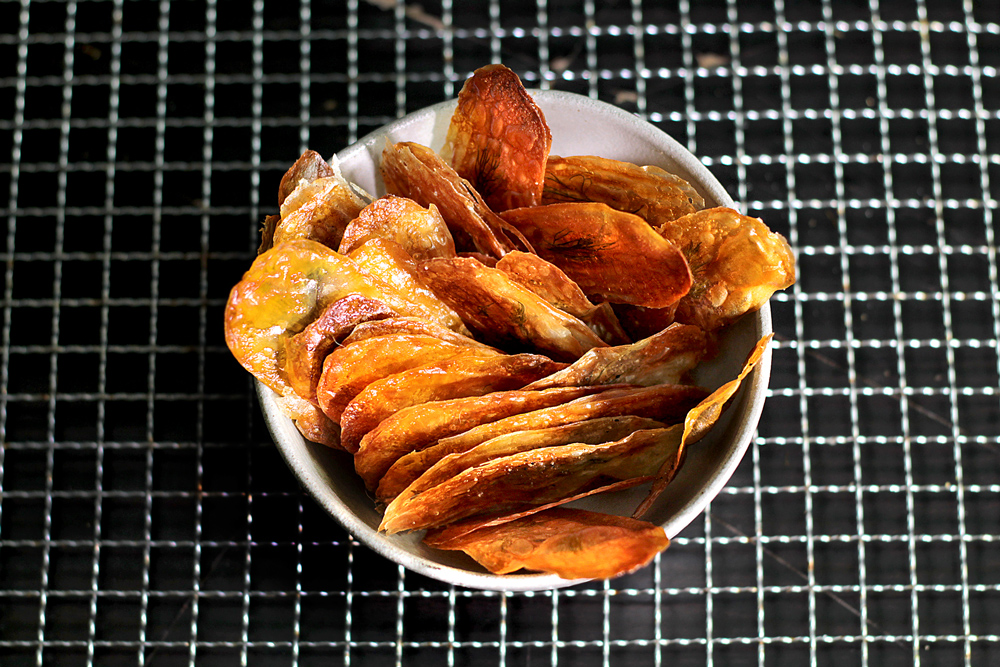 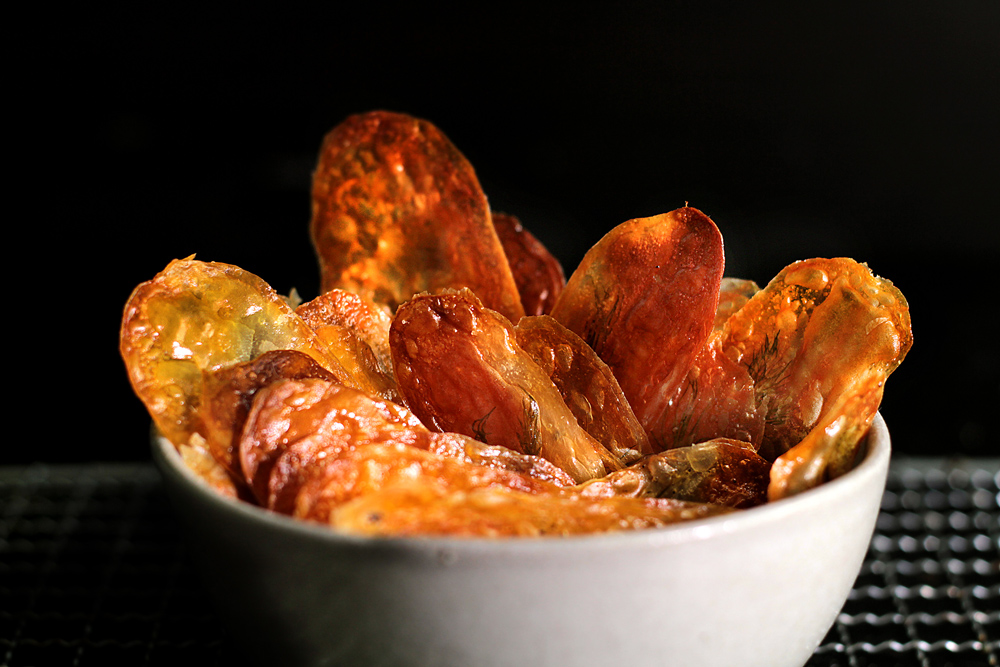 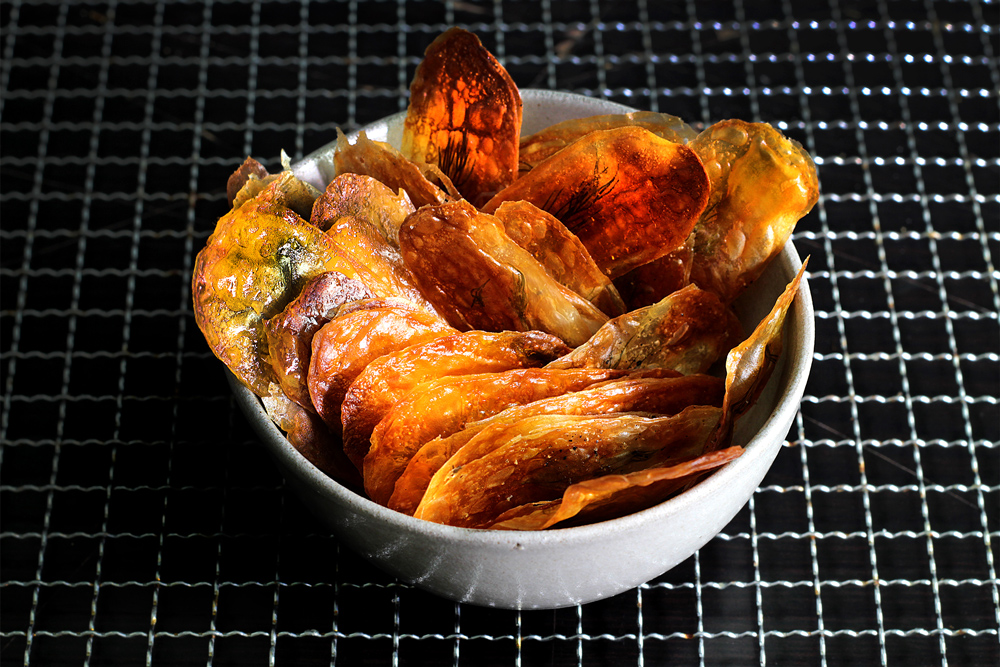 The success of the chips has EVERYTHING to do with how thin you slice the potatoes.  The slices have to be as thin as you can get them to be without breaking, thinner than typical potato chips (think of… a piece of parchment paper, or soft silk) because remember, we’re laminating two slices together.  A mandolin would be the ideal tool for this but i don’t own one, so instead I used a truffle shaver which worked fine.  Worst comes to worst, you can use a fruit peeler, which isn’t going to be able to create that kind of thinness and therefore the cooking-time may considerably increase.

Preheat the oven on 300ºF/150ºC, with the stacking baking-sheets that you’re going to use inside (preheating the sheets will shorten the cooking time).  Fill a shallow pan with a big pinch of salt and water, stir to let the salt dissolve.

After cleaning and peeling the potato, use the peeler to shape the potato into a relatively uniform shape, round ends with two straight edges (don’t have to be too precise).  Start slicing the potato, length-wise, into long oval slices that are thinner than typical potato chips (again, because we’re laminating two slices together).  Keep the slices in the correct order/sequence (so they’ll match in shape/size later), and every time you finish shaving a small stack, carefully move the stack into the salt-water pan to submerge.  Repeat until the whole potato is shaved.

Melt the unsalted butter in a small pot over medium-high heat until very slightly browned.  Set aside.  Wash whatever herbs you’re using and DRY THOROUGHLY with a clean kitchen towel.  Set aside.  Keep another clean, dry kitchen towel by the potato-slices for easy drying.

Lay a piece of parchment paper that’s the size of the baking-sheet you’re using on the counter, and brush very lightly with the melted butter.  Starting with the very first stack of potato-slices (usually smaller than the rest), lay one slice flat on the kitchen towel and gently press the other side of the towel on top to dab it dry.  Then lay the slice on top of the parchment paper, and place 1 small leaf of whatever herbs you’re using in the center.  Dab/dry another potato-slice and place it right on top of the other (they should match in shape/size).  Use your finger to gently push out as much air-pockets in between the slices as you can.  You should be able to see the herb clearly through the potato-slices.  Brush the top very lightly with melted butter (this is IMPORTANT as it will prevent oxidizing while you do the rest).  Repeat with the rest of the slices and leave about 1″ (2.5 cm) of space in between each.

Once you have filled the parchment paper, VERY VERY LIGHTLY salt the chips with fine sea salt and finely ground black pepper (remember, the slices were already submerging in salt-water).  Lay another piece of same-sized parchment paper on top and press gently to eliminate air.  Score a slit on the parchment paper in between each chips for steam to escape more easily, then place it on the preheated baking-sheet.  Press the other baking-sheet on top to keep it flat.  Bake in the oven for 20 ~ 25 min, rotating the sheet mid-way, until the chips are golden browned.  If the chips weren’t browned yet, remove the top sheet and bake for another 5 min.

You can keep assembling the chips while the first batch is baking.  Or, if your oven has excellent heat circulation and you have more than 1 set of baking-sheets, you can bake two batches at the same time.  Once the chips come out of the oven, season lightly with more finely ground black pepper and let cool on a cooling-rack.

Keep in an air-tight container for up to 2 days.