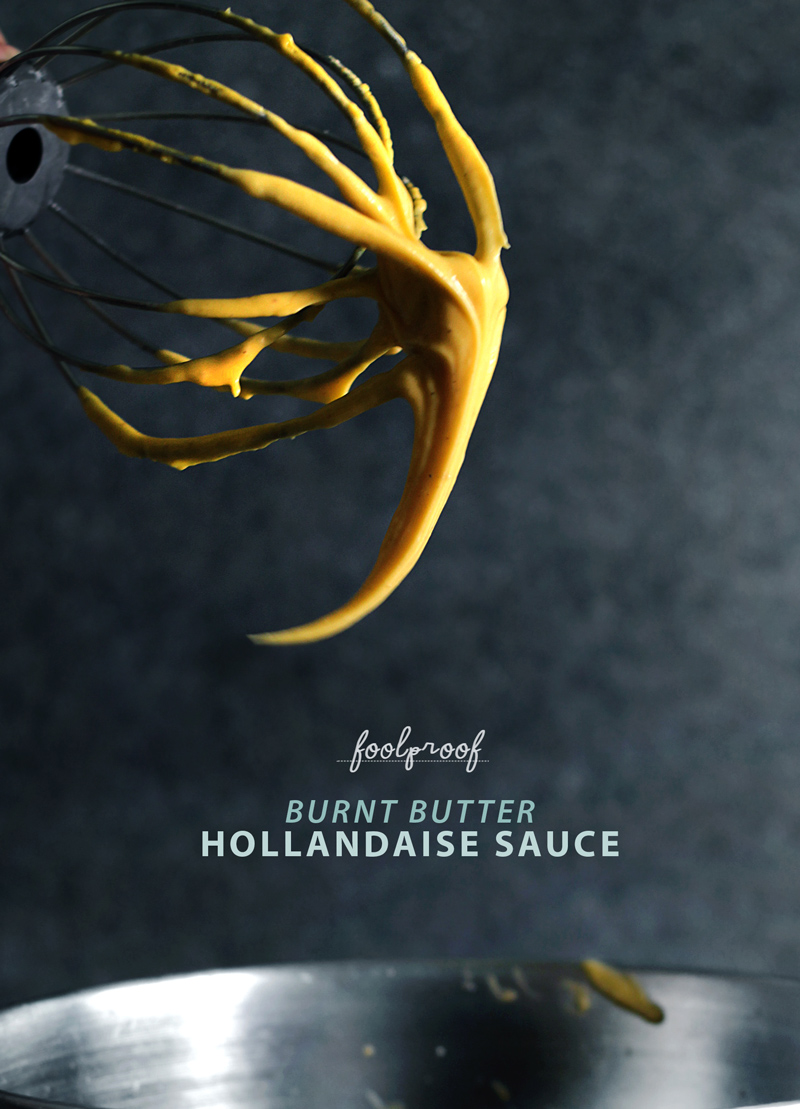 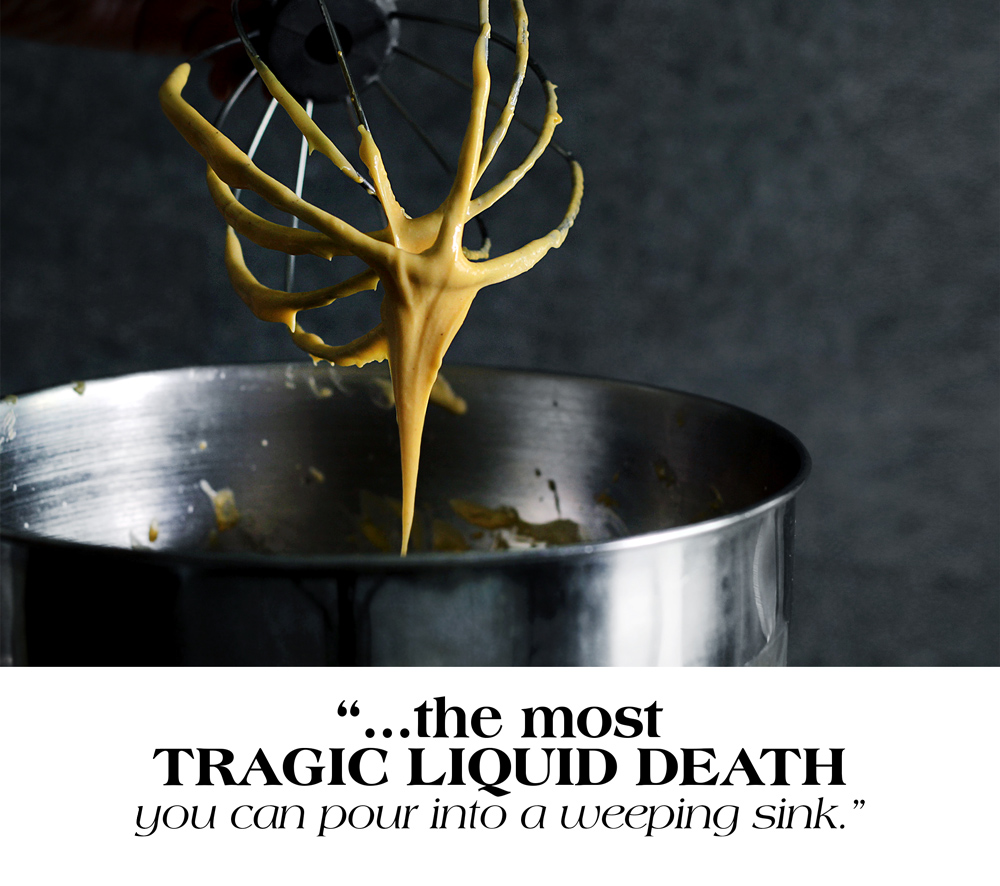 I’m sure it happens to everybody.  I know, self-assuringly, that I’m not alone on this…  I’m sure that once in a while, we all come across a recipe, a “trick” really, that gets us so excited we forget to reasonably doubt and then it fails on such an epic proportion that we quiver at the sight of the kitchen doorway for a week.  Say it is so.

Well… even so, two days ago, when my cold lingered on and my eyes were so dry from the medication that they were about to crack open, it just wasn’t… really wasn’t the best time for this to happen.

And yet it so did.  Three times it did. 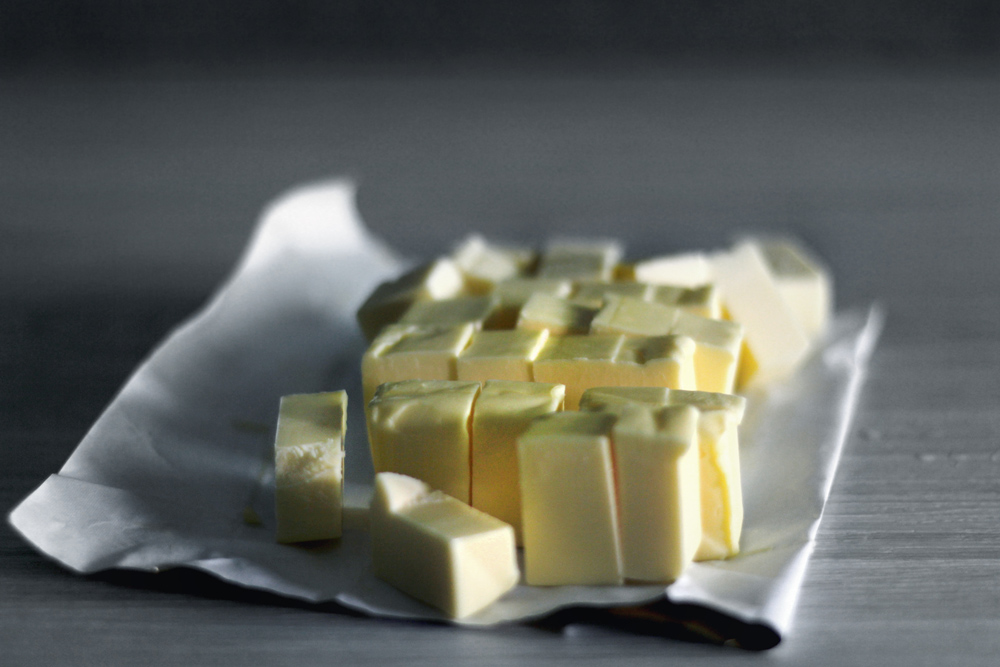 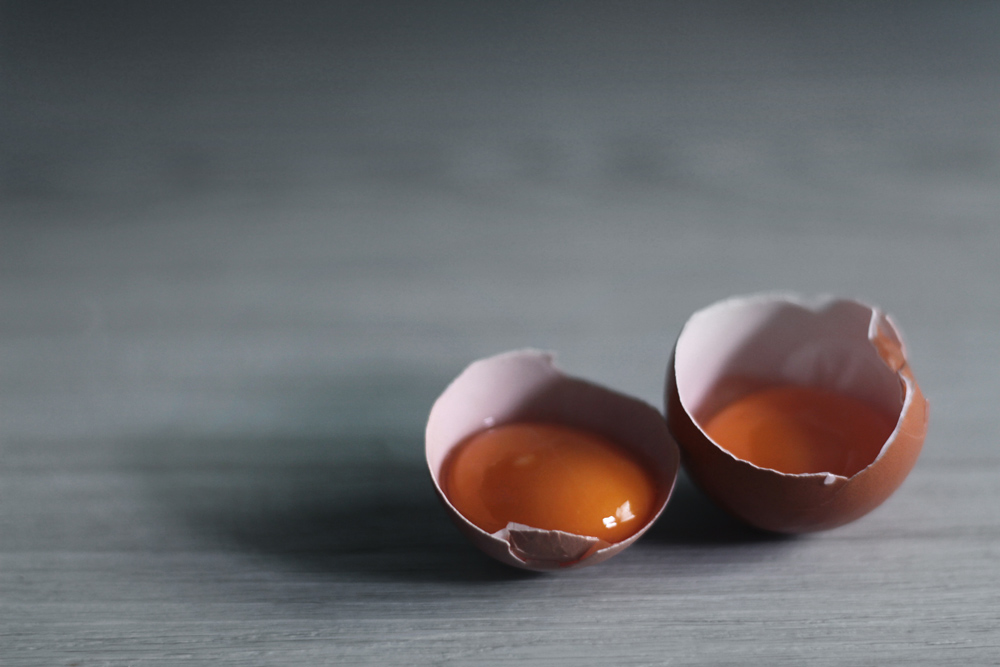 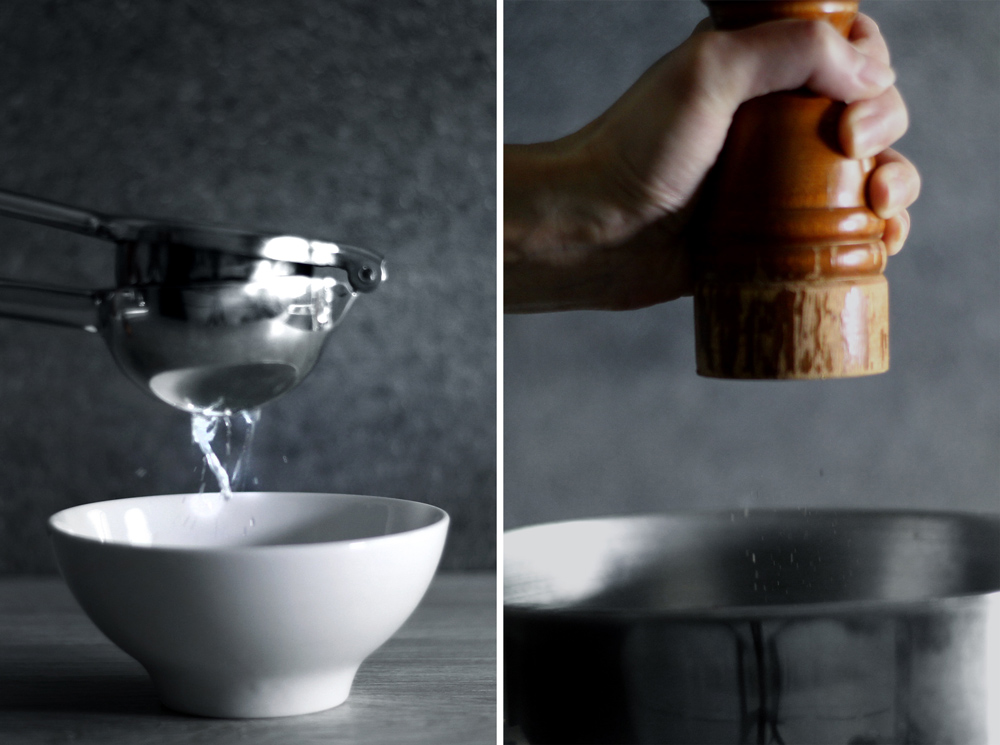 I love brunch.  I love brunch because the imagery of social vibrancy it paints, sun-dresses… side-walk seating… lively conversations, but no less than any of that, I love brunch because there will be hollandaise sauce.  A sauce that isn’t really a “sauce”, but a mayonnaise-equivalent in disguise that somehow feels more OK to be poured over my eggs… I dig that.  But strangely, for someone who isn’t unfamiliar with emulsified sauces, this and that, I’ve never attempted to make hollandaise.  Perhaps because the thought of a “double boiler” ignites the need for a nap and not motivation.  So the night before the incidence when I came across a, quote-unquote “Kick Ass Hollandaise” recipe using a blender, with the signature of Eric Ripert stamped on it, I was sold.  The idea of heating butter and let the hot, melted butter slowly cook and thicken the egg yolks in the blender, sounded logical enough, and I ushered it into production the next day.

I melted the butter, browned it even to nutty goodness.  I thought, I got this.  I thought it was going to come together beautifully like all my butter sauces had.  It didn’t.  It broke, irreversibly, along with my most sentimental heart. 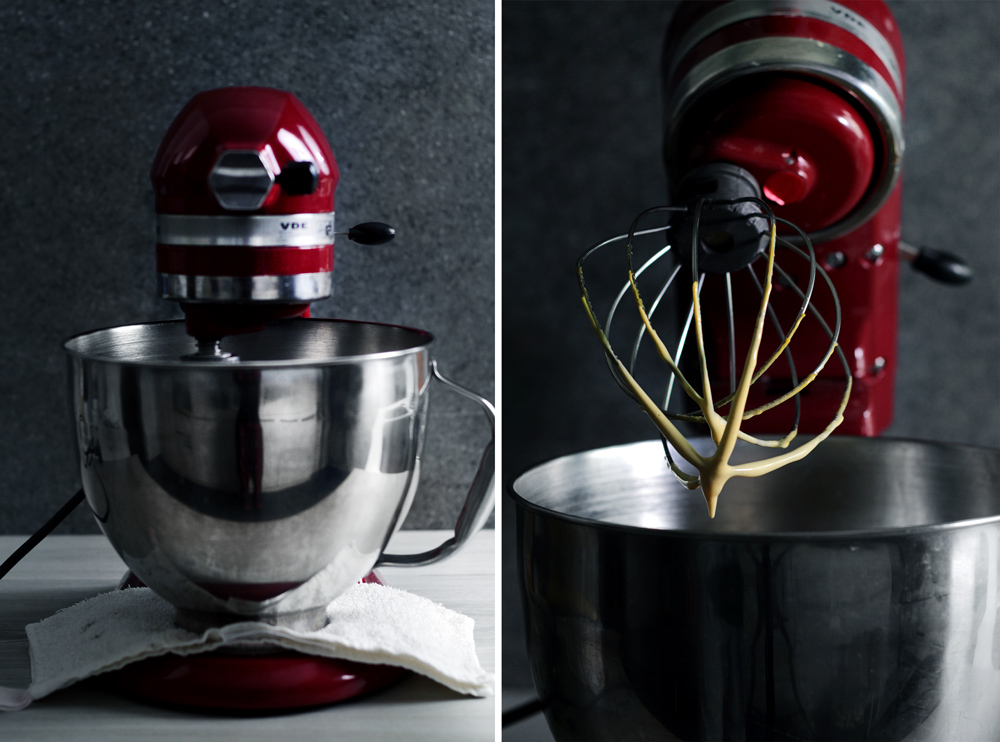 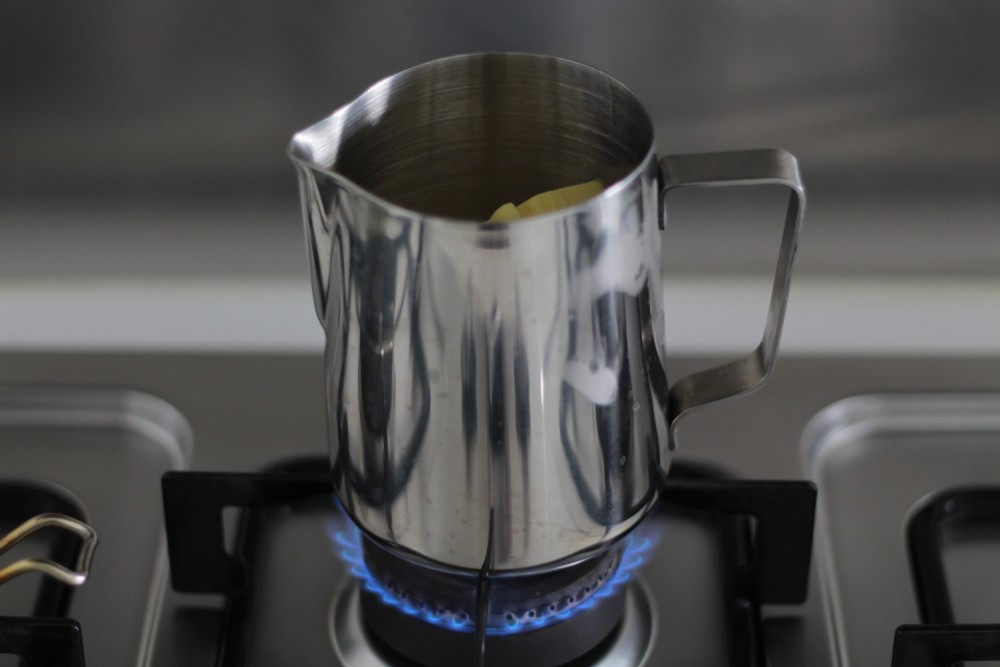 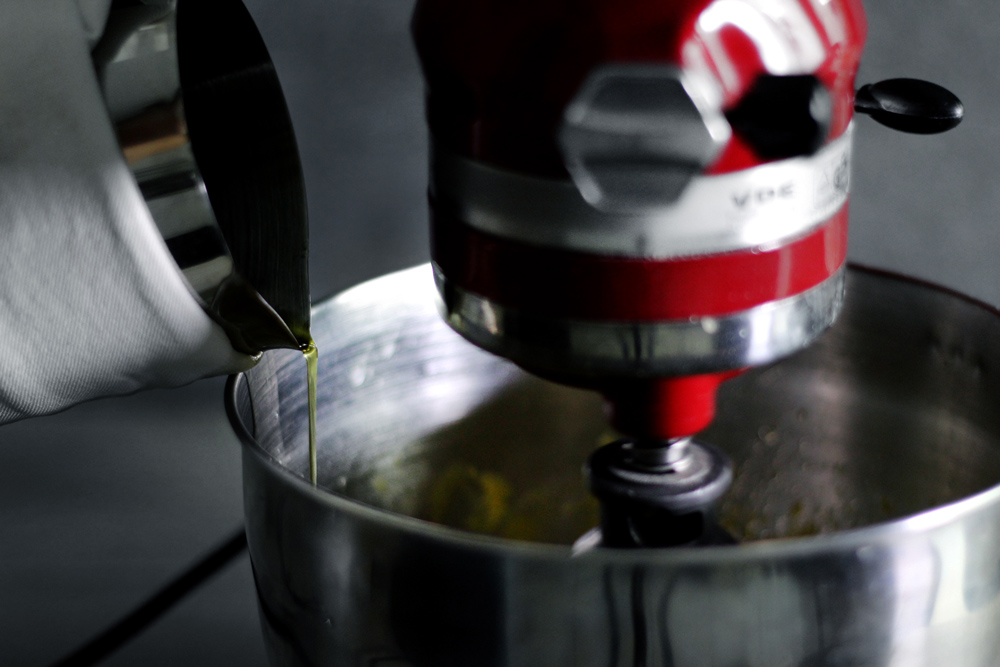 What… the fuck?  I stood there staring at the fluid-splattered crime scene and was stunned by the coagulating presence for a frozen three minutes.  The blunt and unconcealed puddle of failure struck my core.  Me…!  Me who once, on her first try without prior experience, made bearnaise sauce on the stove, over DIRECT heat.  DIRECT HEAT!  Me, who once stared into the face of mocking Provençals with defiance (mentally at least) and made perfectly creamy aioli in nothing but a stone mortar.  STONE MORTAR!  I was so sure… I got this.  There are people who once said that butter sauces smell fear…  But no.  No they don’t.  They smell audacity… arrogance… one slight loss of modesty and it will break itself, and you with it, in the most tragic liquid death you can pour into a weeping sink…

To add to my tragedy and your entertainment, I regrouped to try again.  Twice more.  And still no hollandaise sauce…  I’ve never butchered so much butter within such a short time-frame with nothing to eat at the end of it… it felt like the filth of guilt.  I later forced myself back into the kitchen to make dinner… just to punish myself!  It didn’t taste like redemption either. 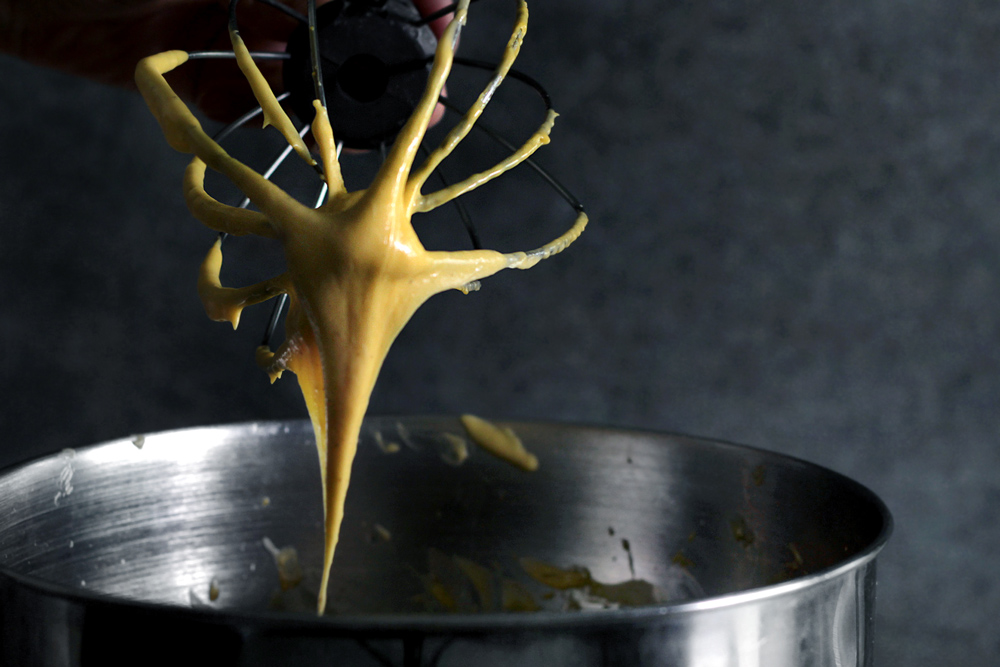 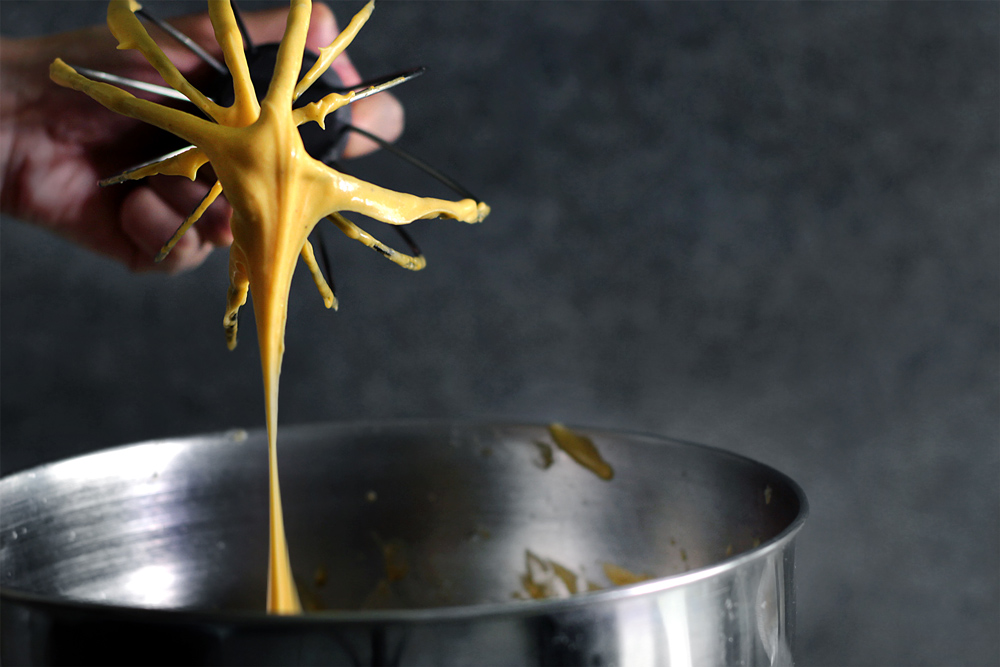 The rest of the day, I spent it in a fetal position sucking my thumb, mentally examining my failure CSI-style.  I first blamed Eric.  What a fucking liar.  This is why recipes have to be long, explicitly, in details!  Kick-ass hollandaise?  Yeah, the only ass it kicked was my ass.  And blender?!  BLENDER?!!  Maybe he forgot to ask “Are you making hollandaise for 20 people like in my fabulous restaurant?”, well then, NO, NO I wasn’t!  Because he should’ve mentioned what a blender does if you feed it with only a VERY SMALL amount of liquid.  It SPLATTERS!  The spinning blade splashes the egg yolks so violently everywhere in 360º, the mixture was more likely to end up on the ceiling than the bottom of the blender to duly emulsify with the added butter.

If there’s one piece of machine to help us pull this off, this being the nuttiest and most intense BROWNED/BURNT BUTTER HOLLANDAISE you’ll ever taste, it shouldn’t be a fucking blender.  It should be, a stand-mixer!  A piece of equipment that provides high friction but at the same time, keeping it relatively in one place.  A piece of equipment that doesn’t only do the sauce, but also inherently KEEPING it inside a heat-proof bowl that will stay warm, without any left-behind sauce that goes to waste (hello~ blender?!).  A piece of equipment that gave me the most glorious and delicious redemption the next day, one try, and saved my will to ever cook again.

I tell you it is so. 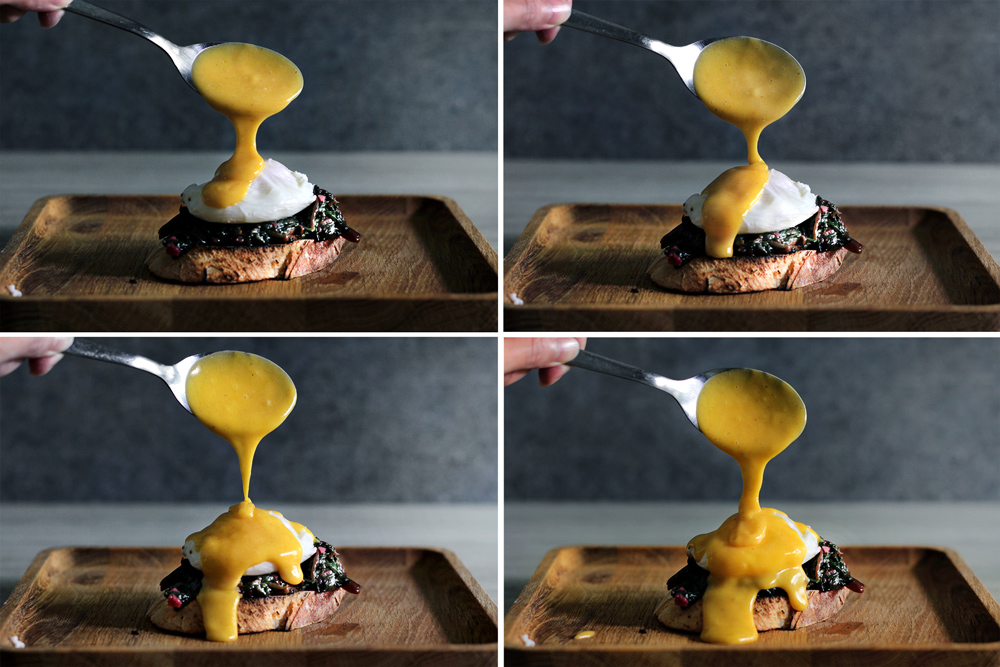 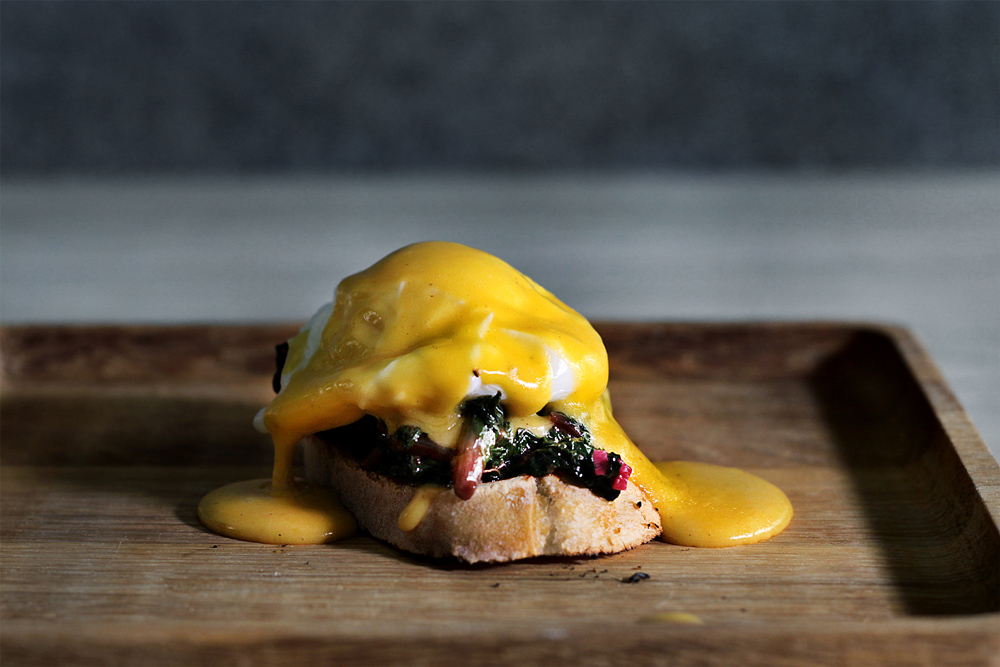 Unlike many recipes that suggest mixing unmelted, cubed butter into the egg yolks over gentle heat which I admit is easier and more “foolproof”, this sauce requires using butter that’s browned/borderline-burnt and therefore in liquid form.  The risk is higher but it gives an ENTIRELY different dimension of flavour and aroma to the hollandaise that I promise, is worth the trouble.  But since all the moisture in the butter that’s crucial for establishing an emulsification, has all evaporated during the browning, we need to re-introduce it back into the recipe, and that is where the whole milk comes in.   Keep more than 1 tbsp of hot whole milk on the side for fixing a broken hollandaise sauce if it happens (Apparently Downton Abbey says “It’s easier to fix a hollandaise sauce than a broken heart”…. as later I was told by Google.  Great.  Just great).

Place the egg yolks, salt and ground white pepper in the stand-mixer.  Heat 2 tbsp of whole milk in the microwave on high for 20 seconds, or until it starts to boil (best to use a clear glass for this so you can see).  Turn the mixer on high and slowly poor in the hot milk.  Once incorporated, keep mixing on high for 5 ~ 6 minutes until the mixture is thick and creamy, almost doubled in size.

Meanwhile, place the cubed unsalted butter in a pot that allows easy pouring (a stainless-steel milk pitcher works wonderfully).  If you don’t have such things, you can brown the butter in the pot and feed it to the mixer with a spoon.  Set the pot over medium-heat and cook.  The butter will melt, then starts to foam and bubble, which will then eventually subside in 5 ~ 6 minutes.  Once the sizzling and bubbling starts to die down, it mean the butter is starting to brown and specks of browned bits will start to settle on the bottom of the pot.  Watch closely and let butter brown even further then how you would normally do.  The butter will smell extremely nutty and fragrant.

The browned/burnt butter is now ready.  If your pot/milk pitcher doesn’t pour cleanly (that the liquid runs down on the side of the pot/pitcher), wrap a kitchen towel around it when you pour.  Mix 2 tsp of lemon juice into the egg yolk mixture, then with the mixer mixing on the highest speed, start drizzling the butter into the mixer-bowl.  SLOWLY, and I mean DROP BY DROP in the beginning.  You can increase the drizzling amount mid-way through, when a definite emulsification has established in the mixer, but stop drizzling for a few seconds if you see liquid butter still trying to work itself into the egg yolks.  The mixture will start to thicken up considerably.  It should take you no less than 6 ~ 7 minutes to incorporate all the butter.

If, God forbid… the sauce starts to break (you’ll see liquid butter separating from yolk-solids), mix in 1 tbsp of warm milk and it should supposedly come back together.

Once all the butter is incorporated, check the consistency of the sauce.  If it’s too thick to your liking, add more warm/hot milk to loosen.

To keep the sauce warm (and it HAS TO stay that way because once butter cools, it will solidify), bring a small pot of water to simmer then TURN OFF the heat completely.  Let the mixer-bowl sit on top of the pot, WITHOUT THE BOTTOM touching the hot water.  Give it a whisk once every few minutes.

You can also keep the hollandaise in the fridge, which it will then solidify.  To bring it back to life, heal 1 tbsp of whole milk over low heat until it starts to simmer.  Remove the pot away from heat and use a whisk to slowly incorporate the cold hollandaise, 1 ~ 2 tbsp at a time, into the milk.  Only apply more heat to the pot if the sauce refuses to melt, until all the hollandaise is whisked into the milk.  If the sauce breaks, take it off heat and add more COLD milk and whisk vigorously.  It should do the trick. 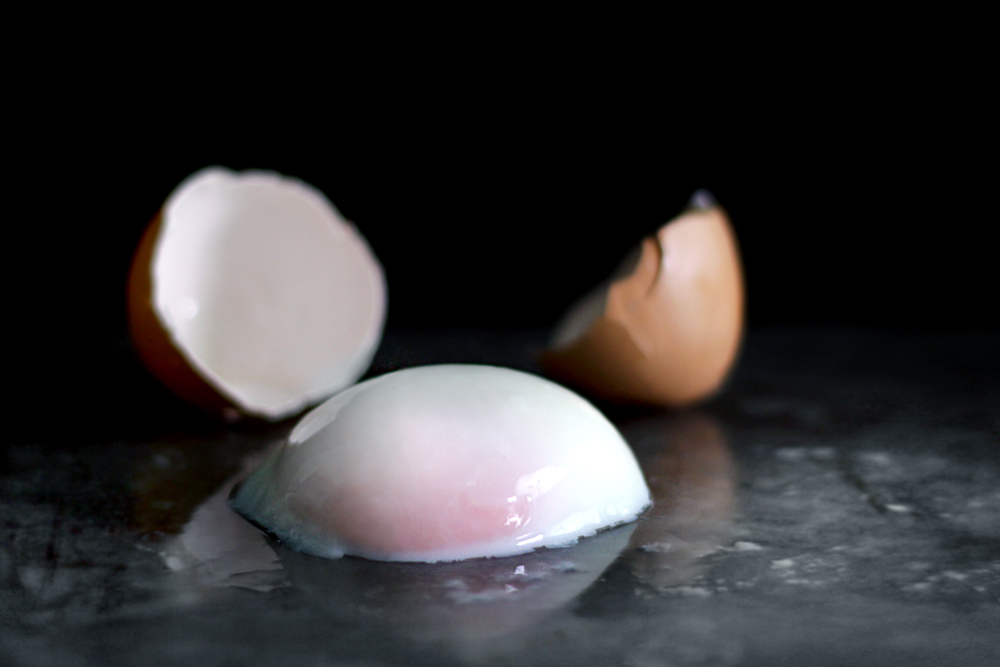 If you don’t want to poach eggs under pressure when you are hosting a brunch party, you can make these beautifully soft-poached onsen eggs the day before.  Keep them in the fridge and 10 minutes before serving, warm them up in hot water (NO HOTTER THAN 158F/70C).  An alternative, thermal water-bottle method here.

Once the timer goes off, immediately transfer all the eggs into COLD water until COMPLETELY COOLED DOWN.  You can refrigerate the eggs until needed, and bring it back to warm-temperature by submerging it in hot tap-water for a few minutes.