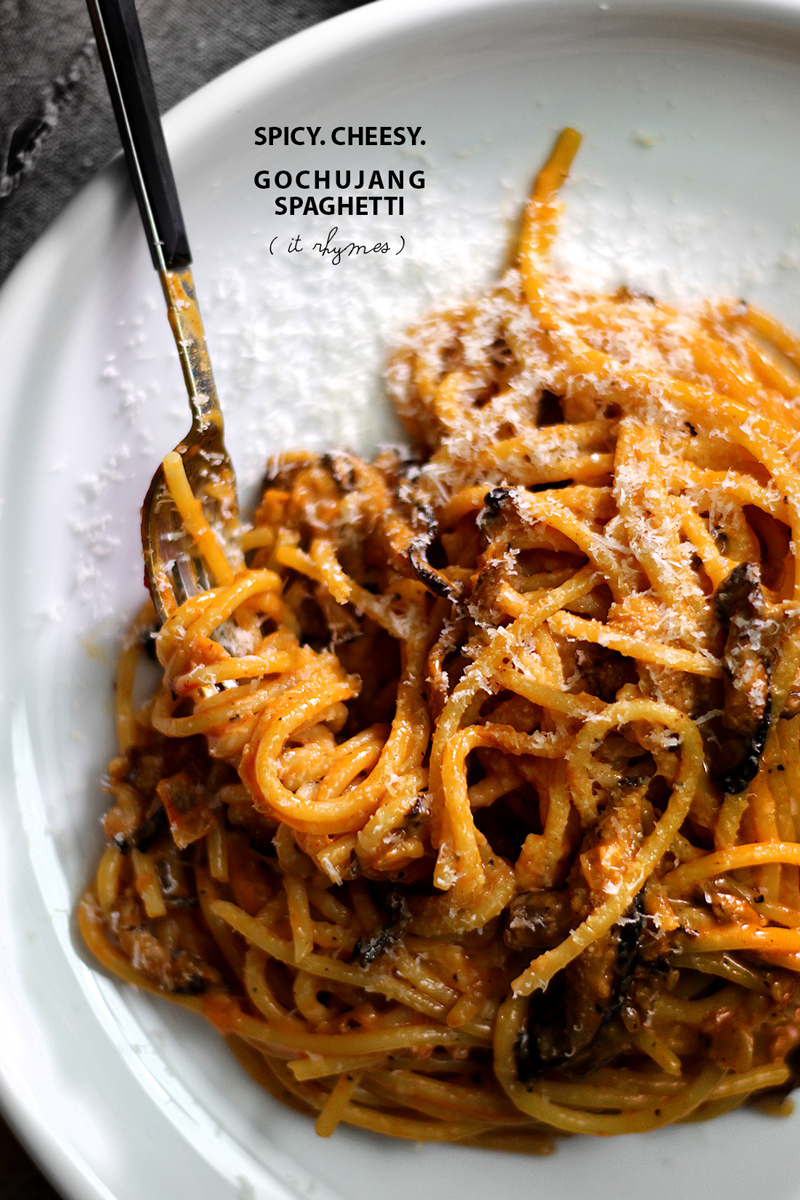 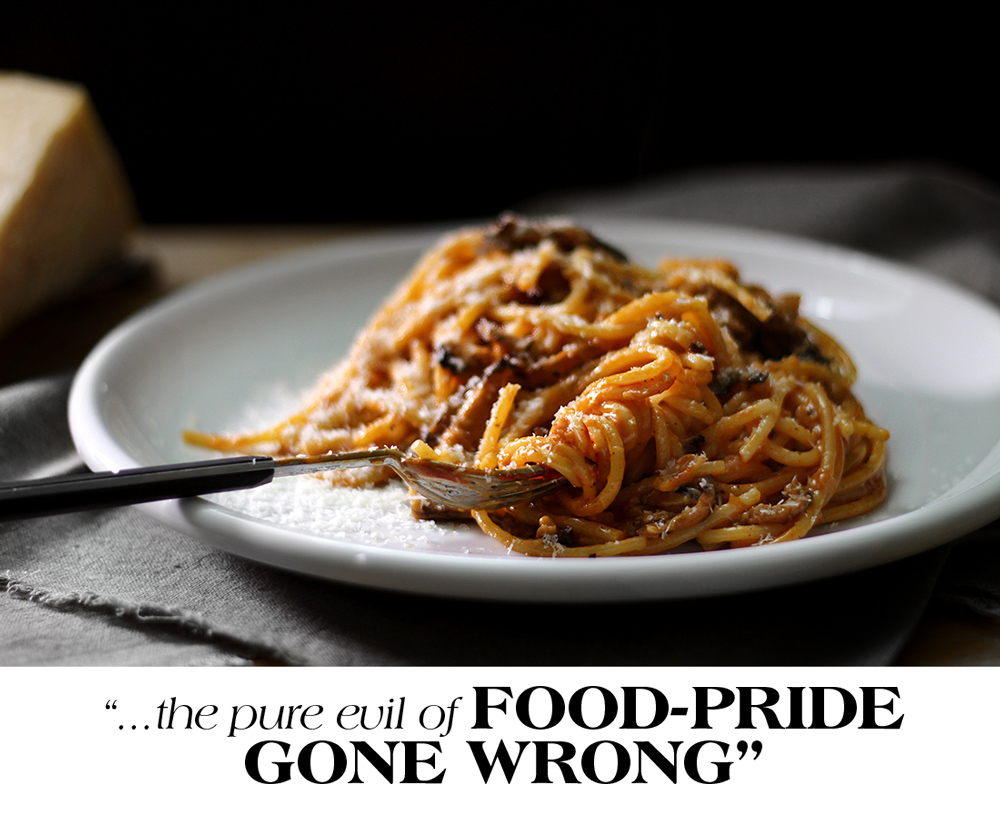 The wee-light of early morning started seeping in through the curtain, adding to my sense of unease particular to someone who knew she had done wrong and was most certainly about to get caught.  Jason’s morning-siren promptly started barking at 6:30 (no, really, the alarm is a dog barking…) and was ignored for 5 minutes as usual until eventually, he turned over and witnessed my crime scene.  Like the most gasping moment in a horror movie, an unsightly picture of an irresponsible grown-up, holding her i-pad with an earphone giggling like an idiot, secretly pulling a marathon on… a new-found television series.  ALL NIGHT and 18 episodes in, not even of something socially excusable like Game of Thrones, or House of Cards to demonstrate depth, but a retarded high-school version of True Blood with a name too embarrassing to even pronounce… Va…Vampire Diaries!  God!  Just hang me by the neck! 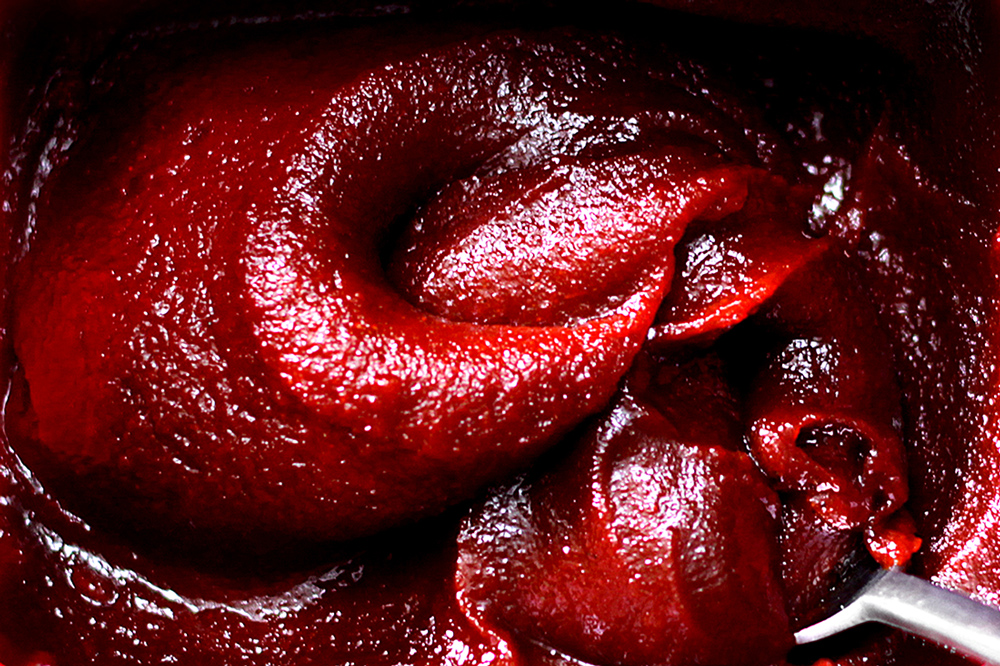 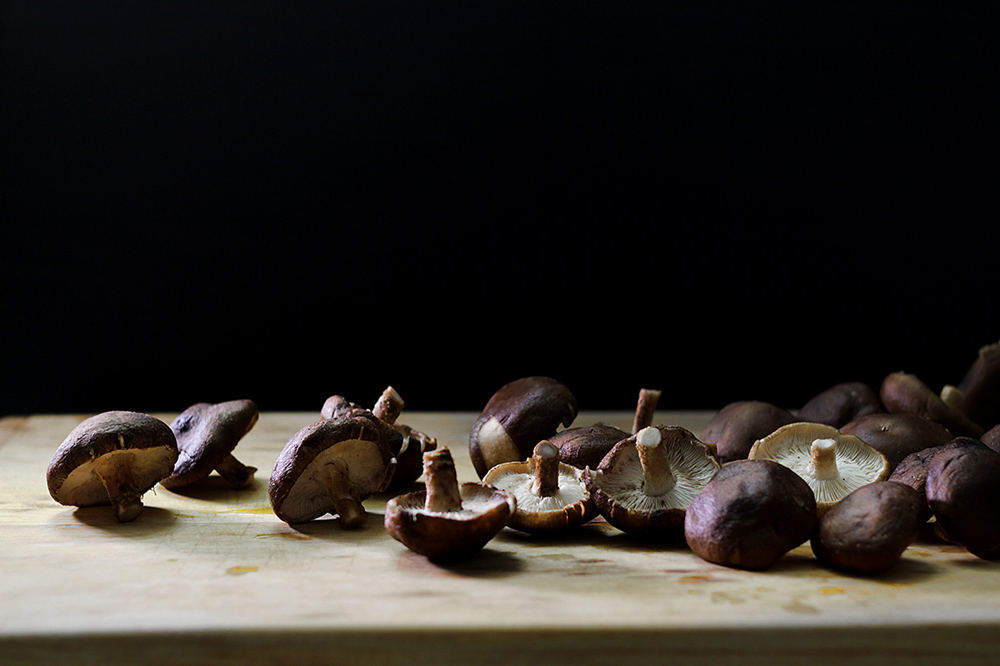 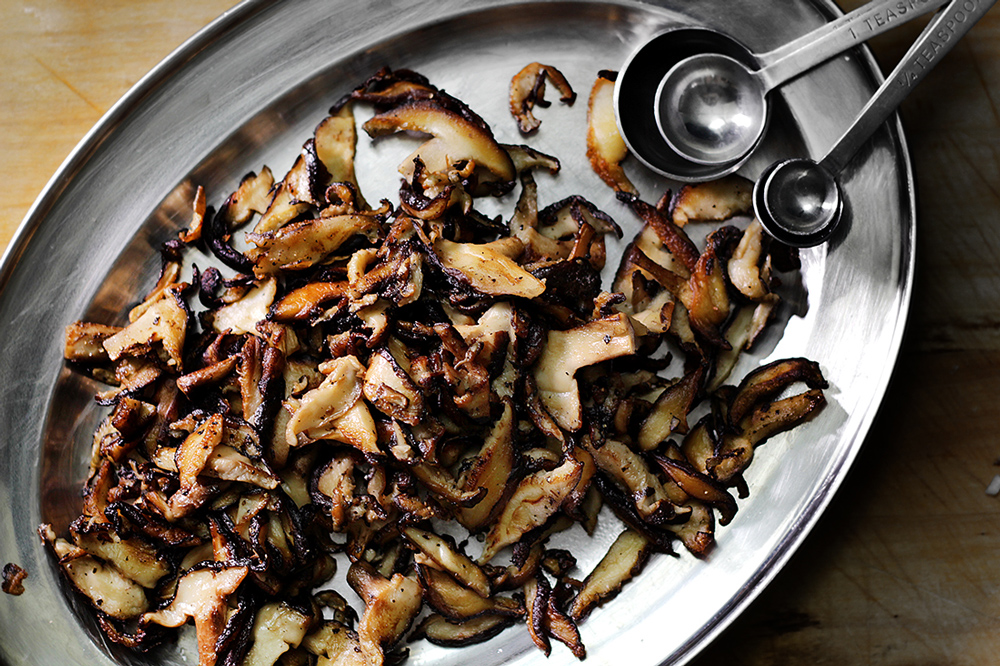 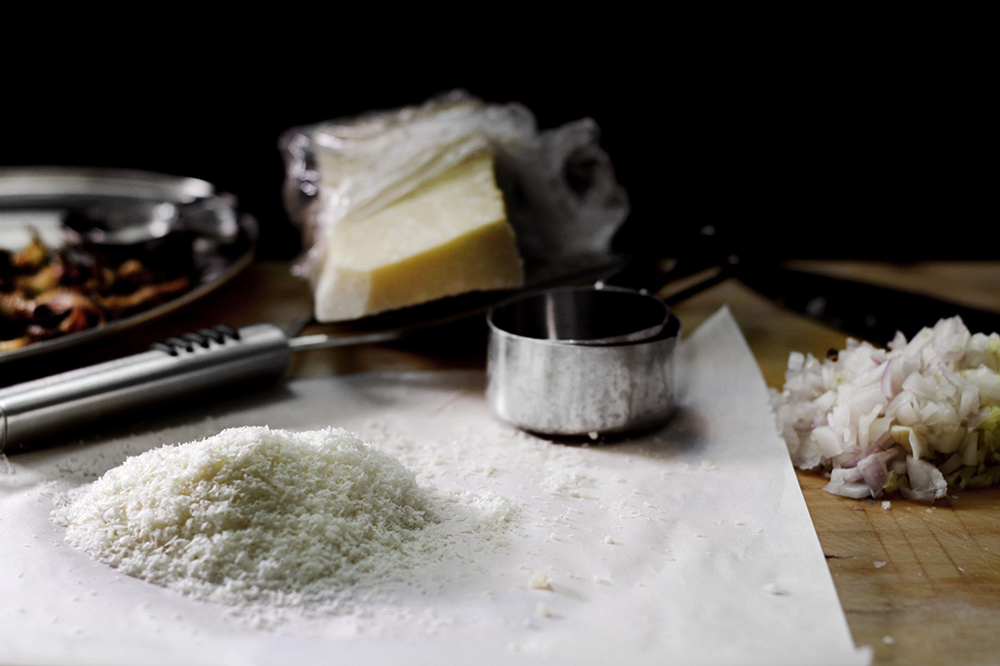 But to calm you down from the horror that this post has something to do with idiocy and to prove that I’m not at all lost in senses, I’m glad to inform that somewhere along Season Two (or fine, much earlier than that), things had just taken a deep dive from DUMB to DUMBER, which pulled my conscientiousness back to reality.  A)  Vampires are not real and B)  Oh wait I have a food-blog to maintain!  Right, food.  FOOD!  My mind was so scrambled I can’t even remember what the fuck I ate until I pulled out my drafts in cue… uhmm, what the hell is this mutated monstrosity no amount of garlic can expel?   A pasta dish so obscene that it’ll turn an Italian grandmama in her grave for sure, and I say this with proof based on my evidently knowledgeable choices on TV-shows.  Predating my sickness on the less nutritious vampire-run, I was enjoying a much more substantial one focused on regional Italian cuisine called Two Greedy Italians (smooth transitioning I  know).  In spite of the many Godly perks and blessings of being an Italian when it comes to food, the show also revealed the pure evil of food-pride gone wrong… 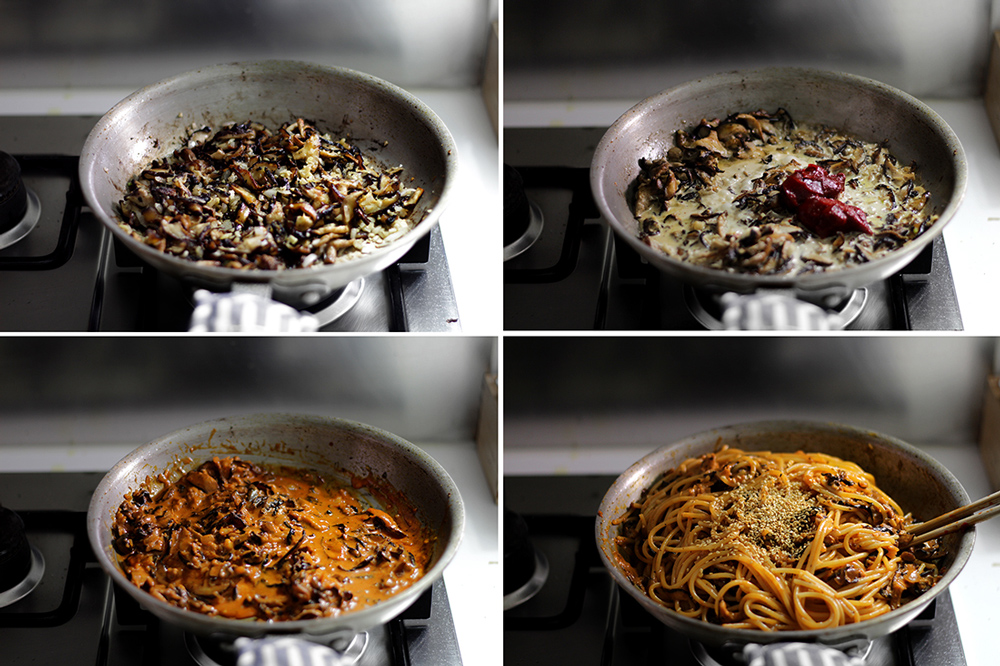 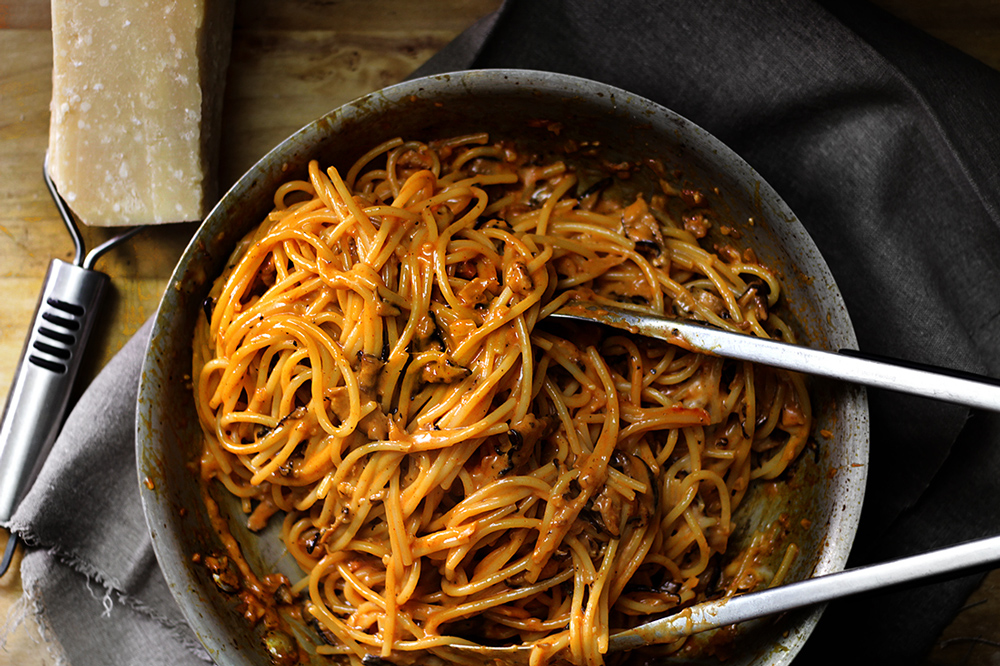 … About regions in Italy that are boycotting foreign produce, restaurants and food stores in the fear that it will interfere with their own food culture.  Now see.  This, along with the fact that I watched a show called The Vampire Diaries, just down-right pisses me off.  I have no objection with people exercising a healthy pride on the tradition and authenticity of their cultural cuisine, but that has to come with KNOWING that EVERY INDIVIDUAL divisions in foods that exist nowadays is the merging of many, as a still on-going progression in human history.  Tomatoes and pasta had no business with Italy a long time ago, and to argue more recently, the uniqueness of Taiwanese street-foods that we so proudly identify with, would come entirely different if weren’t for the Japanese colonization that ended in 1945.  If we all just stick to “traditions” and “authenticity”, we’d all be still teething on raw meats and tree barks.  Taste like shit not to mention boring.  So don’t be a mono-diet vampire, sometimes you just might end up with the best cheesy pasta you’ve had in months. 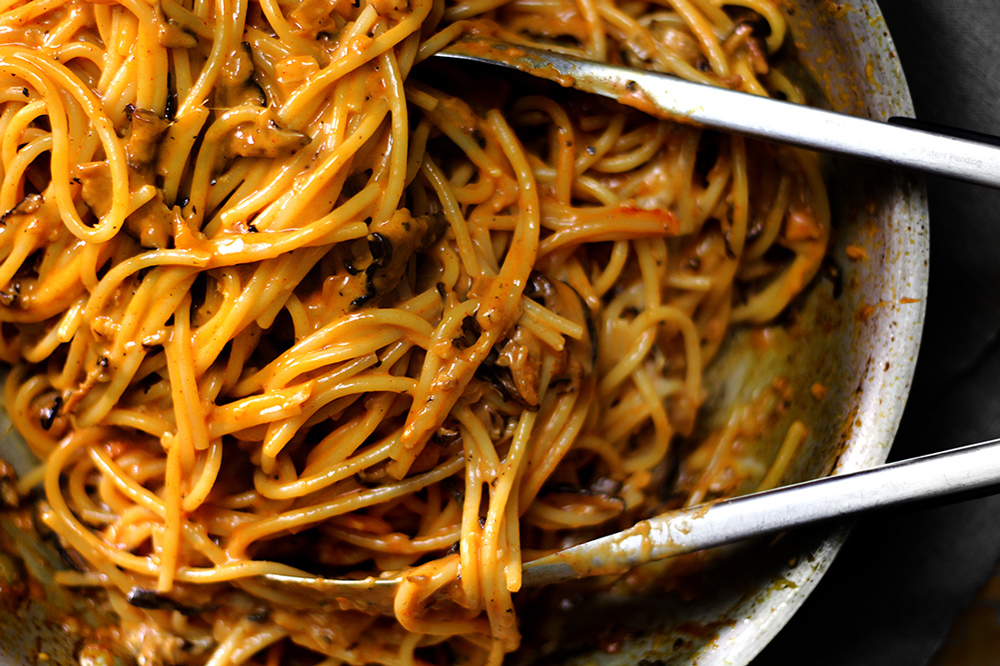 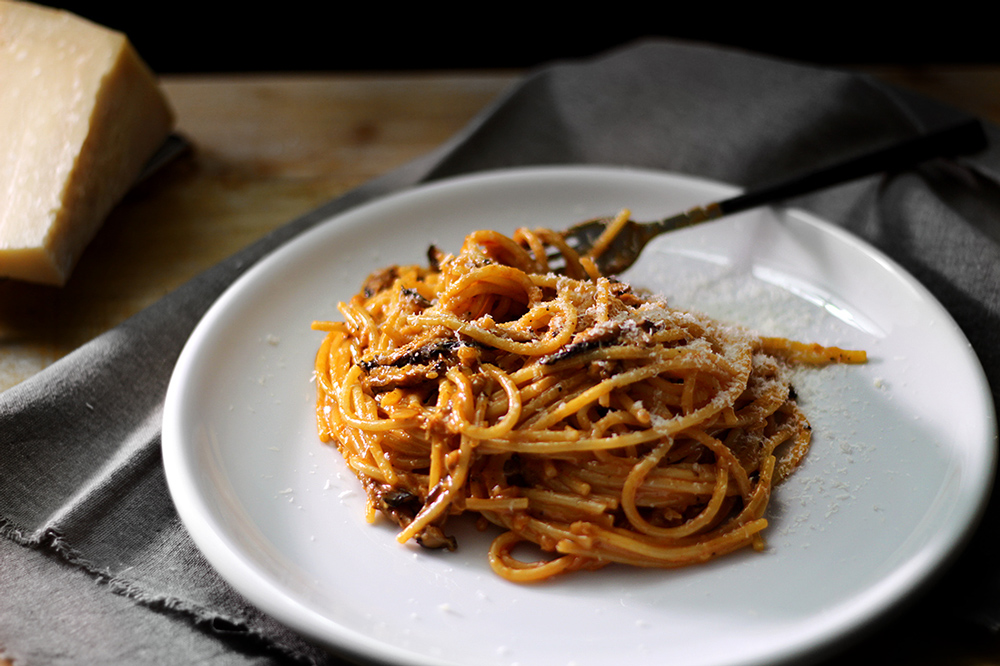 This dish is built on the premise that Korean gochujang (chili paste) goes splendidly, against all odds, with cheese.  I went safely with cheddar cheese but you can go with anything melty like gruyere, gouda or fontina.  The first time I made this without ground pork, but I did the second time and proved a little pork never hurts anybody.  You can of course use sausage meat instead or even ground beef, whatever you have on hand.  But of course without it, this makes a great vegetarian dish nonetheless.  As far as mushroom goes, I used shitake exclusively, but common variety like oyster/porcini/crimini/chanterelle would all work great.  Just don’t do white button mushroom, they’re flavorless.

Clean and remove the tough ends of whatever mushrooms you are using, and thinly slice them.  Heat up a large skillet over high-heat and add 2 tbsp of olive oil.  When the skillet is REALLY hot, add 1/2 of the sliced mushrooms and scatter them without overlapping too much (depending on the size of your skillet, you may have to do this in 3 batches instead of 2).  THEN DO NOT MOVE THEM, or SALT THEM at this point.  Let the mushrooms toast in the skillet for a couple of minutes to get a very nice browning, then turn them only to get browning on as much surface area as possible.  Crowding the skillet/moving them too much/salting them too early, will all result in the mushrooms sweating too much (releasing water), and you won’t be able to get that deep toasty edges that completely transform the mushrooms in flavours.  Trust me, you want that.  Once the mushrooms are nicely and evenly browned (they should have reduced in size considerably as well), season them with salt and freshly ground black pepper and remove from the skillet.  Repeat the steps (adding more oil to the skillet) with the rest of the mushrooms.  Then set aside.

Bring a large pot of water to boil with a large, hefty pinch of salt.  Cook the spaghetti according to instruction.

Meanwhile, in the same skillet, add a little bit more oil and start browning the pork.  Add onion, garlic, salt and black pepper, and saute until the onion is translucent.  Add tomato paste, gochujang paste and flour, and cook for another couple of minutes, then add the milk.  Cook until the milk starts to simmer and thicken slightly.  Stir in the mushrooms, cheddar cheese and parmigiano cheese until melted.  Add the spaghetti to the skillet, and enough pasta-cooking water to loosen the sauce slightly.  Toss and cook for another minute, adding more water if needed.