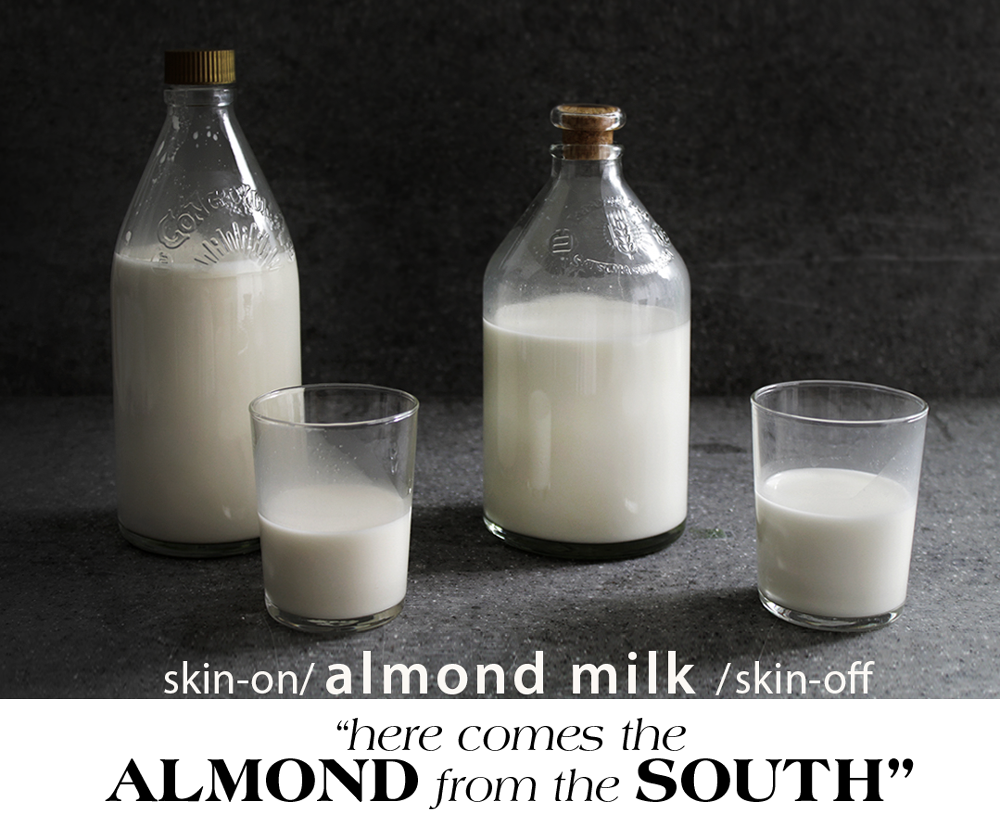 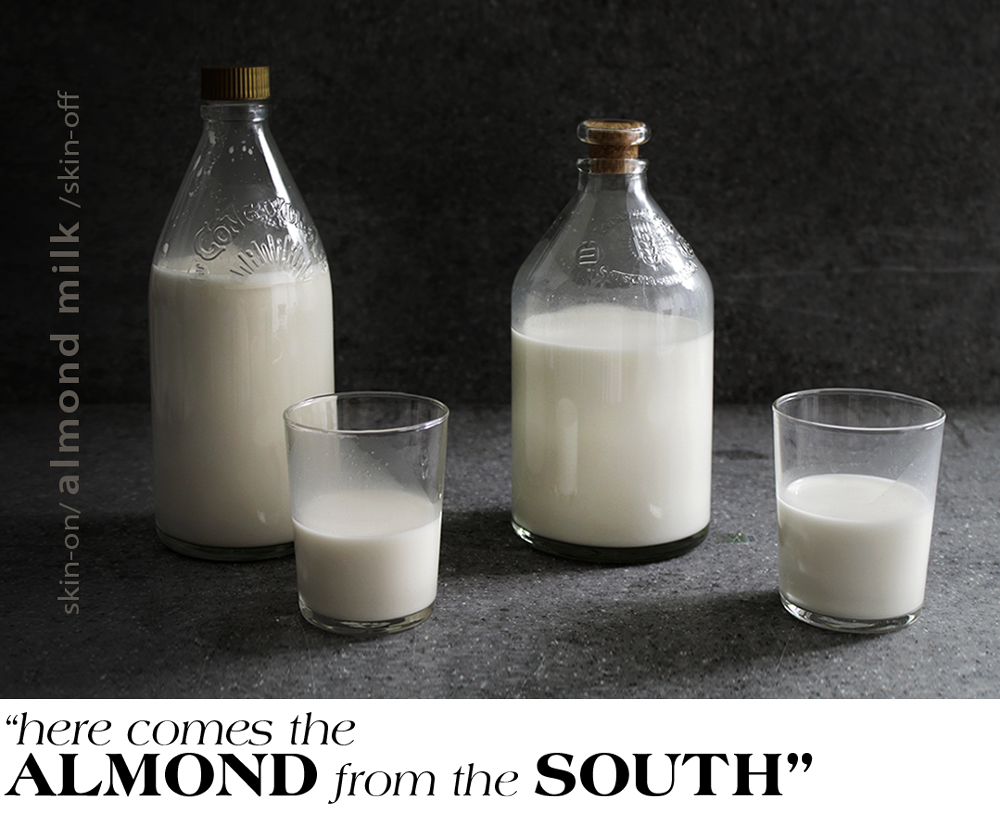 I recently got a little nut job on almond milk, ever since Food52 published an almond milk recipe that unleashed my inner obsession to answer the GREATEST mystery of mine.  The mystery being -why does the typical snacking almonds lack the perfume-y aroma in Asian almond milk or almond extract?  Perfume?  Almond?  YES!  Asian almond milk should be perfume-y and aromatic, NOT the bland milk-like substance America has come to know whose only worth is to be a secondary milk-substitute for the lactose-intolerants.  It has true and honorable culinary status here in Asia, valued for its distinct and elegant aroma which frankly mesmerized me since childhood. 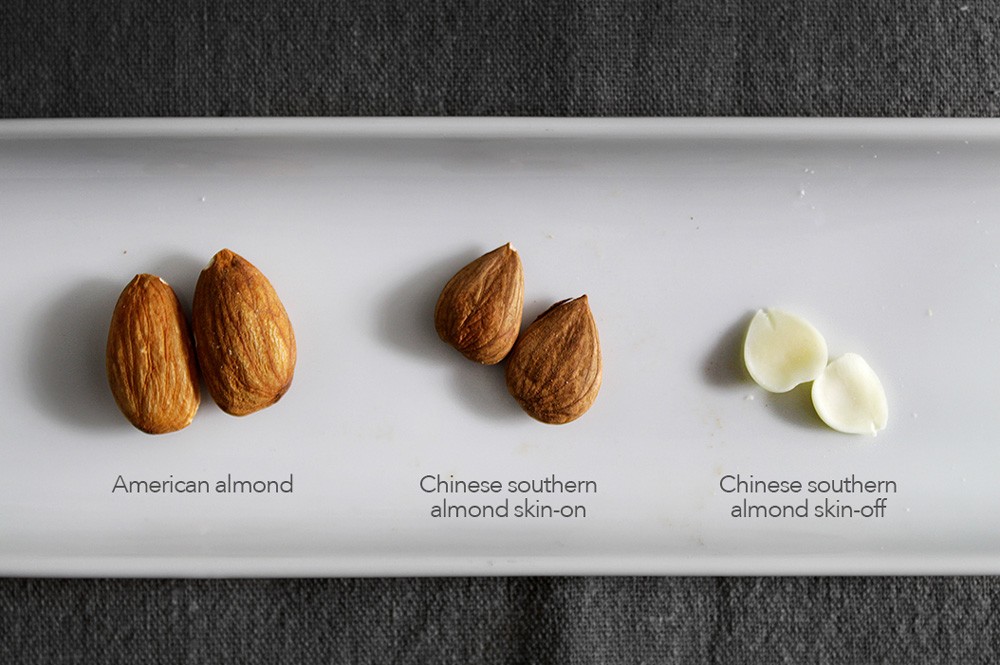 Turns out, my GREATEST mystery has been sun-bathing itself on the first link of the first page of Google search.  To put in blunt terms – Different almonds (duh…).  In the general world of almonds, bitter almond (aka north almond in China) is poisonous so we are not going to give it a voice here (shoot, shoot…).  It is in the variety of sweet almonds where the difference weighs.  There is the typical full-figured American almond, plumply large and frankly… nutty yes but fragrance-less.  Then here comes the almond from the south of China, beautiful heart-shaped and distinguishably… much more aromatic and almost floral.  Even within the Chinese almonds variety, difference can be seen in sizes.  Skin-off almonds tend to come smaller than the skin-on almonds.  So, in a very scientific manner which comes rarely in this kitchen, I decided to put them all to tests. 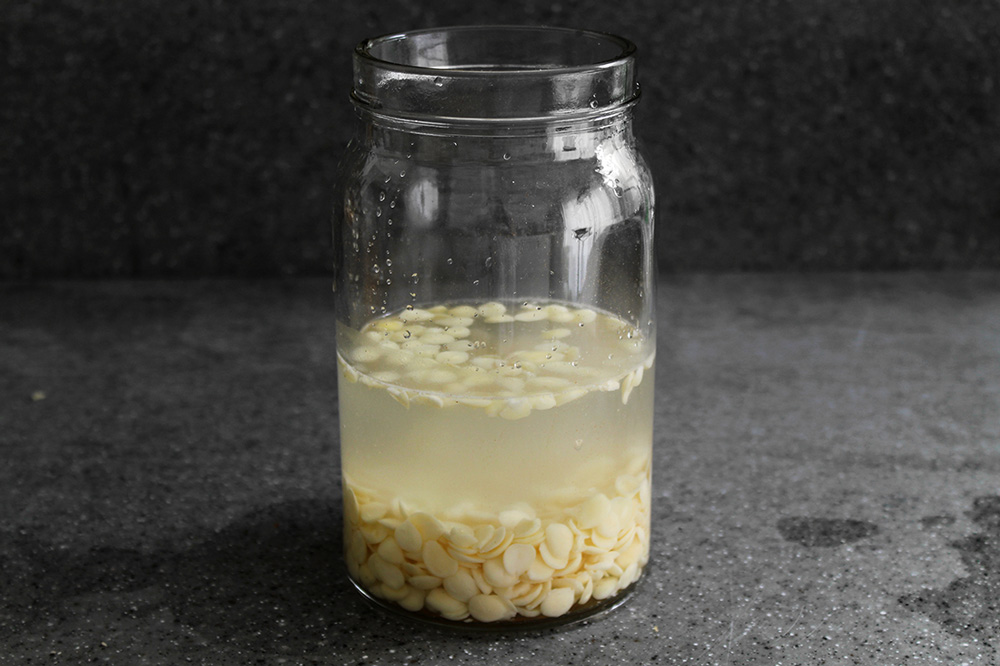 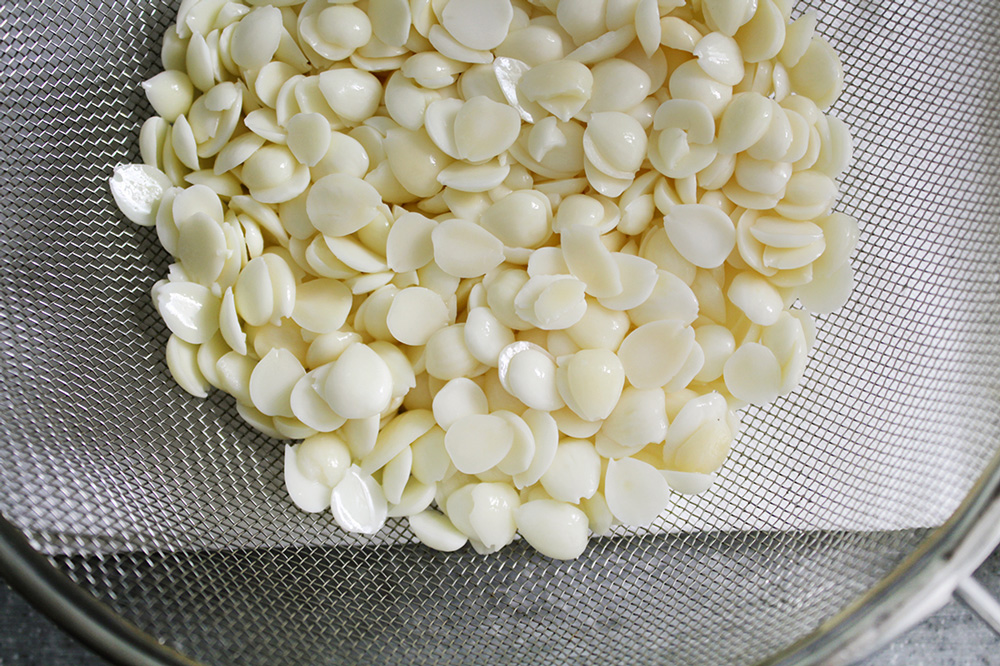 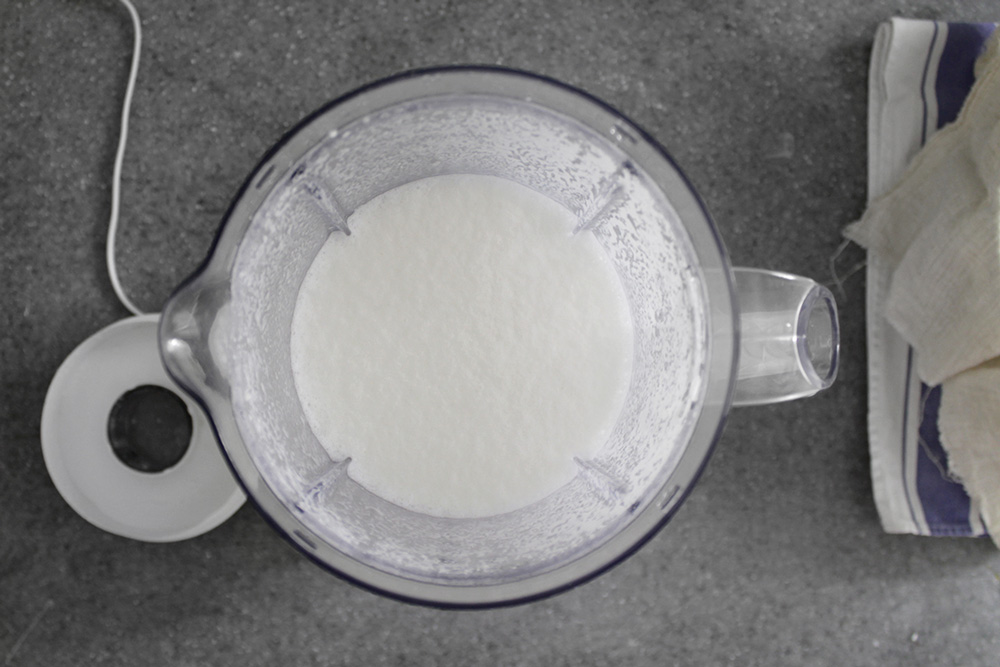 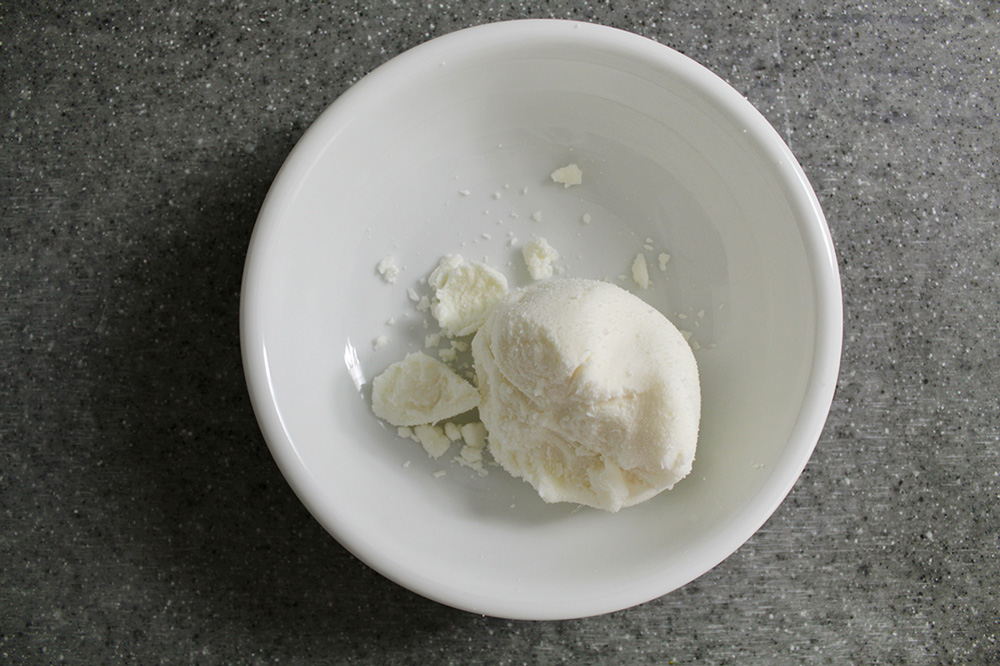 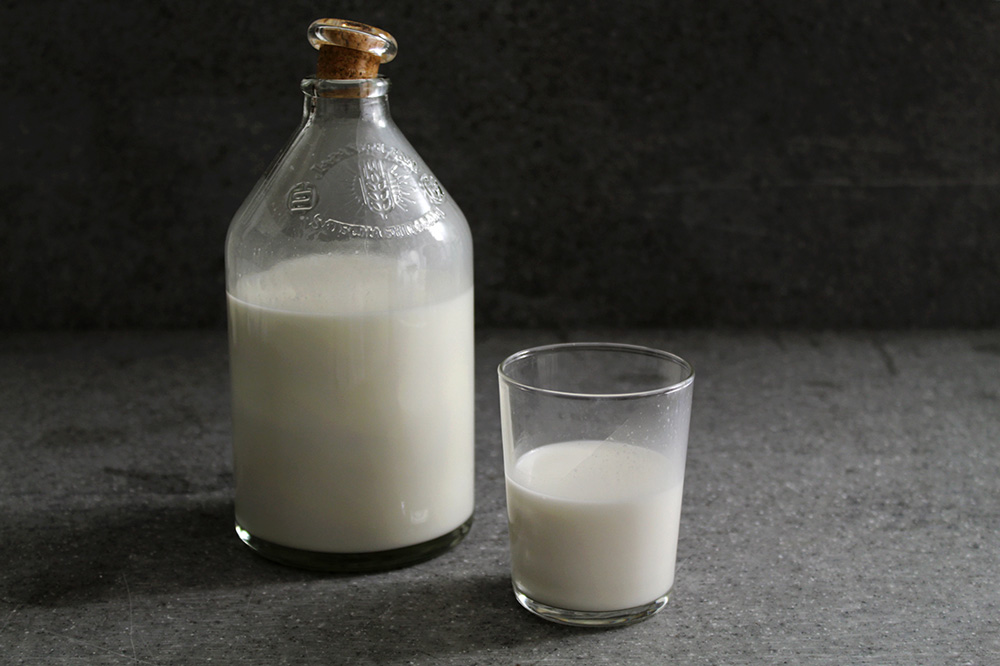 The American almond milk and Chinese almond milk came out fundamentally worlds-apart in flavors BUT otherwise similar in texture and consistency, but there’s more to the techniques and procedure.  The typical American recipe for almond milk blends the almond with its skin on, whereas Asian almond milk recipe, skin off.  So that’s the first experiment using Chinese southern almonds, skin-on/skin-off as specimen where both almonds are soaked in cold water for 24 hours before blending.  Both the skin-on and skin-off almond milk came out incredibly fragrant and floral, milky and smooth, exactly the flavor that captivated my senses since forever.  But the skin from the skin-on almond gave the milk a reddish hue, and a slight… bitter bite that I thought was kind of unpleasant.  Even though the skin is said to contain some nutritional value, I would much recommend using the skin-off almonds when it comes to making almond milk.  But what about American almond that almost always comes skin-on? 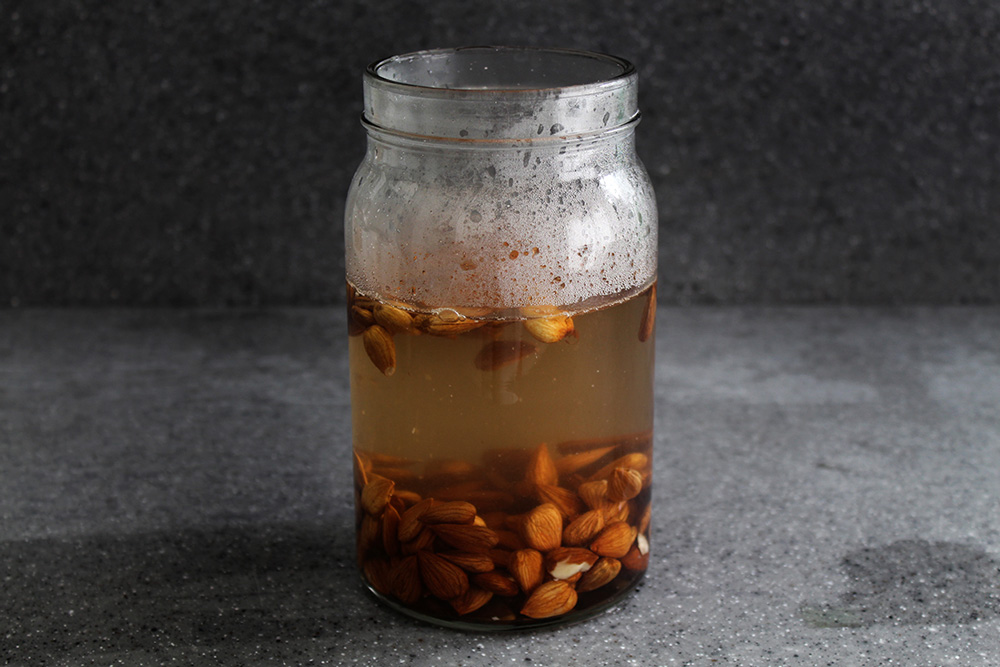 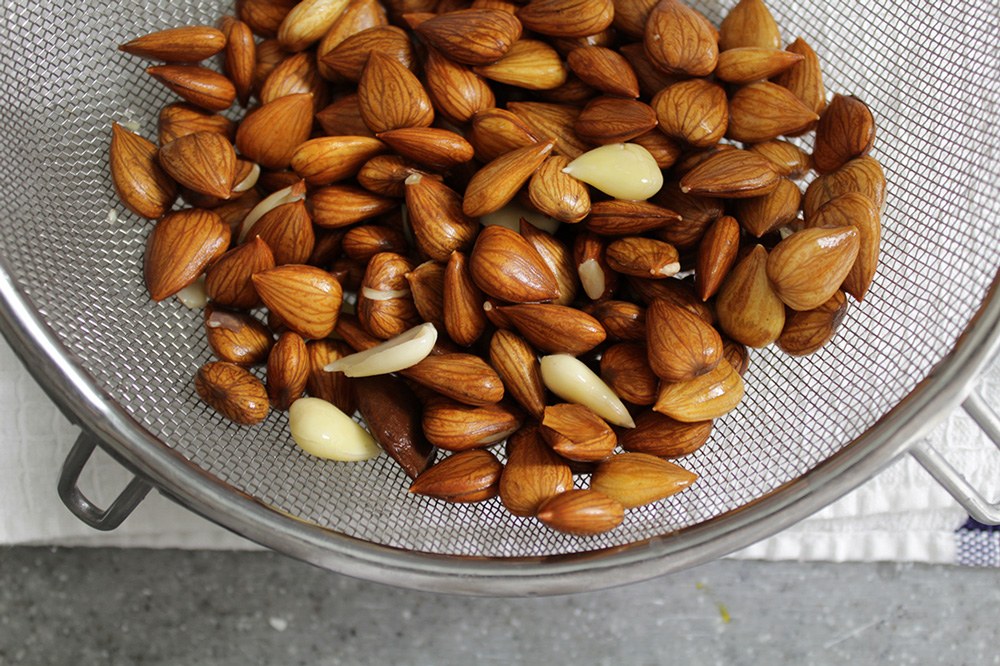 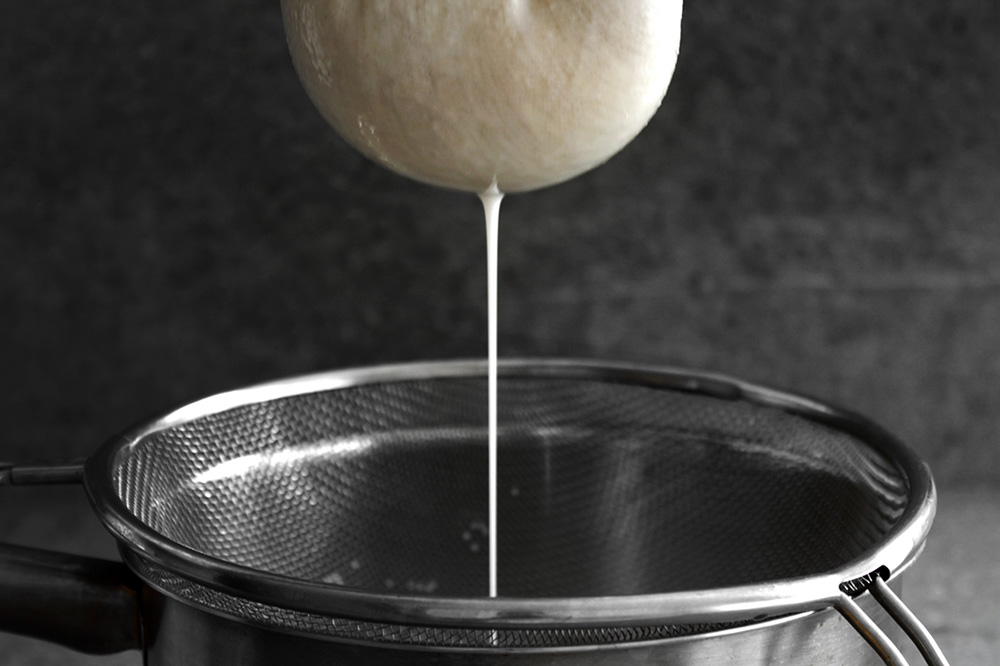 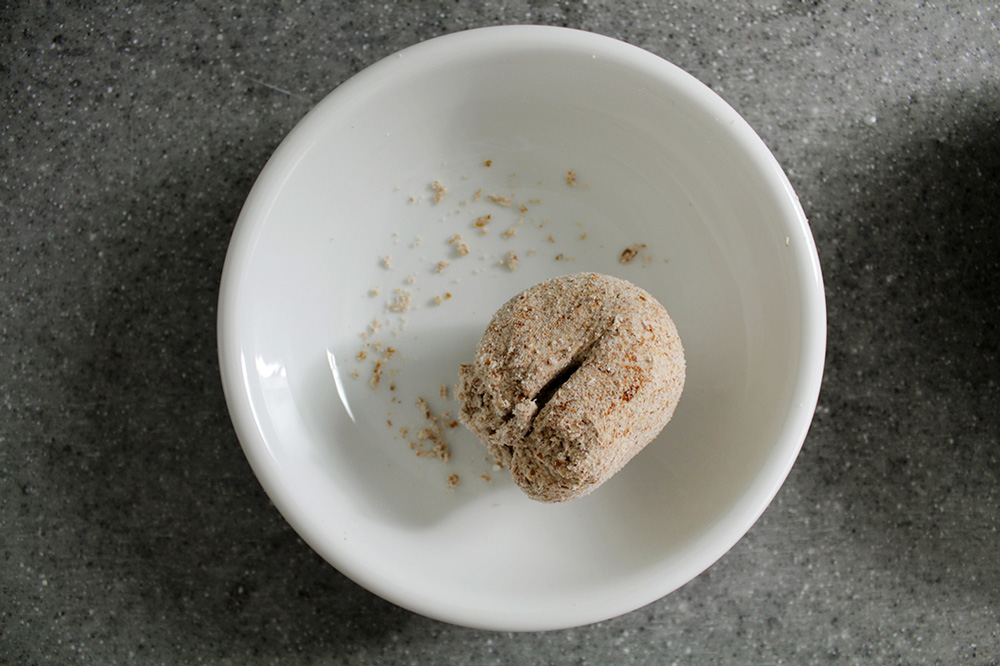 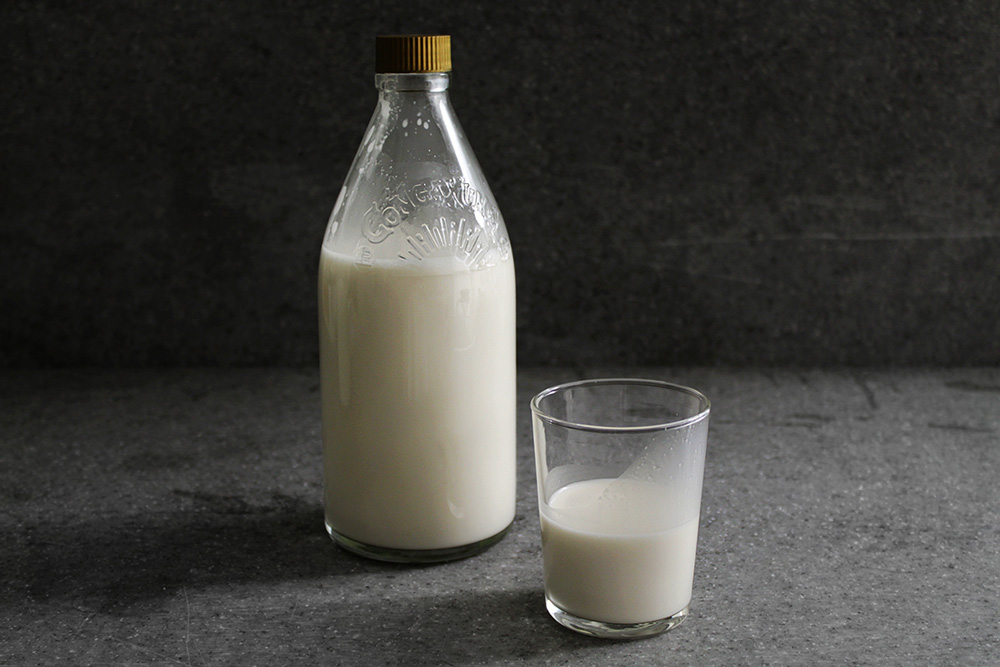 The questions to be answered at this point are these.  Are the skins easily removable after soaking (no one enjoys peeling stubborn things)?  Can I shorten the soaking-time with boiling water instead of cold (24 hours, gosh…)?  Does cooking the milk before straining help improve or deepen the flavor of the milk (like soy milk!)?  So this time I tried using both the skin-on Chinese southern almonds and American almonds, soaked them with boiling water for 6 hours, after which it became extremely easy to peel.  A little pressure between the fingers and they literally CAN’T WAIT to strip… an endearing characteristic to many.  Then the blending-part went just as smoothly as the ones soaked for 24 hrs in cold water.  I then bring the blended milk to a simmer on stove for a couple of minutes before straining.  It takes the edge off the raw nut-taste, gives the milk a rounder… more settled flavor.

Of course there are so many delectable things you can do with this, but… I think there’s enough to work on for now.  Go.  Get nuts with almond milk. 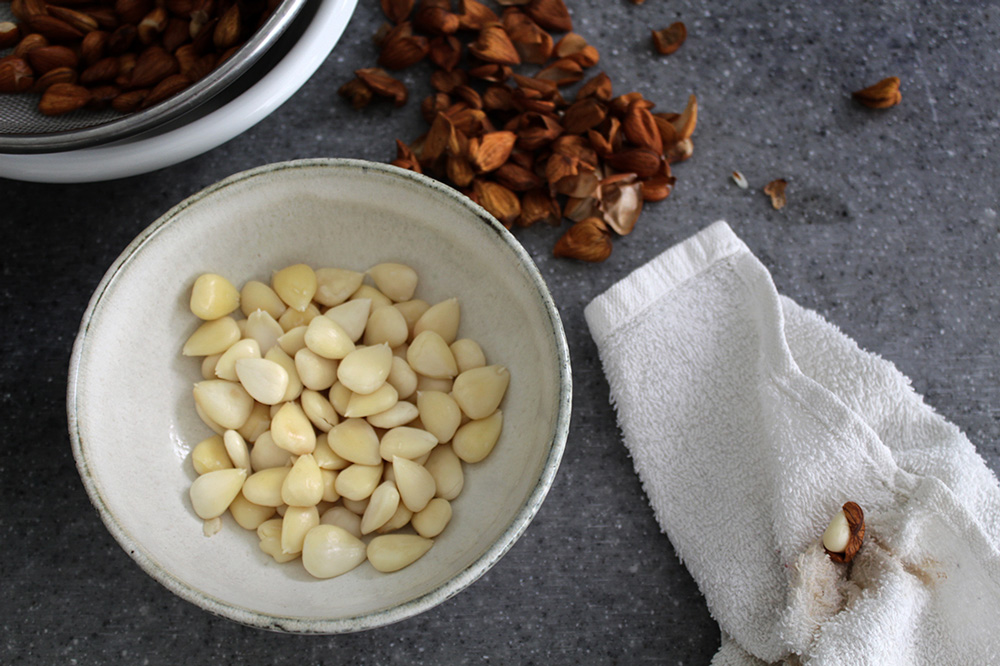 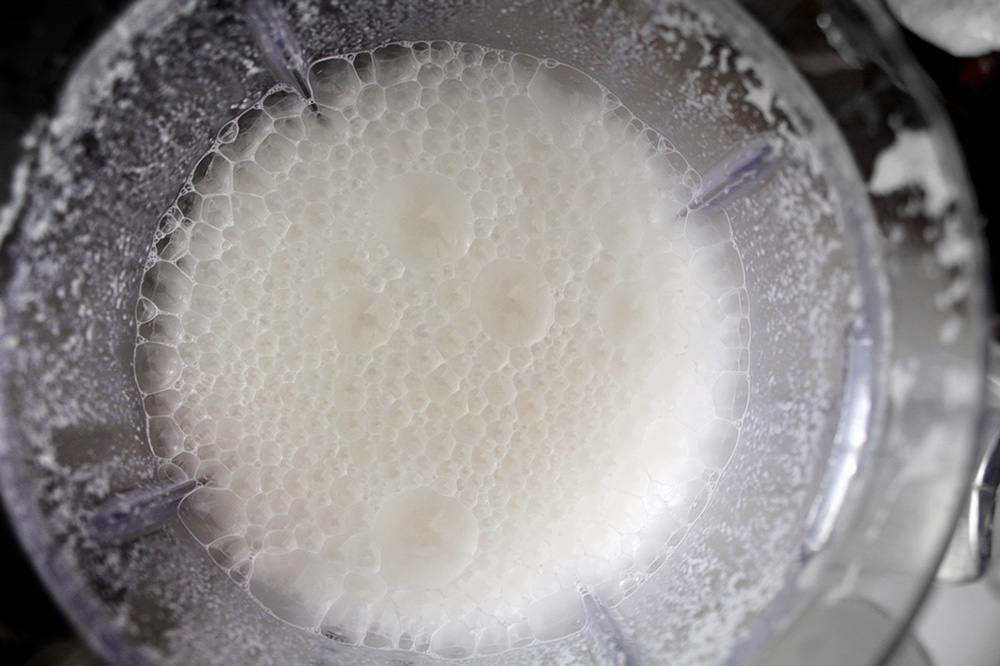 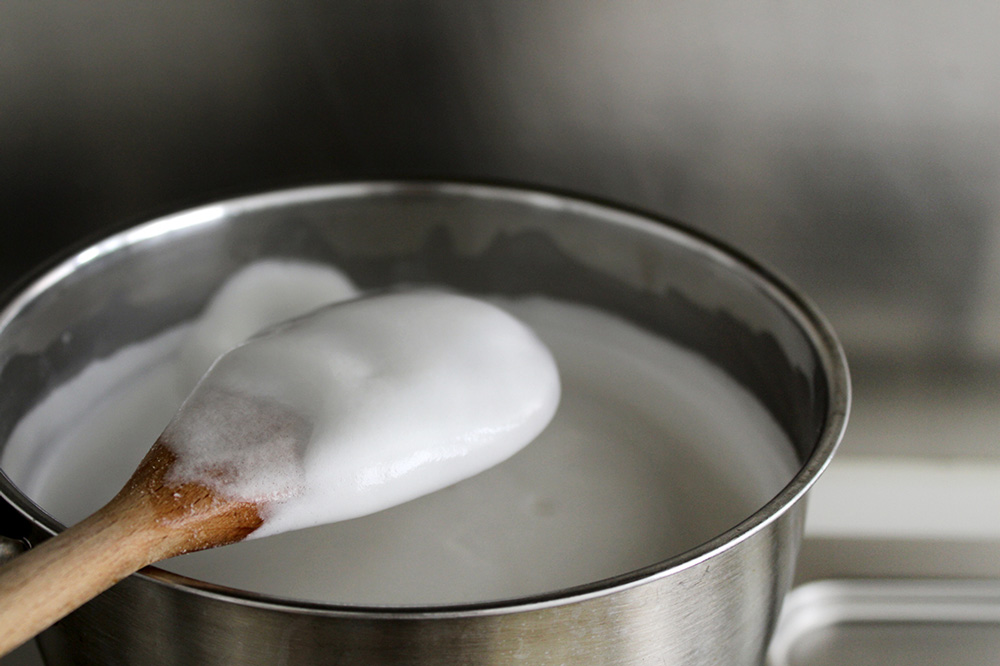 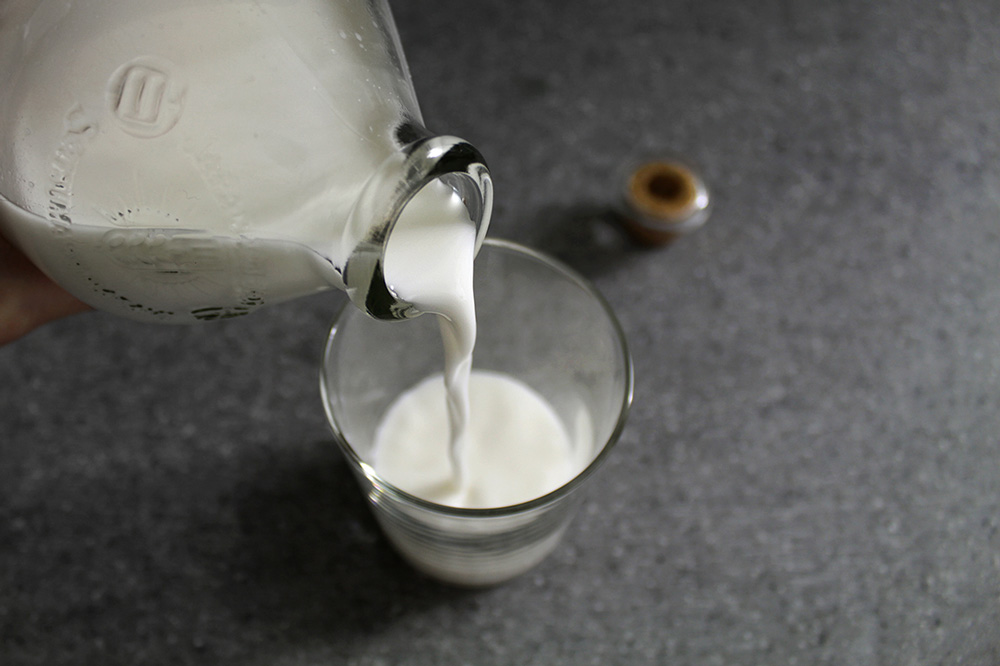 When buying Chinese almonds, NOTE CAREFULLY that the poisonous north almond (bitter almond) is used as a traditional medicine in small quantity, which is also sold at the website given below.  Purchase from the link or make sure you explain specifically if you are buying from an Asian grocery.

Soak the raw almonds in 2 1/2 cups of cold water for 24 hours, OR 3 cups of boiling water (let it cool down naturally during soaking) for 6~8 hours.

After soaking, the American almond should be very easy to peel.  Hold it in between your finger and give it a squeeze and the almond would POP right out.  If you are using skinless Chinese southern almonds then no-peeling is required.  Strain the almond then combine it with 3 1/2 cups of cold filtered/mineral water in a blender.  No need for a fansy vitamix, just a strong-motored blender would work.  Blend the mixture on high for 2~3 minutes until the mixture become extremely smooth and milk-like.

At this point before straining, you could simmer the mixture for a couple of minutes until a thick foam floats on top of the surface.  Or go straight to straining it.

To strain, line a large sieve with cheese cloth over a large container.  Pour the almond milk into the cheese cloth.  If the mixture is boiled before hand, let it cool down before squeezing the cloth together to extract every last drop of the milk.

Keep the milk in air-tight bottle in the refrigerator for up to 1 week. 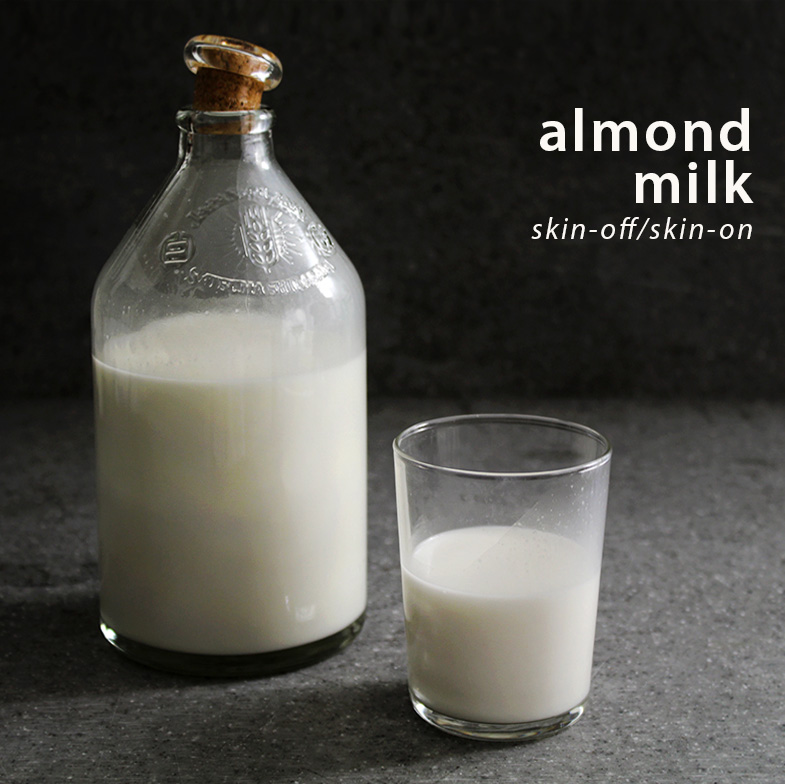