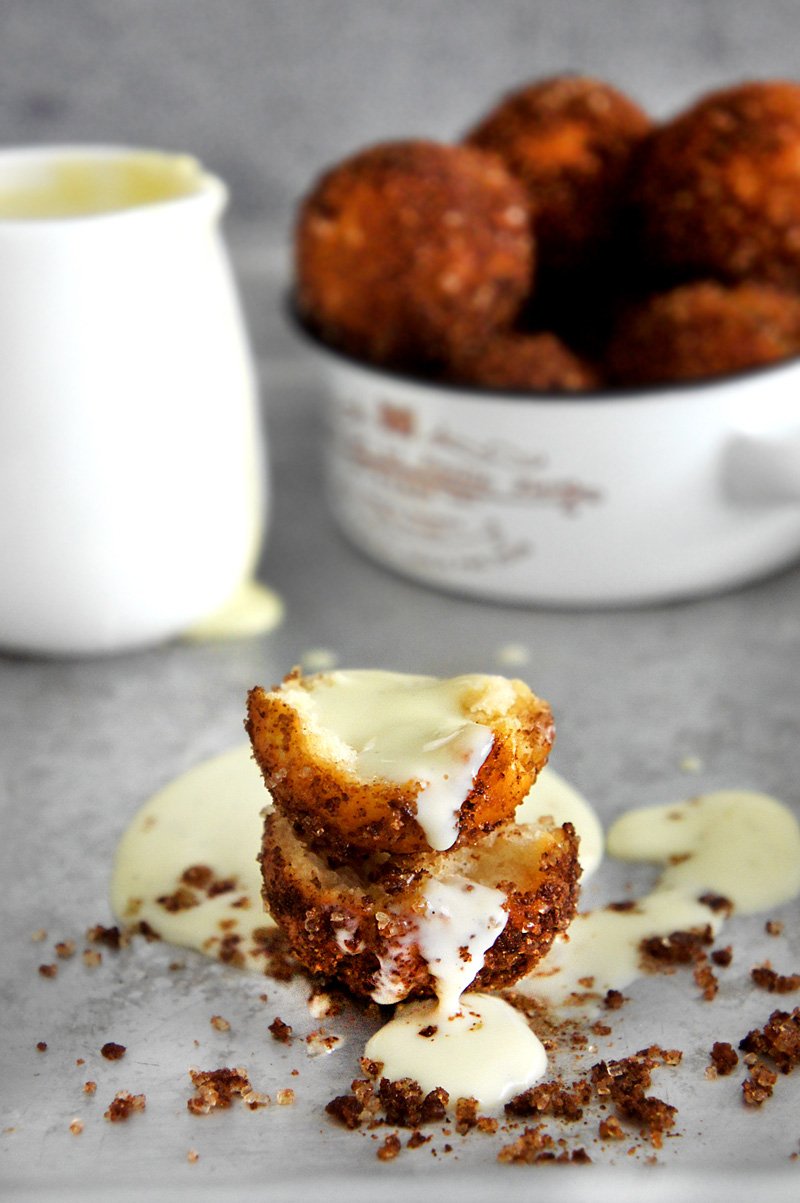 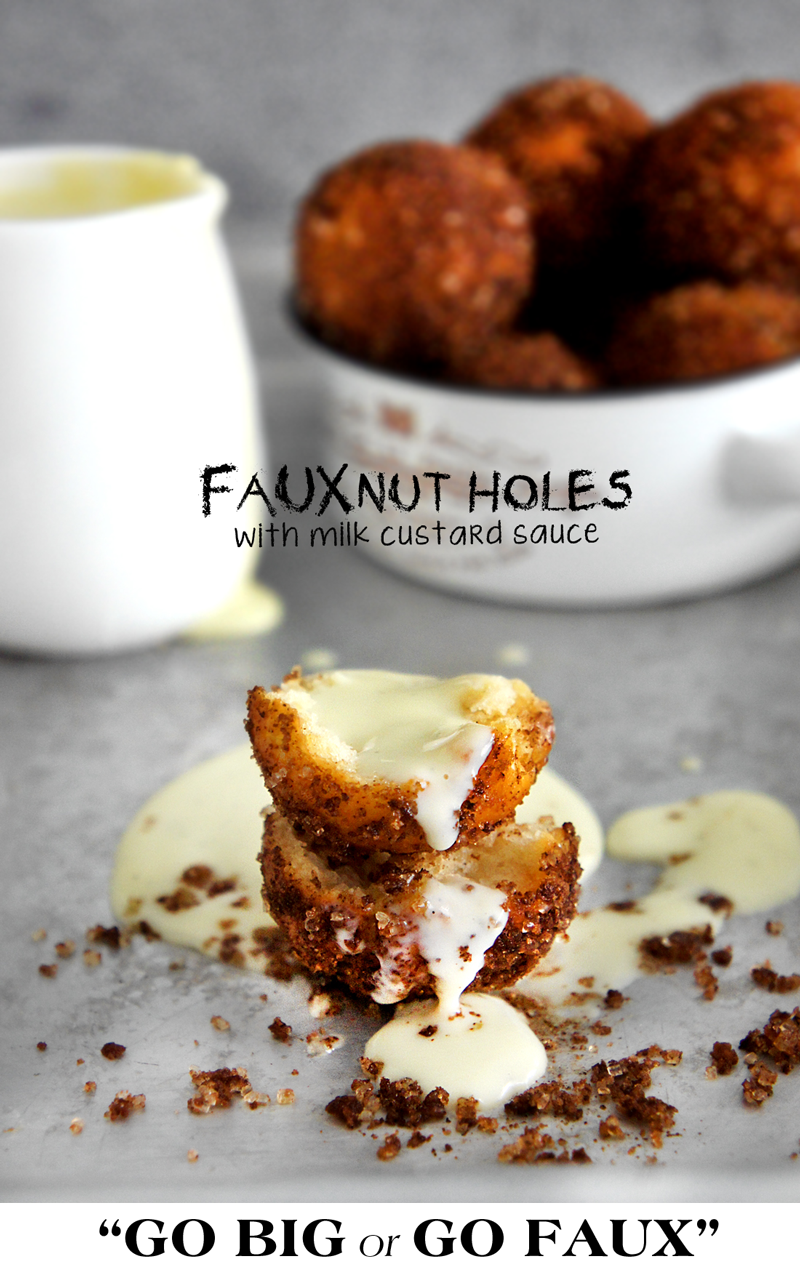 There’s nothing more unappetizing to start this conversation by saying that these days when I sit down, my tummy-folds can sort of touch my thighs…  Nothing more unappetizing…  Not even a fart-joke can top it.  I know that.  So instead, I’m going with a different approach to explaining why I came up with these unbelievably, OUT-of-your-MIND-ly delicious “fauxnut” holes on my table without making you subconsciously touching your gutt while reading. 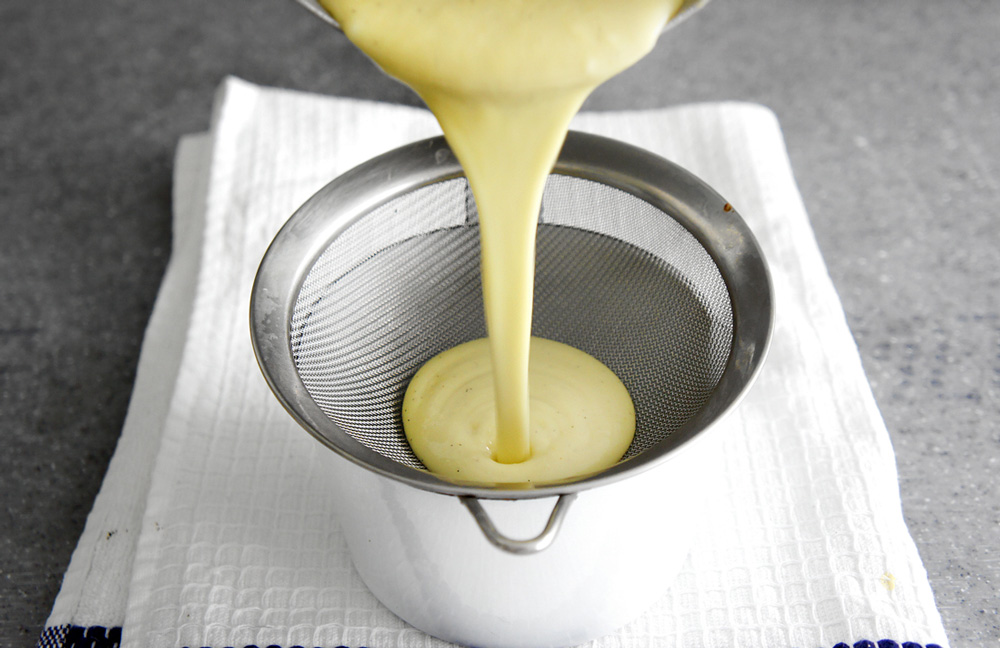 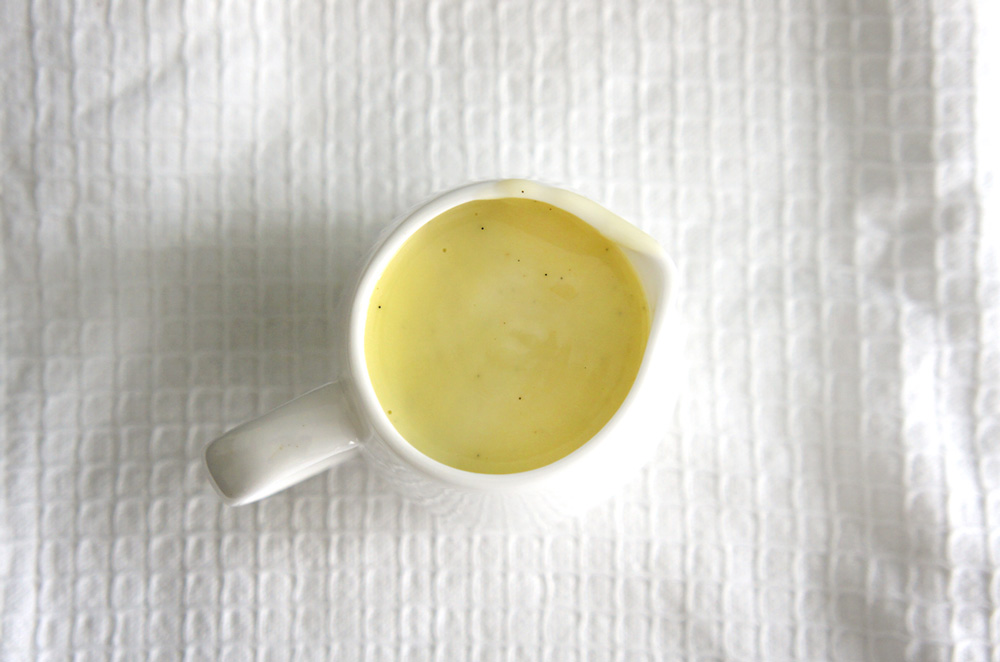 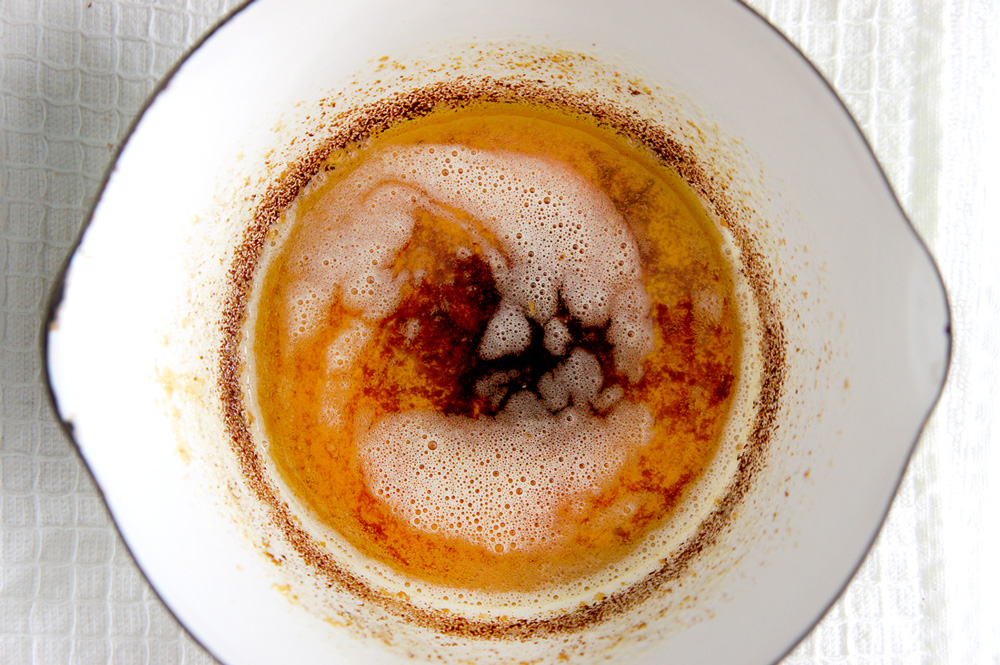 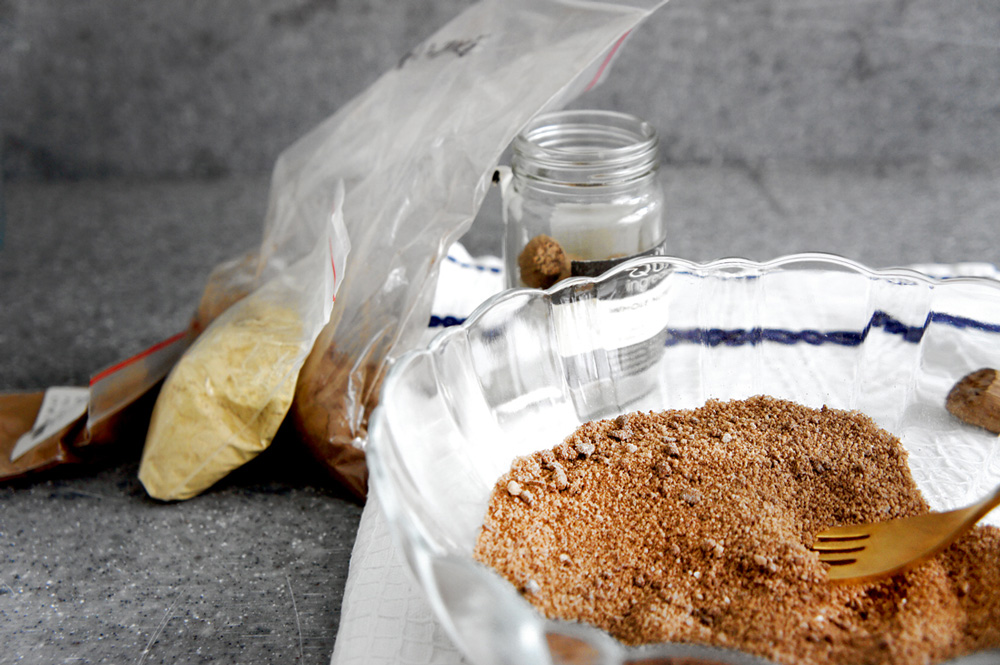 I don’t know what you guys are using to ease the grief from the late Gourmet magazine, but I have been numbing it by dating something just as exciting and cool named Saveur.  It took a little while to heat up but he has moved from the mere rebound-material to becoming one of my can’t-live-without source for cooking inspiration.  I’m thinking about asking him to move in (too fast?).  But the featured cover from his latest issue has caused me to pause and re-think our future as partners for a little bit – a giant big-ass DONUT issue smirkingly staring at my face.  I’m starting to think that he doesn’t understand what I need… 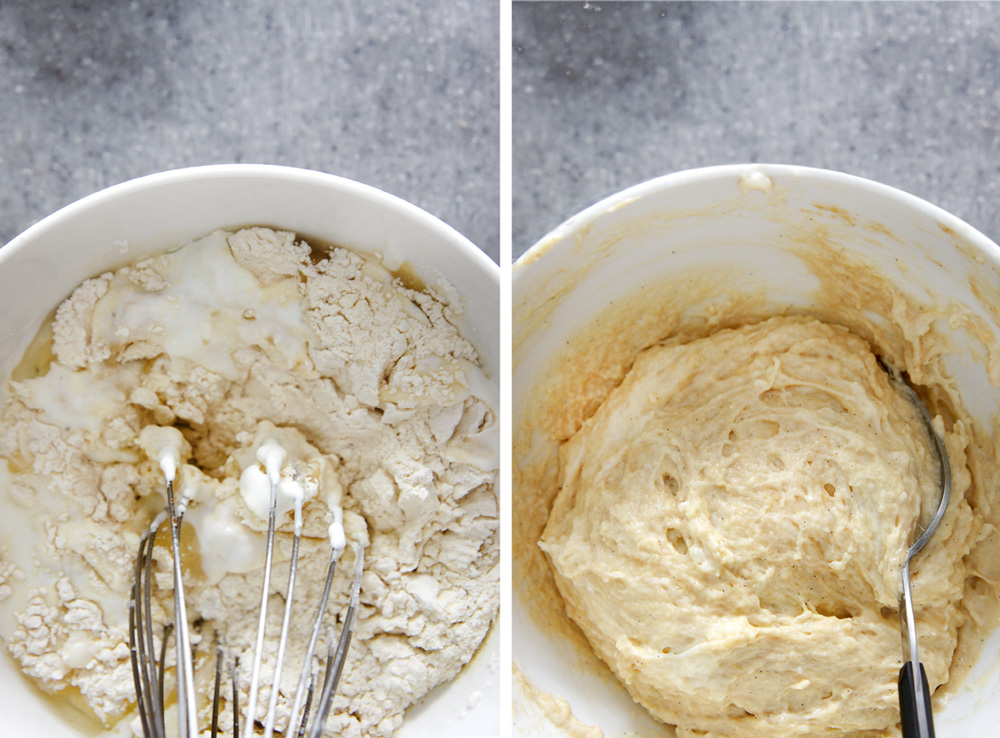 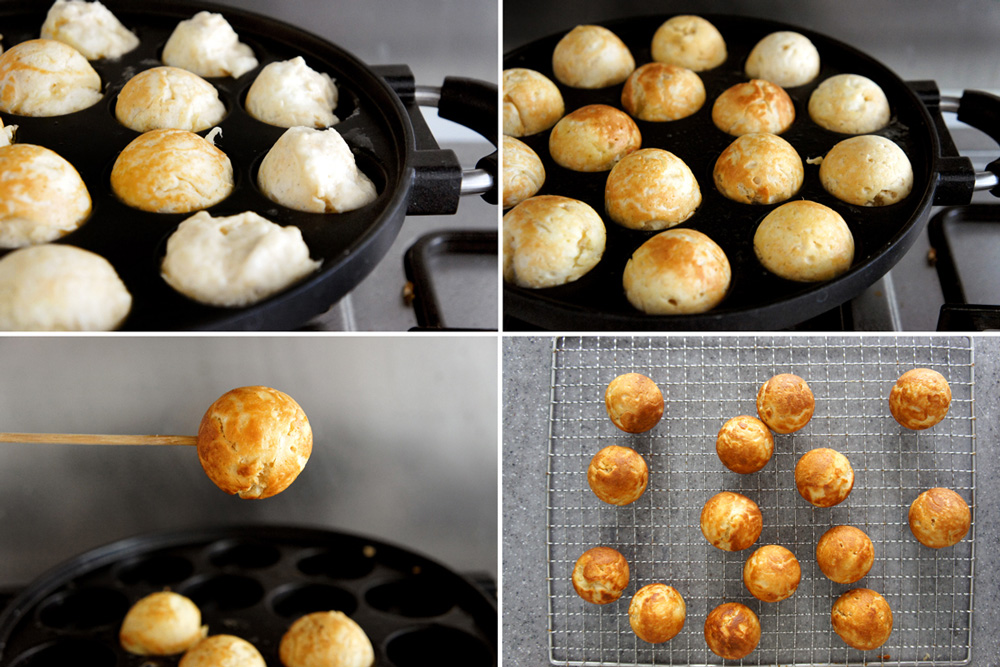 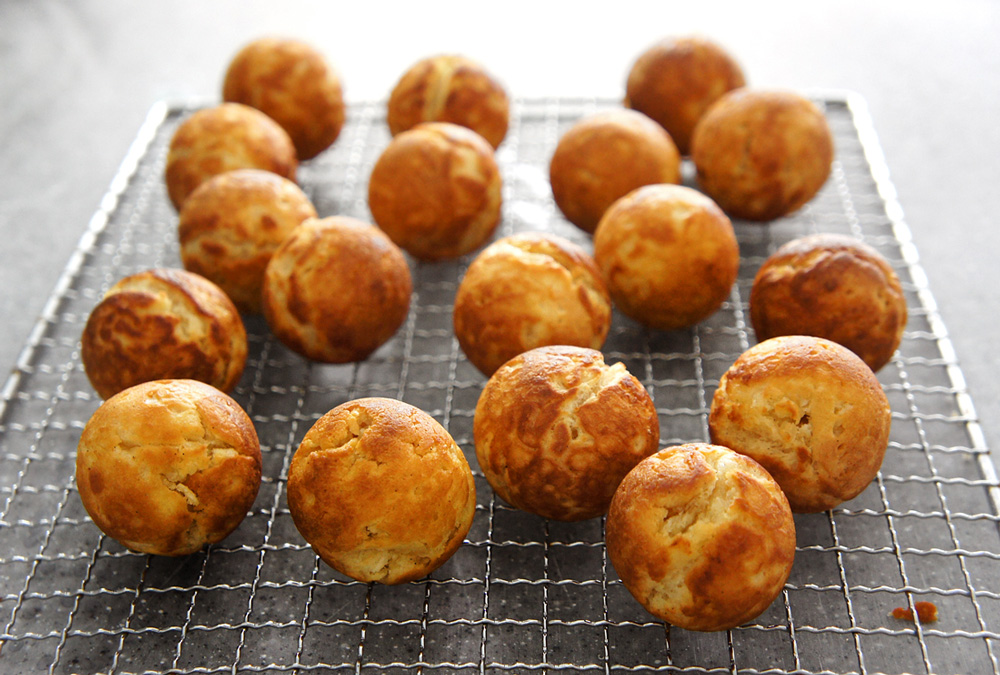 If you are also dating him (bxxch), you might have heard his defense saying that there are allegedly “baked” donut recipe featured as well.  OK.  Here’s the thing.  I pride myself as being a very reasonable and civil  reader, and I wouldn’t picked a fight if not for a very logical and obvious reason.  The so-called “baked” donut recipe might as well be JUST AS BAD if not WORSE than a typical fried donut.  A dizzying 2/3 cup of oil mixed into a batter that consists of only 1 1/4 cup of flour!…  And may I point out that ALL OF THAT is definitely and with-NO-MISTAKE going into the tummy because… well it’s IN THE BATTER!  I’m not even sure if a fried donut should be able to absorb that ratio of fat during frying if the temperature is right…  So I immediately dumped that idea and moved onto the “real” donut page with one recipe in particular called powder sugar donut holes. 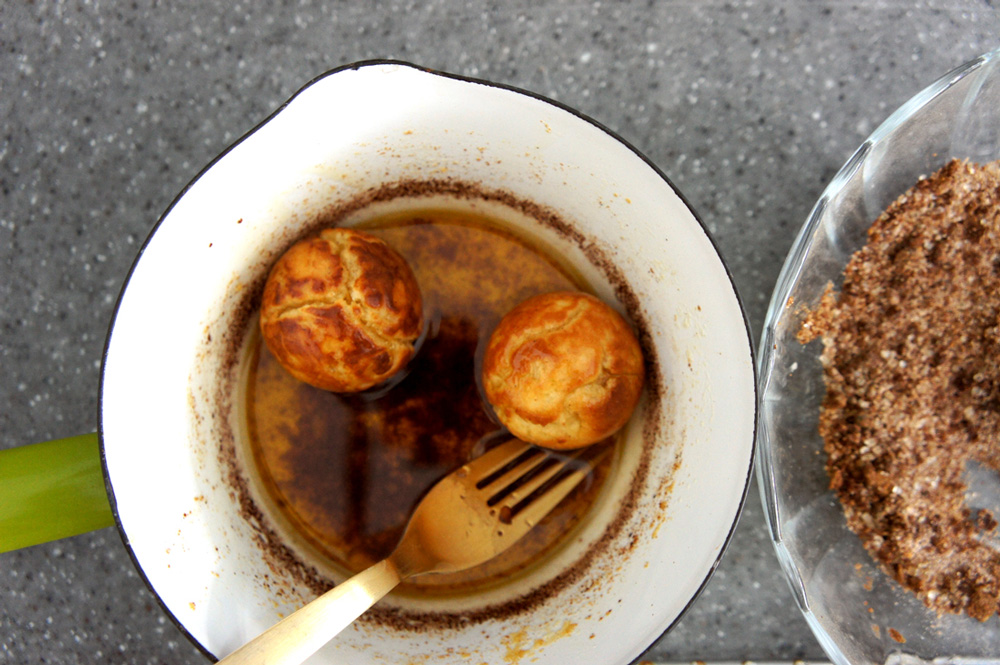 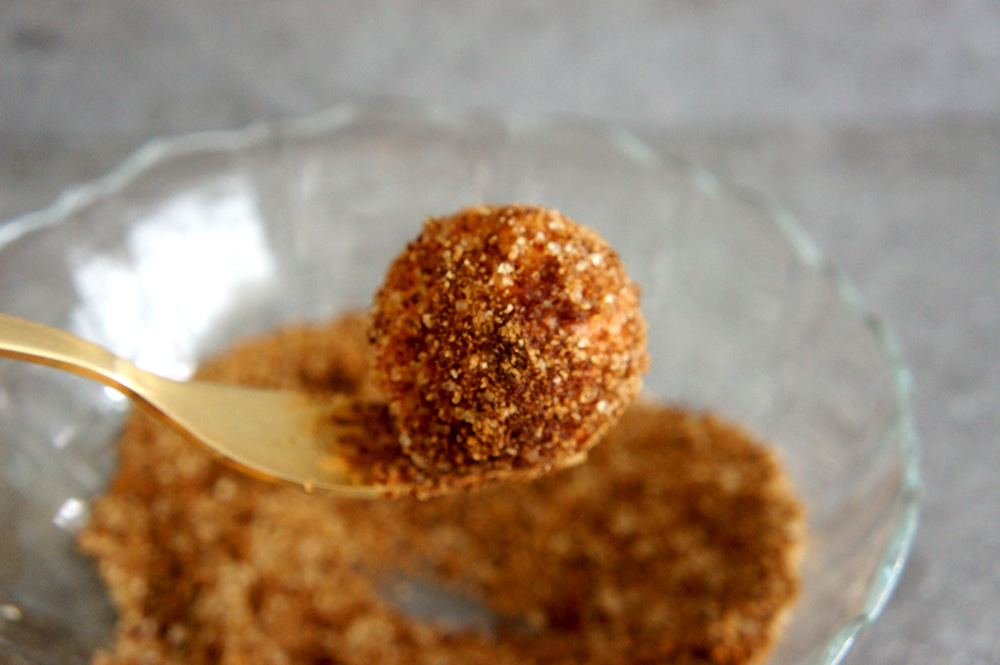 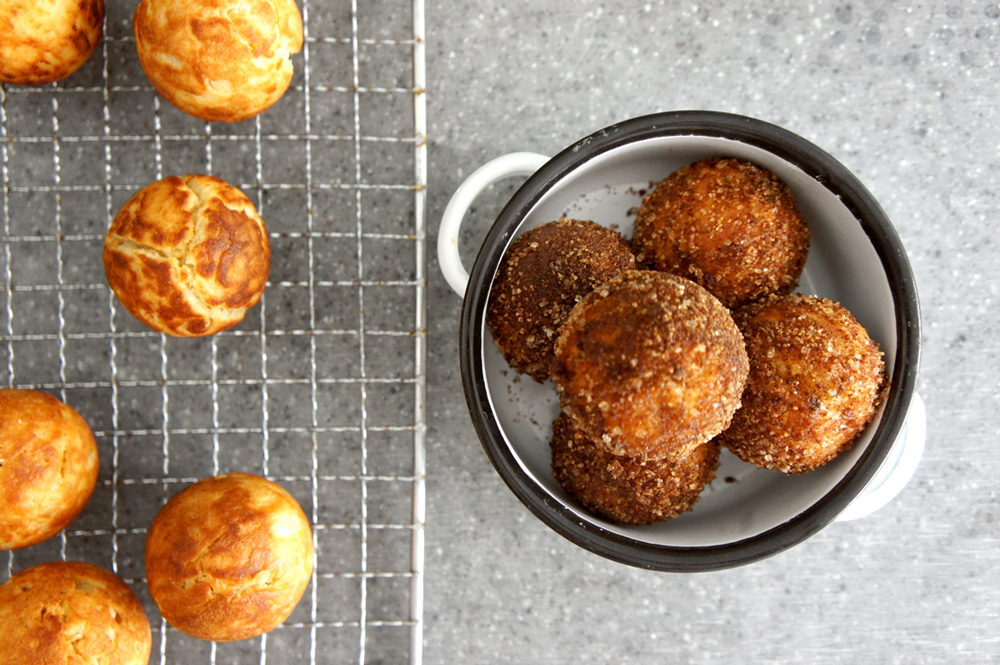 This recipe caught my attention because it’s basic enough to be wildly adaptable AND with only 2 tbsp of melted butter in the batter to a ratio of 1 1/2 cup of flour.  But you say “but… but… it’s a fried donut!”.  Oh no no neeeu… my friends, there is an ingenious way to turn them into donut holes without frying which brings me to say for the third time on this blog and I’ll say it again – shh… quiet… listen…… GET AN EBELSKIVER PAN!  I have for once and twice explained why this is one of the most ingenious piece  of invention in the kitchen and I’m not gonna repeat myself.  So just GO GET IT.  Go.  NOW!  I’ll wait while you do a few clicks on your browser which is all it takes these days to buy something.  Go on…  yeah?  you there?  OK.  Now we can talk about how to turn boring powder sugar donuts into extraordinarily faux ones.  First, we are going to brown a batch of butter (relax… 100 gram of melted butter is BARELY 1/2 cup…) and we are going to dip these beautiful fauxnut  holes in the browned butter (… and after all the dipping there’s still 1/4 of it left un-used), then roll it into a heaven dust of spiced sugar made with cinnamon, allspice, ginger and nutmeg…  AND THEN…. 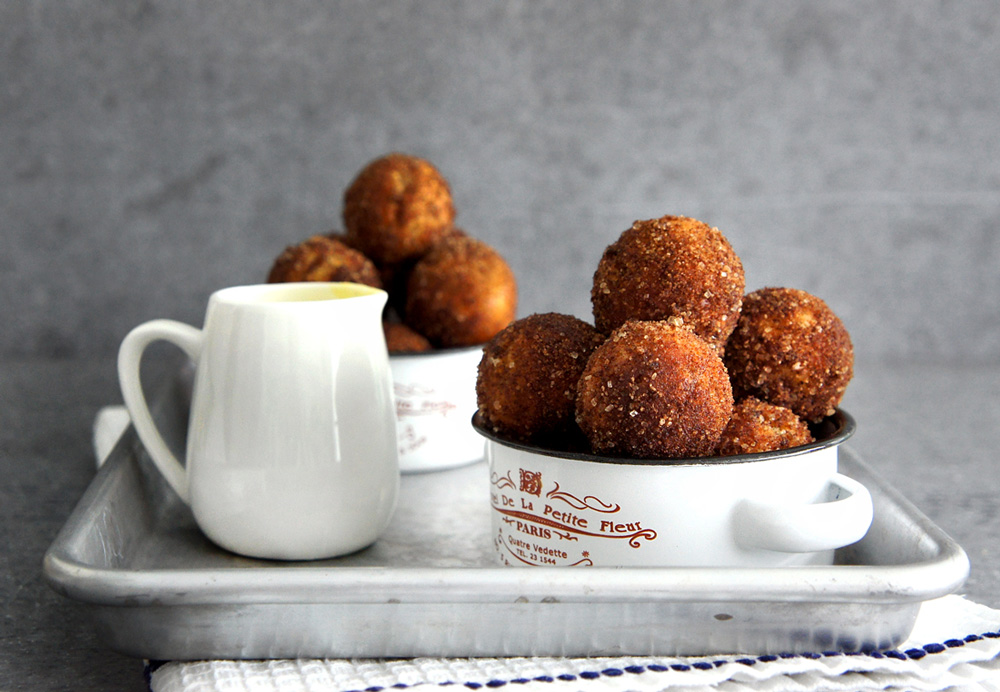 Drizzle a warm stream of vanilla bean custard over it to make it extra decadent… and rich… and… you can’t believe the INSANE GOODNESS of these!!… what?  !!!Who has tummy-folds?! 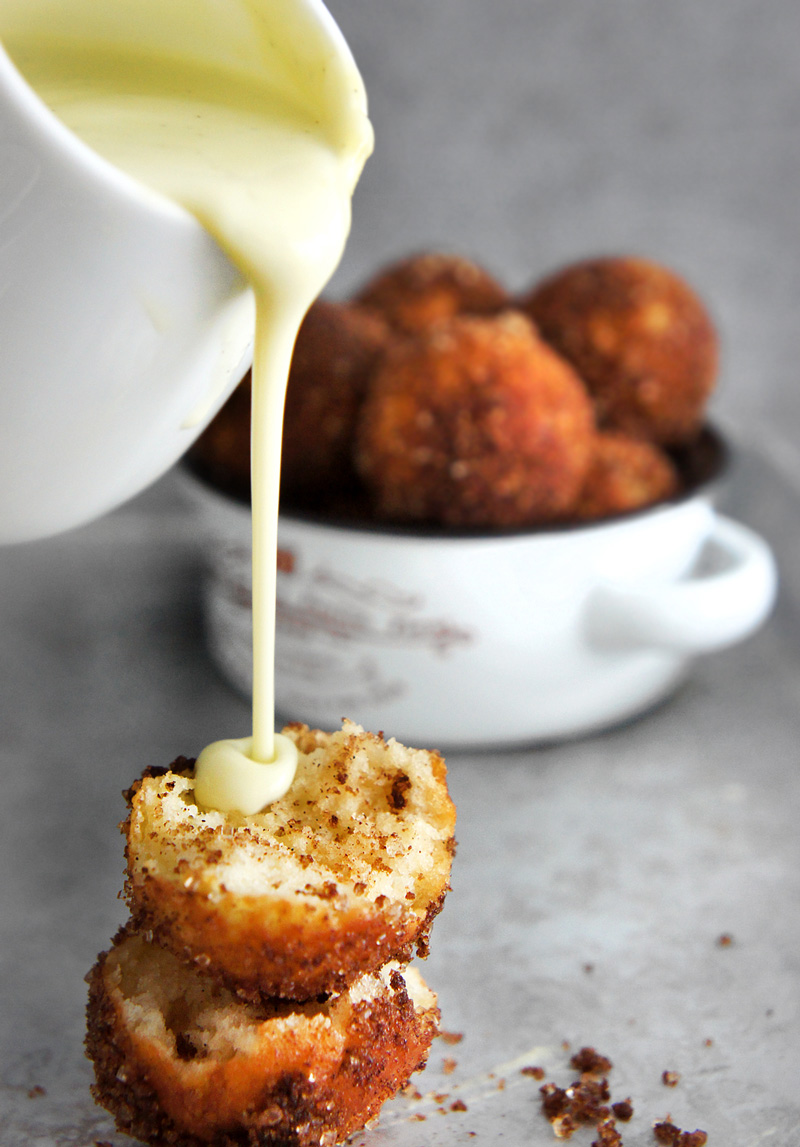 You can find ebelskiver pan easily online such as this adorable one.

There are a few things I changed from the batter recipe.  Vegetable oil instead of butter.  3/4 cup of plain yogurt instead of 1/2 cup of milk.  And omitted 1 tbsp of instant potato flakes because I don’t have it on hand.

First, make the milk custard:    Beat 3 large eggs in a small sauce pot and set aside 3 tbsp of it into another bowl for the donut batter.  Add milk, the seeds from 1/4 of a vanilla bean, sugar and corn starch.  Whisk until smoothly combined.  Set the sauce pot over low heat and start whisking vigorously.  DO NOT, and I repeat, DO NOT walk away from this pot (unless you see a mushroom cloud on the horizon) because the second you walk away from it the eggs will start to curdle.  Keep whisking and whisking and whisking until the mixture starts to thicken up slightly and steam is coming out of the pot.  Take the pot away from the heat and whisk in 1 tbsp of unsalted butter until fully melted.  The custard should be slightly thick but “pourable”.  It isn’t necessary but there’s always a chance of curdled eggs in the mixture so I like to strain it for a smoother consistency.  Set the custard aside until needed.

Brown the butter and mix the spiced sugar:  Place 100 gram of unsalted butter in a pot and set over medium heat.  The butter will start to melt and sizzle, but as soon as the sizzling sound subsides (approx 5~6 min), it means the butter is browned and ready.  Turn off the heat and set aside.  Evenly mix sugar, brown sugar, ground cinnamon, ground allspice, ground ginger and grated nutmeg in a large bowl.  Set aside.

Make the fauxnut hole:  In the bowl where you set aside that 3 tbsp of egg, add the plain yogurt, vegetable oil and vanilla extract.  Evenly mix it.  Then in another bowl evenly whisk together bread flour, sugar, baking powder and salt.  Add the dry ingredient into the wet ingredient and mix together with a fork until you have a very sticky and thick batter.

Set the ebelskiver pan over medium-low heat and brush a little bit of the browned butter into each molds.  Have 1 spoon on each hands, scoop the batter with one spoon and scrape it off into the molds with the other spoon.  You only want to fill the mold about 80% full because the batter will puff.  The best way to turn the fauxnut holes is with 2 wooden skewers.  Try tipping the fauxnut hole on one side and if it tips easily which means it’s “turnable” now.  Press the fauxnut hole on one side and flip it over.  Keep turning and rotating them until every sides are nicely browned (this will take a few minutes).  Test the done-ness by inserting the wooden skewer into the fauxnut holes.  If the skewer comes out clean that means it’s done.  Let the fauxnut holes cool on a cooling rack for 10 min.

Dip each fauxnut holes in the browned butter, then roll it inside the spiced sugar until evenly coated.  Serve with the milk custard sauce.  Go big (literally) or go faux! 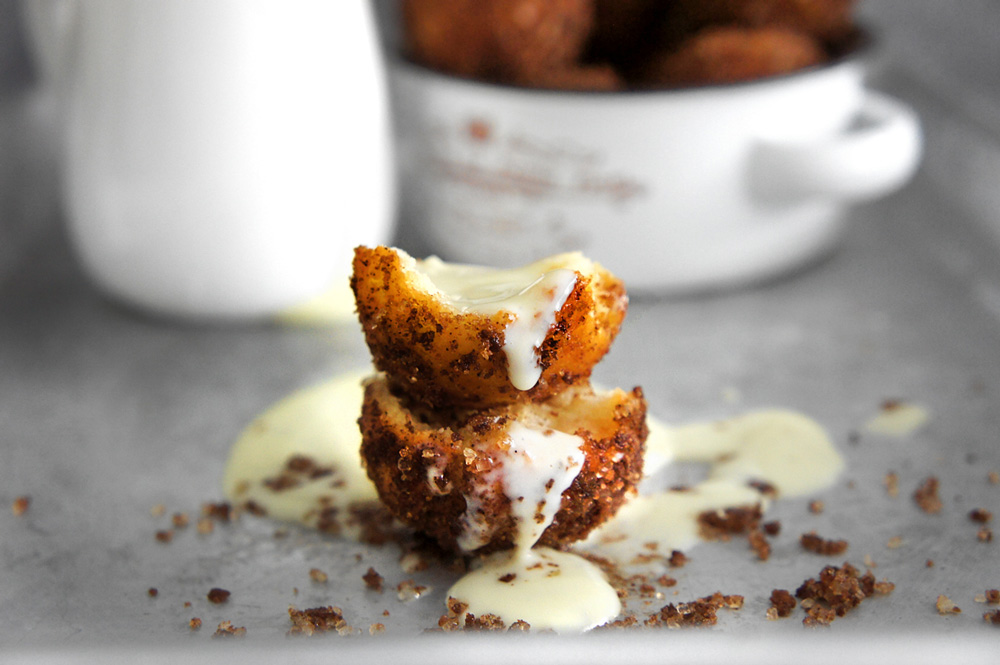