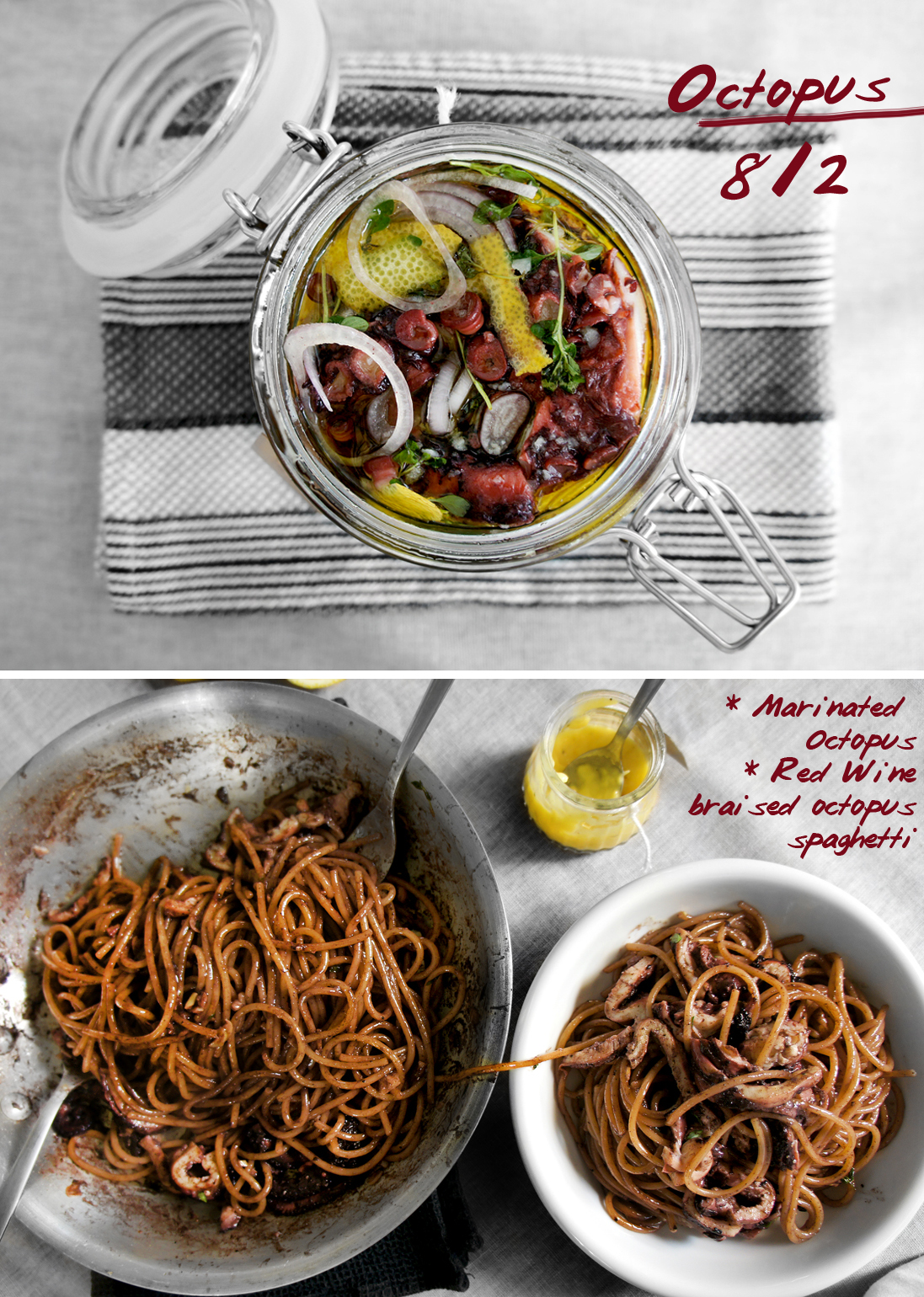 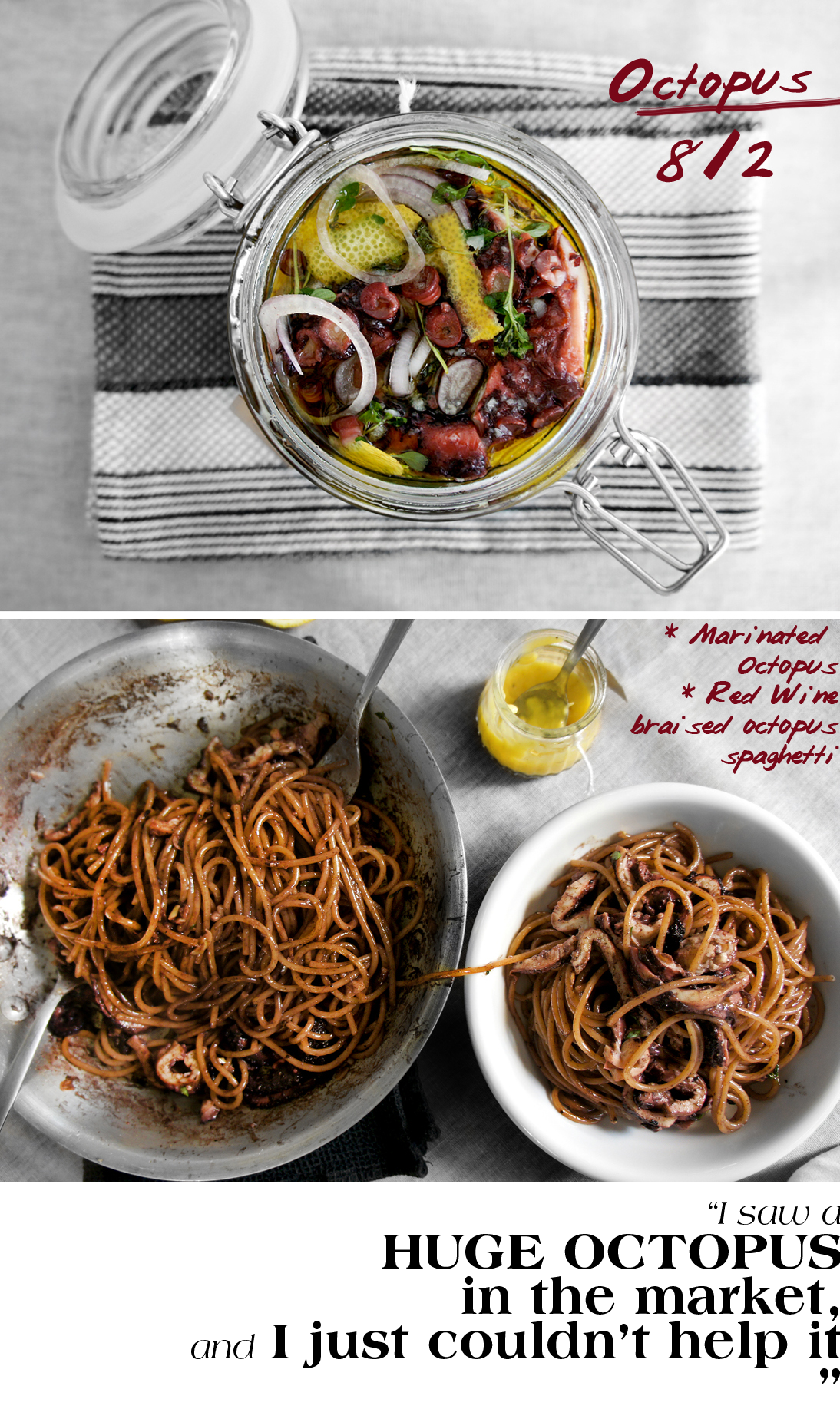 HuuuuuGE~!  And, no.  I couldn’t help it.  I know I’m supposed to be nurturing baby tartlets, or summer fruitcakes, or at least an icy cocktail because that’s just the kind of things people like to lust over this time of the year.  Not some giant 8-legged sea monster that they rather watch strangling the Empire State Building, than laying dead in their kitchen sink.  But, no.  I.  Just.  COULDN’T.  Help it.  Have you ever tasted a great octopus?  If pure culinary bliss doesn’t do the trick, let me appeal to sentiments.  This beauty instantly brings me back to my fond memories of that wonderful and sunny day in Nice, when Jason found a specialty food shop that gave us the most succulent marinated octopus to snack with on the way strolling back to the hotel.  And I thought to myself, “Nevermind craving this back home because I would NEVER find a quality, freshly octopus… ”  Well… hello there~. 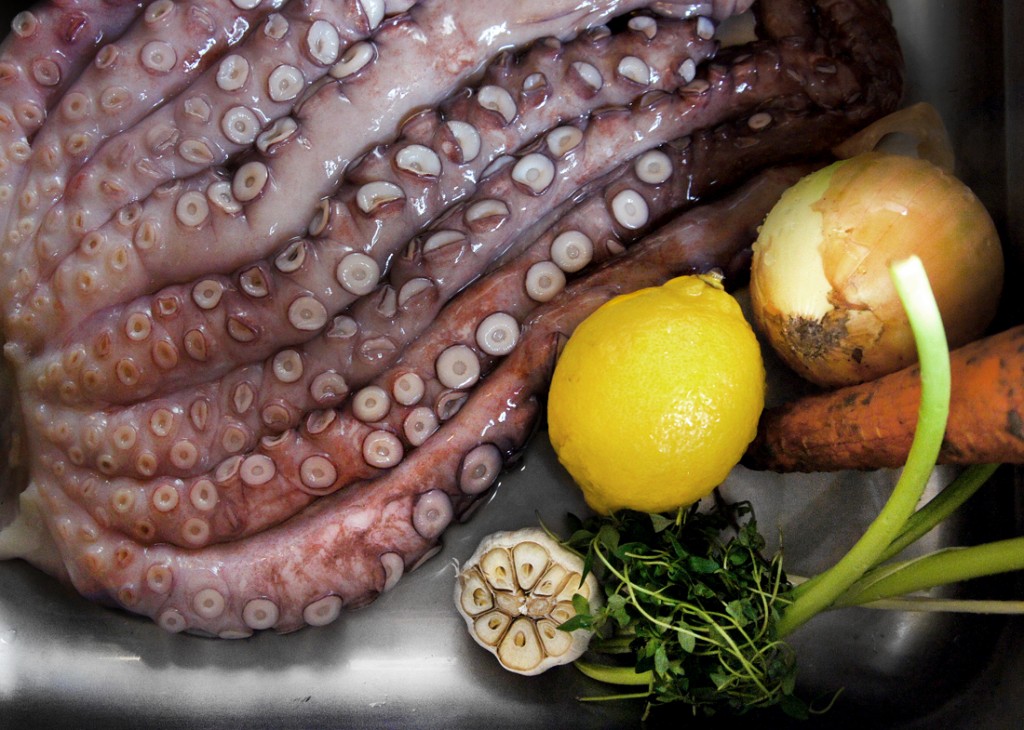 So please entertain me a little here and let me tell about how I fought and wrestled with this creature like Alien VS. Predator.  I promise I will keep this one short.  If it gives anyone the slightest confidence, this is only the second time I dealt with an octopus.  So see.  Experience not necessarily required.  And also if it gives anyone any relief, to myself and PETA at least, this thing already came dead as they often do.  I wouldn’t know the first thing of how to whack an octopus… 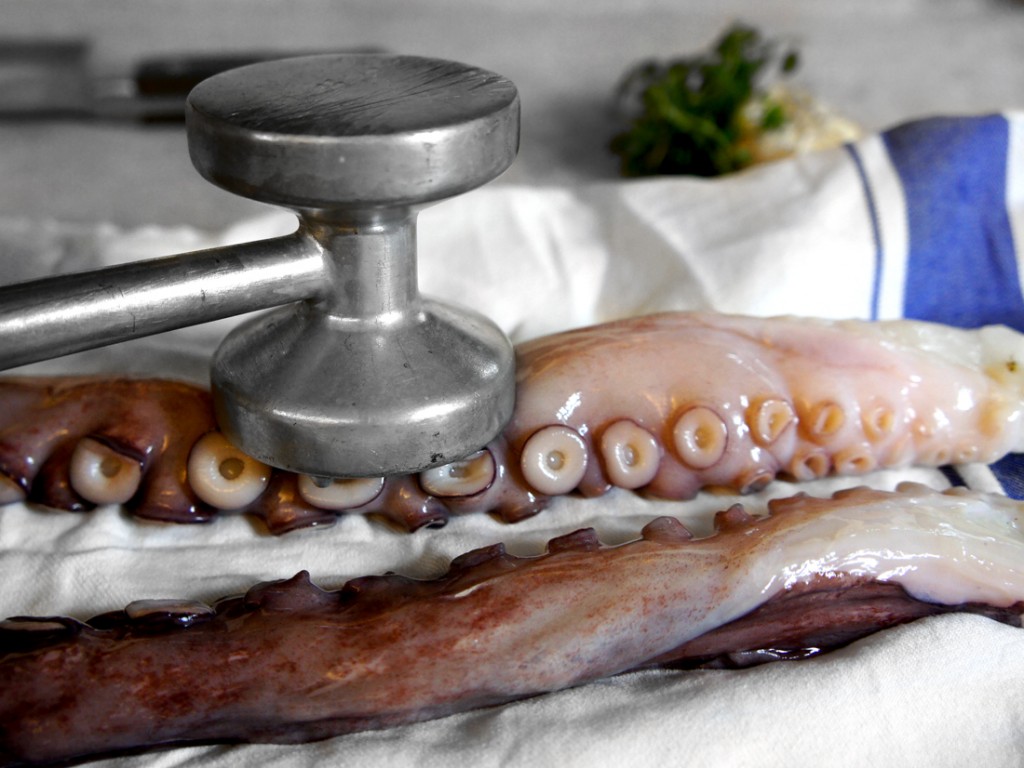 So here I’m doing an Octopus 2 ways hence “8/2”.  Get it?   Hahaha…ha…  kuh hum…  Anyways, I’m using the thicker part of the tentacles to make a marinated octopus, then the body plus the tentacle-tips for a red-wine-braised-octopus spaghetti.   Utilizing every edible part of this monster.  The second I start thinking about cooking octopus, I recall some wise words from Michael Chiarello’s “Bottega” cookbook… something about octopus tumbling in a washing machine with golf balls…  Yea, I’m pretty sure that’s how it went.  Well… DON’T do that.  I’m not gonna do that.  My apartment is a rental to say the least.  So to tenderize the octopus, I would suggest just banging it with a meat pounder a few times like how the Japanese do with a daikon.  Sort of to break up the muscle tissue a bit before cooking.

So let the battle begin. 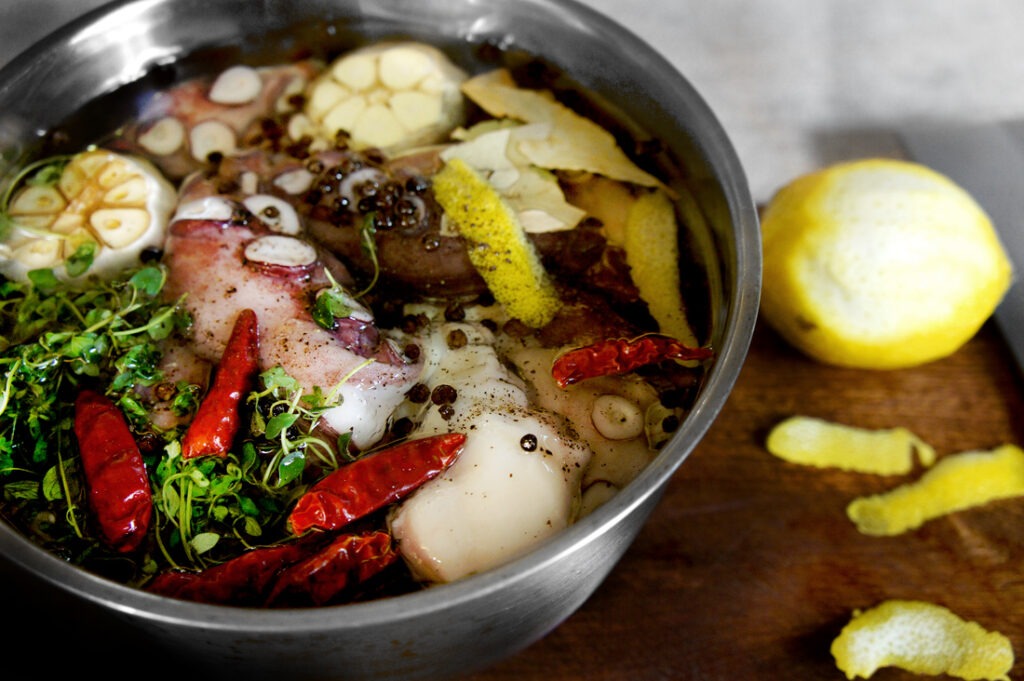 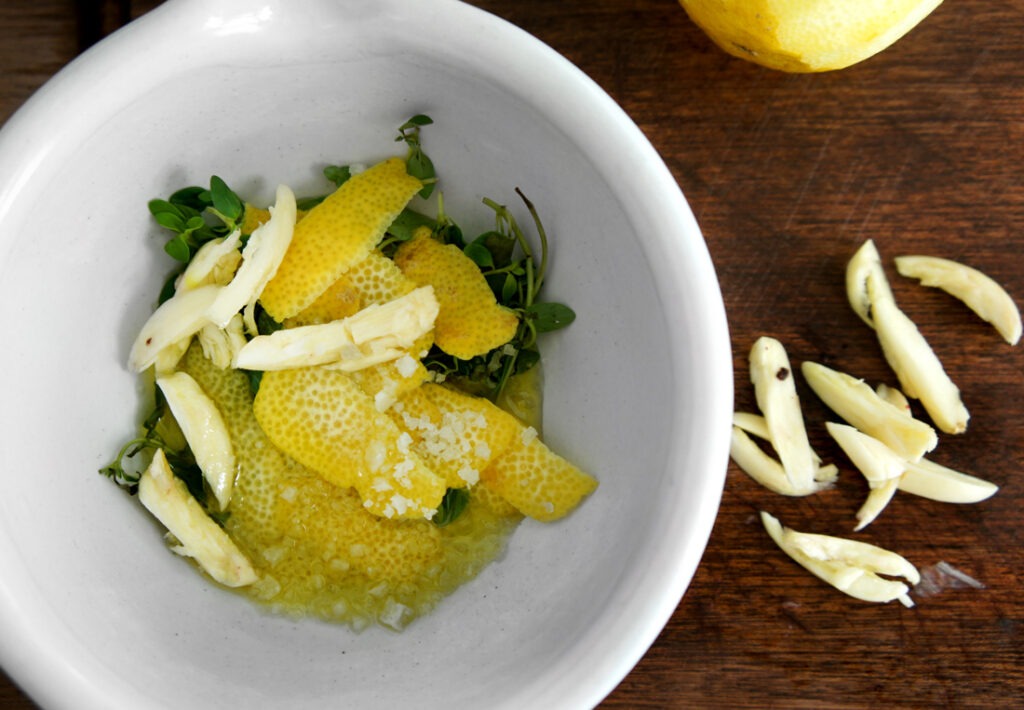 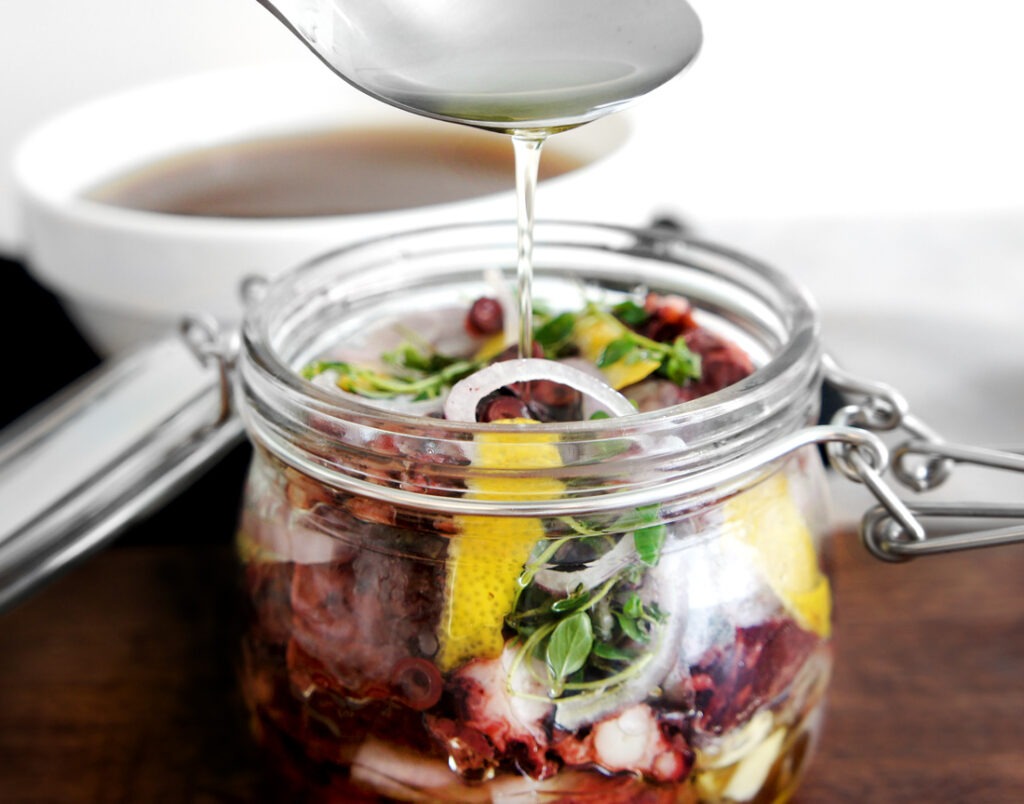 Take the pot out and fish out the tentacles, then drain the remaining liquid through a sieve.  The octopus should have emitted a lot of juice.  SAVE those juice!  It’s like… octopus stock!  Where the hell is anybody gonna be able to have  octopus stock around to make some delicious seafood risotto or paella?!

When the tentacles are cooled down, cut them in THICK slices.  Use a mortar to crush the garlics, thyme, lemon peels and shallots, then toss with the octopus slices.  Season with salt and pepper.

Pack everything relatively tight in an air-tight container and fill it with extra virgin olive oil.  Marinate in the fridge for at least 1 day.  GREAT finger food for a hot summer afternoon. 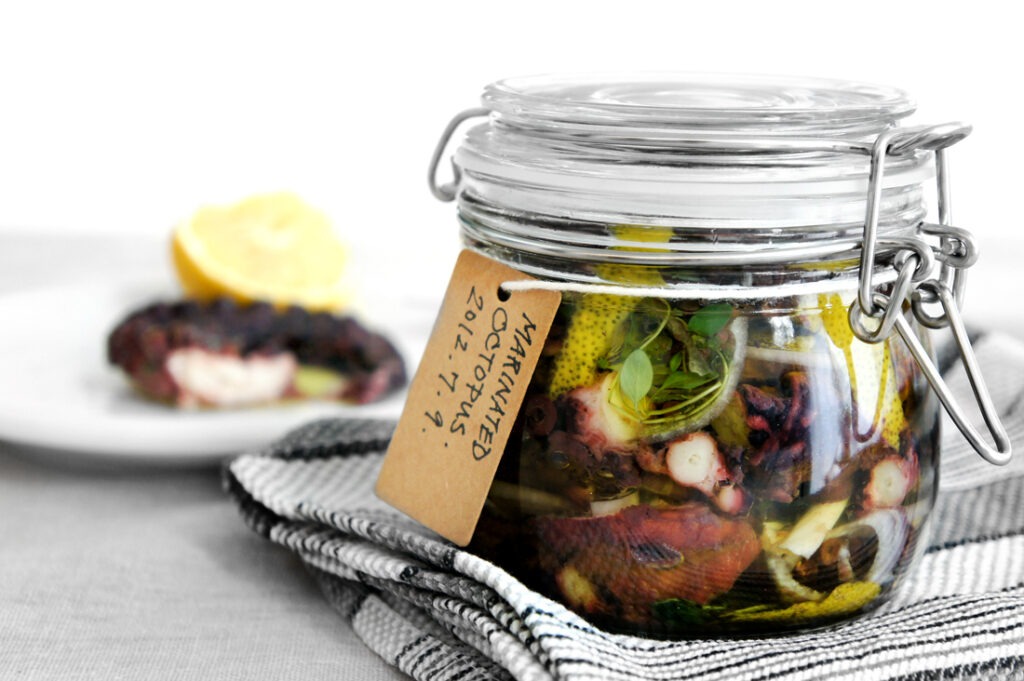 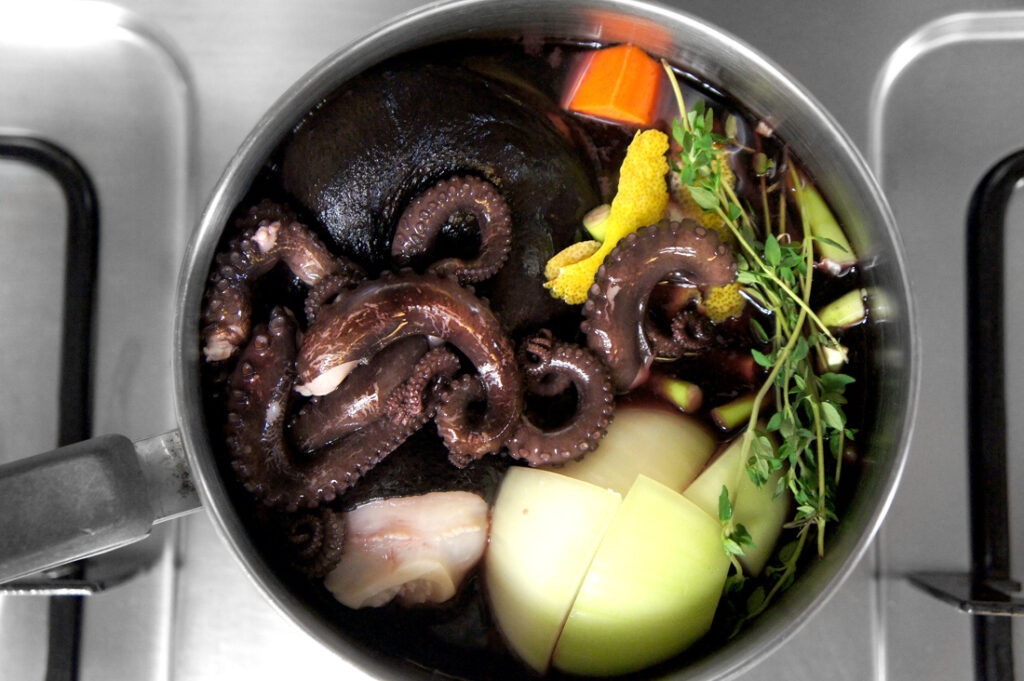 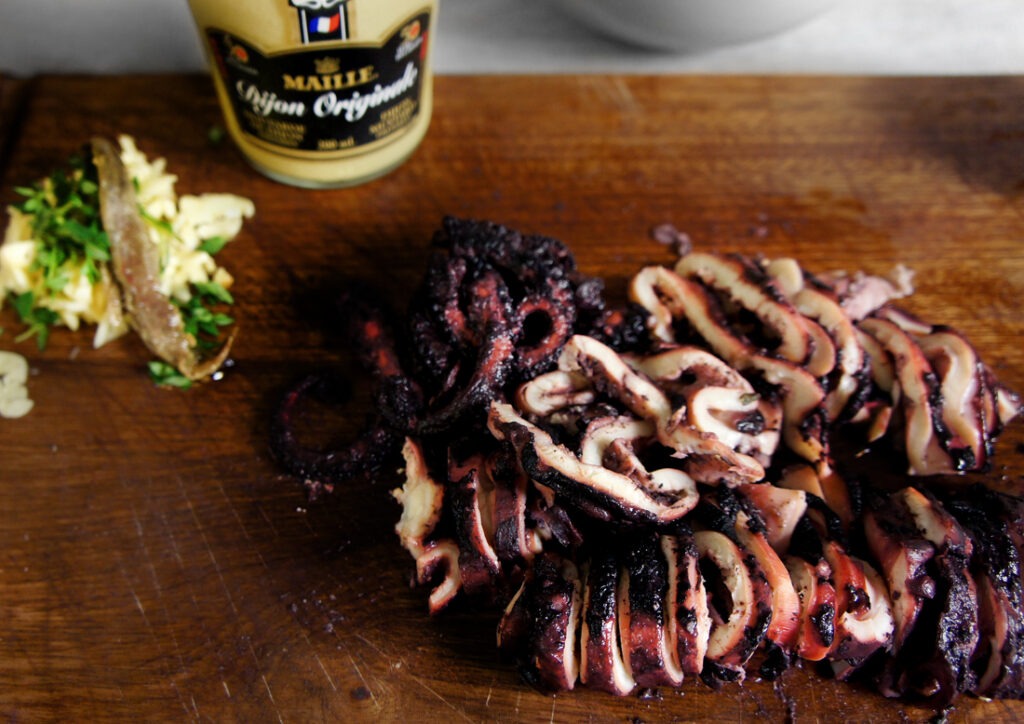 Clean out the insides of the octopus.  There’s the “beak”, the guts and whatever things that looks and feels like organs.  Leave the octopus in a clean kitchen sink, then bring a pot of water to boil and pour over the octopus and tentacle tips.  They will shrink a little.

Then place every ingredients in a pot with just enough red wine to almost cover.  Bring to a simmer and let it cook for 45 min.  TRY NOT to poke it, or stir it, or flip it around.  I find the less it’s messed it, the better it looks when it’s done cooking…  So after 45 min, the octopus should be tender (if not, cook for another 15 min).  Pick out the octopus and tentacles and drain the liquid through a sieve. 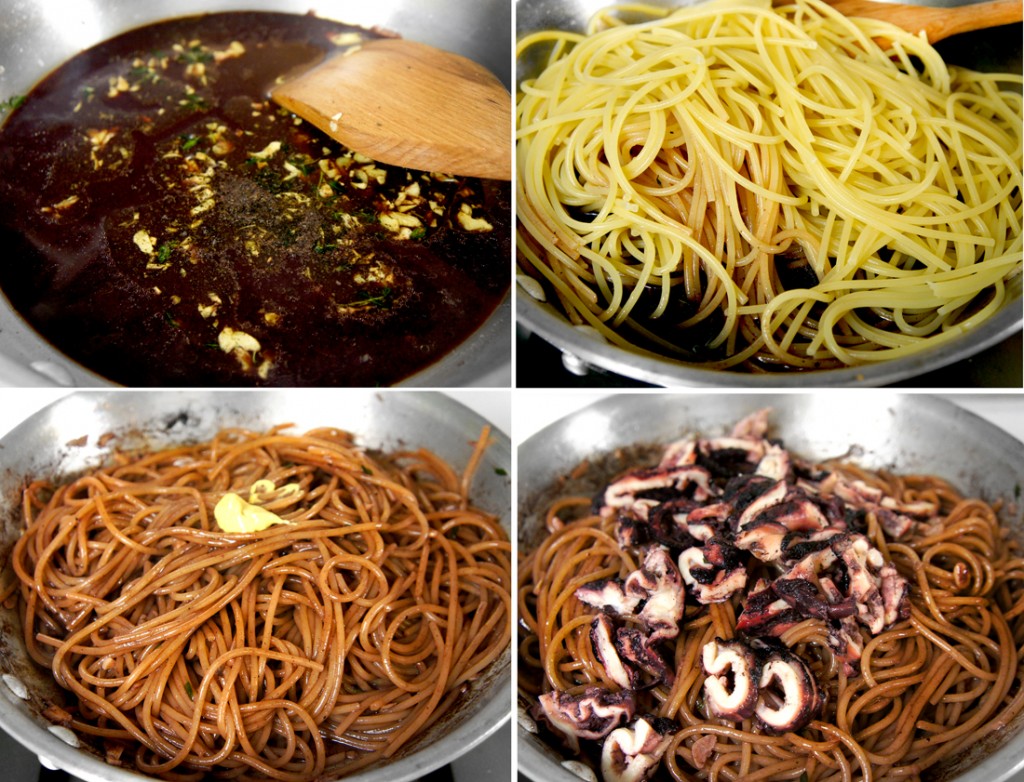 Bring a large pot of water to boil with a big pinch of salt, and cook the spaghetti.  Meanwhile, in a large skillet, heat up 3 tbsp of extra virgin olive oil and fry the anchovy, garlic,  thyme and a few turns of freshly cracked black pepper.  I’ve mentioned many times before that the thyme should “POP” in the oil to release fragrance.  If it’s not popping, the oil is not hot enough.  Before the garlic gets burnt, add the red-wine-braising-liquid and bring to a simmer.

Check the done-ness of the pasta.  It should be only cooked HALF-WAY!!  NOT AL DANTE.  It will finish cooking in the red wine liquid and soak up all that juice and the beautiful color!  So transfer the spaghetti into the skillet and toss.  Let the pasta finish cooking in the liquid on medium heat.  If the pasta is still not cooked through even after the liquid has been absorbed, add more red wine BUT MAKE SURE to let all the alcohol get cooked off, and all the liquid absorbed again.  Slice the octopus and combine it with the spaghetti.

Adjust seasoning with salt and pepper.  Add the Dijon mustard and toss evenly.  Squeeze  a bit of lemon juice and drizzle of extra virgin olive oil.  Serve with garlic aïoli. 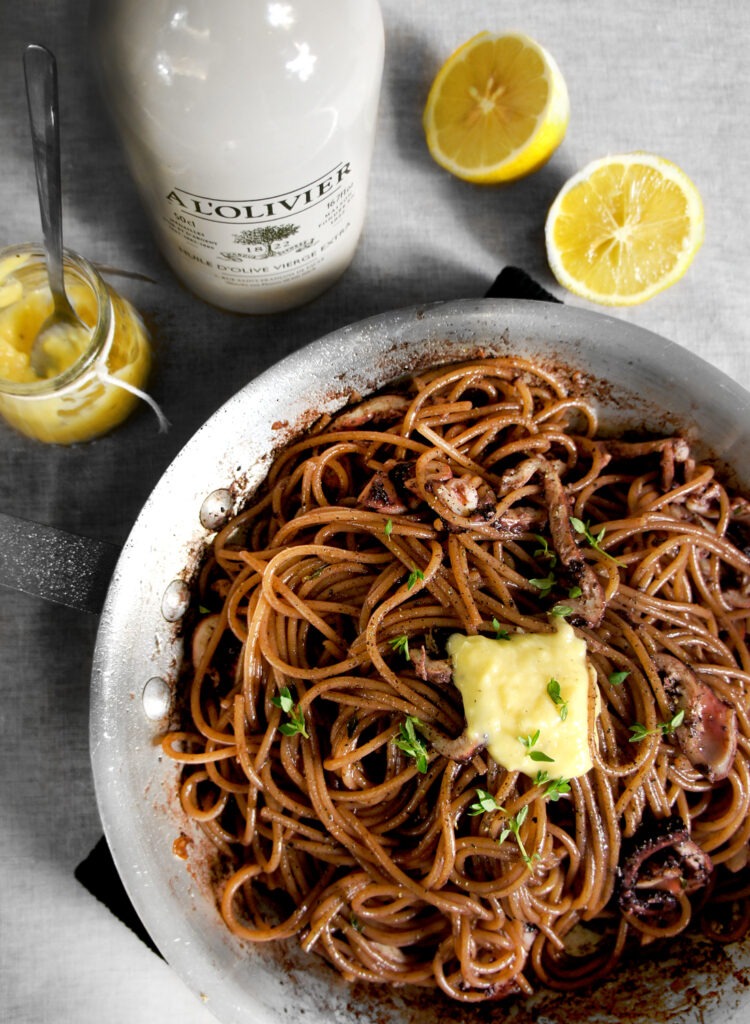 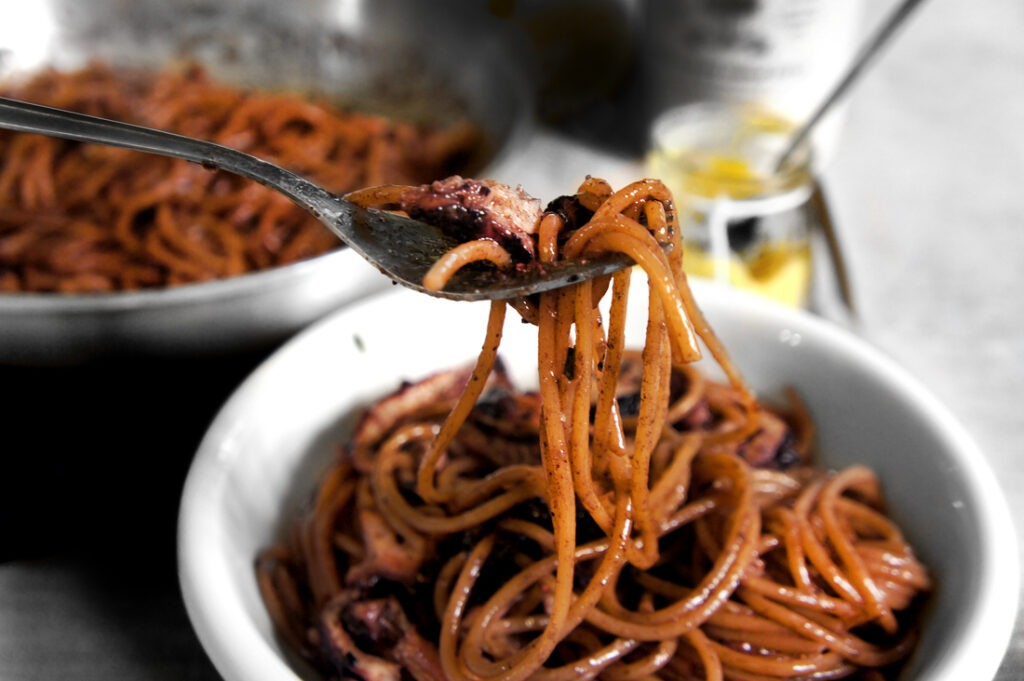