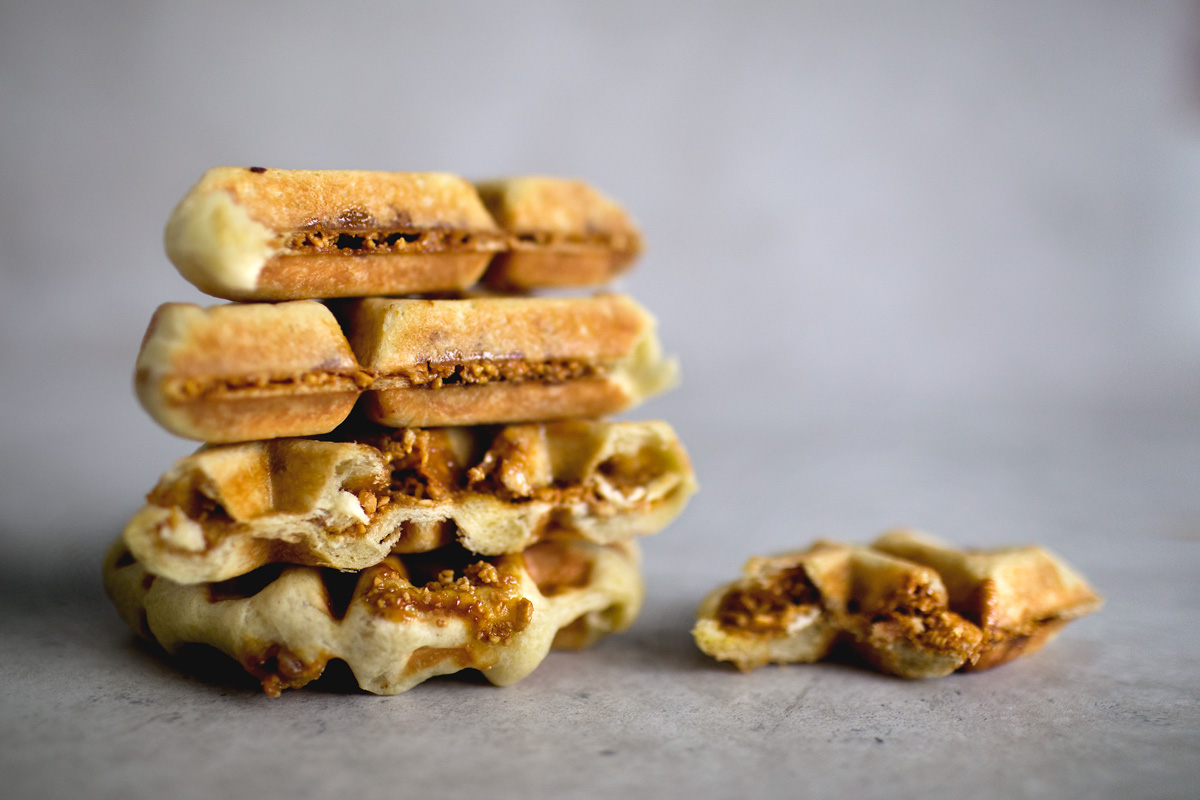 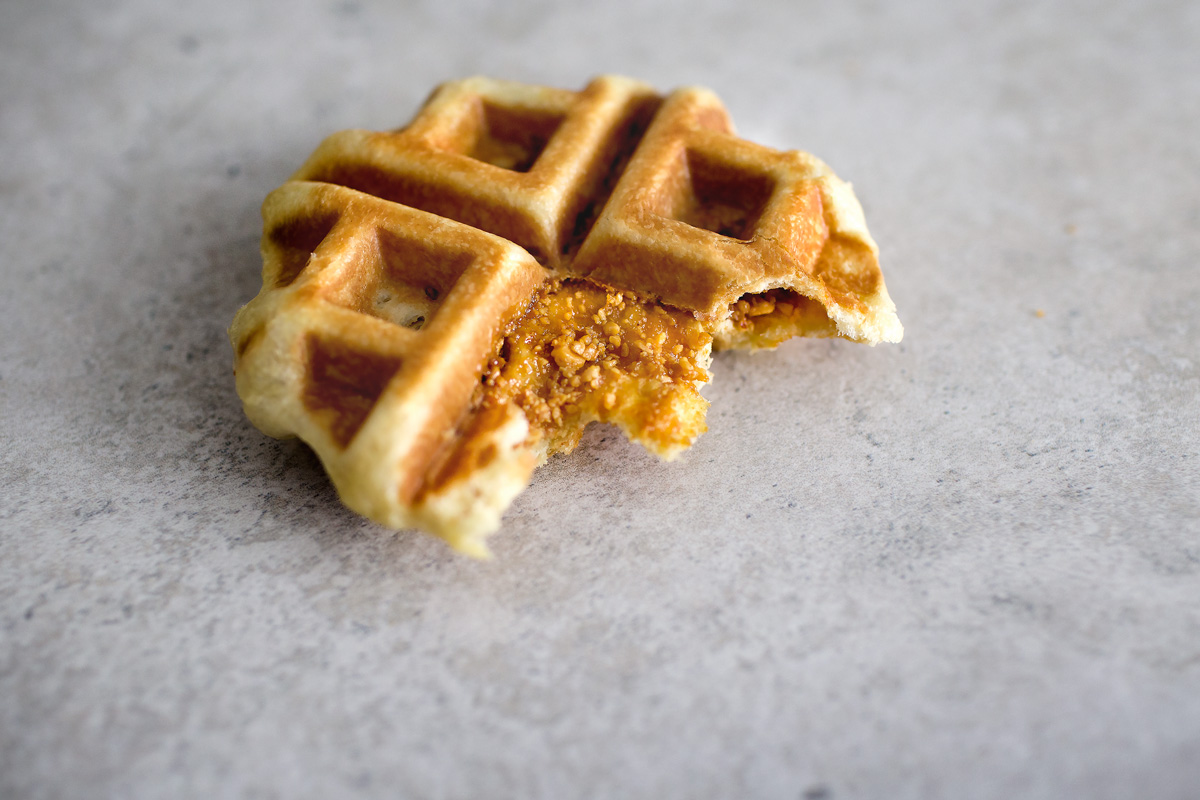 THEY MELTED… THEY BUBBLED… THEN THEY GOT ABSORBED IN THE SWELLING CUSHIONS OF THE CRISPY EDGED, SOFT HEARTED, BUTTERY AND CHEWY BRIOCHE WAFFLES 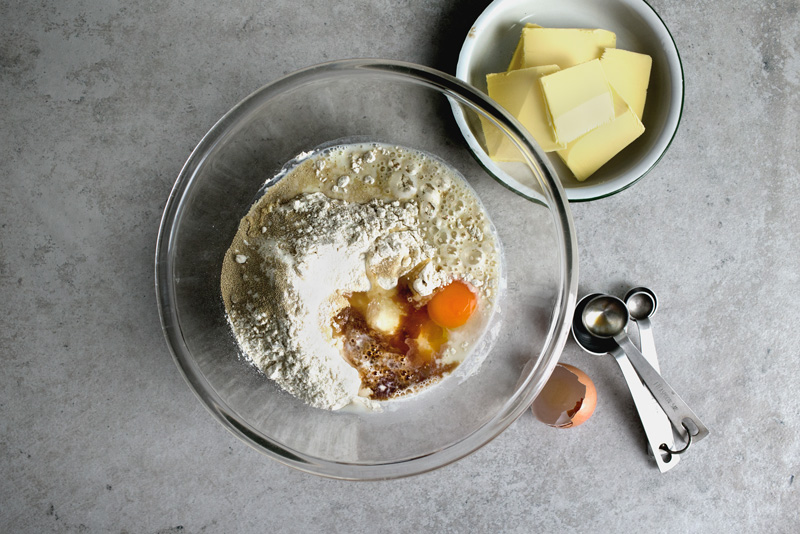 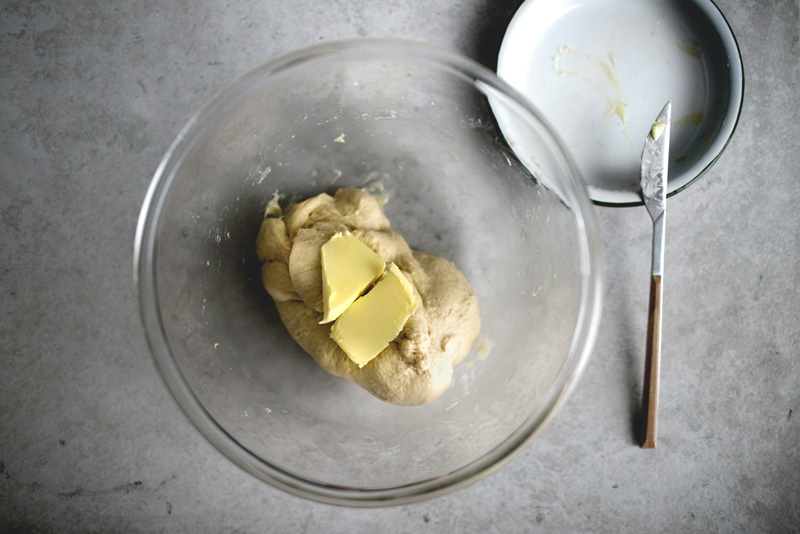 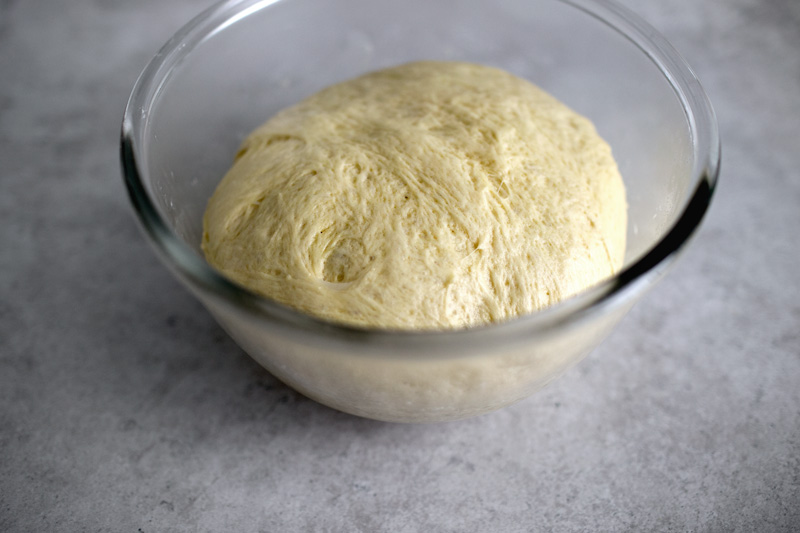 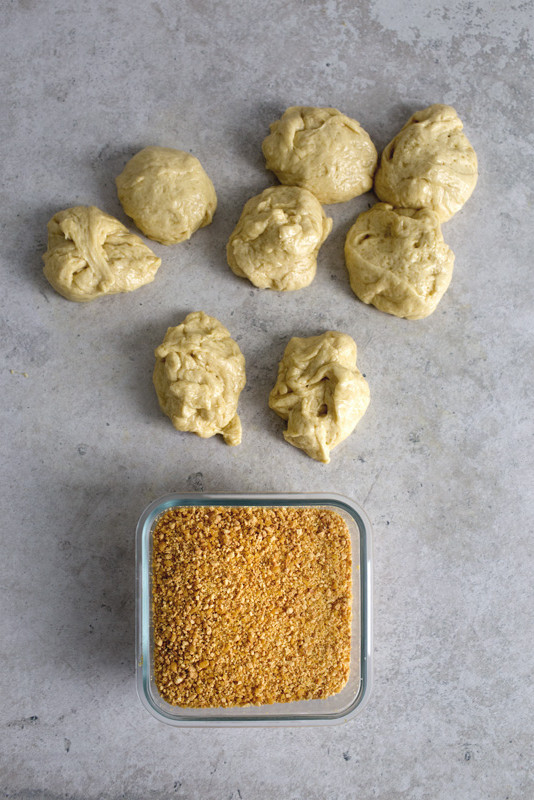 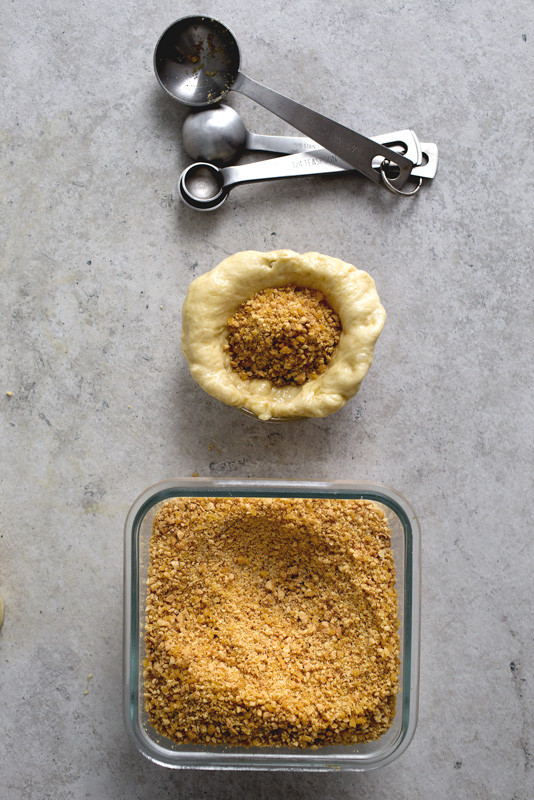 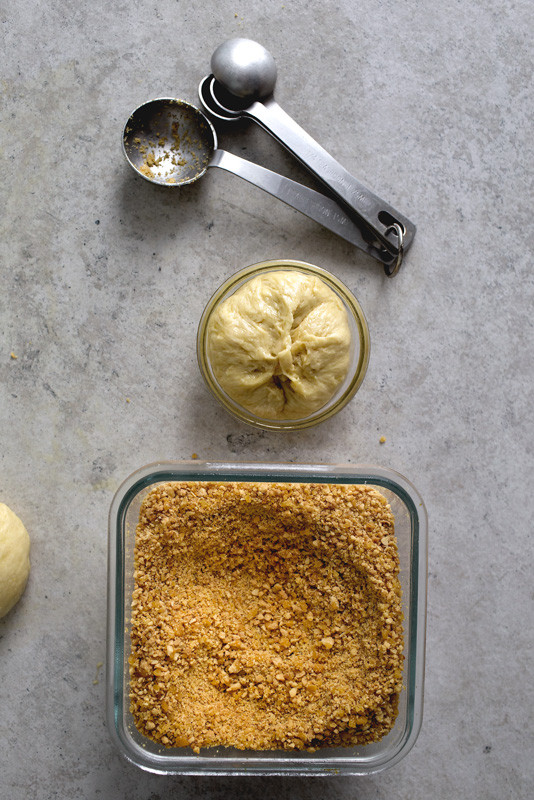 You know how like in the movies, when they really want to make you feel sorry for a certain character, let it be the sweetest human being or the most hated villain, doesn’t matter, that all they have to do is to show you a scene where he/she comes home to a dimly lit kitchen, where his/her inner loneliness get stripped naked in front of an even emptier fridge?  Yes, empty fridge.  What is it about an empty fridge that so tenderly strokes our sympathy?  I mean that trick works every time.  I mean, even the most stone-hearted audiences would feel something, must feel something, if they see… I don’t know, Darth Vader, after slaughtering a whole village of Ewoks, comes back to his space-chamber behind closed doors, and starts eating a half-empty jar of mustard with stale crackers (with that labored breathing oh god I’m gonna cry…).  I mean, that shit is just sad.

But lately, I’m starting to feel the opposite about my fridge.

I think, no, I believe, that if I were to take a photo from the inside of my fridge at any given moment in the past several months, it would probably strike a close resemblance of a jacuzzi pool, inside the Playboy’s Mansion, on a New Year’s Eve in the 80’s, right before countdown.  Or at the very least, the kind of chaotic and repulsive glut that I would imagine it to be…  There had been clearly some management issues, I admit.  It had gotten to a point where I actually cracked an egg with just my index finger, in the failed effort to rest it in between a head of cabbage and a jar of peanut butter, which sat on top a pot of stew next to 3 bags of kimchi.  I mean, it’s not the same kind of sadness, but this shit is just as bad.

So yesterday, I had to do something.  I committed what I would call, an inventory genocide, where I killed half of the population inside my fridge, ruthlessly, purely based on the justification of… well, illogical madness.  Anything that I couldn’t remember who or what or when or how it got here, or simply because it looked at me the wrong way, must go.  Just 5 minutes in, I could already see a ray of the fridge-light breaking through a cloud of blackened asparagus.  But just when I was red-eyed amidst my efficient bloodbath, I reached deep down to a corner of the fridge, and something stopped me dead on my track.

A box of forgotten but pristinely delicious, ground peanut brittle from the making of this.  I couldn’t… I just couldn’t bring myself to do it.  It looked so innocent, so sinless, in fact, completely filled with scrumptious roasted peanut flavours and practically, did I mention, ground salted caramels!  What kind soulless human being would I be if I put ground salted caramel to sleep!?  I must figure out a way to do them justice… and in a way, looking back now, I think that I have always known what it would be, the most buttery brioche waffle I have been wanting to sink my fingers in for quite some time now.  They call it, the liège waffles, the Belgian waffles, the yeasted dough practically drowned in butter then strangled with pearl sugar, browned and melted in between the searing teeth of a hot waffle-griddle, and it sounded just like the beautiful, alternative death for my well deserved victim.  I mean, what is a pile of ground roasted peanuts and crushed salted caramel, but the perfect brioche stuffing?

They melted… they bubbled… then they got absorbed into the swelling cushions of the crispy edged, soft hearted, buttery and chewy brioche waffles, while the rest of the undeserving fridge-scraps watched, howling in jealousy.  Not a bad way to go… not a bad way to go at all. 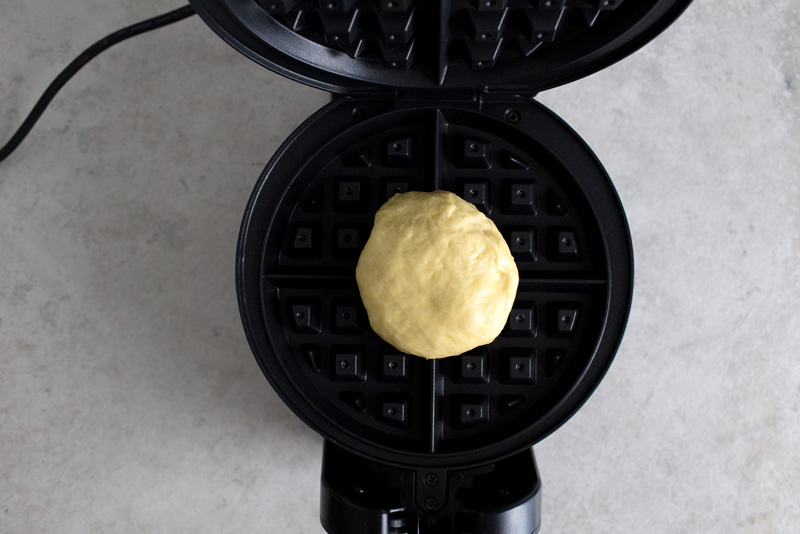 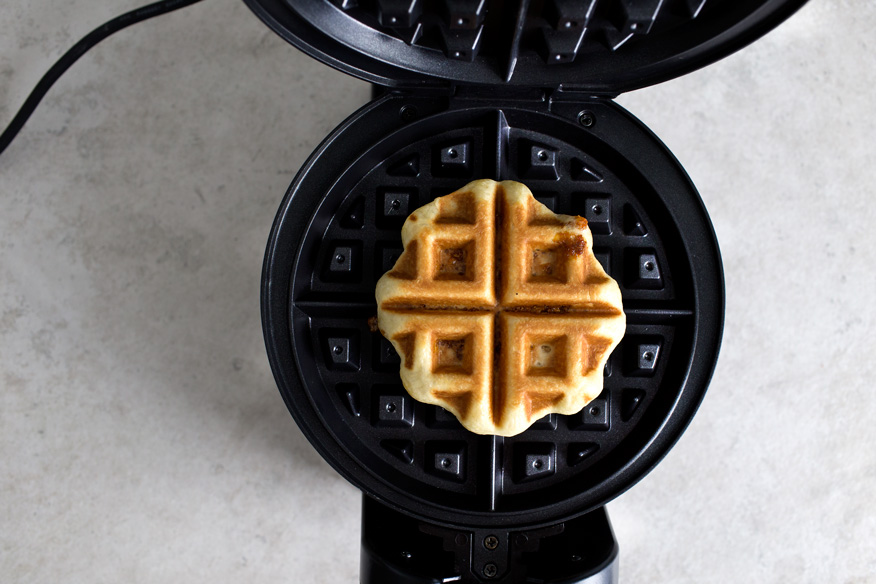 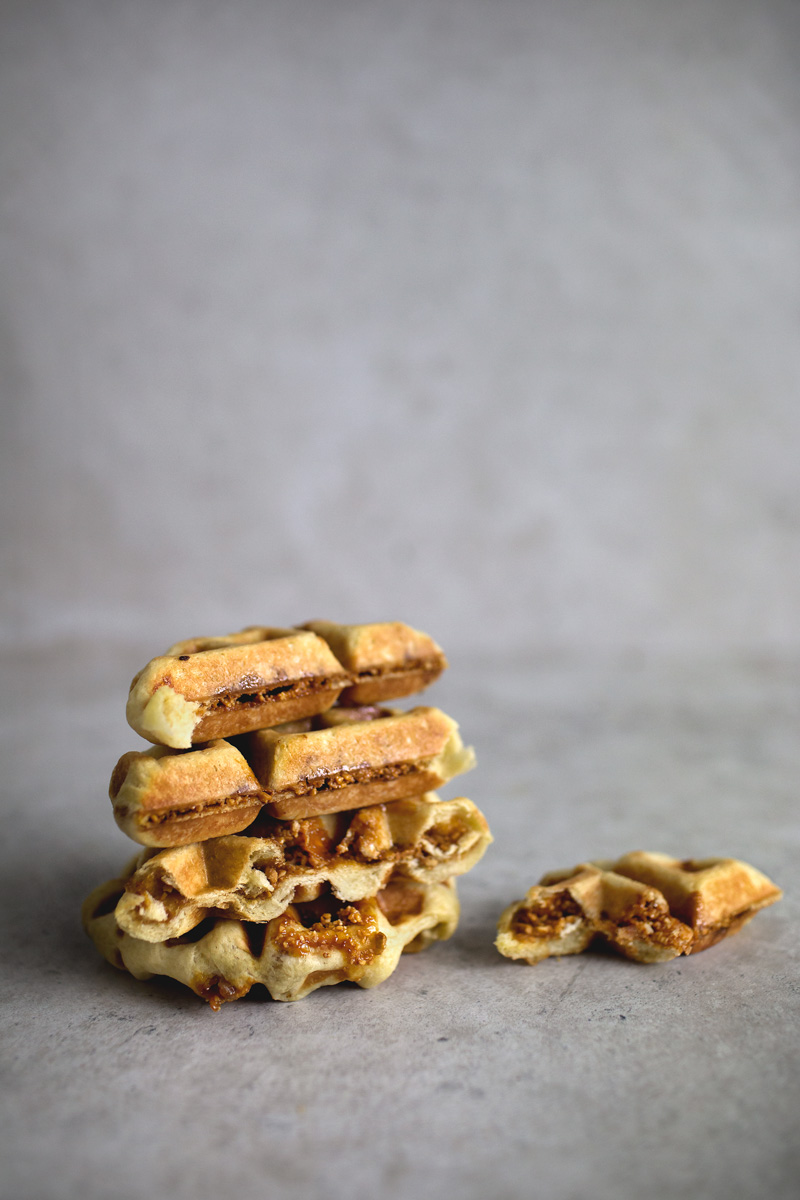 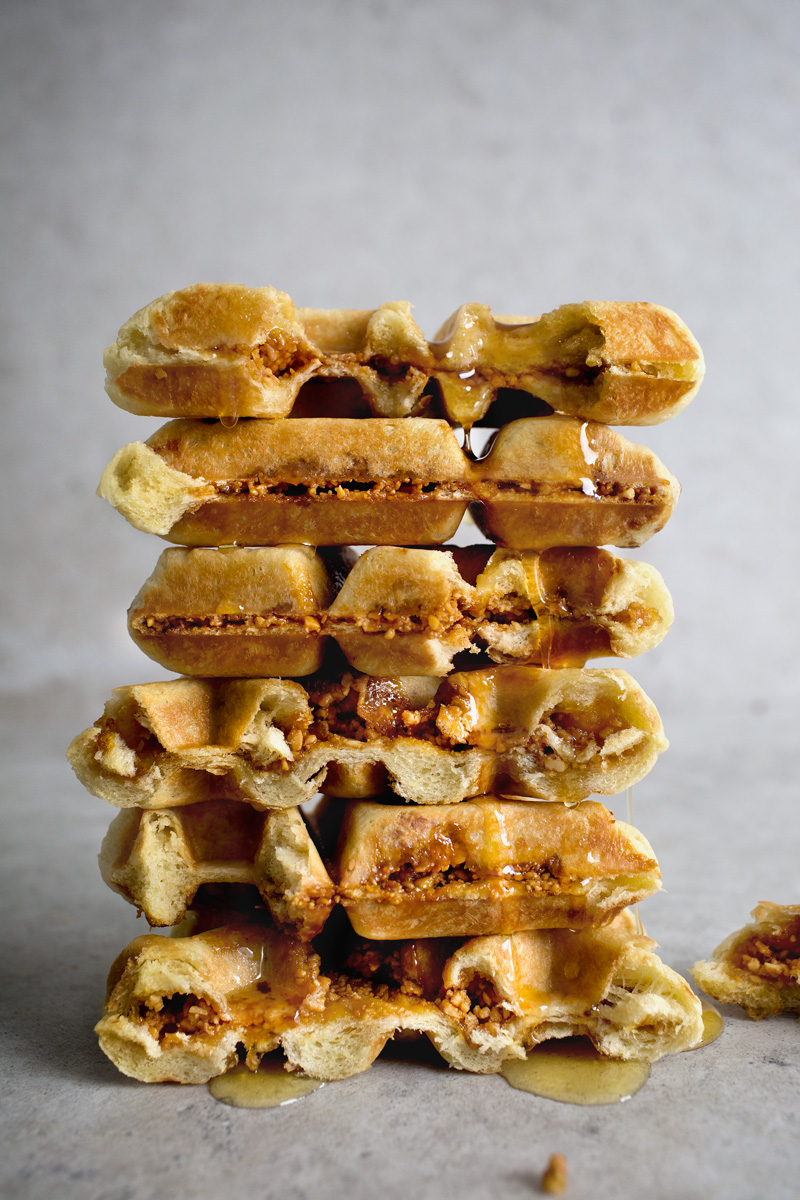 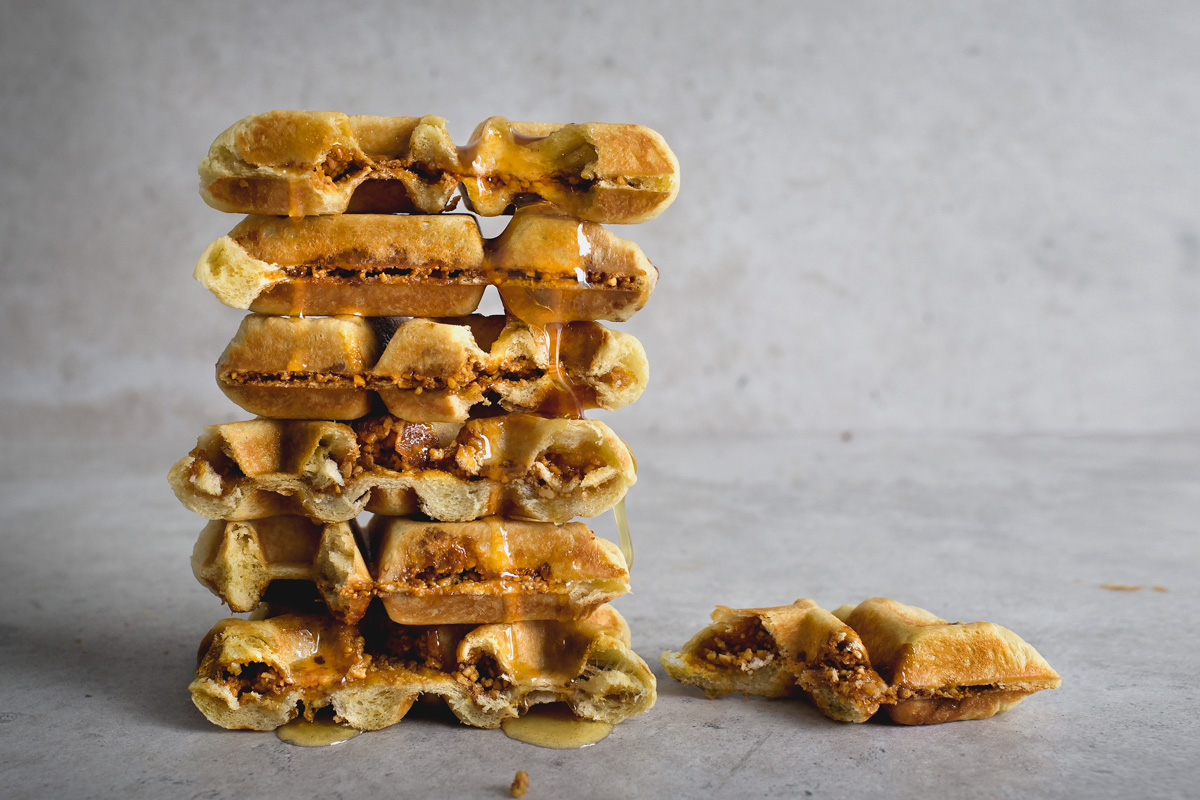