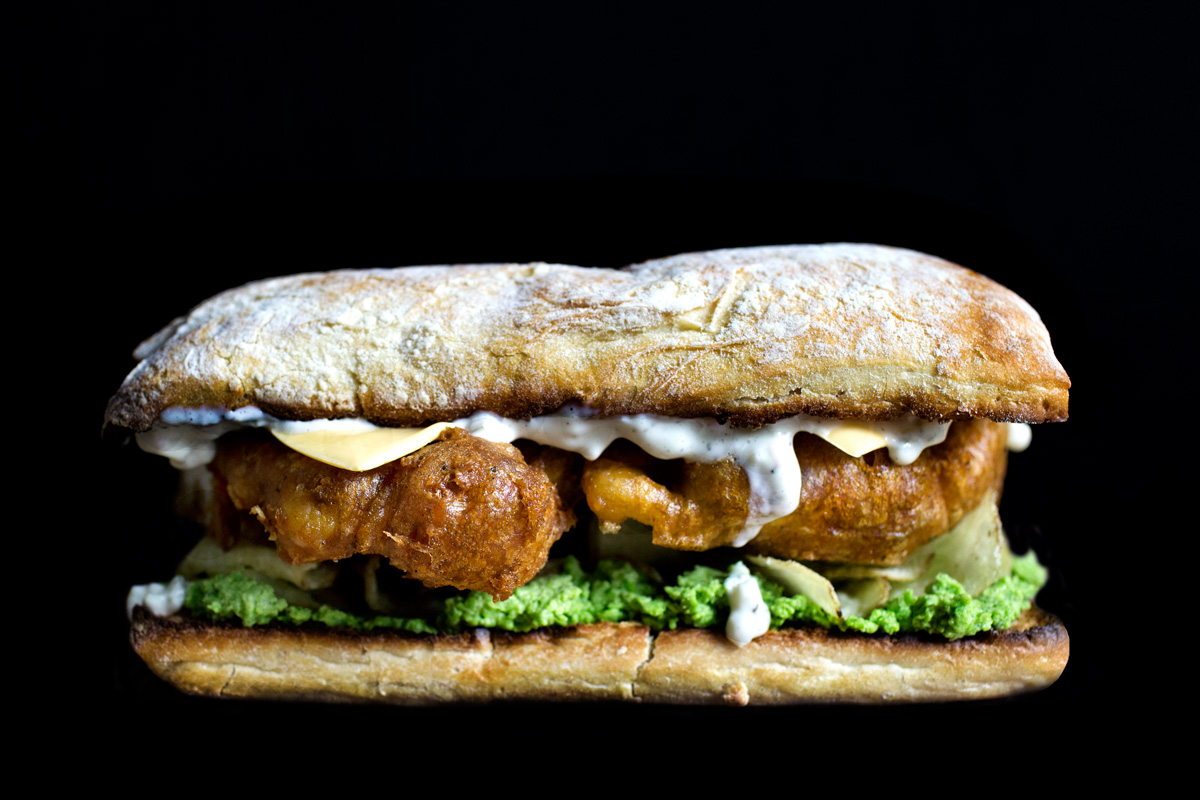 SOMEWHERE ALONG THE LINE OF LOSING CHILDHOOD INNOCENCE AND MATURING FOOD-PHOBIAS, I’VE GROWN ESTRANGED TO THIS WONDERFUL THING THAT PRACTICALLY RAISED ME

I’ve been wanting to do a fried fish sandwich for some time now.  In fact, it’s strange even to myself that it has taken me so long, considering that battered fried fish, from both the perspective of nostalgia and deliciousness, holds a very special place in my heart.

Myself, circa 1992, fresh off the boat in Vancouver and practically English-illiterate, this was one of the very first introduction I had into the then-completely-alien world of western food culture.  Once in a while, friends and families would make a special night out of dinning at the New England-style seafood restaurants lining the river-port, for this was a scarce enjoyment where we came from, and for me, watching the seagulls pirating scraps off of the table, it served a foreign exhilaration of this new place to call home.  Back then, with the inability to understand the menu, a dinner in a place like this would almost certainly meant having the same entree over and over again, and that was, yes, fish and chips.  A funny dish that, I was told, the child I was should really appreciate.  To be honest, I can’t really recall what the dish tasted like.  Eating, for who I was at the age 12, was not a priority in the purposes of life.  But the premise of those memories, the silhouette of those evenings, I will forever hold dear.  Then, perhaps taking the theory of all-kids-love-fried-fish a bit too far, for quite a while, my breakfasts were often times, if not persistently, fried fish-sticks that my mom homemade from the supermarket freezer-section, served with ketchup.  Now that, that I remember the taste of, and it tasted… delicious.  Diss it all you want, but it was like a bun-less and sauce-less filet-o-fish burger from McDonald’s which, to me, was and still is considered a very fine thing amongst others.  Hands down, for the first two decades of my life, it was (only marginally) the second-best thing from 6-pcs-of-nuggets.  If the completely illogical fear after adulthood doesn’t exist – that somehow it feels much safer to consume meats than seafoods from this fine American institution – nowadays I would’ve ordered the filet-o-fish over the cheese burger, at least twice as often.

So I guess, in short, what I’m trying to say is, that I’ve had my fair share of battered fried fish in my days growing up, and I loved it.  But somewhere along the line of losing childhood innocence and maturing food-phobias, I’ve grown estranged to this wonderful thing that practically raised me.  And so I guess, more simply put, I want it back.

To do so, I set out to create an ultimate sum of this significant chapter of my childhood dinning experiences, but, greater than its parts.  A sandwich that combines the classic elements of English beer-battered fish, sweet and tangy tartar sauce and herby butter-mashed peas, with the lunacy of sliced American cheese, and since I was already at the edge of a cliff, why not taking off with another layer of salt’n-vinegar potato chips in between to bring an extra element of crunch?  An idea so wrong, that I was about to write-off with self-doubt right before a dear Instagramer from a little town known as, the Great Britain, left a comment.  People here like putting “crisps” in their fish finger “sarnies”!, she said.  Aside from the unexplained urge to forever call “sandwiches” as “sarnies” from now on, that also brought the much needed endorsement for my madness.  It is done.  After all, with what is both the home of fish’n chips, and the founding father of the establishment of sandwiches, who the hell am I to argue?

And thus, we arrive at this conclusion, one that even my 12-year-old-self would’ve assumed, well that can’t taste bad.  And my friends, I was right to assume. 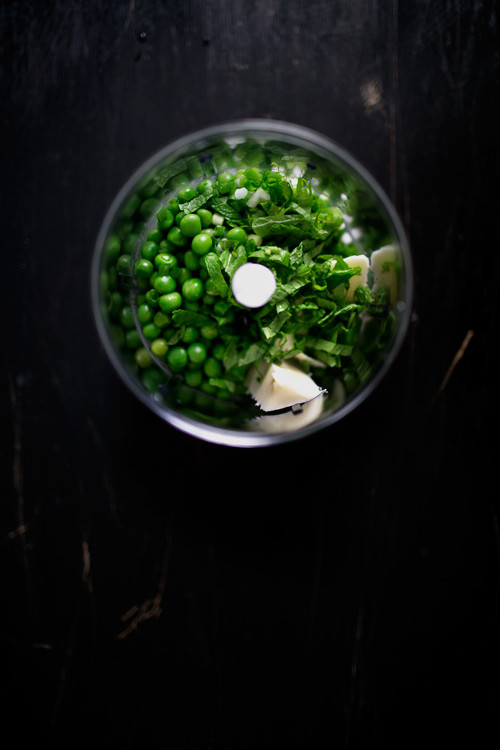 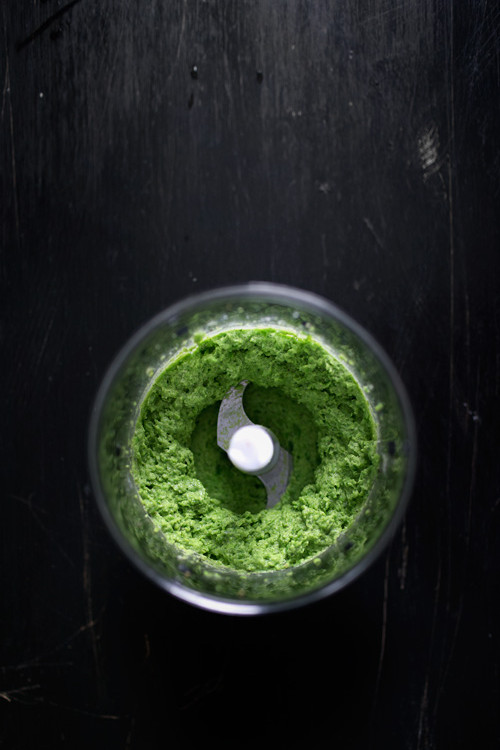 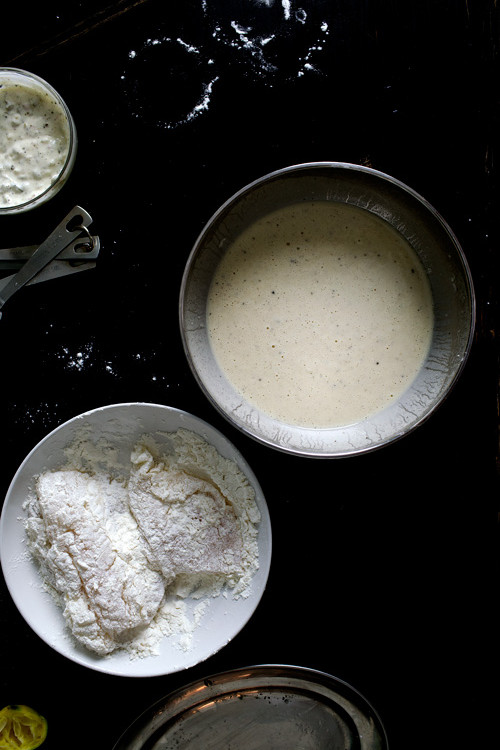 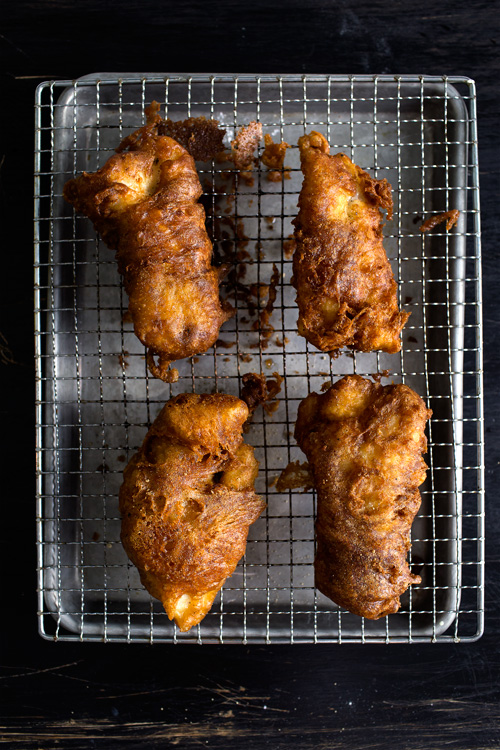 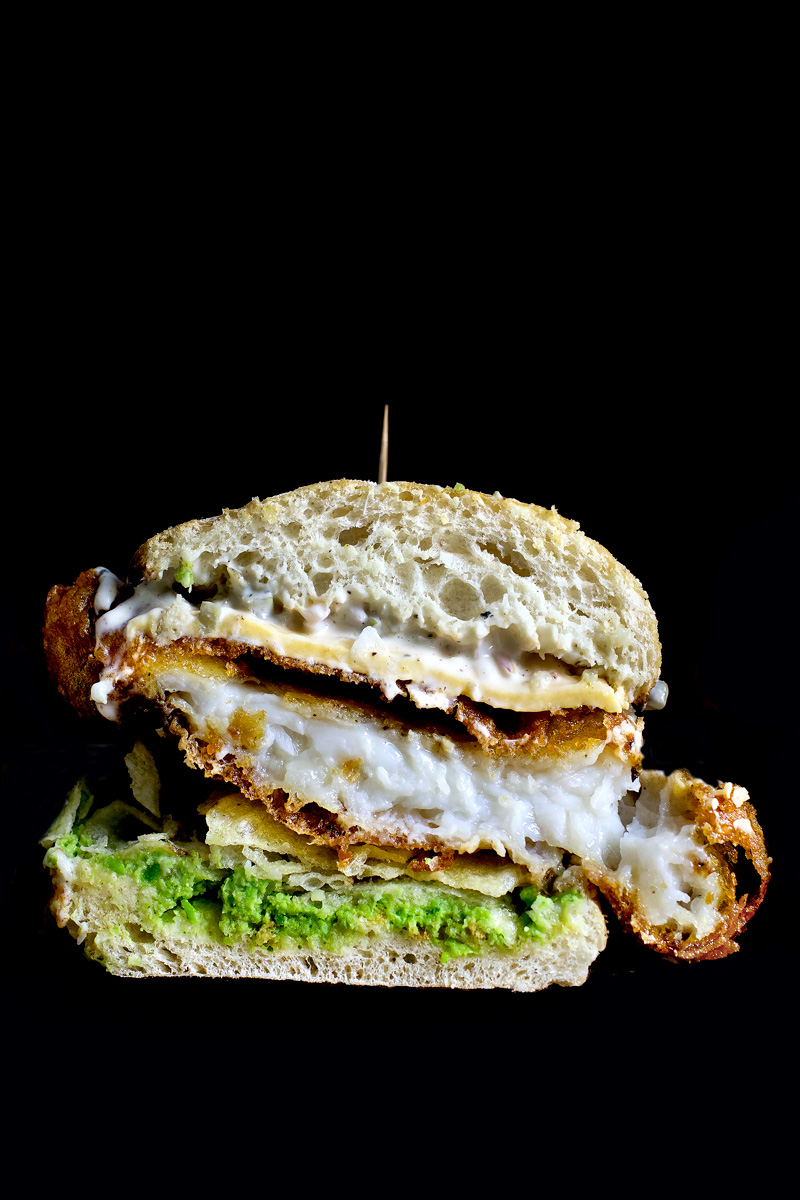 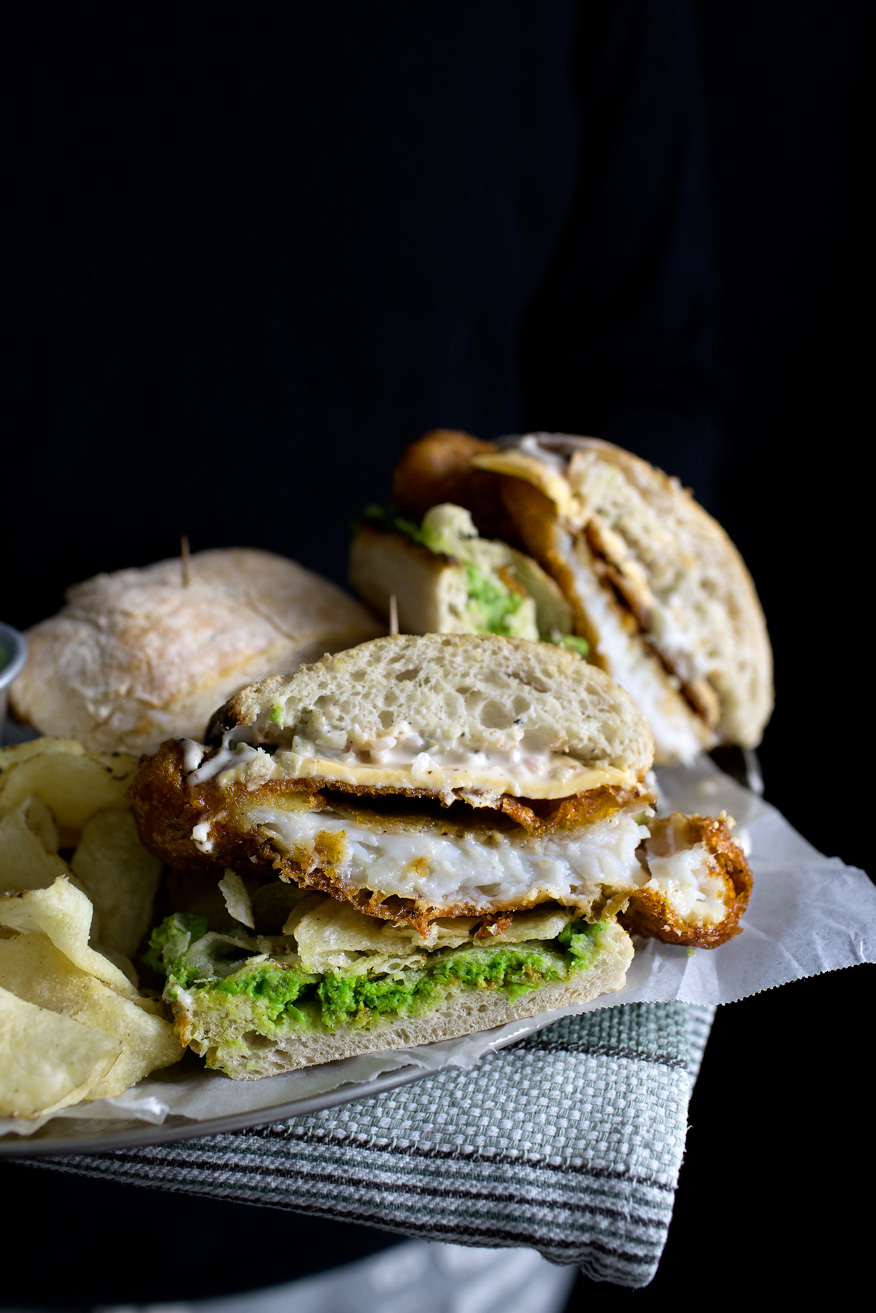 If you're really not fond of frying, you can substitute with pan-fried fish fillet breaded with breadcrumbs. 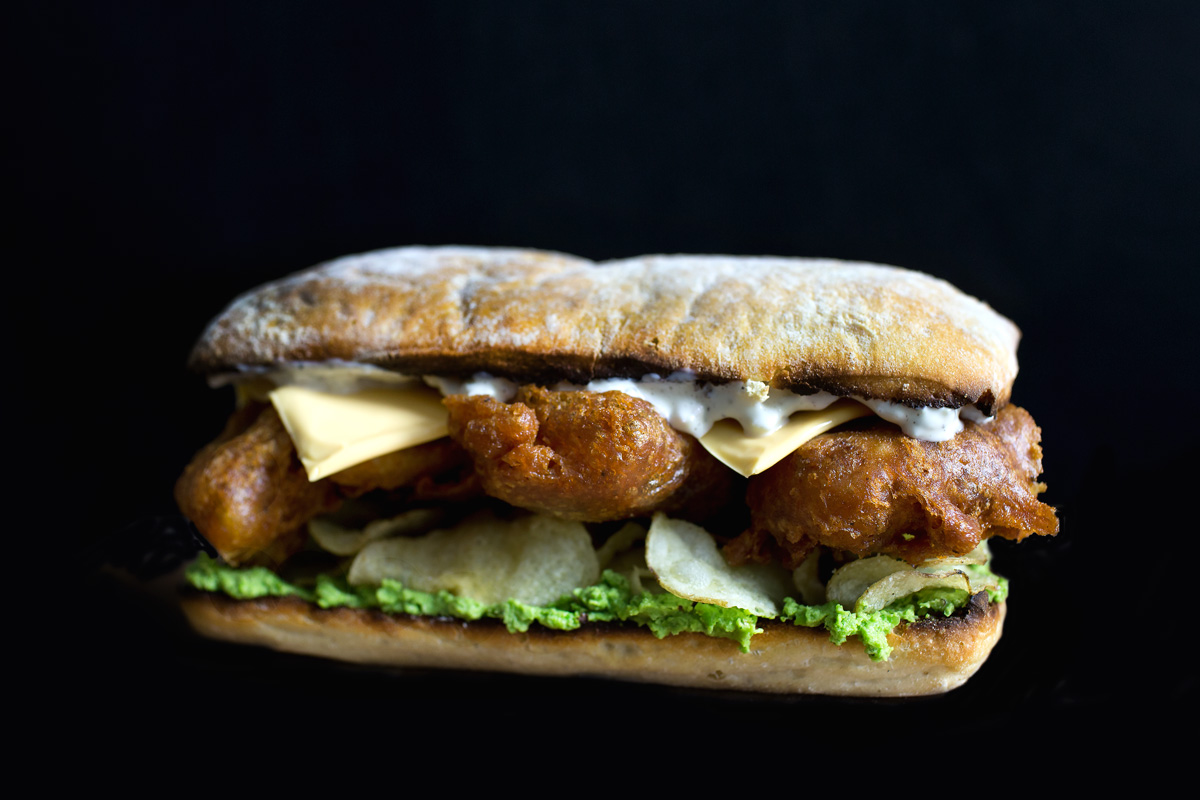 Paris, Where Have You Been All My Life?
Scallion Oil Chicken
How to make perfectly butterflied and crispy skillet chicken