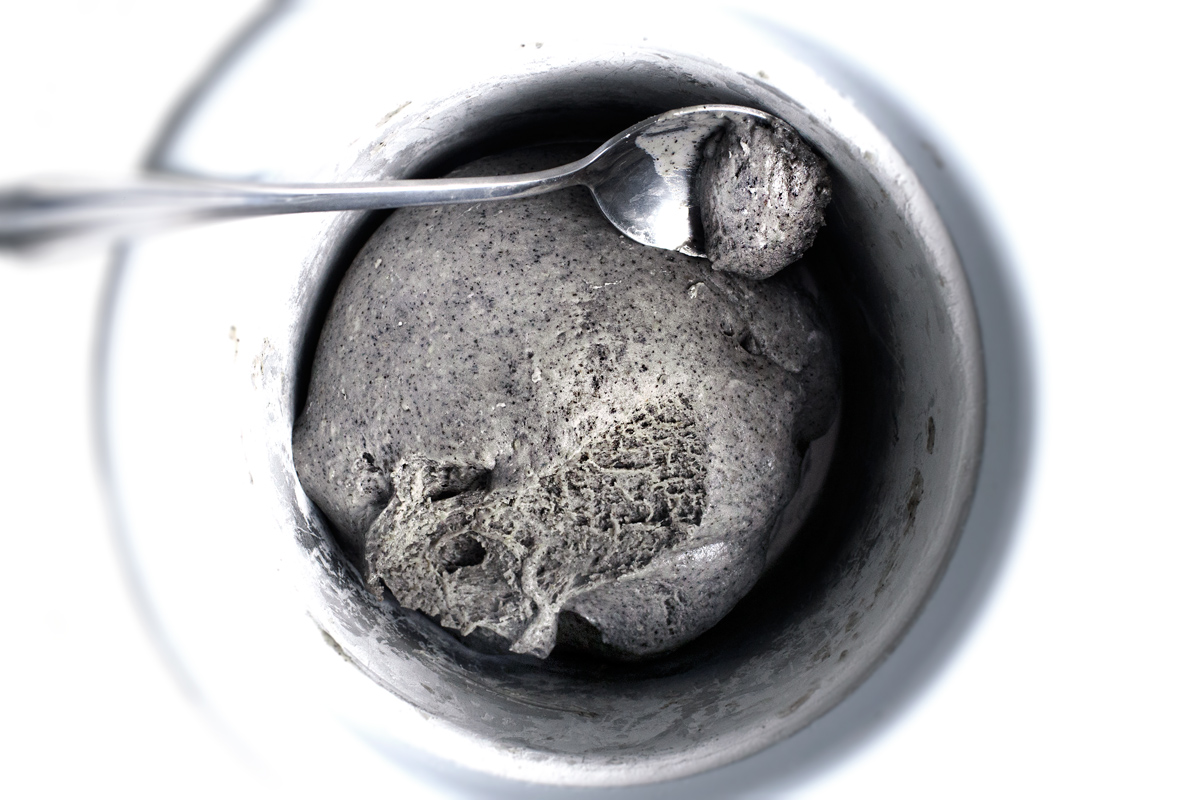 THERE IS AN UNUSUAL STURDINESS AND BOUNCINESS TO EACH BITE, AND DEEP NUTTINESS WITH EACH MELTING CHEWS

So, congratulations!  Wow, new baby huh?  I mean.. just.. WOW!  Ayee-um… Mandy, by the way.  Here, um, I sort of acted late on that race to the gift-registry and so I swear all I was left to choose with, was this leopard-print breasts-pump and a strange vampire binky…  But seriously, I swear, I am not weird.  Nor am I some random neighbour who’s trying to crash a party because she saw the sign “there will be cakes” on your lawn on her way to taking out the trash.  Really, I was invited.  But the truth is, you probably don’t know much about me.  And I guess the fact that this being a baby-shower and all, probably one of the top three must-be-perv-free environment there is (among dressing-rooms, toilets and etc…) , I should re-introduce myself a little bit.

My last name is Lee, with my birth-Chinese-name, Huei Lin.  When I was 11, in the month before my family immigrated from Taiwan to Canada, I picked out my own English first name, Mandy, from an English Names Guidebook that some idiot gave me.  It was probably one of the most regrettable mistake of my life, one that I now have to live with until I die.  I’m one of those whom you would call a “dog person” much more than a “people person”.  I don’t care who or how many people die in a movie as long as the dog lives, and which-ever movie violates that rule, sucks.  I Am Legend, sucks.  But having said that, if you actually knew me, I’m a good friend.  An overbearingly judgemental friend you might add, but that’s only because I think I care.  My favourite things in life are puppies’ tummies, eating, travelling for eating, eating with friends, last but not least, good conversations over eating.  I think whoever asks the question “what’s your favourite food?”, hates eating.  I don’t have a favourite food, because there’s too many that it can only be defined by categories.  Categories such as, carbohydrates, and proteins.  Vegetables… I don’t wanna talk about it.

But perhaps, the most important food-category of all that defines my entire existence, that trumps all other subordinate pleasures in life except for maybe rubbing a puppy’s tummy, so much so that I may not be able to friend you if you disagree… is anything and everything that could be described with the word – chewy.  Chewy is my Holy Grail on my culinary treasure-hunt, my kitchen baby unicorn, my ambassador of quan.  Chewy, completes me (and no, Jerry Maguire, doesn’t suck).  I want it in my bread, my brownies, my donuts, my cookies, I want it in places that it doesn’t even belong, and yes yes yes, even in my ice creams.  So I guess it’s only appropriate, since we’re on a roll of getting to know each other and all, that I introduce you to this closeted kink of mine – my black sesame mochi ice cream.

It’s not entirely mochi.  It’s not really ice cream, either.  This black sesame-blended mixture is thickened with just enough sticky rice flour, in order to land on that sweet spot where it’s too loose to be called mochi at room-temperature, but hardens just right when it is frozen.  It has an incredible resistance to melting, an unusually sturdiness and bounciness to each bite, and a deep and rich nuttiness that fills the palette with each melting chews.  It is almost unlikely to find a peer for comparison…  Think of the densest, zero-air/ice-molecule ice cream you’ve ever had – this is way beyond that.  Think of Turkish ice cream – well now you’re getting close.  It’s the same kind of stretchy and springy texture that make this recipe impossible for a typical ice cream-churner, and hence, must be done by working your post-baby biceps.  I mean is it too considerate on my part that I even calculated in a terrific solution for that last pound of baby-weight you’re physically but not emotionally attached to?  I told you, I’m a good friend.

So hello Emily.  Congratulations again.  You won’t be able to return that leopard-print breasts-pump because my dog ate the receipt, but this black sesame mochi ice cream, will more than making up for it. 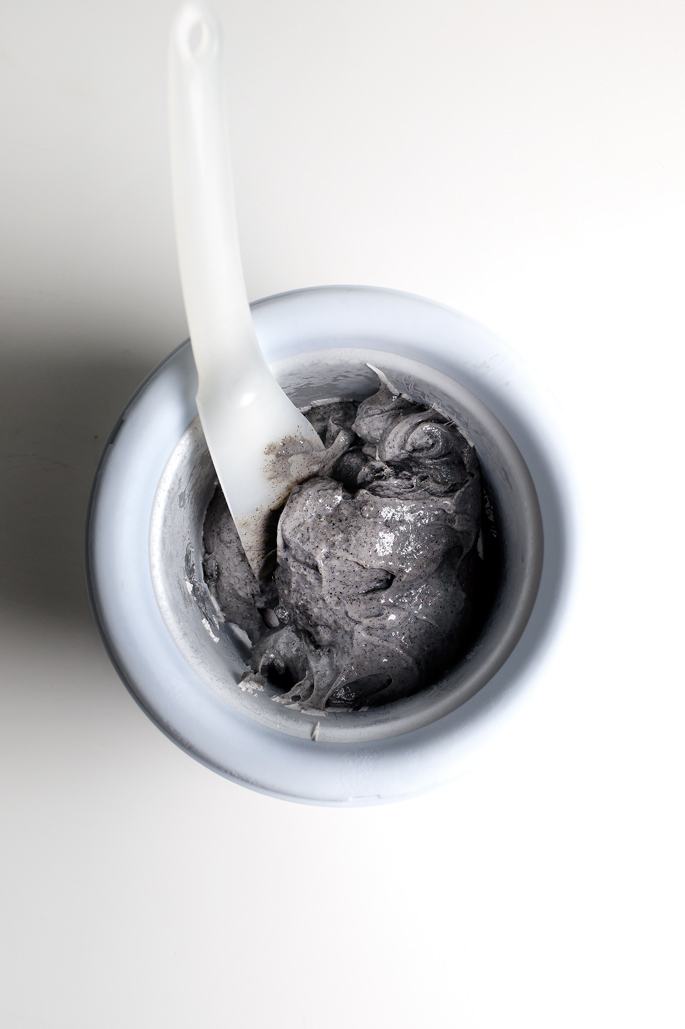 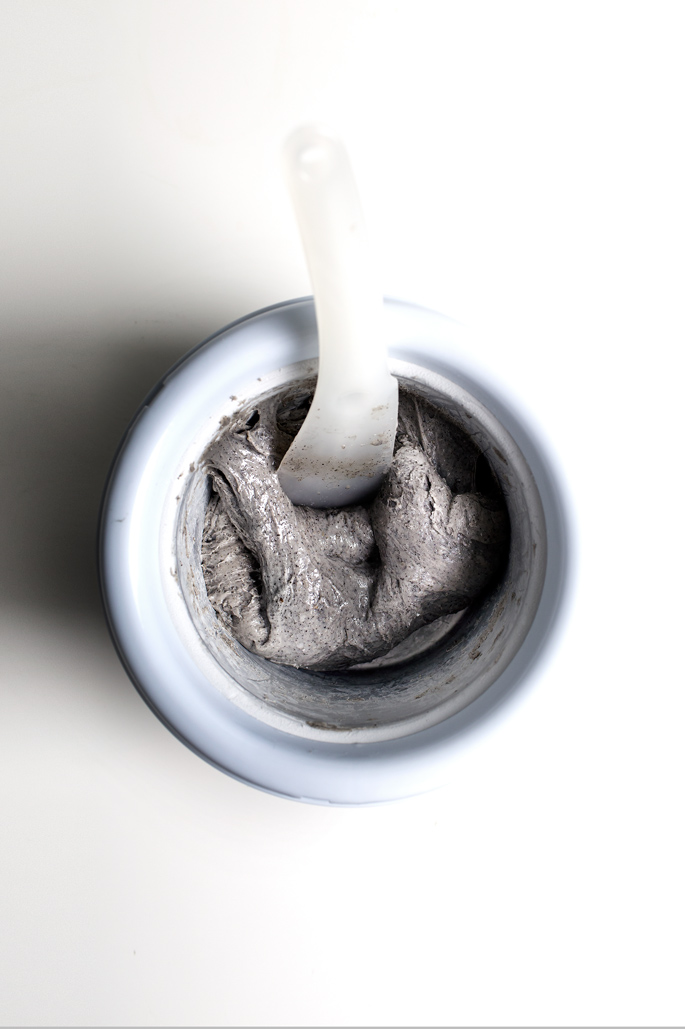 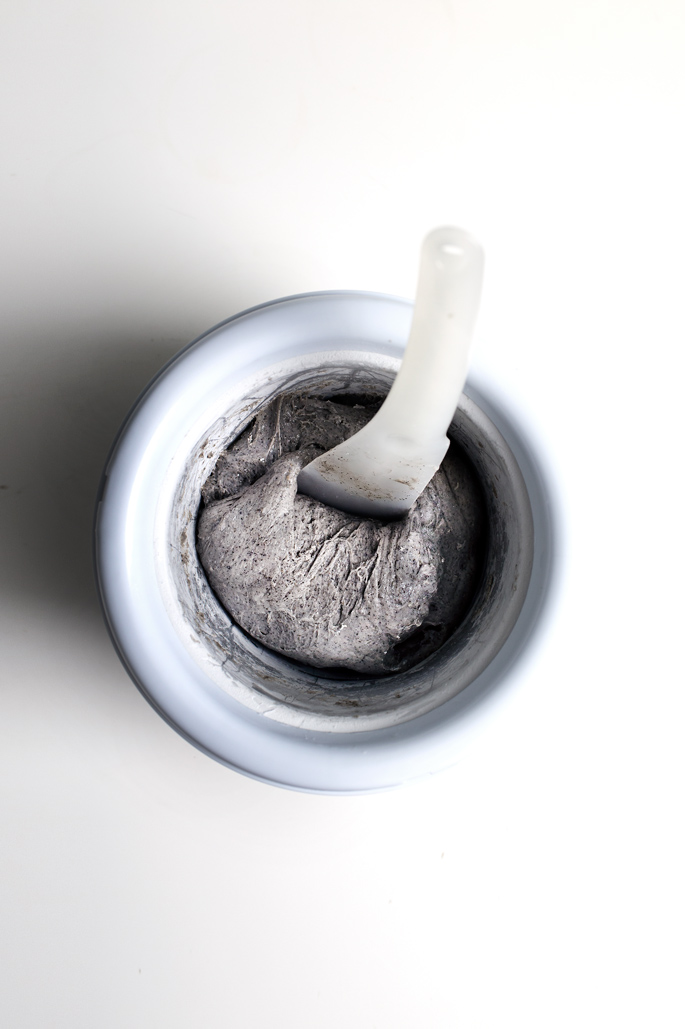 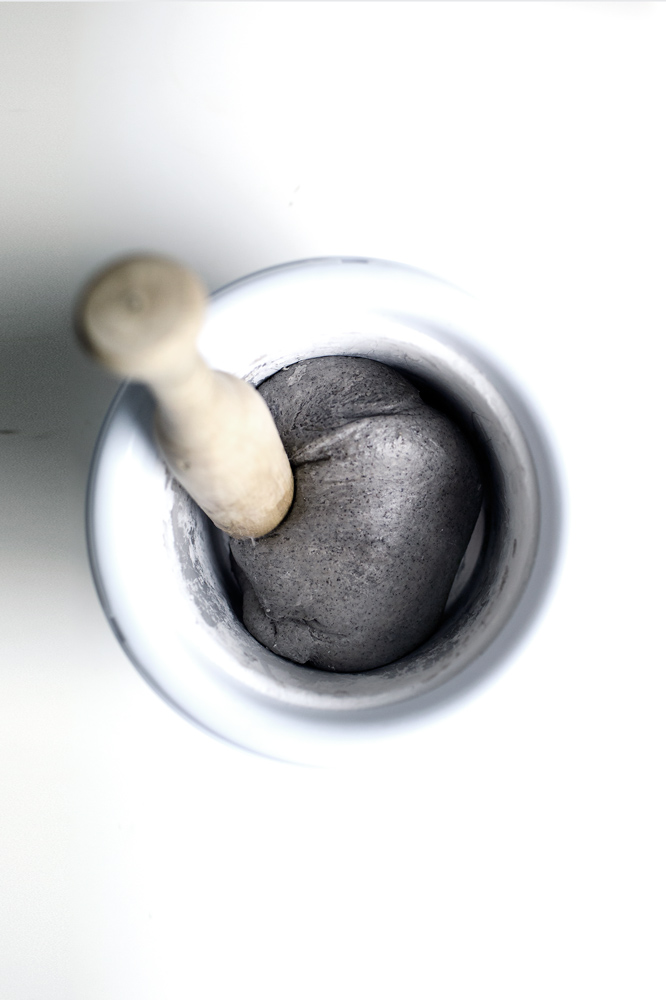 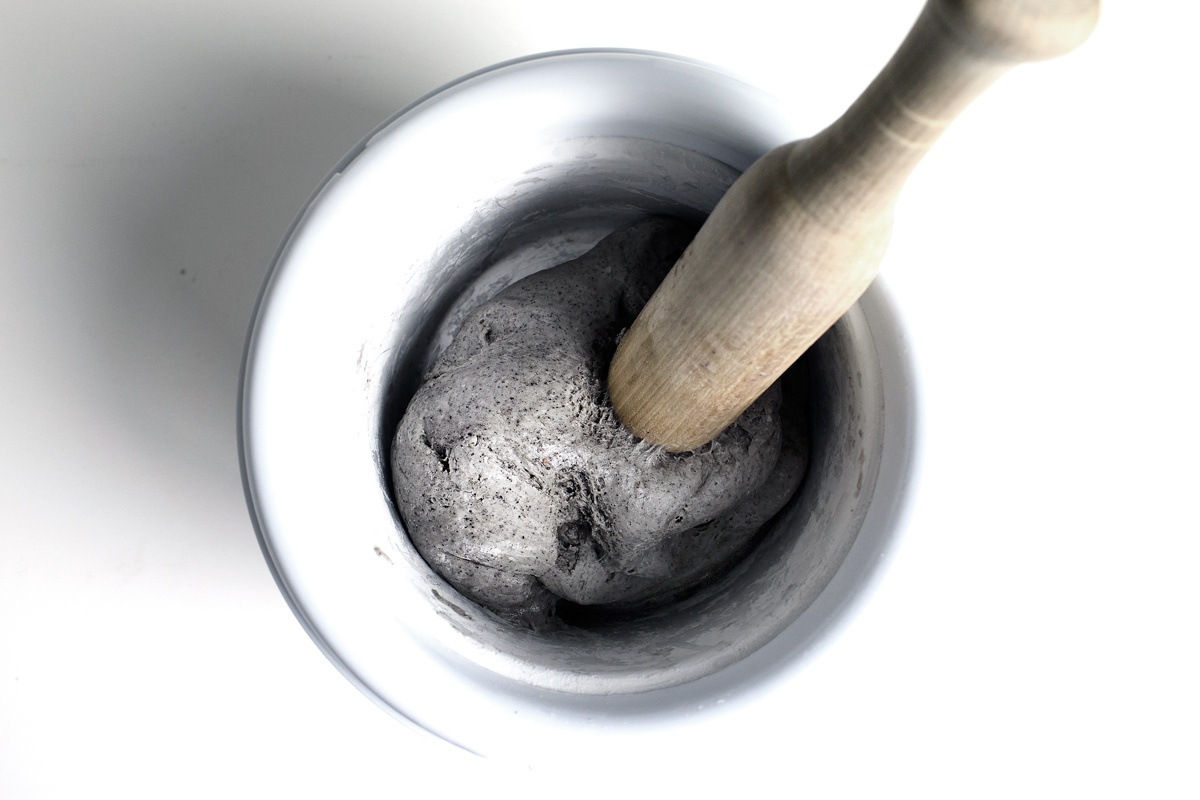 CHECK OUT THE REST OF THE PARTY!

This ice cream is too thick to be churned by a machine. Must be done manually. 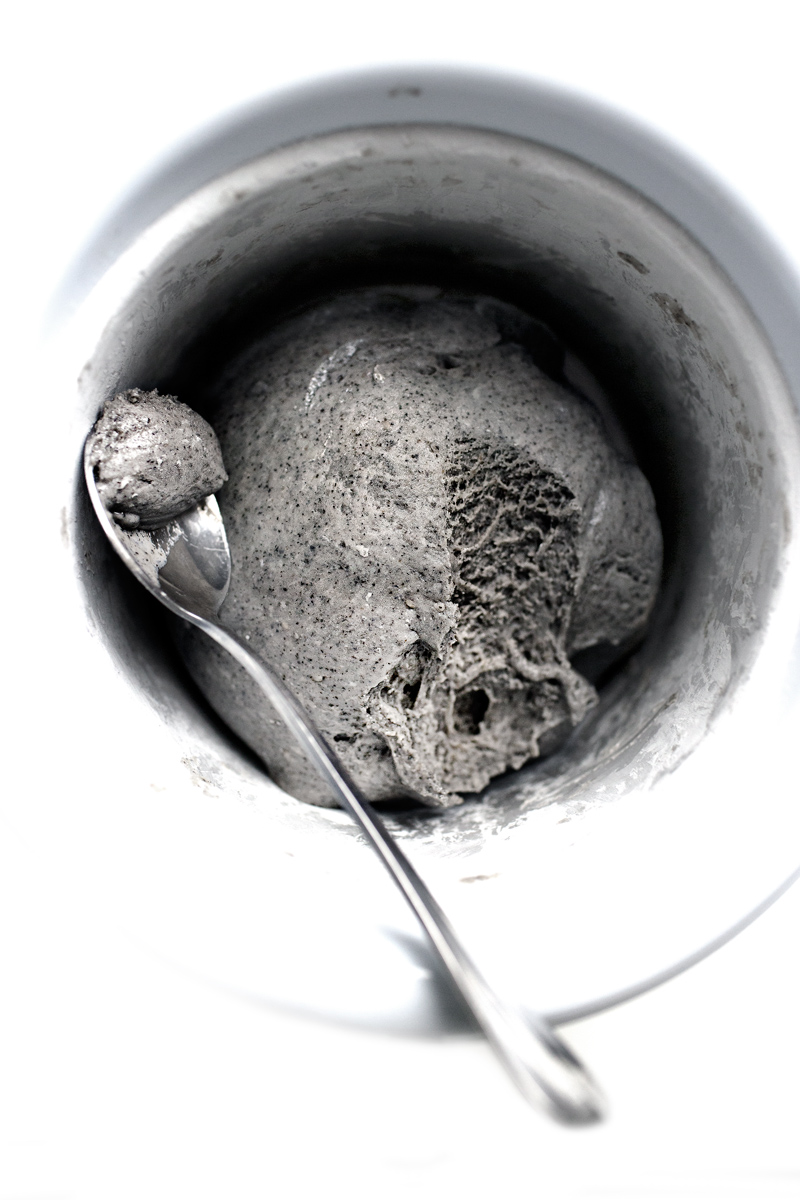