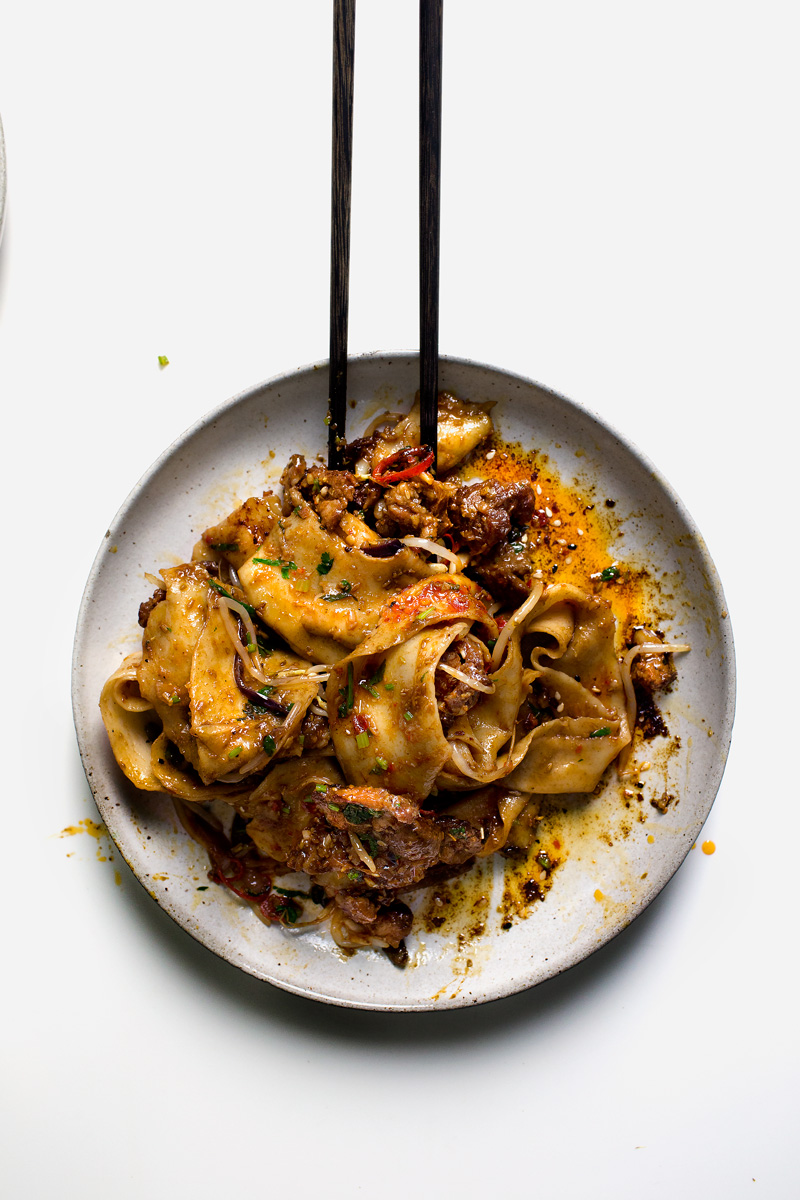 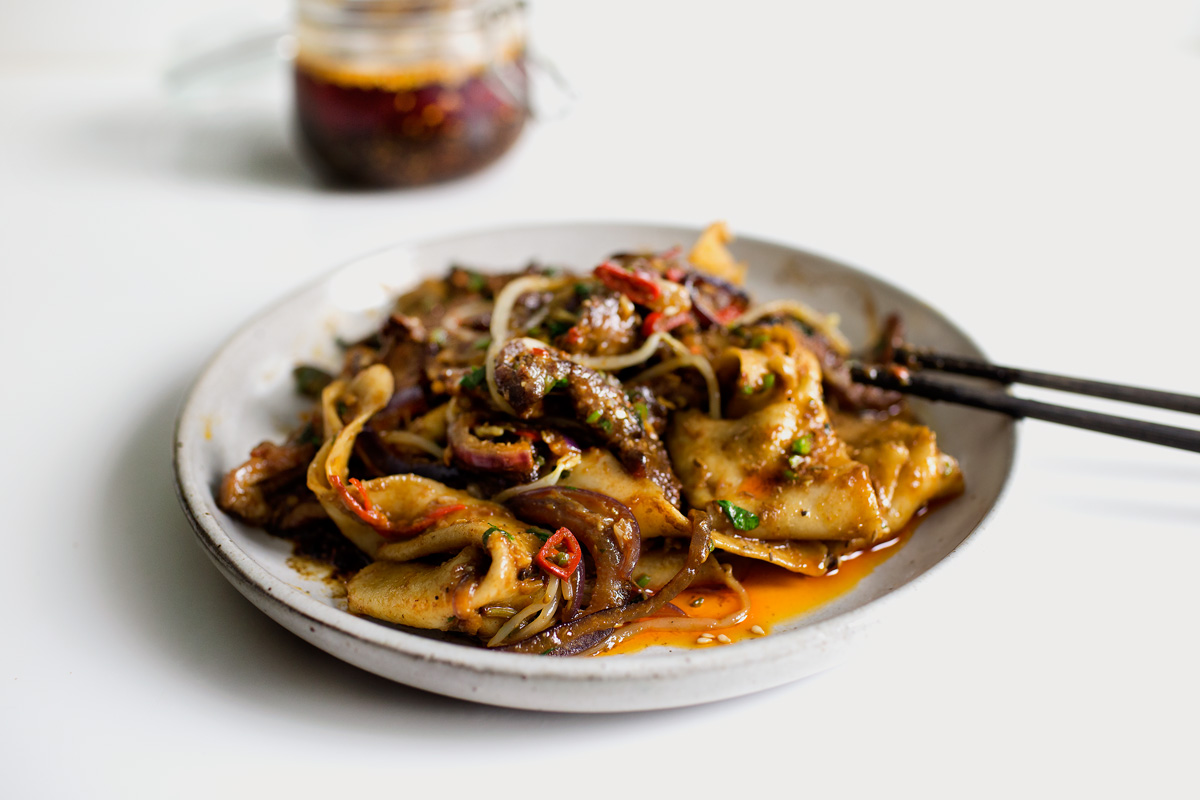 ONCE YOU GET THERE, WHATEVER IT TAKES FOR YOU TO GET THERE,

THE REST IS AS EASY AS BIANG

Does this recipe really need introduction?  If you have been enjoying, following, or even just been seduced from afar by the unstoppable uprise of this basement-stall to now 10 flourishing locations throughout New York, you would not be unfamiliar with the signature dish, from Xian Famous Foods.  The spicy cumin lamb hand-ripped (biang biang) noodles.

I have certainly been a fan.  More precisely, I have been enjoy Xian Famous Foods for the past few years, without actually stepping a foot inside any of their 10 locations.  Because I’ve been here, in Beijing, where “Xian famous foods” are not known as the name of a trending chain-restaurants, but in fact, a genre.  Those 4 Chinese characters almost recognized as their “logo”, are actually common here as a phrase that describes the local street foods of the city Xi-An.  Kind of like having a restaurant called “Texas BBQ”, or “Chicago Hotdogs”.  And on top of the usual suspects of cold skin noodles, cumin lamb burger (called “rou-jia-mo”), lamb offal soup… there is of course, the biang biang. 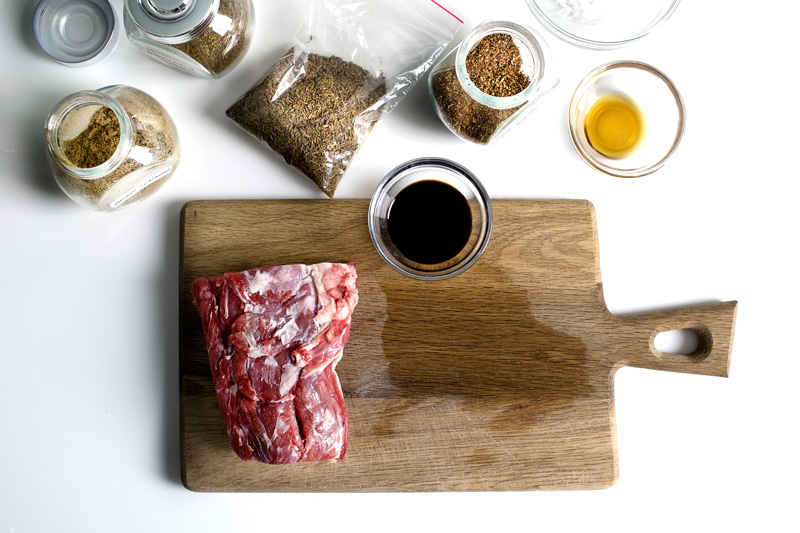 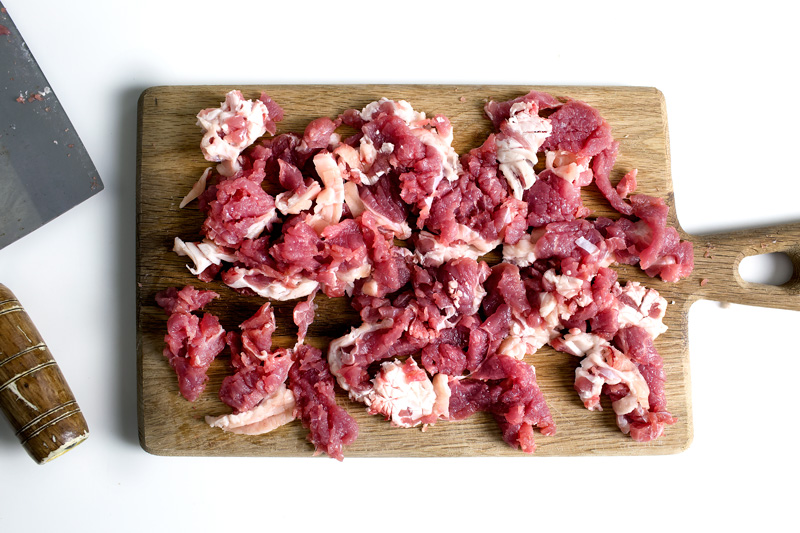 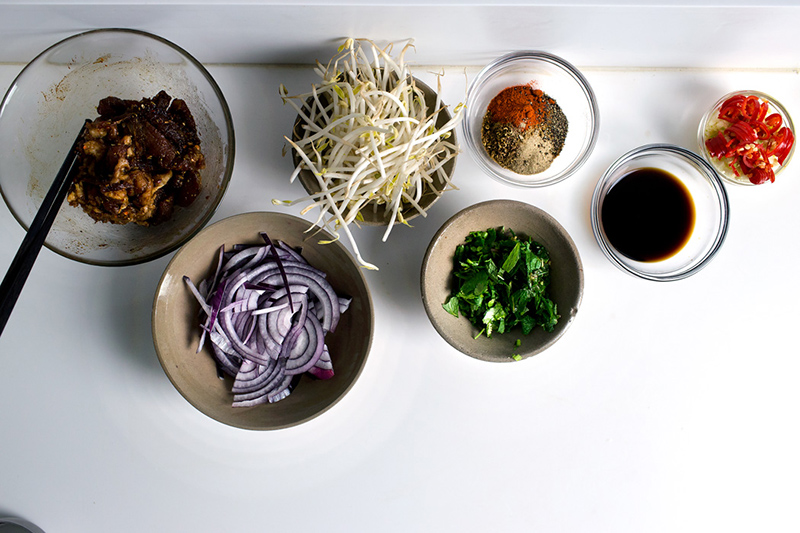 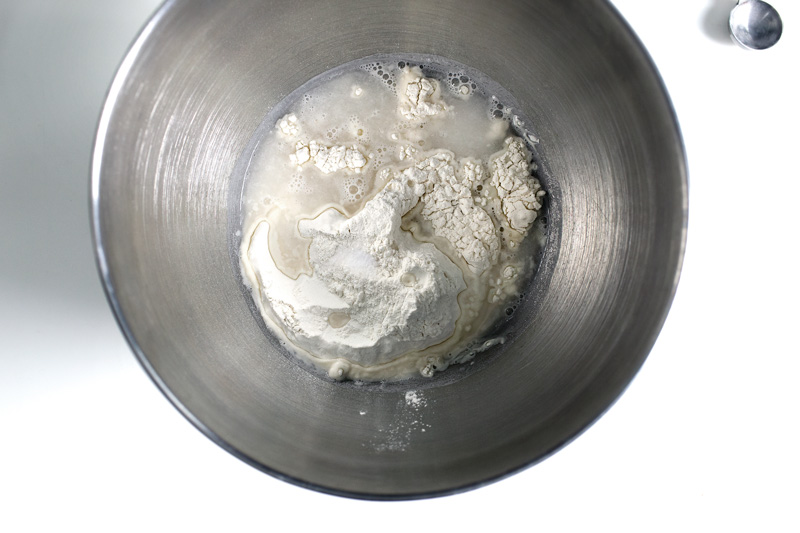 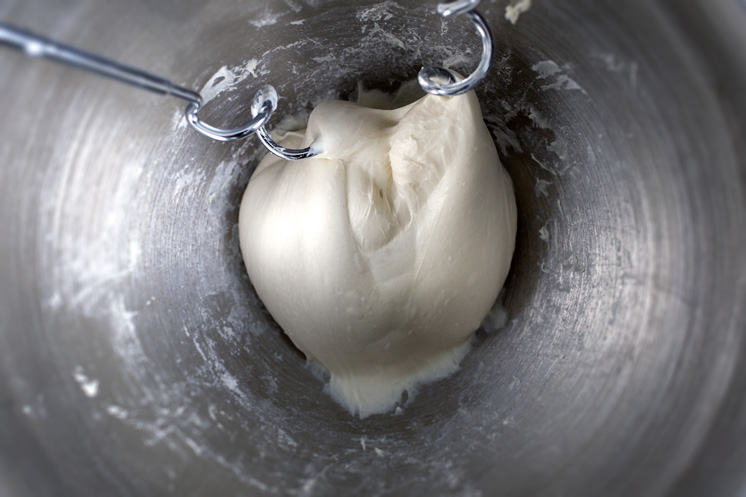 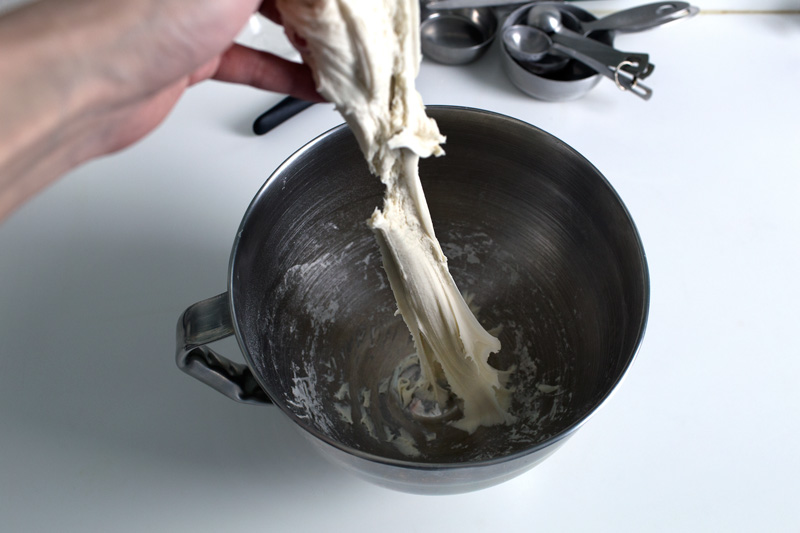 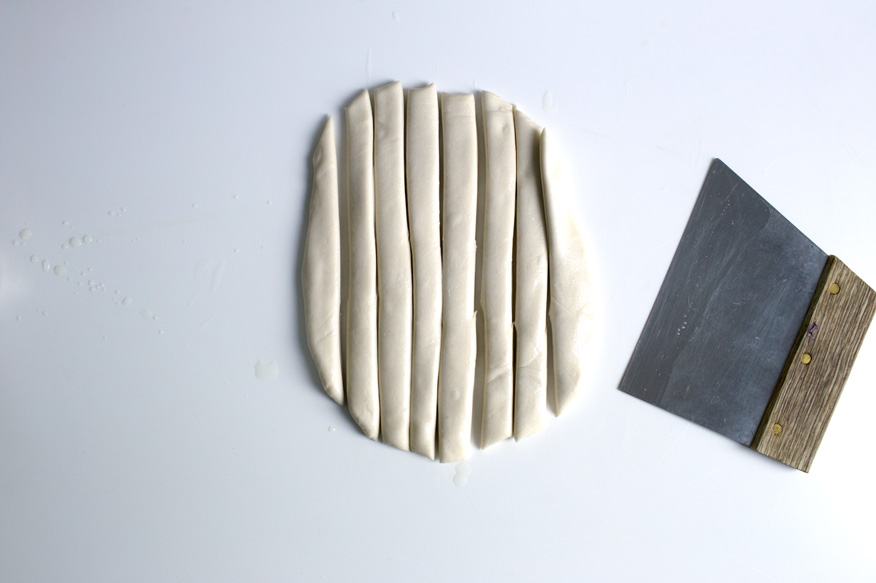 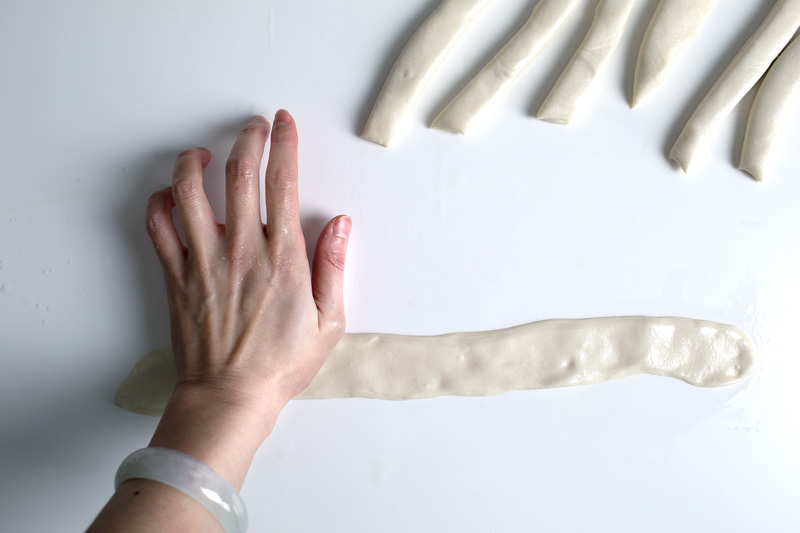 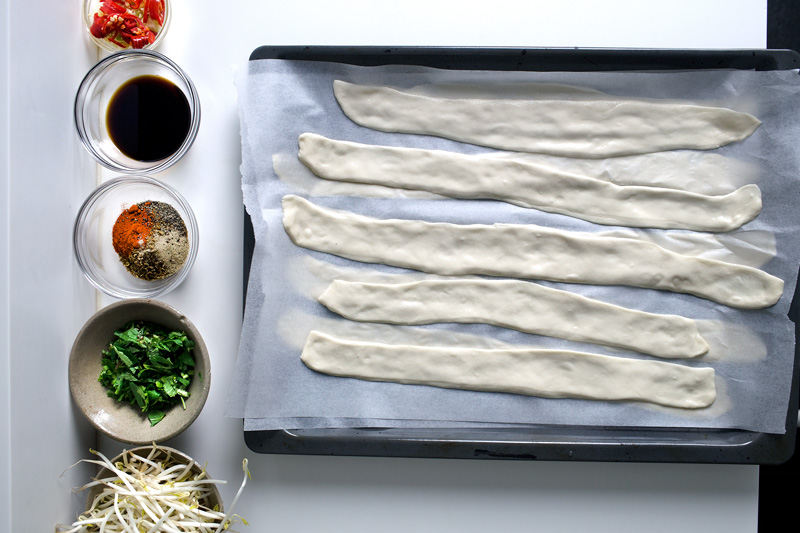 There is no final consensus on the official character for biang.  It is less of a word, but more of a sound, in this case, referring to the sound of the noodles tapping on the counter as they’re being stretched out.  Their most distinctive characteristics are that they have to be hand-stretched, extra long and wide with assertive thickness, and therefore chewy, elastic and sturdy.  All in all, probably brings you to the inevitable conclusion that – there’s no fucking way I’ll ever pull this off myself.

But, you’re wrong.  This is actually, the easiest noodle-dough I’ve ever attempted.  The catch is, manipulating the right type of flour into the right consistency.

In a perfect world, aim for Chinese dumpling flour, usually available in Asian supermarkets, with a protein/gluten-level at around 10%.  It is an extra-fine ground flour with good water-absorbency, and thus ideal for producing a very smooth and elastic dough.  In an imperfect and desperate world, try substituting with Italian tipo 00 flour (I have actually tried with my tipo 00 without success, but you might have a more competent variety), but pay attention to the protein/gluten-level.  “Tipo 00” is an indication that the flour is an extra-fine ground, but it doesn’t tell you how much protein is in the flour to form gluten, so you might have to read the label to find out.   My suggestion?  Hunt down a dumpling flour.

Then once you have the right flour, it’s about mercilessly manipulating it into a blob of super pliable, stretchy, and borderline-stringy dough that will make the rest of the job, a walk in the park.  Forget hand-kneading.  Unless you have the arm-strength of Hulk and practice dough-kneading as a competitive sport, forget it.  To deliver the dough into a substance that practically stretches itself and beyond, you’ll need mechanical help.  Believe me, I’ve been there, 20 minutes in, and I was left with a stiff neck and a dough that was still slightly grainy and breaks like a teenager under pressure.  But with an electric mixer (or my hand-held mixer with dough-hooks), all it took was 5~6 min of brutal kneading, and I had a dough that curled like a gentle snake when it was pulled up and dropped down.  Once you get there, whatever it takes for you to get there, the rest is as easy as biang.

Because this dough wants to stretch.  It will stretch.  It stretches even without you trying.  Different from the usual practice of using flour to prevent sticking, this noodle uses oil (therefore it will stick to each other)(and therefore is best made to order).  Once you cut the dough into long rectangles, simply smack/smash/pound/bang (whatever verb you prefer) it down to a flat and wide strip, then lift it up from both ends and tap it against the counter as it stretches (biang… biang… biang…).  If your dough is right, if your dough is there, this will happen as naturally as an ice-cream will melt in your hands.  The only detail I omit, is the hand-ripping part.  How NY’s Xian Famous Foods does it, is that they rip the strip down the middle into two strands of noodles.  From what I’ve observed in Beijing, that is not how it’s necessarily done.  It will take a bit more skill, lead to possible failures and discouragements, and honestly, I don’t see how it enhances the texture of the noodles (it creates ruffles on the edges that are usually too soggy).  So there, I said you don’t actually need it.  But what you will need, is the worthy delivery to honor your work.

Succulent lambs and cumin, lots and lots of cumin, no news there, is gonna taste real good.  But what pushes this dish over the edge, is the ass-kicking spiciness from fresh red chilis, dried chili flakes and ground cayenne.  Together with minced garlic, grated ginger, onions, ground coriander, ground sichuan peppercorns, fresh herbs and seasonings, it makes a dark, oily and intense sauce that will coat every slippery surface of those wide and chewy, hand-smashed noodles.  Then don’t you dare, don’t you dare not serving it with the ultimate chili oil that will change everything you think you know about pain and pleasure.  Drown it!  Drown it then down it!  And don’t bother wiping your face because the next thing you know, it’s dug into the plate as you lick it clean.

Don’t thank me.  Because the next time I see you, with swollen lips and a drop of sweat down your flushed cheeks, I’ll see through the dazedness of your eyes, and silently there is, satisfaction.  And we’ll both know.   You’re welcome. 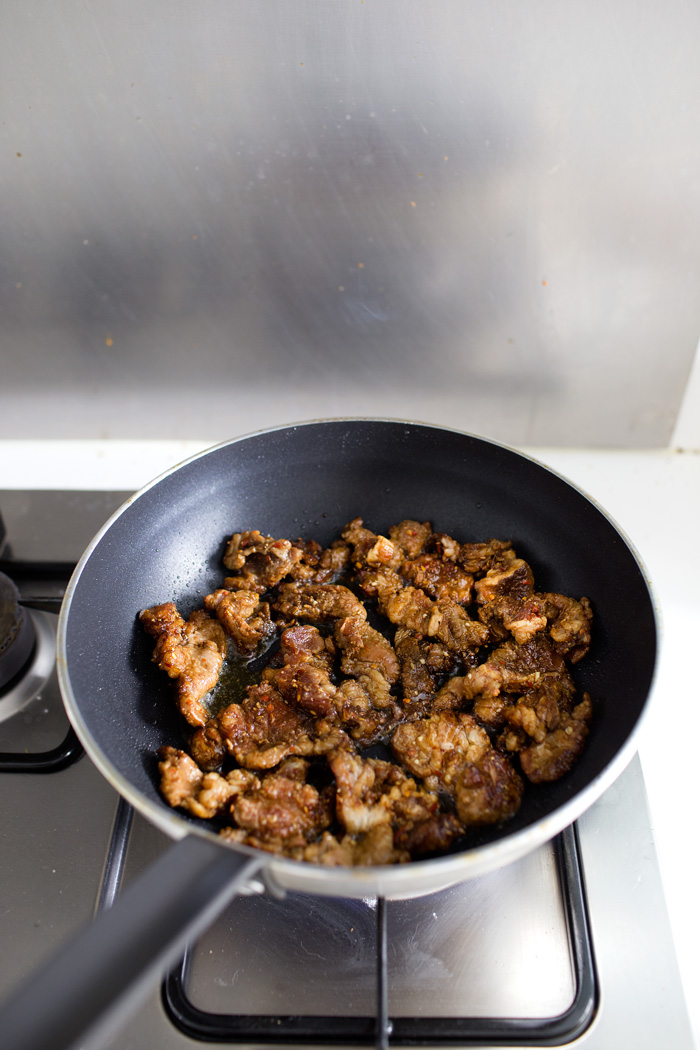 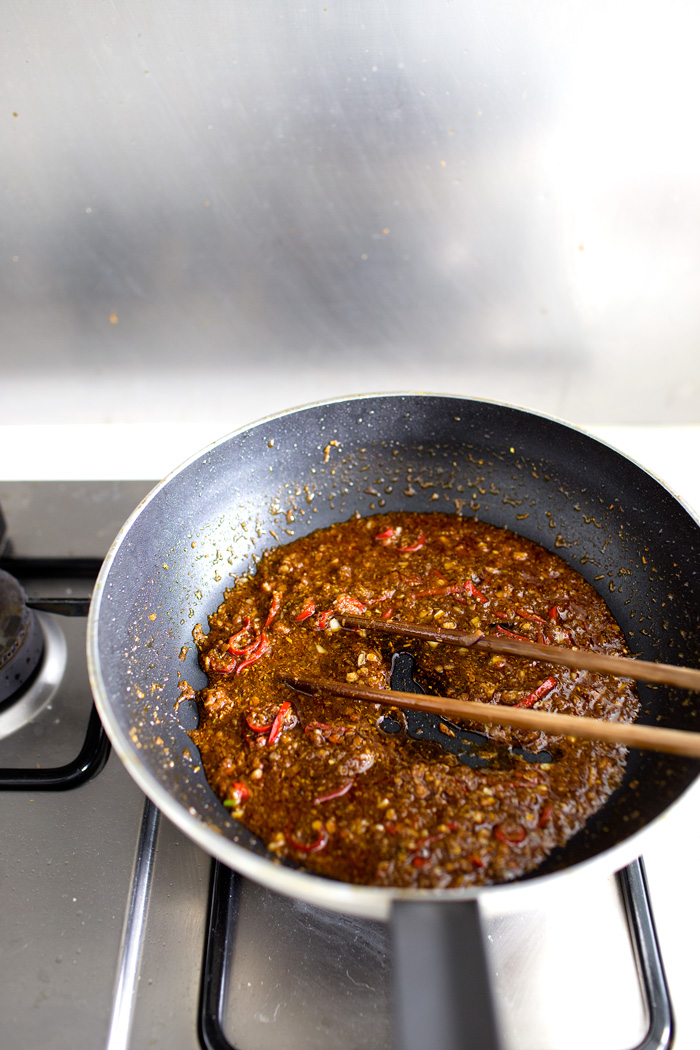 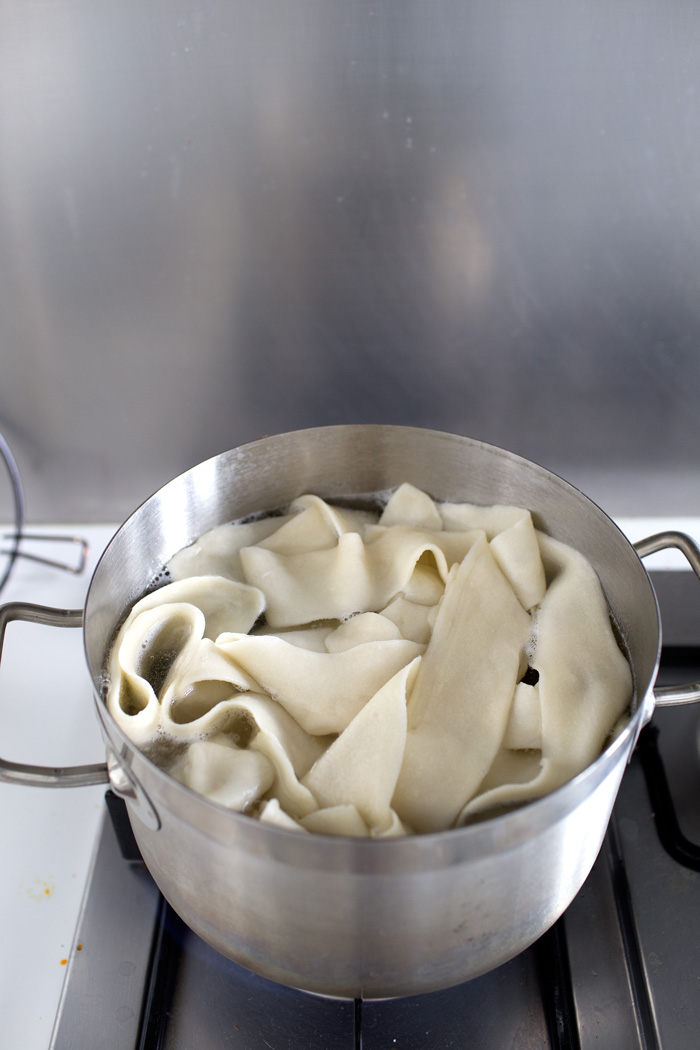 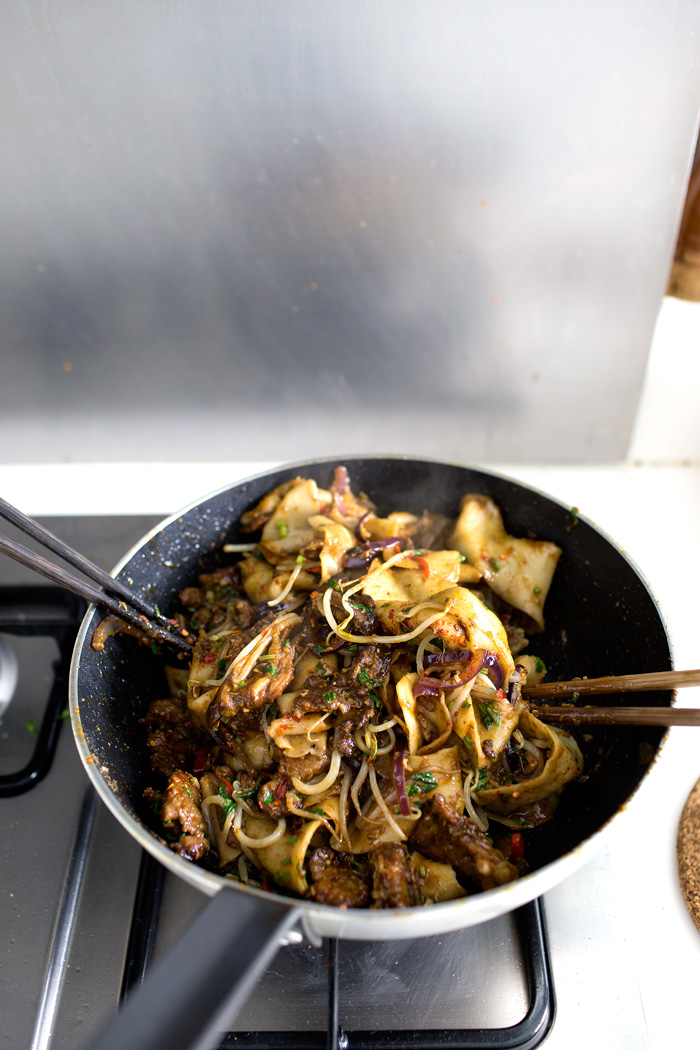 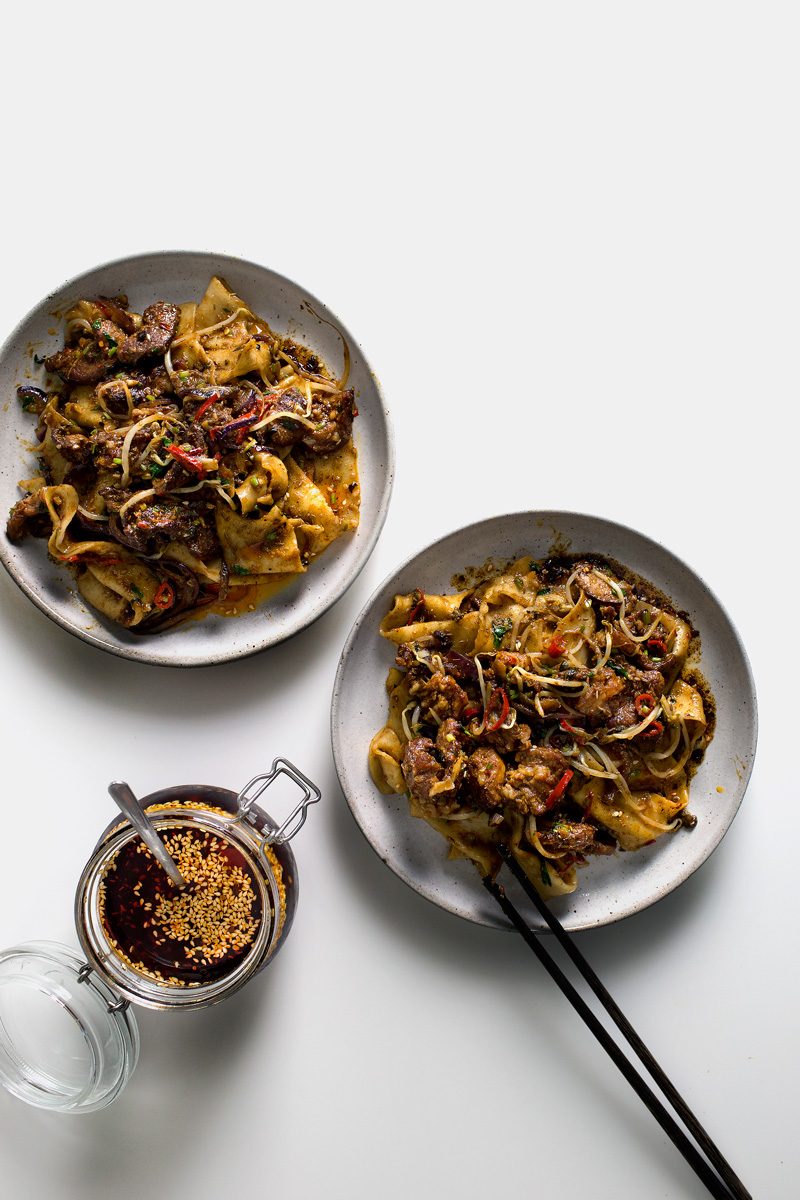 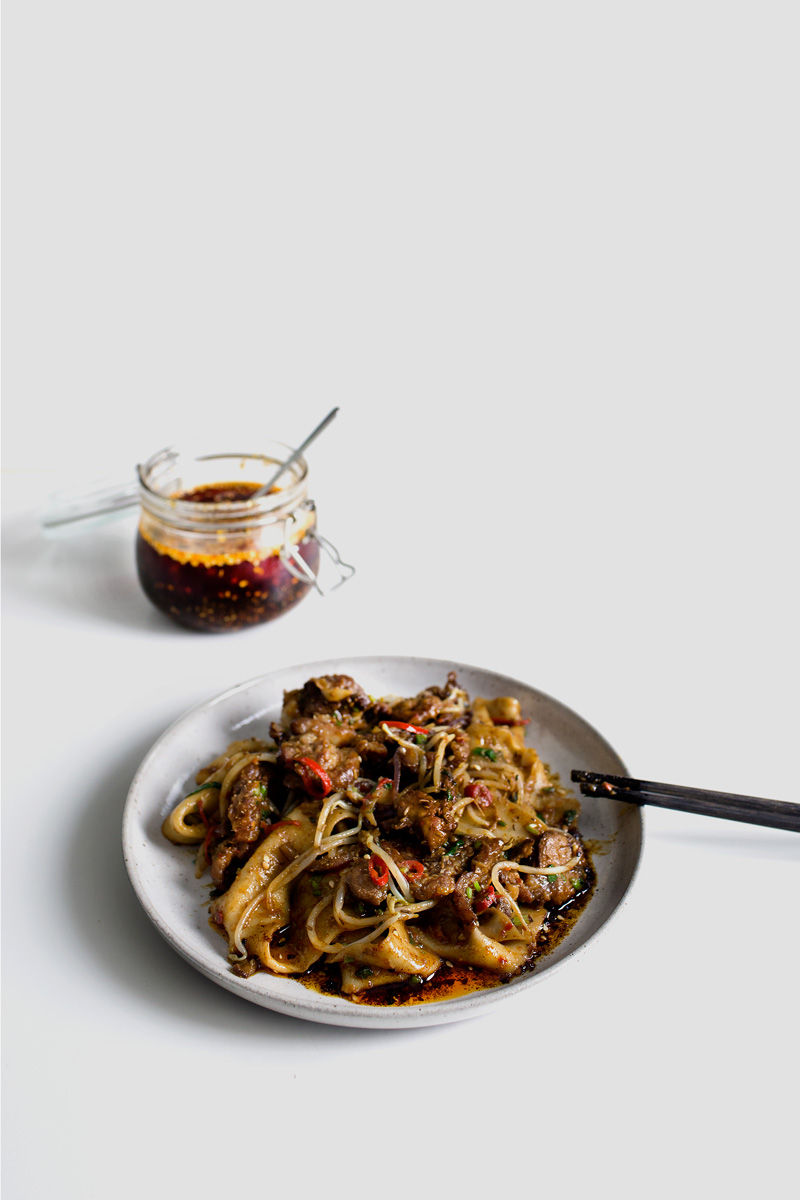 OK, I know what you’re thinking, like this is the longest ingredient-list you’ve ever seen, and so, forget this shit.  NO, don’t!  You see, that’s the thing with a mixture of spices.  It tends to stretch out into the realm of intimidation, but really, it’s just a mixture of things you add all at once!  Not to mention, a lot of them being repetitive in the recipe (the marinate and the seasonings have a lot of overlaps).  To demonstrate that it really is a lot simpler than it looks, I’m doing something I’ve never done before in recipe-writing, which is that I organized the ingredients in groups, in the order they will be implemented.  So this way, the instruction will read a lot simpler, and you’ll realize that it’s not complicated.

Then, in terms of flours.  I’m using a wheat flour in China called “dumpling flour”, which is very fine ground and contains a bit more protein (forms more gluten) than American all-purpose flour.  To substitute it if unavailable, I would say try Italian tip 00 flour with proten/gluten-level at 10% (my tipo 00 didn’t work out but yours might).  Which brings me to something that I can’t stress enough: MEASURE BY WEIGHT.  1 1/2 cup of this dumpling flour measured 218 grams instead of 187 grams from online-conversion for all-purpose!  You can see how big of a difference that is!  So please.

The recipe is for 2 servings, and I would not try to cook more than 2 servings at once, or you’ll end up with a bulk of mess all stuck together in your skillet.

UPDATE 2015/8/20:  I’ve removed “Italian tip 00” from the list of suggested flours because I discovered that the protein content in Italian tip 00 is actually/typically much lower than dumpling flour or bread flour.

Toast the cumin seeds on a skillet over medium heat, stirring constantly, until they start to pop and smell fragrant.  Immediately transfer to a stone-mortar or spice-grinder before they burn.  Grind them into a consistency that resembles coarsely ground black pepper, then set aside.

TO PREPARE THE LAMB AND SEASONINGS:  Scatter lamb-slices flat on a chopping board in 1 single layer, then “tap” them all over with a sharp knife, aiming at scoring/tenderizing the meat without cutting through.  Do this thoroughly.  It allows the marinate to penetrate, and gives the lamb a more interesting texture.  Then mix the lamb with the “marinates”, using your hands to really distribute the seasonings evenly.  Let marinate for at least 2 hours.

TO MAKE THE HAND-SMASHED NOODLE:  In a stand-mixer bowl (or with a hand-held mixer if it comes with dough-hooks)(hand-kneading not recommended), add  Chinese dumpling flour, salt and water.  Start mixing on low then gradually increase the speed to high, and knead for 5 ~ 6 min.  The dough will feel shaggy and a bit dry in the beginning, but as the flour absorbs water and glutens start to form, it will become extremely smooth and elastic at the end.  It will be sticky but pulls away cleanly from the bowl during mixing.  You should be able to “tap” the dough quickly with your finger without it sticking, and pull it slowly upward into 12″ (30 cm) long without breaking.  If the dough breaks, either it’s not kneaded sufficiently or it’s too dry.  You’ll have to try both ways (try kneading it for another 3 min first, before adding more water) to get it to the correct consistency.  Cover the bowl with plastic wrap, and let rest for at least 1 hour.

Line a large baking sheet with parchment, set aside.  Prepare a small cup of canola oil within your reach.  Oil your hands well, then transfer the dough onto an oiled surface.  Roll out into an approximately 1/2″ (1 cm) thick, rectangular shape, then cut into 10  long strips.  Separate and lightly oil each strips so they don’t stick back to each other.  Take 1 strip and lay flat on the counter, then with oiled palm, start smashing/pounding the strip outward into a long, wide and flat noodle.  Don’t worry about evenness or straight edges because it doesn’t matter.  Now pick up the noodle on both ends, lift it and gently tap it on the counter while stretching it out slightly.  You don’t have to try hard.  The noodle WANTS to stretch out and gravity will pretty much do the job for you!  Lay the noodle flat, without any foldings, on the parchment-lined baking-sheet.  Repeat with the rest (lay a new parchment over the top once you run out of space).

Carefully not to make the noodles too thin or they will lose their desired texture (you shouldn’t be able to see through it).

TO COOK:  Bring a large pot of water to boil.  Meanwhile, heat another large deep skillet/wok over high heat.  Mix 2 tbsp of canola oil (not in the ingredient list) into the marinated lamb to lubricate/separate them, then add to the hot skillet as spread out as possible.  Let caramelize for 30 sec without moving, then start sautéing just until they are no longer pink.  Add “Seasoning A” and cook just until it starts to soften, then transfer to a bowl.

Add 4 tbsp of canola oil from “Seasoning B” to the same skillet until hot, then add the rest of “Seasoning B”.  Cook until fragrant without burning the garlic, then add “Seasoning C”.  Turn off the heat while you cook the noodle.  Add the noodles, one by one, into the boiling water.  Cook just until they float to the surface (it will take less than a min), then drain/transfer to the skillet.  Turn the skillet heat back on high, then add the lambs/onion and gently toss everything together.  Finish with “Seasoning D”.

Serve immediately with chili oil, and I’d like to sprinkle a bit more ground cumin on top.