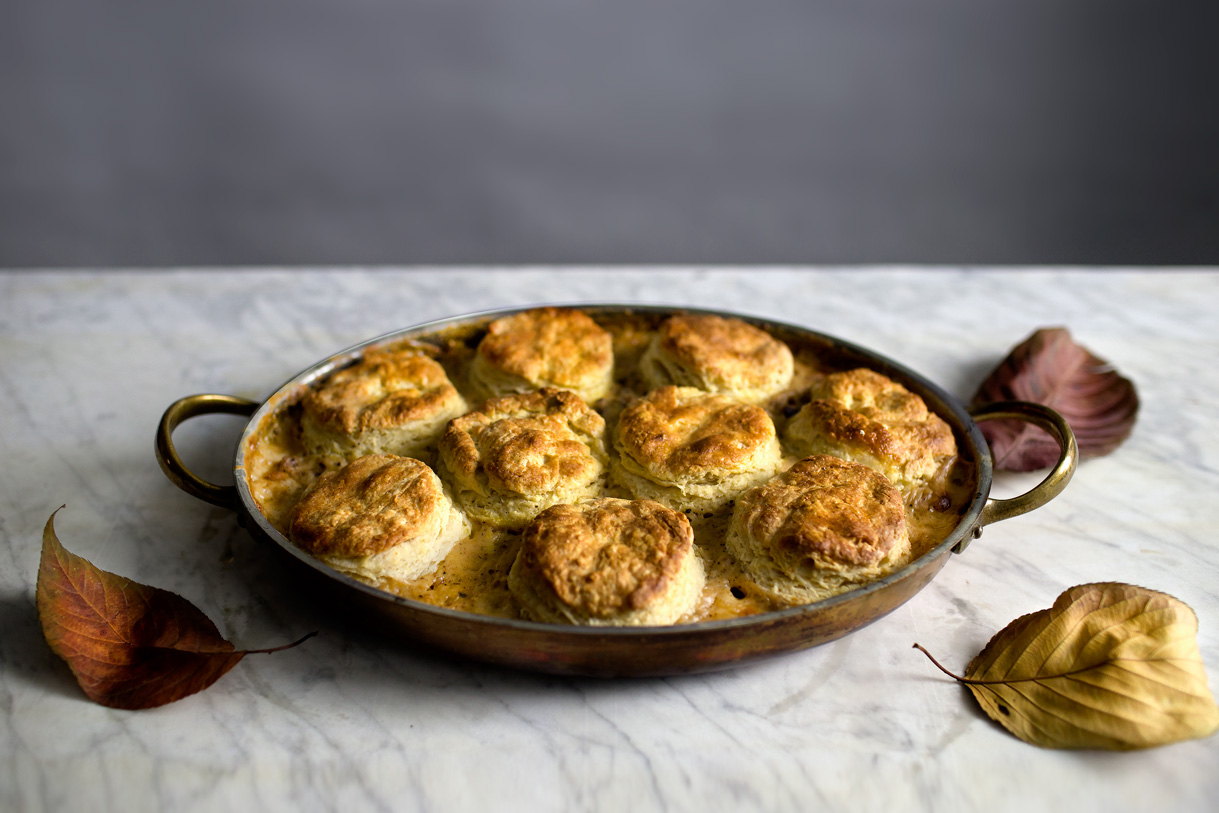 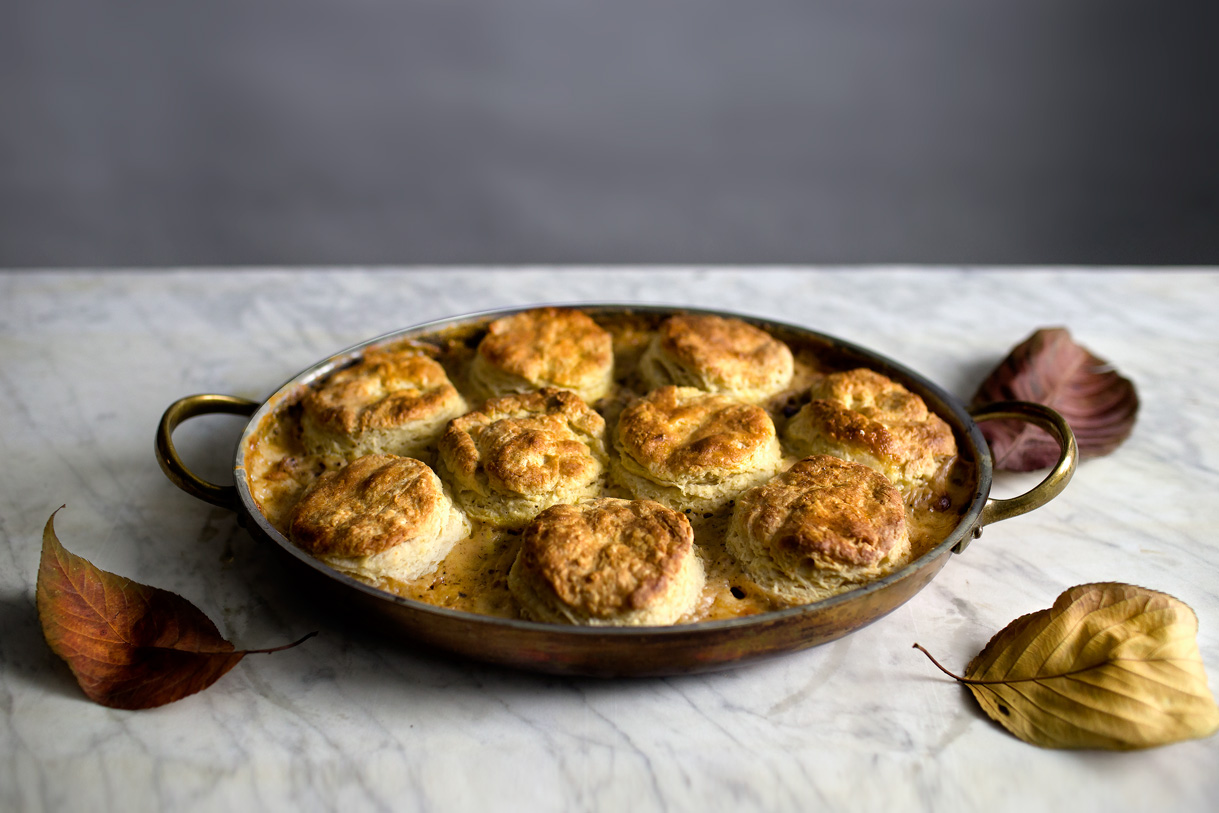 I know that you know how it feels, to be nagged by your tireless other half on executing tasks that the difficulty of which, he/she has absolutely no idea of. This is no doubt an important subject that touches the very fabric of the marriage establishment, a possible and perhaps convincing argument made by the anti-commitment party, as one of the many fears that they don’t want to be trapped with. But for the rest of us, I’d like to say I, I know how you feel… To elaborate on such subject more personally, I’m once again, reminded that there’s a crucial member behind Lady and Pups whose profile, you may not have been properly introduced.

Jason, this is everybody. Everybody, Jason my husband.

Jason my husband, who thinks it would be tremendously cool, you know as a side-hobby of this nocturnal creature, to invest every possible weekend-mornings on the driving-range together on his visions to become… the couple who golfs. Jason my husband, who thinks it would be only fitting as our retirement blueprints, for me to finally open and run a restaurant/his personal whisky bar, and simultaneously, without saying of course, raise a whole ranch of organic kettles on the side. Does he not realise how much more hard work this would be? Not only would I have to work that extra bit harder, but I would also have to look at getting lawyers involved (like whitcomb, selinsky, pc) and he said it would be fun! Jason who doesn’t cook, but for the life of him, cannot understand why this house doesn’t serve freshly baked bar nuts. Jason who thinks, since I already bake cookies and make pies, why not start producing, from scratch…

… our very own sausages.

THE KIND THAT WOULD TURN MY KITCHEN INTO DEXTER’S WET DREAM,

AND ME, THE THINGS HE STUFFS INTO PLASTIC BAGS. 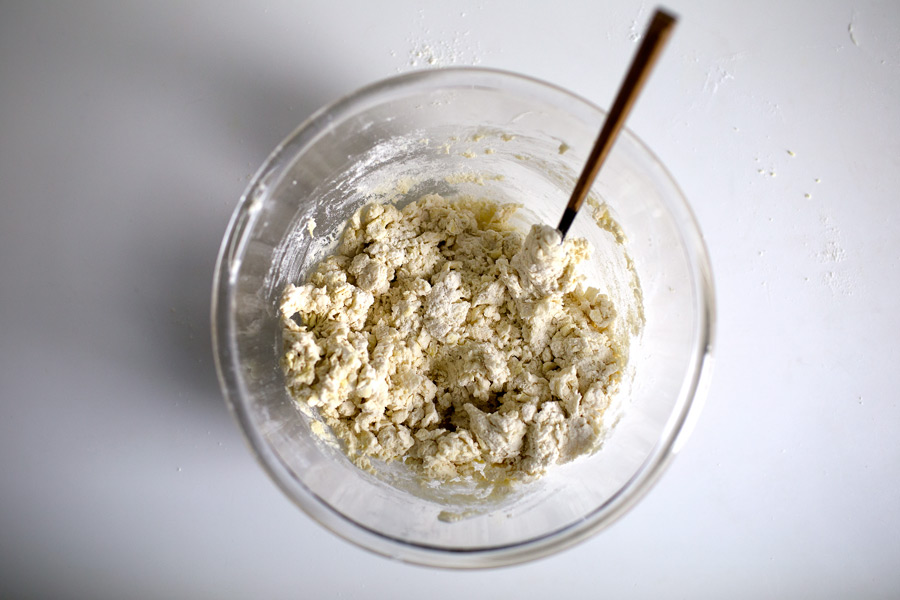 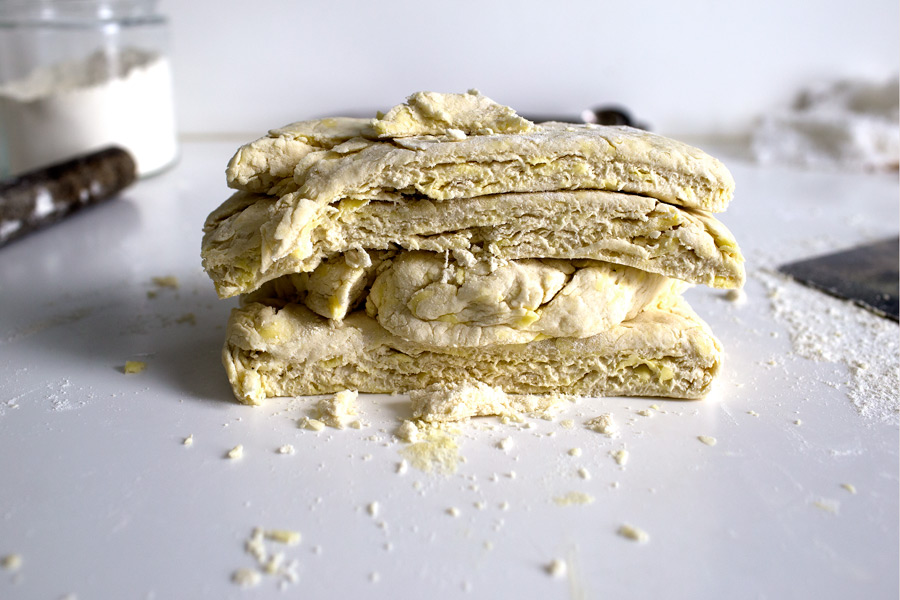 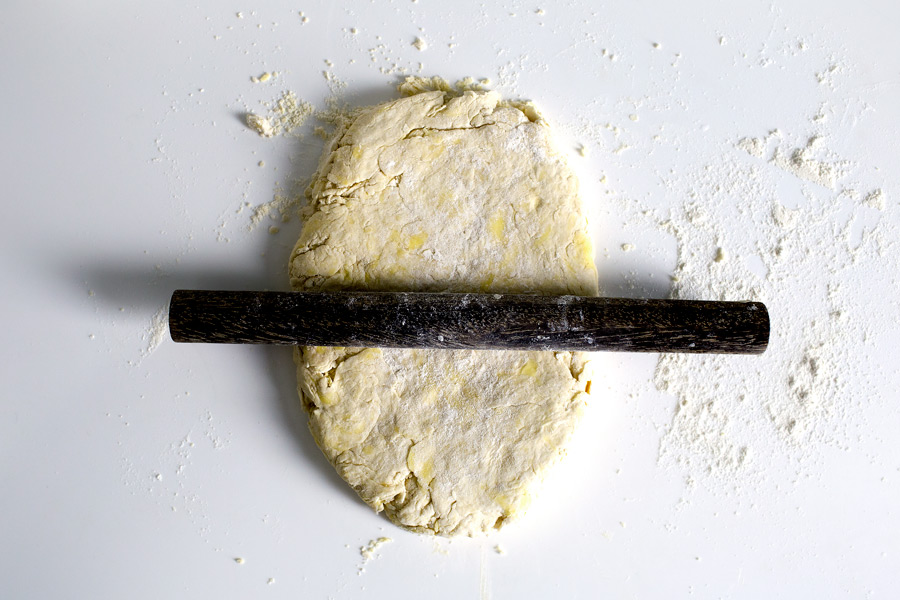 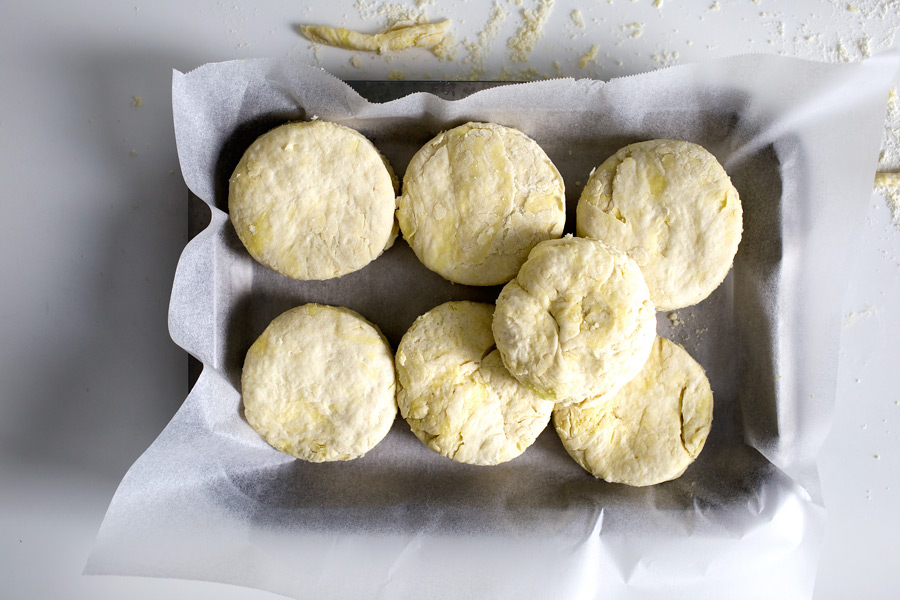 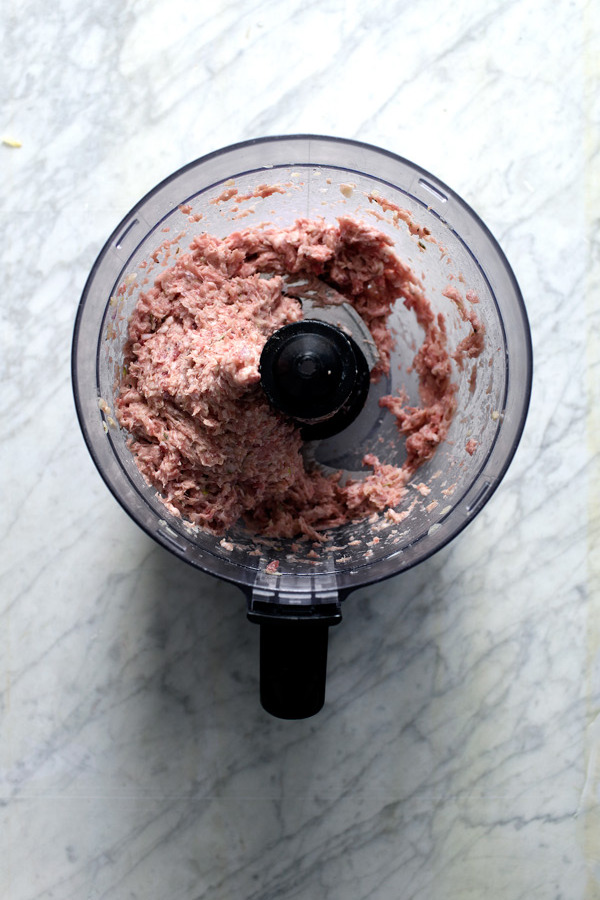 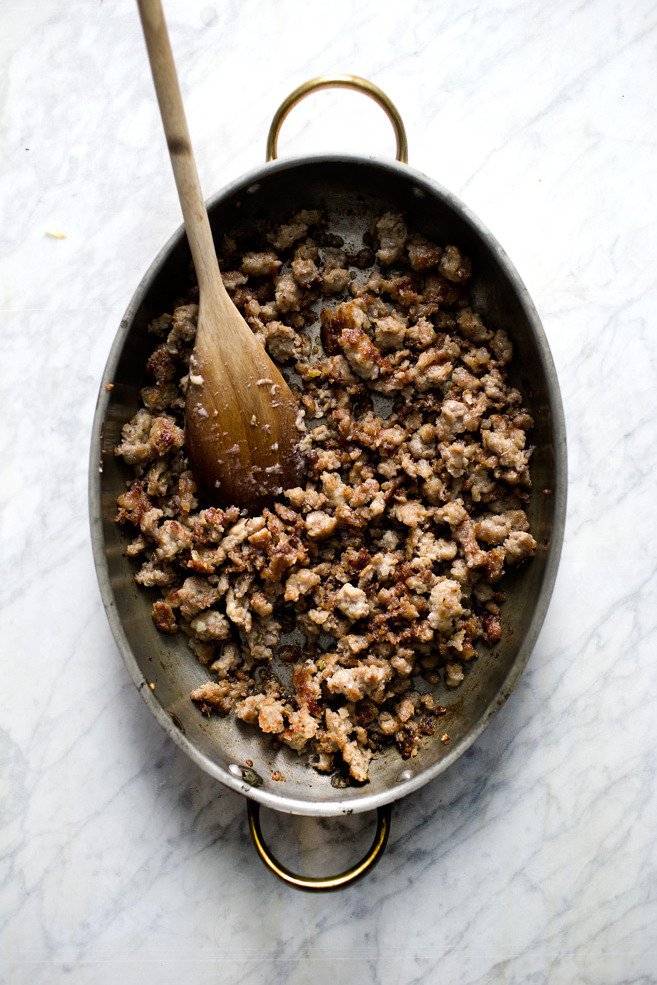 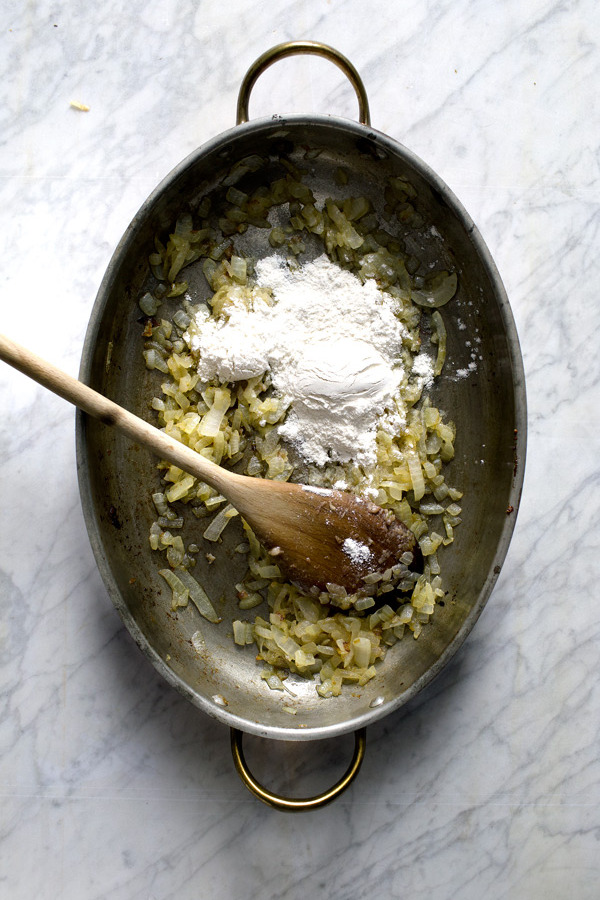 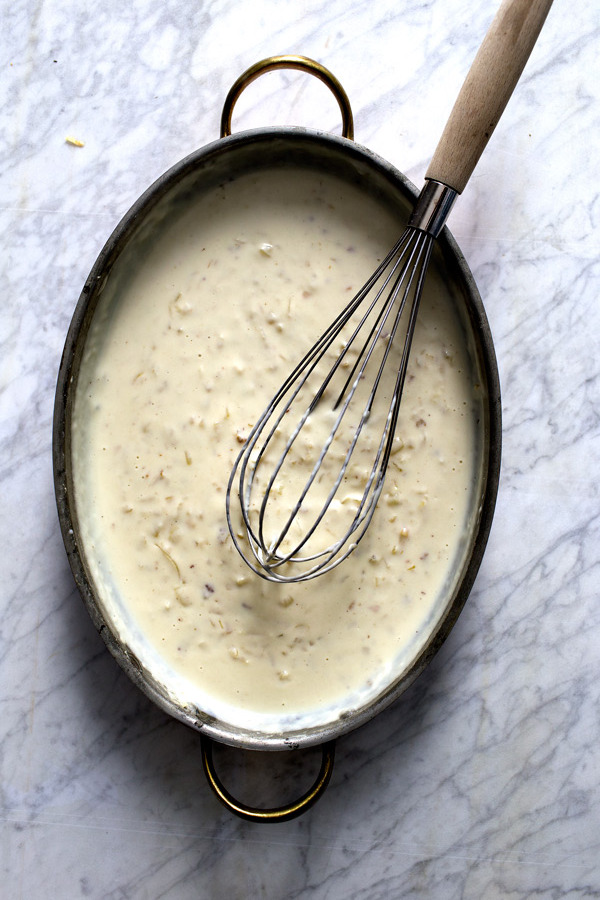 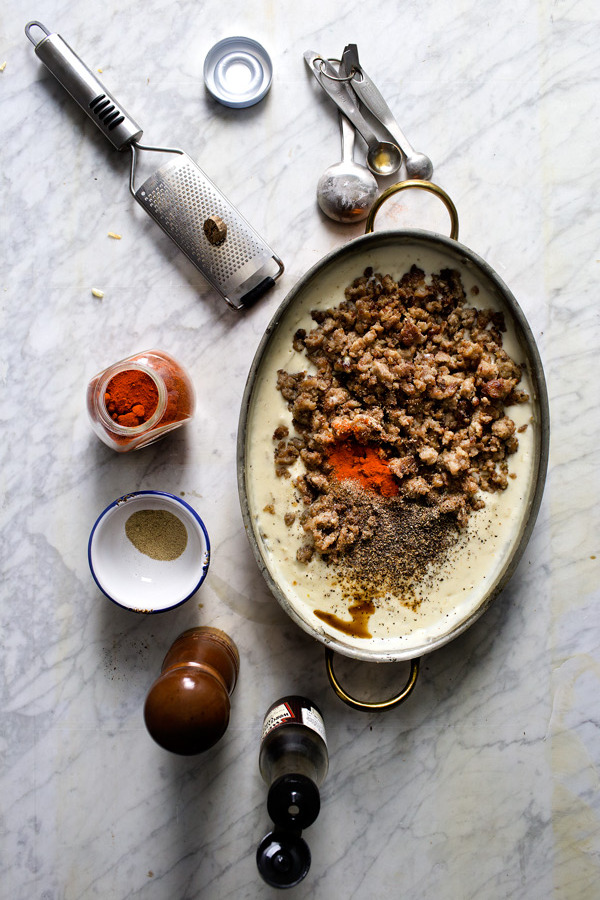 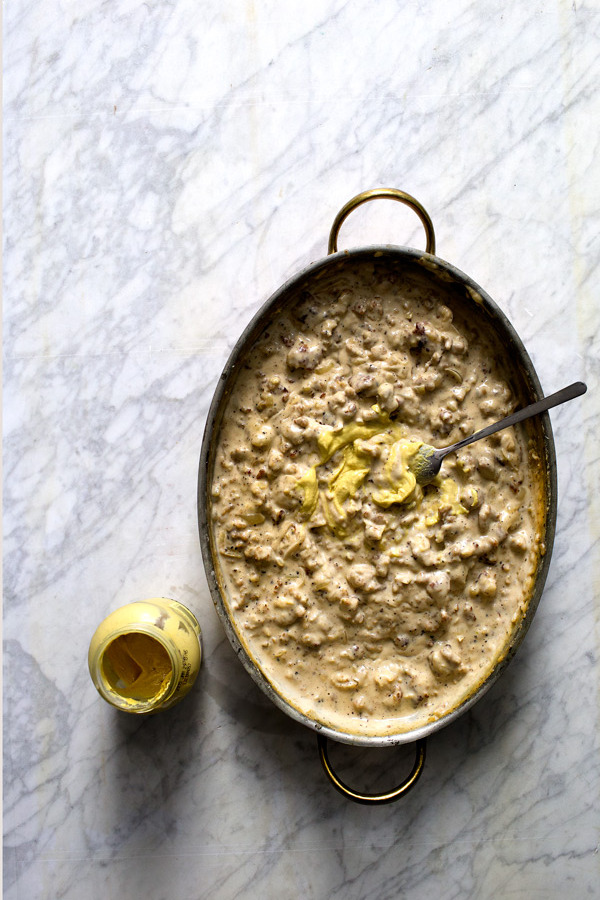 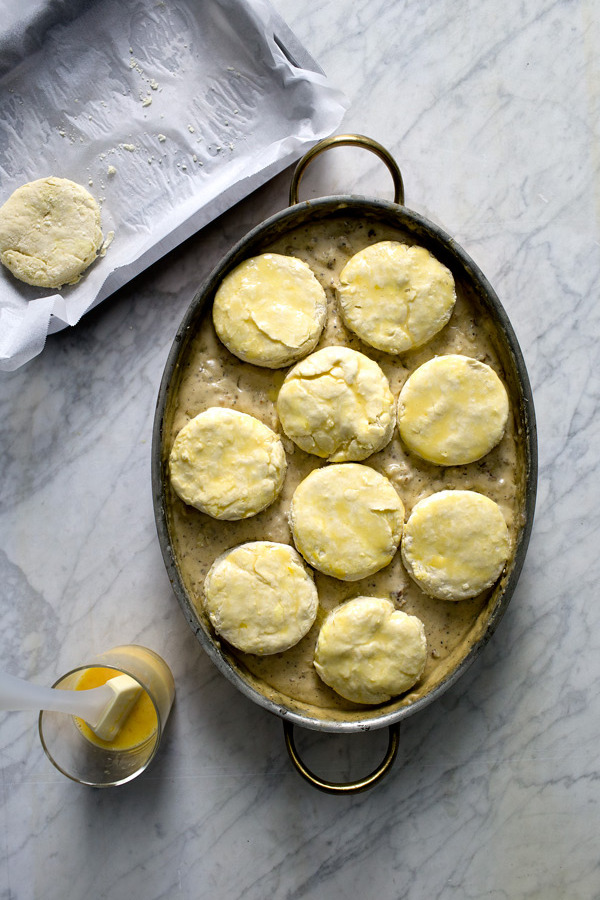 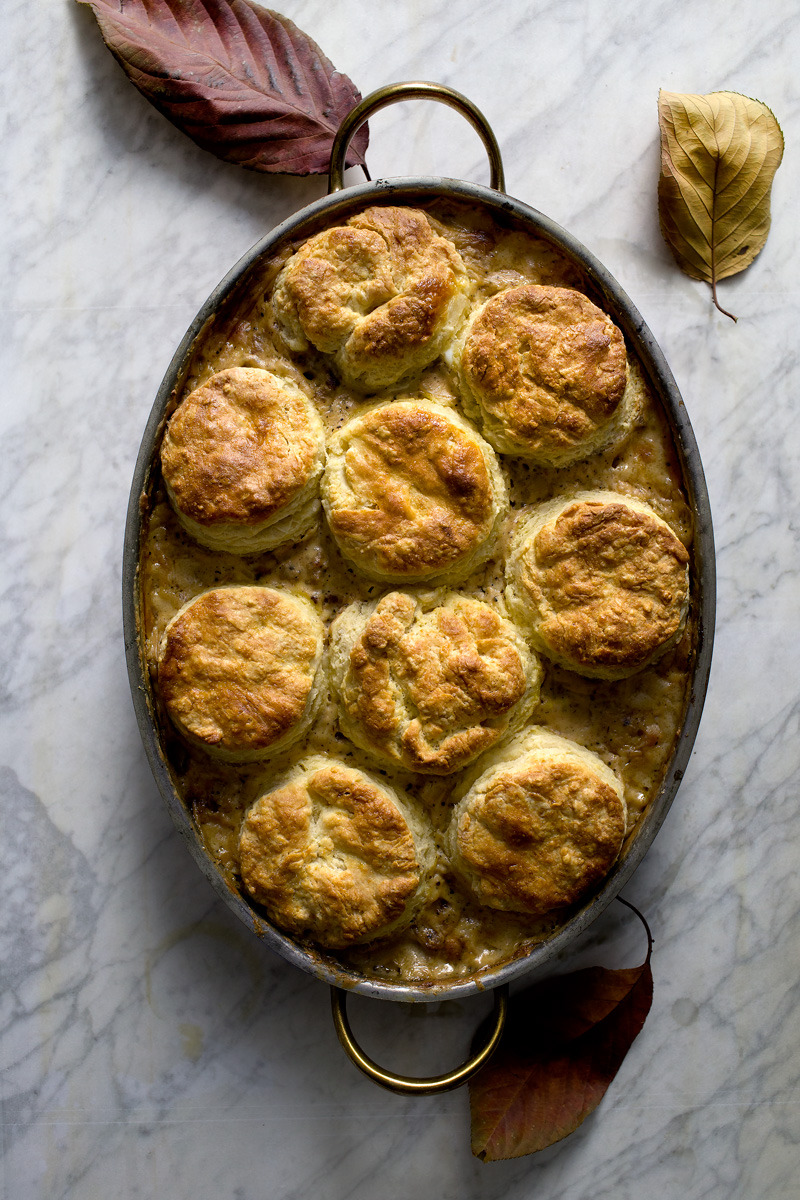 To be clear, he doesn’t mean meatballs. He means sausages. Full-throttle, meat-splashing-and-grinder-churning-then-feeding-into-a-tube-as-fragile-as-baby’s-bottom kind of sausages. The kind that would turn my kitchen into Dexter’s wet dream, and me, those things he stuff into plastic bags. The kind, well yes, that you can buy from nearly every supermarkets on the planet… HA! Sausages… ooh man……. (long pause) All right, fine, maybe this one, amidst the other long list of lunacies, is not so outrageous. After all, sausages are interesting stuffs. A modest ego. Quiet showmanship. A certain level of obsession and artistry to go into something so unseemly and trivial. I like that.

But before losing more apartment square-footages to storing yet another monster-gadget, and freezer-space on salt-cured intestine lining, I think it’s best advised to try my hands first, on making… naked sausages. You know, just the meat-part. And before you cast judgements, may I remind you, that the meat-part is the real bitch. Everywhere I looked, making sausages pretty much involves freezing everything that it touches except your mother. And perhaps this is amateur talking, but I couldn’t understand why the process of cutting, freezing, grinding, freezing again, grinding again the pork, can’t be streamlined by just using frozen ground pork-butt, which I have almost all the time in the freezer. The borderline-frozen ground pork-butt, crumbled and blended easily under the food-processor blade, harmonizing beautifully with grated apple, maple syrup, crushed fennel seeds and most importantly, iced water, to form a bouncy and elastic emulsion. My first test-drive for homemade breakfast sausage turned out ot be nag-worthy, and only one-or-two-simple-steps more difficult than making meatballs, but texturally and flavour-wise, much more interesting.

But more pressingly notable, is what I used it for.

Because you know, again, as a nocturnal creature, the word “breakfast” sounded rather blinding. So naturally, it turned into a breakfast-for-dinner scenario, then into a it’s-bone-freezing-cold-outside scenario, then into a this-needs-to-come-in-gravy-form scenario… then finally, what’s-sausage-gravy-without-biscuits scenarios, and if you must ask “why casserole?”, you have no love in your heart.

I believe such logic is scientifically sound.

So very different from Jason’s request for meat in tubes, in the best of ways, out of the oven came the hottest and most winter-fitting casserole, I for one, could ever dream of. The initial concern that the buttermilk biscuits would be soggy as a collateral damage, completely shattered by their crunchy edges and flaky buttery interiors, floating on top of the thick gravy, bubbling like a pool of love, sharp with tons of freshly ground black/white pepper, cayenne and Dijon mustard. Then in the midst of this epic biscuit-and-gravy love-making, welcomed of course, came the big chunks of apple and fennel breakfast sausages. Gloriously browned, savoury and mildly sweet, every bite of this flaky-buttery-saucy-meaty orgy was the ultimate December-lust. If you think this is starting to sound like a very dirty dirty dish, you did not misunderstand.

Don’t bring this to people who you don not want to see more of.

But perhaps I got carried away… my point at the end of this reflection is this. As you can see evidently, that there’s an earnest response plus the will for advancement to Jason’s ludicrous nagging for homemade sausages. But my explicit longing on the other hand, for a Paris apartment in the 6th arrondissement, is no where in sight.

It is clear here who is the better spouse.

A few things that may seem bizarre in this recipe. The buttermilk biscuit-dough is for one, on the drier side (but not at all dry to eat) compared to what I’ve made before, and two, must be frozen before baking. That’s because they do need to sit on a puddle of wet gravy during cooking, and we don’t want the bottom or the interior to be too soggy. Then the ground pork shoulder, also, needs to be borderline-frozen before using, because in order to get that “bouncy” texture of sausages (not just “meatballs”), the fat needs to be very cold to prevent melting when being emulsified with protein/meat. It’s science. I did not make this up. And speaking of fat, the ground pork shoulder must be around 30~40% fat, or else the sausages would be sadly woodsy. At this point if you must know, the casserole would be equally delicious if you want to skip to store-bought sausages. It would just be less cool…

The sausage recipe is roughly adapted from Tasting Table. 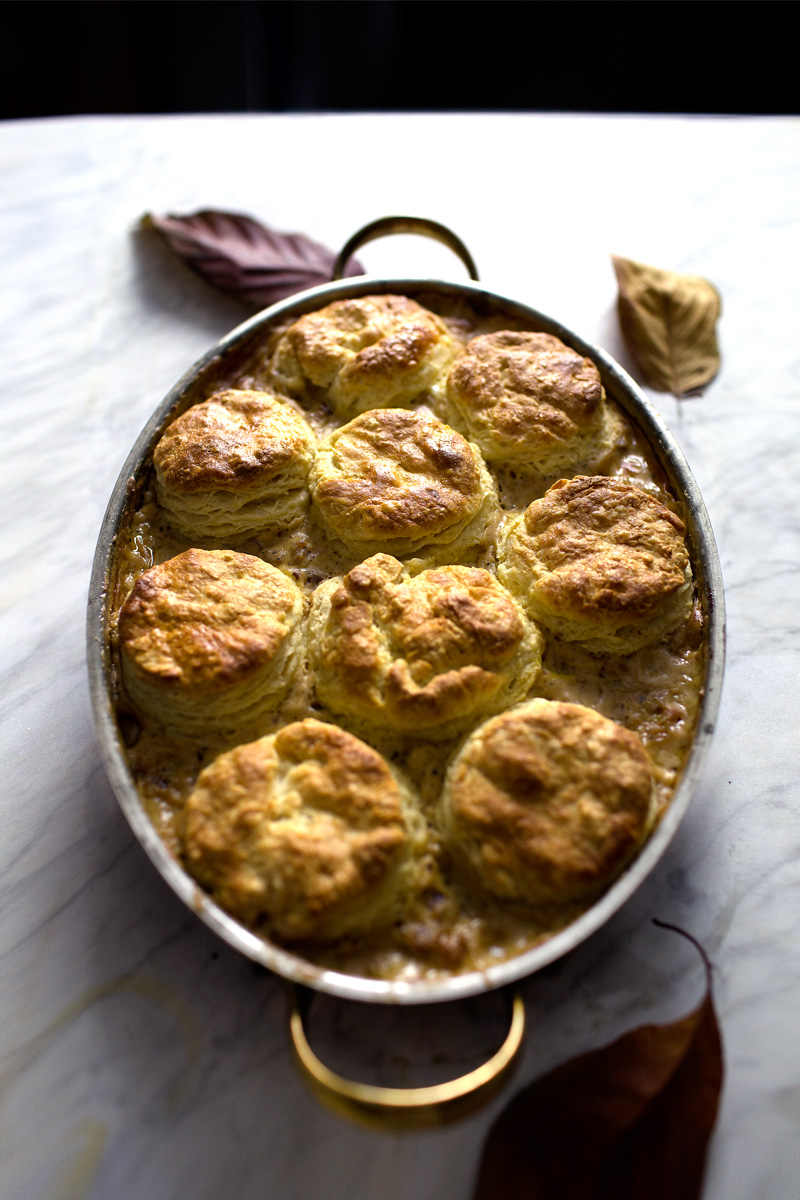 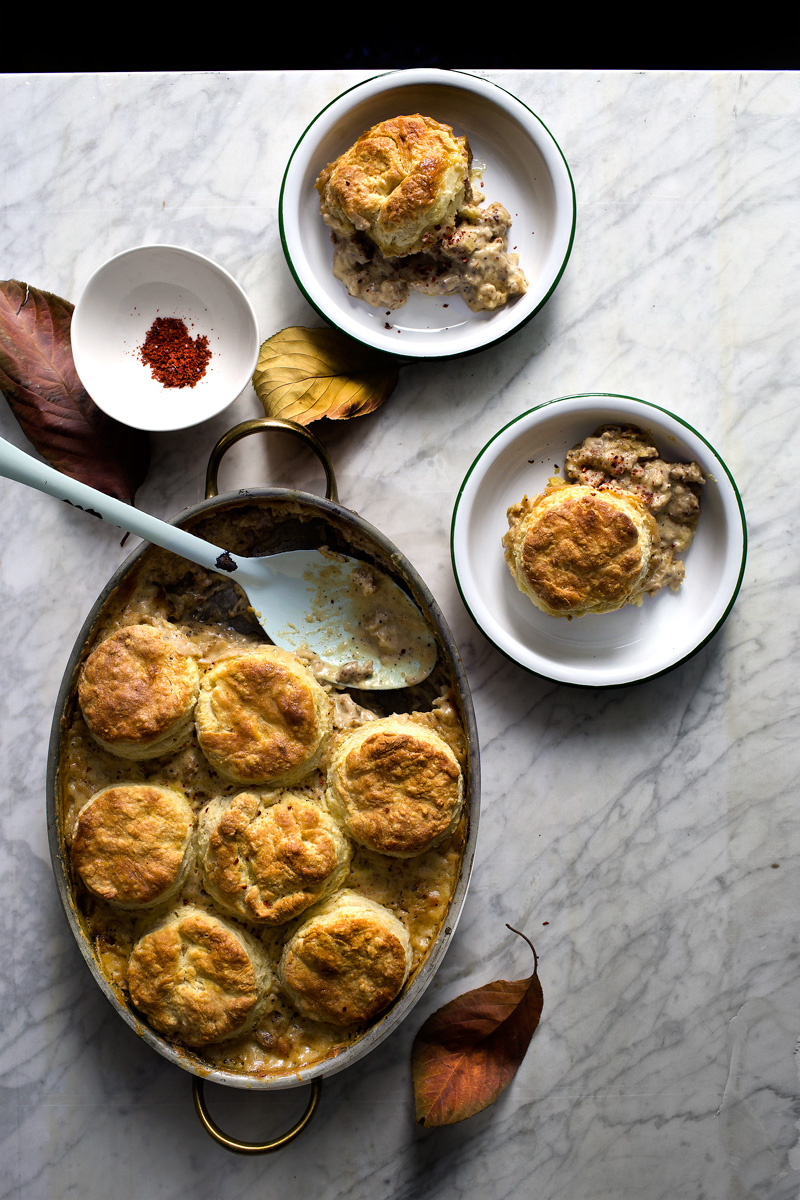 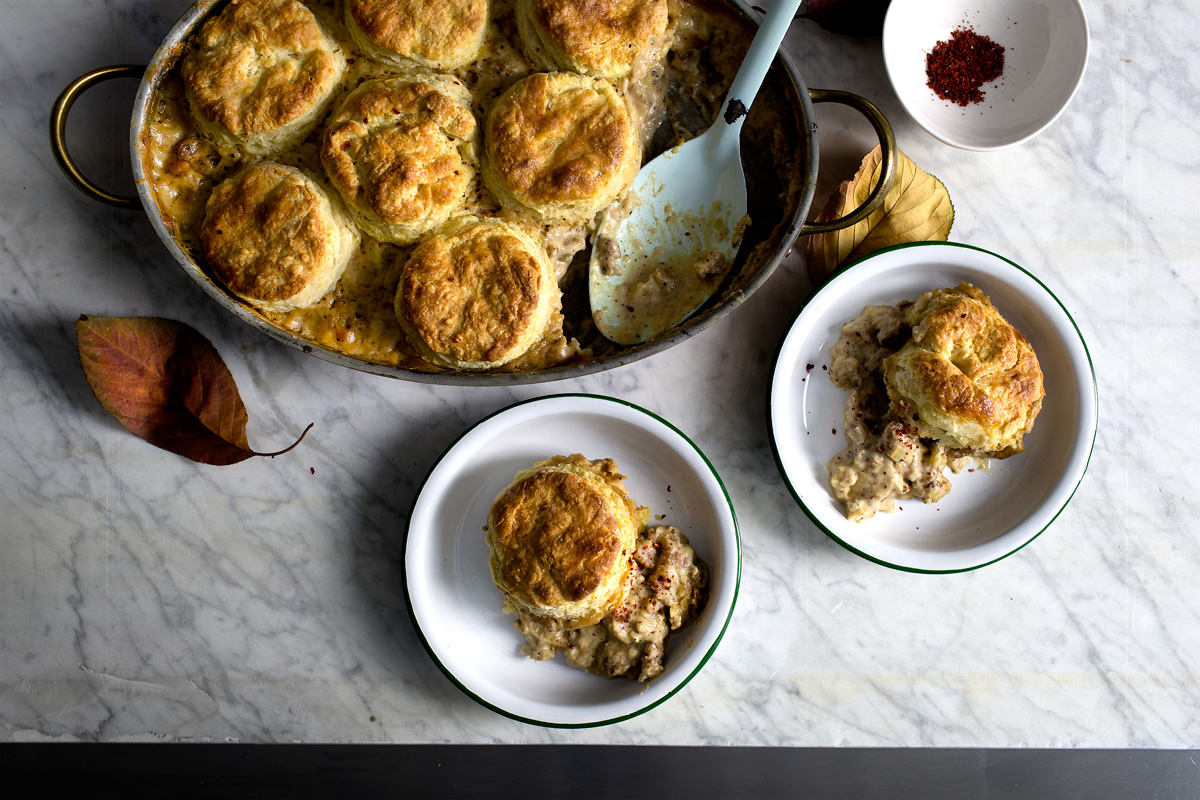