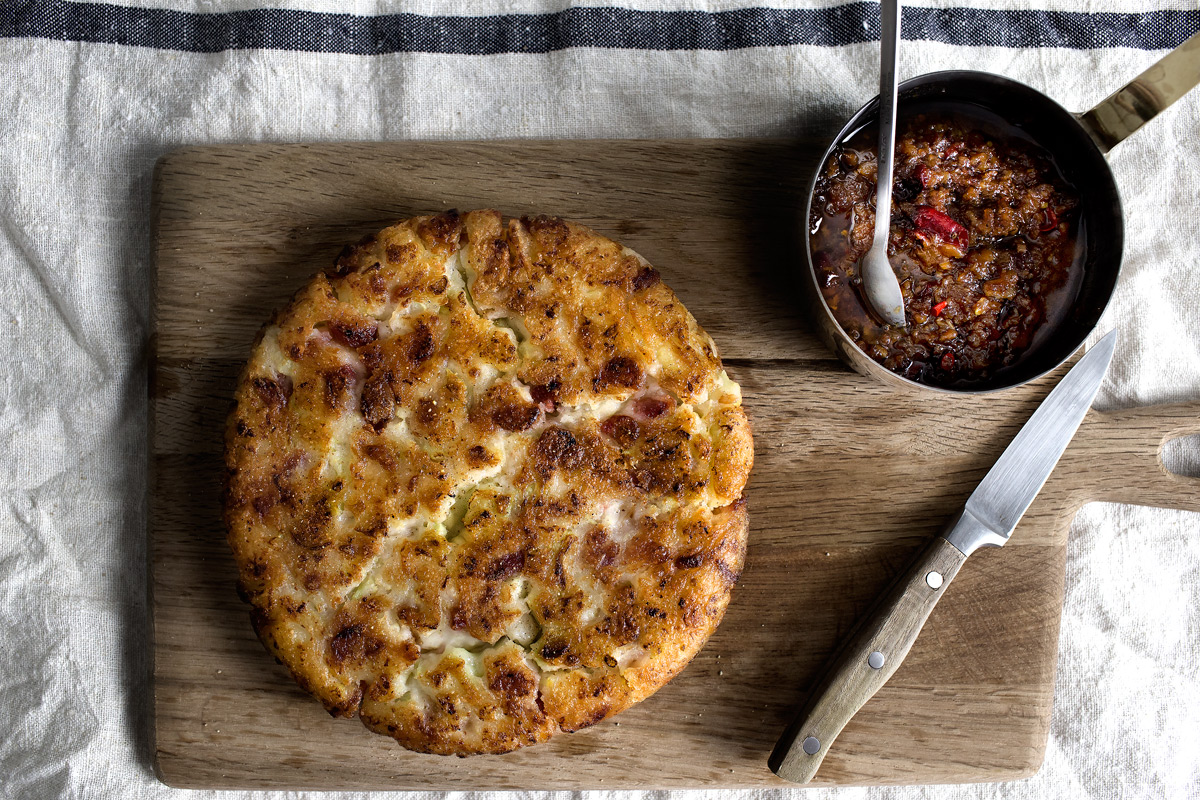 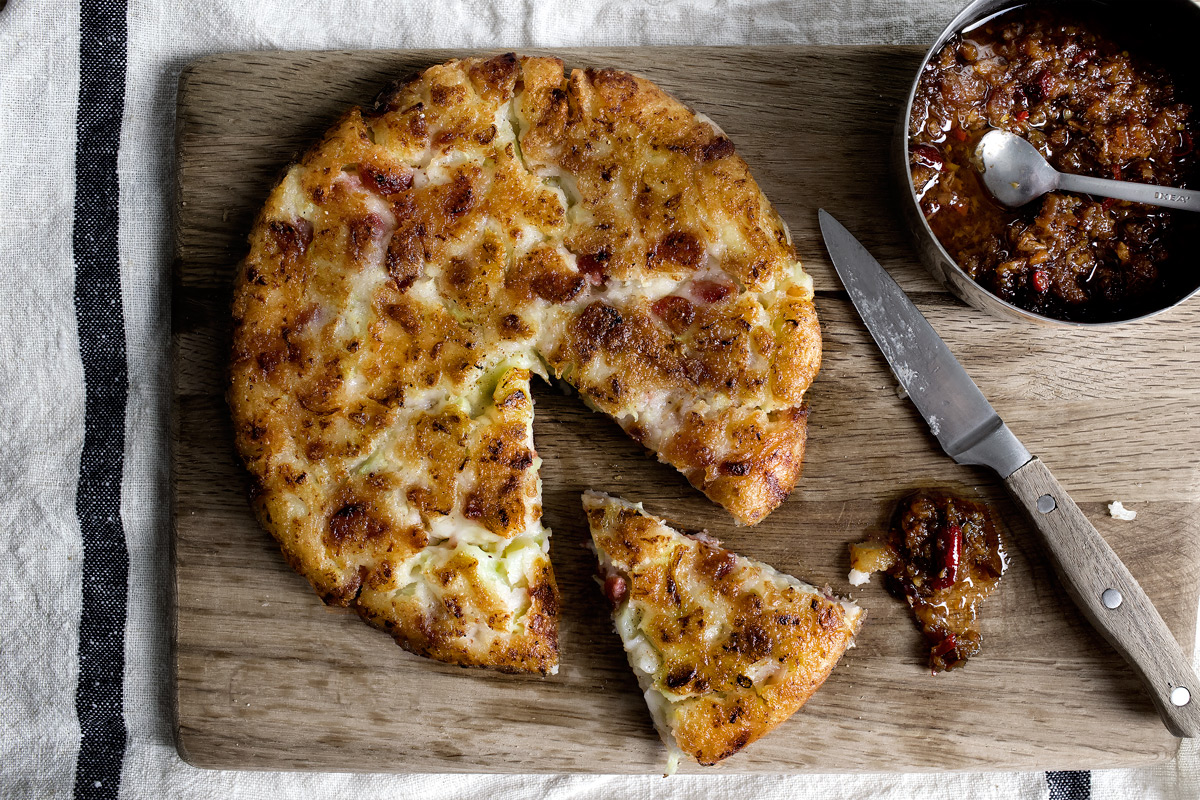 Have you had Chinese turnip cake with X.O. sauce?

Well, the thing is, you probably have without knowing.  Over the dizzying array of small dishes on a dim-sum table, your friend passed you a plate of square white cakes with browned and crispy exteriors, served with a small oily dollop of brownish condiment.  You ate it, mmmmmmm…., probably even asked for the name of the dish, but let’s be honest, who the hell can remember any names from a feeding-frenzy over a dim-sum table?

Well, that, my friend, you just had Chinese turnip cake and its side-kick, X.O. sauce.

I’ve been long trying to come up with a X.O. sauce recipe.  X.O. sauce, suggested from the name given, is made with a large proportion of expensive ingredient, being soaked and shredded dried scallops, and thus lands as a prestigious condiments on the table of Chinese banquette.  It’s usually served in small spoonfuls, as an intense, savoury and spicy flavour-booster to highlight stir-fry dishes, rices and noodles, or dim-sum classics such as the turnip cake.  It’s wonderful.  I love it.  So why not just make that?

Well… I mean, dried scallops are great.  Fancy stuff.  One of those things that are pocket-burning to buy, a pain in the ass to prepare, and in the end of course as all fancy stuffs must be, highly fucked-able.  One miss-step in the prepping and cooking procedure, what was supposed to make this sauce supremely “X.O.”, will also easily turn it into a pile of rubbery and teeth-flossing donkey-hide.  In this particular juncture in my life where several “bad apples” are on the brink of collapsing, I’m not going to risk my iphone 6-fund on something that could potentially malfunction, too.  Especially, not when I believe the beauty of X.O. sauce could be replicated with ingredients that are more, literally, down to earth.

Instead of shredded dried scallops, I’m using dried shitake mushrooms.  In combination with dried shrimp which is also a traditional ingredient in X.O. sauce, this poor man’s version came out well beyond my highest expectation.  It’s robust, complex and intense, embodying the sea-essence from the dried shrimps and oyster sauce, as well as the earthiness of mushrooms and ham.  It’s a symphony of notes that cannot be described unless personally experienced.  And it’s my next it-sauce to be slathered on a bowl of rice, a quick slurps of noodle, or if I’m feeling like going the extra mile, this cauliflower rice cake.

Wait, what happened to turnip cake?  Because I’ve also, long been trying to come up with a turnip cake recipe.  Turnip cake, suggested from the name given, is made with a large amount of Chinese turnip aka daikon, along with Cantonese sausage, dried shrimps, and a batter made with white rice flour.  It’s usually steamed inside a rectangular mold, then sliced and browned over a hot skillet right before serving.  A humble, homey and delicious staple that’s as beloved as anything can get if you came from an Asian background.  It’s wonderful.  I love it.  So why not just make that? 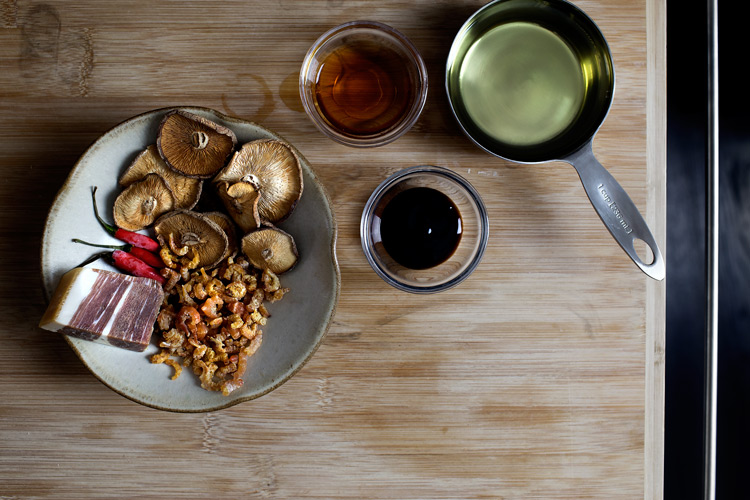 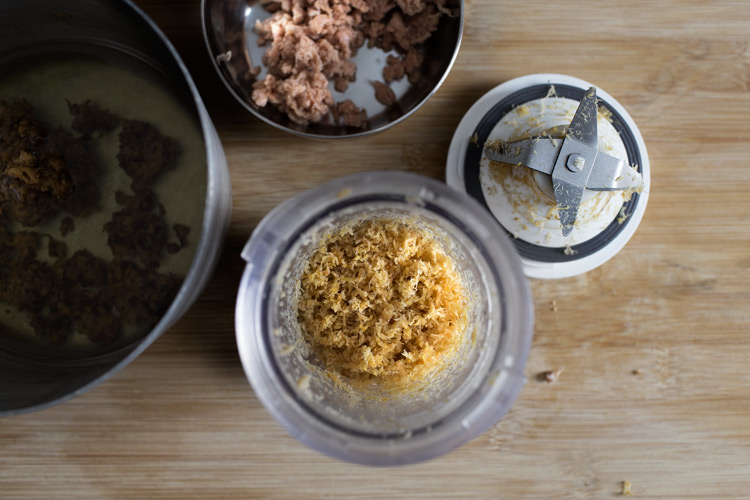 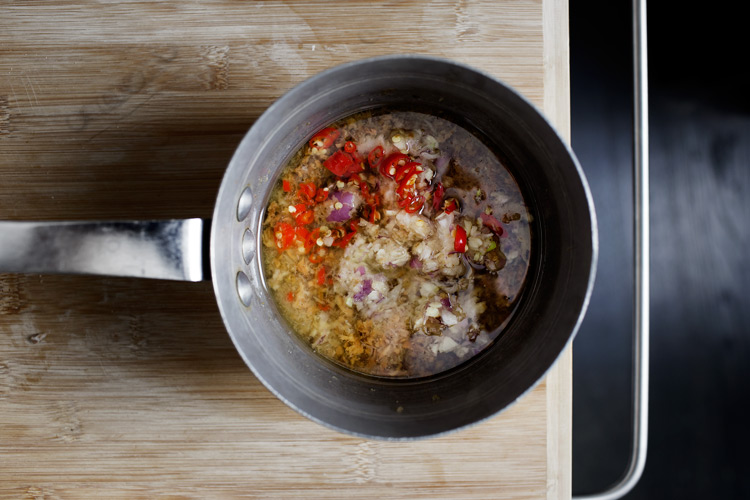 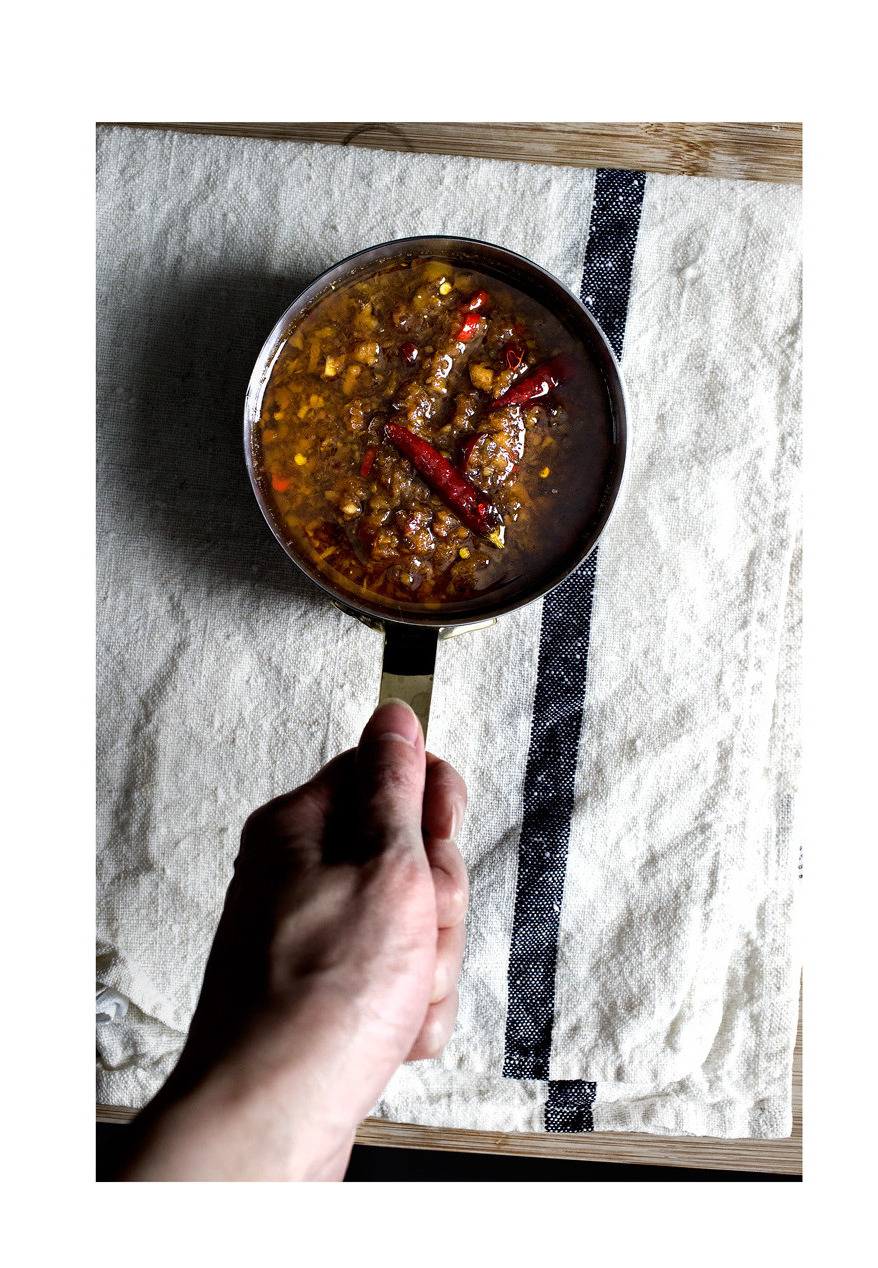 Arrgh… the thing is, Chinese turnip/daikons are great.  Good stuff.  One of those root vegetables that are expectedly sweet like others, but outstandingly “juicy” and refreshing.   Grated raw, it serves as a grease-cutter in both Chinese and Japanese fried dishes.  Cooked in chunks, it soaks and marries with whatever flavours from the sauce or soup that it’s cooked in, and like many other Asian produces these days, it’s becoming more and more common even outside of Asian grocery stores.  So I trust that you have at least seen one, in person, at some point during your stroll down the produce-isle.  So you’ll know that… they’re huge.

Chinese turnip/daikon is, easily, the size of 5 carrots combined.  They are the Shaquille O’neal of turnips.  One single dish will usually require half, at best, of a single daikon, and I often struggle with the other half that is too white and too big to ignore in my already over-stuffed fridge.  Which is exactly the reason why, I never buy them.  Especially, when I know the beauty of turnip cake, could take a different perspective with something more user-friendly and equally delicious.  Cauliflowers.

I love cauliflowers.  I think they are one of the sadly under-utilized vegetables out there, waiting to be tapped for its many potentials, such a now when it fits perfectly into the vacuum created by my unwillingness to buy a whole freaking daikon.  Its subtly sweet flavour, soft but sturdy texture, works superbly as a substitute and gives this Chinese classic dish, a surprisingly but not disruptive spin.

People, this is a dish that will dim (touch) your sum (heart).  This recipe bypasses the traditional time-consuming method of steaming the cake inside a mold, and instead, is made directly from a batter.  The generously filled rice cake is soft on the inside with sweet bites of cauliflower and fatty Cantonese sausages, then crackly and crispy on the outside as the entire “pie” sets and browns over the hot skillet.  Just when you think something as complete and satisfying as this doesn’t need much more to please the palette, a dollop of poor man’s X.O. sauce swoops in and you realize, there is great, undeniable wisdom in this traditional pairing.

You thought you like your designated dim-sum place?  Well, it can’t touch this. 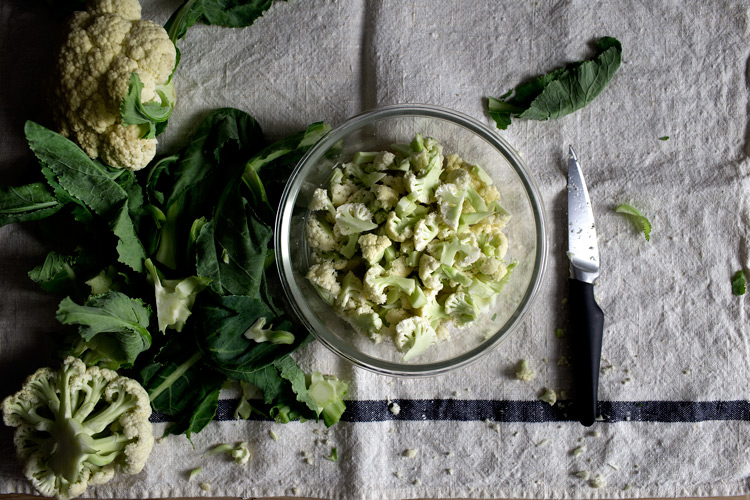 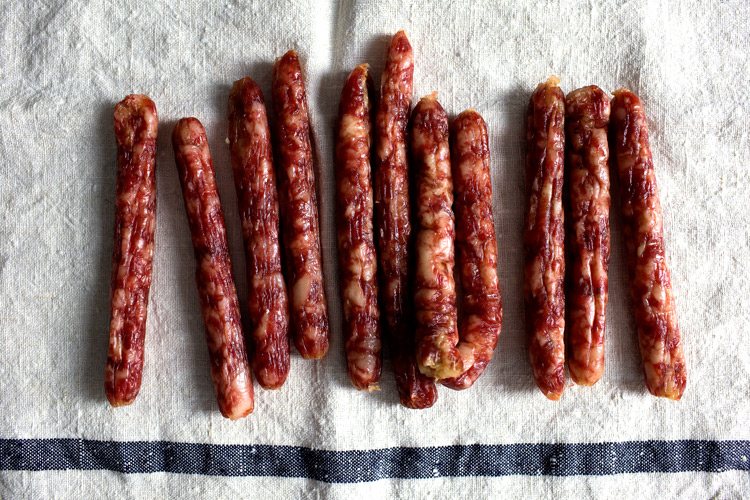 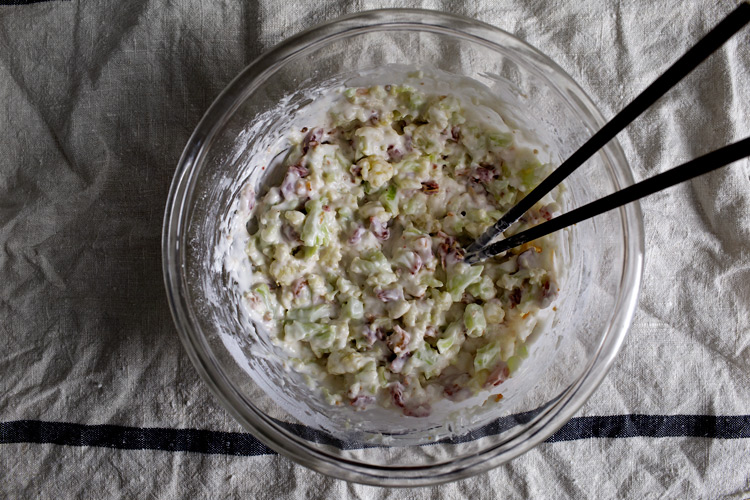 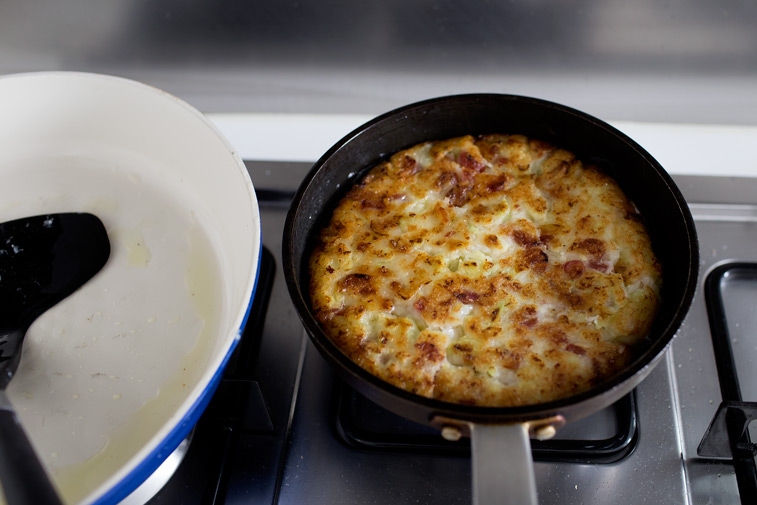 Traditionally, lo-bak-g0 or luo-b0-gao (turnip/daikon cake) is mainly made with white rice flour with maybe a bit of cornstarch.  But this recipe, based on Jacky Yu’s cookbook Xi-Yan, uses almost equal amount of white rice flour and sticky rice flour, to give it a softer texture.

Some ingredients may seem a bit foreign (dried shrimp… Cantonese dried sausage…) for those of you who aren’t familiar with Chinese cooking, but they are all easily purchasable in Asian grocery stores.  I keep my dried shrimps in the freezer which lasts like forever, and they are crucial in dishes like laksa, or this one-pot wonder, and several Chinese condiments such as X.O. sauce.  Dried shitake mushrooms are the most common variety of dried mushrooms in Chinese cooking, but you can substitute with dried porcini or other varieties you have on hand.  The links to the white rice flour and sticky rice flour in the recipe, are both the brands from Thailand that I used, but you don’t have to use the same brands.

You can of course use Chinese turnip/daikon instead of cauliflower, in the same amount, in this recipe. 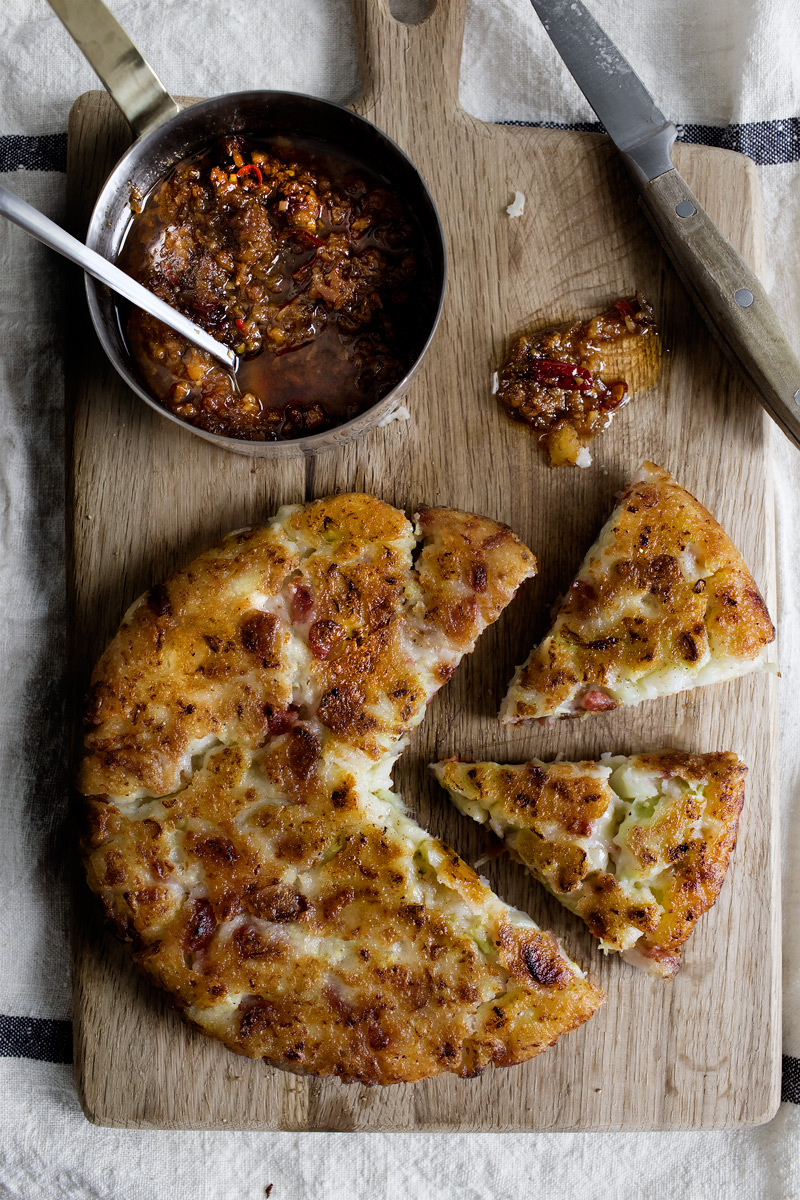 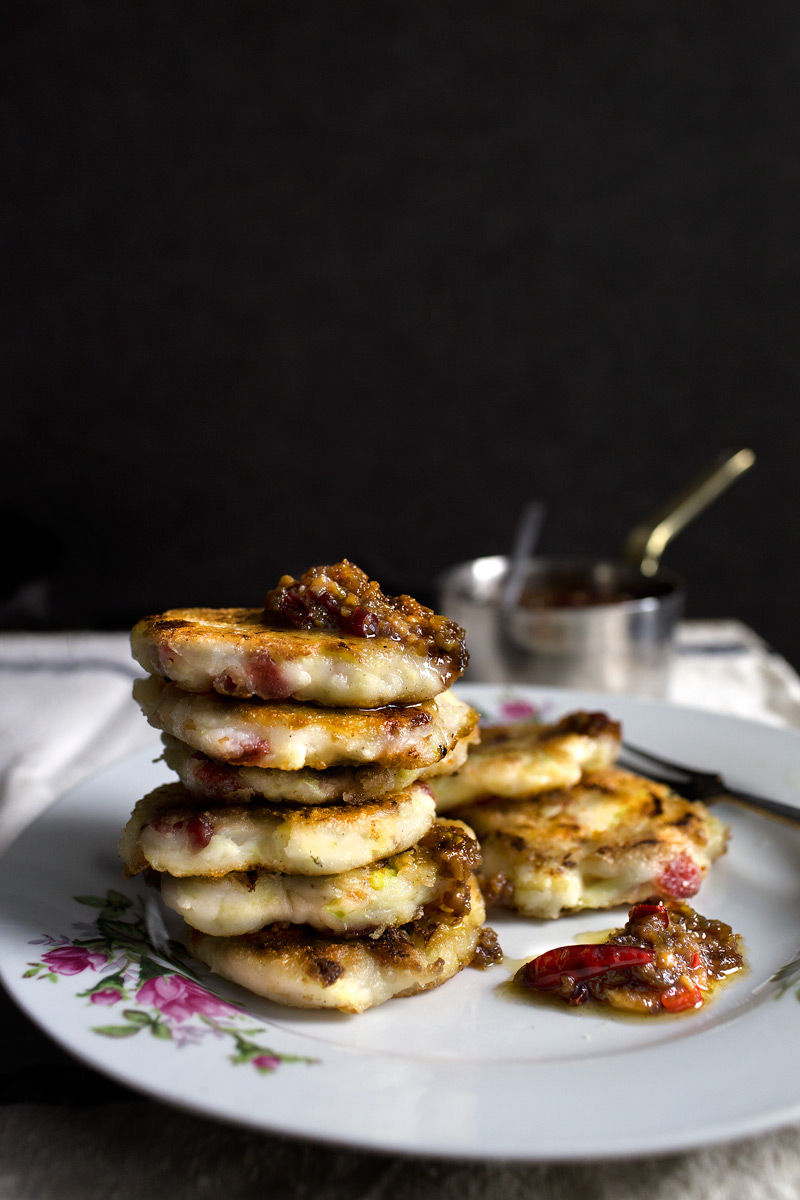