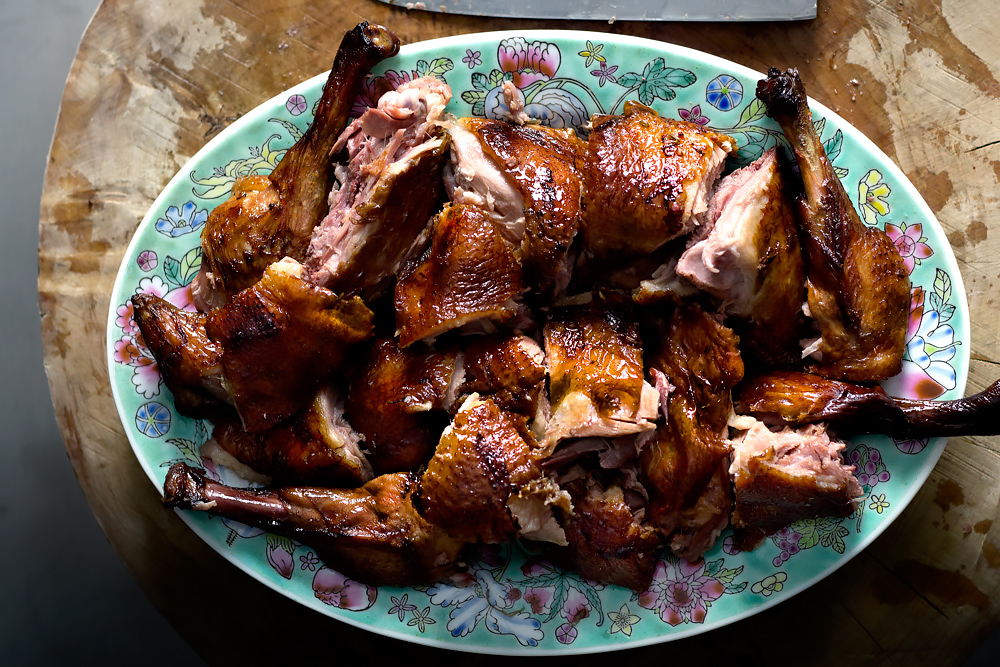 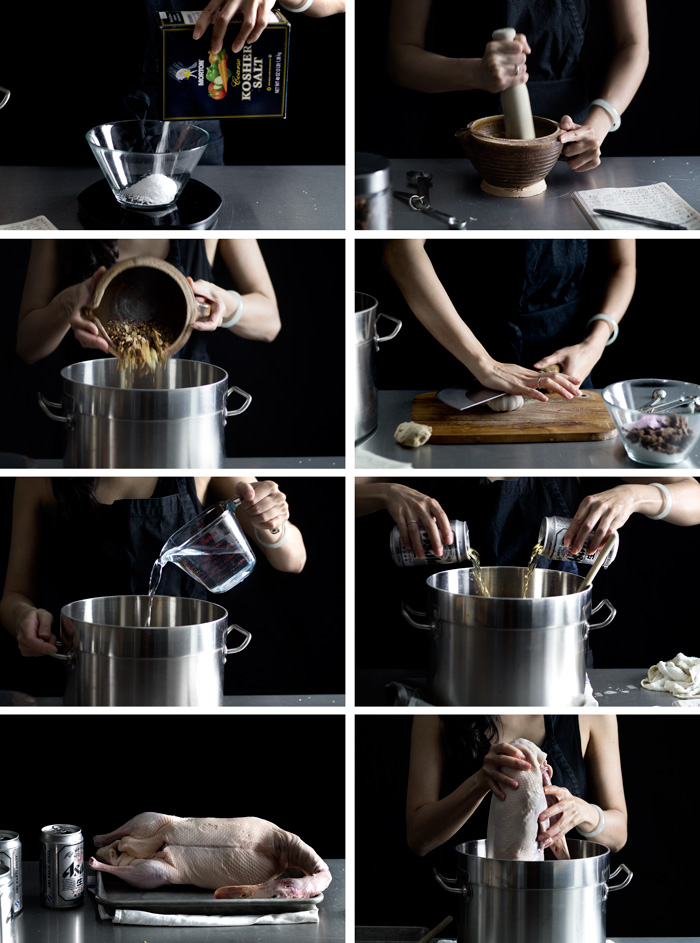 IF YOU CAN POUR YOURSELF A HOT SALT BATH, THEN MOVE INTO SAUNA TO SIT STILL,

YOU CAN ROAST THIS DUCK

TODAY, I’m here to answer the question that has long infected the everyday-home-kitchens, with unending fatigue and boredom.  The underlining puzzle that, as a result, has put the other undeserved, pale and bland poultry, onto the seat of power in the dinner-menu arena for far too long.  The question that we, if we say we love foods at all, should all ask ourselves…

Why are we so scared of ducks?

I mean yes, they are physically slightly larger than the other poultry – chickens – which has enjoyed unchallenged dominance in the everyday kitchen-politics, for reasons that are insufficient at best.  For one, the only difference made by the small increase in size, is an increase in cooking-time that requires no additional effort from you.  Second, that effort-that-you-didn’t-really-have-to-make, will buy you incomparable rewards in flavours, succulency, and rest assured, rock-star-level wow-factors.  So despite the many… almost universal disagreement I hold with this happiness-forsaken country, I got to admit that they do, do one thing right.  They know how to do their ducks.

To the surprise of many, I’m not talking about the widely published, sometimes overrated national dish, Peking duck, focusing on achieving slices of dehydrated crispy skins at the expense of often dry and woodsy flesh (most leftover meats and bones are later used in stir-fries and stocks).  As you can see if not clearly enough, I have only disdain for authoritarian rule over the majority.  Instead, I’m here to talk about a new discovery I recently made on humble street-establishments, from hole-in-a-wall-like vendors, selling what they call, the aromatic beer ducks.

What differentiates “people’s” beer duck from “Peking” (old spelling of “Beijing”) duck, is the celebration of equal rights and voices for all parts of this under-appreciated animal.  No meat, leg or wing, has to subject to the dictation of achieving a dehydrated crispy skin.  The entire roast duck is eaten as a balanced festival of juicy, luscious and flavourful off-the-bone meats, under salty, succulent, non-obsessively crispy and gelatinous skins.  If you have only tried a taste of this beer duck, you wouldn’t give a shit about Peking anymore.

To my and perhaps your surprise, the recipe for something so gastronomically rewarding and visually impressive, is surprisingly simple.

If you are physically and mentally capable of pouring yourself a hot salt bath, then moving into a sauna to sit still, you’re physically and mentally capable of roasting this duck.  Because that, is really all there is to it.  First, make a salt-spice brine, difficulty of which is equal to boiling water.  Then, with lack of better elaboration, you put the duck… in the brine.  What comes after will sound really boring but, you then leave it alone for 18 hours.  Go to work.  Join a protest.  Whatever.  After which of course, the climax finally comes, as you skewer the cavity-opening together with toothpicks, then roast the duck in a preheated oven, with very little attention needed, for 3 hours.

Then this, shall come out of the oven, for you.

Seriously, if you think this beer duck, is not worth just that.  I sincerely wish you and chicken breasts, a happily-ever-after. 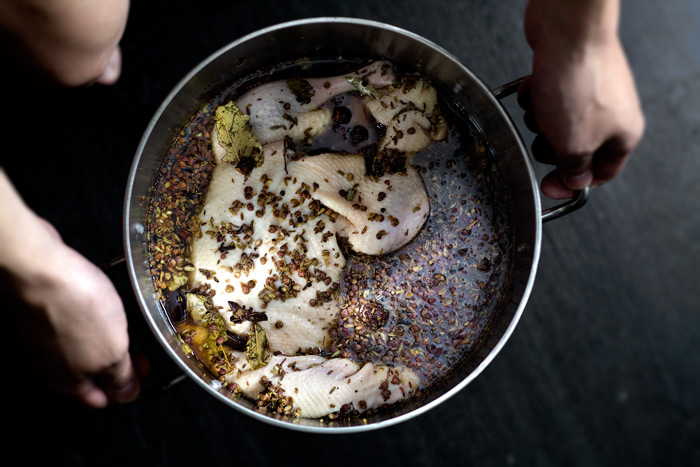 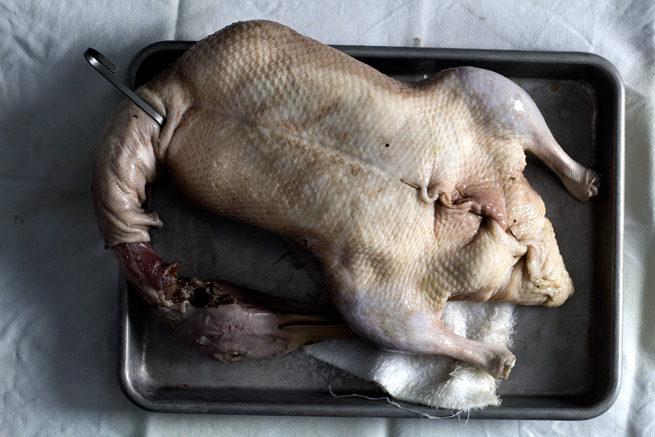 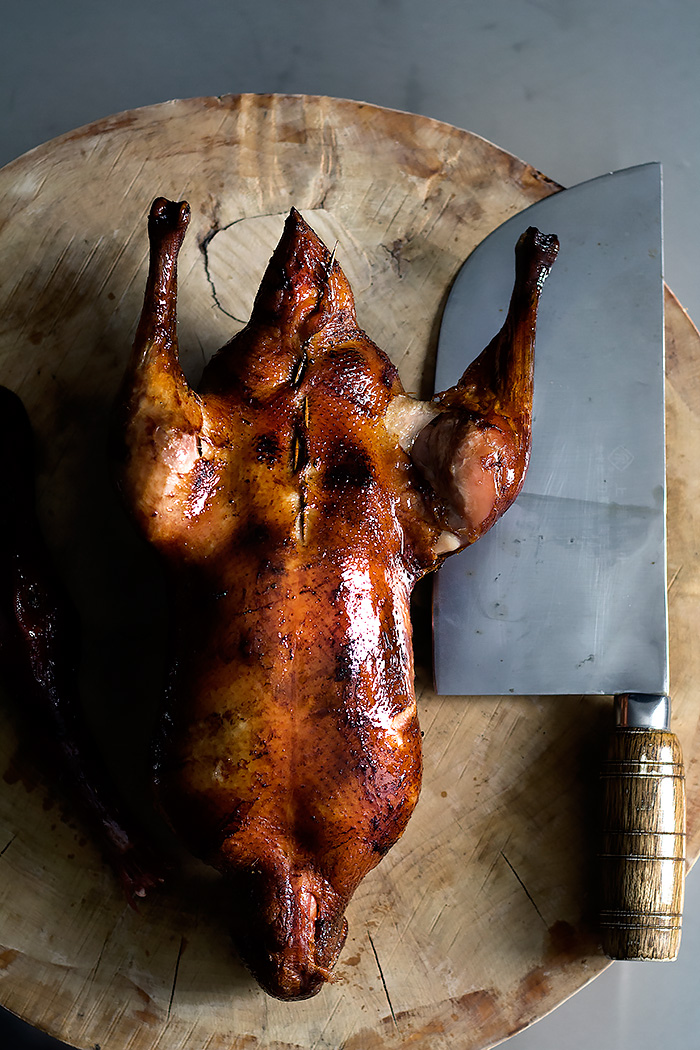 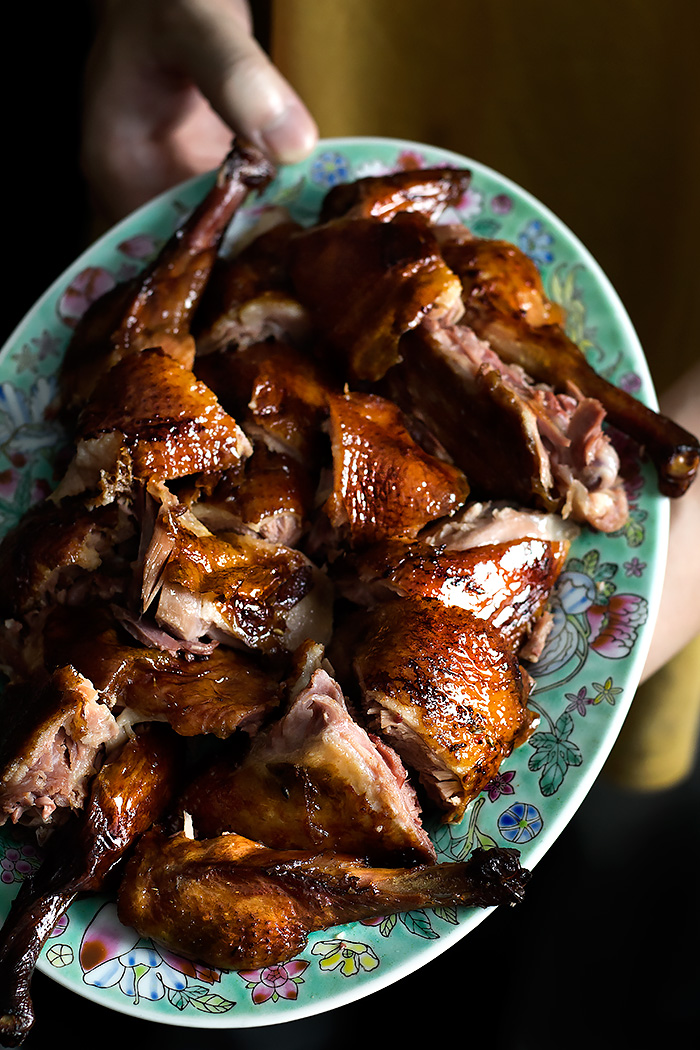 If you want to just do a simple salt-brine, or salt-brine with herbs of your choices, the duck will roast and come out fabulously anyway.  Speaking of salt-brine, please, weigh the salt.  Don’t measure by volume.  Different salts vary largely in density, and there’s just no way for accuracy if you measure by volume.

Ducks… all poultries for that matter, purchased in Asia, come with neck and head attached.  I mean why shouldn’t they?  There are perfectly succulent meats and skins attached to this part of the body that were well exercised and too good to waste.  But if your duck, sadly, comes with nothing from the shoulder up, then before roasting, use toothpicks to sew/seal the skins around the neck-openings together, to keep the breasts moist.

To brine the duck:  Use a mortar or spice-grinder, pulse “the spices” until they are coarsely ground.  Combine the ground spices, water, whole dried chili, salt, dark brown sugar, granulated sugar, smashed garlic and ginger slices in a large pot.  Simmer the mixture on medium-low heat, with the lid on (to prevent moisture loss), for 30 min to release the fragrance from the aromatics.  Turn off the heat and add the cold beer.  Once the brine has cooled, submerge the duck in it and keep inside the fridge for at least 18 hours, up to 48 hours, turning the duck once if necessary.

Clean off any spices sticking on the skin or inside the cavity of the duck (rinse with a bit of water if you need to), then pat the duck as dry as you can with a clean towel.  Use 2~3 toothpicks to sew/seal the skins around the cavity-opening tightly together (as pictured), to keep the inside moist during roasting.  If your duck comes without neck and head, sew/seal the neck-opening, too.  Brush the duck evenly with shaoxing wine (or Italian grappa).

Roast the duck for 3 hours until golden browned and glorious, turning it once or twice accordingly for evenness.  If at the last 20 min, it looks like it needs a boost, turn the heat up to 375ºF/190ºC.

Book Bait: The Hulk, Dry-fried Green Hot Wings
LET'S FILL THAT BOWL ON THIS SUPER !!!
BEEF TARTARE WITH SEA URCHIN FROM THE NEIGHBORHOOD