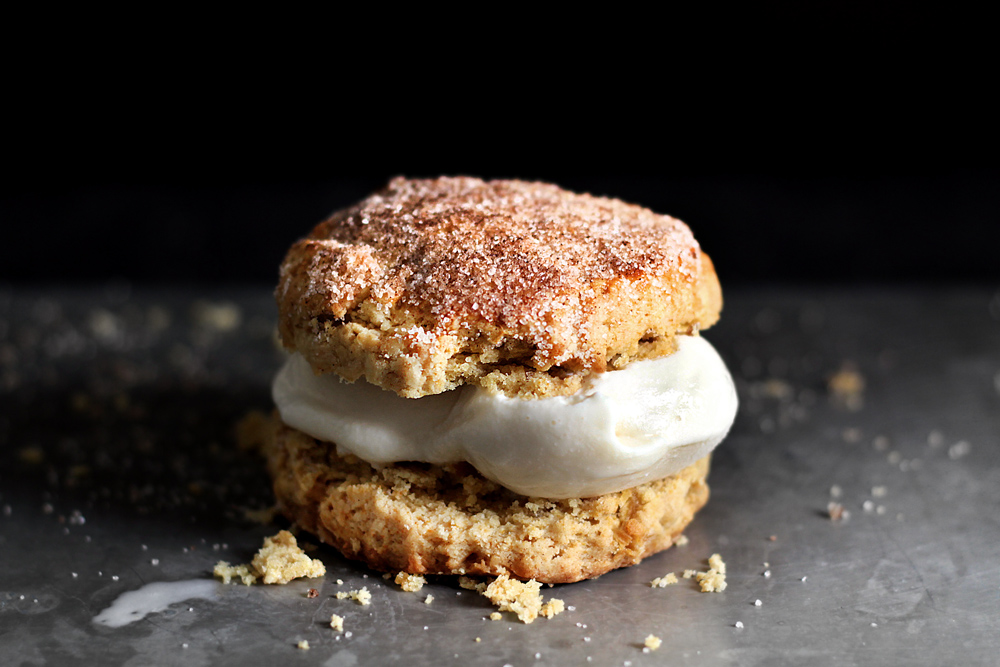 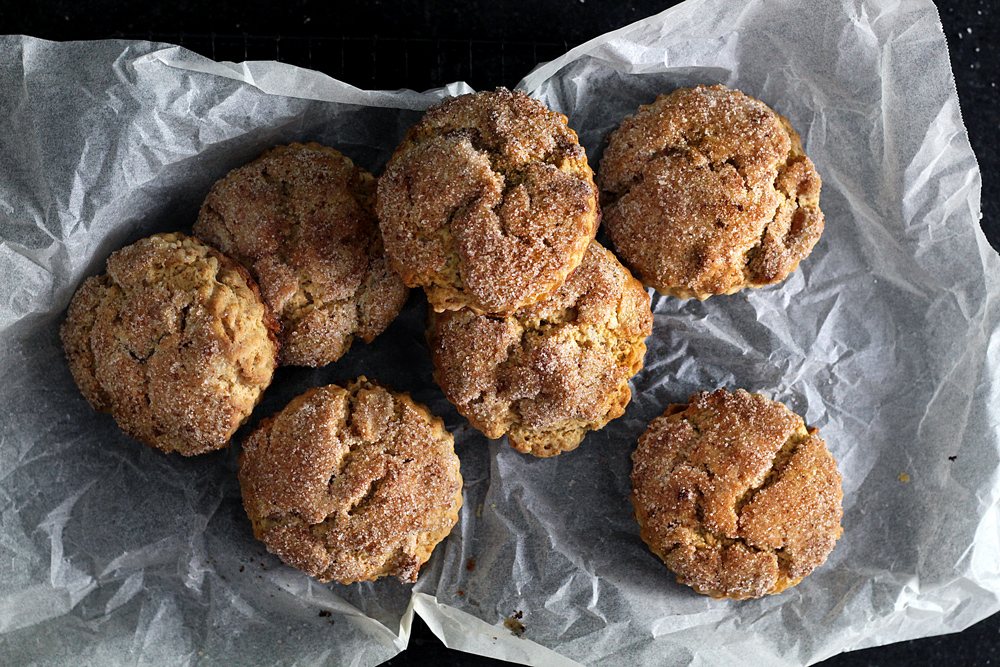 I’d like to think that I make happy foods.  I’d like to think that to the people wondering to this place, who are just one kale salad-away from opening a suicide.word, a fast responding blueberry oatmeal cookie, in some ways, is a contribution to humanity.  I’d like to think that to you out there who voluntarily devotes to a gluten-less life, though beyond my shallow comprehension, must have had your profound and keen purposes… the unintentionally gluten-free mochi donut is my gentle way of saying, I don’t get it but hey let me get you a donut.  Then of course, when all else fails, the sky is falling and all balls are tucked, a full frontal of a pornographic burger wouldn’t be the worst thing to remember last, before quitting it, whatever it is, all together.

But this theory has been testing quite unsoundly in my personal life-lab in the past week (previously on…), mostly due to my neurotic anxiety who has a very inappropriate humor of its own which has proven to be funnier than eating. 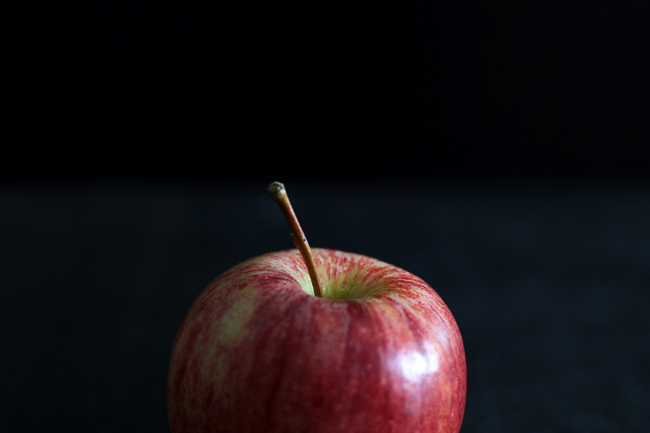 Just to be clear, this is not where I brag about thing, but I’ve been cruising effortlessly through the most successful and effective, week-long fasting program that normally only Beyonce can pull off, and finding it a little… bittersweet.  This would have otherwise been a great news, a long-planned and awaited reunion with my dormant human-shapes, unfortunately just not in the optimal scenario as I envisioned it.  Don’t get me wrong, waistline, you look fabulous but fuck I look like shit.

MY ANXIETY… HAS A VERY INAPPROPRIATE HUMOR OF ITS OWN 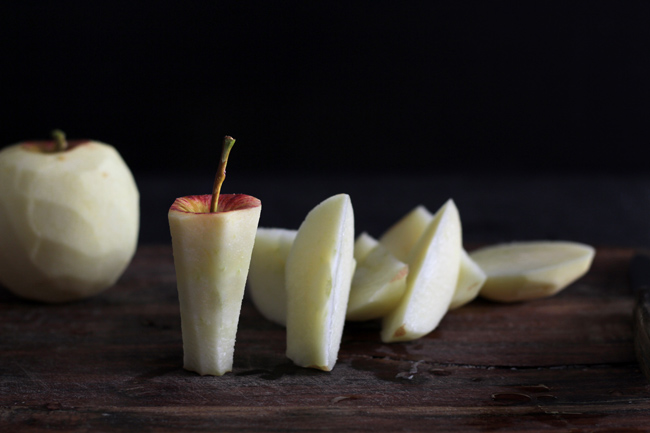 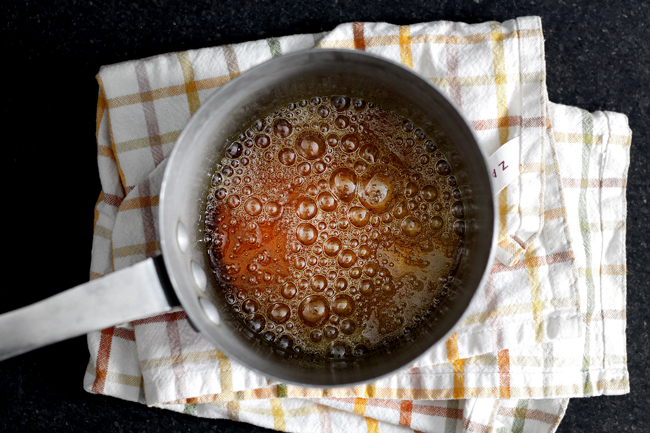 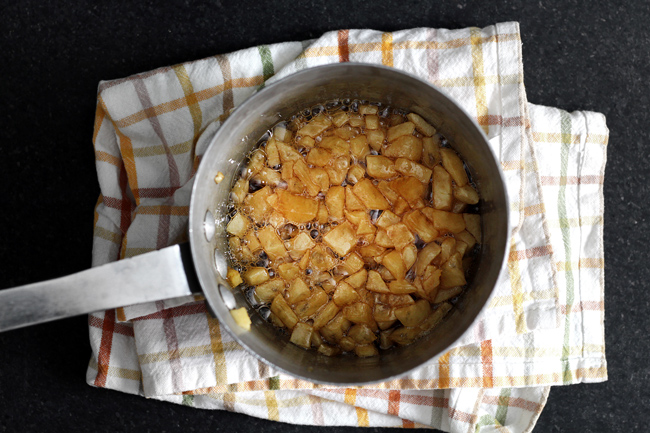 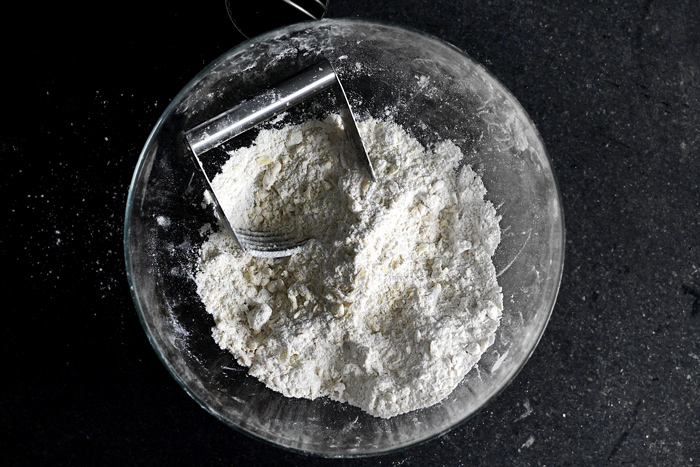 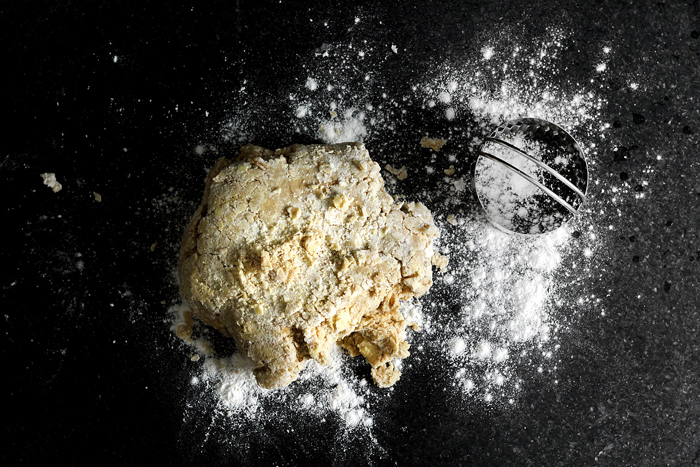 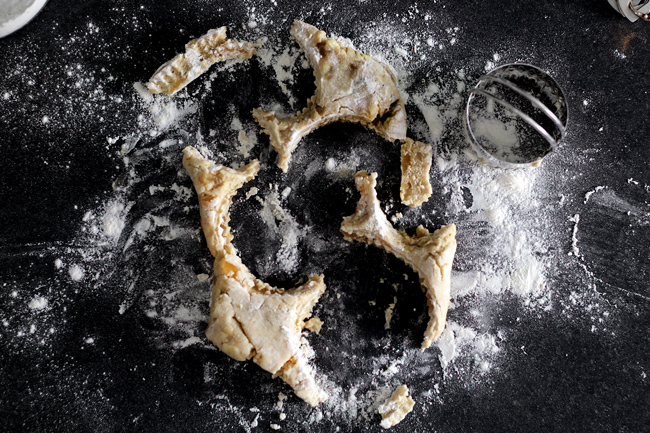 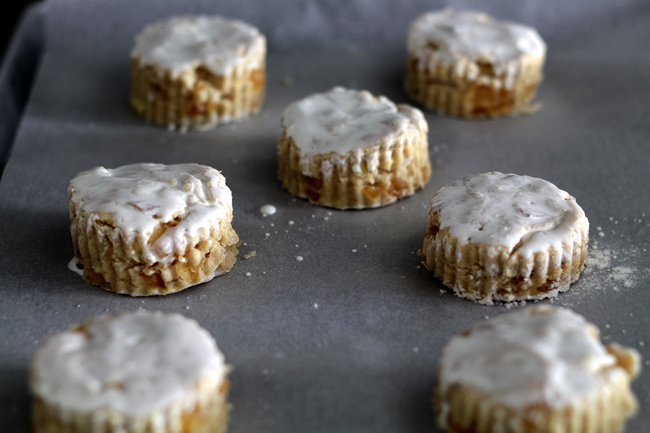 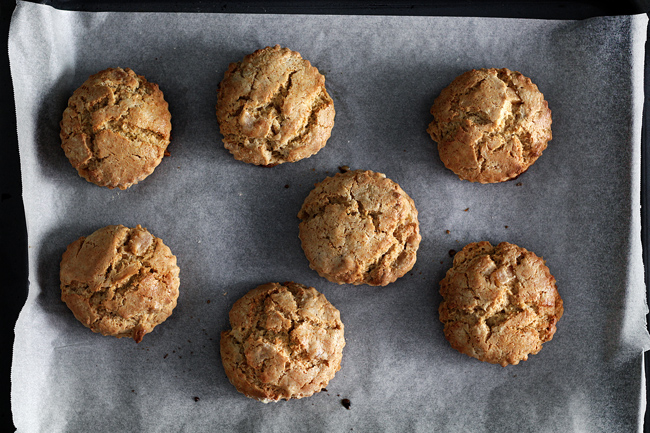 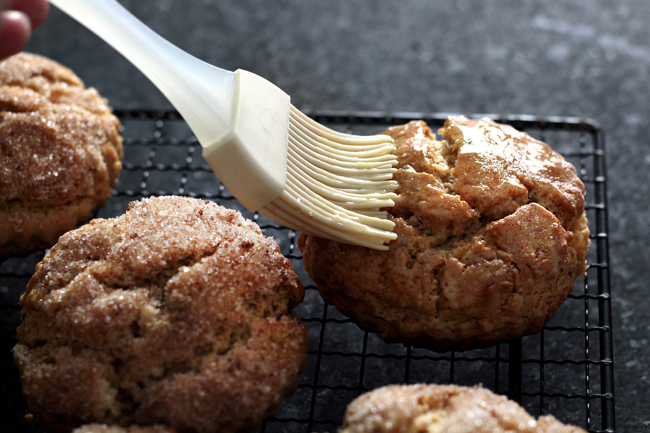 So in a desperate effort to restore such theory, I’ve embarked on a mission to make the happiest food alive.  Given that this is high pie-season, what’s better than something that, even just by the sound of its name, incandescently cheerful – the all American apple pie.  Hey, I figured if it’s happy enough to have sex with, it’d be sufficient for my condition.

But having said that, I have to be acutely aware of the danger of what a pie-making disaster can do to a fragile state of mind.  These crusty, happy-sounding fellas can be, more often than not, little mean soggy bi-polar bastards.  Best not to go there for the sake of my livelihood.  Instead, I’m going to impose the happy ideal of an apple pie onto these much faster, easier, and above all else, less disaster-friendly folks.  I’ve decided to turn it into biscuits.

So there I found myself in a gloomy, bleakly spirited afternoon, clinging over the edge of the kitchen-counter gulping down dose after dose of buttery crumbed biscuits that are sweetened with salted caramel and twinkle-lighted with soft, candied apples and warm cinnamon, allspice and nutmegs.  Then it occurred to me that, no, I needed something even more potent.  So I brushed them with melted butter and tumbled in nutmeg sugar.  At this point they were already reaching heavenly goodness but I was a holier mess, and I kept thinking that it just… just needed a litttttle something more…  What is it?  God damn it I had it at the tip of my tongue… 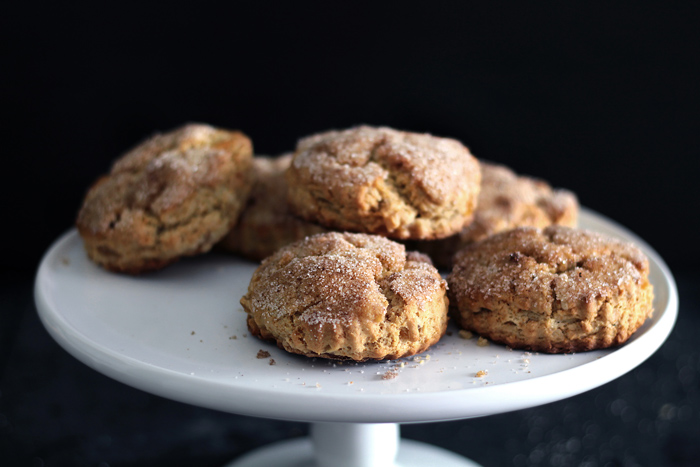 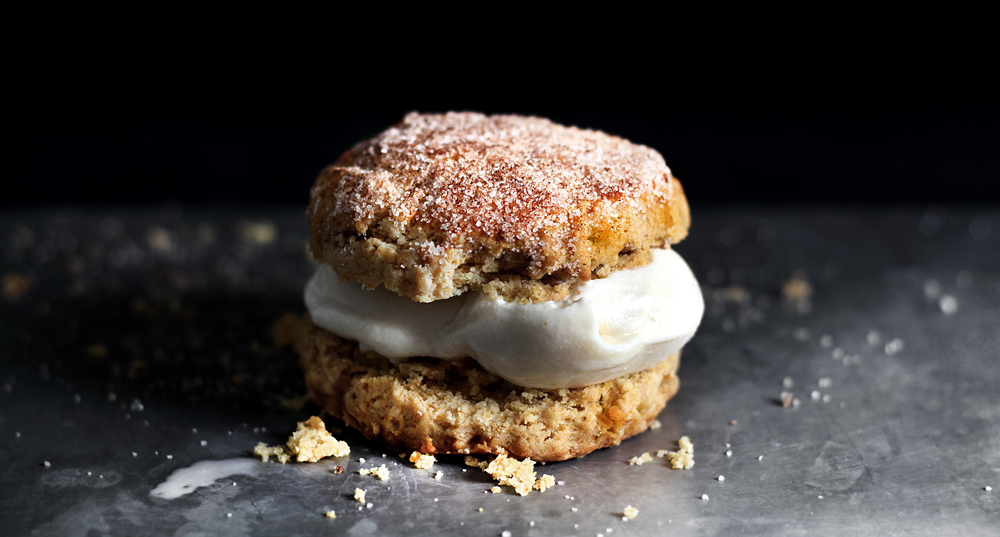 To make the caramel apple/wet ingredient:  In a sauce pot, bring 1/2 cup of granulated sugar and 1/4 cup of apple juice to a boil over medium heat.  Swirl occasionally and continue to cook until the liquid has evaporated and the sugar becomes a rich, dark amber color.  This will take a few minutes.  Then add the small-diced apples and continue to cook over medium heat.  The caramel will harden in contact of the cold apples, so stir with a spoon until all the caramel is melted again.  Cook until the liquid/juice from the apple has mostly evaporated, and the sauce slightly thickens again, approx 7 ~ 10 min.  You should have what looks like about 1/4 cup of liquid in the pot, and the apples should be almost translucent, like candied.

Stir in the sea salt, ground cinnamon, ground allspice, and freshly grated nutmeg.  Then add another 1/4 cup of apple juice and heavy cream.  Mix evenly then chill for at least 1 hour in the fridge, or 30 min in the freezer until cold.

Whisk all-purpose flour, baking powder and baking soda in a large bowl (or you can do it in the food-processor).  Add the diced and cold unsalted butter, then with a pastry-cutter, cut the butter into the flour until the largest bit is about the size of a small pea (or pulse the food-processor until this happens, then transfer the mixture to a large bowl).  Add the chilled caramel apple/wet ingredient, then with a spatula, fold the mixture together until a wet dough forms.  The dough should be wet and sticky.  If it’s too dry with loose crumbs and flour not coming together, add another tbsp of heavy cream.

Transfer to a floured surface and pat into 1″ (2.5 cm) thickness.  If the dough feels warm or even room-temperature (due to the wet ingredient not being chilled enough), wrap in plastic and flash-freeze for 30 min before proceeding.  Cut the biscuits out with a small cutter, then transfer to a parchment-lined baking sheet.  Gather the scraps and cut again.  You should have about 6 ~ 8 biscuits.  Brush the top with heavy cream then baking in the oven until golden browned and puffed, approx 15 min.

Allow to cool for 20 ~ 30 min on a cooling rack.  Brush the tops with melted butter then gently press against the nutmeg-sugar until it sticks.  If you want to slice it open for ice-cream sandwich, use a serrated knife because these are quite delicate. 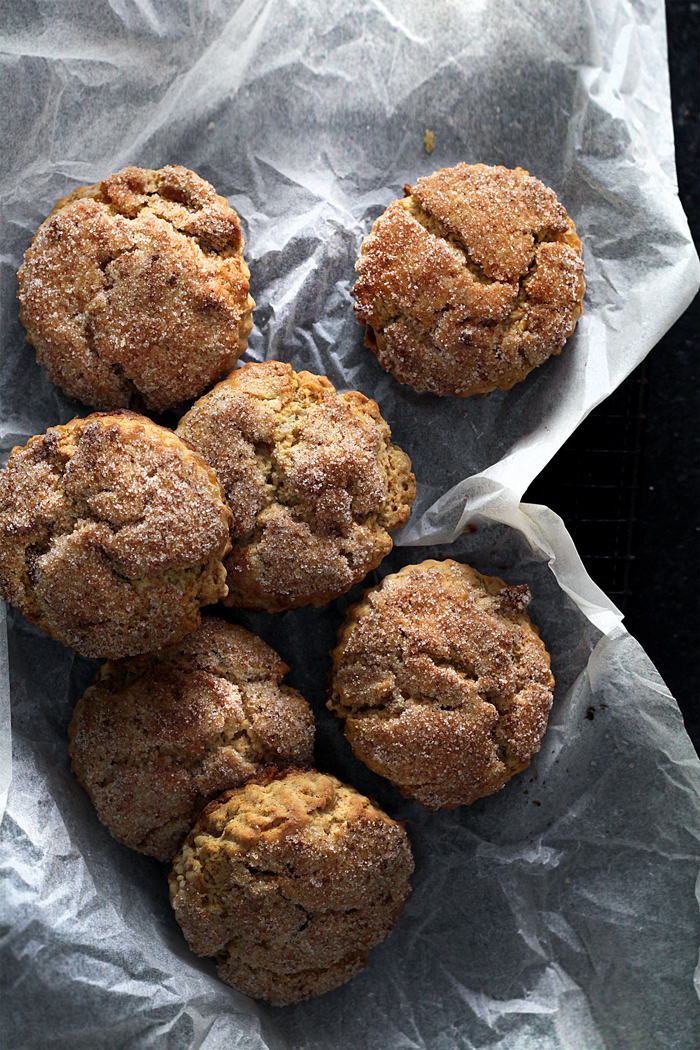