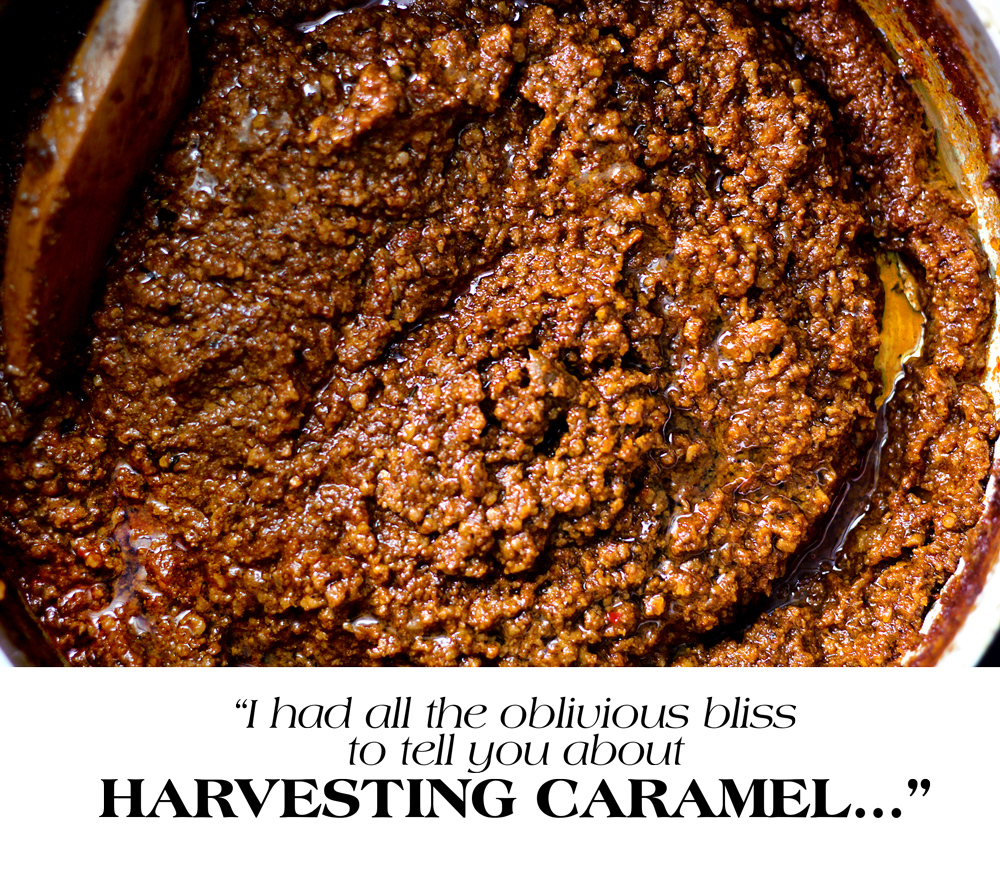 October 28, 2013 In All recipes, Got Nothing But Time, Meat, Noodle/Pasta/Rice 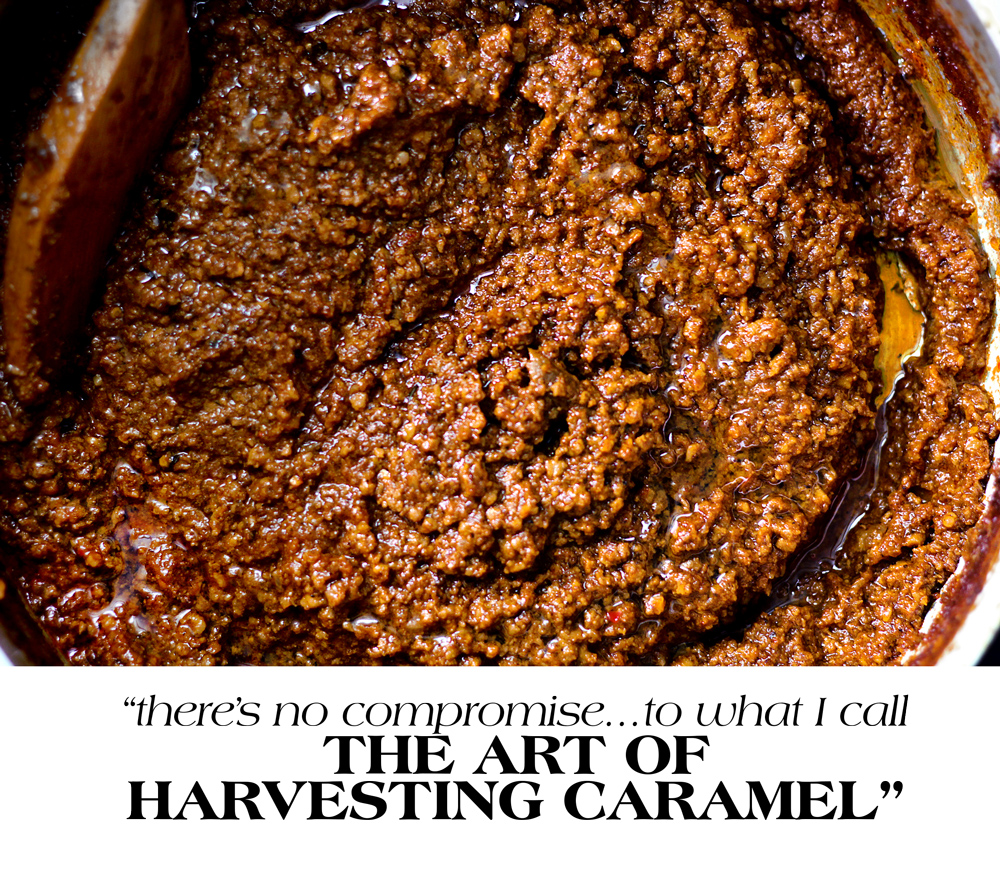 I almost couldn’t wait to tell you all about this hysterically inconvenient ragu.  I started curating its debut so many weeks ago, impatiently waited for the temperature to drop and the first damn leaf to fall, until everything… every single elements in the atmosphere ready your hearts for the most glorious, madly delicious ragu you have yet to try.  I even prepared a number of high-impact vocabularies to describe its entire four hours of making, two of which involves you standing by the stove remorselessly scraping the bottom of the pot in the name of culinary commitment, because I was gonna tell you that there’s no compromise when it comes to what I call the art of harvesting caramel, and you’re going to eat it all up.

The recipe has been sitting in my cue for a week now and I haven’t been able to lift a finger.  Well… you know what happened. 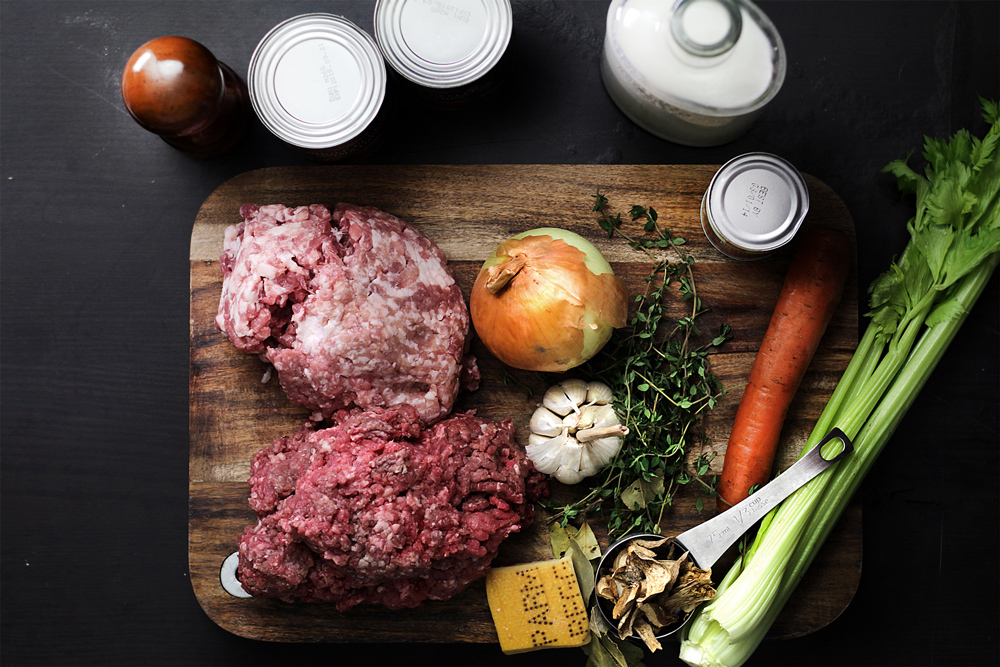 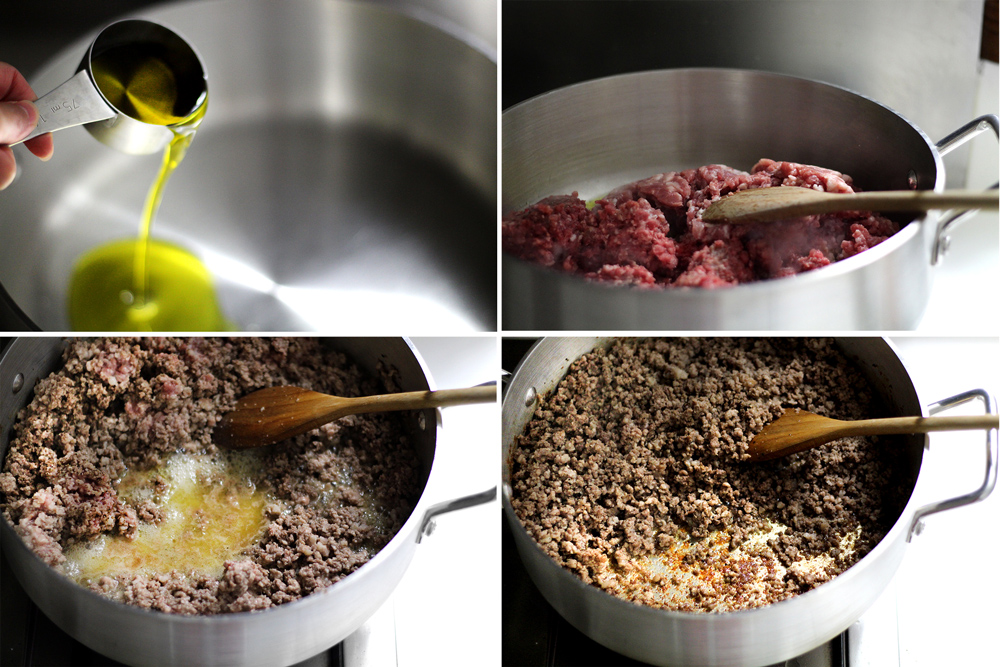 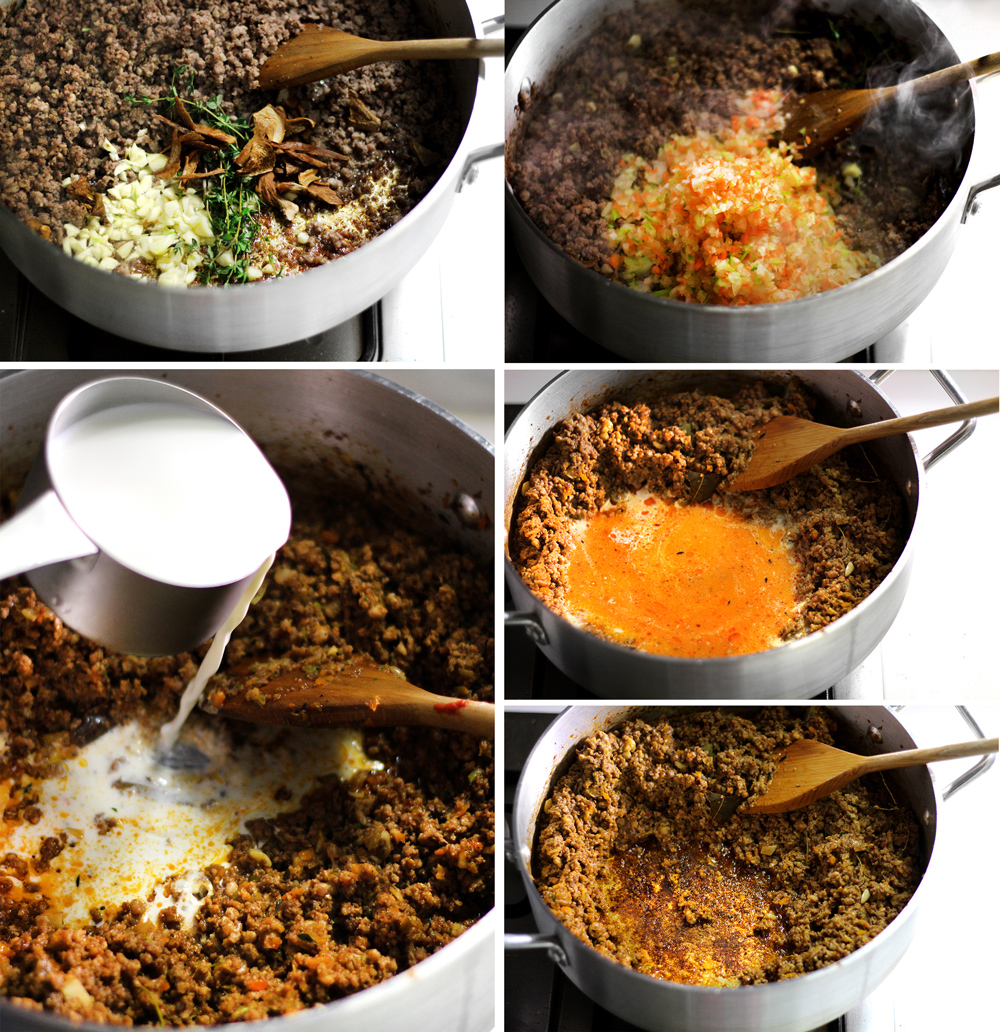 I feel that this has been cruelly unfair to the rag…well, call it Bolognese sauce if you like, I really do.  It is truly special not because of any ingredients out of the ordinary, but because it requires a relentless process of caramelizing as many single molecules in the pot as humanly possible, a repetitive motion between browning and deglazing until ultimately transforming a bunch of mundane ingredients into a pot of deeply rich and in-depth flavored brew.  If you don’t mind me being a little justly dramatic, the dolce le leche in the realm of ragu!  A technique that I for one have never seen it done in any other mainstream cookbooks except maybe practiced in Southern cooking, the kind of idea that should invigorate any committing cooks who share the passion for a pot of magic brown.

So really, an exceptional meat sauce of this magnitude deserves gushing, wide eyes, undivided attention and unconcealed joy, but instead, I had to make it on the most tragic and regrettable night of my life so far, thus contaminating the pure awesomeness of it with memories of blinding sadness.  Can’t gush about it without the urge to drop a Zoloft. 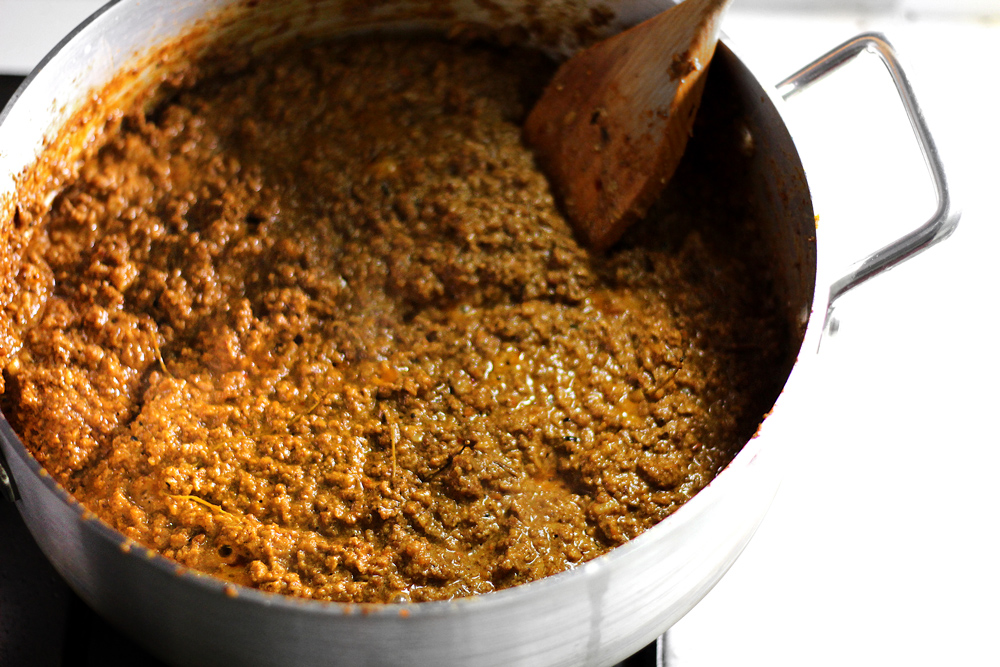 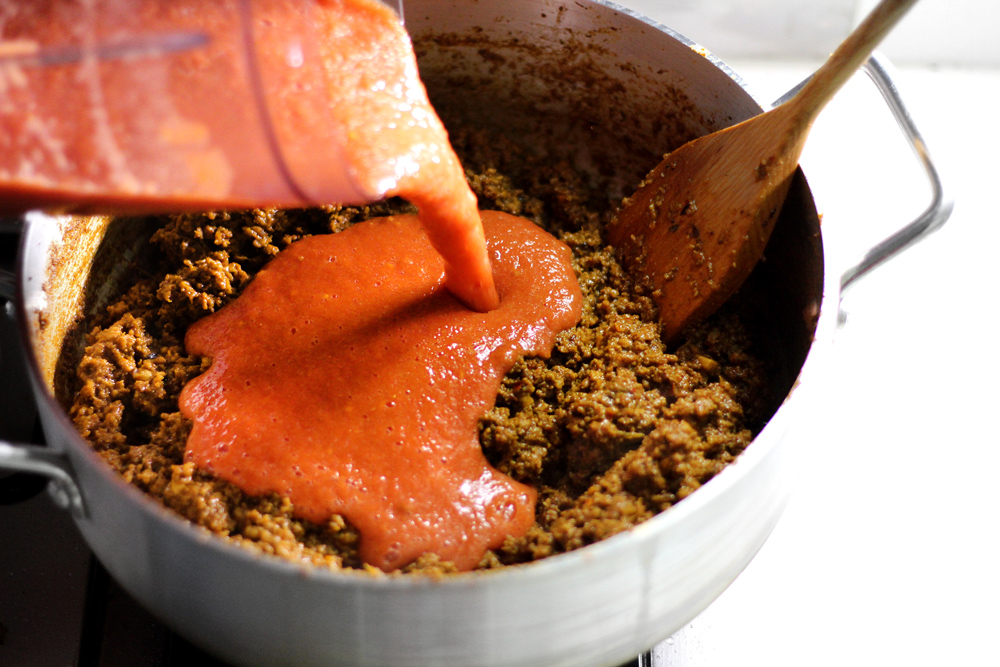 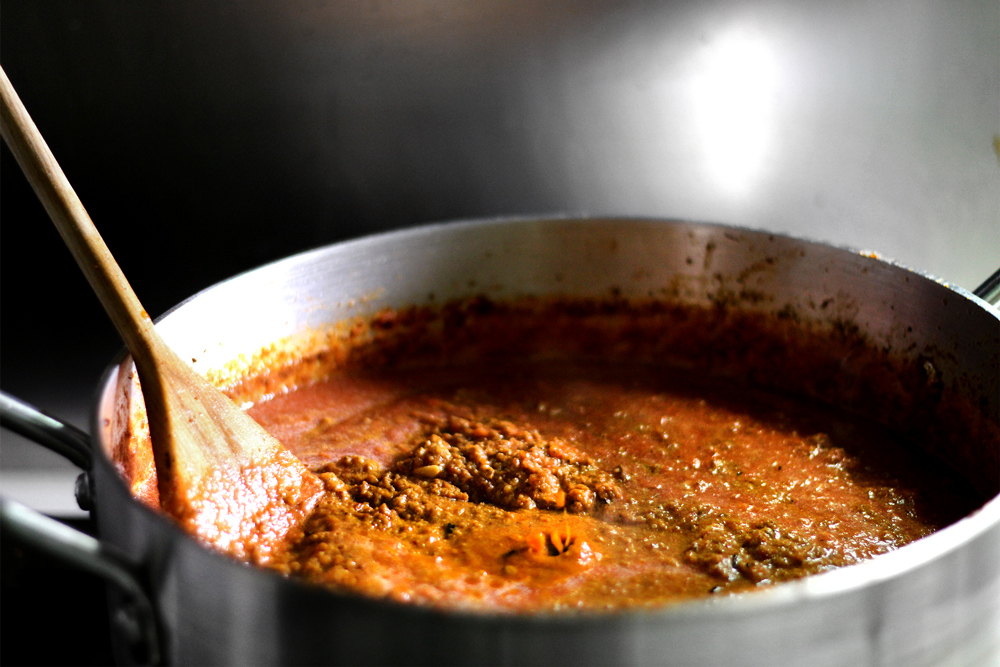 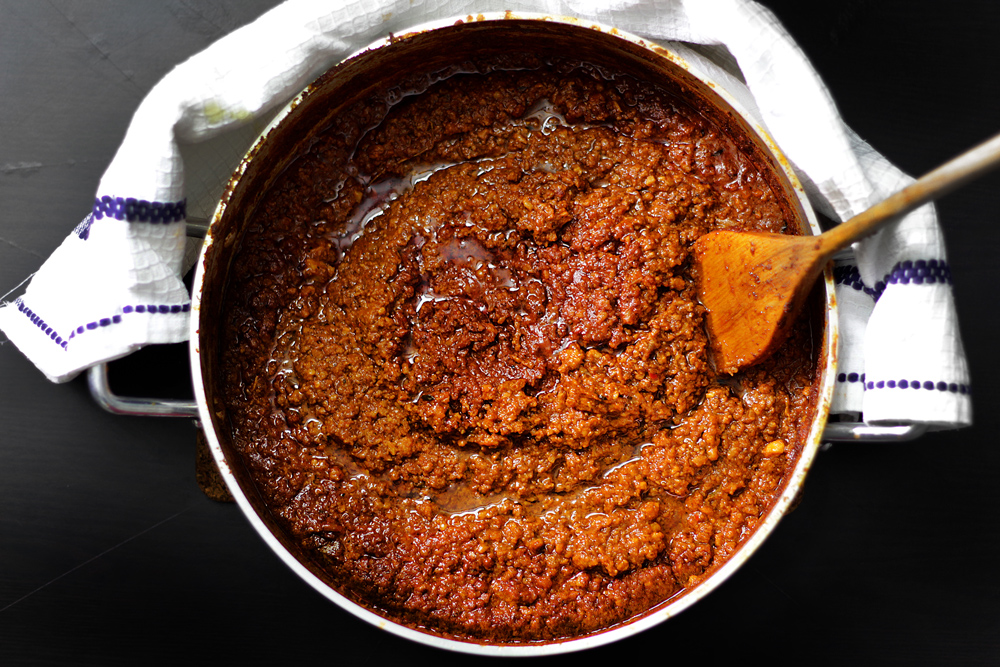 I don’t deserve its greatness, but you are not going to repeat the same mistake.  You are going to pick a day when your whole world seems to be chirping in delights, a day when your contently over-fed Golden Retriever just give birth to a litter of sunshine-colored fur-balls, a day when your dead peach tree resurrects from hell and sprouts unstoppably, a day when your bitchy neighbour moves out and bestfriend moves in, a day when there’s incredible news of world-peace and that the freaking planet is finally cooling down.  Then, and then, you spend the whole afternoon of incandescent joy, standing by the stove and scrape until your arms sore, making and nurturing this pot of ragu with love and anticipation.

Don’t fuck this up.  Because trust me, this ragu deserves to be fondly, fondly remembered. 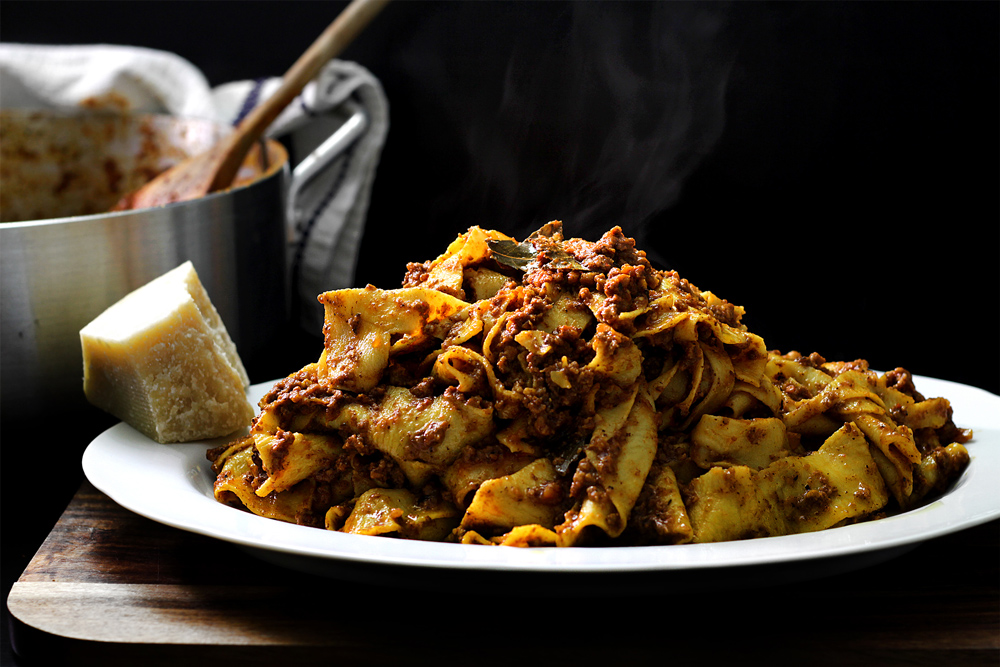 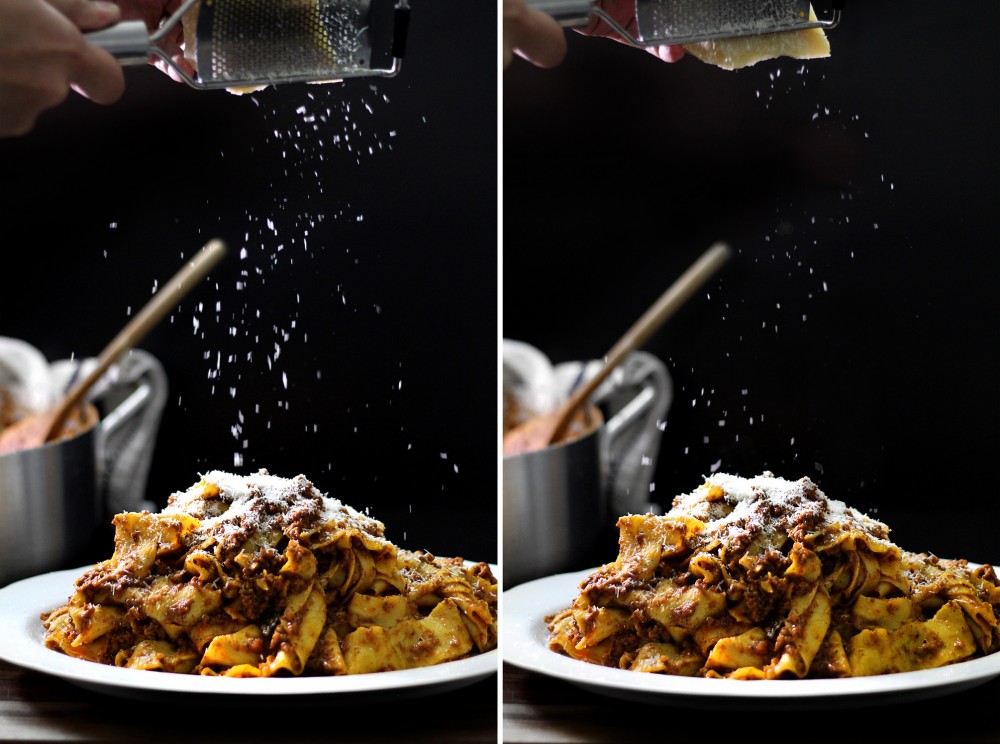 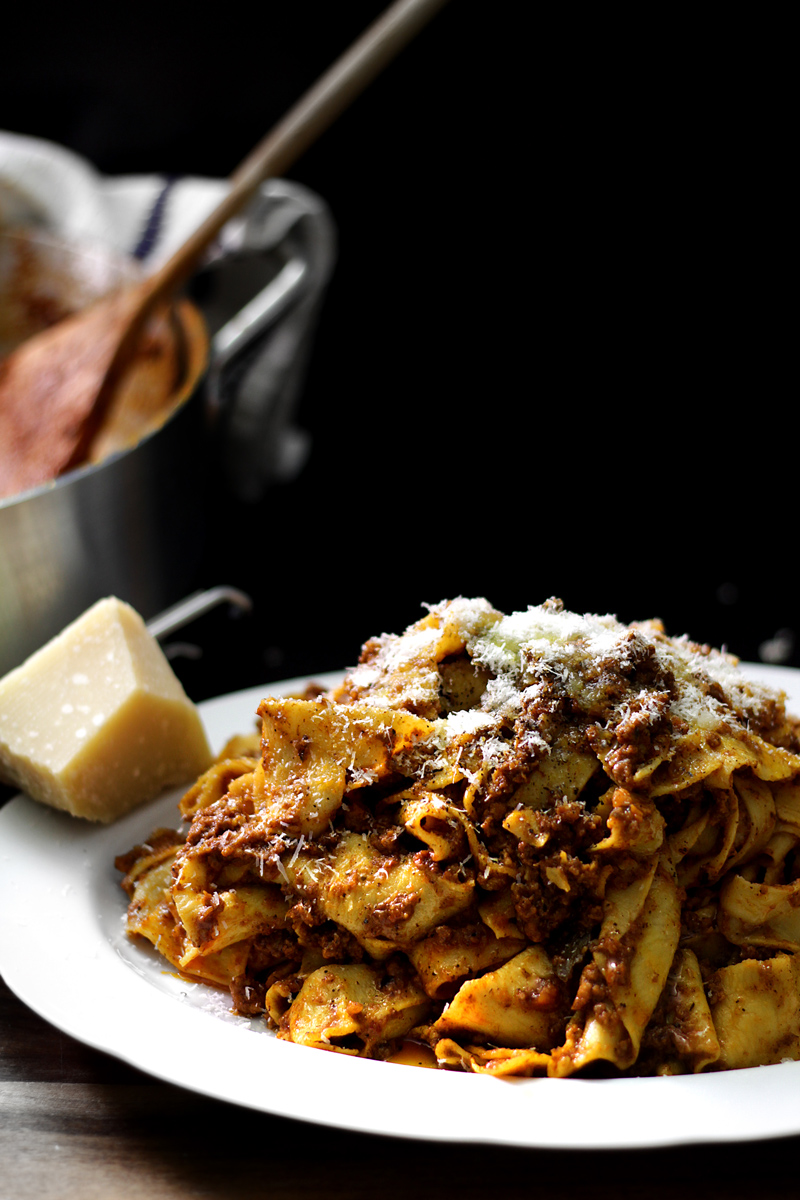 Makes:  enough for more than 10 servings

It’s IMPORTANT to choose the right pot for this dish.  You want something that’s flat-bottomed, and wide (NOT narrow) with enough depth (but NOT deep).  The wide and flat-bottom provides enough surface area for browning, and the relatively shallow depth allow steam to escape without building up on the side of the pot, which is going to drip back into the pot and stop the ingredients from browning properly.

It’s also IMPORTANT to season along every step of the way.  Season the meats while they are cooking, then season AGAIN once the vegetables are added.  Then adjust/season AGAIN once the milk and tomatoes are added.  Every time you add LIQUID to a pot of stew of some sort, always keep in mind that it will COOK DOWN/CONDENSE as water evaporates, so whatever tastes salty now, will tastes saltier once it’s done.

I didn’t use wine (white or red) in this recipe as some traditional ragu might have.  If you want, you can incorporate 1/2 cup of red wine in the beginning of step 2.

Use a flat, wide-bottomed pan to do this.

To prepare the ingredients:  Finely finely mince the celery, onion carrots (smaller than dices), then set aside.  I prefer doing this in a food-processor.  Wash the dried porcini mushrooms to get rid of any sands and impurity, then set aside (no need to soak).  Blend all the canned tomatoes with the juice inside until smoothly pureed, and set aside.

STEP 1 – Browning the meat and vegetables (approx 30 min in total):  Heat up the pan over medium-high heat and add 1/3 cup of extra virgin olive oil.  Add the pancetta and cook until slightly browned, then add the ground pork and ground beef.  Season with 1 tsp of sea salt/grey salt and 1 tsp of freshly ground black pepper.  This is quite a large amount of meat and they WILL NOT brown immediately.  Juice/liquid may ooze out but THAT’S OK, just keep cooking until all the liquid has evaporated, and that there’s a layer of browning at the bottom of the pan, approx 15 min.

Now add the porcini mushrooms. minced garlic, fresh thyme, minced rosemary and chili flakes.  Cook until fragrant.  Add all the minced vegetables (celery, onion, carrot), bay leaves, tomato paste and Parmigiano rind, and season again with 1 tsp of sea salt/grey salt and 1/2 tsp of freshly ground black pepper.  The vegetables will release juice/liquid which is going to “loosen” the browning on the bottom of the pan.  Scrape the brownings with a wooden spatula, then just as what was done before, keep cooking until all the juice/liquid has evaporated and that there’s A BRAND NEW layer of browning forming at the bottom of the pan, approx 15 min.

STEP 2 – Reducing milk and harvesting caramel (approx 1:40 ~ 2 hours in total):  Once all the meats and vegetables have browned properly, add 1 1/2 cup of whole milk (if using red wine, add and reduce it down completely BEFORE adding the milk).  Keep the heat on medium-high, and stir to evenly mix all the ingredients together.  The milk will loosen the brownings and you will scrape it off with your wooden spatula to let it melt and become part of the sauce, then let it cook and the milk will completely evaporate and form ANOTHER NEW LAYER of brownings, approx 20 min.  You see the repetition now, don’t you?  Then you add the next 1 1/2 cup of whole milk and repeat this process.  If your stove tends to heat unevenly, move around the pan to “maximize” the brownings.  Don’t be afraid to let it get deeply rich and dark brown, as long as it DOESN’T BURN/BLACKEN (moving the pan also prevents partial burning due to centralized heat).  You will harvest the caramel (the brownings!) in each of the 5 additions of milk, and by the end of it, you should have a pot of meat sauce that’s rich and brown with intense flavor.

STEP 3 – Adding and reducing the tomatoes (approx 1: 30 hour):  Once the last/5th addition of whole milk has been added, reduced and browned, you can now add all the pureed tomatoes.  Season again with sea salt/grey salt and freshly ground black pepper.  Stir to evenly mix the ingredients and scrape the brownings on the bottom of the pan.  Reduce the heat down to medium-low and partially cover the pan with a lid (tomato sauce SPLATTERS like crazy!).  Let the sauce reduce down by 1/3 to almost 1/2.  Stir occasionally to prevent burning.

To serve:  Cook the pasta (I prefer fresh tagliatelle) according to instructions.  In another pan, add a couple tbsp of freshly grated Parmigiano cheese (for each serving) and little nubs of butter (about 1 tsp for each serving).  Add the cooked pasta to the pan with a generous amount of ragu.  Cook and stir over medium-high heat until everything’s incorporated together. 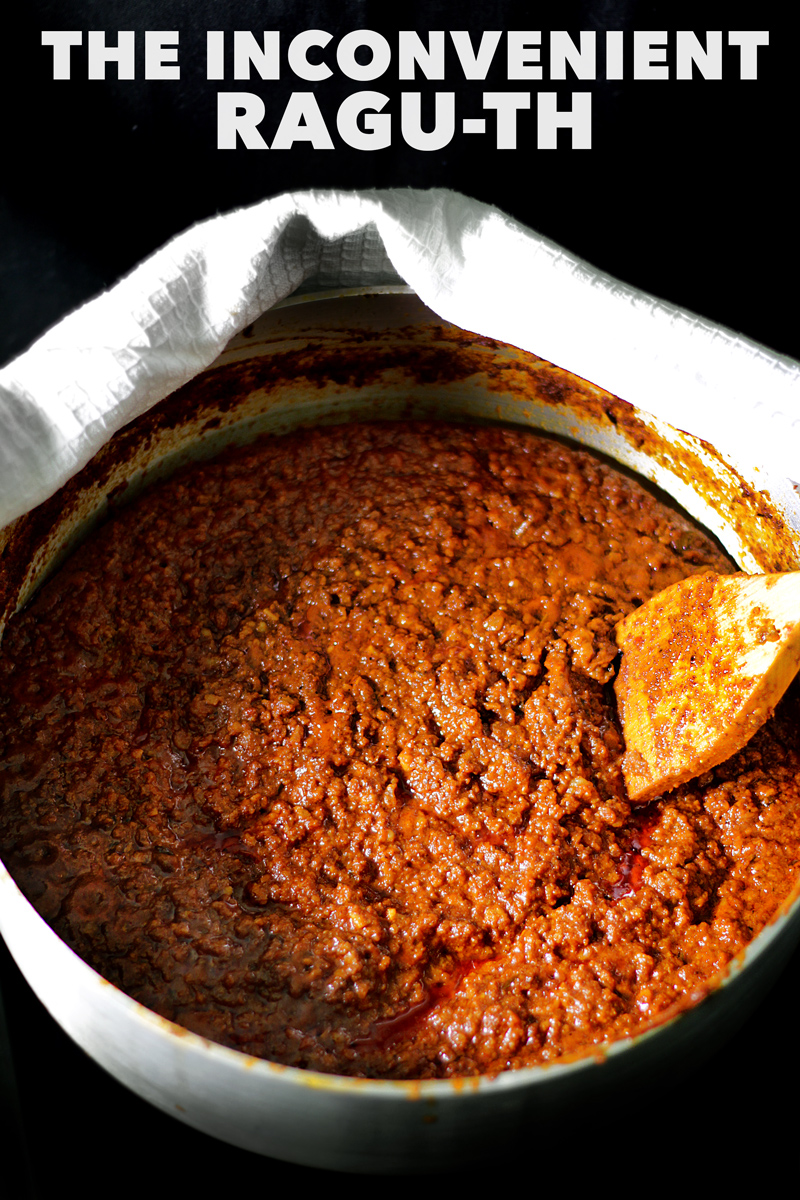