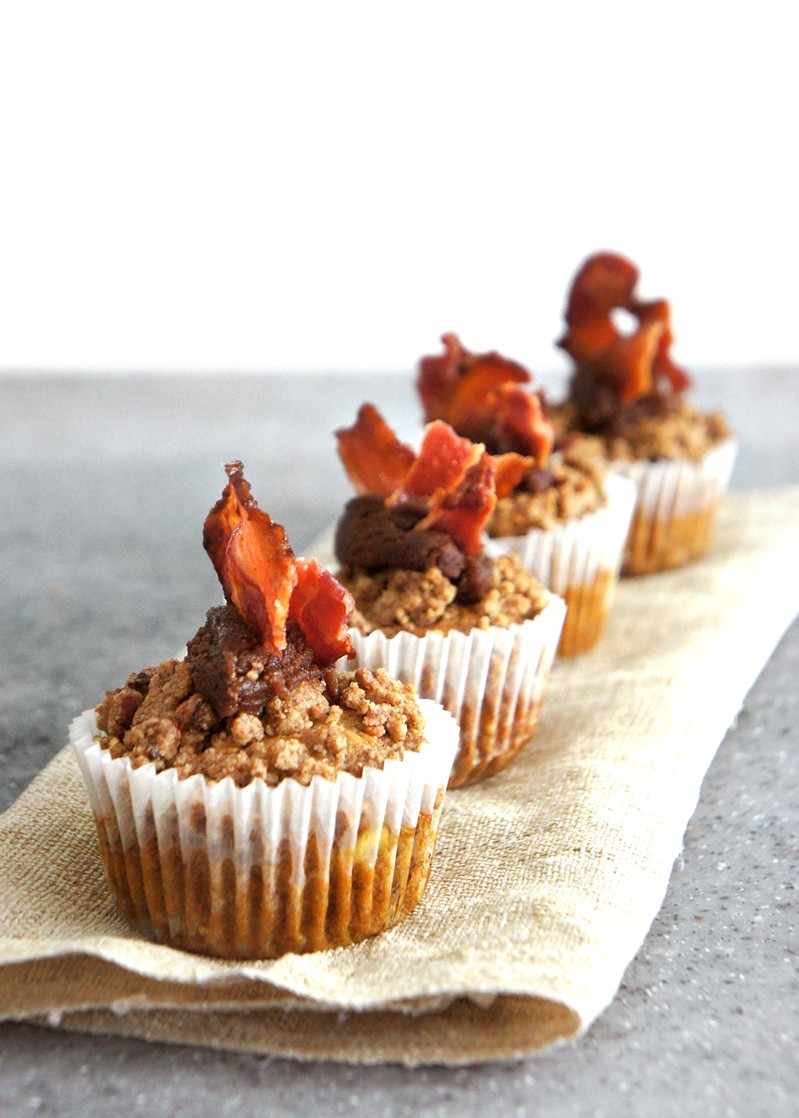 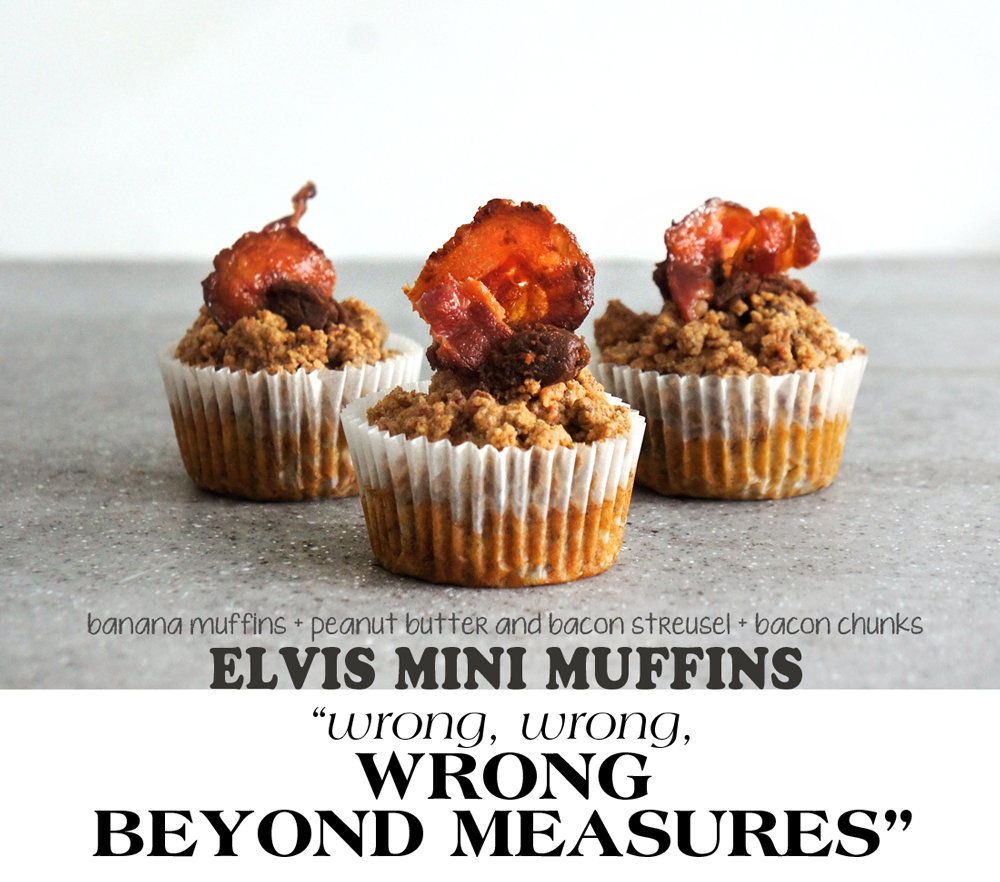 Dear juries if I may, truth is I wasn’t planning on baking something for Valentine’s Day.  Clearly as you can see beyond the deceiving cuteness, these muffins have no place near the category of Romantic V-Day offerings unless the need of a relatively presentable figure wasn’t on the agenda for the end of the night…   In fact, it was nowhere on my mind when I was scheming on a compact delivery system for a sandwich come to be known as – the Elvis, a criminal creation of peanut butter, banana and bacon in between two slabs of toast.  But it turns out, there is something sweet to come to my defense. 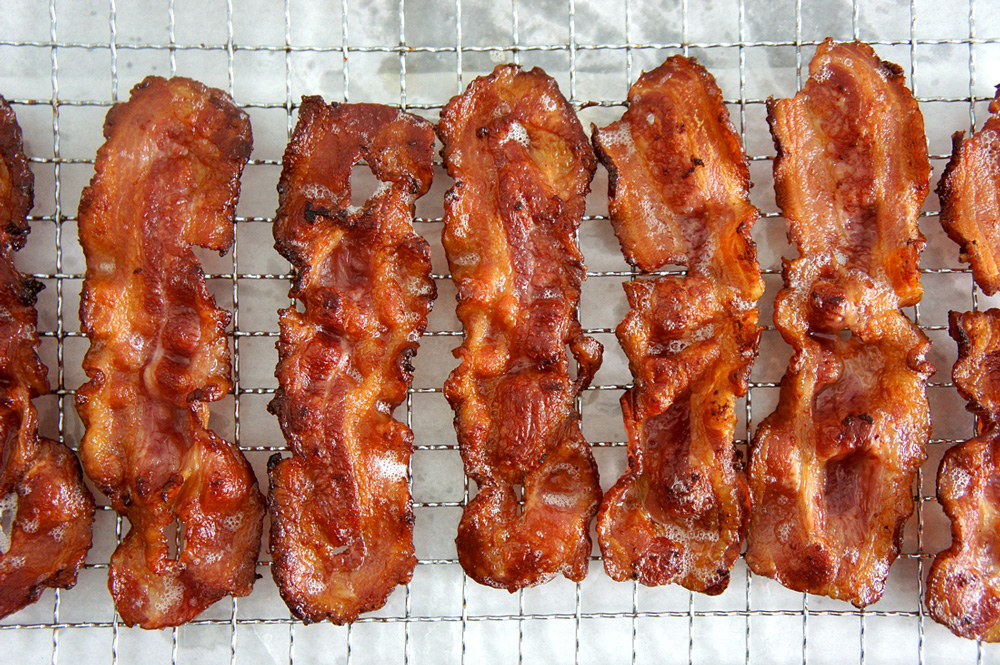 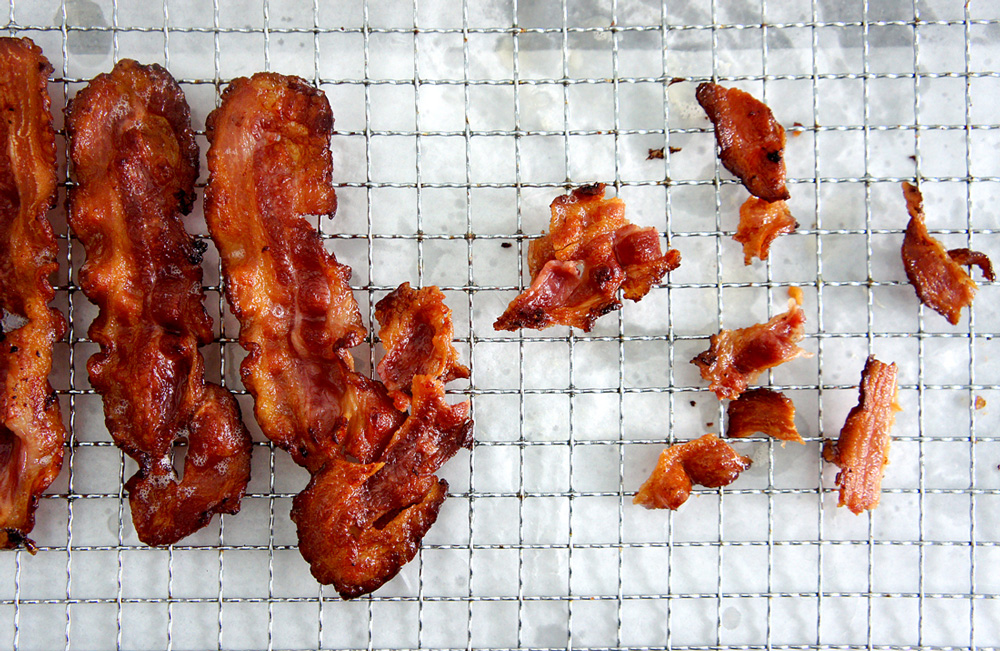 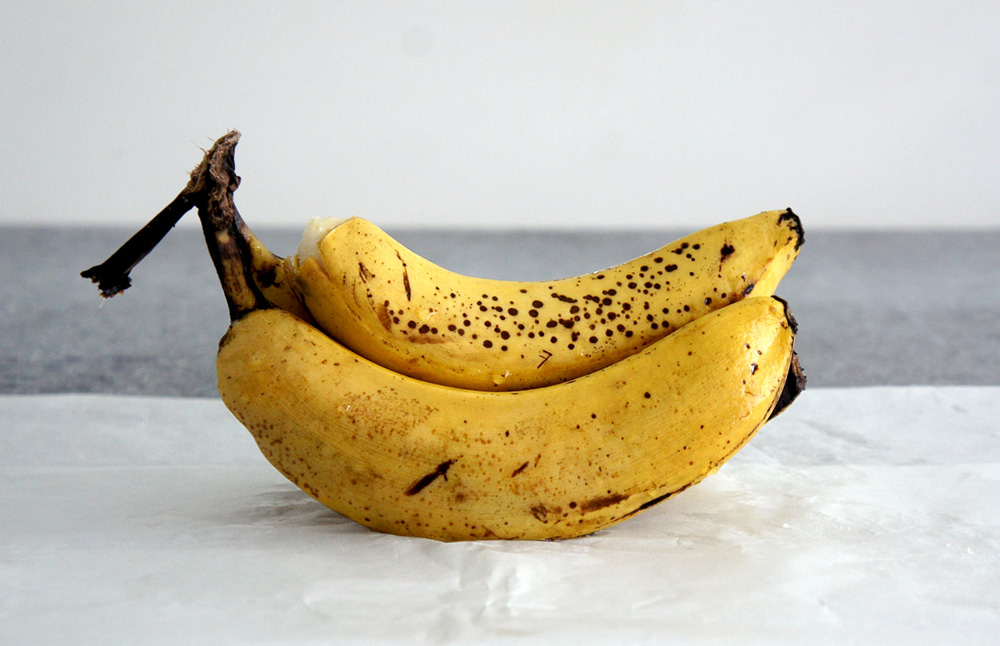 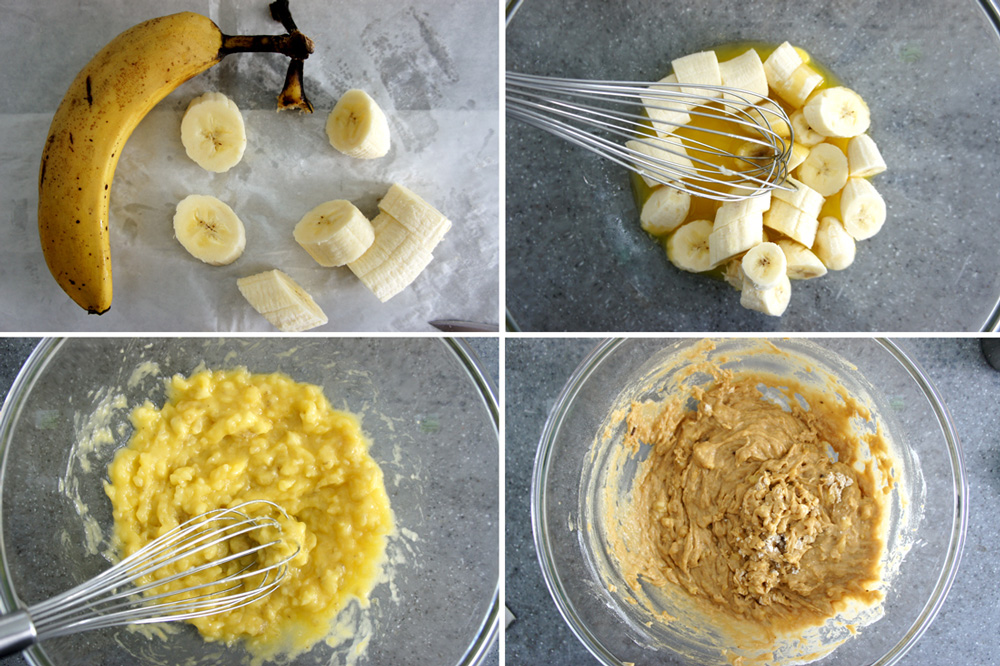 In March 2002, my first encounter with Elvis happened on one of the first three dates with then-not-even-my-“boyfriend”-yet Jason.  Back in the early phase in every relationship when impressions were still being made, when the males still hold their farts and the females still shave their legs.  The innocent sweet old days… may it long live in my memories…  Anyways, so he took this new girl in town from Vancouver on a tour around his base-camp, the NYU bureau, and introduced me to a little sandwich shop called the Peanut Butter Co.  I don’t recall ordering anything there because like I said, impressions… slim waistline was still mandatory, but I guess something on its menu left a hefty imprint on my mind and it was the Elvis.  And I plead for your trust when I say that I remember justly thinking: “now that’s absurd”. 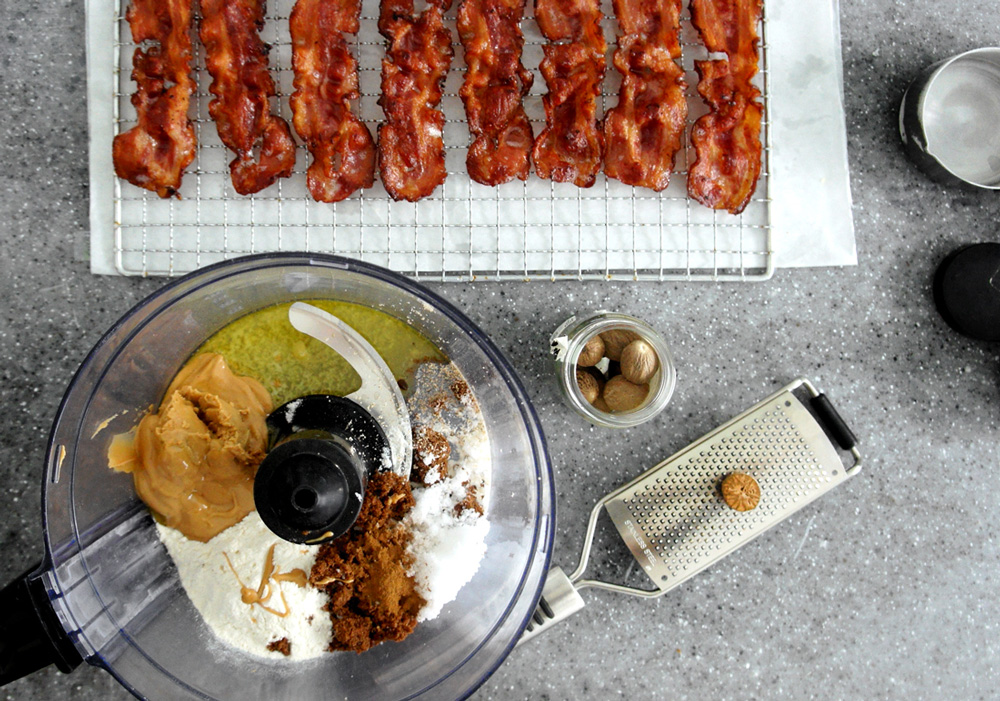 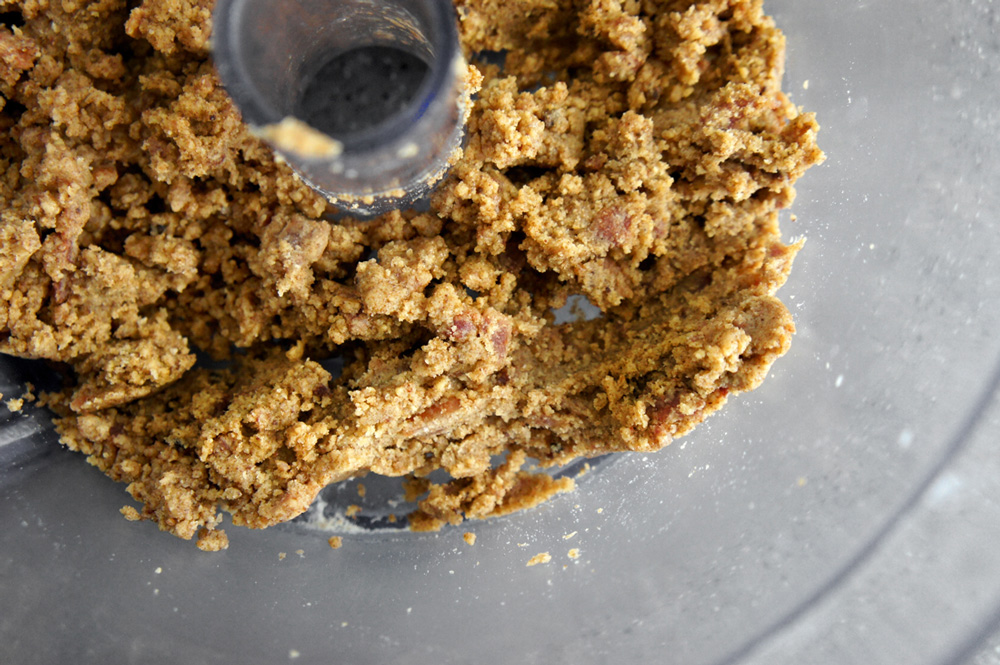 For the record, I have not thought of the Elvis ever since or in any way on how to transform it into something even MORE absurd.  Really.  I swear for the past 10 years the idea of a banana and rum muffin topped with streusel made with bacon bits, peanut butter and bacon dripping, then decorated with more chunks of bacon pieces adhered by peanut butter and chocolate ganache has never, I SAY NEVER crossed my mind.  I swear.  Don’t you think I know that this is wrong, wrong, WRONG beyond measures?!  No one told that to my prosecutor when they took me away for endangering public health.  But I think something mysterious was at work when the V-day was closing in this year, the year that marks the first decade of the many that Jason and I are going to share, the little Elvis that we were sharing a laugh over 10 years ago kept popping out in my train of thoughts.  Call me sentimental, but if this was criminal, it could only be judged as a crime of passion. 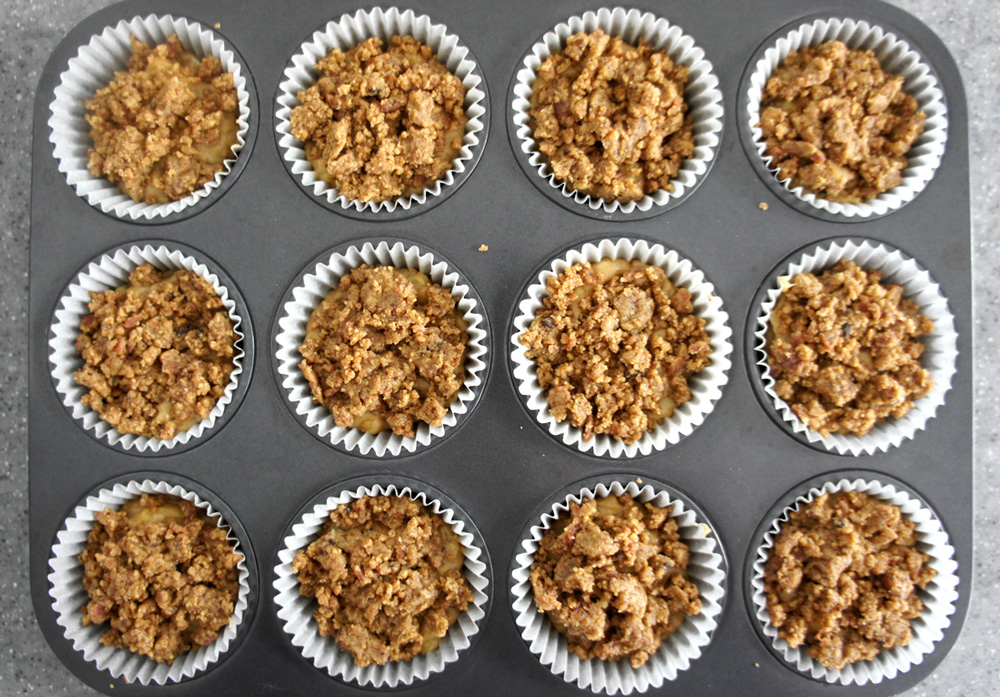 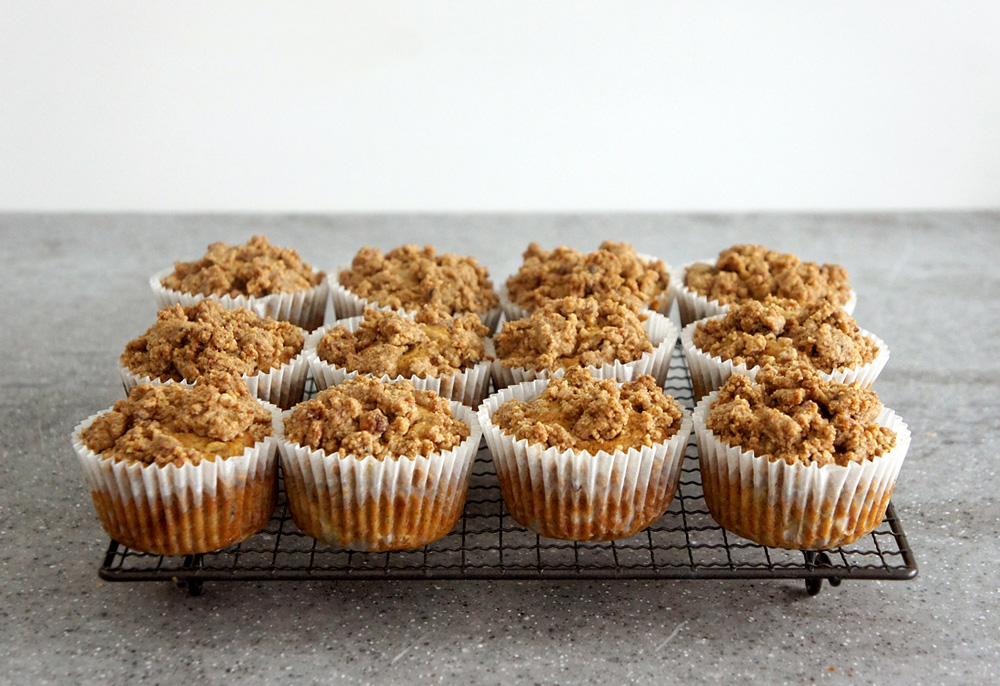 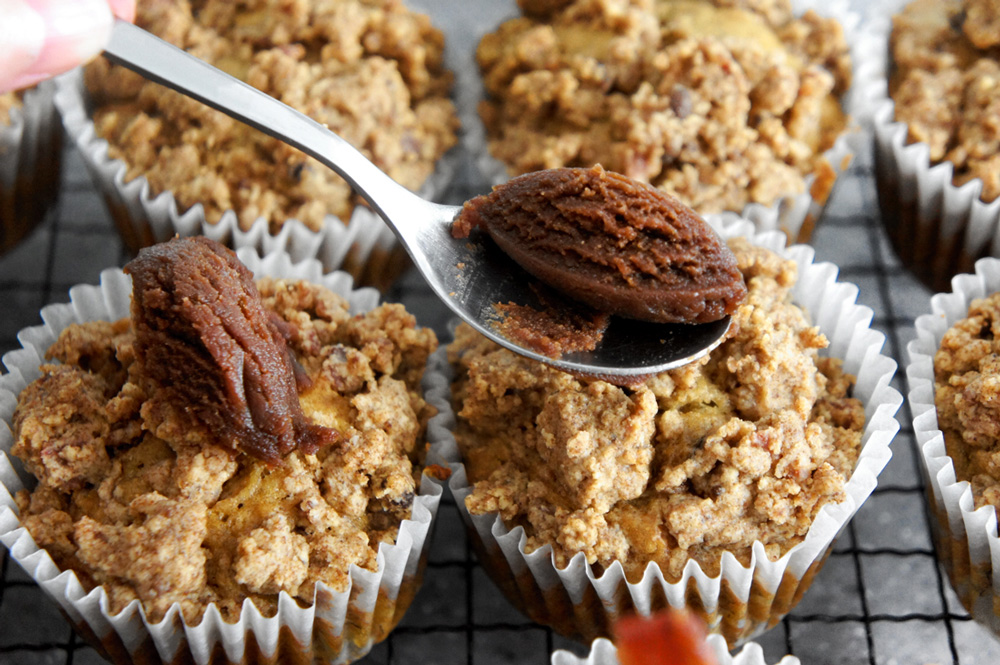 So dear juries, when you carry out my sentence please keep in mind that this is only a temporarily-insane mind that was troubled by the remnant of memory left from a happy place now she could no longer go back to (as in the “farting” and the “shaving” and… you get my point).  AND if it’s any consolation on the potential outcry and a few popped-open buttons my reckless behavior may have caused, based on the evidence my defense lawyer has gathered from a reliable source, bacon drippings (well… lard) in fact has a higher ratio of unsaturated fat than say… butter (which is what is replaced in the streusel, you see).  Therefore one can almost conclude that this is, even though a muffin made with butter, but with an ACTUALLY healthier streusel-topping that’s made with lard…..

OK… just take me away. 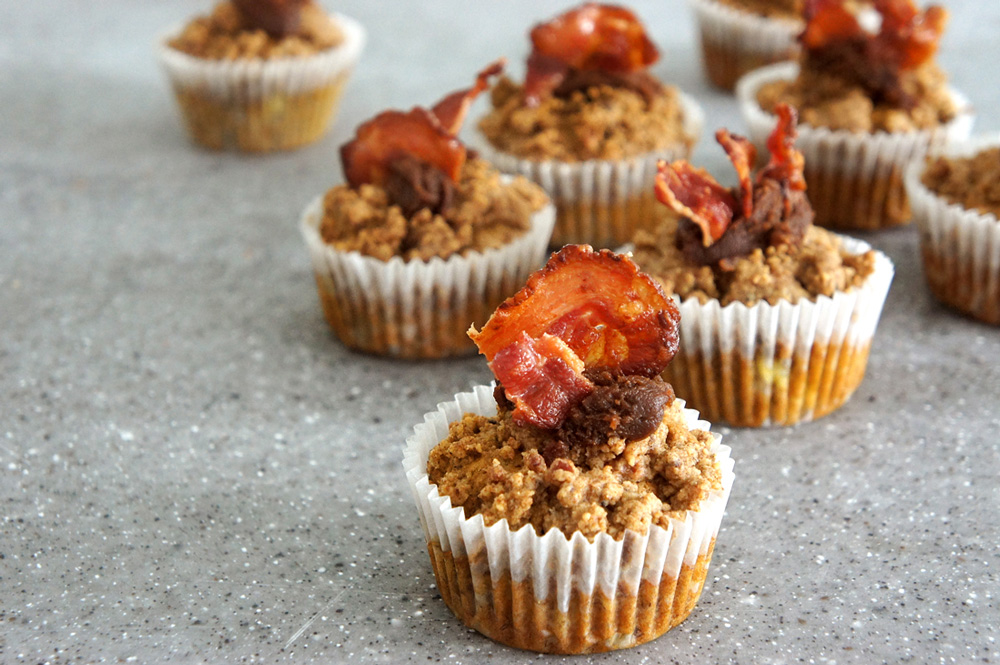 *  The key to really good banana muffins, or banana breads or… banana anything is ripen/on-the-way-to-COMPLETELY-browned/KING-of-the-freckles/fruit-flies’-wet-dream/and-I-mean-REALLY-REALLLY-RIPEN bananas.  The kind that you could smell from 5 feet away and doubt if it’s still edible.  Right.  Those bananas.

**  I only realized that I forgot to include the “1 large egg” into the batter after it was too late.  The muffins still turned out to be moist and delicious without that 1 egg but I suspect that they lost a bit of “volume” as whipped eggs usually help the batter puff up more during baking.  So by complete accident, I can now suggest that if you were also egg-intolerant like me, you could leave out the egg and still have a respectable product at the end.  But for the rest of you normal folks, don’t forget the egg.

Make the muffin batter:  Melt the unsalted butter in a large bowl in the microwave.  Peel the bananas and mash them into the butter using a whisk.  Add the sugar,  brown sugar, egg, dark rum and vanilla extract.  Whisk until smoothly combined and slightly foamy.  Sprinkle the baking soda and salt over the mixture and whisk, then add the flour and fold it into the wet ingredient until JUST combined.  Set aside.

Make the streusel:  In a food processor, combine all the ingredients under “peanut butter and bacon streusel”.  Pulse until the mixture comes together as loose crumbs.

Bake the muffins:  Equally divide the muffin batter into 12 medium-size muffin cups set inside muffin tins.  It should fill each cups up to half-way full.  Then evenly distribute the streusel over the batter and press it lightly into the batter with the back of a spoon (I think this makes them stick better to the muffins).  Bake in the oven for 25~30 min, or until a wooden skewer comes out clean of the center.

Meanwhile make the topping:  Combine peanut butter, semi-sweet chocolate chips, milk and unsalted butter in a bowl.  Microwave on high for 20 seconds and stir the mixture until melted and evenly combined.   You can JUST USE peanut butter for the topping instead of a peanut butter AND chocolate ganache.  Its purpose is really just to hold the bacon chunks on top of the muffin.

Assemble:  Let the muffins cool on a cooling rack for 20 min.  Spoon a small amount of the peanut butter/chocolate ganache (or just peanut butter) on each muffins.  Then insert 2~3 pieces of bacon chunks on top of the ganache. 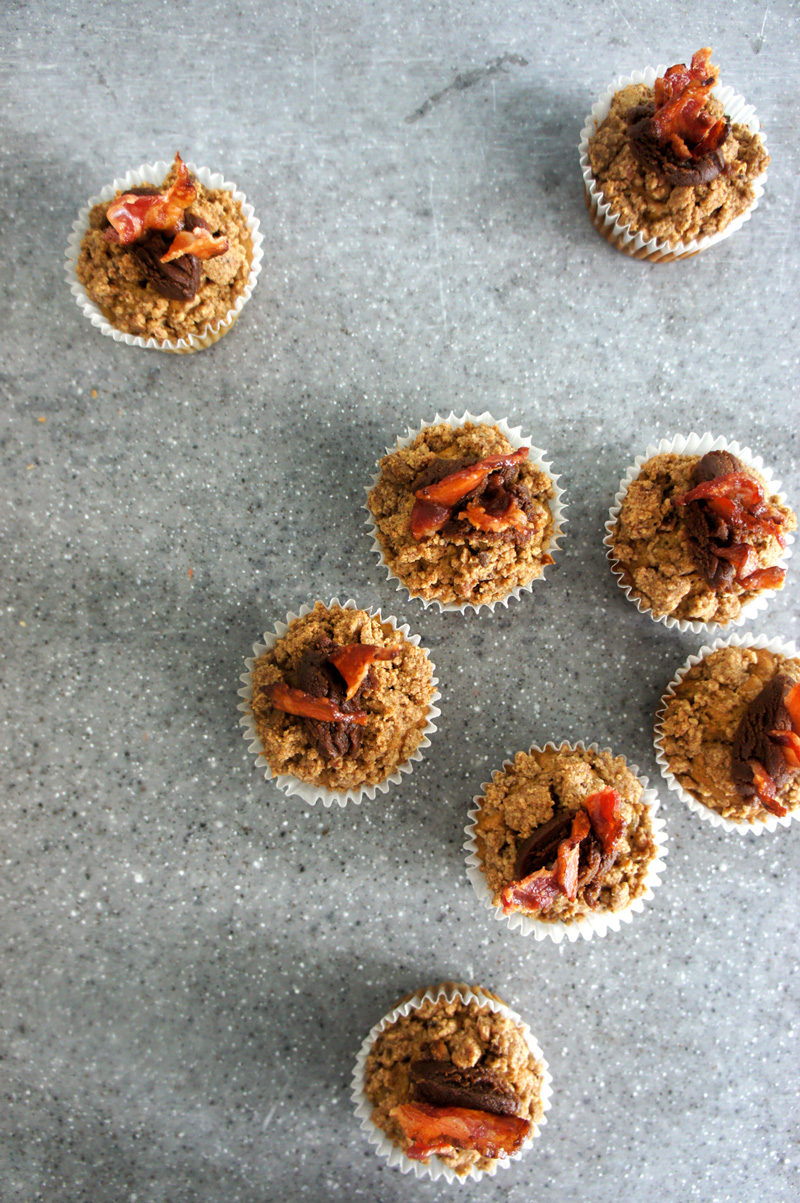