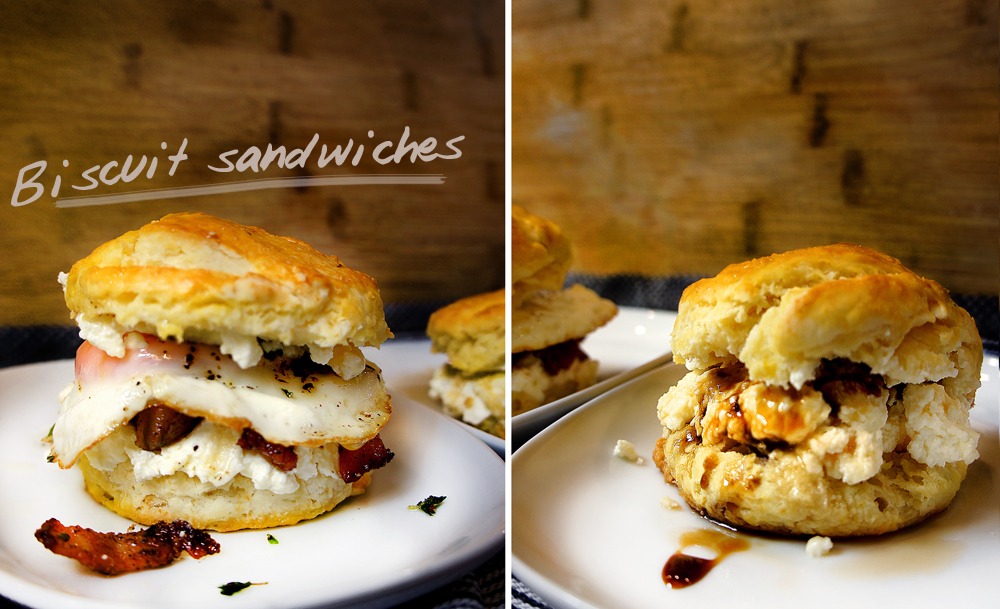 Cuz I don’t brown up nice in the oven.  NO!  I meant I can’t bake!  I’m paralyzed in the field of baking because I’m innately handicapped in following instructions.  But I, too am a mere mortal who’s powerless against the calling of fresh-out-of-the-oven pastries.  And I have a thing for biscuits.

For one, it is one of the few pastries that doesn’t need egg (ok, I LOVE eggs but can’t have them.  That’s a Ginormica sob story for another time).  And plus, they’re just endlessly versatile.  They are the personal escorts,  the Emporors Club of the pastry world.  They will play any role you want them to play for the day, breakfast, lunch, dinner or dessert!  Fantastic!  If one could just be a gentleman, invest in a little courtship beforehand to get to know the biscuits well, to help her reach you-know-what.   What?

Make the biscuit happy, and she will return the favor.  And all that biscuit ever wanted, is to rise.  Since the birth of biscuits, how many of us amateur bakers’ tears were shed over the walking-dead who didn’t…, “hello? are you still there? ….”  But all the sweat and tears would be washed away at that final, triumphal moment when the biscuits come alive, and rise to glorious heights in the blistering heat of the oven.  And we could be finally be assured that  they are blissfully happy, flaky, fluffy and layer-y inside, a perfect delivery system with endless possibilities.

So what’s the secret in the rising of the biscuits, one asks? 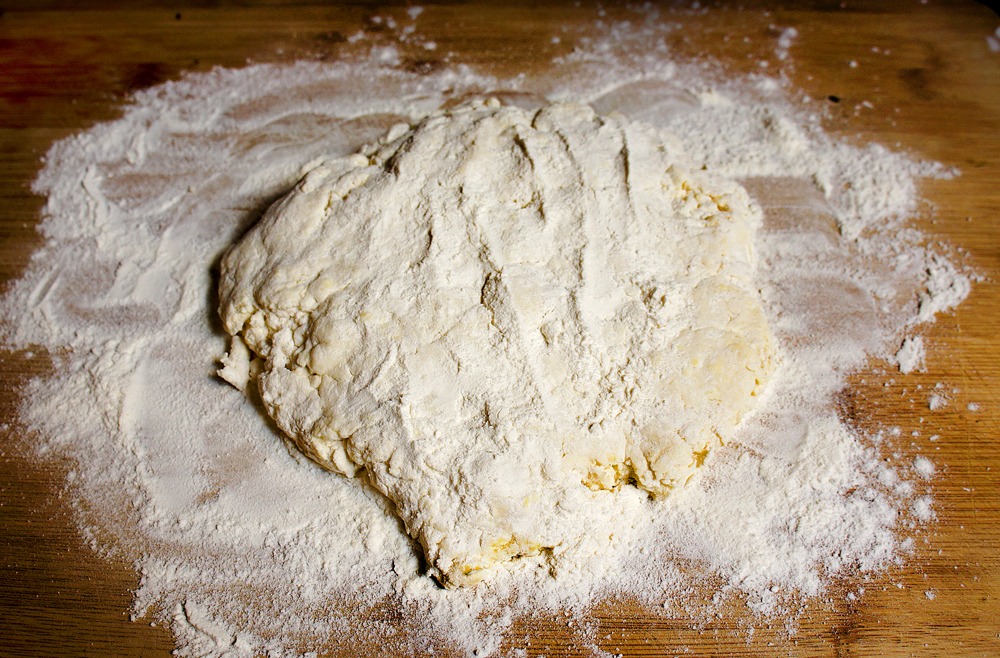 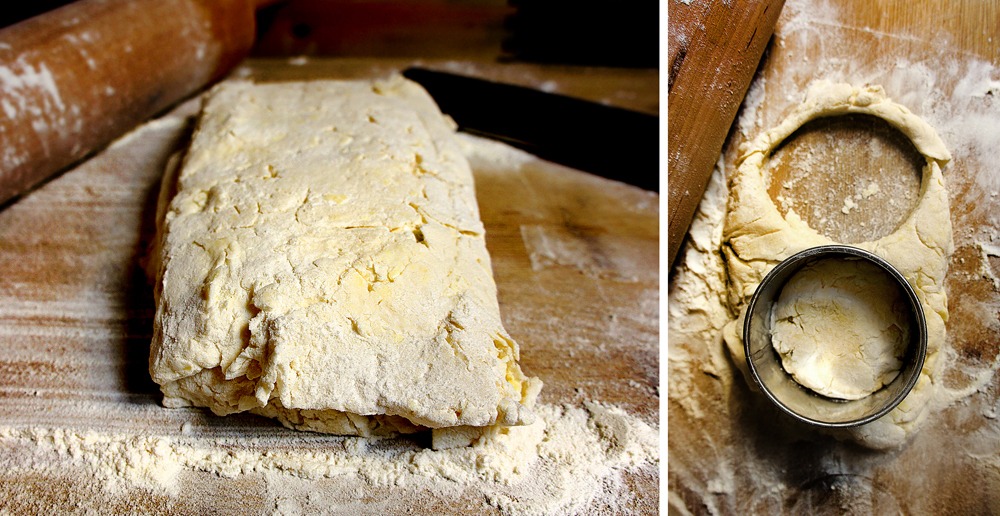 *SCIENCE: cold butter holds air well.*  The air released when the butter melts in the oven pushes the dough up and gives it the rise.  So…  Crank up the AC.  Freeze the butter.  Freeze the flour.  Freeze the processor and the blade.  Freeze the board and the rolling pin.  God know, take a cold shower if it’ll help.  The key is that everything MUST be cold.  During the entire process, starting from the cutting of the butter, to the moment before the biscuits go into the oven, all components, hardware or software, must be kept icy cold!  If at any moment, the dough feels slightly warm, even if it could be just a figment of imagination, put the dough back into the freezer and let it re-freeze.  In fact, in the time I lost for taking pictures, I have probably lost 5 mm of the rise.  And that’s FIVE, very devastating, 1 mm.  I may sound a little psycho right now, but every biscuit making experience of mine has been an epic struggle over the “rise”…….. 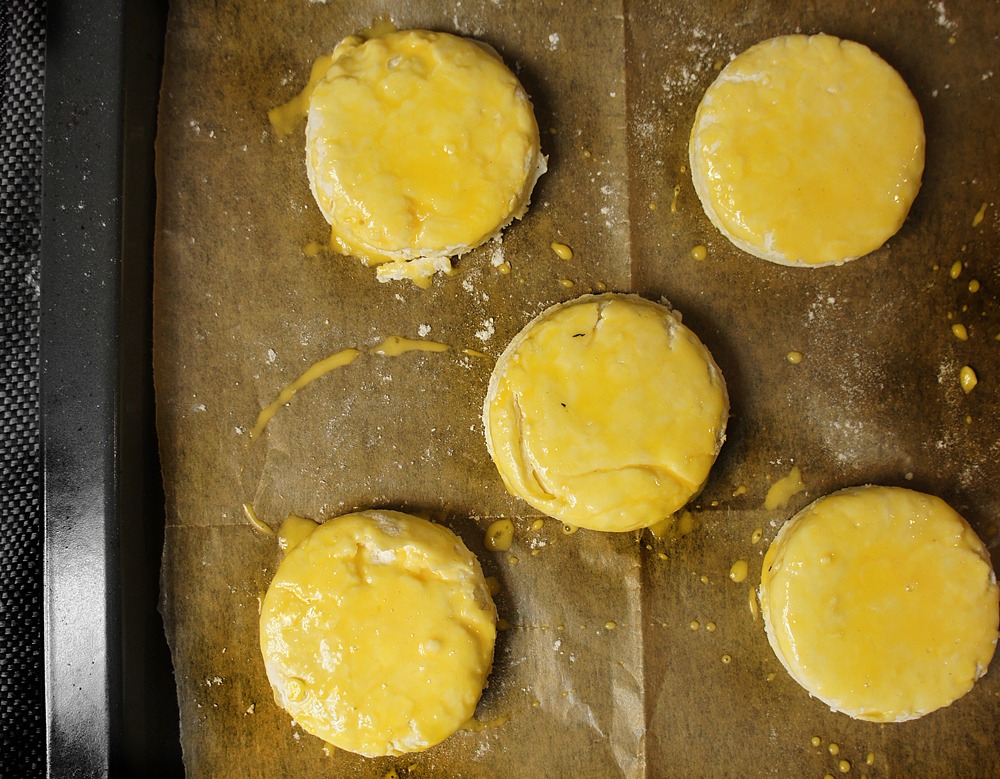 Ok, got it.  Temperature is crucial.  But the shape of the butter bits is important, too.  Recipes usually tell me “pea size” bits of butter is my answer, but I know something better.  Ideally the ice cold butter should be “shaved” with an attachment that comes with the food processor, so they each results in a thin, wafer like shape that will layer nicely within the dough and give out steam that makes the puff.  Yeah, like a puff pastry.  But sadly, my made-in-China processor makes the most devastating noise when I force this task upon it.  *RULES: Chinese appliances should be used as the employee you hired who’s dad is your client.  It’s a delicate relationshiop that mustn’t be tested, or he’ll quit, and you’d be sorry.*

So I left mine alone, and just used the good old blade.

A friendly reminder for those like me, guilty as charged but also just a victim in this preservative-infested world,  who somehow have forgotten the existence of expiration dates.  What?  Chips Ahoy don’t last forever?  NO.  They don’t.  How long has that box of baking powder been sitting in the dark corner of the pantry, slouching, withering beneath the corpses of forsaken bottles and cans?  Don’t remember?  Me, too.  Make sure the baking powder is still potent!  Like a young, eight-packed Spartan at his prime!  Ok. 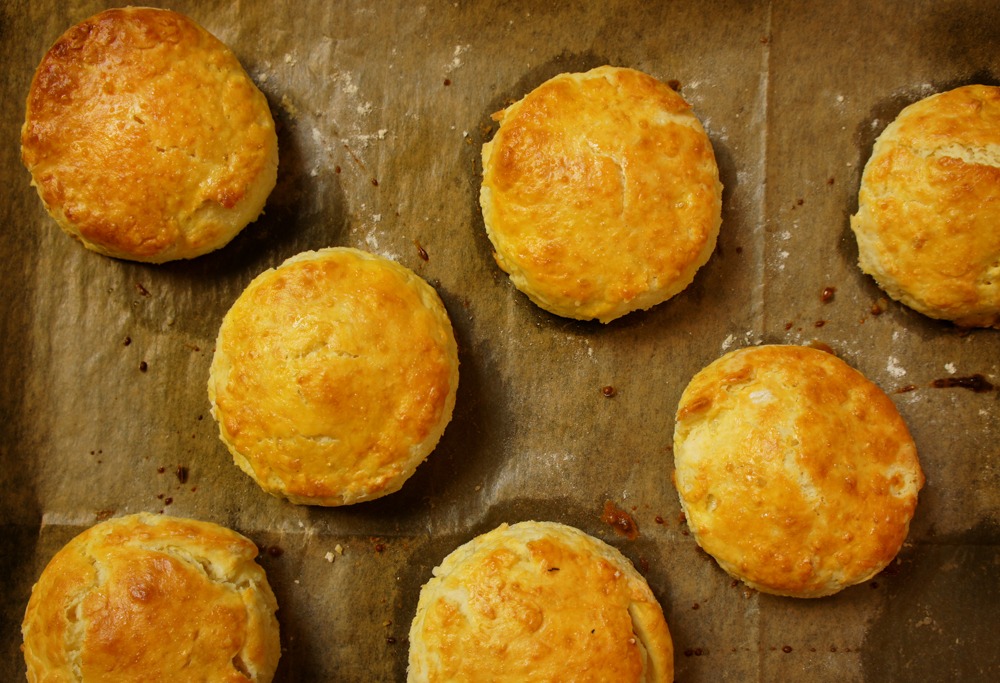 Of course from this point on, the choices are endless.  Buttermilk, or cream, or yogurt?  Cheese, or dried cranberries?  Fresh herbs, or chocolate chips?  Fried chicken, or ice cream?  Gravy, or maple syrup?  Its potential is only limited by my imaginations.  But I’m gonna work on my craft first, and start with two, basic butter biscuit sandwiches. 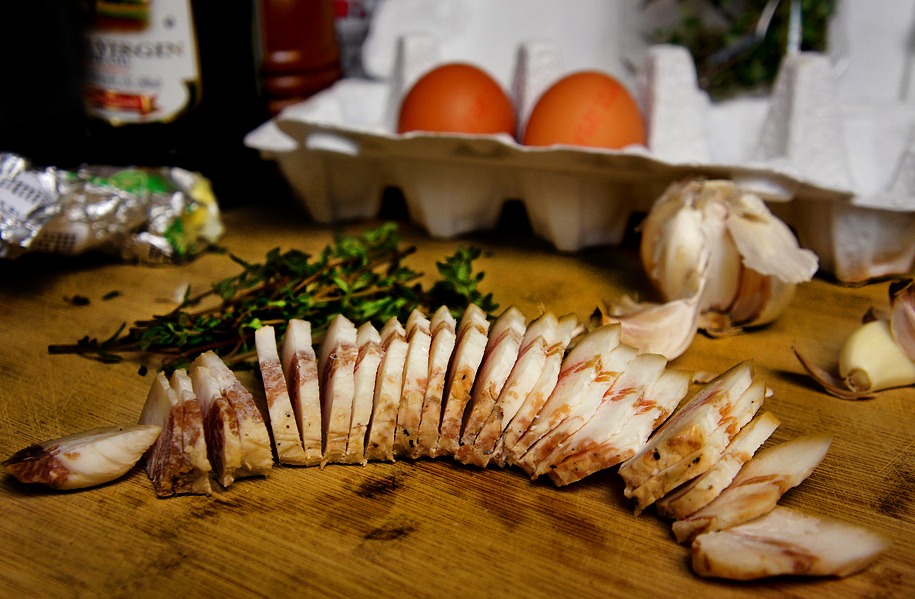 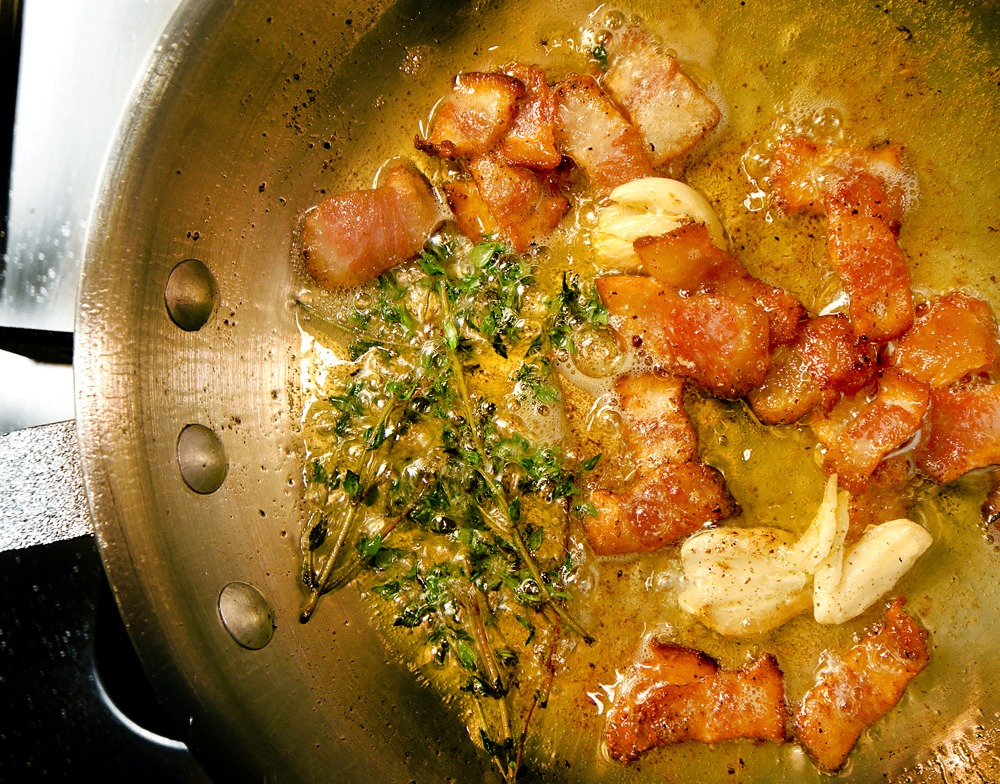 Combine the flour, baking powder, baking soda and salt and sift them into a big bowl.  Weight the butter and cut it into cubes first, and space out evenly on a small plate.  Then put all of the above into the freezer, and let chill for 1 hour AT LEAST, to 2 hour.  The butter should be cut before freezing because it will be too hard later for this task.  Also it’ll freeze faster.  While the ingredients chill, I’m gonna take the time to render my smoked jowl.  Cut the jowl or bacon into pieces and let them render in a little olive oil on medium heat.  Throw in a smashed garlic clove and crack some pepper, too.  Let everything toast in the oil until the jowl/bacon bits are crispy.  At the last minute, put the sprigs of thyme into the oil.  Now this is gonna pop.  Yes, they will pop like popcorns and there will be hot oil blazing in all directions.  It’s allowed to scream a little.  Nobody will judge.  A tong and a mitt are real handy in moments like this.  The thyme will get crispy, too in a few seconds.  Transfer everything with a slotted spoon onto a plate and reserve the oil.

Preheat the oven at 450 F, 230 C.  So after waiting patiently for 1 hour or more, the ingredients of the dough should be quite chilled.  The cubes of butter should be rock hard.  If not, leave then in the freezer for another 30 min.  Set up the food processor with the blade (of course if the food processor is a professional grade, bringon the grater attachment instead).  Carefully move the flour into the processor’s bowl.  If I just dump it in like an idiot, the flour will puff up into the air and disperse like fairy dusts.  Put in the ice cold butter, too and start “pulsing” the mixture until the butter is chopped into little bits, a little smaller than peas ok.

Now move fast.  Transfer the mixture back into the COLD bowl where it came from.  Pour in a cup of milk RIGHT OUT OF the fridge.  Carefully fold the flour mixture into the milk until relatively combined.  DON’T overwork it.  Dust the board and move the dough onto the board.  The dough will be wet and sticky, so dust it with more flour and lightly pet it into a rectangular shape.  With lightening speed but feathery touch, roll the dough out into 1/2 inch, 1.5cm rectangular sheet, cut it into 4 equal parts in length, and stack them on top of each other, then roll it out again into a 1 inch thick sheet.  What it creates is layers in between the biscuits, which is what a respectable biscuit ought to have.

With a circle pastry cutter, cut as many biscuits out of the dough as you can.  Lightly pack and reform the leftover dough, and again, cut as many as you can.  Then throw away the rest of the dough.  The first cuts, the “extra virgin” of the batch , are going to be the prettiest ones.  The seconds from the leftover, re-formed dough won’t produce biscuits nearly as nice looking.  But then again, nothing will highlight the beauty of a girl better than an ugly sister.  Throw away the rest because if I try to squeeze an extra biscuit out of this, it will look tragic among its siblings, and it will hate me for bringing it into the world.  Space the biscuits evenly on a baking sheet , 2 inches, 5cm away from each other, brush egg wash on the top surface of the biscuits (gives them a nice sheen), and slide them into the HOT, preheated oven on the middle rack.

Now, pray.  Hovering in front of the oven door, staring on my biscuits with desperately hopeful gaze, and praying that if they rise nicely today, I would walk my dogs the next weekend.

Split the biscuit, and smear fresh whole milk ricotta on both sides.  To make the the savory sandwich, place some jowl/bacon on the ricotta, fry an egg in the oil from the jowl/bacon, and top it onto the sandwich.  Drizzle a little bit of the thyme/garlic infused pork fat on top of the egg just to overkill it.  To enjoy the sweet sandwich, just pour maple syrup or black sugar syrup on the ricotta.  My favorite is to eat it with rocotta, crispy jowl/bacon WITH maple syrup.  Sugar is bacon’s bestfriend.  They belong together. 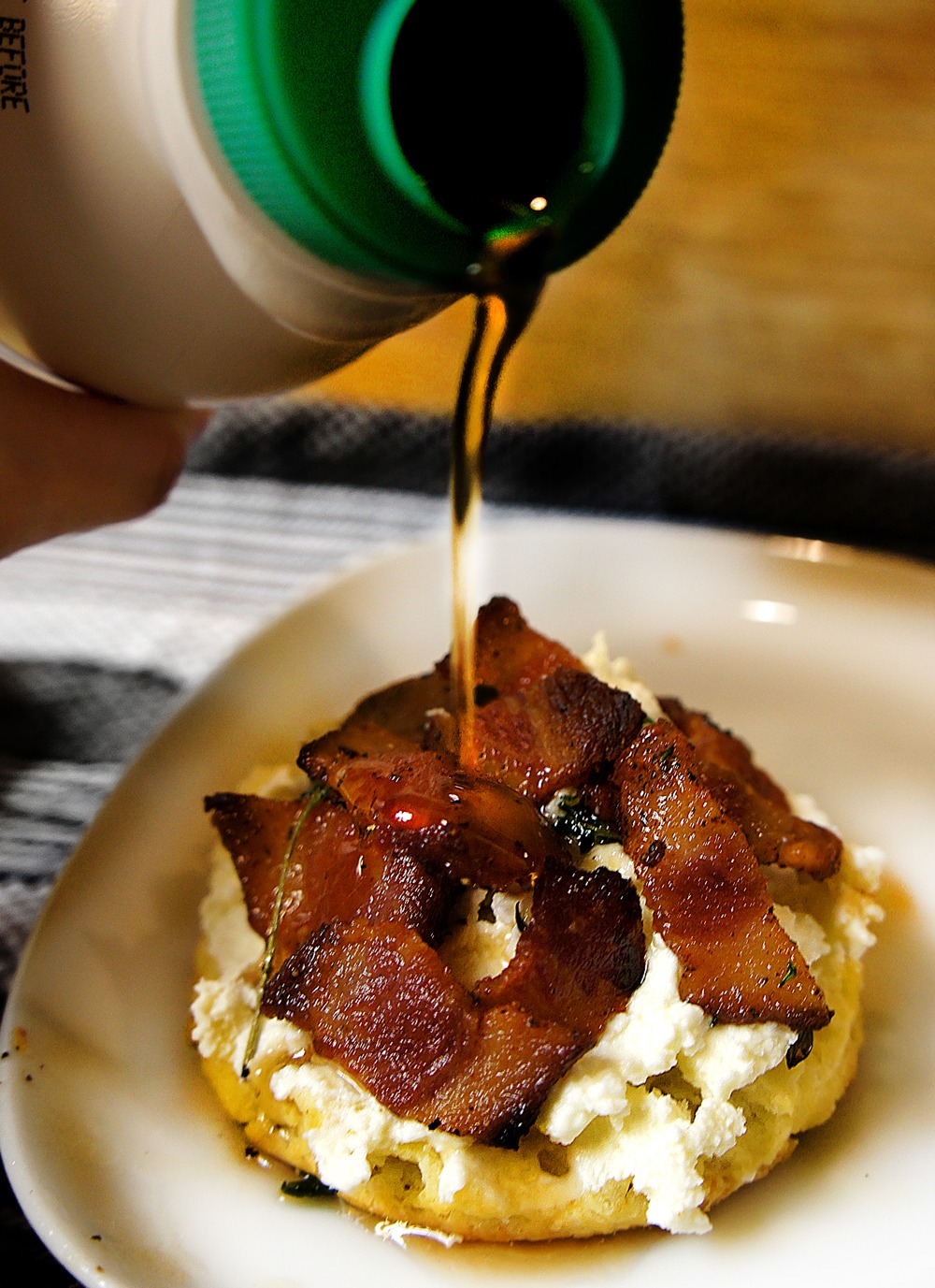 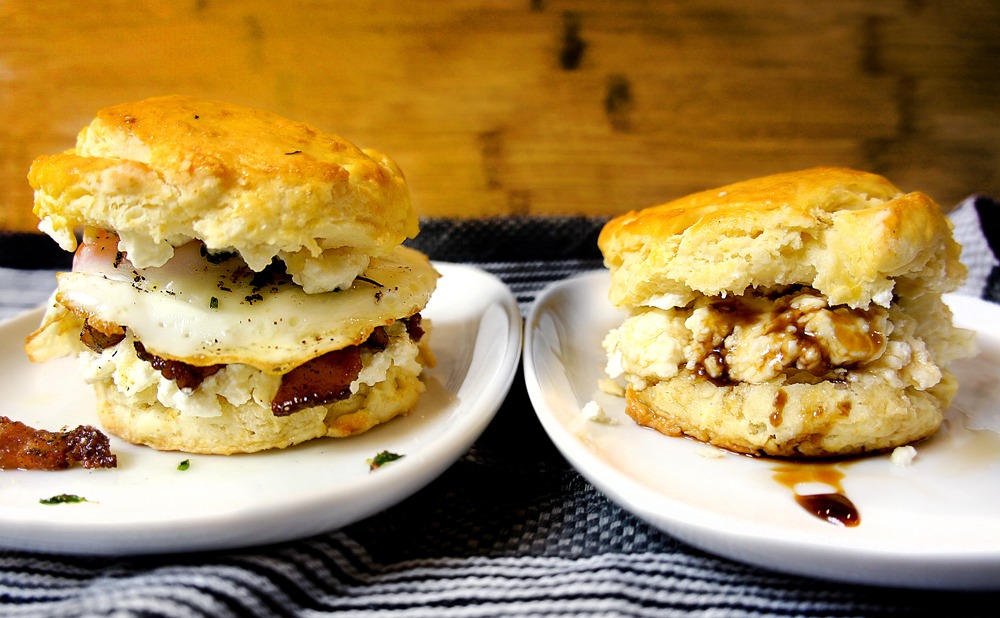