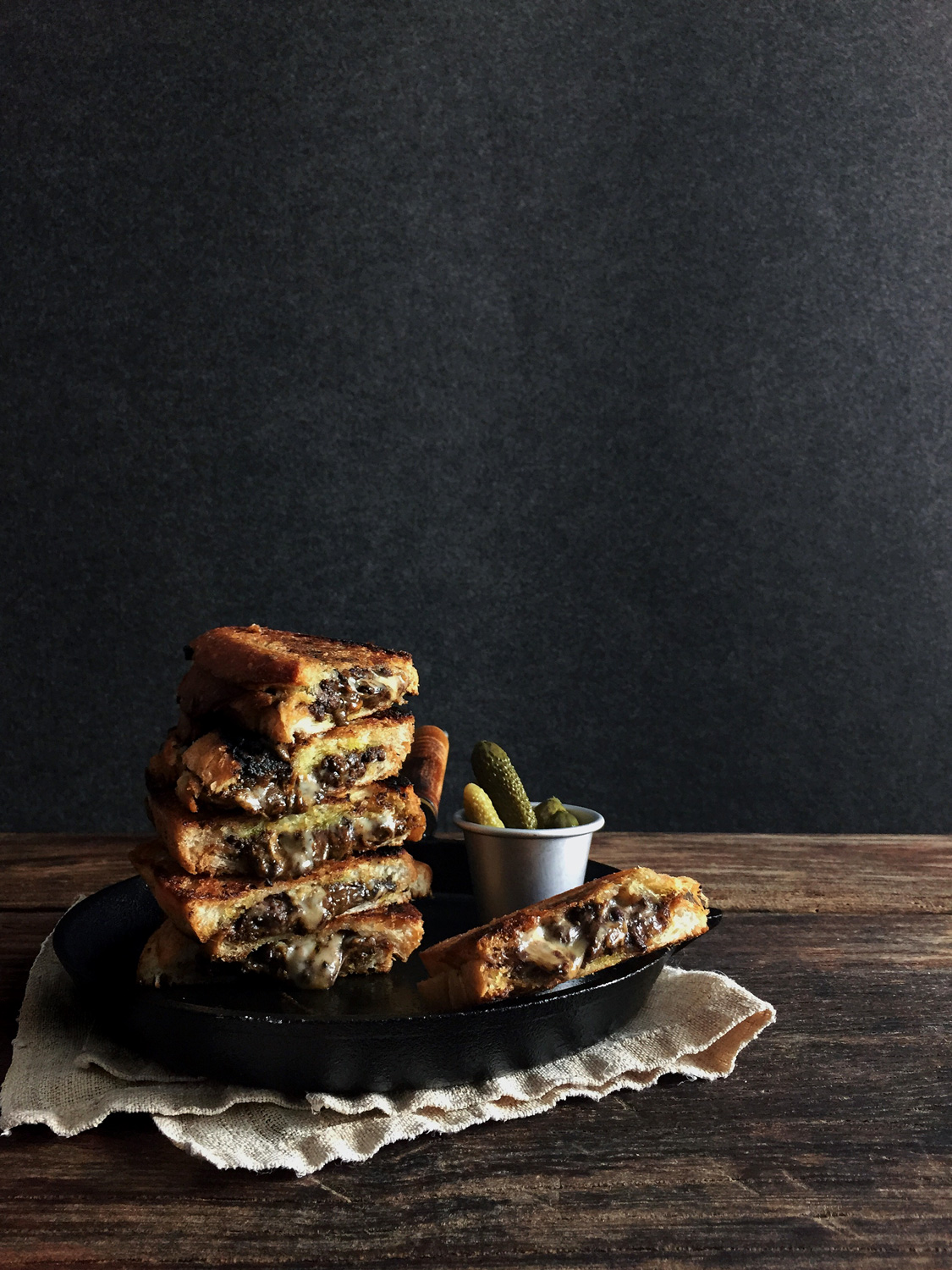 In All recipes, Dairy, Meat, Quick Meals, Snacks, The Shits I Eat When By Myself

THE SHIT I EAT WHEN I’M BY MYSELF – GRILLED CURRY CHEESE, iPHONE ONLY 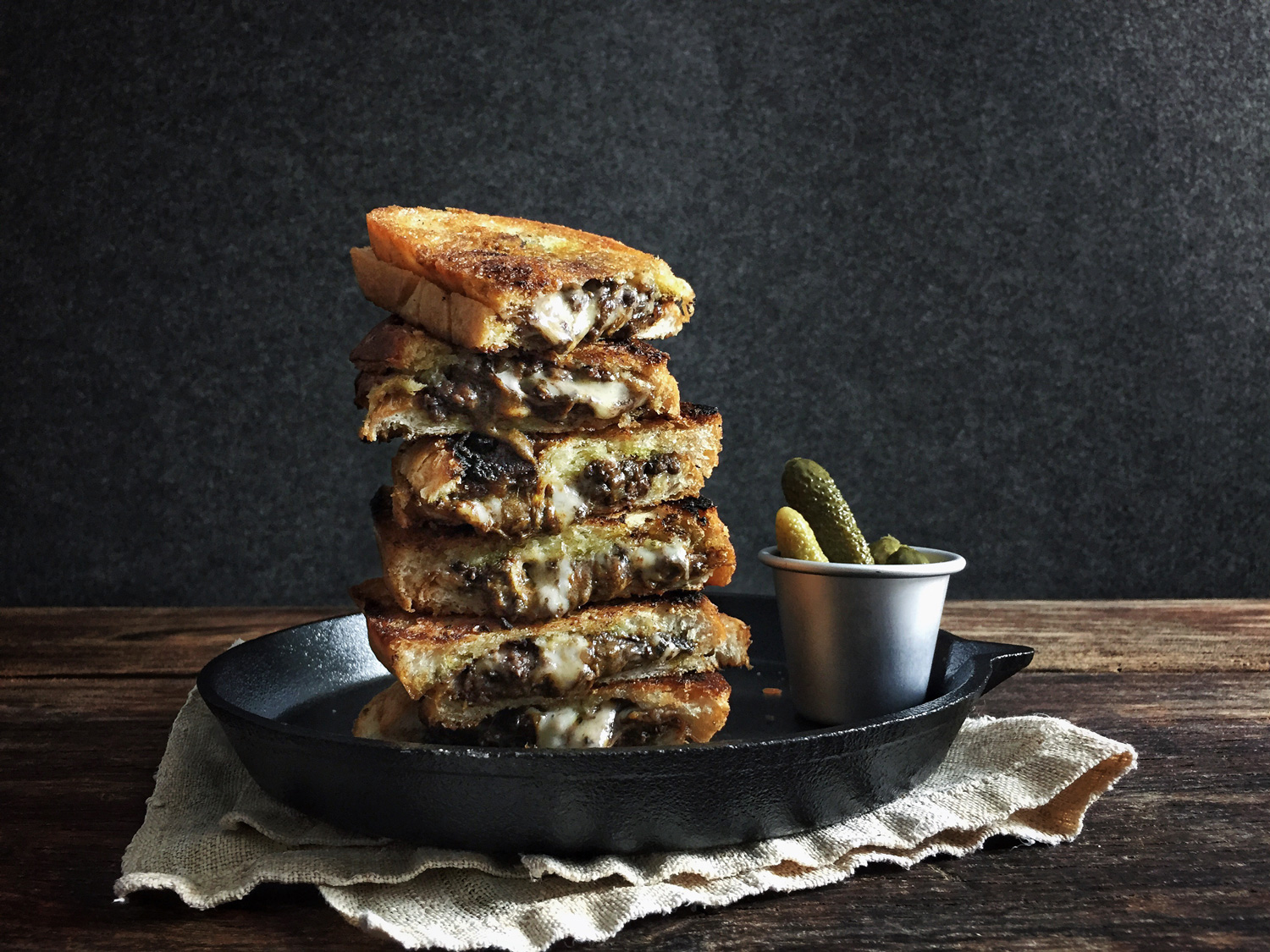 NOT KNOWING IF (THE SWEAT) WAS DUE TO THE HEAT OF THE KITCHEN, OR HOT-FLASHES AS EARLY SIGNS OF MENOPAUSE

OK, so it’s been awhile since I last did The Shit I Eat When I’m By Myself Series, and I thought today – the day I turn 35, the day when the oestrogen has officially left the party, the day when avocado becomes a face-cream instead of food – is a good time to rekindle (it’s called letting it go).  And also, because I got this lovely birthday present from you-know-who, I thought I will follow Tiffany and do a post entirely shot/edited by iPhone 6 only!  Initially, I thought it would be the most liberating thing ever, not having to carry a heavy and bulky camera while dripping sweat, not knowing whether it’s due to the heat from the kitchen or hot-flashes as early signs of menopause…  But actually, trying to go back and fourth VSCO Cam and Snapseed to edit photos on a phone-screen, made me feel that this is probably more of a thing for the twenty-something hipsters, than the thirty-something demographic born with severe technology-defects.  So I don’t know… until now, I still can’t decide if I like working this way…

Anyhow, this is No. 5 for The Shit I Eat When I’m By Myself.  Sticking to the tradition of being completely non-sense, it’s a mixture of minced beef, melted Japanese curry cubes (boosted by cocoa powder!) and shredded white cheddar that you can keep in the fridge, then when emergency hits (like the day you turn 150), it can be quickly melt into a spicy and intense grilled curry cheese in between 2 slices of crusty country loaf (balanced by an added sweetness from raspberry jam!).

So enjoy, I’ll see you on the other side. 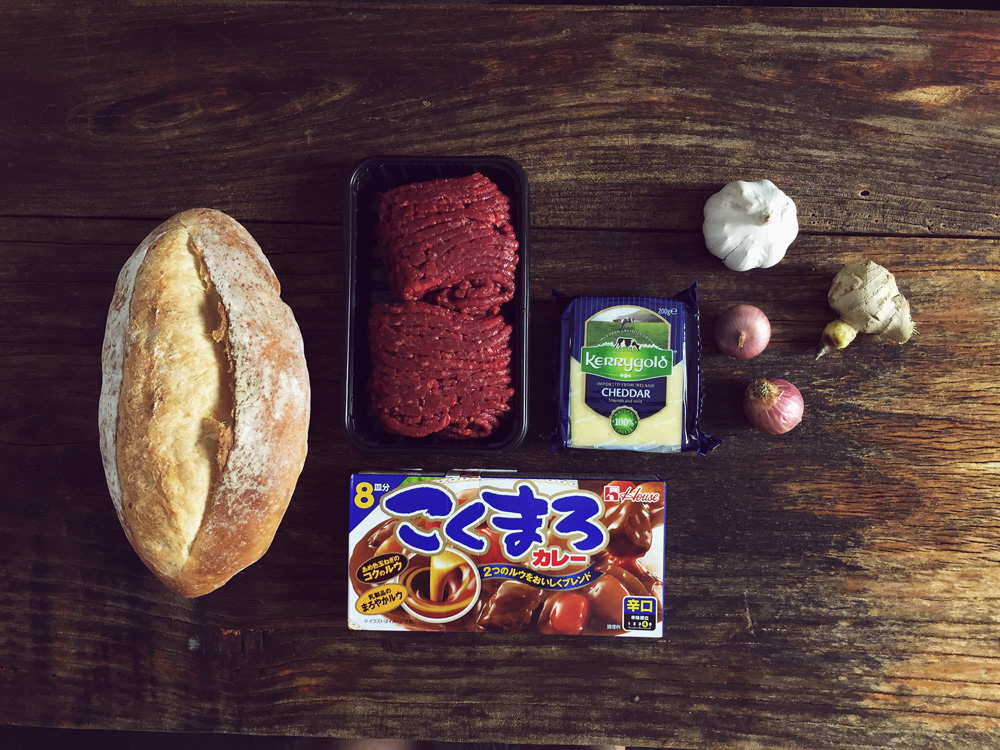 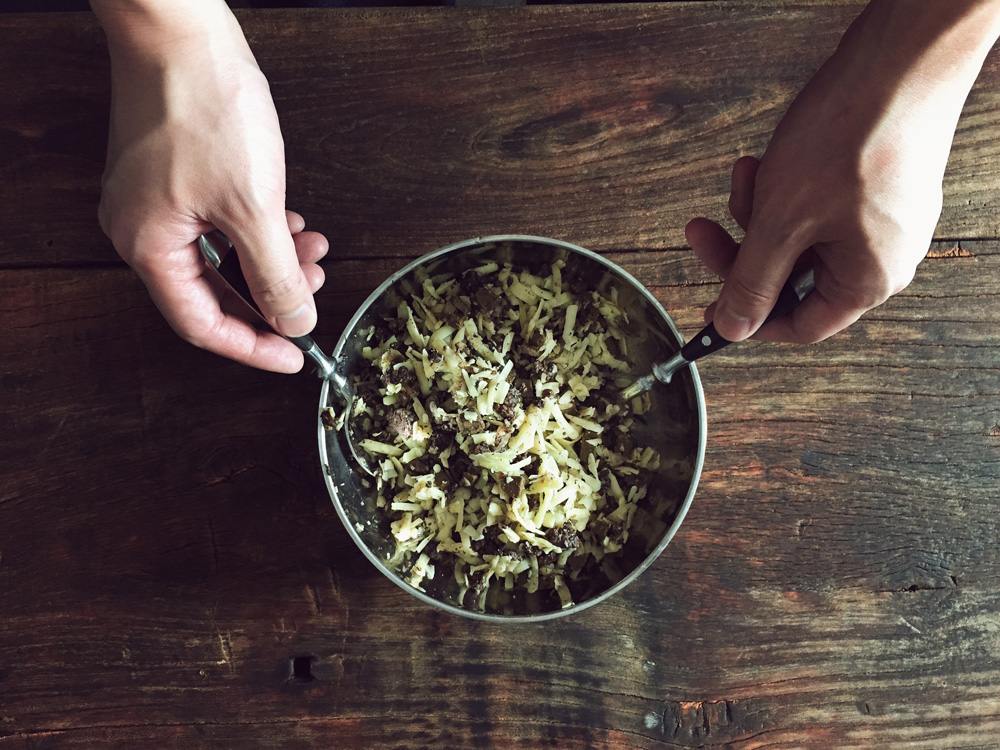 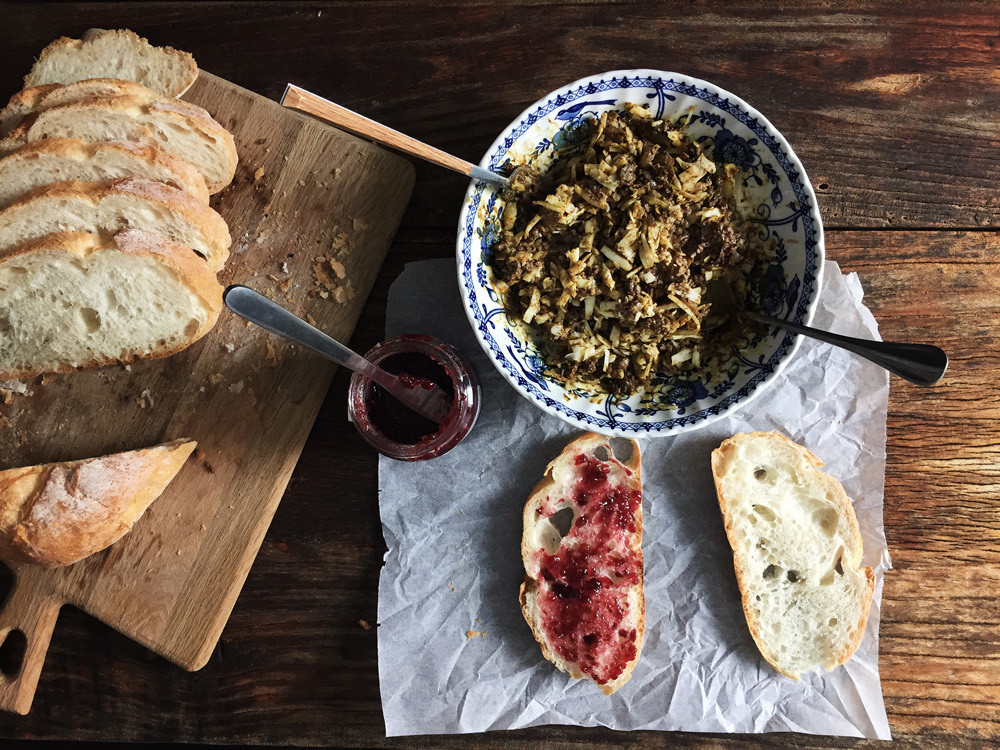 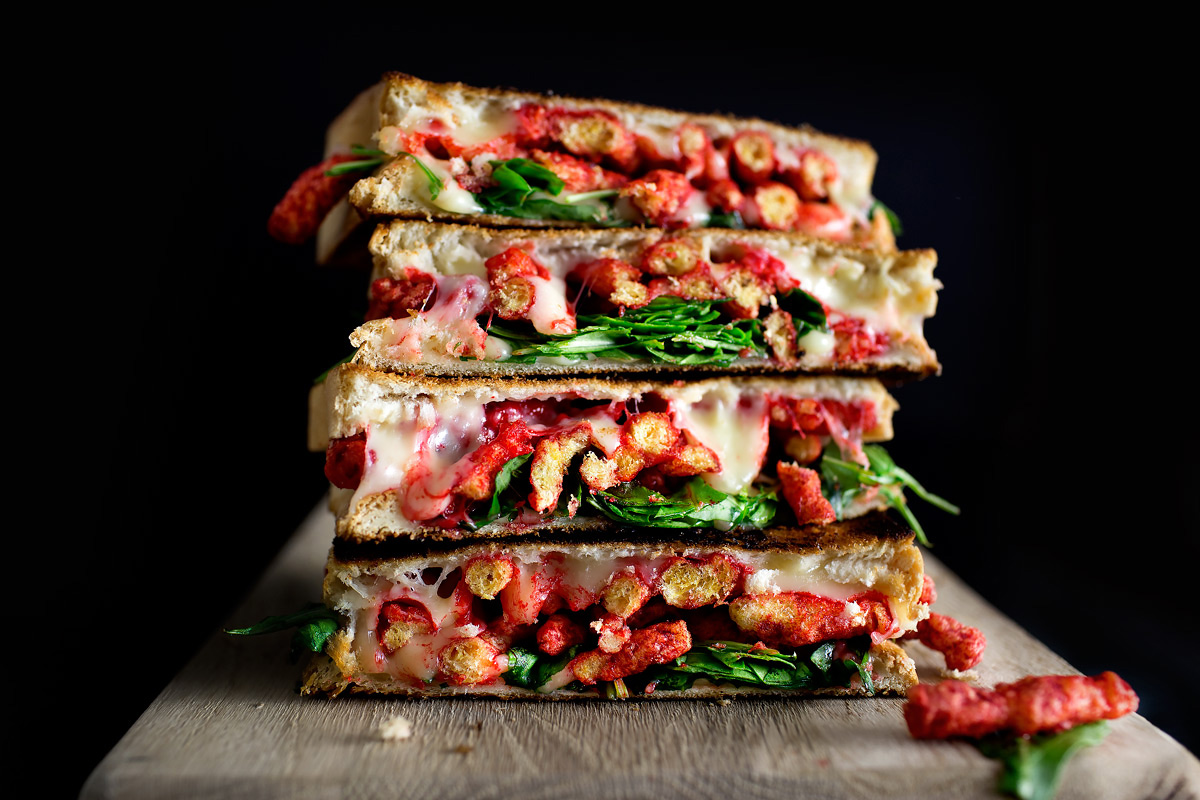 In All recipes, Quick Meals, Snacks, The Shits I Eat When By Myself

If you thought, we shared a passionate connection yesterday over orange ramen for our new segment – The Shits I Eat When I’m By Myself – well, here comes true love.

True love is… true love is…  I say true love is when your other half walked in on you, with this throbbing in your mouth, said nothing, walked away and pretended like nothing happened, and didn’t cancel your credit card…  Uh, what was in oh I mean, my mouth you asked?  Uhem… even the mere pronunciation of the words, has to come with great courage…  It’s sharp gouda grilled cheese.  ……………..  OK.  OK… that’s not entirely honest.  Wwwell, it’s sharp gouda grilled cheese with baby arugula, and something tangy, spicy hot and fabulously crunchy in between…  What?  Now you’re just prying…

Fine!  FINE!  It’s flaming hot crunchy cheetos!  It’s FLAMING HOT CRUNCHY CHEETOS!  And I fucking love this shit!  Ya happy now?  It’s gooey melted gouda grilled cheese, but with a crunchy and contrasting texture sandwiched right in between, releasing neon-red powers that are, possibly, the last surviving legal addiction.  And didn’t you hear that there’s A-RU-GU-LA?  Which is, a ve-ge-ta-ble.  Which is, not just there to validate that I’m still a human being, but to elevate the entire flavour profile to please anyone, who obviously, isn’t insane. 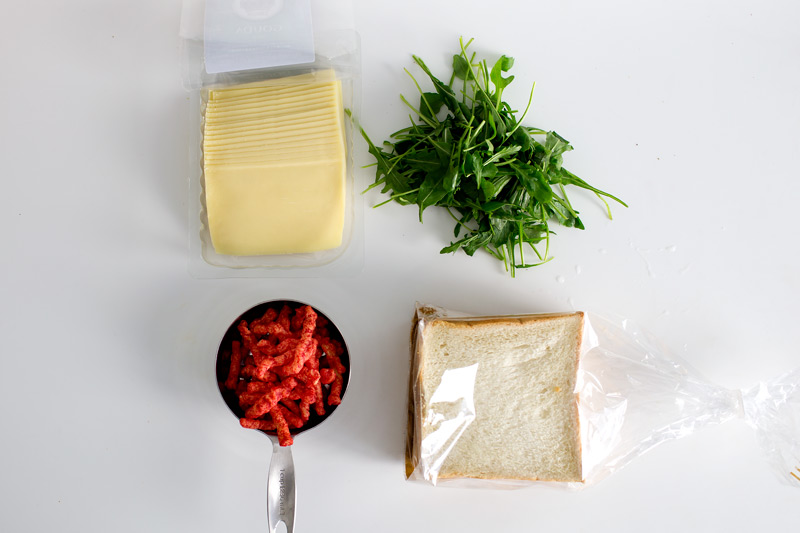 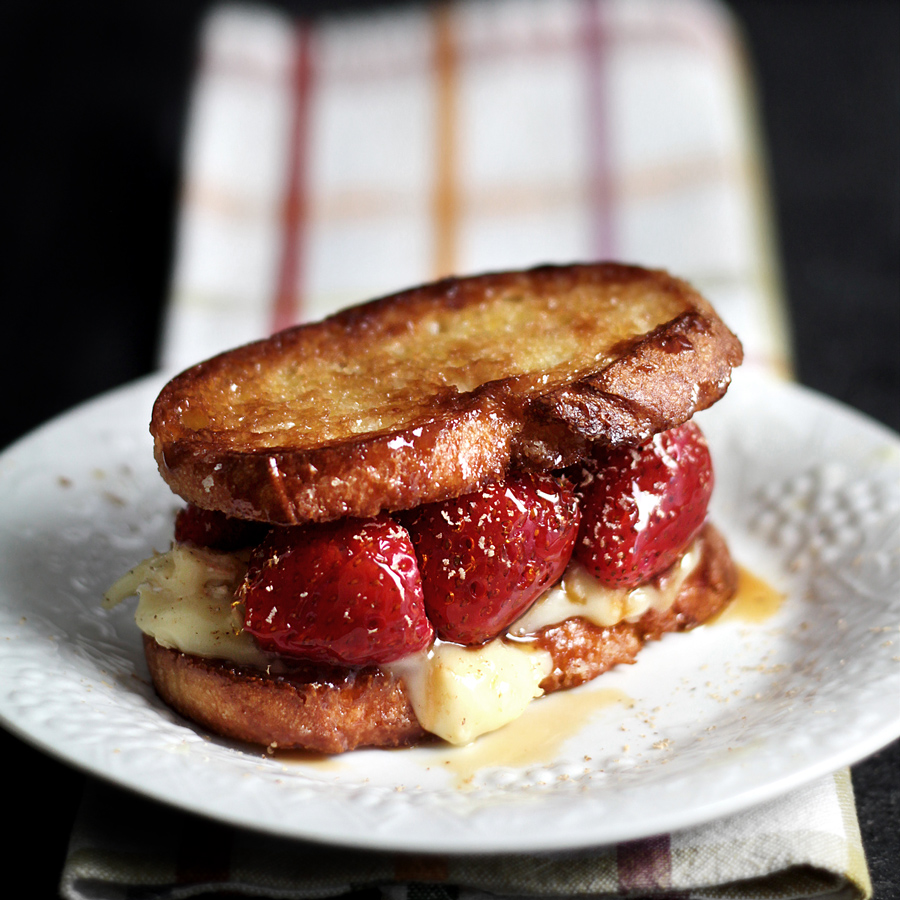 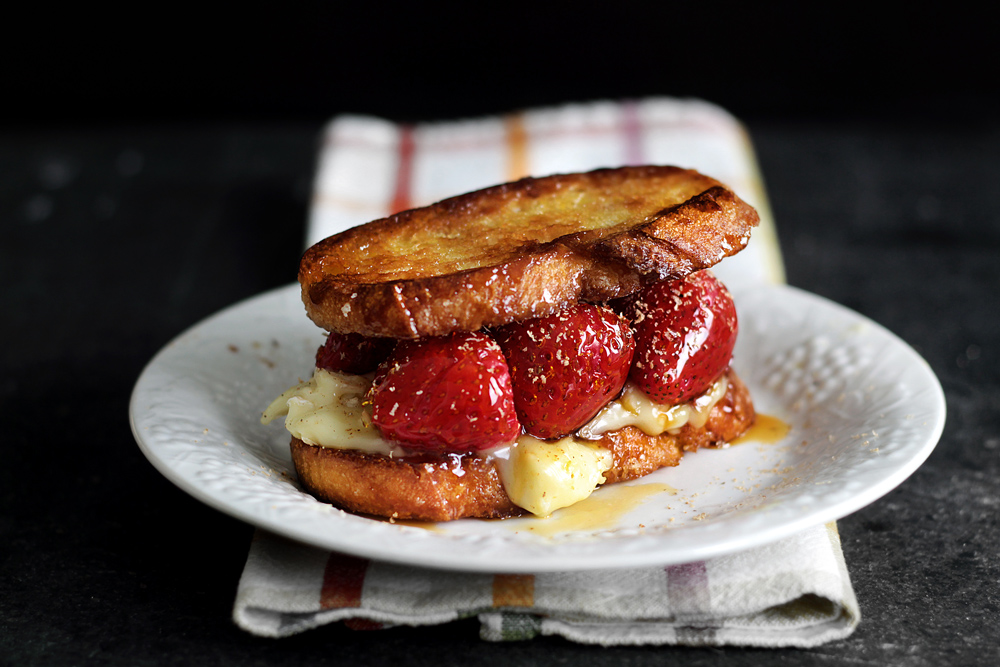 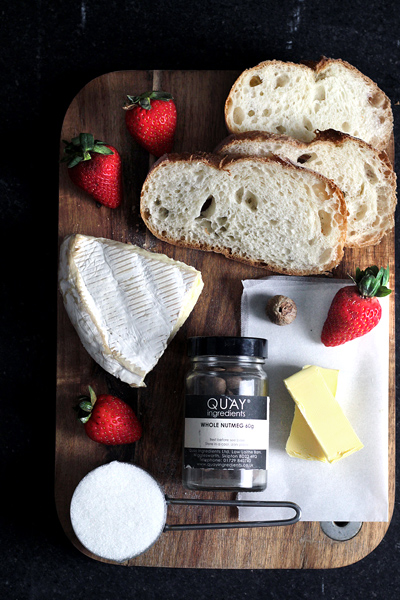 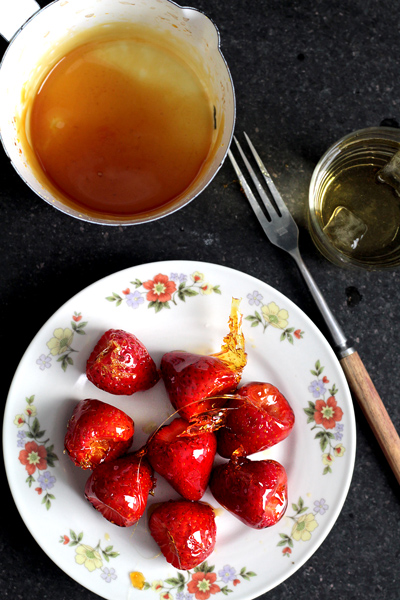 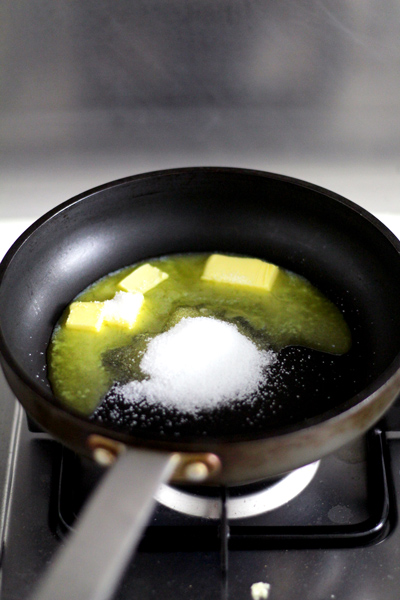 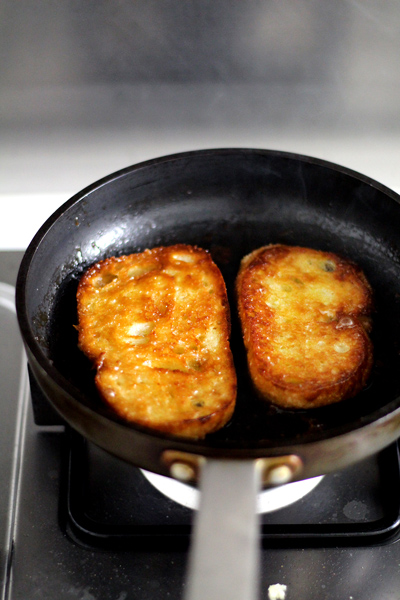 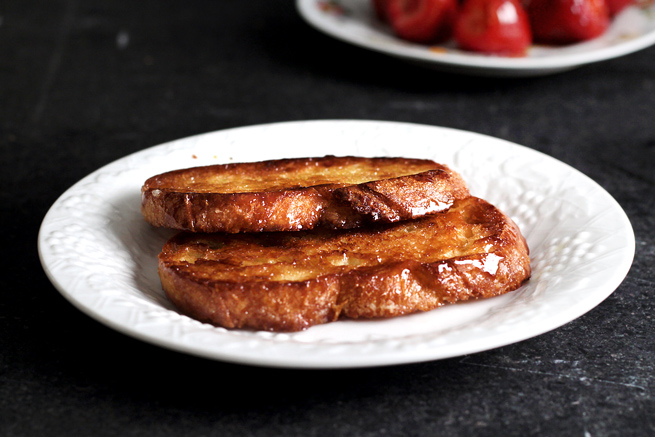 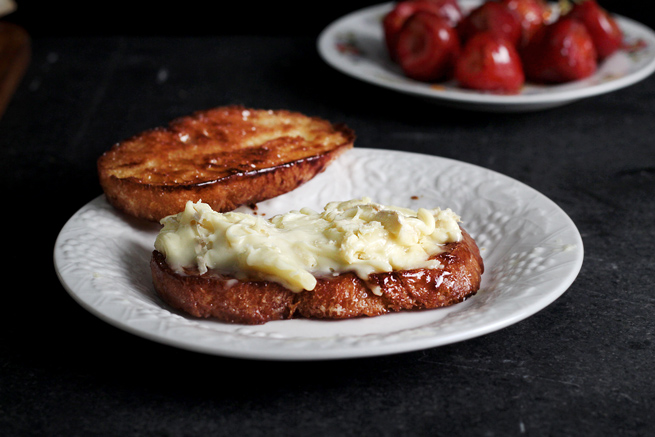 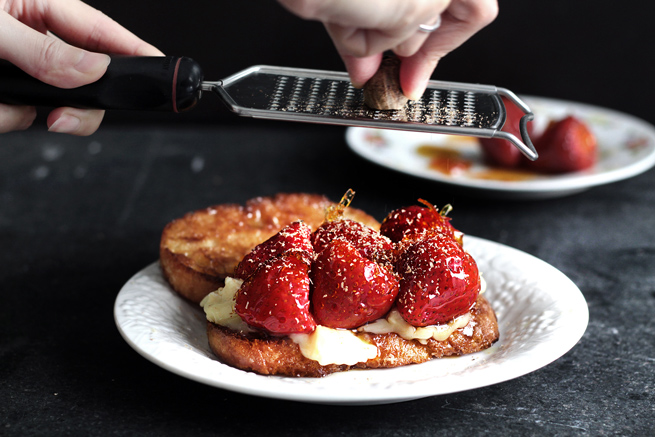 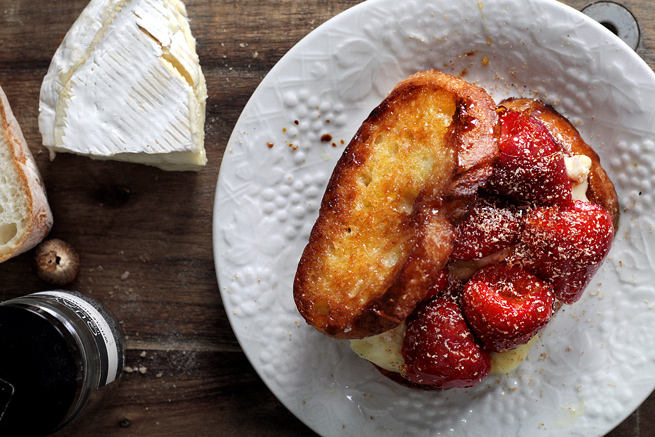 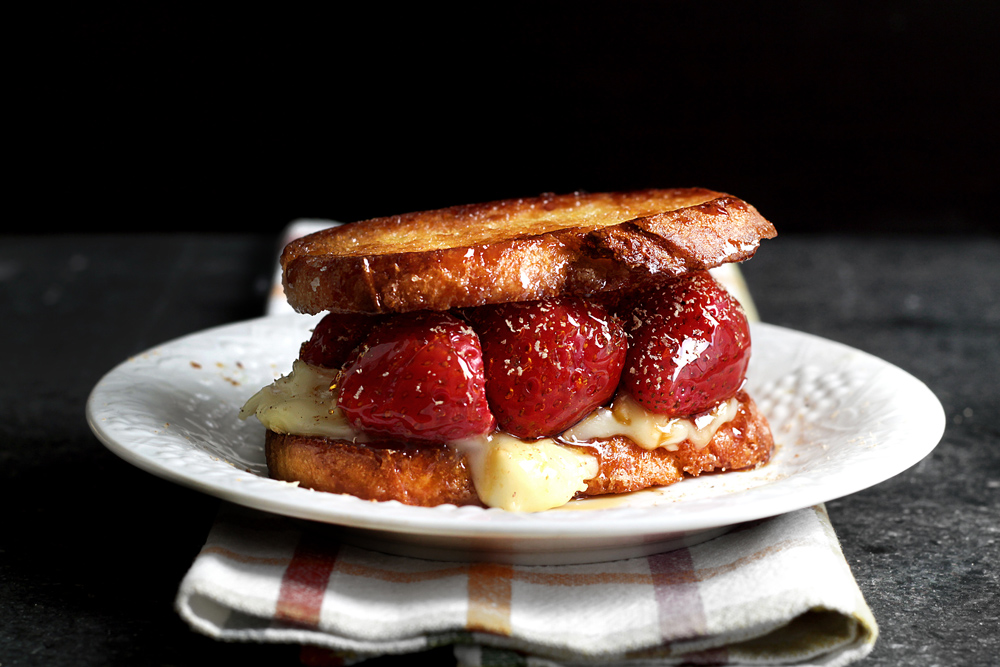 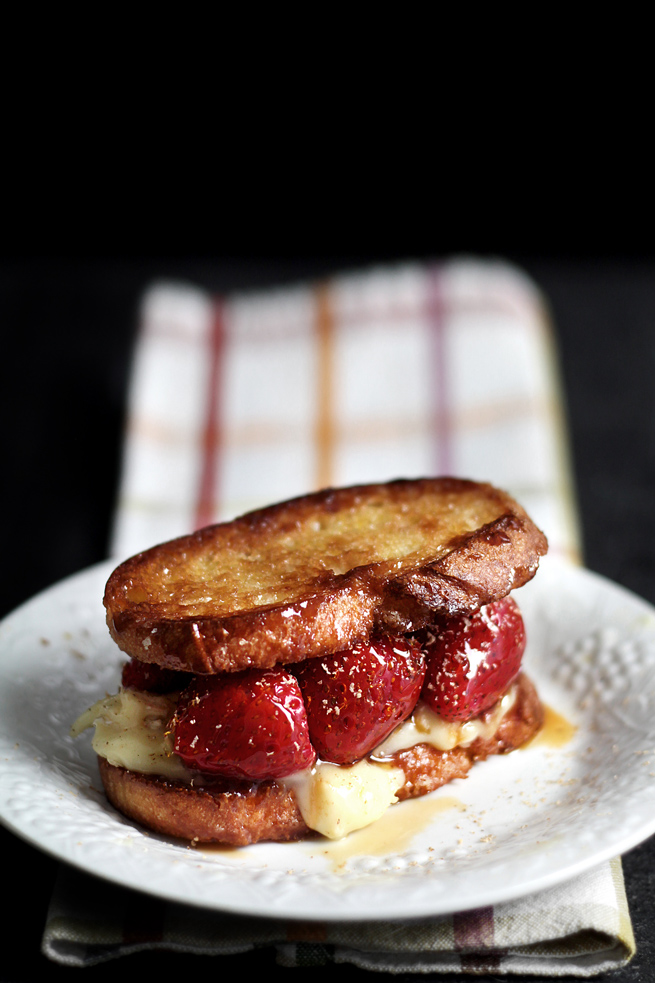 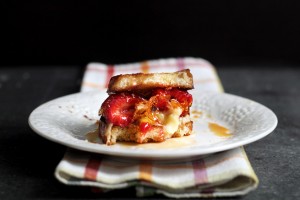 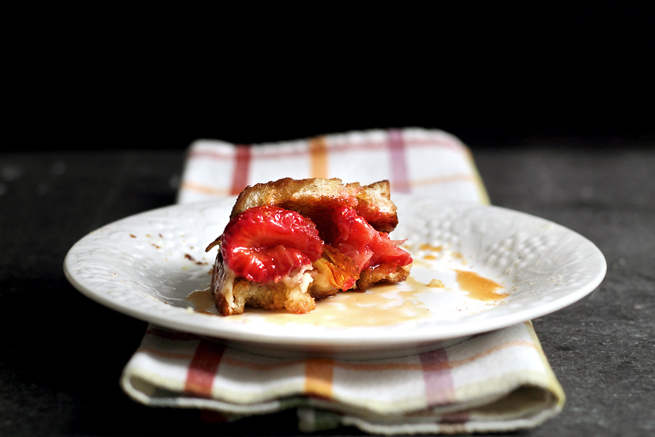 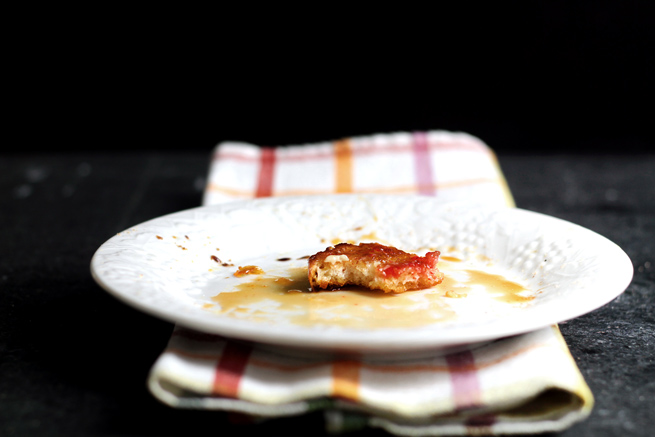 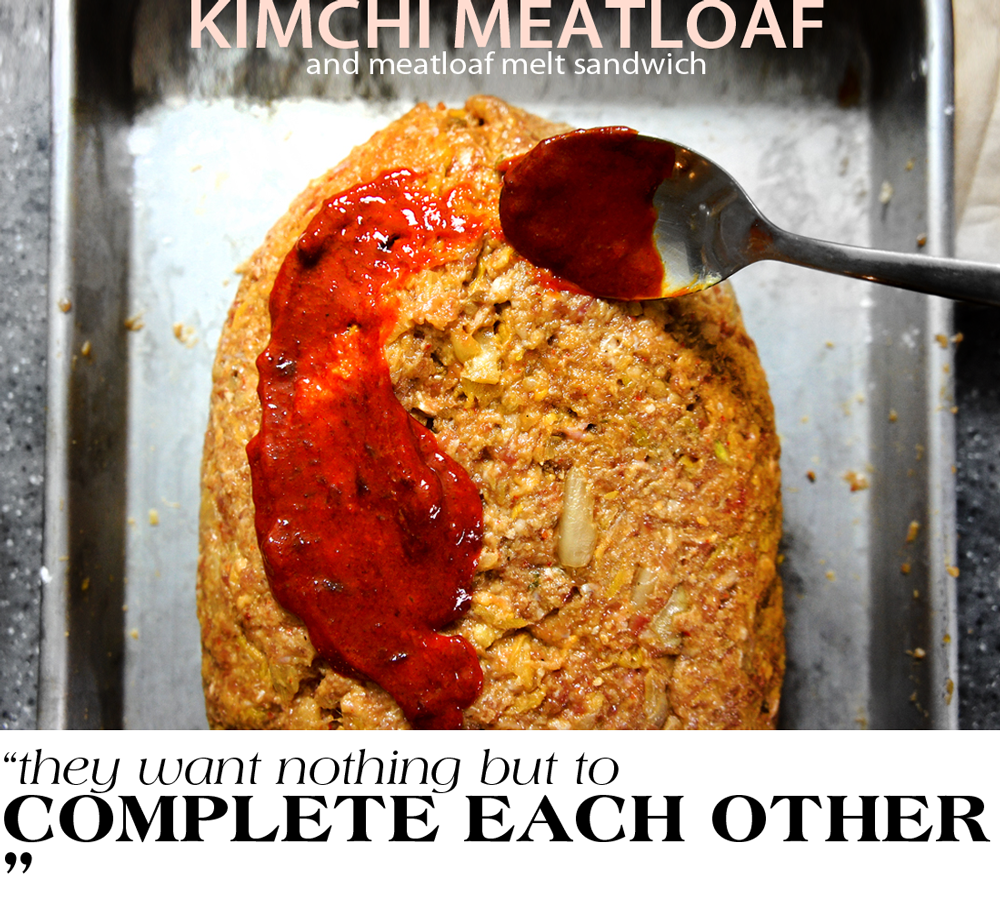 In All recipes, Meat