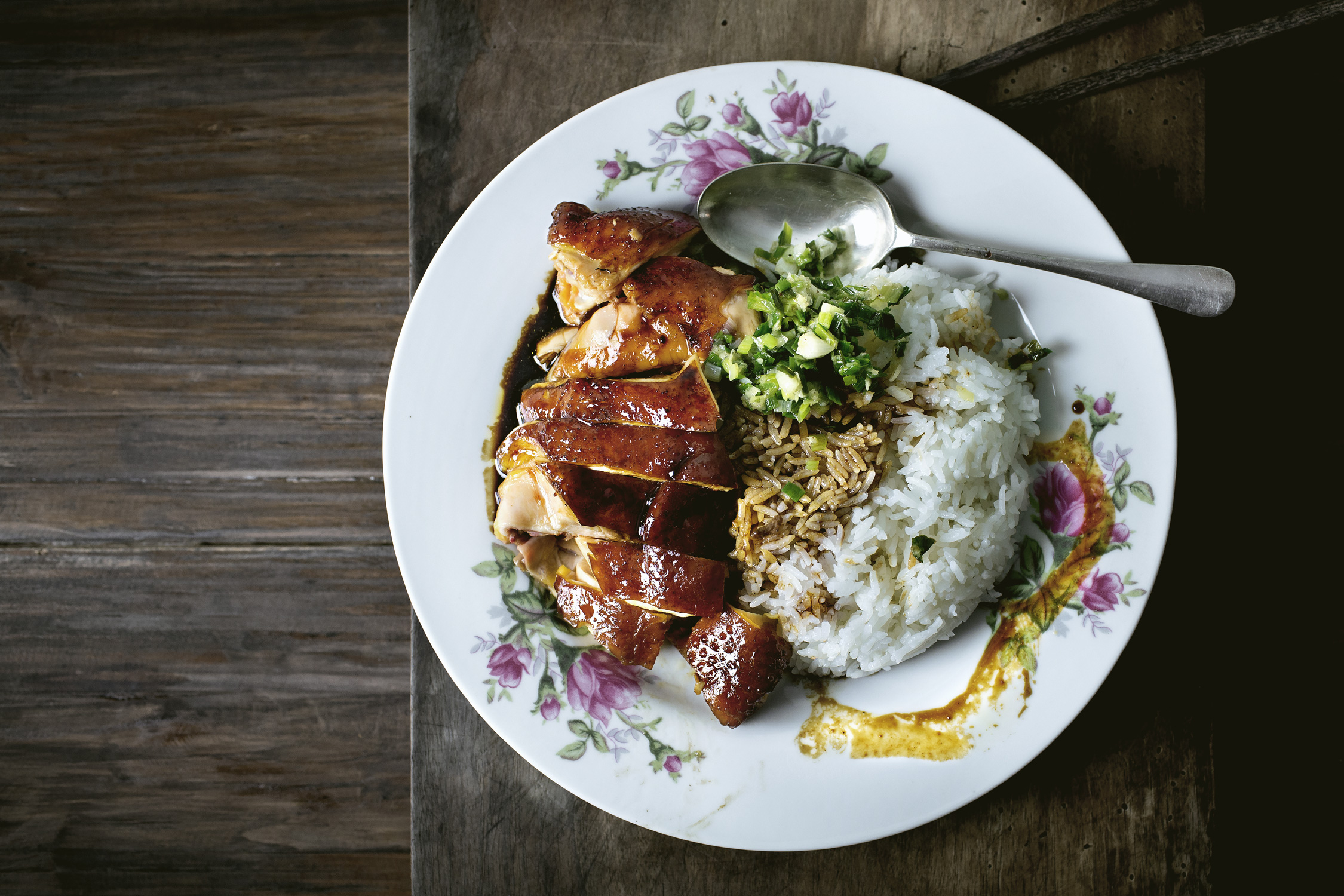 Sometimes ideas arise upon the complete rejection of another.  This recipe is a perfect example of such.

The other day (I say “the other day” a lot, which really means “last year”), I was watching this video on YouTube, a michelin-starred chef explaining how to make his “perfect roast chicken”.  Curious, so I watched, as he demonstrated with a straight face on how he cooks his chicken slowly inside a low-temperature oven for 4 hours, then afterwards, finish browning the skin inside a skillet, and after which, injecting the chicken with melted butter.

I mean, is this guy serious?

I don’t even know where to begin.  First of all, the whole notion that one could crisp up a whole, uncut chicken inside a skillet is basically again the laws of physics.  The extremely curvy and maneuvering silhouette of a chicken is exactly the reason why people resort to a three-dimensional heat source to tackle it in the first place.  Steaks, flat.  Chickens, curvy.  Simple logic.  Is he Doctor Manhattan?  Did his pure geniuses allow him to leap into another dimension of space and time to warp his chicken to the skillet?  Of course not!  That patchy-browned chicken looked like it just suffered from a skin-graft.  But you know what, even if, just because I’m nice, even if one could disobey the laws of physics and pull this whole thing off, why would I spend 4 hours of slow-cooking in the pursuit of supple meats, just so I can over-cook it later while I roll it around a super hot skillet like a total moron?  “Not too long in the skillet.” he said.  Yeah, like you mean just long enough to color the outer patch of the thighs plus to realize that this is complete idiocy?  No injection of butter can help you, my friend.

Can you believe this guy….

Even though his low-oven chicken method is, in my humble opinion, not the answer for crispy skin roast chickens, it would actually… work perfectly for something else.

I don’t know if you know, but there is a whole other branch of philosophy on cooking chicken where crispy skins are actually not the holy grail.  Instead, it’s the extremely supple, juicy, and almost silky slick texture of the meat that reigns supreme.  And this dish called soy sauce chicken, seen hanging inside the steamy windows of Cantonese restaurants everywhere in the world, is where cooks put their relentless pursuit for such texture to the test.

Traditionally, the chickens are cooked inside a pot filled with a shallow, simmering layer of soy sauce-mixture, turning every so often until the skins take on a deep amber sheen and the meats are cooked to perfection, after which it’s hung to cool down to room temperature in order for the salty skins to tighten and become elastic, and the meats to become “jelled” almost.  Not that this traditional method doesn’t work, but it has its flaws.  First, again, uneven heat source, making it that much more difficult to cook the chicken evenly.  Second, the risk of burning, which requires the cook to stand-by and babysit the chick as it matures safely into perfection.

A low temperature oven, solves both.

The whole chicken encased in its own skin inside a low oven is almost functioning as a sous-vide operation, and on top of which, the coating of that deeply savory and aromatic soy sauce mixture never gets burnt, but instead, gets condensed and caramelized on every inch of the skin as the meats slowly and gently comes of age.  The result, on first trial, is perfectly, and I mean perfectly silky and luscious chicken meats that literally slips down my throat, wth firm and salivatingly salty skins that, in my mind, goes head to head with crispy.

The dish is served with hot steamed rice, a good moistening from the strained sauce, and scallion oil, which is the part that will hear no objection from me. 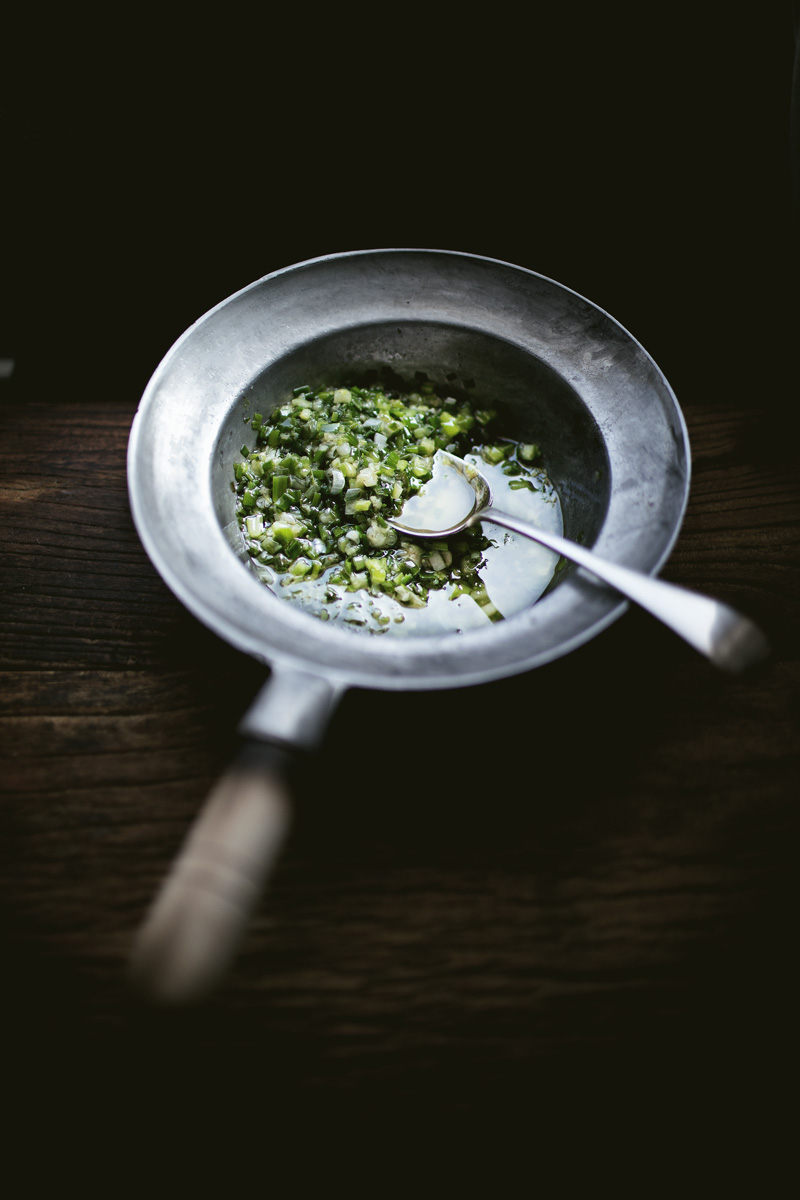 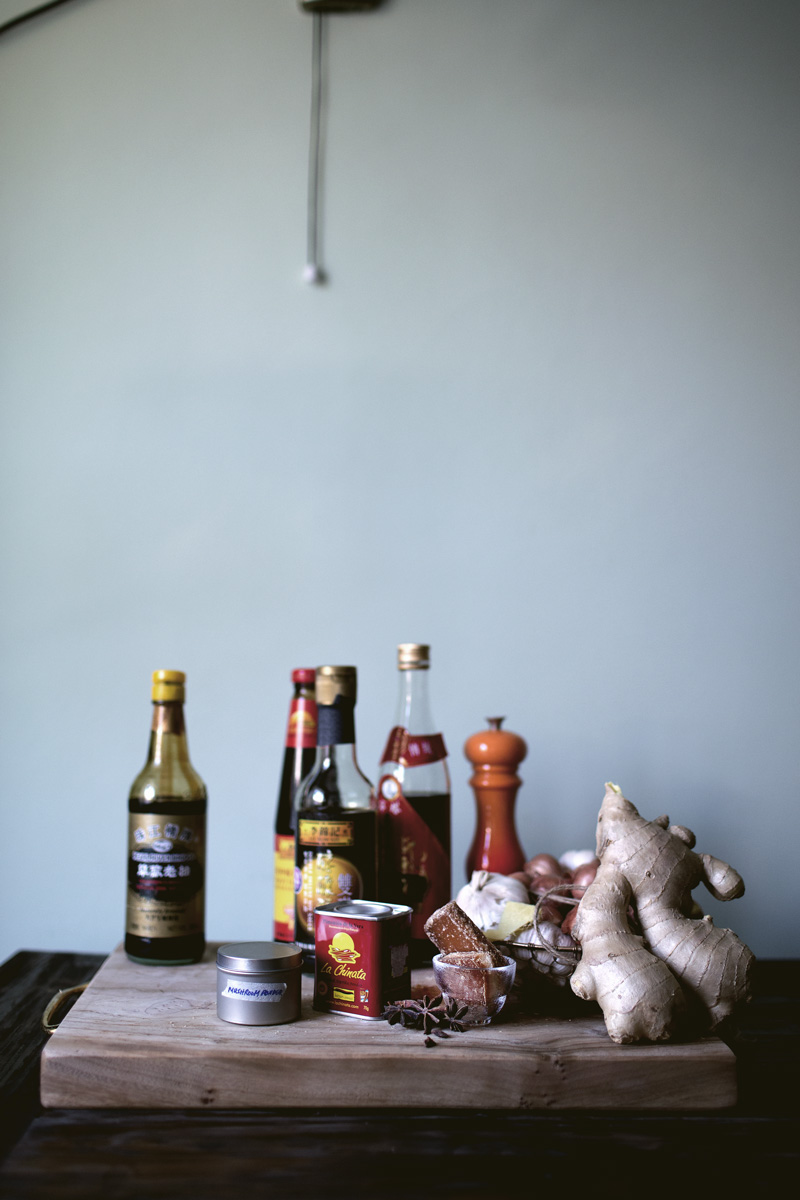 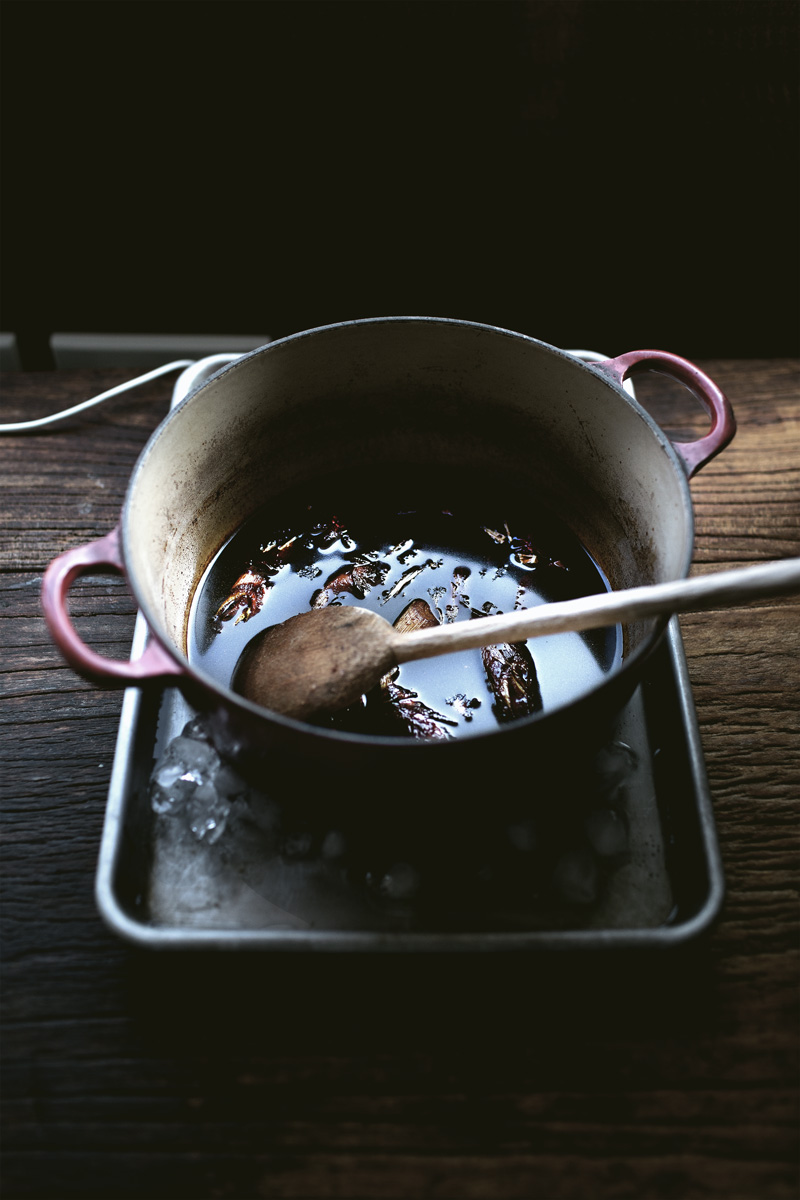 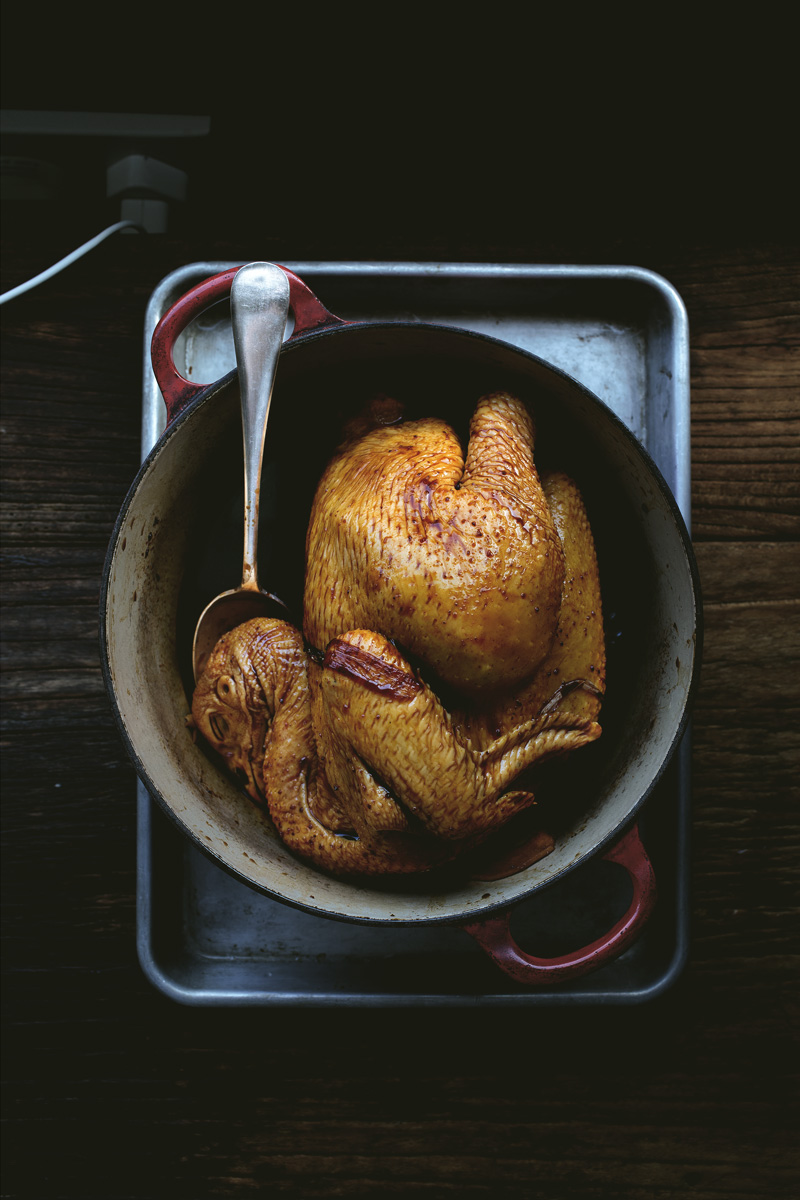 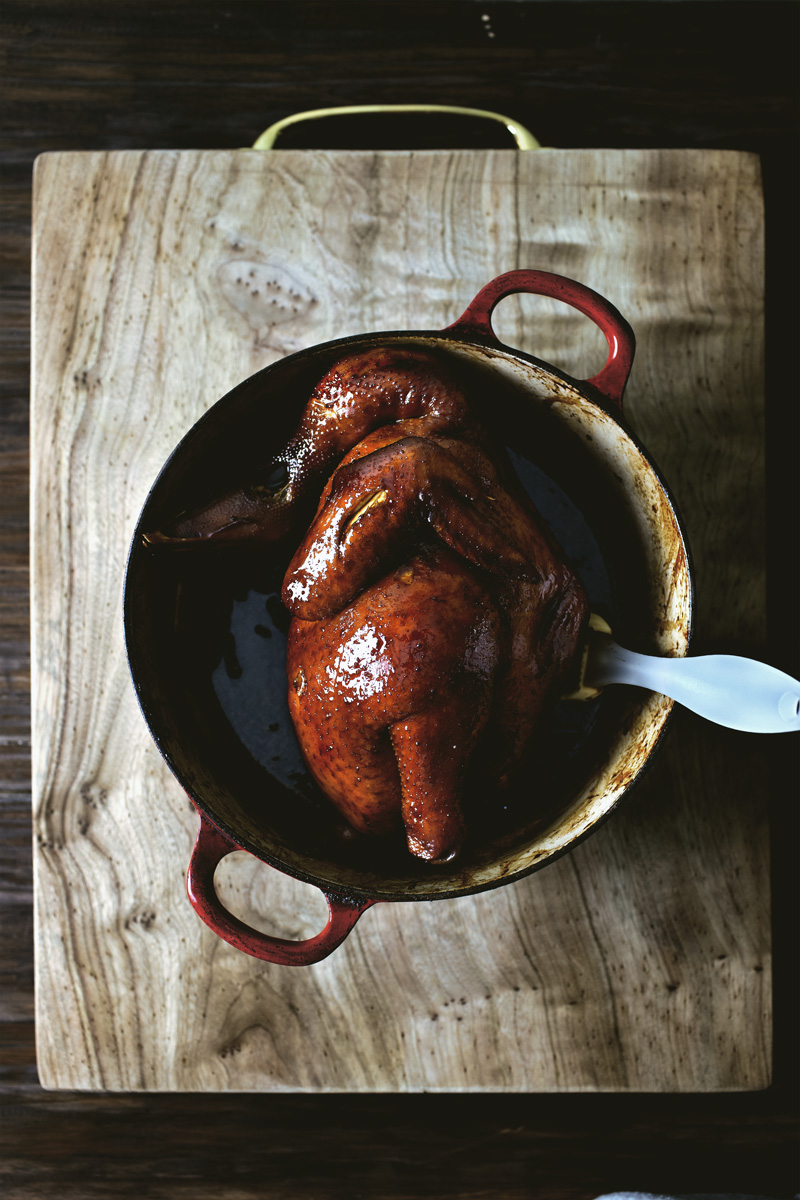 CRISPY SKINS ARE NOT THE HOLY GRAIL.

BUT INSTEAD, IT’S THE EXTREMELY SUPPLE, JUICY, AND ALMOST SILKY SLICK TEXTURE OF THE MEATS THAT REIGN SUPREME 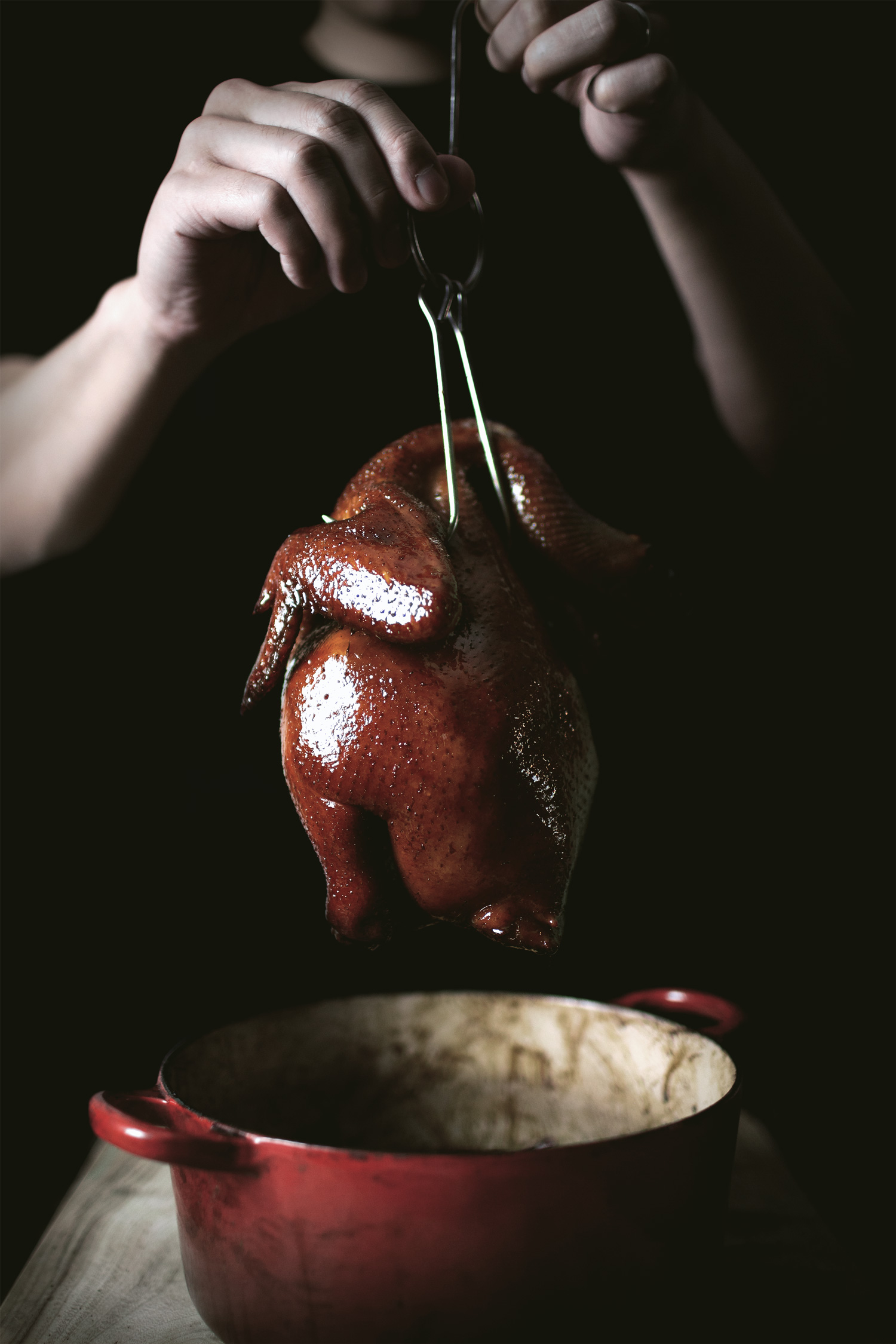 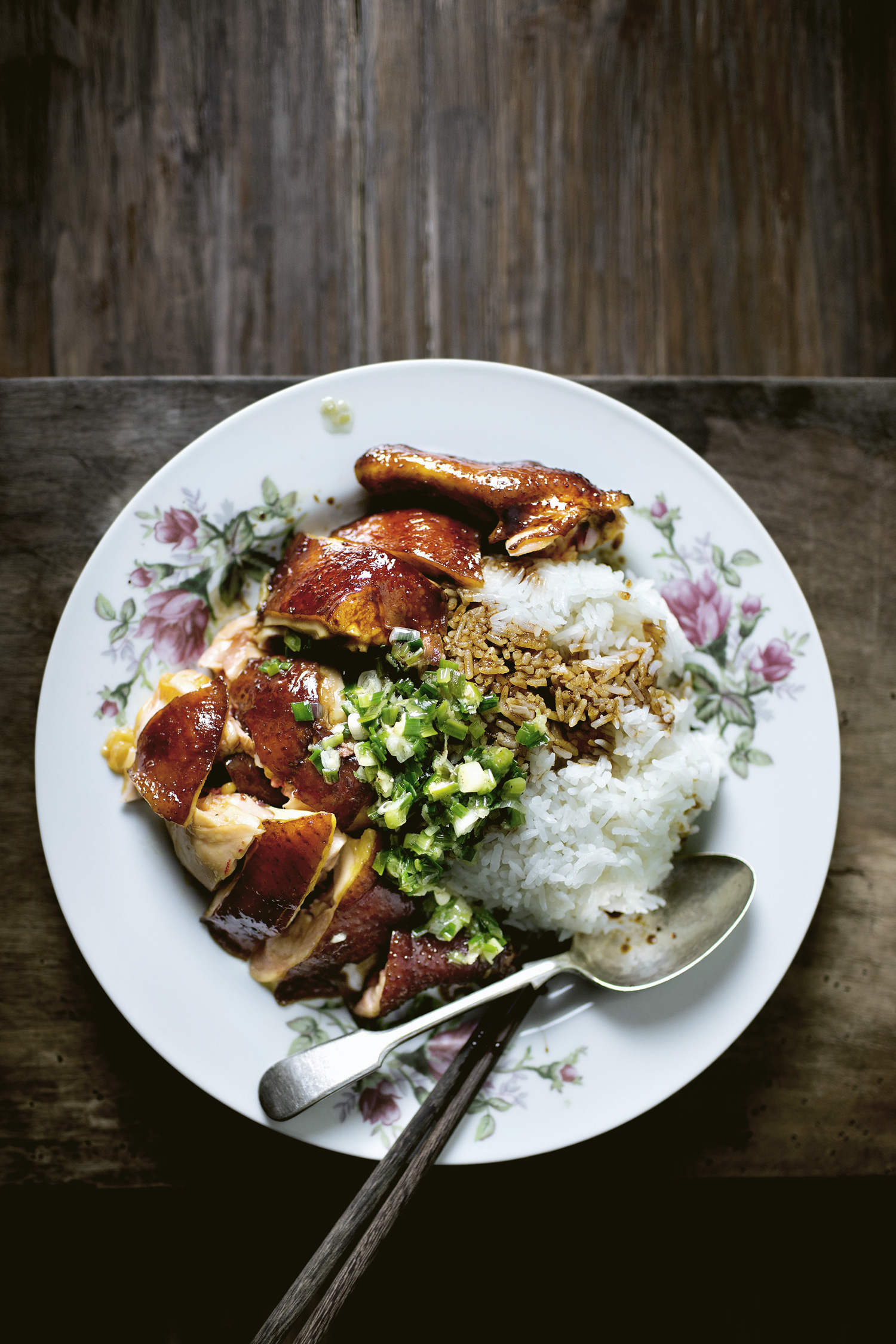 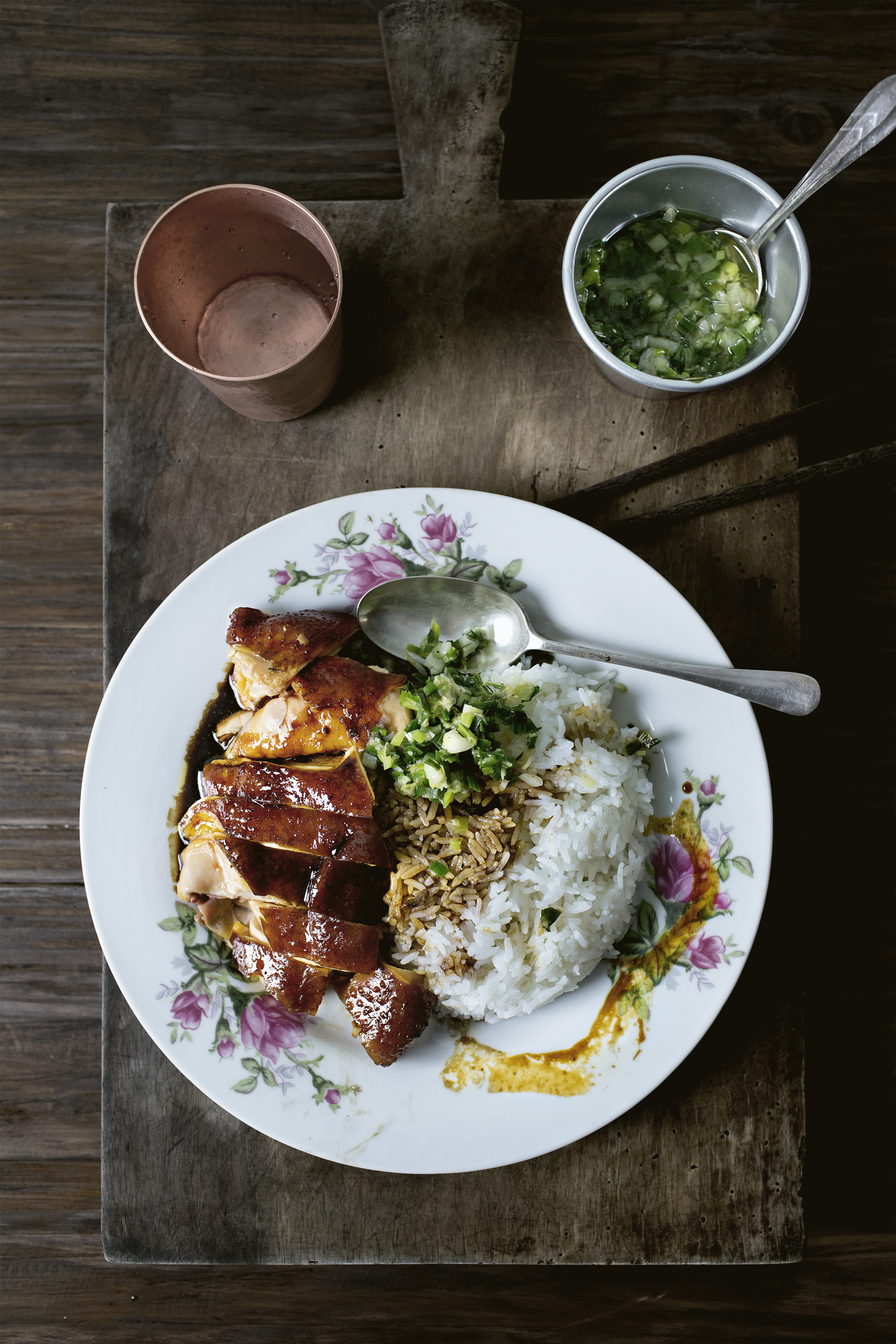 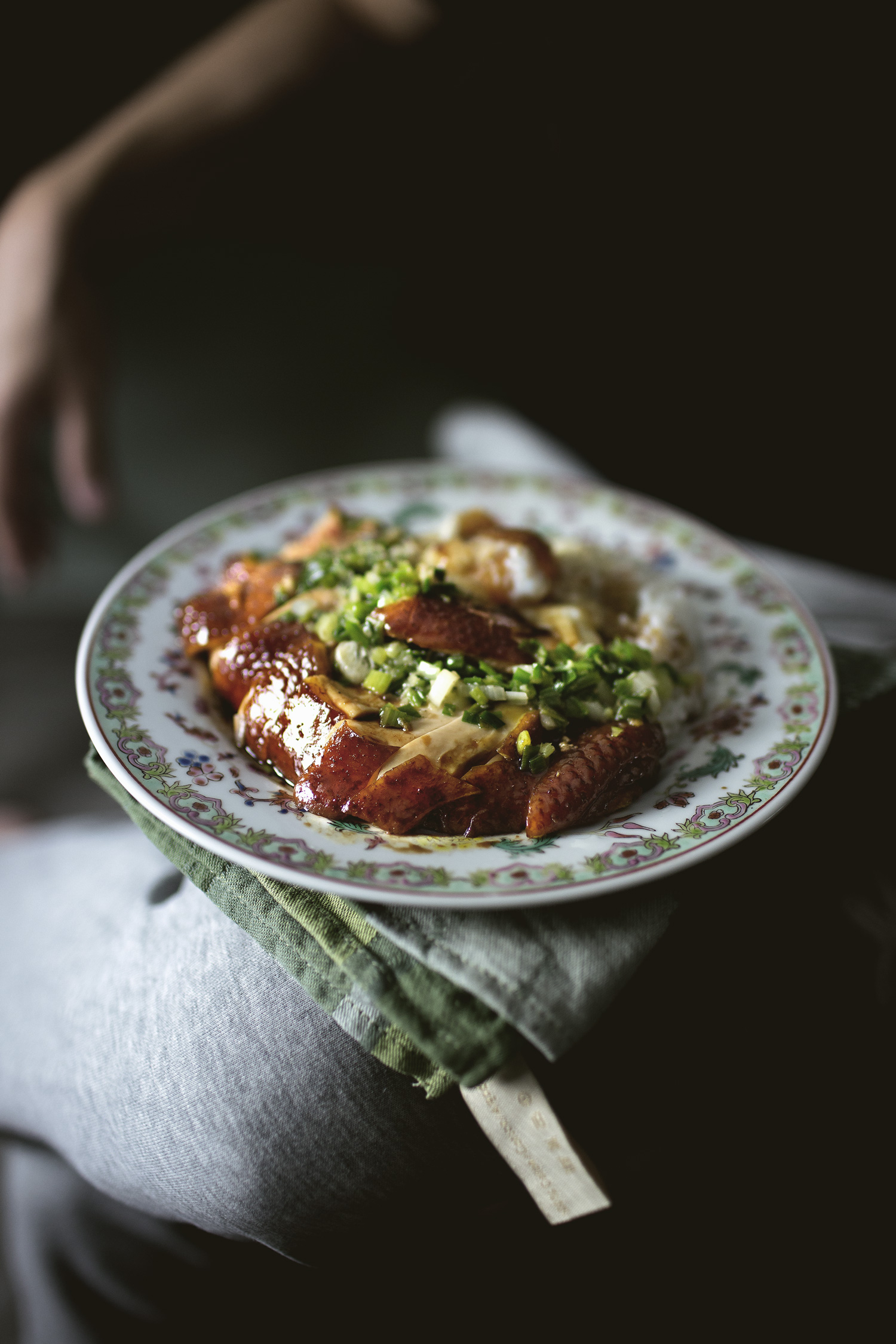 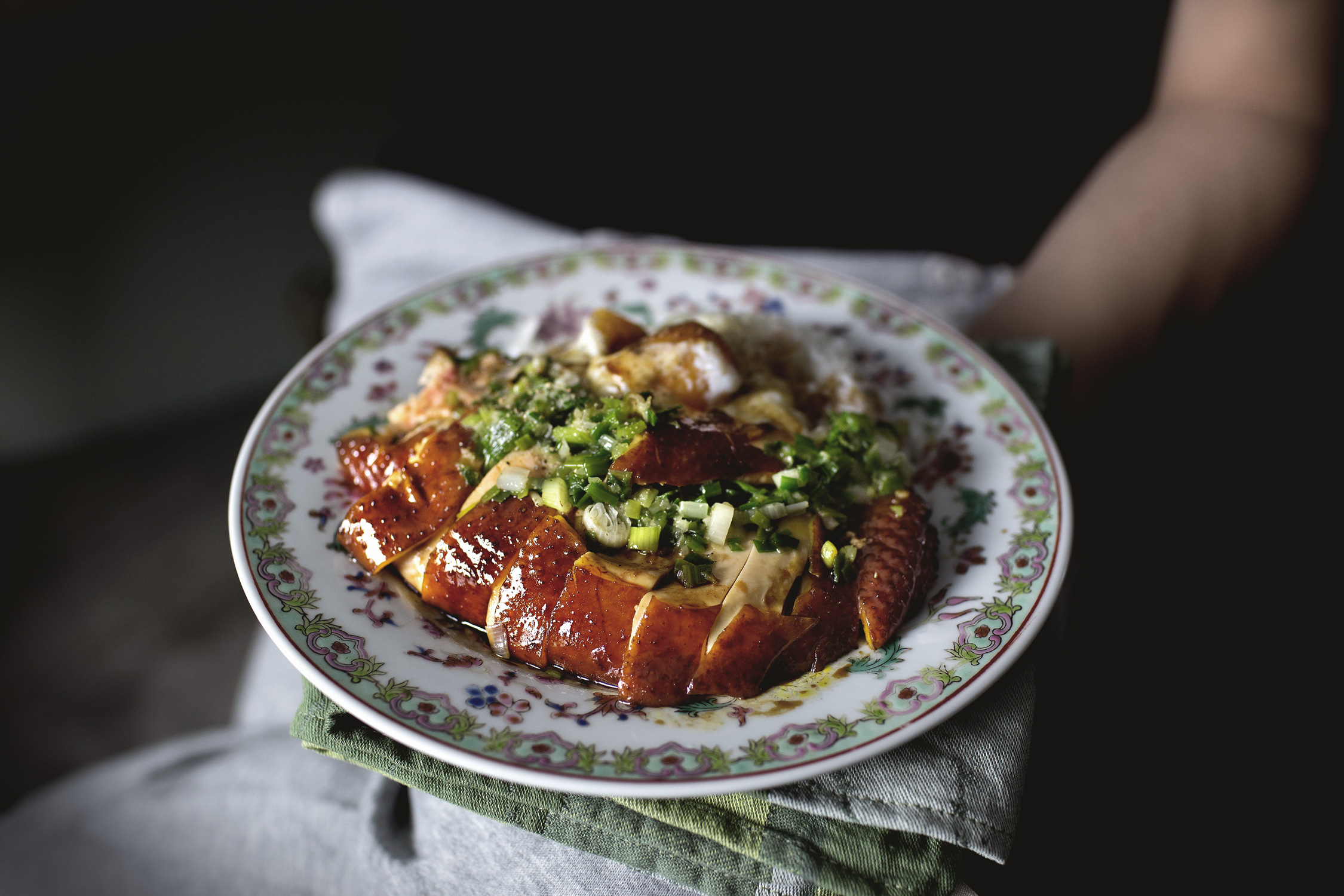 *UPDATED 2017/06/02: Added an internal temperature for the chicken for perfect doneness.

The chicken is served at room-temperature over hot rice.