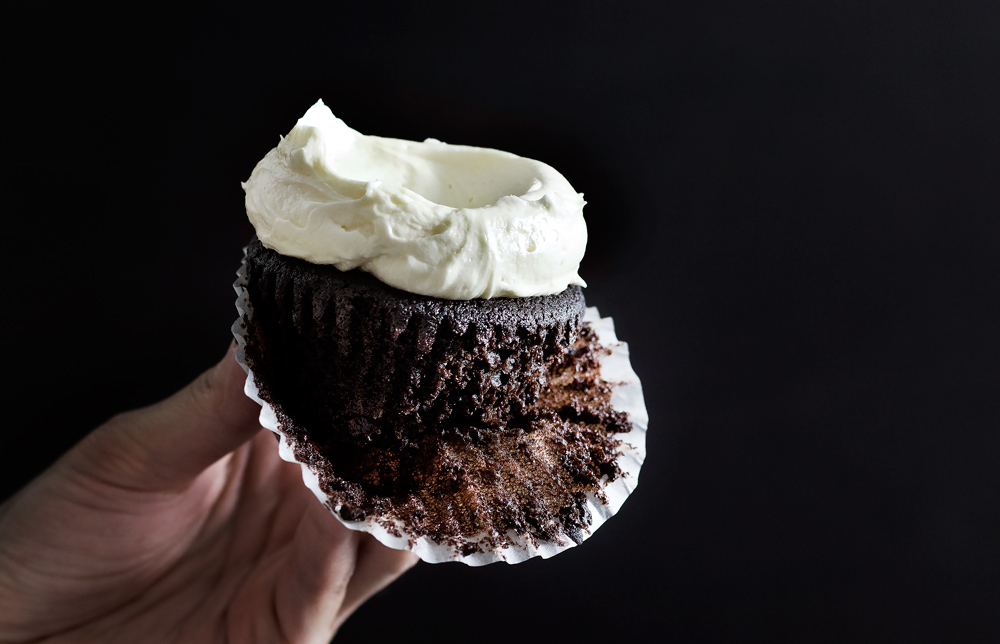 BUT A PROMINENTLY SALTY AND SWEET BUTTERCREAM, REALLY GETS ME EXCITED

THERE are good, convenient reasons why, I’ve never made cupcakes before.

There are things best left unknown, things that, let’s just say, won’t help you enjoy your favourite foods by knowing.  Like the day I peed myself a little when I first poured in all that heavy cream, running as thick as blood, into making my most beloved Hokkaido “milk” toast two years ago.  Oh mommy, it wasn’t milk… it wasn’t milk…  And the same reasons that my fingers and soul trembled when, for the first time, I soiled my naive perception of a brioche dough with a rudely awakening amount of reality-butter.  That stormy night, the brioche was soft, but innocence was dead…  And then so many times after that, the freedom for ice cream was terrorized… and the guiltless-ness of salads wilted away…  Let’s not even go there, where now every time when I gaze upon the starry sheen of a melty crispy and chewy chocolate chips cookie, the rim of fat around my waist reverberates in echo of the truth behind its sublimity…  As a cook, I thought I wanted the truth.

I couldn’t handle the truth. 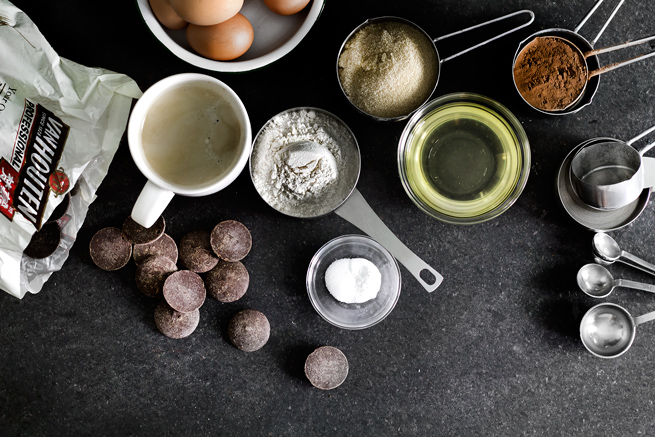 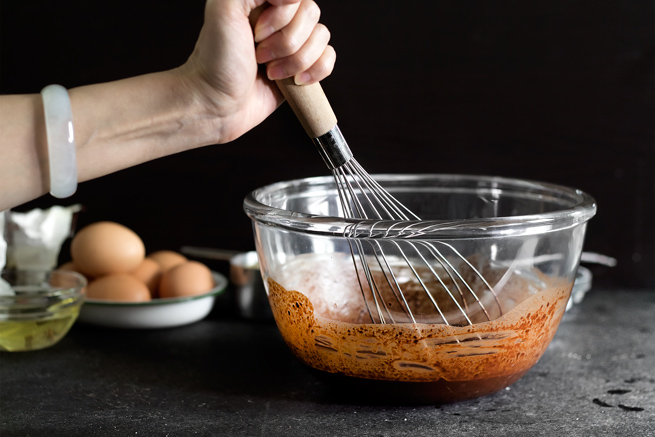 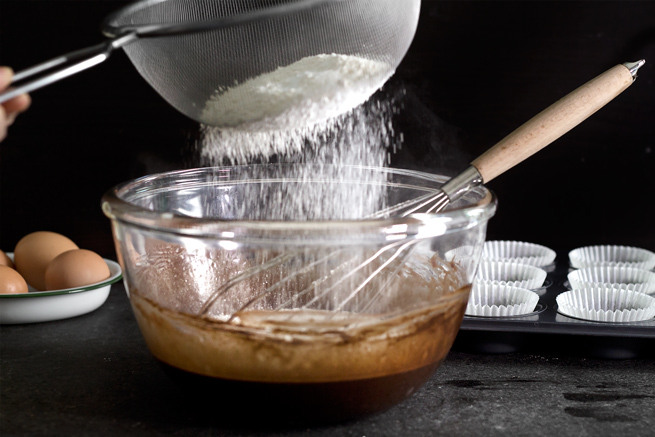 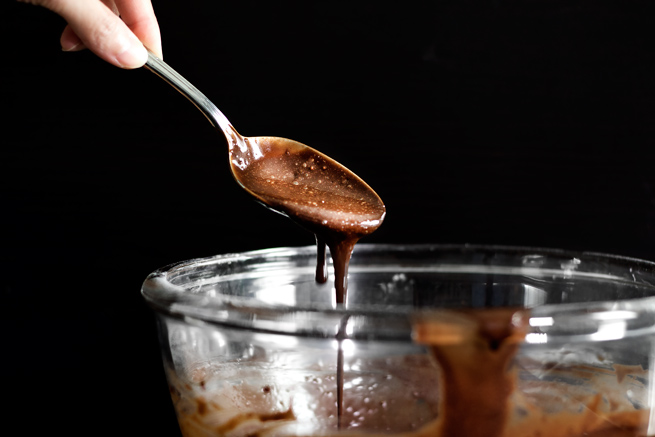 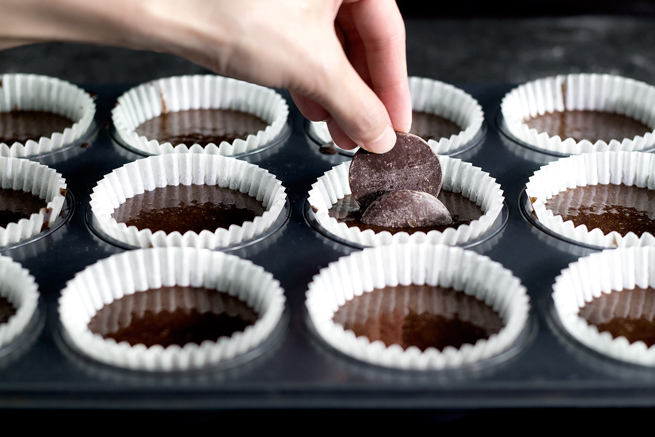 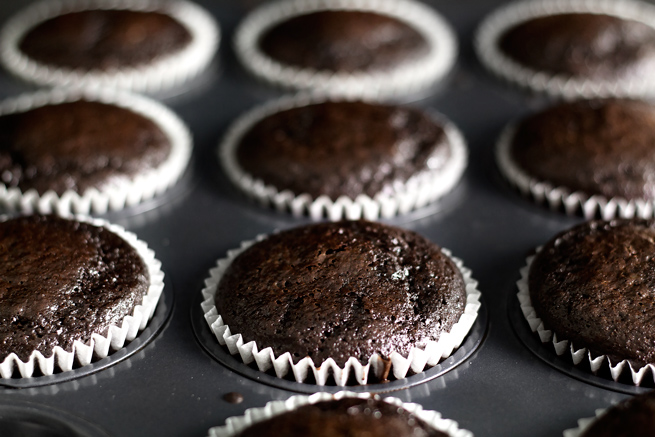 So if you don’t mind, in a world now that I can’t even fucking swallow a good poke without beating myself with a stick, I was planning on keeping the last inconvenient truth at bay, and stay able to eat a bloody cupcake with blissful ignorance.  But I guess, sooner or later, we all have to grow up…

If you’ve been following my lazy instagram, you’d noticed that I’m working on a photography side-project combining food and music, and in the name of professionalism and sacrifice, I’ve let it burn down my last eating sanctuary into a, again, guilt-laden wreckage.  The idea was innocent enough, to come up with a lethal but nonetheless cuddly cupcake in contrast with a badass rock’n roll themed background-poster.  The images, didn’t come out as nicely as I planned.  But the triple chocolate cupcakes with sea salt buttercream, carried out a very successful bombarding campaign on my last defensive cupcake illusion.

OK, chocolate cupcake, while being “tripled” and stuffed, is hardly any news.  But the idea of a prominently salty and sweet buttercream, really got me excited.  Oh buttercream… salty buttercream… hmph, now… what is “buttercream” exactly?  Surprisingly, a quick Googling didn’t land me on any promising “sea salt buttercream” recipe, and just when I was jittering that I might have landed on a less charted territory, I started to absorb the truth of a basic buttercream…

Wait… what am I looking at here?  I thought the word “buttercream” is just an expreeeession, you know, just to mainly convey the idea of the creamy and butter-like texture of the frosting which is in fact, miraculously, made with magical materials based on ancient wisdoms that help us burn more calories?

And as if the shock of buttercream-reality isn’t difficult enough.  Oh my god… sea salt and sugar.  If only they could hate each other enough to give my last standing skinny-jeans a freaking chance, but no, they just have to taste so heavenly sublime and will-bending, especially when whipped into a fluffy cloud of pure butter.  1/2 plus 1/8 tsp of fine sea salt for 2 sticks of butter, the forward savouriness only makes the sugar sweeter, and the butter pop, and my unstoppable pigging-out motion, almost robotic.  Then of course, even for a non-chocolate enthusiast, I’m not saying that the delicately moist and melty-centered chocolate cupcake is completely unblamed for.  Together, they are a full-blown, aiding and abetting criminals that crushed my carefully guarded obliviousness.

I know that I sound like I’m regretting in tormenting happiness, but should you sea-salt your buttercream, too?  Well, the thing about guilt is, it numbs dangerously quick.  Especially, when it tastes this good. 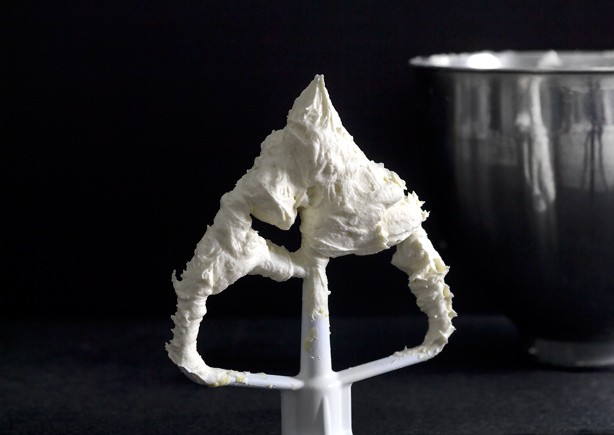 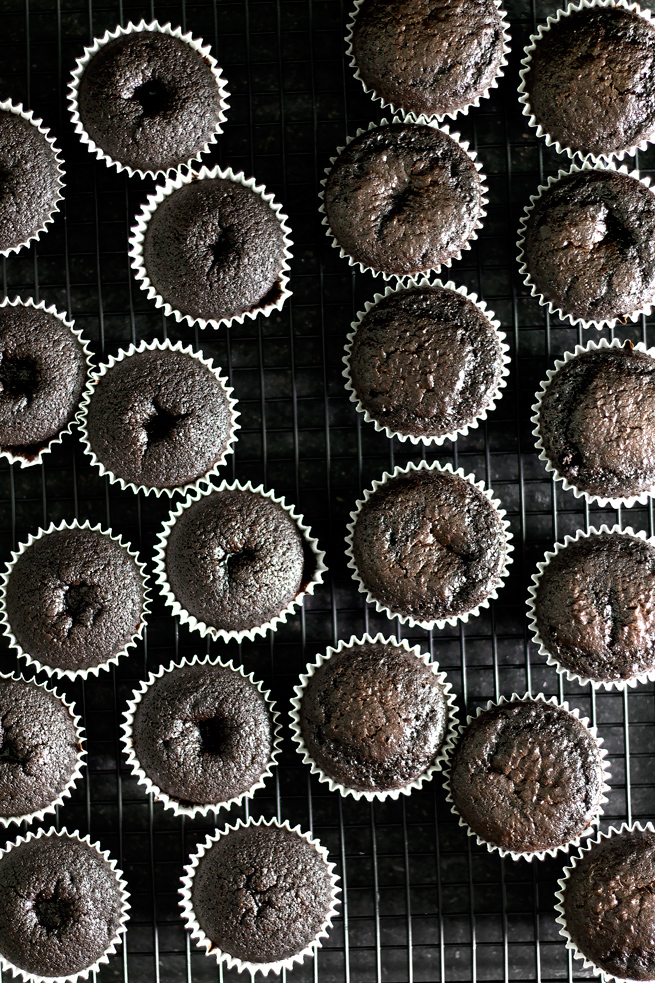 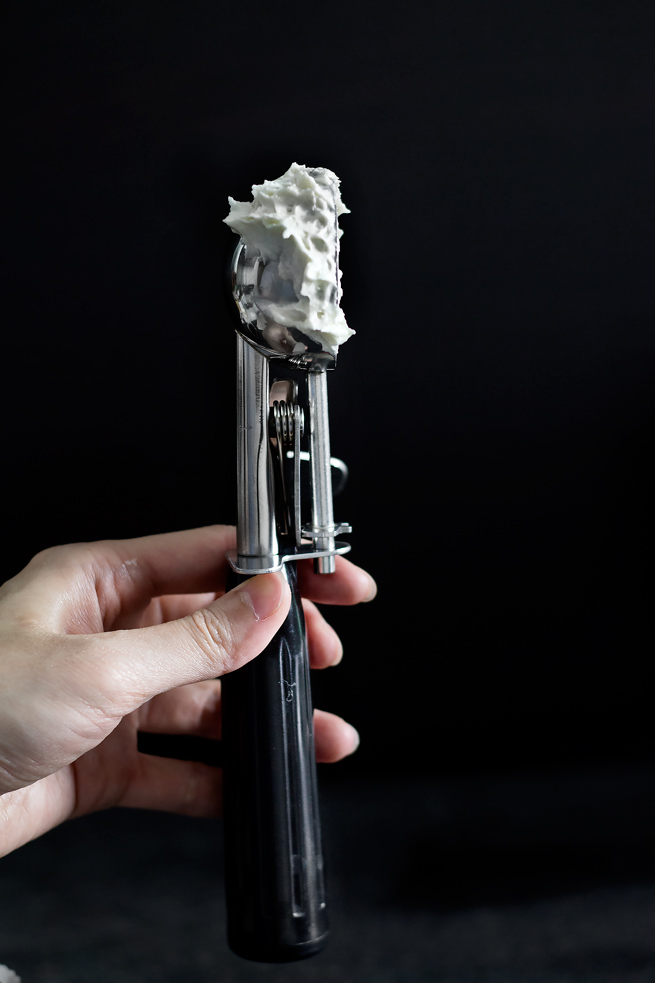 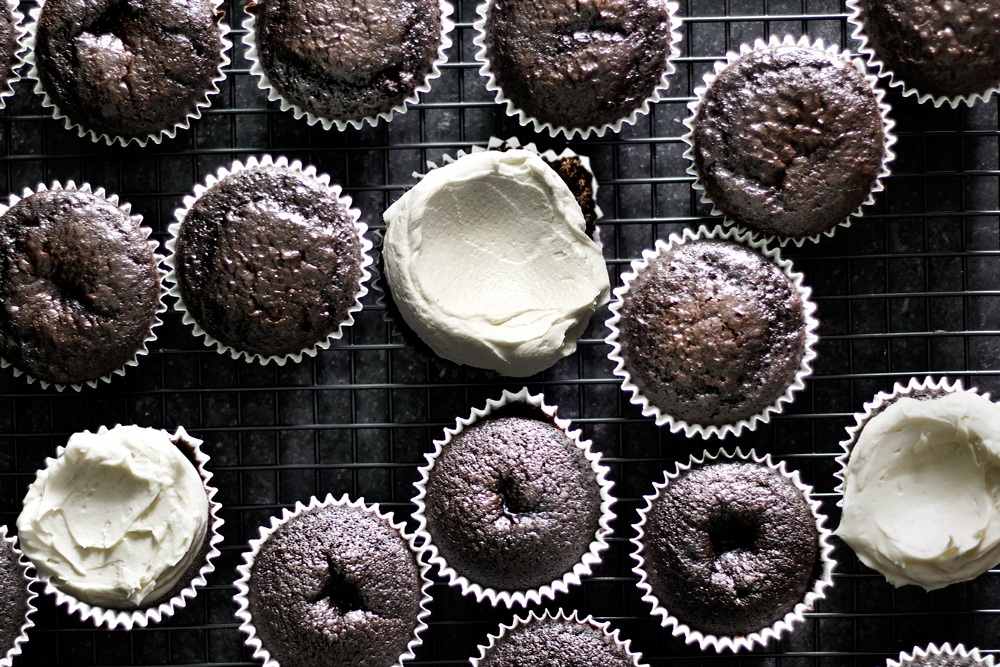 The original recipe uses dutch processed cocoa powder (whereas I used natural) with only 1/2 tsp of baking soda.  It’s supposed to make a dozen cupcakes, but perhaps because of the difference in leavening powder, I found that it was more like 10 cupcakes…  The first time I filled them up to 75% full and they barely rised to meet the edge of the cups.  So the second time I added 1 tsp of baking powder to give it more lift, and filled them up to 80% full.  And got 11 cupcakes out of it.

Then there’s the senseless amount of buttercream per 1 dozen cupcakes…  I found that for recipes that make 1 dozen cupcakes, they usually call for 2 sticks (1 cup/226 grams) of unsalted butter…  I mean, I may be new at this cupcake business, and missing the unspoken rule that you are allowed to eat the extra buttercream by the spoonfuls after all the hard work you put in… but for the sanity in me I just couldn’t see how to possibly use up all those buttercream for just 12 cupcake!  But I abide to the rule anyways, just to be safe…

Add bittersweet chocolate and cocoa powder in a large bowl, then pour in the hot coffee.  Whisk until the chocolate has completely melted and refrigerate for 10 min to cool.  Then add the light brown sugar, vegetable oil (or peanut oil for a nuttier flavour), large eggs, white vinegar and vanilla extract.  Whisk until smooth and velvety.  Sift the flour, salt, baking powder and baking soda directly into the bowl through a large sieve.  Whisk just until evenly incorporated.

Divide the batter into 10 to 12 cupcake-holder, filling each up to about 80% full.  Drop 2 tsp of milk chocolate chips (or nutell) into the center of each cupcakes, then bake in the oven for 17~19 min until a wooden skewers comes out clean from the side.  Let cool completely on a baking rack before applying buttercream.

To make the sea salt buttercream:  Saltiness of sea salt may differ, so add 1/2 + 1/8 tsp first, then a pinch more if needed.  Make sure that you use extra fine sea salt (not the flaky/coarse kind) so it dissolves nicely into the buttercream.  If you can only find flaky/coarse sea salt, you can either pulverize it in spice-grinder, or melt it into the heavy cream first over gentle heat, let cool completely, then add it in the last step.

In a stand-mixer with pedal-attachment, or in a food-processor, add the unsalted butter and fine sea salt then whip until light and fluffy (takes a bit longer in a stand-mixer).  Add the vanilla extract and 1 cup of powdered sugar at a time, whip until smooth before the next addition of powdered sugar.  Then finally, whip in the heavy cream to loosen the texture (you  may need more if you prefer softer buttercream). 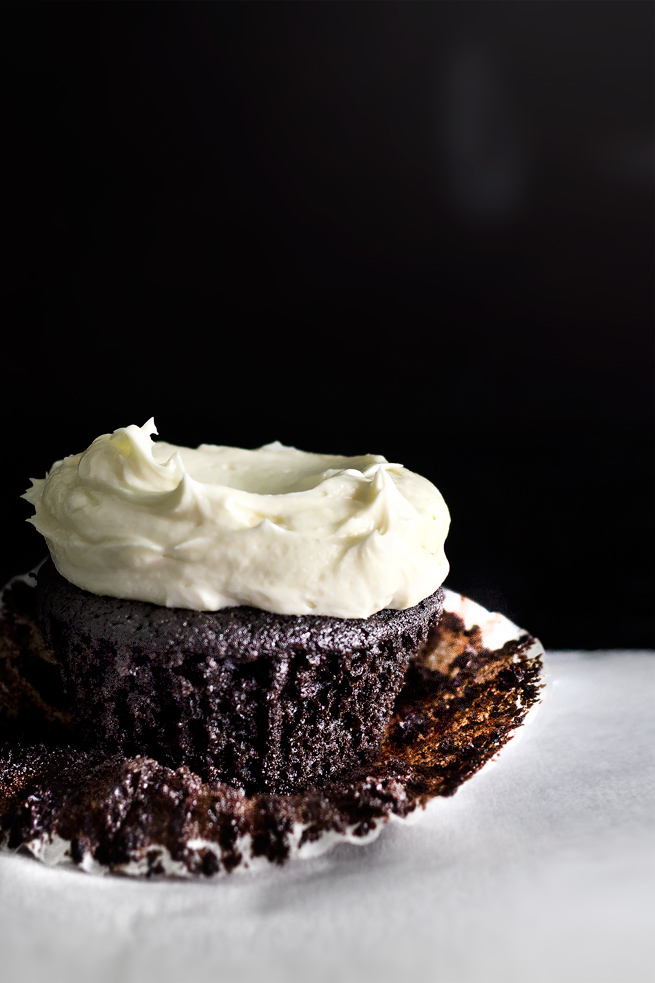