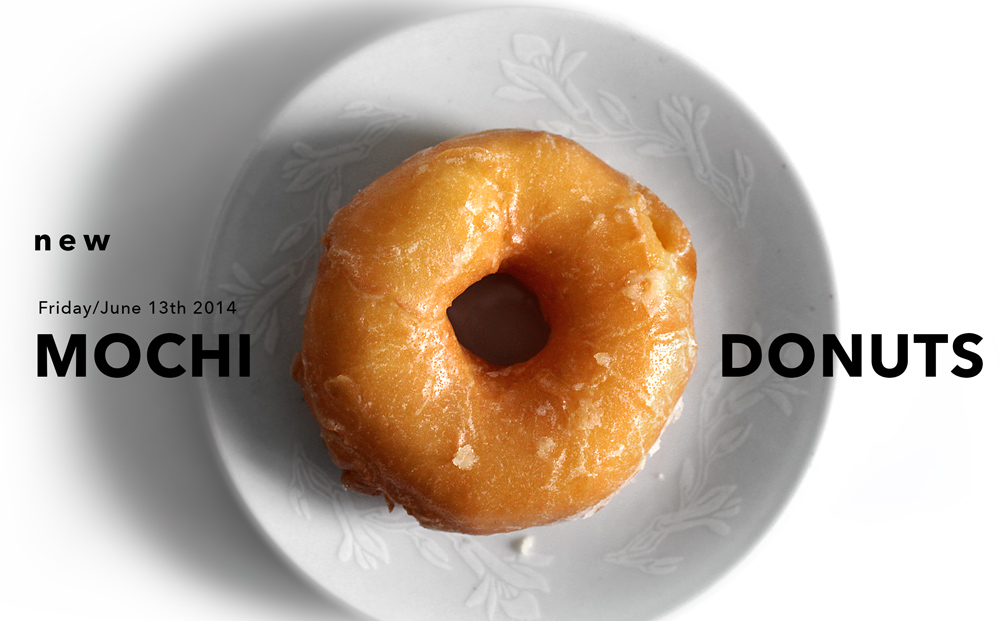 ” YOUR SKINNY JEANS
WILL SELF DESTRUCT IN 30 MIN.

THIS, may come as a surprise to hear.  Or not… judging from how you rationalize things.  Well, let’s just say based on the look of things on this blog, this will come either as a gasping surprise, or, as the most obvious conclusion to any.  But what I’m trying to tell you, and this is a true story, is that every night before I go to sleep, the ever-last thought that I’m either saying or thinking before drifting into oblivion is alway this…

It’s true.  You see the thing is, I’m a side-sleeper.  And side-sleepers feel things.  Things that, with all due respect, back-sleepers wouldn’t necessarily feel so bluntly and graphically and that is, the horror upon realizing that my gut can move freely in 180 degree angle, and rest soundly on the mattress like a soft pouch of cottage cheese.  Did you know this about my gut?  Why am I always the last to know…

I’m telling you this because I want you to know that I am not beyond reasons.  I’m aware of the normal shape of things for a humanoid, and I have acknowledgement of the ancient nutritional pyramid built by aliens to assist mankind, I swear.  There was a lemon-olive-oil-pasta-thingy that was supposed to be here today to demonstrate that I’m well-balanced and eat vegetables.  I don’t know what happened to that.. maybe because, purely guessing, that it didn’t taste as good as this donut.

Right, this is a baaad donut.  A very gooood, bad donut.  I had a sun-dress that just arrived in mail and I got very angry at it, if you know what I mean.  And you would believe me when I say that I would not surrender my prospect into a spaghetti-strap sun-dress this summer, just over any donut, wouldn’t you?

No, no I won’t, because this is not just any donut. 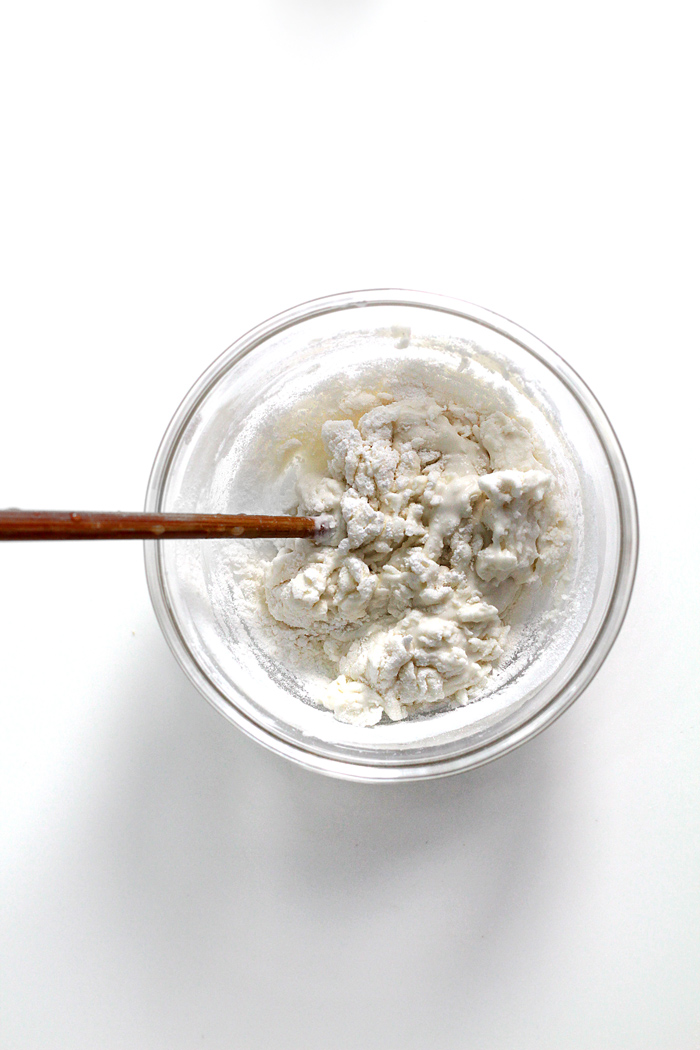 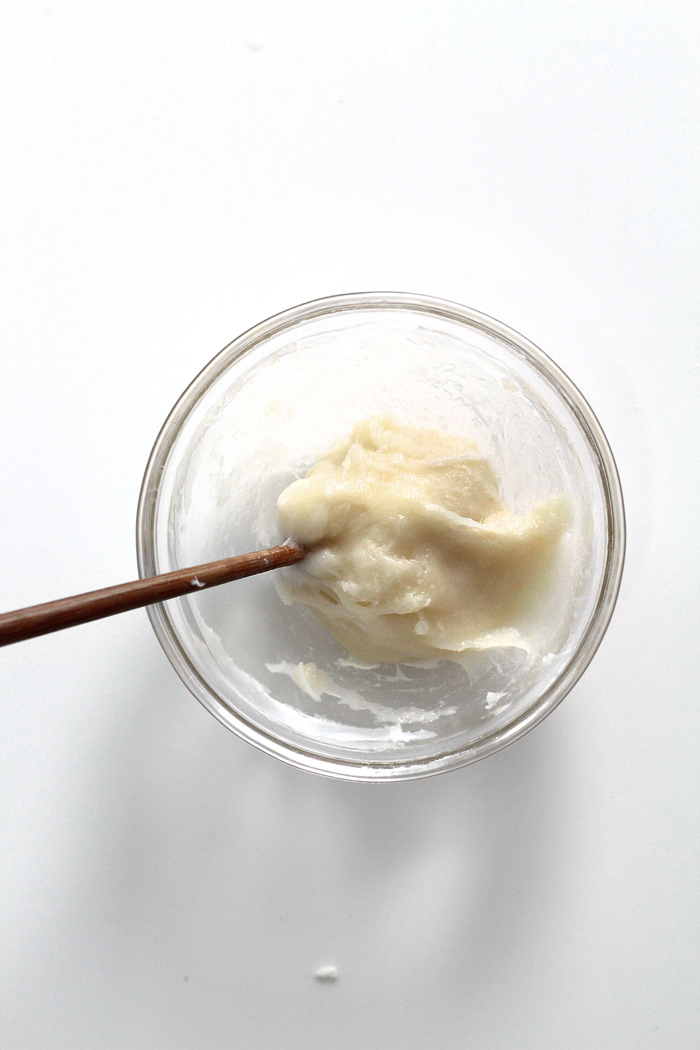 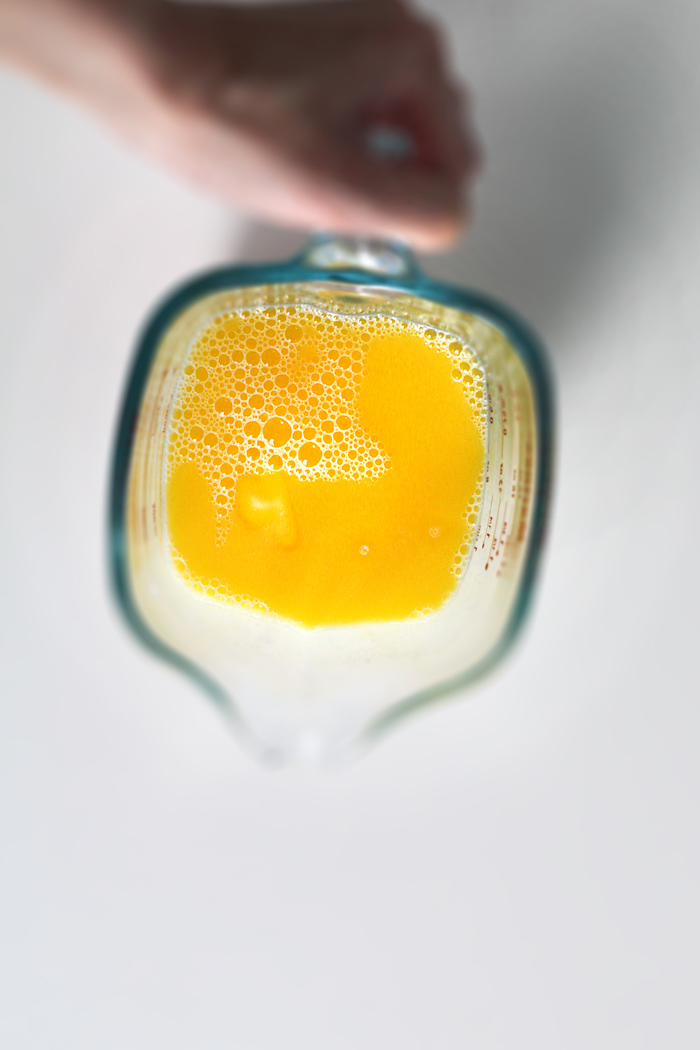 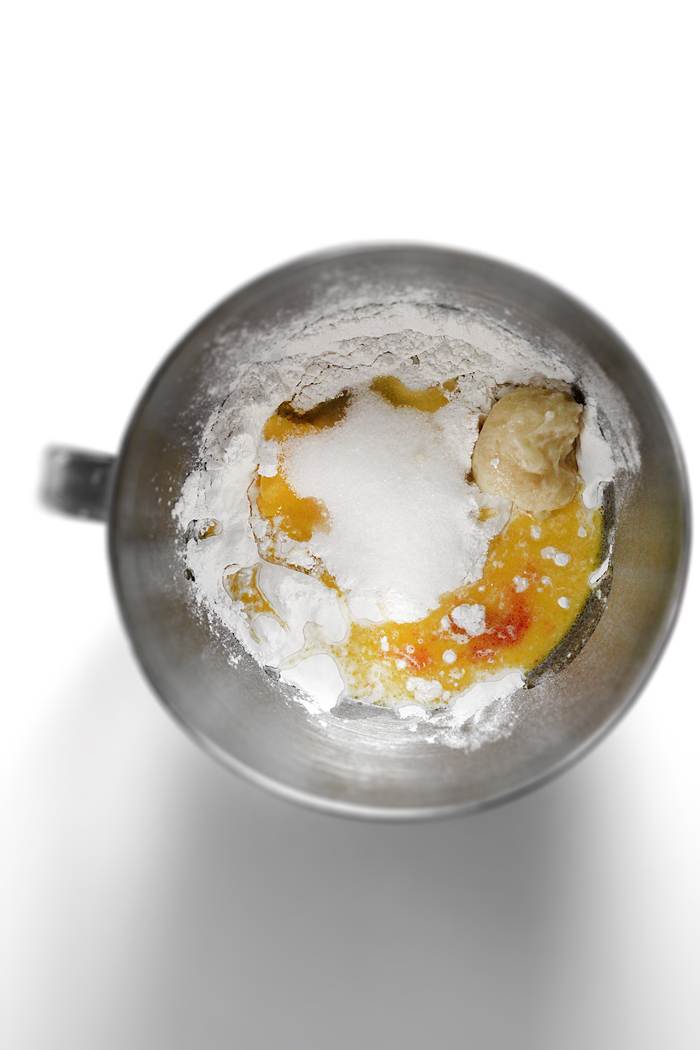 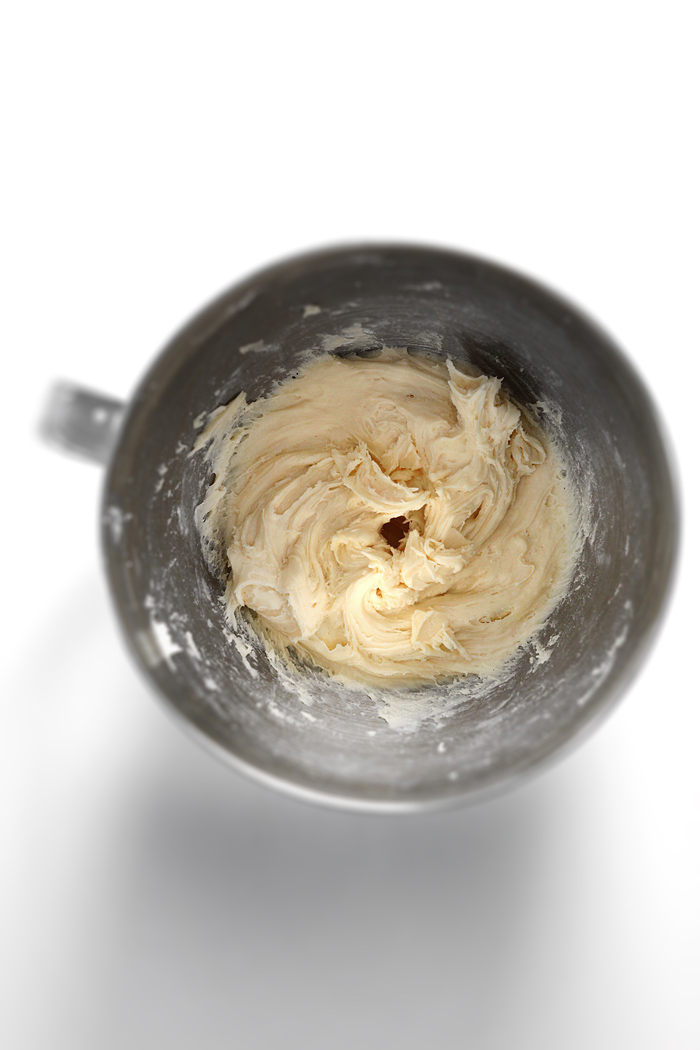 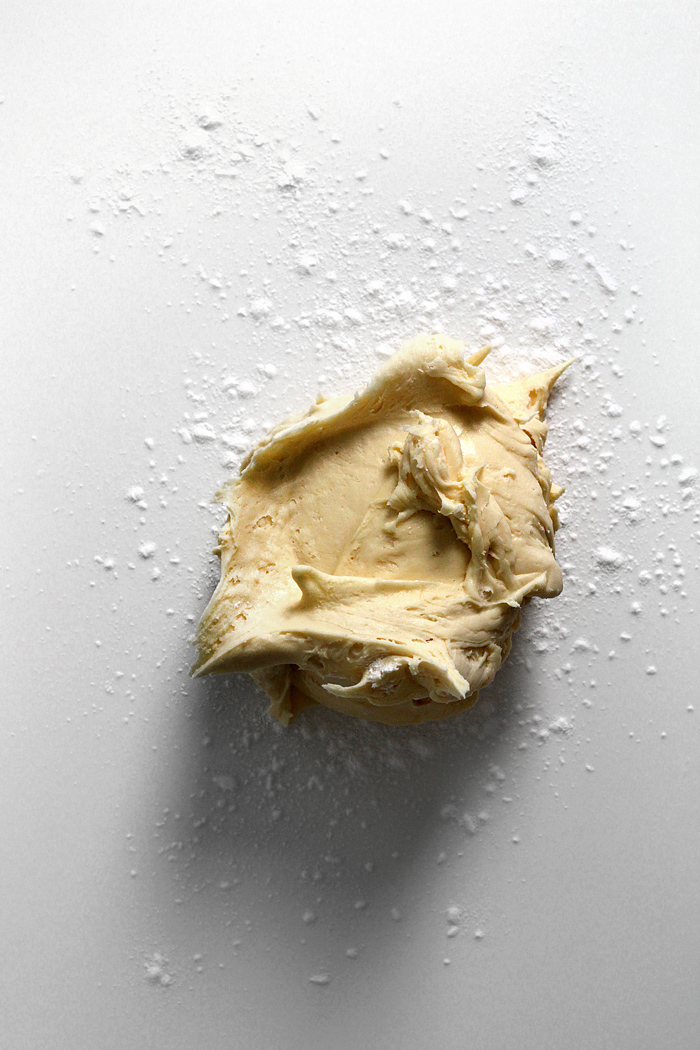 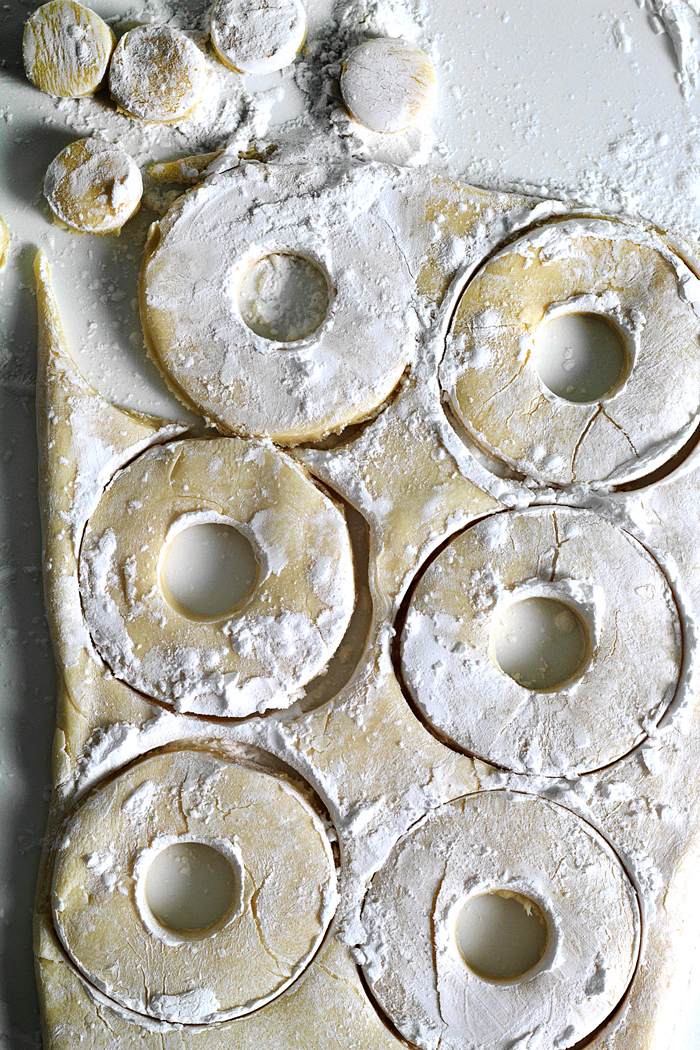 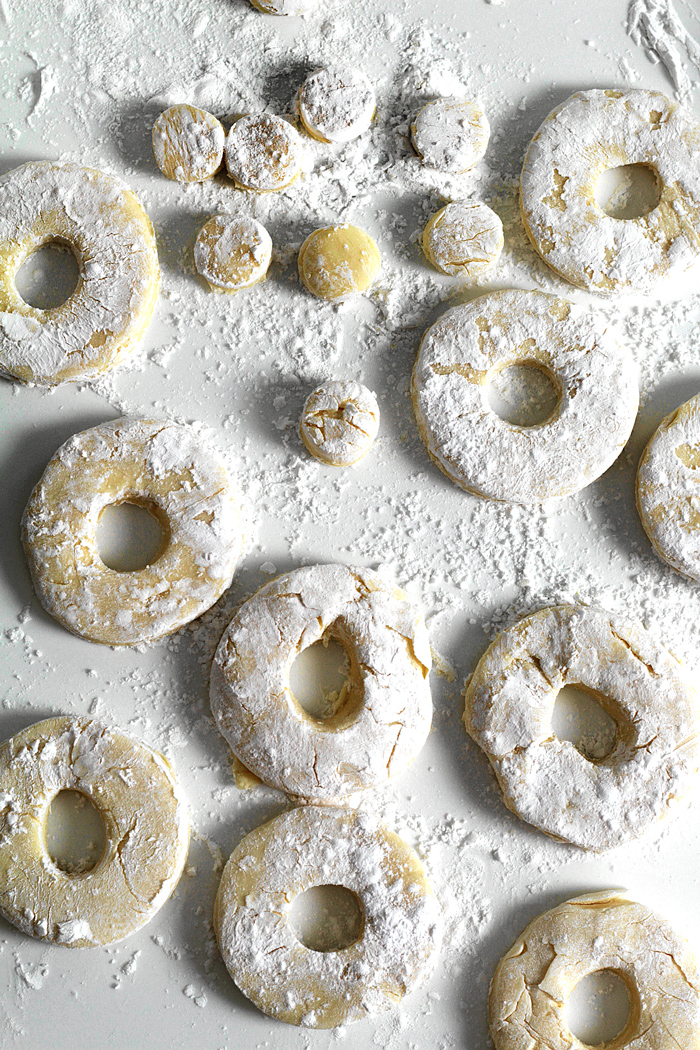 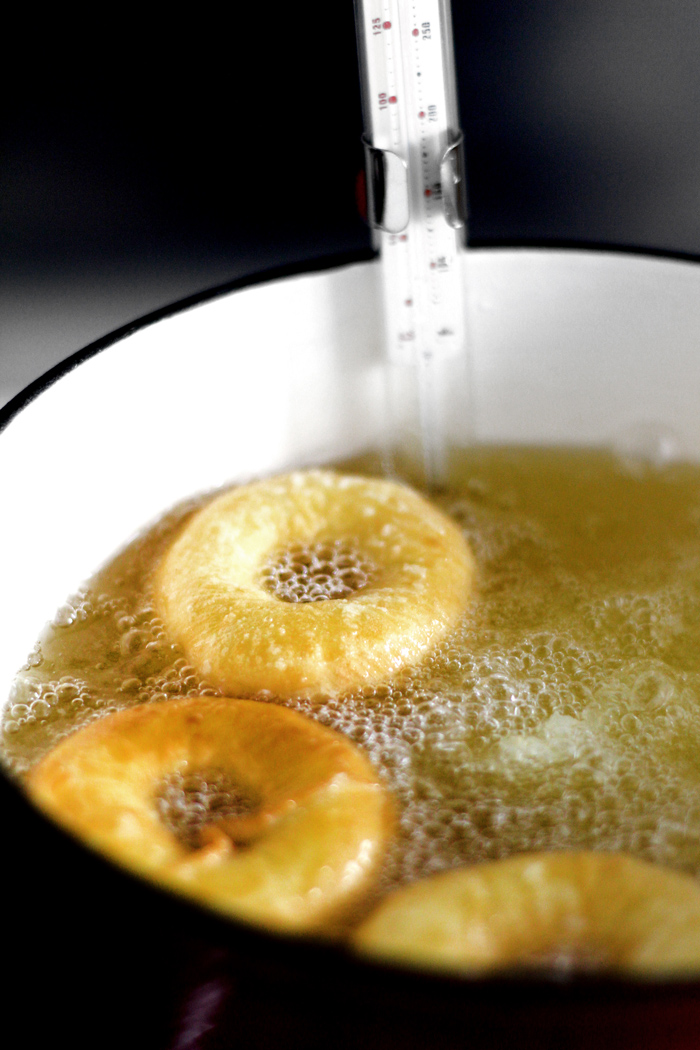 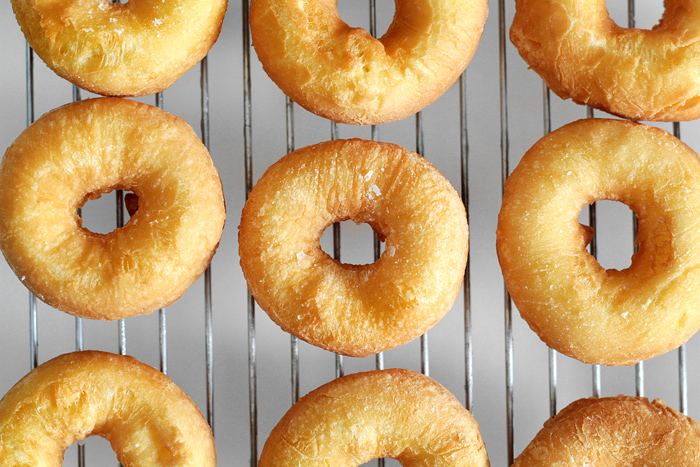 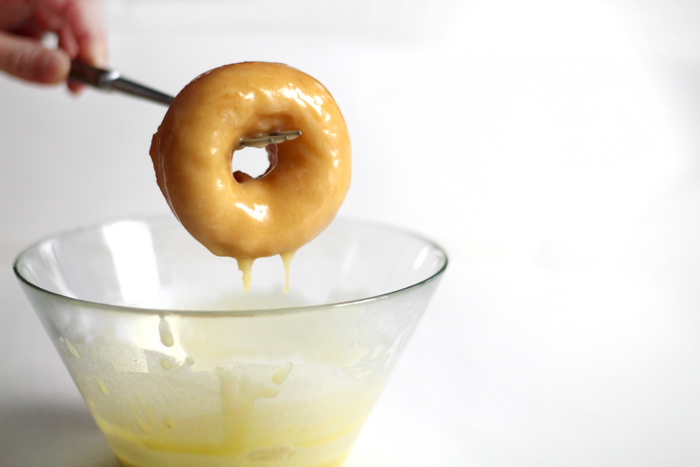 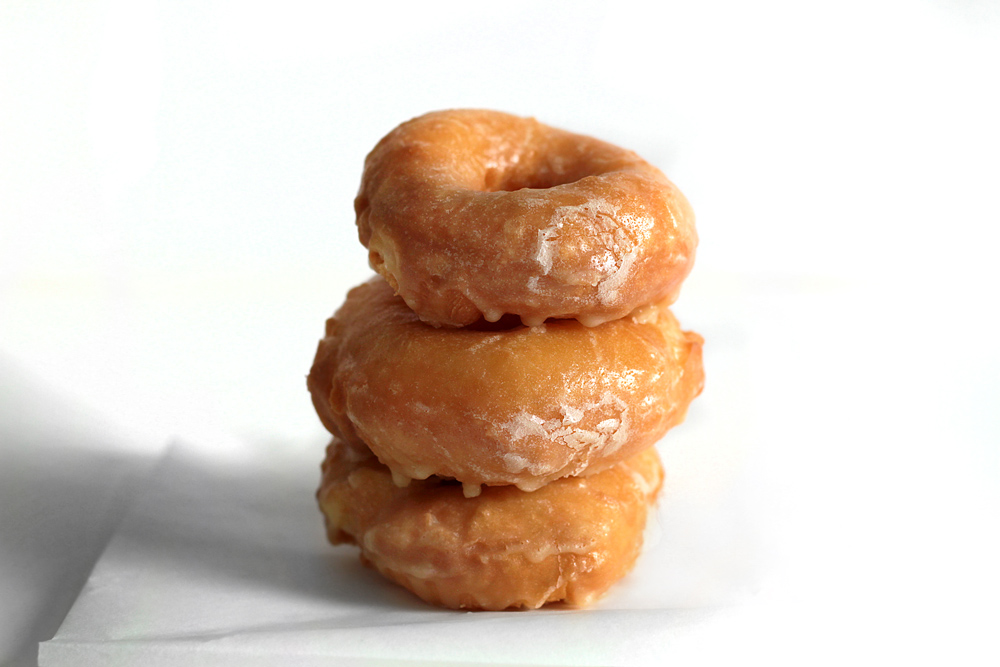 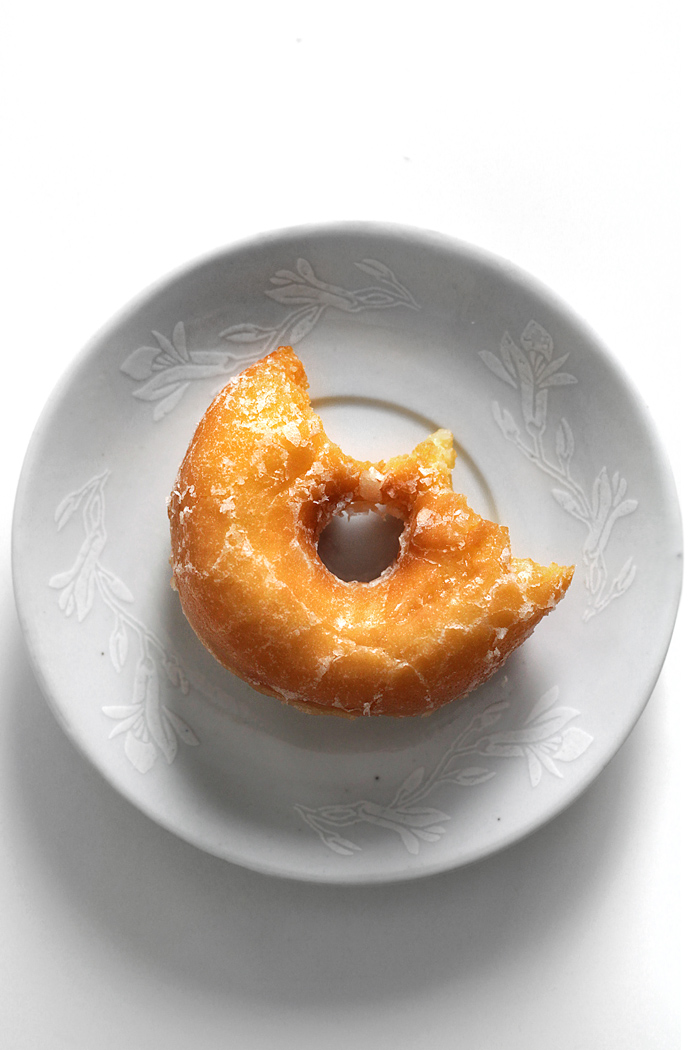 What is mochi?  And why does it have to be a donut?

If you don’t know the answer to that, you still have a chance to walk away cleanly…  Just walk away…

For the rest of you brave sinners, mochi is an Asian sweets made with sticky rice/sweet rice flour.  It comes in many forms and sizes but whatever they are, there’s only one true reason why we love it the way we love it.  We are after its distinctive, soft and chewy texture that is unlike what any other flours can ever achieve (tapioca flour, in this donut, produces a similar texture but not the same).  I have made it quite obvious in the past that when it comes to mochi, I could be quite unreasonable…  But I admit, this is a new low.  What makes this mochi donut so dangerous is how fast, easy and effortlessly addictive it can be.  This is not a yeast donut (that takes a long time but has a good chew).  This is not a cake donut either (that takes less time but has no chew).  This is not even those fake “mochi donuts” that are simply soft mochi being formed and cooked or baked in a donut-mold.  I don’t think I need to explain the difference between a non-fried mochi, and a deep-fried mochi, do I?

This donut does not require any proofing, resting, or any knowledge you’ll have to go to Dunkin’ Donuts College for.  This is a sticky rice flour-dough that you can make in under 15 min, which will fry into golden-browned and gorgeously puffed real donut, that has soft and chewy interior with slightly crispy exterior.  It has the structure and interior holes almost like a good yeast donut, but better.  More perfect.  And when a donut is this good, it requires nothing but a simple, basic glaze

There is literally nothing, no more words I can put into describing how much I love this donut, as well as my apology to you.  I’m sorry.  Your skinny jeans will self-destruct in 30 min, but unfortunately, this message won’t. 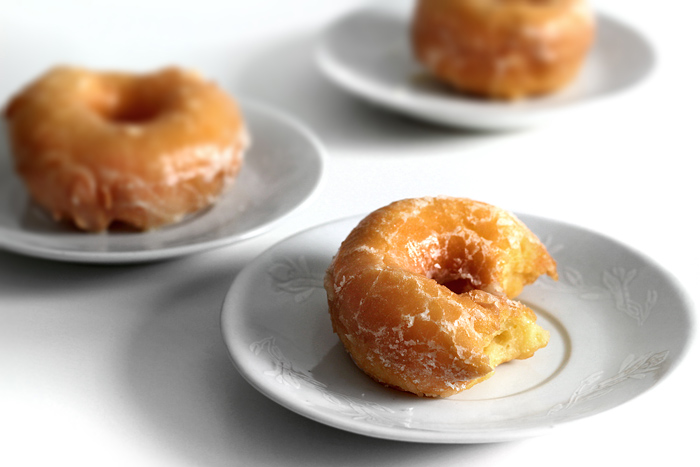 If you have never worked with sticky rice flour (or sweet rice flour), it helps to keep in mind that it’s actually gluten-free, which means that the flour in its uncooked-form will not “bind” with water.  Purely mixing sticky rice flour with cold water will only produce a “chalky” and “crumbly” dough that can be hard to work with.  That’s why a starter-dough – which is basically a portion of the dough that is pre-cooked – is needed in order to form a cohesive, “stretchable” dough.  It sounds complicated but is in fact, ridiculously straight-forward.  Simply nuke it in the microwave for about 1 min, and there’s your starter-dough.

I would also suggest keeping the frying-oil at about 330ºF/165ºC, and maximum 350ºF/175ºC.  Oil that’s too hot will burn the exterior of the donuts before they have a chance to puff up and cook properly.  If you’re using a cast-iron pot, you may even need to turn off the heat at some point.  Test the oil with the donut-holes when in doubts.

Update 2014/08/13:  For people who have trouble with the starter-dough being too stiff and lumpy, and not blending into the final dough properly, I would suggest increasing the milk in starter dough to 3 tbsp, then microwaving it at a 20 seconds interval (instead of 1 min all the way).  Stir to evenly mix the dough at every interval and stop microwaving JUST when the dough comes together into an opaque dough (to prevent over-cooking).  Then take 1 tbsp away from 1/2 cup of milk for the final dough.  Mix the dough together and add the extra 1 tbsp of milk if the dough’s too dry (the dough should be very sticky).

To make the starter-dough:  Mix 1/4 cup of sticky rice flour and 2 tbsp of whole milk together in a microwave-proof bowl.  Microwave on high for 50 ~ 60 seconds until the dough is cooked through, which will look opaque and feel very “bouncy”.  Set aside to cool for 5 min.

To form and fry the donuts:  Meanwhile, add 1 3/4 cup of sticky rice flour, 1/2 cup of milk, melted butter, granulated sugar, egg and baking powder in a stand-mixer bowl with dough-hook (you can also do this by hand but keep in mind that the dough will be sticky and hence a bit messy).  Add the cooled starter-dough and knead the mixture on low until everything comes roughly together, then increase the speed to medium and knead until the starter dough has completely blended into the mixture.  The dough will be wet and sticky, but you should be able to lightly touch it without it glued to your finger.

Scrape the dough onto a surface that’s dusted more sticky rice flour.  Sprinkle just enough sticky rice flour onto the dough to prevent sticking, then roll it into 1/2″ (1.3 cm) thick.  With a well-floured cutter, cut as many donuts out as you can (I just use 1 large and 1 small biscuit-cutter to do this), then gather the scraps and press/knead it back into a smooth dough (without adding too much more flour), and cut as  many donuts out as you can again.  You should be able to get 10 ~ 12 donuts.

Add enough canola oil to a frying-pot to reach 1 1/2″ deep (the bigger the pot, the more oil you’ll need), and set on medium-high heat to bring the oil to 330ºF/165ºC, then turn the heat down to medium-low.  If you don’t have a thermometer, just insert a wooden chopstick into the oil, and if small bubbles form around the chopstick quickly, the oil is ready).  Without crowding the pot, carefully drop a few donuts into the oil, which will sink to the bottom for the first 30 seconds then float back up.  Fry for a few minutes on each side until the donuts are puffed up and golden browned.  Transfer to a cooling rack to drain.

Mix 2 1/2 tbsp of melted unsalted butter with powdered sugar and vanilla extract, then add 2 ~ 3 tbsp of hot water to bring it to a desired glaze-consistency.  Dip one side of the donuts into the glaze and serve within a fews hours they’re made. 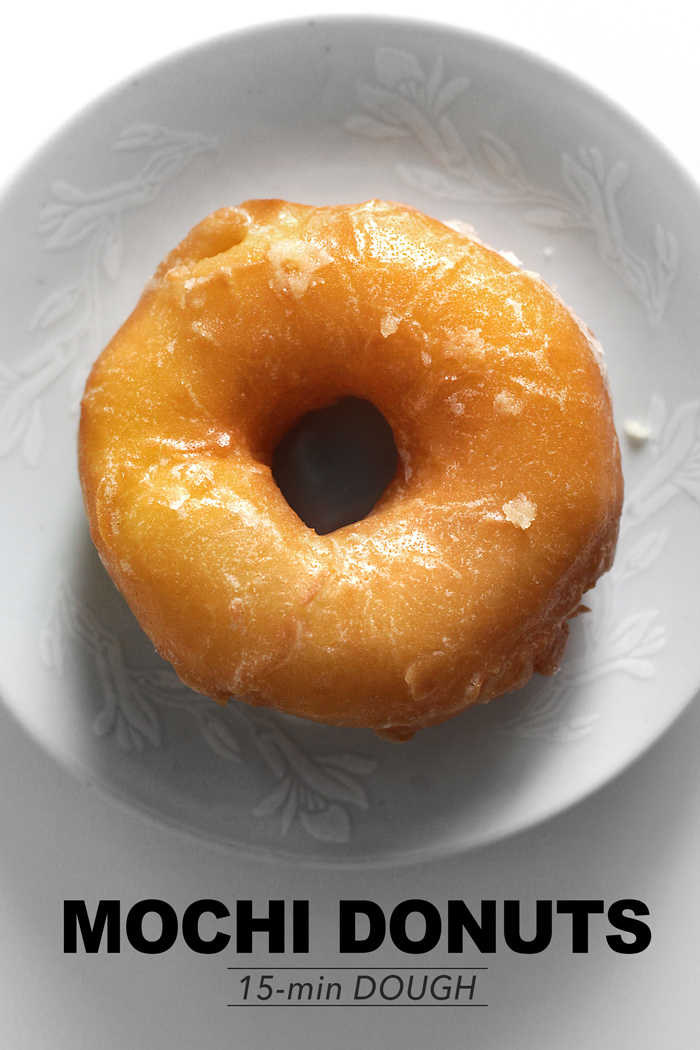 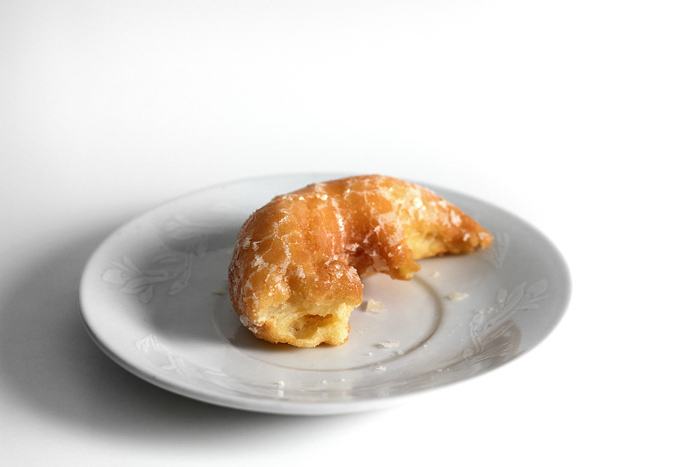 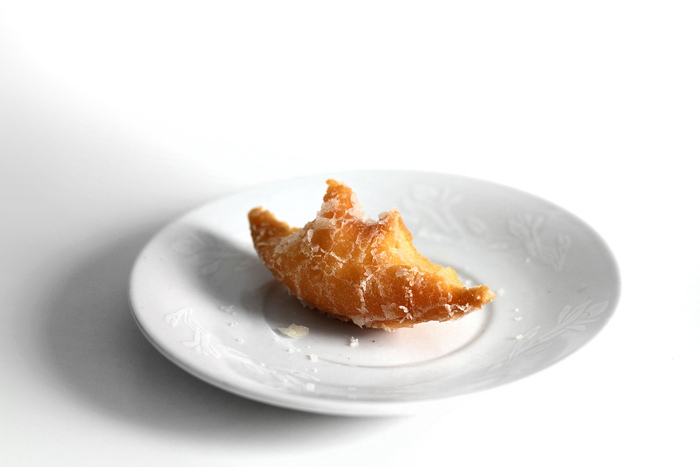 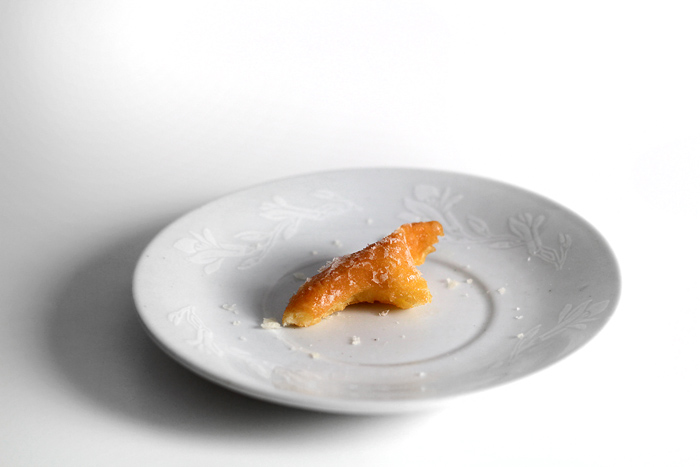